You may already know that the country’s first—and still, I think, only—college program in Secular Studies is at Pitzer College in Claremont, California, founded by the estimable sociologist Phil Zuckerman. (You can see the curriculum here.)

Well, as the Austin Statesman (should they change it to “Statesperson”?) reported yesterday, The University of Texas at Austin has now received a $1 million endowment from a long-time secularist to fund a faculty position in secular research. It’s not a program, nor even a position for a new faculty member, but a lucrative chair for an existing UTA faculty member. And it’s the first endowed chair for secular research at a public university in the U.S. (They may exist in other countries, but I don’t know.) 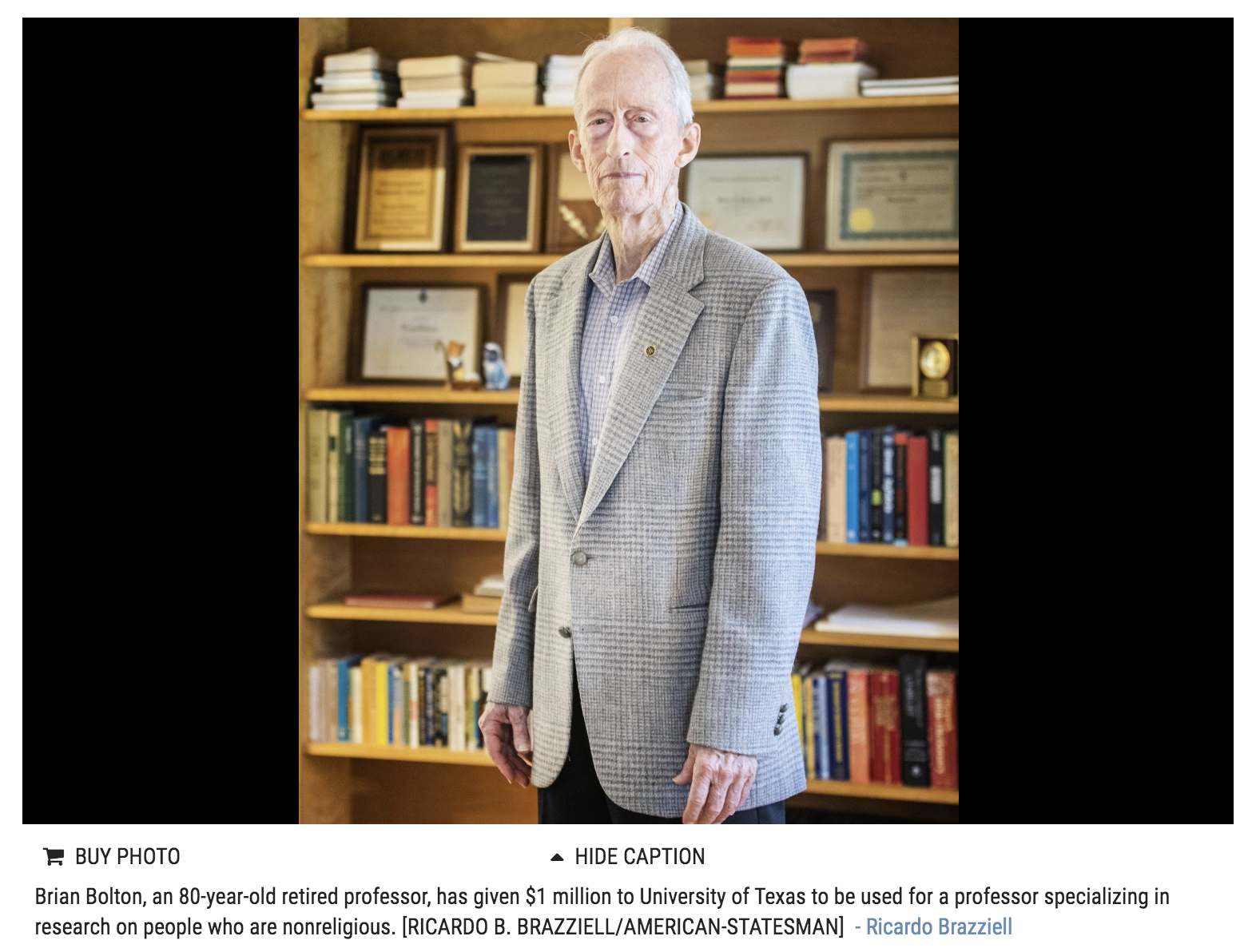 Bolton somehow managed to accumulate a lot of money as a professor, which is unusual but, in this case, useful (he may have been independently wealthy). From the paper:

A Georgetown resident who has never set foot on the University of Texas campus has given $1 million to the school for a new professorship to focus on a growing segment of the U.S. population that holds no religious views.

Bolton said he has never visited UT but shares common values with the educational institution. “My 35-year career was dedicated to scholarship and research in academia,” he said. “I know UT is a great university, and that’s all I need to know.”

Bolton said he wanted to donate the money to make a lasting impact.

What’s curious about this report are three issues. First, a million bucks is enough to endow a new professor, but they’re going to choose somebody already on the faculty. I doubt that there would be someone already there who’s doing “secular studies” in the manner of Zuckerman.

The indented statements are from the Statesman piece:

UT will not be hiring a new professor for Bolton’s endowment but will choose one who is already on the faculty, said Justin Michalka, the executive director of development for the College of Liberal Arts. The university has not yet chosen who that will be, he said.

Second, the University’s director of development is curiously silent about Bolton’s endowment:

Finally, the paper says there’s a university news release on Bolton’s endowment, but I can’t find it (my emphasis):

“During the past two decades there has been significant increase in the U.S. among those who associate with a secular worldview, a trend particularly pronounced in younger people, prompting increased research in this emerging field,” according to a university news release on Bolton’s endowment.

I’m sufficiently cynical to think that they’ve deep-sixed that statement (readers can see if it’s on the Internet), and are playing down the endowment. Perhaps they like the dosh, but secularism, while it may play well in Austin, isn’t particularly popular in the rest of Texas. Or so I think, and I’d be glad to be proven wrong. The reader who sent me the link to the newspaper piece is contacting the reporter to try to find the university statement.

Bolton’s endowment has already been announced by the Freedom From Religion Foundation, which recounts his generous support of their organization—also implying that Bolton has a source of money beyond an academic salary.

Brian Bolton is a longtime Life Member, for whom the executive wing of FFRF’s office, Freethought Hall, is named, due to his support of FFRF’s headquarters expansion. Bolton has also singlehandedly underwritten for a decade now FFRF’s essay contest for grad/older students, with up to $10,000 prize money in total. And he is financing a bible accountability project to call attention to the continuing harm of the bible to society that includes subsidization of the cost of mailing FFRF Director of Strategic Response Andrew L. Seidel’s recent book, The Founding Myth, to every member of Congress last fall. FFRF will be publishing Bolton’s new work, tentatively titled Why the Bible Is Not a Good Book, this year. Bolton, who lives in Texas, will be speaking briefly at FFRF’s annual convention in San Antonio in November.

“Now, the best public university in an immensely important state has a researcher focusing on a woefully neglected segment of the population,” says FFRF Co-President Annie Laurie Gaylor. “And it’s all thanks to Brian Bolton, who has been munificently boosting the secular movement.”

I’ve been to that new executive wing; it’s lovely, and must have cost a pretty penny. Here’s a photo I took when I visited in March of 2018: 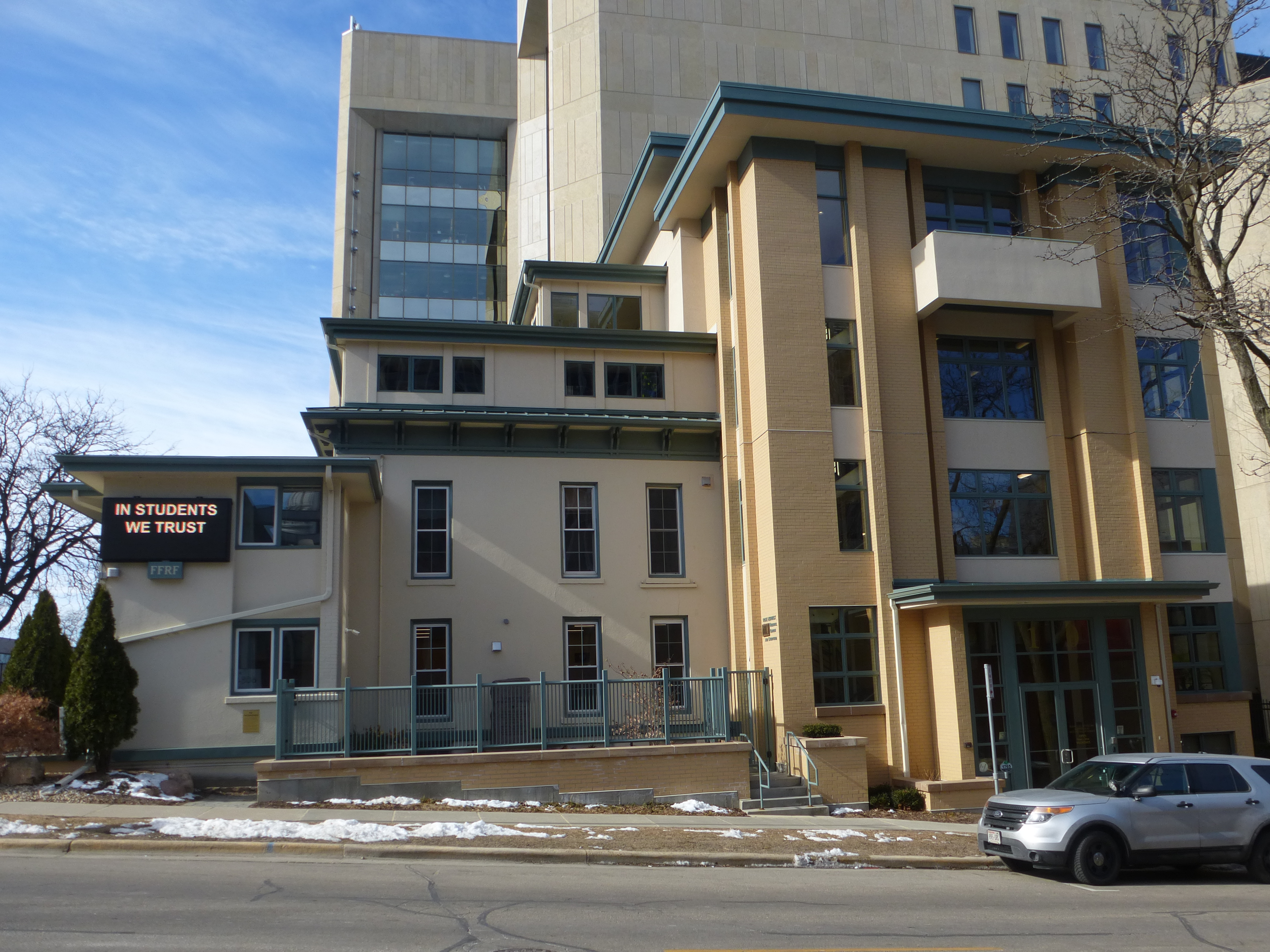 By the way, if you’re ever in Madison, you must visit the headquarters. You can even pose with the life-sized statue of Darwin, as I did. It’s amazingly lifelike: 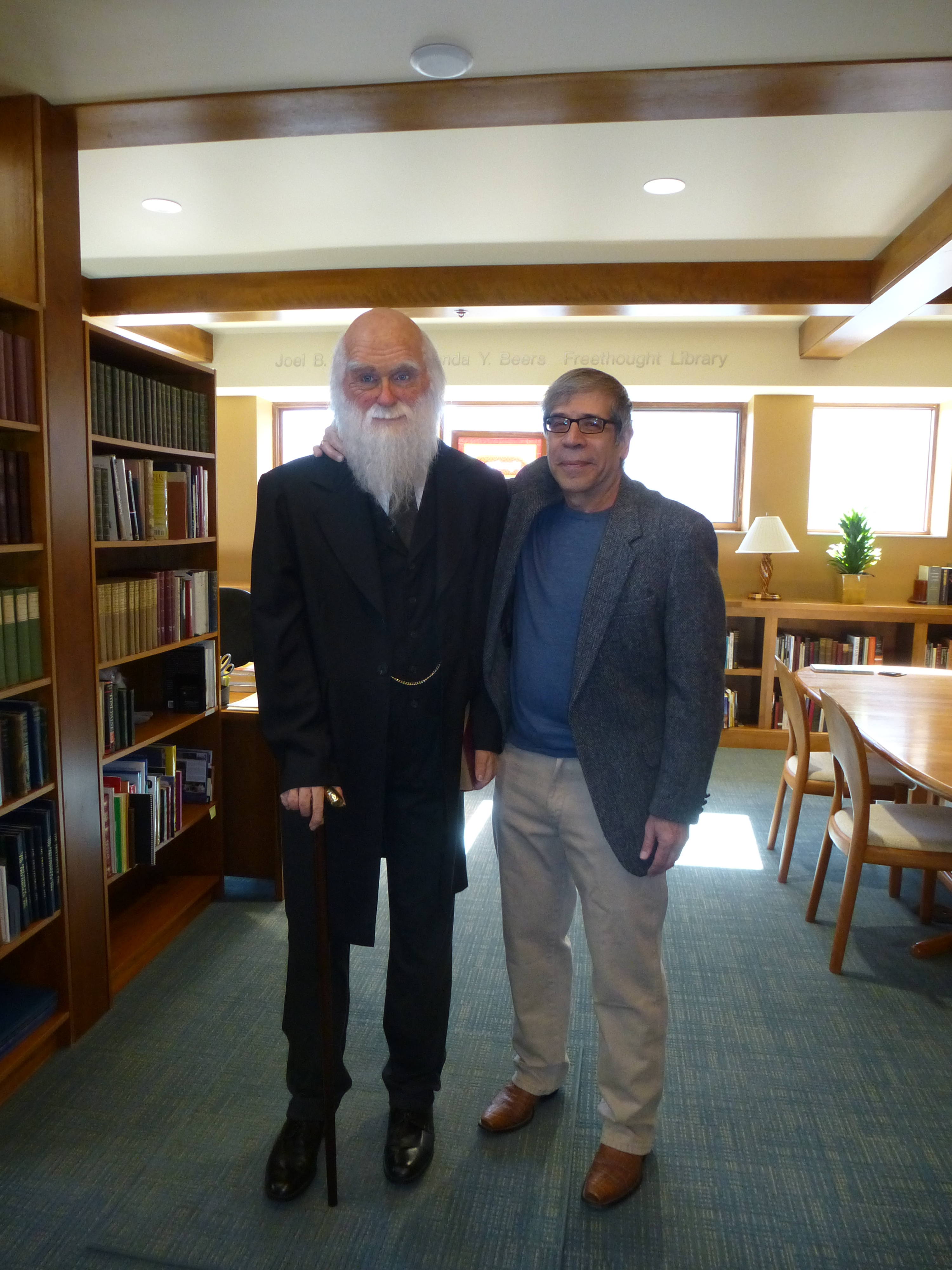 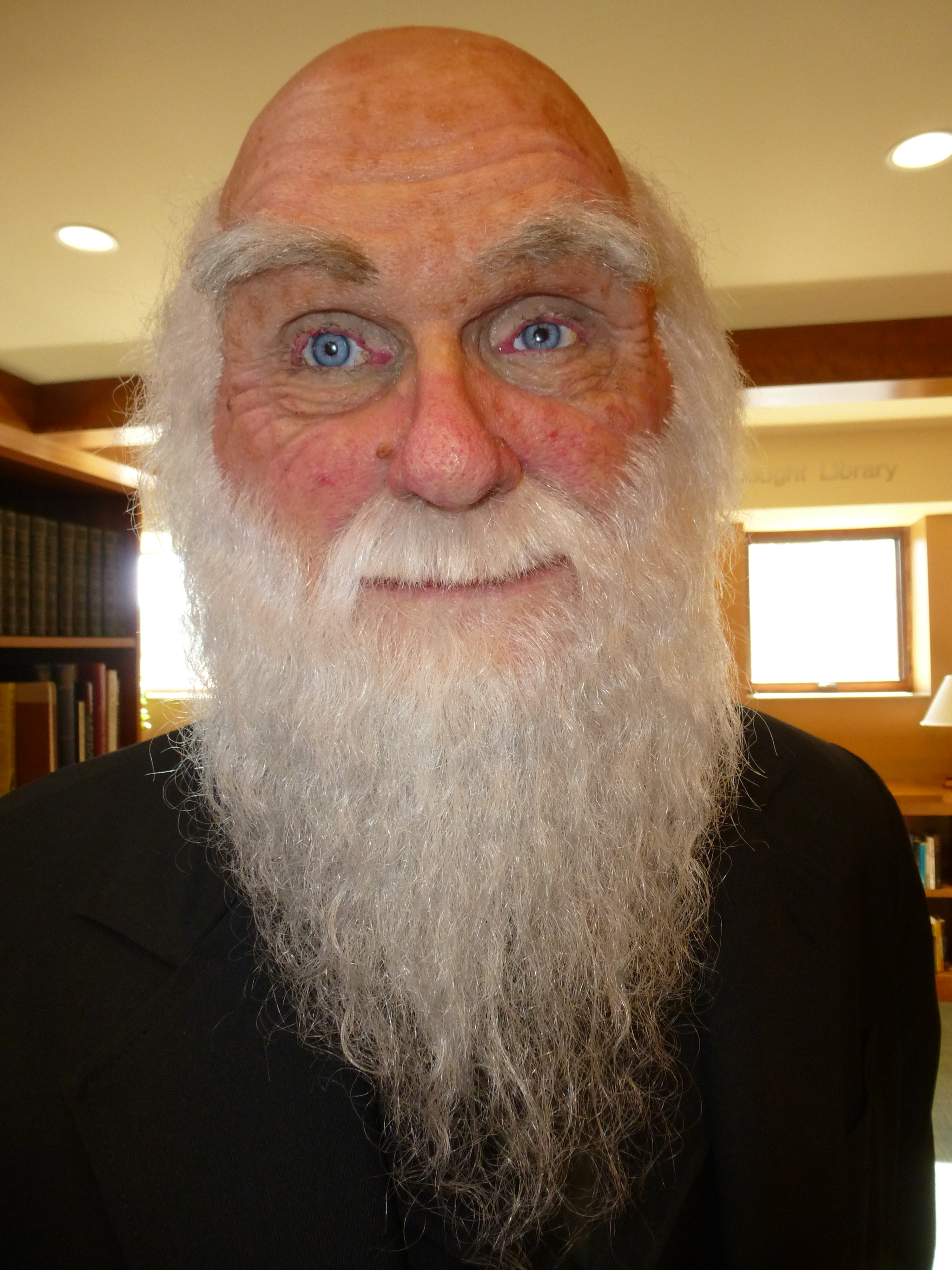 But enough about the money; here’s some more stuff about Bolton from the FFRF:

Bolton is a retired academic psychologist with a background in mathematics, statistics and psychometrics. His contributions in psychological measurement, personality assessment and rehabilitation psychology have been recognized by universities and psychological societies. His 10 edited and authored books include Handbook of Measurement and Evaluation in Rehabilitation, Psychosocial Adjustment to Disability, Rehabilitation Counseling: Theory and Practice, and Special Education and Rehabilitation Testing: Current Practices and Test Reviews. He is a licensed psychologist, Humanist minister, Karate black belt, and Distinguished Toastmaster.

If you want to read even more, nine years ago the FFRF featured an interview about Bolton on its “Meet A Member” feature. A few excerpts:

Person in history I admire: Thomas Jefferson, a brilliant statesman and intellectual whose numerous accomplishments helped establish the robust government under which we thrive today.

A quotation I like: “Religious controversies are always productive of more acrimony and irreconcilable hatreds than those which spring from any other cause.” (George Washington, 1792 letter to Edward Newenham)

These are a few of my favorite things: Supporting animal welfare and environmental protection, reading philosophy and science, writing freethought articles, and raising African leopard tortoises.

How long I’ve been a freethinker: All my life.

Why I’m a freethinker: Even though I attended Sunday school as a child, my soul was never captured. My transition from indifferent unbeliever to outspoken nontheist was brought about by Falwell, LaHaye and Swaggart.

He’s an animal and environment lover, too—a fellow after my own heart! We’re still digging to find out of the University of Texas deleted the announcement of the donation, and I’ll report back.