This story is reported by the Times of Israel, Haaretz, the Forward (which misnames Jordyn as “Jocelyn”), the Jerusalem Post (click on screenshot below) and other places, but not in the mainstream press, or even in Lefty clickbait sites like Salon or HuffPost.  It’s just one more instance of the anti-Semitism spreading on college campuses, but this time in Canada instead of the U.S. 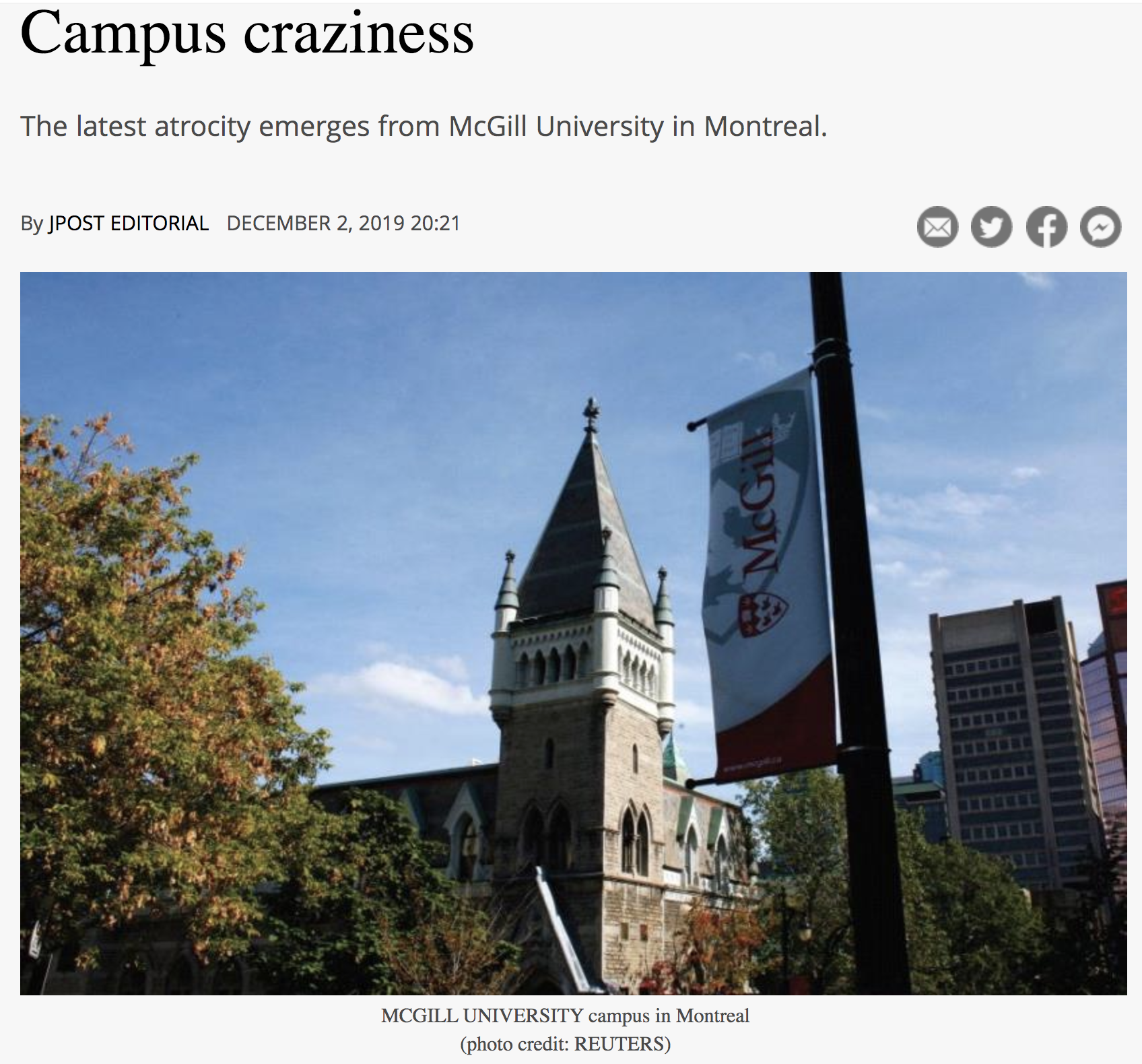 What happened can be stated in brief: a student at McGill University, Jordyn Wright, also a member of McGill’s Students’ Society (SSMU) Legislative Council, and on the board of directors of that Society, was, as the Post reports, “invited to participate this month in a Hillel-sponsored trip to Israel and the Palestinian territories called ‘Face-to-Face.’” Because of that trip, the council demanded that she either deep-six the trip or resign from the organization.

On Friday, the university’s legislative council passed a resolution calling on members of student leadership to decline “gifts that may create an appearance of a conflict of interests.” Posting on Facebook, Wright wrote that the council “voted to give me an ultimatum: either I withdraw from the trip, or I resign from my position. If I do not resign, I am being implicitly threatened with impeachment upon my return.”

What the “conflict of interest” is is obscure, but I suspect that it’s a conflict between Wright’s interest in Israel and the student council’s dislike of Israel.

A post on the Hillel Montreal public Facebook page includes a pretty damning statement by Jordyn detailing the harassment and discrimination she and other Jewish students have experienced at McGill. It seems pretty horrific. Here’s a small excerpt (my emphasis):

This winter break, I have decided to participate in a trip called Face to Face that is being offered by Hillel Montreal, an organization that I have been involved with since I first arrived at McGill. The trip entails visiting Israel and the Palestinian territories to meet with politicians, journalists, and locals from all sides to better understand a very nuanced geopolitical conflict. As a Jew, my connection to Israel is a core aspect of my identity, and I hoped that this trip would help me to experience Israel through a new lens.

As a result of my decision to participate on the trip, last night, the SSMU Legislative Council voted to call for my resignation from my positions in student government. The SSMU President personally singled me out, and actively encouraged others to attack me. Only I was targeted, despite the fact that another non-Jewish Councillor will also be joining me on the trip. I am outraged and disgusted, but not surprised. This is not the first time that Jewish students at McGill have been bullied out of student government.

I have also been subject to attacks by members of student government in my own faculty. At Science’s General Council last week, I was blindsided and interrogated on-the-spot for almost two hours about my participation in Hillel Montreal’s trip. Not only were the questions designed to target and intimidate me, but I was purposefully prevented from having sufficient time to find the information they wanted.

This week, the Science Executive Committee also voted to give me an ultimatum: either I withdraw from the trip, or I resign from my position. If I do not resign, I am being implicitly threatened with impeachment upon my return.

. . .I am proud to be Jewish. Israel is the country with which I identify my heritage and culture, and I am lucky to call it a second home. My personal views do not preclude my sympathy for the continued suffering of the Palestinian people. I never hid my identity when I ran for my position. I am an open book, and Judaism is an integral part of who I am.

McGill’s student leaders consider themselves to be champions of equity, inclusivity, and diversity. I am appalled that McGill politics continues to exclude and discriminate against Jewish students.

It is time to end this pattern of anti-Semitism deeply embedded in the SSMU that continually targets Jewish or Zionist students year after year. We must demand better of the people we elected to serve us.

I am Jordyn Wright, and I will not resign.

What makes this anti-Semitic is that her supposed approbation for Israel, as instantiated by this trip, was sufficient to prompt calls for her resignation. Would a student visiting Palestine be similarly ousted? I don’t think so.  What’s more, and what’s more damning, is that another non-Jewish student, and also on the same Council, was scheduled to go on the same trip but was not asked to resign (see bolded bit above). That’s a clear indication that Wright was being singled out because she was Jewish. And that’s anti-Semitism.

I’m appalled by this, but it’s not that uncommon in the U.S. This year, for instance, the student leaders in the Williams College Council refused to give student group status to a pro-Israel organization (WIFI), simply because they were pro-Israel. The College administration had to do an end run around that to force recognition of the group. One of the hallmarks of anti-Semitism, as Jordyn notes, is to demonize someone for supporting Israel, which is simply pro-Zionism. And even McGill’s student society abides by that definition:

SSMU passed the International Holocaust Remembrance Alliance (IHRA) definition of anti-Semitism, which includes that holding Jews accountable for the actions of the Israeli government or holding Israel to a double standard is anti-Semitic. By scrutinizing only me for participating in a trip to Israel, SSMU is engaging in this kind of anti-Semitism by assuming I have to be held accountable for what the Israeli government is doing.

I dont think that SSMU has a valid counter to that point!

O Canada—et tu McGill? I’m frankly a bit surprised that a good Canadian university would participate in these shenanigans. But on the plus side, a reader sent me a response from McGill’s Deputy Provost, defending Wright in no uncertain terms. I reproduce it below.  (There’s a French version too, of course.)

This message is sent on behalf of Fabrice Labeau, Deputy Provost (Student Life and Learning).

Dear members of the McGill community,

In recent months, we have seen increasing polarized debate among some members of the student community and student associations on political issues, particularly regarding the state of Israel.  While our University fully respects freedom of speech, it is also committed to maintaining a respectful environment for all members of our community. We are thus highly disturbed by the vote taken on November 28, 2019, by the SSMU Legislative Council, in relation to some student leaders enrolling in Hillel Montreal’s Face to Face program to visit Israel and the Palestinian territories.

While diversity of opinion is fundamental and should be respected at all times, polarization that reaches a point where it fosters a culture of ostracization, or when our students do not feel respected on our campuses because of their identity, religious and political beliefs, will not be tolerated.

The decision made by the SSMU Legislative Council is contrary to the University’s values of inclusion, diversity and respect. Furthermore, it appears to diverge from SSMU’s own Constitution and it represents a very serious breach of trust. For that reason, we call upon the SSMU Board of Directors to seriously consider the concerns raised by students and take proper action.

The McGill administration will continue to monitor the situation as it unfolds, and take needed measures to ensure that our students feel safe and free of harassment, including holding SSMU accountable to the principles and values of its own Constitution.

I would like to take this opportunity to make it clear that there is absolutely no place for discriminatory behaviour, attitude or discourse that run contrary to our core values and principles. As Deputy Provost, Student Life and Learning, and with a strong mandate from the Principal, I will remain vigilant to ensure that all members of our community feel safe, welcomed and respected on our campuses.

Kudos to Provost Labeau! But the bigotry keeps on coming, for the Post also reports this tidbit:

Wright’s plight dovetails into an even more absurd controversy that erupted last month at the University of Toronto, where a student union refused to support a campaign by the school’s Hillel to make kosher food available on campus, since doing so would be “pro-Israel.”

The Graduate Student Union told a Jewish student representing Hillel in requesting support for its “Kosher Forward” campaign that supporting the kosher food campaign would go against the “will of the membership.”

After the media storm it caused, the student union apologized for “unintentionally caus(ing) harm toward the Jewish community,” but the university’s Hillel responded that “this apology does not address the antisemitic nature of their original response. This is the core issue that must be discussed.”

Now imagine that, say, Students for Justice in Palestine demanded that halal food be available at the University. Maybe that wouldn’t happen, but nobody would say that the refusal was based on the request being “pro-Palestine.” Had that happened, it would have been true bigotry against Muslims disguised as a political sentiment. But it wouldn’t have happened.

41 thoughts on “Anti-Semitism at McGill University: student asked to resign from student government after accepting an educational trip to Israel and Palestine”