I’ve posted two pieces (here and here) about the recent fracas involving the Crimson, the newspaper published by Harvard students—and probably the most famous college newspaper in the U.S.  As you may recall, on September 12 a campus group called Act on a Dream had a rally at Harard that, among other things, called for the abolition of United States Immigration and Customs Enforcement (ICE).

After the demonstration was over, the paper, in its coverage, called ICE to ask for a comment—a standard practice in journalism. (ICE had no response.) But that call to ICE enraged many students and alums: over a thousand of them signed a petition condemning the Crimson‘s coverage of the rally, particularly its asking ICE to comment.  That, said the critics, was the equivalent of tipping ICE off about undocumented Harvard students, and of endangering the “safety” of the student body. (“Safety” and “harm” have become the new buzzwords to use when somebody does something you don’t like.)

In response, the Crimson chief editor and its President wrote a joint and levelheaded editorial informing the students that nobody was endangered, and that journalists have good reason to ask those who are the subjects of criticisms or demonstrations for comment:

At stake here, we believe, is one of the core tenets that defines America’s free and independent press: the right — and prerogative — of reporters to contact any person or organization relevant to a story to seek that entity’s comment and view of what transpired. This ensures the article is as thorough, balanced, and unbiased toward any particular viewpoint as possible. A world where news outlets categorically refuse to contact certain kinds of sources — a world where news outlets let third-party groups dictate the terms of their coverage — is a less informed, less accurate, and ultimately less democratic world.

Students, especially the elite and privileged ones who attend Harvard, shouldn’t need to be told this stuff, but apparently they’re not acquainted with how journalism works. At any rate, the editorial wasn’t patronizing, but clarifying, and that should have been the end of it.

But of course this being college, it wasn’t. As I reported on November 11, Harvard’s College Council, the student governing body, then censured the Crimson for its asking ICE for a comment, and, as the Crimson reported then, “Members of several campus groups including Act on a Dream and the Harvard College Democrats have instructed their members not to speak to The Crimson unless it changes its policies.” The Harvard College Democrats!

In other words, these folks are asking the Crimson to modify its standards of journalism so that it changes its reporting policy depending on the ideology of the group reported on.

And even that isn’t the end of it. Now, in a piece published three days ago, the Crimson further reports that a group of 50 students, including some current and former editors of the newspaper, staged a rally in front of the Crimson’s building to continue the protest against the paper’s simple act of asking ICE for a comment. Click on the screenshot to read the piece: 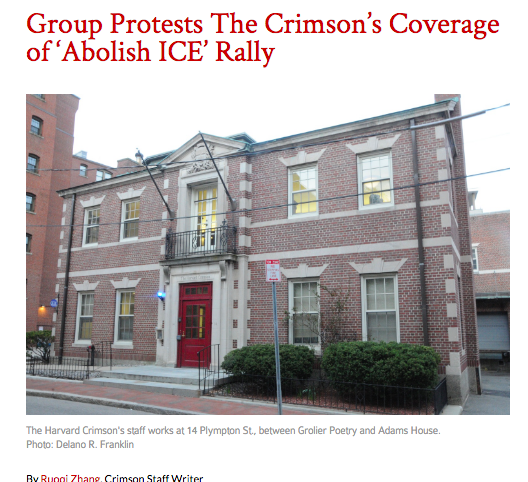 As the paper reports,

Current and former Crimson editors organized the protest to support a petition demanding that The Crimson apologize for its coverage, cease requesting comment from ICE, and commit to “protecting undocumented students,” according to a Medium post by co-organizer Danu A. K. Mudannayake ’20.

Mudannayake is a well known and vociferous activist at Harvard who played a role in helping get Law Professor Ronald Sullivan ousted as head of Winthrop House because he was on Harvey Weinstein’s defense team, despite Sullivan’s long history of also helping minority and oppressed people. If you look up “woke” in the dictionary, you’ll lilely find the definition illustrated with Mudannayake’s picture. But the article above continues:

Mudannayake, a Crimson design editor, declined to comment for this story. Act on a Dream Co-Directors and former Crimson editorial editors Emily A. Romero ’21 and Diego Navarrete ’21 — who were also present at the protest, along with other members of their organization — also declined to comment.

How current and former editors can demand that their own paper abjure responsible journalistic standards is beyond me. And the signatures on the anti-Crimson petition continue to grow:

Act on a Dream’s petition calling on The Crimson to apologize and change its policies has garnered more than 1,000 signatures as of Sunday night. Fifteen student organizations including the Phillips Brooks House Association, Harvard College Democrats, and Harvard Graduate Students Union–United Automobile Workers have also signed on.

Finally, in an earlier article about the petition, we see a divergence between the views of activists and the views of journalists on how a newspaper should behave. The divergence is, of course, predictable:

Marion Davis, director of communications for the Massachusetts Immigrant and Refugee Advocacy Coalition, said she understands the perspectives of both The Crimson and Act on a Dream.

“I know the Crimson acted on a desire for fairness, but I have learned [through] experience that getting both sides isn’t always what is fair, especially when one side has already made its views well known through the megaphones of government,” Davis wrote.

Note these words well: “Getting both sides isn’t always what is fair.” Seriously? The Crimson asked ICE to respond to the report of a campus demonstration, which it hadn’t done (and never did) using the “megaphones of government.” Davis is asking here for only one side’s views to be covered. This is an Orwellian assertion that “unfair is fair”.

Thank goodness the journalists weighed in:

At the same time, several journalism organizations said that The Crimson’s decision to request comment from ICE was consistent with widely accepted journalistic practices and did not put any protesters in danger.

Society of Professional Journalists President Patricia Gallagher Newberry said it is “wholly appropriate” that The Crimson contacted ICE to respond to criticisms of the agency.

“You’re not calling ICE to call out an individual person who might be in our country without the documentation required by ICE. You’re simply asking for it to respond in a holistic way to the Abolish ICE Movement,” Gallagher said.

What bothers me is how some apparently educated people can get so offended by the mere existence of ICE that they try to dismantle a bulwark of American democracy: a free press. It bothers me that giving both sides of a story is deemed “unfair” when one of the sides is the government and the other the Offended. And it bothers me that Harvard University, my Ph.D. alma mater, which is supposed to be America’s best school, has some students stuck so far down the rabbit hole that they protest the paper for which they work because that paper is trying to get both sides of a story.

23 thoughts on “Harvard students demonstrate at the Crimson’s building, continuing to protest the newspaper’s asking ICE for a comment”