A: What are you doing?
Hili: I’m guarding this rainbow ribbon to keep it from moving. 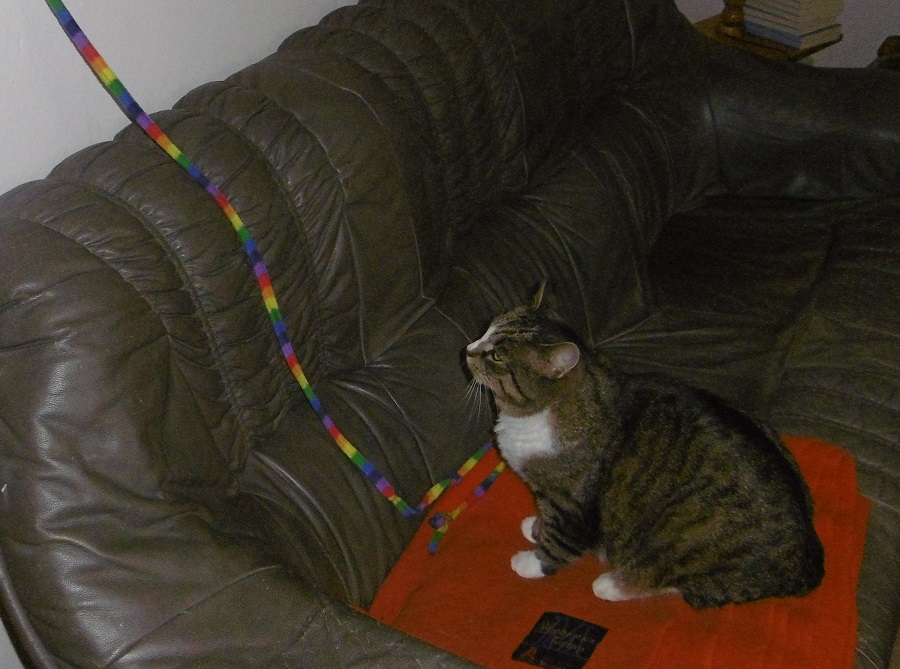 Ja: Co ty robisz?
Hili: Pilnuję, żeby ta tęczowa wstążka się nie ruszała.
.
If it’s Friday – or any other day – it must be rush hour down on the farm!

Watch this 19-year-old cat jump into his dad’s arms after being lost for 7 years 💞 pic.twitter.com/NncpaEuQ3c

This dog got so attached to one of his foster kittens — watch him reunite with her months later 😍 pic.twitter.com/qhV0PPFSTv

A mother cougar with two very playful not so small kittens pass by our trail camera. Along with @WildlifeLeague and @JohnEMarriott we set up a series of cameras to document interesting cougar behavior for our wild cat project. Watch for surprise ending! #cougar #trailcam pic.twitter.com/ssm0nUiuRs

The bats make these collective milling flights prior to departing for a night of foraging. Why? To test the wind? Stretch their wings? Decide where to feed? We don’t know, but maybe someday we will…#ZamBats pic.twitter.com/S75RzfRMH1

Some brief advice on what we can do as individuals to respond to the climate crisis, from my colleague Kevin Anderson:

Next year, it will all be about the Mars2020 mission. Space scientist Emily Lakdawalla got a sneak preview:

Spaceship!!! I visited Mars 2020 rover today at @NASAJPL. It’s nearly ready to be shipped to Florida for launch preparations.

Finally, when The Boss tires of life at University, he can always find another occupation (DO NOT FEED BREAD TO DUCKS):

Apparently there’s a ‘duck lady’ who goes around Vancouver with her duck handing out sandwiches to homeless people. As it’s winter now, her duck is wearing shoes.
It is not known if ALL of the sandwiches reach their intended recipients… pic.twitter.com/QHMKUWTLv7