Well, we’ve headed out of Punta Arenas, loaded with supplies, fuel, and new passengers, and are once again steaming toward the Beagle Channel. This will be my third and penultimate voyage through this corridor between the Atlantic and Pacific Oceans (the other two ways to get through are the Straits of Magellan to the north, and the Drake Passage, the open-ocean path around Cape Horn, to the south).  Here are two photos I took of the Channel the day before yesterday. It was sunny then, but today it’s drizzly and gloomy. 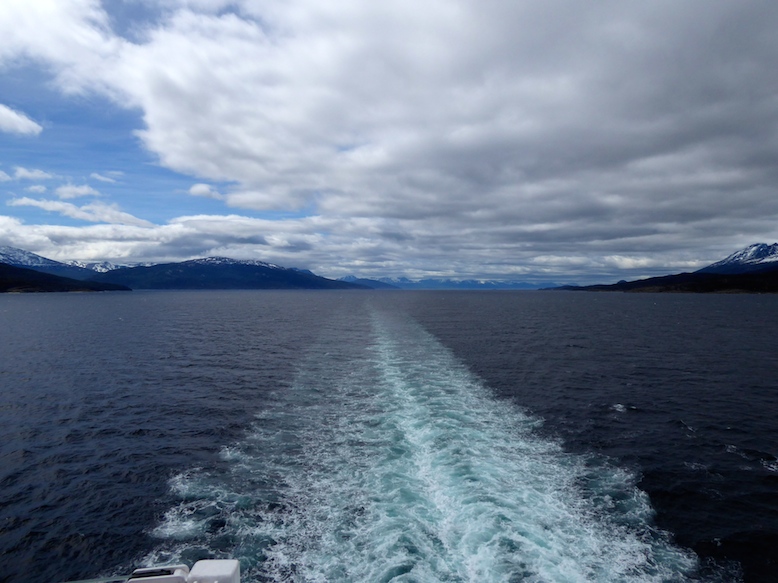 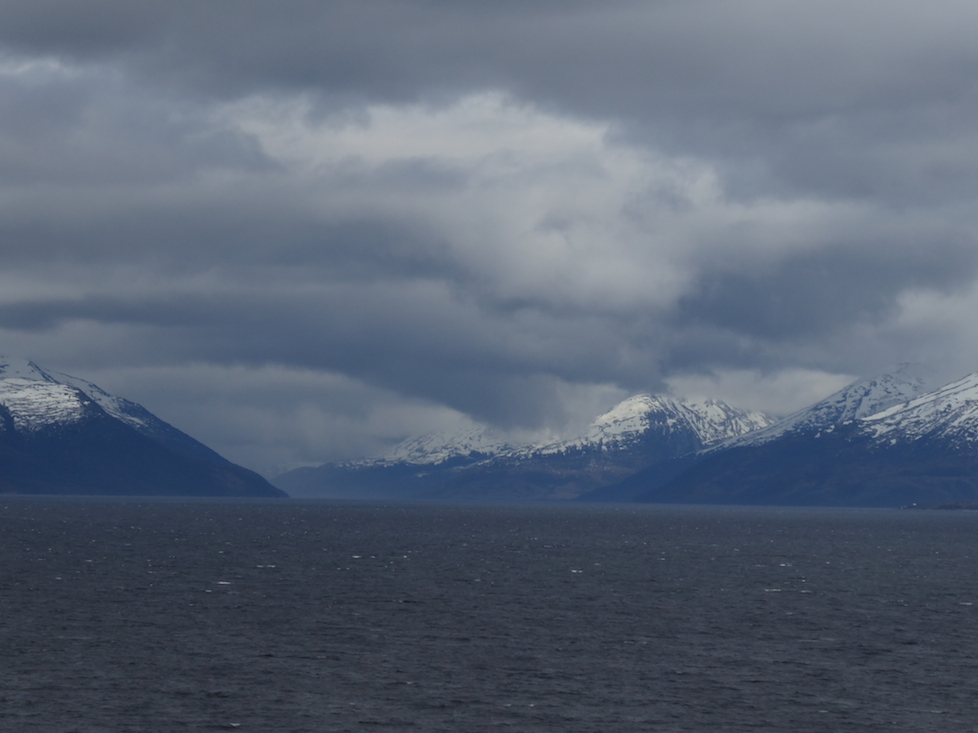 Here’s where we are now according to the ship’s map, heading through the fjords toward the Channel:

And, from the ship’s live antennacam, the grey fjords of Patagonia, a contributor to Pringle Stokes’s suicide (see below):

Here’s a map of the Beagle Channel. You can see we’re heading southeast to enter from the west. The channel is about 240 km (150 miles) long, so it’ll take us about ten hours to get through.

The Channel’s connection with Darwin and the Beagle, taken from Wikipedia:

The channel was named after the ship HMS Beagle during its first hydrographic survey of the coasts of the southern part of South America which lasted from 1826 to 1830. During that expedition, under the overall command of Commander Phillip Parker King, Beagle’s captain Pringle Stokes committed suicide and was replaced by captain Robert FitzRoy. The ship continued the survey in the second voyage of Beagle under the command of captain FitzRoy, who took Charles Darwin along as a self-funding supernumerary, giving him opportunities as an amateur naturalist. Darwin had his first sight of glaciers when they reached the channel on 29 January 1833, and wrote in his field notebook “It is scarcely possible to imagine anything more beautiful than the beryl-like blue of these glaciers, and especially as contrasted with the dead white of the upper expanse of snow.”

Here’s one of the “Five Nations” glaciers (named after different countries) that I photographed on my first trip through. I like to think that this is one of those “beryl-like blue” glaciers seen by Darwin: 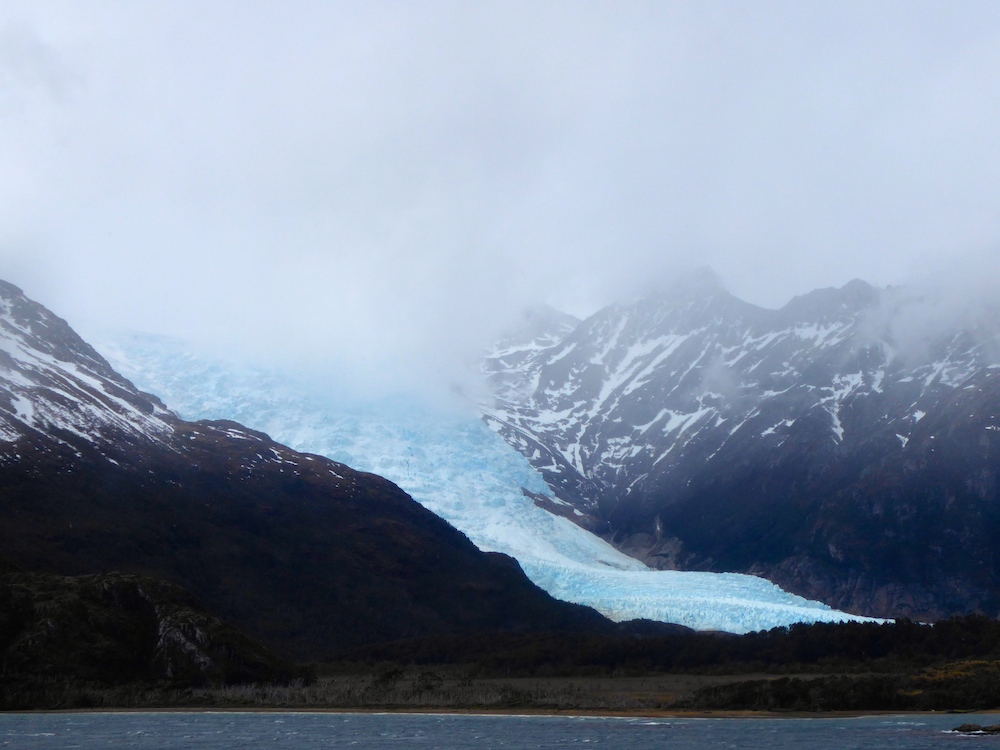 Note that both captains of the Beagle, Stokes and FitzRoy, committed suicide. Both were depressives whose suicides were exacerbated by circumstances: in Stokes’s case the terrible weather and waves, in FitzRoy’s his financial troubles. Stokes shot himself in the head, but botched the job and took 12 days to die of infection, remaining conscious to the last. FitzRoy (who rejected Darwin’s published theory of evolution) cut his throat with a razor on the way to breakfast in 1865.

I talk about these incidents in the first part of one of my shipboard talks, whose title is shown below. I’m lecturing wearing the Official Expedition Team shirt for the ship, and am proud to be a member. This was a hard lecture to write, as I had to weave together the stories of the Beagle and its two captains; the Fuegian people whom FitzRoy (and later other Brits) tried to turn into Christians, only to result in the death of the entire tribe from genocide and disease; and how the Beagle voyage, particularly Darwin’s encounters with the Fuegians, influenced his view of human evolution.

I think the lecture went well, though I spoke too fast for the translator (the lectures are translated into German in real time by our able translator Sebastian, and fed to German passengers in the audience through headphones). The photo below was taken by the ship’s photographer (she also photographed me in an Amundsen-replica parks) and streamed to our cabin t.v.s as part of a retrospective of our trip. I took a photo of the television screen. 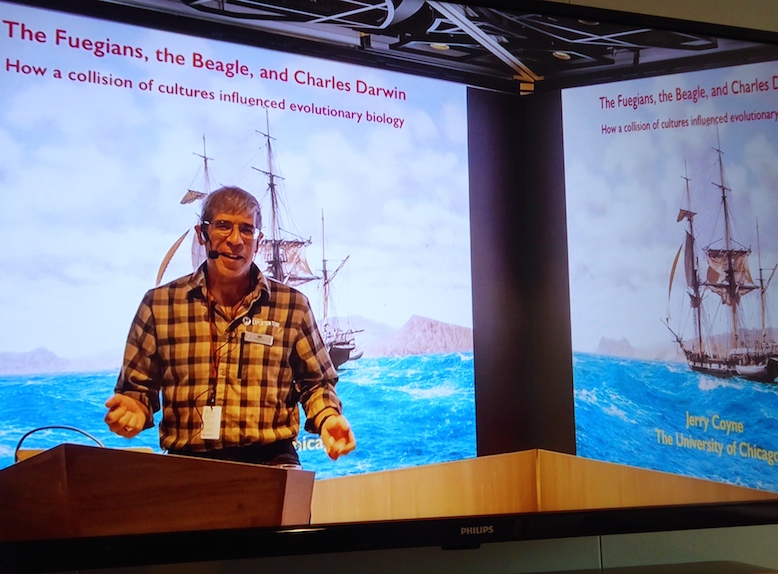 I’m sure some of you have wondered what life is like aboard the luxury vessel. Well, the food, for one thing, is excellent, and there are three big meals per day. As I never eat breakfast at home, and only a light lunch, this is overkill, but how can I resist things like snow crab and suckling pig? There are buffets for breakfast and lunch with everything you can imagine, and then a sit-down dinner served in three or four courses. I’ll have some weight to lose when I return to Chicago!

Here’s the head chef, who’s a funny guy, proffering me a slice of roast chicken. He and the staff have a particularly deft hand with roast meats: 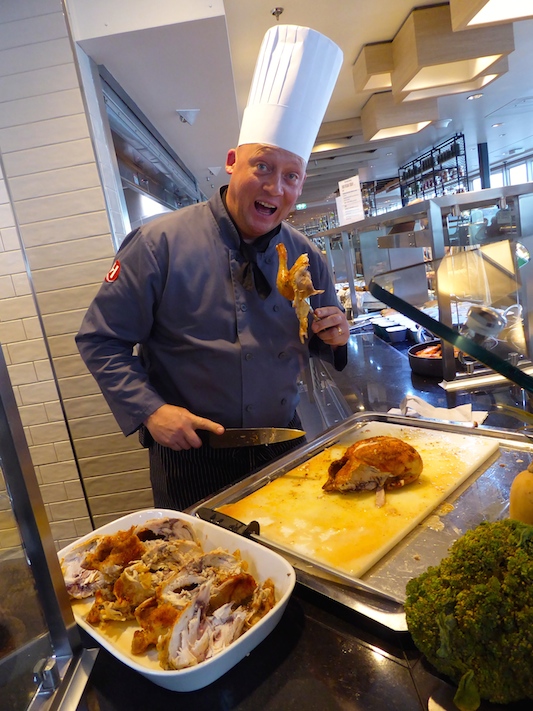 Swordfish for lunch, or at least that’s how it was labeled. Note the carved fruit and vegetables, which are a speciality of the staff: 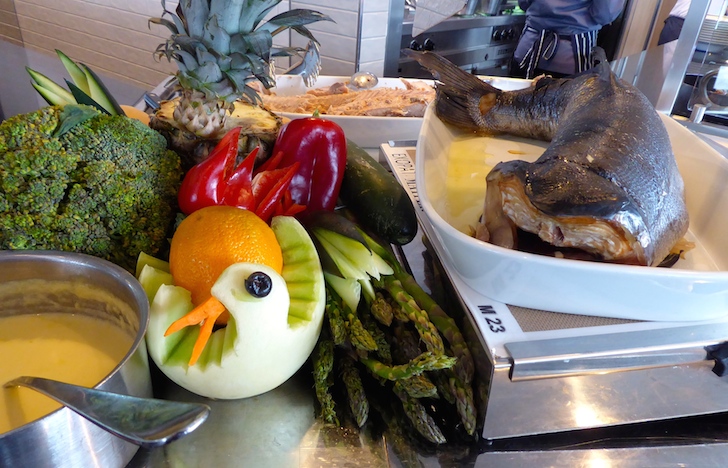 Below: a carved melon and penguins. I believe this form of fruit carving is East Asian, and the waitstaff and kitchen staff are largely Filipino. Everyone is very pleasant aboard, including the hardworking servers, and it’s a delight to interact with them.

The service staff is aboard for eight straight months, working, I think, seven days a week, and then they go home for four months. Compared to the Philippines, the wages here are good, so they’re willing to leave home for much of the year to earn money to send to their families. (Room and board for the staff is likely free.) 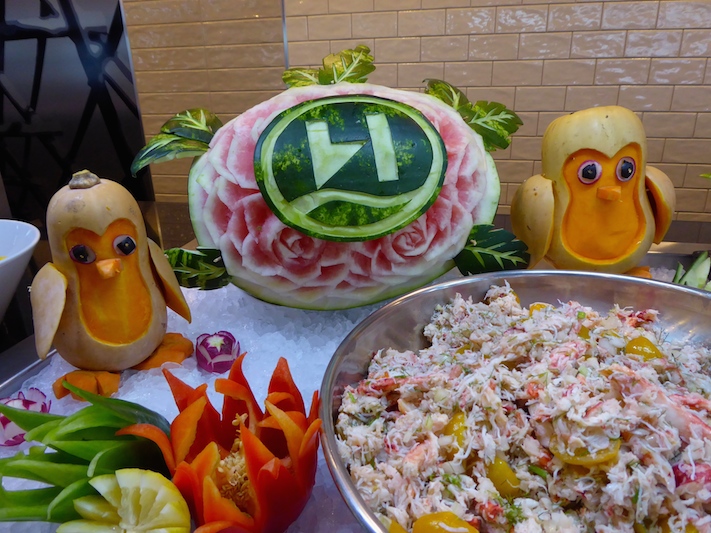 Another penguin carved out of squash, standing between a dish of crab claws and shellfish (these are only two of the many treats available at lunch, though of course the rotation changes daily): 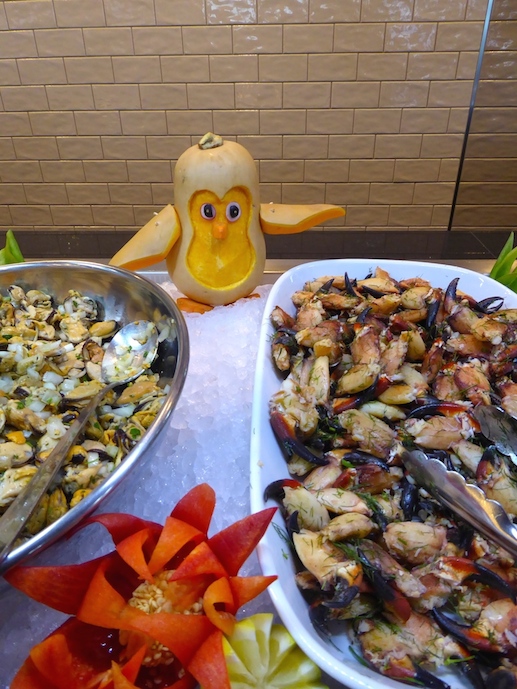 The main dining room is the Aune, where we eat three meals a day, though there’s a fancier restaurant on the ninth deck for passengers who have suites (you can eat there for €25 with a reservation, but so far I’ve abstained). There’s also an informal restaurant where you can get stuff like burgers, milkshakes, steamed buns, and empanadas. Here’s the Aune’s dinner menu from the penultimate night we were aboard: 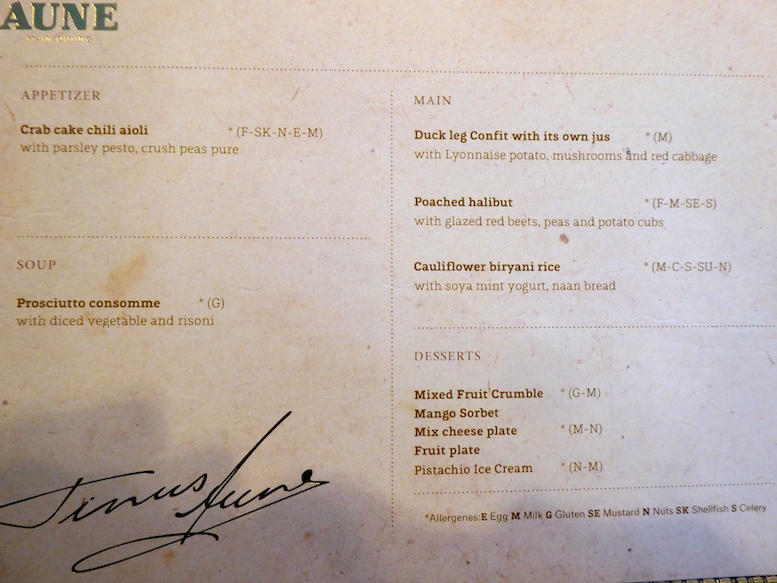 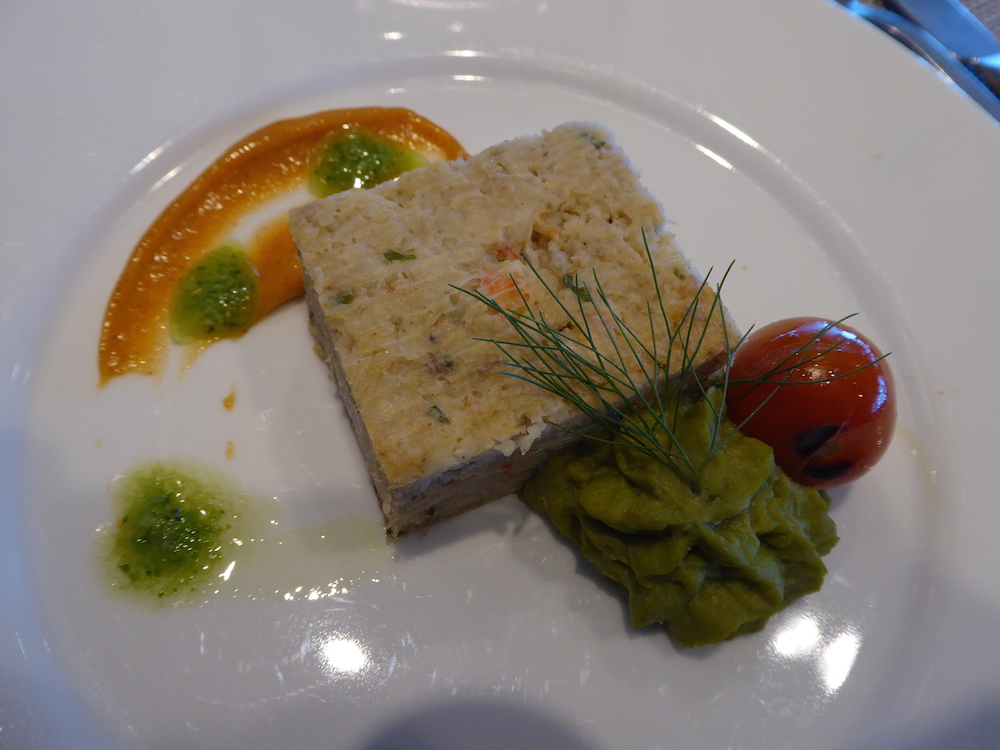 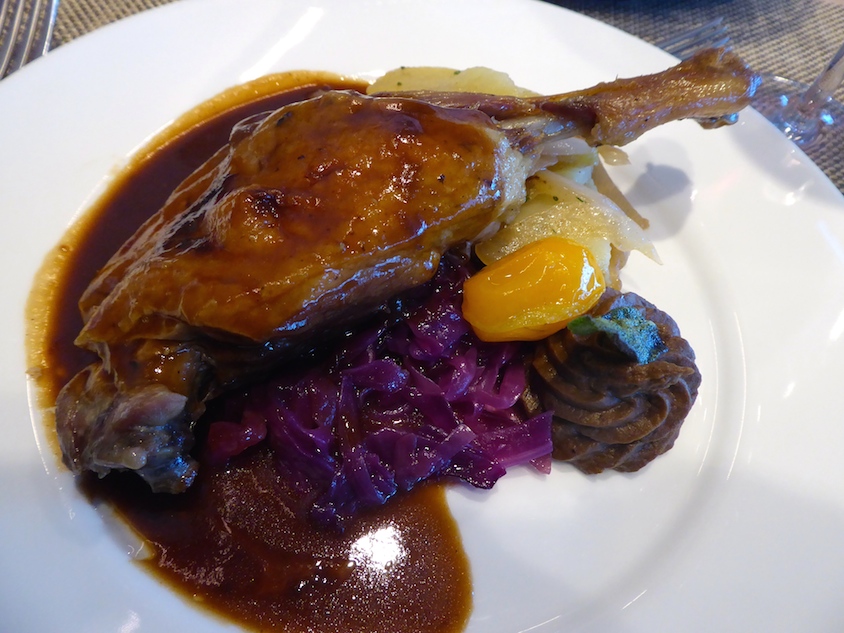 Halibut with beets, peas, and what the menu calls “potato cubs”, which appears to be a misspelling of potato cubes: 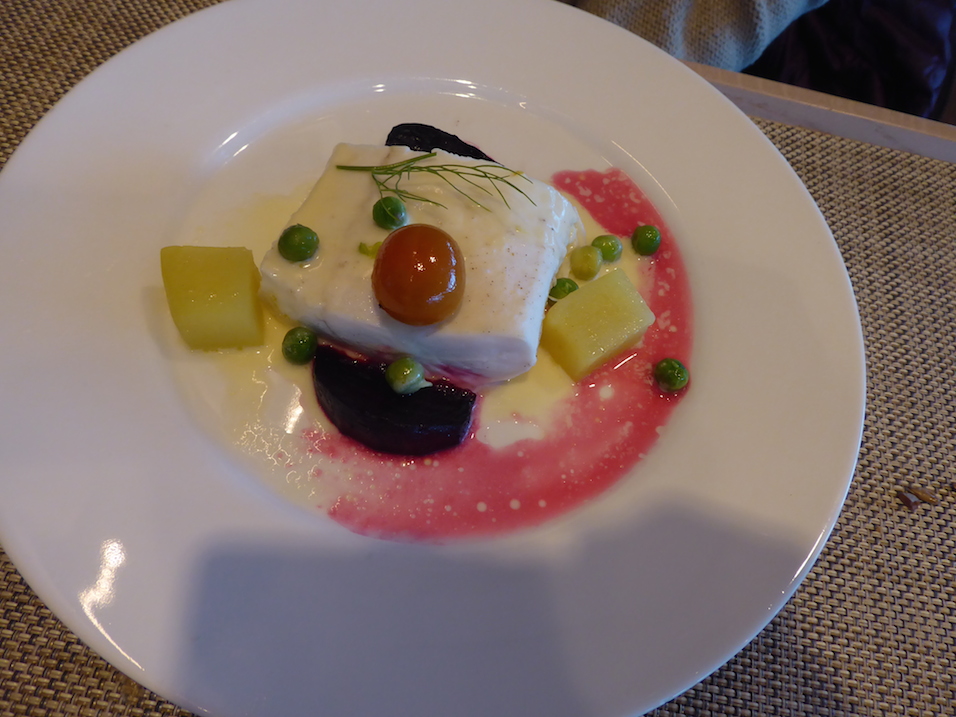 And dessert: fruit crumble. Alcohol, of course, costs extra, but I’m not much inclined to drink on these voyages, especially given the price of booze. But I have had a glass of wine or four. 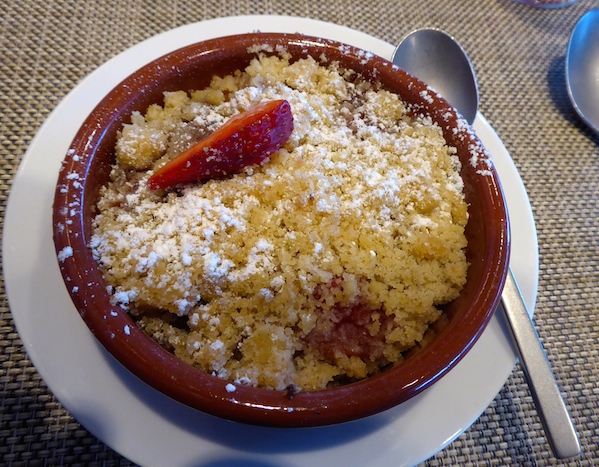 On the last day of the trip they held a “penguin workship” where passengers were given clay and acrylic paints, and invited to mold a penguin. I stopped by afterwards to see the display, but the makers had removed all but one of their creations. This is clearly a chinstrap penguin, and isn’t bad for a first try. 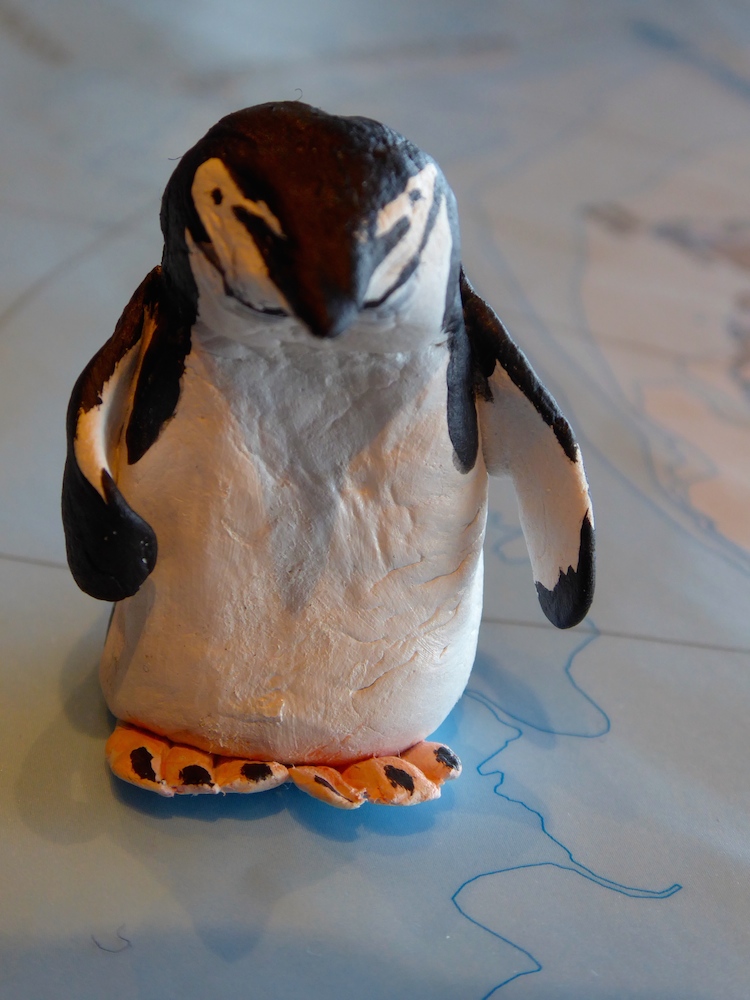 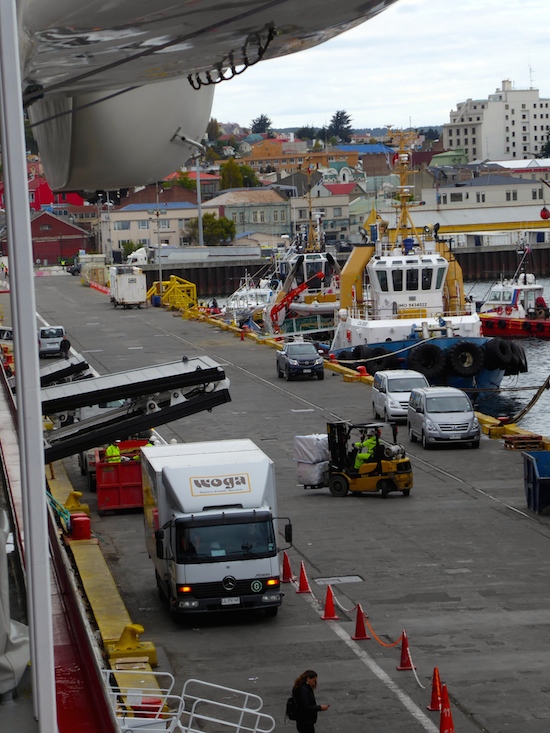 I’ve switched cabins and now have a smaller one, but it’s still very nice. All cabins have a sea view, a comfy bed with warm down comforters, a television (it gets CNN and other stations), a desk, a nice bathroom with very hot water, and a rubber-floored closet to dry your boots (and washing). Here are two views of my new cabin: the entry and the room itself: 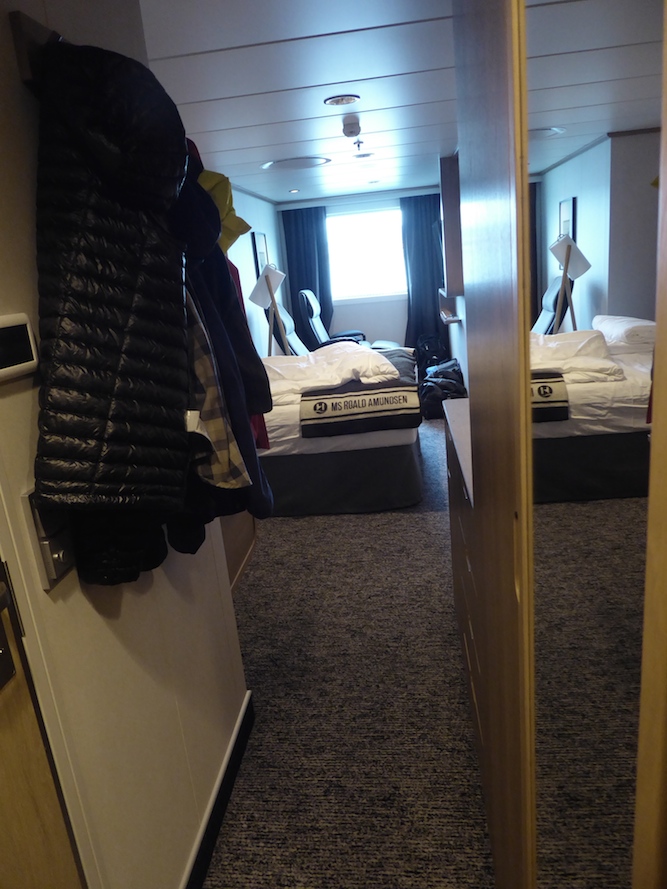 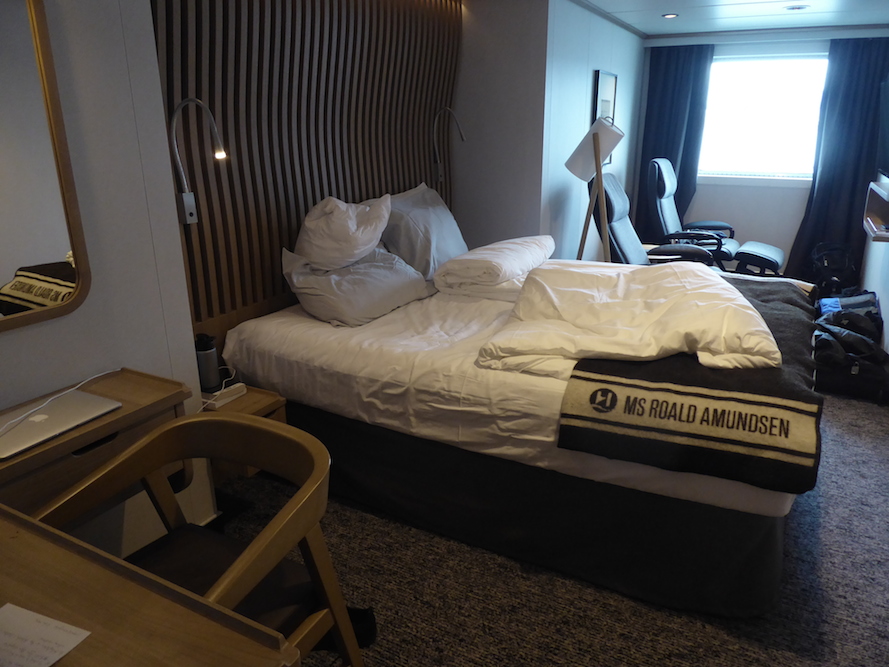 Onward and upward as we head toward Antarctica for a longer visit and then to the Falklands. More pictures to come!

30 thoughts on “Travels: Back to Antarctica”