If I tell you that the following article is from HuffPost (yes, I’m cooling my heels on a docked ship), could you tell me whether the answer is “yes” or “no”?

The answer, of course, is “yes”, as you probably guessed. As cultural icons are “canceled” one by one, Smokey (remember: it’s Smokey Bear, not Smokey The Bear) was doomed. Why? According to HuffPost, the subheading gives the reasons: “his advice is outdated, incomplete, and ignores climate change.”

But if you grew up with the 75-year old ursine icon, and often saw signs like the one below, you’ll be puzzled. For Smokey’s job was to keep humans from being careless about fire in the wilderness, that, is, he was created to prevent anthropogenic fires, not fires by lightning or other natural causes. After all, you can’t prevent a fire caused by lightning. But being sure that you’re careful with campfires and matches is not outdated advice, nor does it ignore climate change! 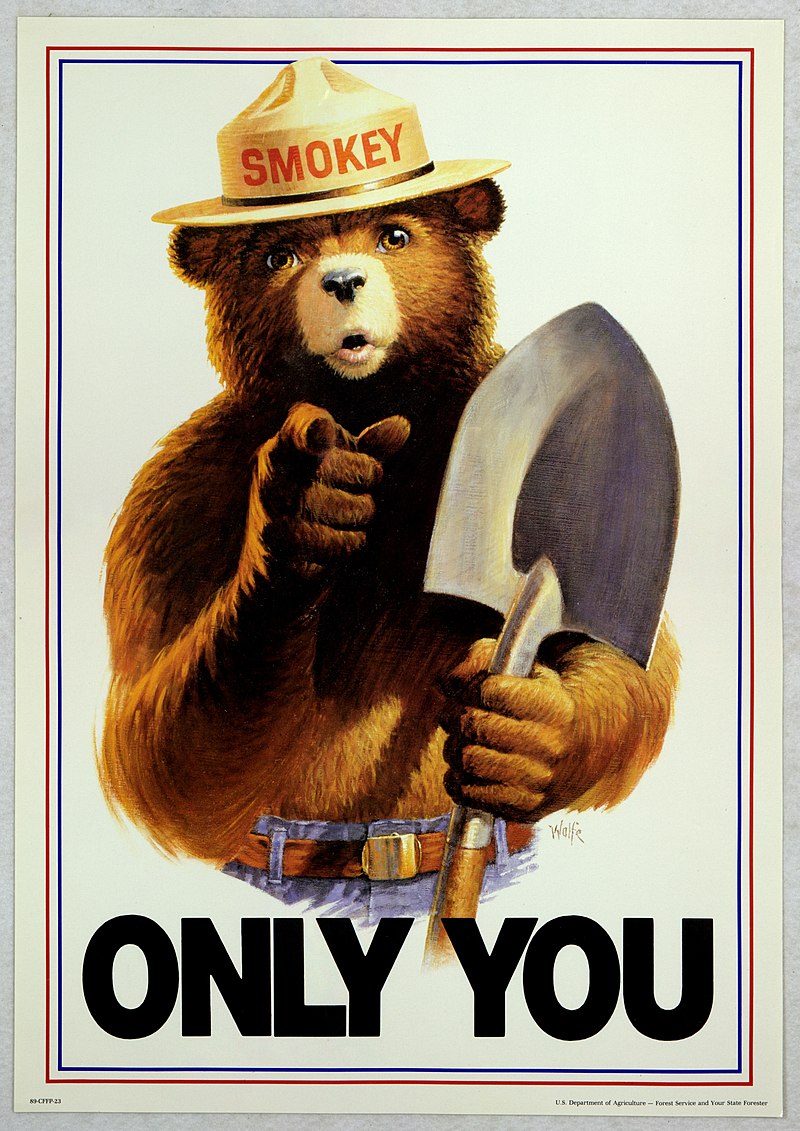 But is Smokey’s advice incomplete? Apparently so, for it lacks nuance (always run when you see that word!).  Why? Because, as scientists have known for a long time, some ecosystems depend on regular natural fires for their maintenance, and when those are prevented, the ecosystem changes.

Many conifer forests, for example, depend on fairly regular natural fires to prevent overgrowth (see more in this article), to retain some fire-dependent species (i.e., red pine) from being displaced by deciduous trees, and to create a mixture of live and dead trees essential for some wildlife. The red-cockaded woodpecker and black-backed woodpeckers are fire-dependent bird species. Nowadays controlled fires are often set to keep ecosystems as natural as possible.

And so HuffPost calls out Smokey for his ignorance:

The aggressive fire exclusion Smokey championed proved detrimental to long-term ecosystem health, leaving forests choked with a dangerous amount of vegetation that can fuel catastrophic fires ― a phenomenon that scientists have dubbed “the Smokey Bear effect.” Climate change is only making these infernos worse, with year after year of bigger, more erratic and highly destructive wildfires.

In other words, Smokey ― the most important figure in fire prevention and the longest-running public service advertising campaign in U.S. history ― may be a net negative for the environment.

. . .Smokey’s enduring legacy is, well, complicated. In a 2013 paper titled “Be careful what you wish for,” two Forest Service researchers wrote that Smokey’s success in preventing fire “has come at considerable cost,” including a “decline in forest health, an increase in fuel loads in some forests, and wildfires that are more difficult and expensive to control.”

And yet aggressive fire suppression remained “the order of the day.”

Two responses. First, the suppression of natural forest fires in habitats where they are needed to maintain ecosystem health is not Smokey’s fault! This came from a general scientific ignorance about fire-dependent habitats. I seriously doubt that firefighters put out such fires because of Smokey. Further, even natural fires were, and are, still being extinguished when they endanger human habitation. That’s what happens when humans infringe on natural habitat. Further some natural fires occur in habitats that don’t depend on regular burning for their maintenance. Those, too, should be controlled.

Further, Smokey’s dictum has always been directed toward campers and hikers, not at firefighters. To several generations of Americans, it was “be very careful with matches and campfires in the wilderness.” That was good advice, and remains so.

Now comes the bit that makes me laugh. It’s not just individuals who cause fires by ignoring Smokey’s message. It’s those blasted corporations! Where is Bernie when we need him? So the word “you” in Smokey’s message “Only you can prevent wildfires” is misguided. “You” can be Pacific Gas and Electric, and so Smokey lacks nuance!

Yet Smokey Bear’s message has remained largely the same. The only change to his signature catchphrase came in 2001, when it was updated from “Only YOU can prevent forest fires” to “Only YOU can prevent wildfires,” to account for the fact that fire is not limited to forests. But while about 85 percent of wildland fires in the United States are human-caused, some of the worst fires in recent years, including last year’s Camp Fire, the deadliest and most destructive blaze in California’s history, were started not by careless individuals but by California’s investor-owned utility.

Perhaps his name should be changed to Bernie Bear! (The “Burn” homonym would be a nice touch.) 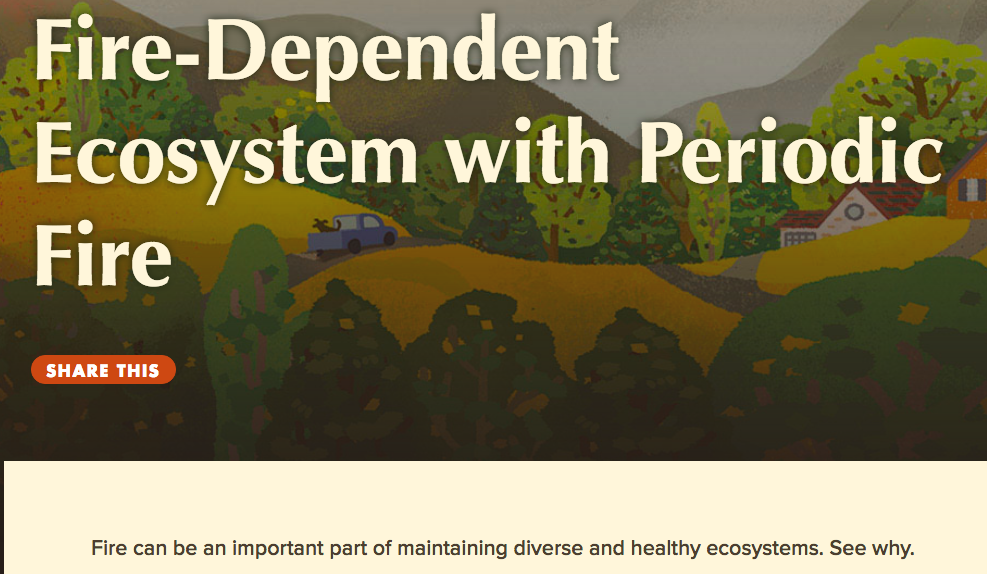 Global warming will worsen the probability of wildfires, both natural and anthropogenic, but Smokey’s message to humans remains relevant regardless of climate change. Yes, Smokey’s message can be updated, but how often does anybody really see a Smokey Bear ad these days? Here are some suggestions about how to update him:

Sarah Berns of Winthrop, Washington, has worked on both sides of wildland firefighting, first as a Forest Service smokejumper and later in fire prevention. In August she published a piece in Outside magazine arguing that Smokey “desperately needs a makeover.”

. . . Berns says Smokey’s transformation should be drastic. In her Outside piece, she calls for swapping Smokey’s “dad jeans for green firefighting pants and a yellow shirt,” giving him a new voice that appeals to a younger, more diverse audience, and putting him to work on prescribed burns. “Smokey, pick up a drip torch and lead by example,” she wrote.

Yep, Smokey is bad because he’s a Boomer Bear! Dump those dad genes! I’m not sure what voice would appeal to a “younger more diverse audience” since Smokey’s already a bear of color, but I’ll leave that to the ad people.

It’s certainly important to educate the public about the positive role of wildfires, but more important to educate the firefighters and naturalists, who, of course, are already learning. Smokey’s influence has waned, and I haven’t heard of him in years. But his message—to be careful about fires in the wilderness—has stayed with me since I was a kid. This whole article could have been written without the extensive attacks on a lovely and useful symbol, but that’s now how the kids roll.