One thing I haven’t done on this trip is to look at HuffPost. But, like a dog returning to its vomit, I couldn’t resist a peek this afternoon, as there’s not much doing on the ship.

The site is still pretty much the predictable farrago of Regressive Leftism, but also flaunts an announcement that the site is changing the way it covers the news (click on screenshots to go to stories). Check out the story below that argues that because the world changes, the site must change the way it covers—indeed, “redefines”—the news. (What kind of logic is that?) 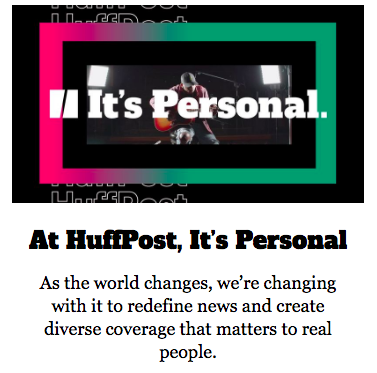 As always, you’ll find the latest news: what’s happening at the White House and beyond, as well as the big stories that shape our lives. That includes the quiet housing crisis and the struggle for voting rights, and battles over health care, inequality and gender discrimination. And of course, the history-making presidential race.

But you’ll also find a lot more stories about what’s happening at your house: raising good kids, finding a therapist you can afford, managing your student debt. We know the day-to-day challenges of life are serious news too, and we are here to help.

Above all, you’ll find stories about people. Manar Hussein, a Muslim woman who stood up to those who tried to intimidate her for wearing a modest bathing suit, and Jo Etta M. Harris, a Black woman who had the police called on her while nursing her child in her car. Or David Ledbetter, the teenager who had the bright idea to register people to vote while they waited in line for a coveted Popeye’s chicken sandwich. People who, like you, want to make their lives and the world better.

Less real news, more stuff about your own life and about people, especially those from oppressed groups. In other words, HuffPost is tired of doing journalism and is becoming Woke People magazine.

Some pressing stories. First, the euphemism of the month:

Enough of that; we’ll leave Ms. Watson to her self-partnering in the hopes that she and herself don’t become consciously uncoupled.

Then the obligatory holiday joy-killing. First they disposed of Halloween (see below) and then they came for Thanksgiving: 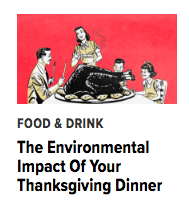 The main tip is to ditch the turkey!

And don’t substitute other meats, either, because they’re worse.

As for Halloween candy, fugeddaboutit: it’s often wrapped in plastic, which is hard to recycle. The implicit answer to the question below is “You betcha!” 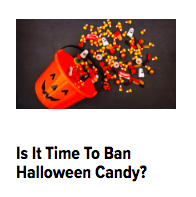 We need to talk about Halloween candy.

Public awareness of our plastic pollution crisis is at a high, plastic straws and bags are getting banned in cities and states across the country, and yet there has been almost no discussion about the massive environmental problem that Halloween candy creates.

When I read that first sentence, my automatic response was, “No we don’t!”

In his superb collection A Mencken Chrestomathy, H. L. Mencken famously defined “Puritanism” as “the haunting fear that someone, somewhere, may be happy.” That’s what we’re seeing here. Of course I’m worried about the environment, and I recycle scrupulously, but enough is enough. I’d tell HuffPost to get the hell off my lawn, but at the moment all I have is a patch of deck.