We docked at Puerto Natales about noon yesterday, and then went out on a 9.5-hour tour (by bus with other passengers) to Torres del Paine National Park, a fantastic experience.

First, our position (the ship’s antenna webcam is still broken). We’re parked at the town of Puerto Natales and will be departing at 5 pm. In the meantime, we’re heading ashore for a walk around the town and a visit to a highly reputed local brewery. 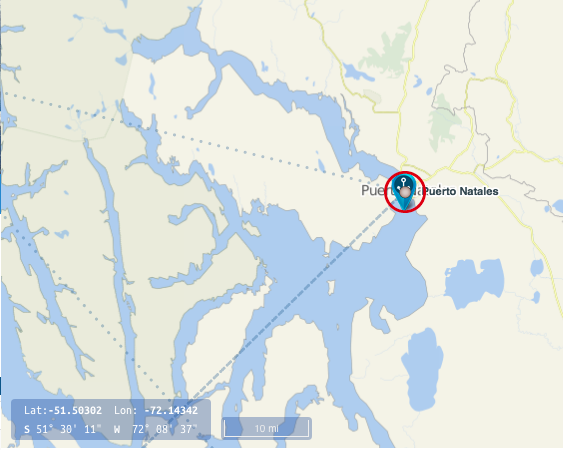 We’re heading south toward Antarctica, and may stop at the tip of Cape Horn, going ashore at the southernmost point of South America. That will depend on the weather and seas, which are often dire in that part of the world. 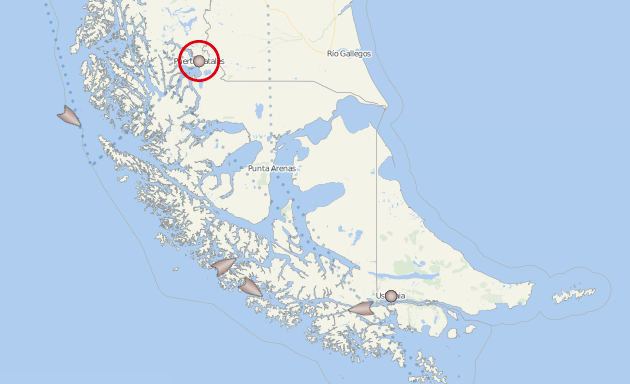 Yesterday, as I said, was a long visit to Torres del Paine National Park, one of the world’s great parks and a site especially famous for its beautiful mountains. My whole life I’ve longed to see them, especially the Pinnacles, which look like this (none of the pictures in this post were taken by me): 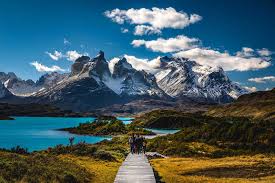 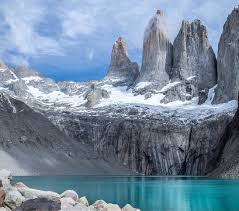 The weather was with us, only slightly cloudy, and I have a gazillion pictures of these mesmerizing mountain. Climbing them has long been a goal of mountaineers.

Animals spotted including our “target animal,” the Andean condor (Vultur gryphus), which, according to Wikipedia, has one of the world’s biggest wingspans:

[The condor] has a maximum wingspan of 3.3 m (10 ft 10 in) exceeded only by the wingspans of four seabirds and water birds—the roughly 3.5 m (11 ft 6 in) maximum of the wandering albatross, southern royal albatross, great white pelican and Dalmatian pelican. 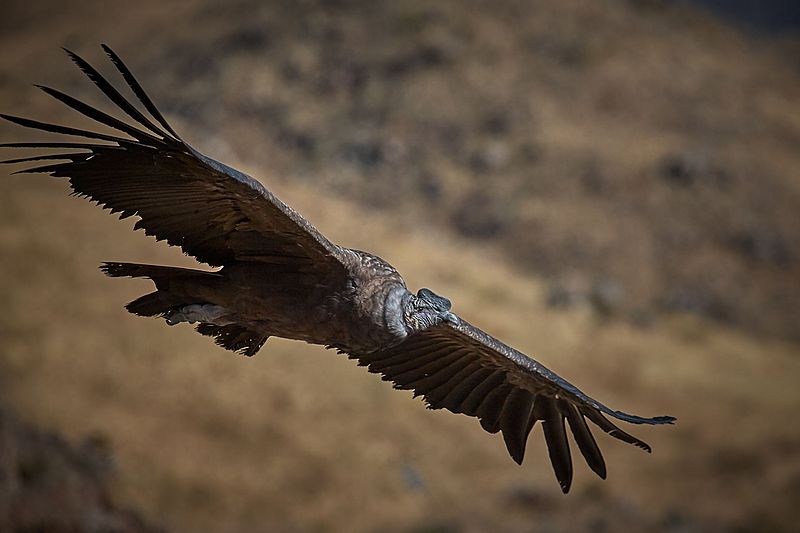 Upland geese, also known as Magellan geese (Chloephaga picta). This is a rare sexually dimorphic goose, whose dimorphism is mentioned in the Wikipedia article but not explained (they are described as monogamous). Perhaps an ornithologically-inclined reader can weigh in here. The geese we spotted were always in dark/white pairs—ebony and ivory, living in perfect harmony:

Males have a white head and breast, whereas the females are brown with black-striped wings and yellow feet, and could be mistaken for ruddy-headed geese. A greenish-bronze speculum is located on the inner secondary flight feathers of the adult male.

In Chapter VI of On the Origin of Species, author Charles Darwin noted that the upland goose has webbing between its toes that appeared to be “rudimentary in function, though not in structure”, and concluded that this was a vestigial anatomical feature in this bird. 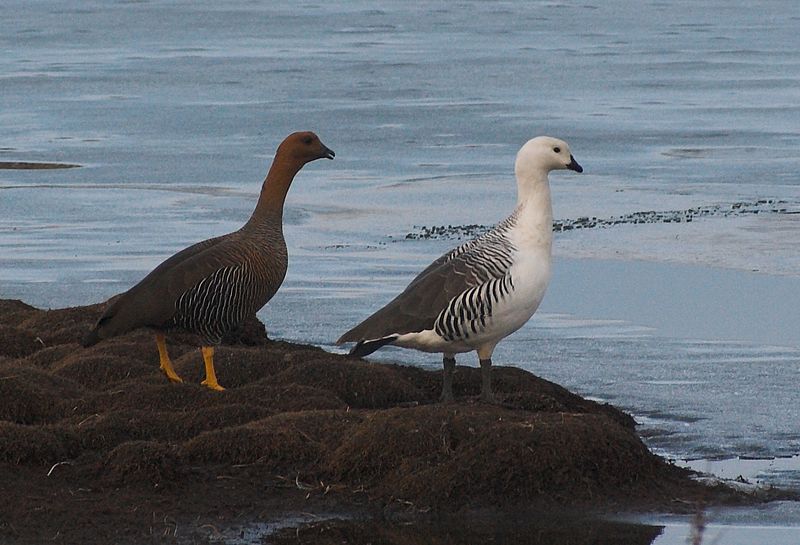 Black-necked swan (Cygnus, melanocoryphus, the largest waterfowl native to South America). It is, however, small for a swan. As Wikipedia notes:

The smallest member in its genus, it is found in freshwater marshes, lagoon and lake shores in southern South America. The black-necked swan breeds in Chilean Southern Zone, Patagonia, Tierra del Fuego and on the Falkland Islands. In the austral winter, this species migrates northwards to Paraguay and southern Brazil. The wetlands created by the Great Chilean earthquake like Carlos Anwandter Nature Sanctuary in Cruces River have become important population centers for the black-necked swan. 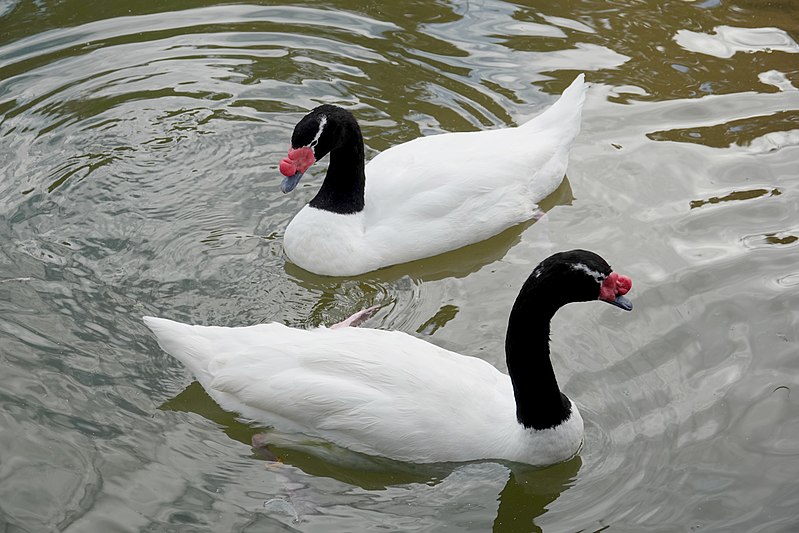 We saw lots of wild guanacos (Lama guanacoe), in the family Camelidae. They stood or ran alongside the road, loping with great grace. I’m told they can leap cattle and sheep fences with ease. They appear to be highly adaptable animals, according to Wikipedia:

Guanacos live in herds composed of females, their young, and a dominant male. Bachelor males form separate herds. While reproductive groups tend to remain small, often containing no more than 10 adults, bachelor herds may contain as many as 50 males. When they feel threatened, guanacos alert the herd to flee with a high-pitched, bleating call. The male usually runs behind the herd to defend them. They can run at 56 km (35 mi) per hour, often over steep and rocky terrain. They are also excellent swimmers. A guanaco’s typical lifespan is 20 to 25 years.

Some guanacos live in the Atacama Desert, where in some areas it has not rained for over 50 years. A mountainous coastline running parallel to the desert enables them to survive in what are called “fog oases” or lomas. Where the cool water touches the hotter land, the air above the desert is cooled, creating a fog and thus, water vapor. Winds carry the fog across the desert, where cacti catch the water droplets and lichens that cling to the cacti soak it in like a sponge. Guanacos then eat the cacti flowers and the lichens. 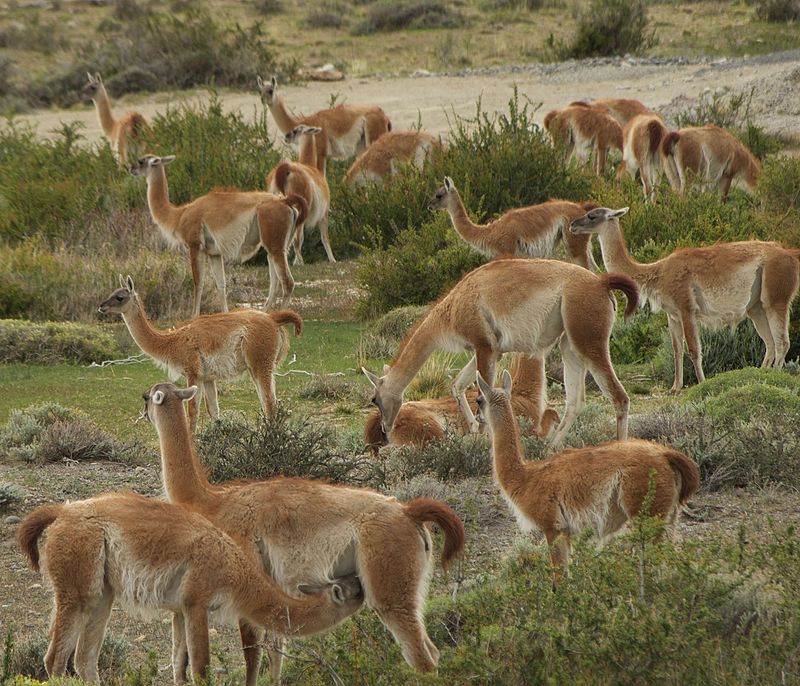 And one person, who happens to be a reader of this site named Paul (he and his wife Corinne are on this ship), actually spotted a mother puma (cougar) with two kittens, who, he reported, were frisking about mom. That was a rare sight and I’m sorry we didn’t see it. (Pumas are the main predators of guanacos.)

The South American cougar is a subspecies (Felis concolor concolor) of the same puma) that inhabits North America. It ranges widely through jungle to pampas. Here’s one (and congrats to reader Paul for the spot): 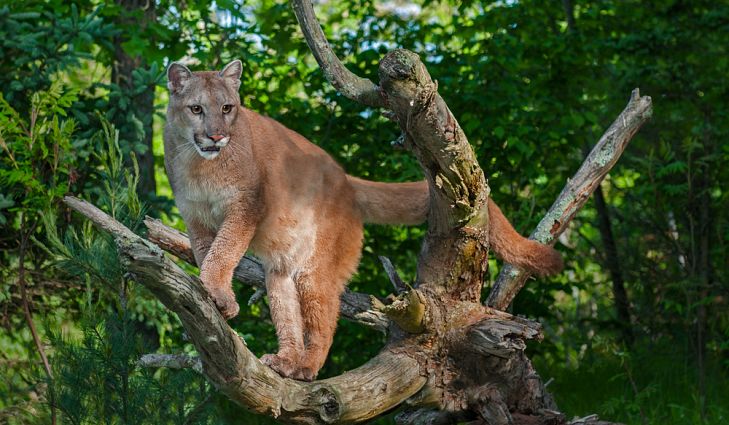 43 thoughts on “Where we are now and what we did”