Tomorrow is Halloween, and what better way to celebrate than by scaring you about how it’s celebrated at some American colleges? The institution at hand happens to be the venerable University of Texas at Austin, a public university and one of America’s better state schools.

For Halloween, however, the Dean of Students Office chose to treat the students like young children by issuing a four-page pamphlet (pdf here, or click on screenshot below) telling students which costumes are offensive and which are recommended—and why. Objecting to this kind of paternal behavior is what got Nicholas and Erika Christakis harassed and demonized at Yale and, ultimately, led to their resignations as residential house heads.

Before they start in on the chiding and patronizing lectures, the administrators added a First-Amendment disclaimer, which only makes what follows more ludicrous. 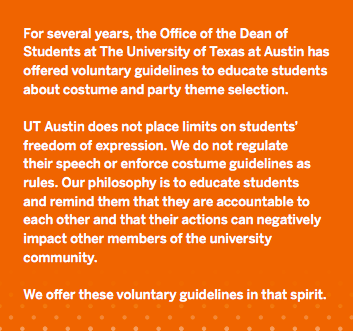 No, they don’t “regulate speech or enforce costume guidelines,” but they sure as hell tell you which costumes will offend other people, and they helpfully provide a list of bland and inoffensive costumes that will offend nobody.

Now of course there are costumes that will be considered generally offensive, like blackface or attire that blatantly mocks some groups. I wouldn’t wear such costumes, but neither would I tell others not to wear them—unless they ask my advice. One of the things students should learn—on their own—is that their actions may have consequences.

But the list of party themes and costumes proscribed by the Dean’s Office includes Hawaiians, gypsies (Roma), anybody in the Southern New World (offenseive to Latinxs), hobos, anything Asian, and “around-the-world” costumes, whatever those are. These are deemed “harmful” by the Dean of Students’ Office.

The pamphlet also gives six questions to consider when planning a Halloween party or considering a costume to wear. Implicit in these questions is that you must always consider the educational mission of your party or costume, assuming it has even the merest potential to offend. These two questions, for example, offend me: 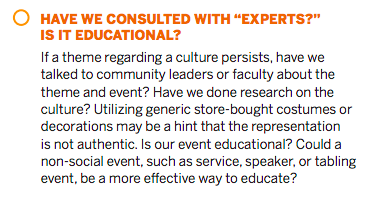 Sorry, but since when are Halloween costumes supposed to educate people? The “educational” question seems in fact to be a last resort for those miscreants who persist in their decision that a costume or party will have a theme about “a culture”. In that case, you must ensure that the costume or event somehow tells people about its authenticity and, presumably, about why other costumes harm groups that have been oppressed. But how the deuce can you be “educational” with a costume?

And here’s the bit where if you think that anyone might be offended by a costume, don’t do it! (The “we” here is the organization or individual considering a costume or party.) Note the dark words about “the consequences”. 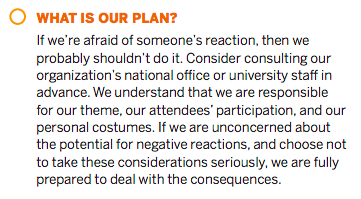 Since all costumes about cutlures or history are apparently verboten, the University recommends a list of appropriate and inoffensive costumes. Cast your eyes on this anodyne list: 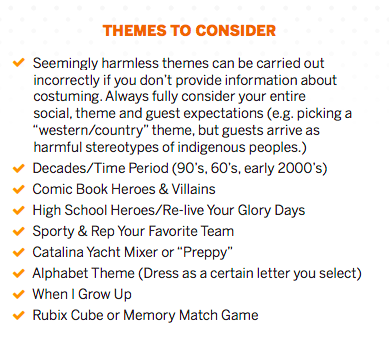 “Letters of the alphabet”? “When I grow up”? “Rubix Cube” costumes? (It’s spelled “Rubik’s Cube”, by the way.) You as a “high school hero”? This is guaranteed to take the fun out of Halloween by scaring you into not being at all edgy. The last thing I’d want to be on Halloween is a Rubik’s cube. And if I dressed as a nerd—my “glory days” in high school—would that not be offensive to nerds?

As I said, some costumes are in terrible taste and will tick off other people. But we should also remember that some people are constantly scrutinizing others for the least sign of ideological impurity, and some of those people seemingly want to be offended, for it gives them not only victim credit but also the right to chew out other people. The idea of being charitable and not automatically assuming the worst is, as they say, “erased.”

My own recommendation is to use your own judgment. But that, of course, was what Erika Christakis said in her email to Yale students that caused such a fracas. You simply can no longer tell students to use their own judgement as adults. For—at least at Yale and The University of Texas—the students are seen not as adults, but as children roughly eight years old.

And this will only get worse. In a decade or so, you’ll be allowed to dress only as yourself.

90 thoughts on “The Annual College Halloween Follies: The University of Texas”