Ganesha, the elephant-headed Hindu god of luck and the offspring of Shiva and Parvati, is my favorite deity. Pot-bellied and full of fun, he’s also the god of wisdom and patron of arts and sciences. But I’ve never seen the numinous pachyderm in Jesus and Mo before. In today’s Jesus and Mo strip, called “nose”, Ganesha (also called Ganapati) appears for what may be the first time. The strip came with a note:

A silly one today. Ganesh seems to bring out the inner child in the prophets. The story is about Cher riding a mechanical elephant on stage, and the furore it caused:

https://www.thetimes.co.uk/article/tusk-tusk-cher-73-rides-mechanical-elephant-into-row-with-hindus-05c9lws73
(sorry, this subscription-only source was all I could find)

Well, I could read this much of the Times article, which came with a photograph:

Cher is wowing audiences with her age-defying looks on her tour, but she has been accused of being outdated in her attitude towards ancient religions and culture.

During a segment in the show, Cher, 73, comes on stage singing the Gayatri mantra, a revered Sanskrit text, while riding a mechanical elephant and wearing a sari. She then transitions into her 1990s dance classic All or Nothing.

Following her London show at the O2 arena on Monday, she was accused of cultural appropriation. Rina Arya, a professor at Huddersfield University, said she understood why the act had “riled South Asian communities”. Cher had taken sacred Hindu symbols and “emptied them of significance”. The elephant represents the Lord Ganesh.

“Cher’s display is unequivocally insensitive because of its… [paywall begins].

Clearly, people are outraged at the “cultural appropriation” here. These seems to be a lot of that species of outrage going around. . . .

First a photo of Cher’s misstep: 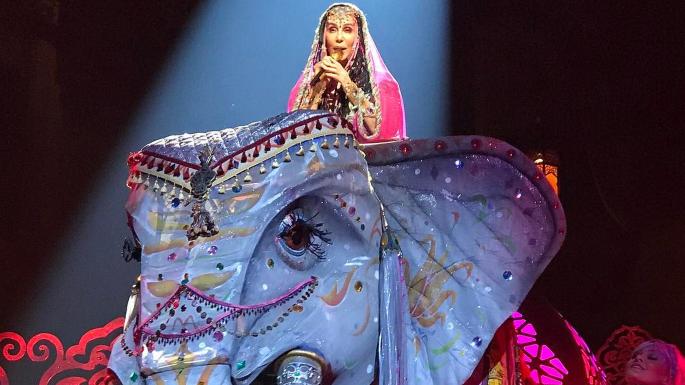 Then, Jesus and Mo and Ganesh, who’s going to leave a large deposit with the Abrahamic twins: 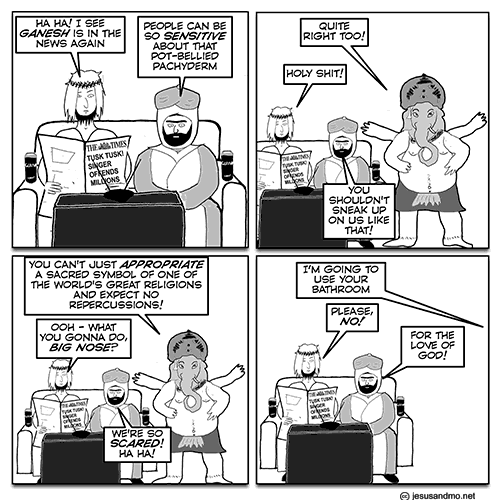