This article is not a joke: it was published in the journal The Contemporary Pacific (a University of Hawaii journal) and was written by Holly Barker, a lecturer in the Department of Anthropology at the University of Washington. By now the article, which is all over the media, will surely drive Dr. Barker into hiding, and she deserves all the opprobrium she gets for making the beloved SpongeBob SquarePants into a figure of horrible malfeasance. You will see what happens when careerist academics, brought up in the humanities (Barker is a sociocultural anthropologist, not a scientist), decide that yet another bit of popular culture should be put into the Sausage Grinder of Wokeness.

Click on the screenshot to see (or download) a pdf of the article. (I’m betting it won’t be up long, but I have a copy.) 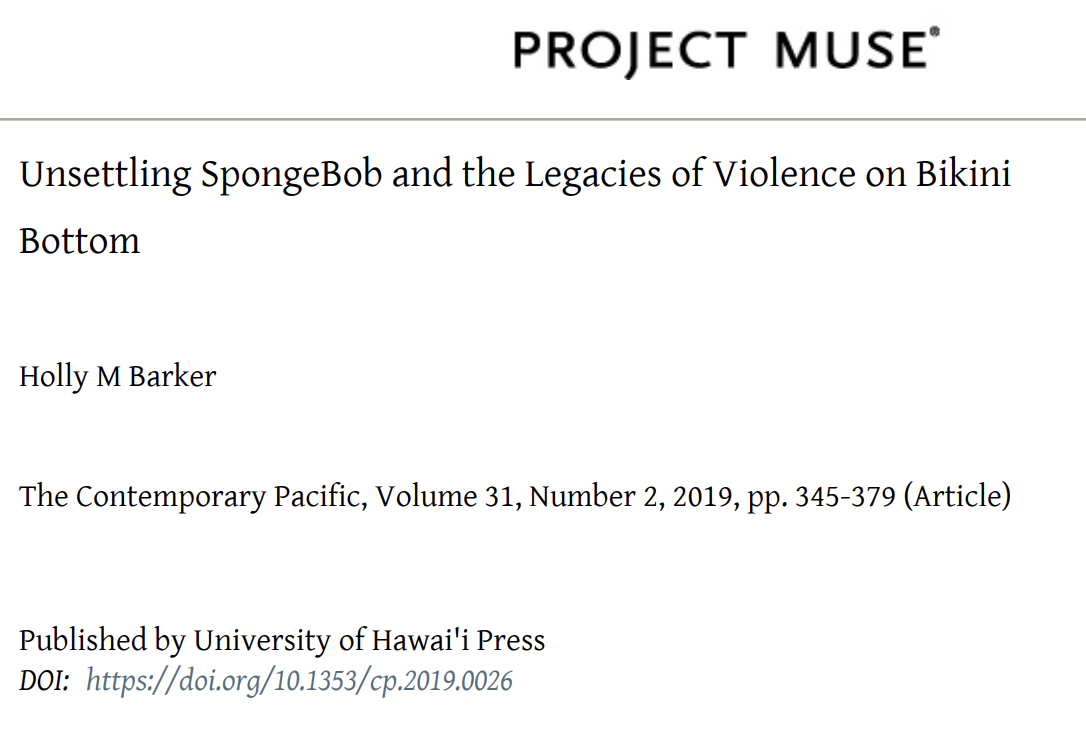 I cannot emphasize how bad this article is, and if you don’t believe me, read it, or at least skim it. All the tropes of Woke postmodernism march in line, like military horses, through the pages. Here, for example, is the paper’s abstract:

Billions of people around the globe are well-acquainted with SpongeBob Squarepants and the antics of the title character and his friends on Bikini Bottom. By the same token, there is an absence of public discourse about the whitewashing of violent American military activities through SpongeBob’s occupation and reclaiming of the bottom of Bikini Atoll’s lagoon. SpongeBob Squarepants and his friends play a role in normalizing the settler colonial takings of Indigenous lands while erasing the ancestral Bikinian people from their nonfictional homeland. This article exposes the complicity of popular culture in maintaining American military hegemonies in Oceania while amplifying the enduring indigeneity (Kauanui  2016) of the Marshallese people, who maintain deeply spiritual and historical connections to land—even land they cannot occupy due to residual radiation contamination from US nuclear weapons testing—through a range of cultural practices, including language, song, and weaving. This article also considers the gendered violence of nuclear colonialism and the resilience of Marshallese women.

This is all because SpongeBob, by living on Bikini Bottom, maintains a “singularly submerged viewpoint that disconnects the lagoon bottom from holistic Marshallese constructions of place, which, rather than seeing the air, land, and sea as separate domains, as represented in the cartoon, maintain the interconnetivity between these realms.”

Oy, SpongeBob: how could you do that?

Yes, you can argue about the colonialism and nuclear testing by the West on the Pacific Islands, but you don’t need SpongeBob to do that. Nevertheless, Barker buys into the theory that “the characters in the show are malformed and bizarre because they are mutants exposed to radiation from the atomic detonations at Bikini.” This, of course is a “fan theory”, which Barker considers “not farfetched.” But more important is that SpongeBob and his pals have become “squatters” at Bikini, making its story comical and erasing the reality of what happened to the island (and I’m not denying it’s bad).

Bollocks. Read the whole article and tell me if you think the SpongeBob cartoon is doing any real harm to anyone. Nope, all it’s doing is advancing Barker’s career, which, judging by the media reaction, isn’t all that efficacious. She even admits that the show didn’t intend to be so racist and colonialist, but that this is its outcome:

It is implausible that Hillenburg and Nickelodeon, the cartoon’s network, envisioned an act of US colonialism as they developed the show, but it is disturbing that it did not occur to them that Bikini Bottom and Bikini Atoll were not theirs for the taking. Since millions of viewers worldwide hear about Bikini Bottom through SpongeBob without being offered a deeper understanding about Bikini Atoll or its people, it is essential to consider how the show shapes viewers’ worldviews, ideologies, and understandings.

What we have here, then, is “cultural appropriation” of an island by a cartoon. Read it and weep. But you’ll also thrill, for example, to the section in which Barker, focusing her laserlike analysis on other aspects of American cartoon culture, asks and answers the question, “What do Smokey Bear and SpongeBob SquarePants have in common”? (p. 363). If you’re really up on woke culture, you’ll be able to guess. (Think indigenous cultures.)

Yes, I’ve read the paper, and it made me ill. Not only is it completely stupid, an exaggerated but real example of the degeneration of the humanities since their infection with Wokeness, but somebody got paid to do the work that led to this. And somebody thought it was worth publishing. Is it any wonder that the humanities, infested with stuff like this, is losing enrollment in colleges? (Of course, not all humanities scholars turn out such worthless drivel.)

But it will also make you laugh—especially if you can envision it as a hoax. And it could be, though I doubt it, since Barker is a genuine anthropology professor. The problem with humanities “scholarship” like this is that it’s indistinguishable from satire, and when that happens you can kiss these areas goodbye.

105 thoughts on “The Woke get hold of SpongeBob with predictable results: he’s deemed racist, colonialist, pro-nukes, an eraser of women, and a normalizer of colonial and military violence”