There are three kinds of vestiges that constitute evidence for evolution, or rather its sub-claim that modern species share common ancestors. I discuss all three in Why Evolution is True:

1.) Vestigial traits that persist in modern species but either have no adaptive function in a species or a function different from the one served in that species’ ancestors. The vestigial ear muscles of humans are one, the flippers of penguins (functional, but not for flying in the air) is another, and the coccyx in humans (sometimes with attached “tail muscles” that can’t move it) is a third.

2.) Vestigial genes that are functional in our relatives (and presumably in our ancestors) that have been inactivated in some modern species. There is no explanation for these “dead genes” save that they were useful in ancestors but aren’t useful any longer. Examples are “dead” genes that code for egg yolk proteins in humans (but don’t produce them); a dead gene for vitamin C synthesis in humans (we don’t make the vitamin because that gene is inactivated, but rather get it from our diet; and the many dead “olfactory receptor” genes in cetaceans (whales, dolphins, etc.)—genes that were active in their terrestrial ancestors but became inactivated because “smelling” underwater uses different genes and traits.

3.) Features in development that are transitory, and whose appearance makes sense only under the supposition that those features were present in common ancestors and persist in some descendants but not others. The lanugo (a transitory coat of hair in human embryos) is one.

Today’s paper, which just appeared in the journal Development, shows several other “transitory” evolution-attesting features. Diogo et al. show that human embryos develop muscles that disappear as development proceeds, but those muscles don’t disappear in some of our relatives, including closely related ones like other primates as well as distant relatives like reptiles.

Moreover, these muscles, which disappear in most human embryos, sometimes don’t disappear, persisting in adults as rare and nonfunctional variants. Or they appear in malformed individuals, with both phenomena often seen in “vestigial traits”. For example, some people are born without wisdom teeth, considered a vestigial holdover from our ancestors; and the functionality of human vestigial ear muscles that move the ears in our relatives, like cats and dogs, is variable: some people like me are able to move those muscles and wiggle their ears, while others can’t. 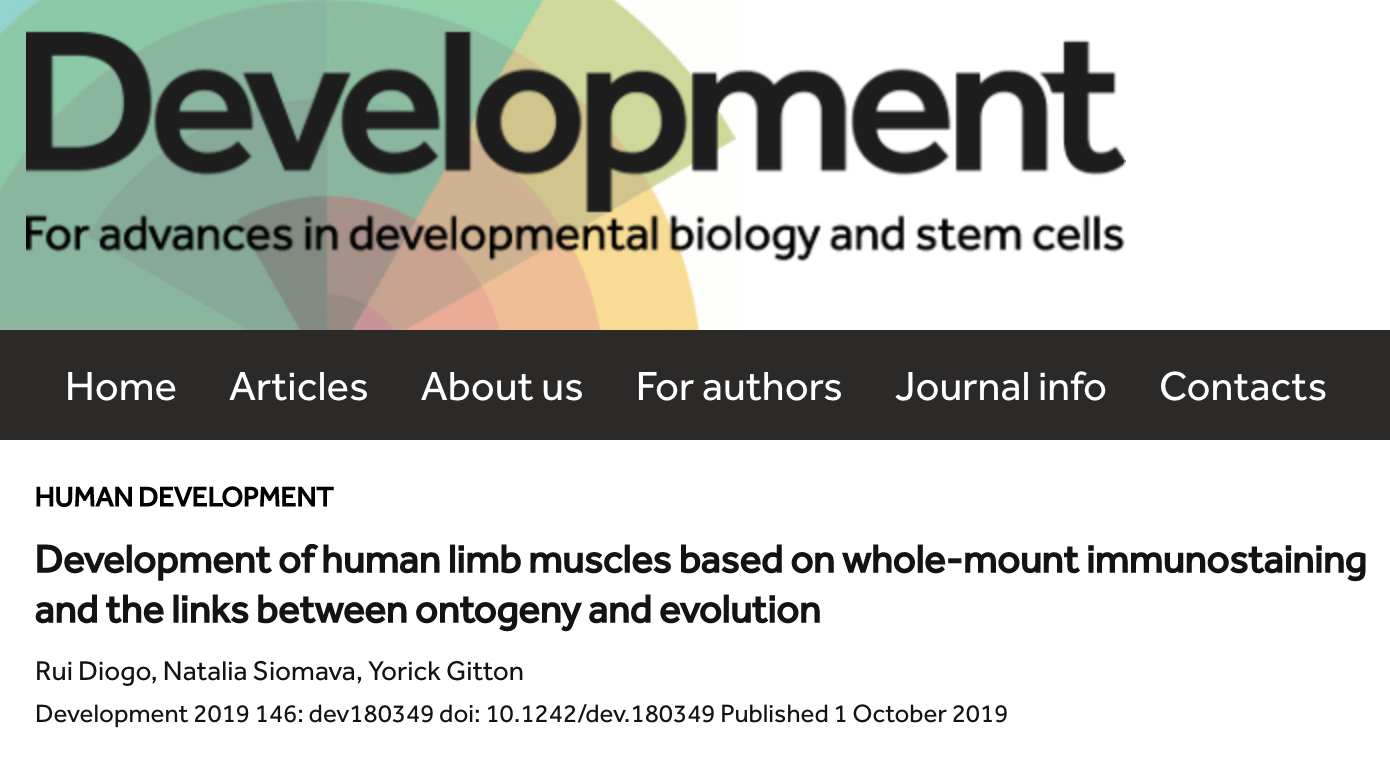 The authors visualized the muscles in the embryonic arm and leg by doing immunostaining—using antibodies that would affix to proteins in the muscles and also carried ancillary molecules that would make those muscles more easily visualized under the microscope in a three-dimensional way. The authors used 70 antibodies, but the main ones bound to muscle-specific proteins like myosin and myogenin.

They stained the mounted limb sections of 13 embryos (presumably from abortions) ranging from nine to thirteen weeks after gestation (quantified as “gestational weeks”, or GWs), and with the standard measurement “crown-rump length” (CR) ranging from 2.5 cm to 8.0 cm (about 1 to 3 inches). These were thus very small embryos, but the sophistication of the technique, and the efficacy of the stain, combined with our knowledge of embryonic development and tetrapod muscle anatomy, enabled the authors to produce pictures like these: the muscles in the hands of a 10 and 11-GW fetus: 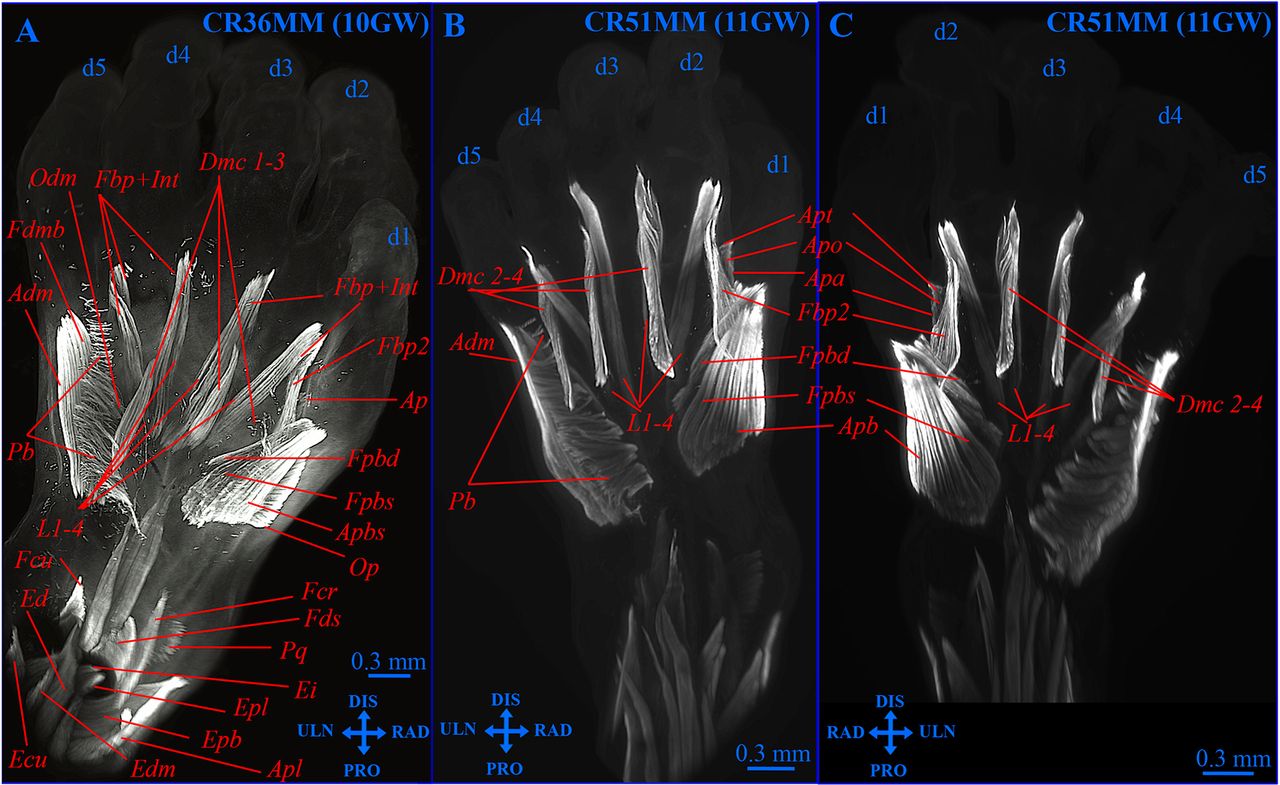 What they found is that human embryos show a number of muscles present in the adults of some other tetrapods (including our closest relatives, the chimps), but that disappear during human development, with a few of these “atavistic muscles” fusing with other muscles in human fetuses although remaining distinct in our tetrapod relatives.

Here’s how the authors describe the main results, listing some of the atavistic muscles in the embryos (I’ve put them in bold):

As summarized in Tables 2-5 and also noted above, various atavistic muscles that were present in the normal phenotype of our ancestors are present as the normal phenotype during early human ontogenetic stages and then disappear or become reduced and completely fused with other muscles, thus not being present/distinguishable in human adults. These include the upper limb muscles epitrochleoanconeus (Fig. 3), dorsoepitrochlearis, contrahentes 3-5 (Fig. 4) and dorsometacarpales 1-4 (Figs 3-5), and the lower limb muscles contrahentes 3-5, dorsometatarsales 1-4 (Fig. 6) and opponens digiti minimi (Fig. 6). These muscles are present in some other tetrapods, as shown in Tables 6 and 7, which summarize the comparisons with other limbed vertebrates. Of all these muscles, only the dorsometacarpales often remain in adults, fused with other muscles: all the others are normally completely absent in human adults. Fascinatingly, all these atavistic muscles are found both as rare variations of the normal adult population and as anomalies in individuals with congenital malformations such as those associated with trisomies 13, 18 and 21, reinforcing the idea that such variations and anomalies can be related to delayed or arrested development.

Here are two of the fetal atavistic muscles. First, the dorsometacarpales in the hand, which are present in modern adult amphibians and reptiles but absent in adult mammals. The transitory presence of these muscles in human embryos is an evolutionary remnant of the time we diverged from our common ancestor with the reptiles: about 300 million years ago. Clearly, the genetic information for making this muscle is still in the human genome, but since the muscle is not needed in adult humans (when it appears, as I note below, it seems to have no function), its development was suppressed:

Here’s a cool one, the jawbreaking “epitrochleoanconeus” muscle, which is present in chimpanzees but not in adult humans. It appears transitorily in our fetuses. Here’s a 2.5 cm (9 GW) embryo’s hand and forearm; the muscle is labeled “epi” in the diagram and I’ve circled it: 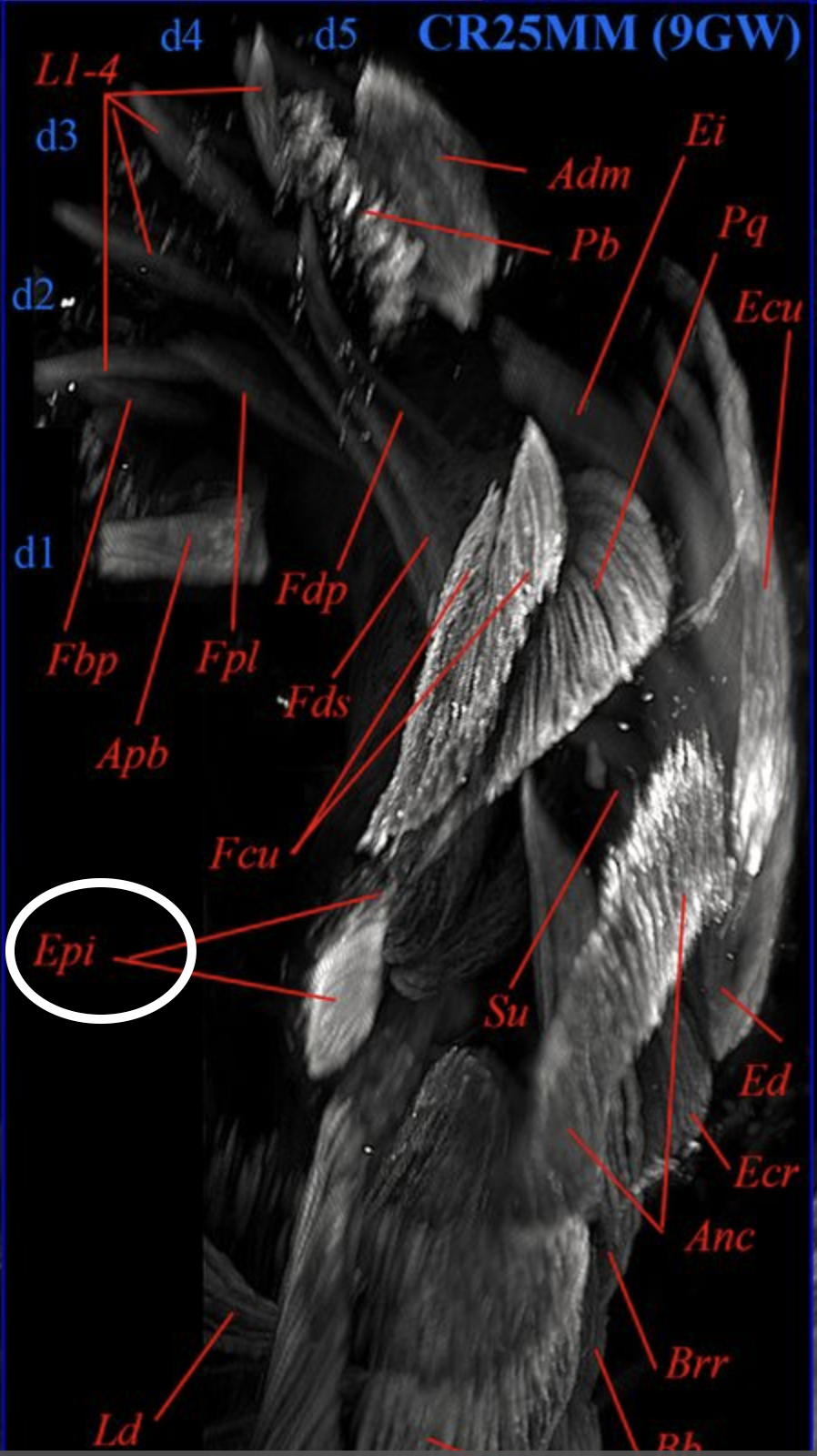 This muscle must have become nonfunctional, and reduced in development, over the last six million years or so, when the common ancestor of humans and chimps gave rise to our separate lineages.

An interesting sidelight of this study is that some of these vestigial muscles occur as rare variants in adult humans, either via developmental “accidents” or as part of congenital malformations. Presumably these screwups in development block the genetic changes that normally lead to the suppression and disappearance of muscles in embryos. Variable expression of vestigial traits is common in organisms where the traits haven’t evolved into something else that’s useful. (For more on human vestigial traits, see the Wikipedia article on “human vestigiality”). The authors note that when the muscles do appear in adults, they are “functionally neutral, not providing any type of major functional advantage or disadvantage.”

The presence of these vestigial muscles is pretty irrefutable evidence of evolution and common ancestry, for there’s no reason why either God or an Intelligent Designer (a pseudonym for “God” to ID advocates) would put a transitory muscle in a human fetus that’s of no use whatsoever, but just happens to resemble the fetal muscles that goes on to develop into adult muscles in our relatives.  I wonder how creationists, including IDers, will explain this as the work of a designer. Will they say the muscles are really functional in a fetus? If so, why do they disappear? And doesn’t the fact that they go on to develop into functional muscles in our relatives like chimps and reptiles say something about common ancestry?

1.) The order of appearance of these muscles in development doesn’t completely comport with their order of evolution. This shows that the “recapitulation theory”—that the order of development mimics the order of evolution—isn’t completely obeyed. But we’ve known that for a long time. The time of appearance of a trait in development can be changed by other factors, like its usefulness in “priming” the development of other features. But this doesn’t overturn the very strong conclusion that the presence of transitory muscles in the human fetus that remain in adults of our relatives is evidence for evolution.

These differences support the emerging idea that the topological similarities between the hand and foot of tetrapods, such as humans, are mainly secondary (see recent reviews by Diogo et al., 2013, 2018; Diogo and Molnar, 2014; Sears et al., 2015; Miyashita and Diogo, 2016). This idea is further supported by the fact that the order of developmental appearance of the hand muscles is markedly different from that of the corresponding foot muscles (Tables 6, 7). As an illustrative example, whereas the lumbricales are the first muscles to differentiate in the hand, together with the contrahentes (Table 6), in the foot the lumbricales differentiate only after most other foot muscles are already differentiated (Table 7). Thus, these developmental data and evidence from comparative anatomy and from the evolutionary history of human limb muscles (see Tables 6, 7) indicate that several of the muscles that seem to be topologically similar in the human upper and lower limbs actually appeared at different evolutionary times; appear in a markedly different ontogenetic order; derive from different primordia; and/or are formed by the fusion of different developmental units in each limb.

Now the authors didn’t do this study to demonstrate evolution; like most rational people, they accepted it long ago. Rather, their stated aim was to “build an atlas of human development comprising 3D images. . . that can be used by developmental biologists and comparative anatomists, as well as by professors, students, physicians/pathologists and the broader public.” But one of the bonuses, especially for the broader public, is the very clear demonstration of the common-ancestry tenet of modern evolutionary theory.