As one of my friends used to say each morning, “Grease the new day!” It’s a new week, too: Monday, September 9, 2019, and National “I Love Food” Day. But of course Americans love food too much, and we had a post on that issue yesterday.  It’s also National Wiener Schnitzel Day (cultural appropriation), National Steak Au Poivre Day (more cultural appropriation), Remembrance for Herman the Cheruscan, and National Teddy Bear Day. Here’s my Teddy, which I’ve had since I’ve been born. His name is Toasty. My mother covered his nudity by giving him a pair of overalls. Most of his fur is rubbed off and his eyes have been replaced several times. Toasty still resides in my office. 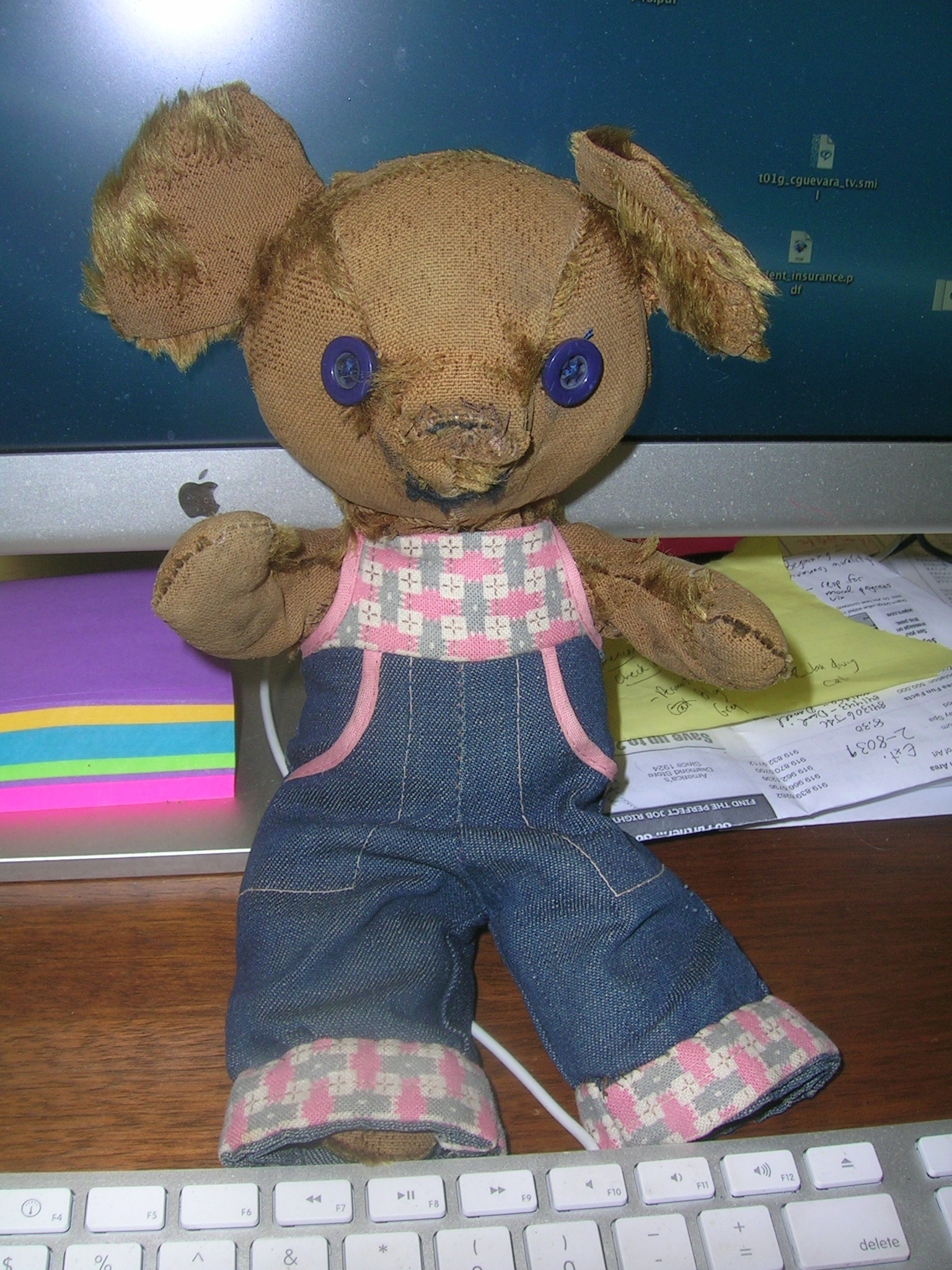 Offer: a reader has a free ticket to a tour of the Thornton Quarry in Thornton Illinois, just south of Chicago. The tickets were ordered all of five years ago, and the tour is on October 5 at 9 a.m. At the end there will be a half hour for fossil hunting (I don’t know which geological period). If you’re interested in this freebie, contact me.

Stuff that happened on September 9 includes:

Herschel was a polymath, two of his “maths” being astronomy and photography. Here’s that photo, with the Wikipedia description, “Herschel’s first glass-plate photograph, dated 9 September 1839, showing the 40-foot telescope.” 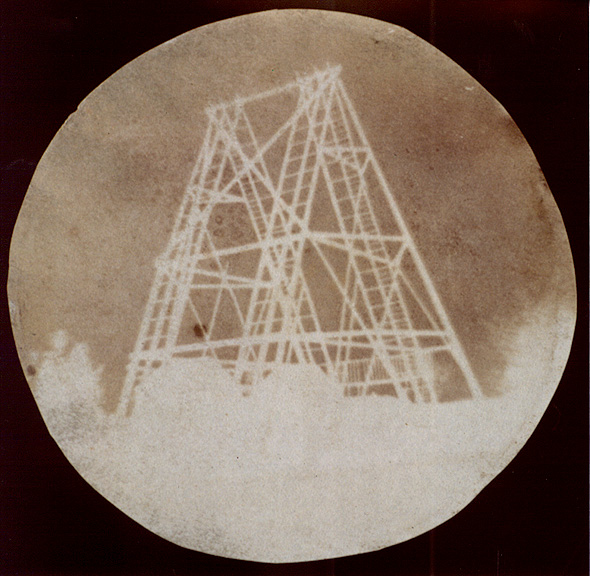 The remote operation involved sending a message to a computer in New York from a conference at Dartmouth.

The floatplane was launched from a submarine equipped with an on-deck aircraft hanger, and the bombing guy was Nobuo Fujita, flying a Yokosuka E14Y “Glen” seaplane. No damage was done; this was one of only a handful of times that the mainland U.S. was attacked by an enemy in World War II. Here’s Fujita and his bombing plane: 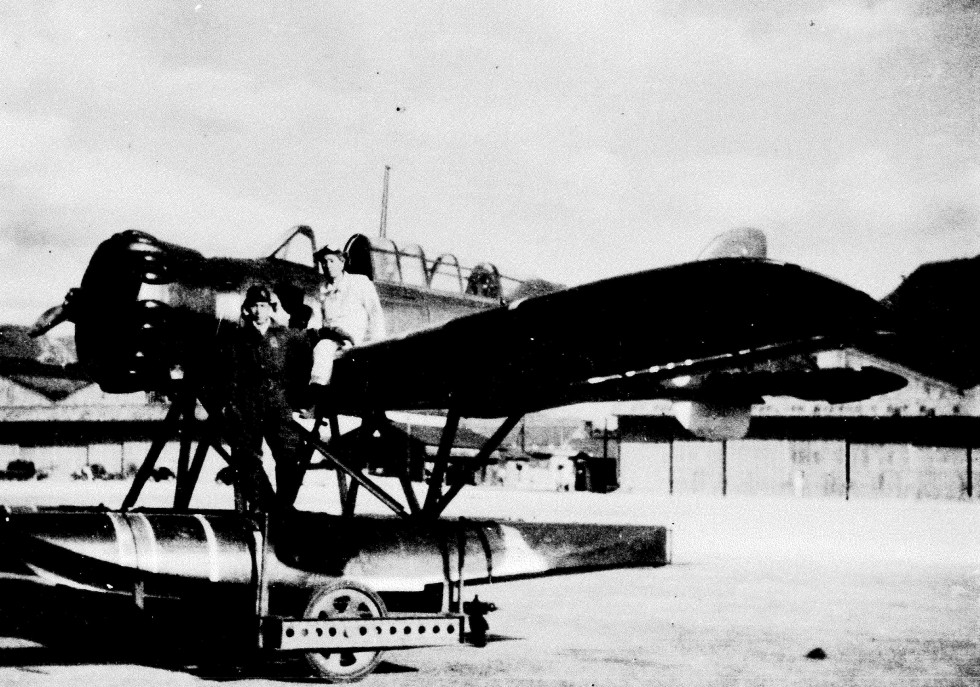 Here’s Elvis on that show. Note that they show his salacious swiveling hips, though they weren’t shown in a subsequent appearance on the show:

Yes, this was the Bligh who was captain of HMS Bounty and was set adrift after a mutiny. He made it to safety, and had a distinguished career.

Kerr created the Africanized honey bee, which became the killer bee after one of his assistants accidentally set it loose in 1957.

Those who died on this day include:

I couldn’t find any cat paintings by Toulouse-Lautrec, one of my favorite artists, but here’s a d*g he painted in 1881, “Margot”: 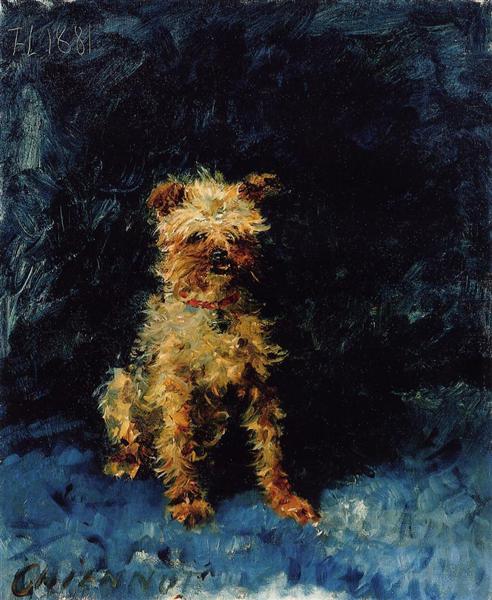 Meanwhile in Dobrzyn, it looks as if Hili is off to Evergreen State:

Hili: I’m outraged.
A: What about?
Hili: I’m just trying to figure that out. 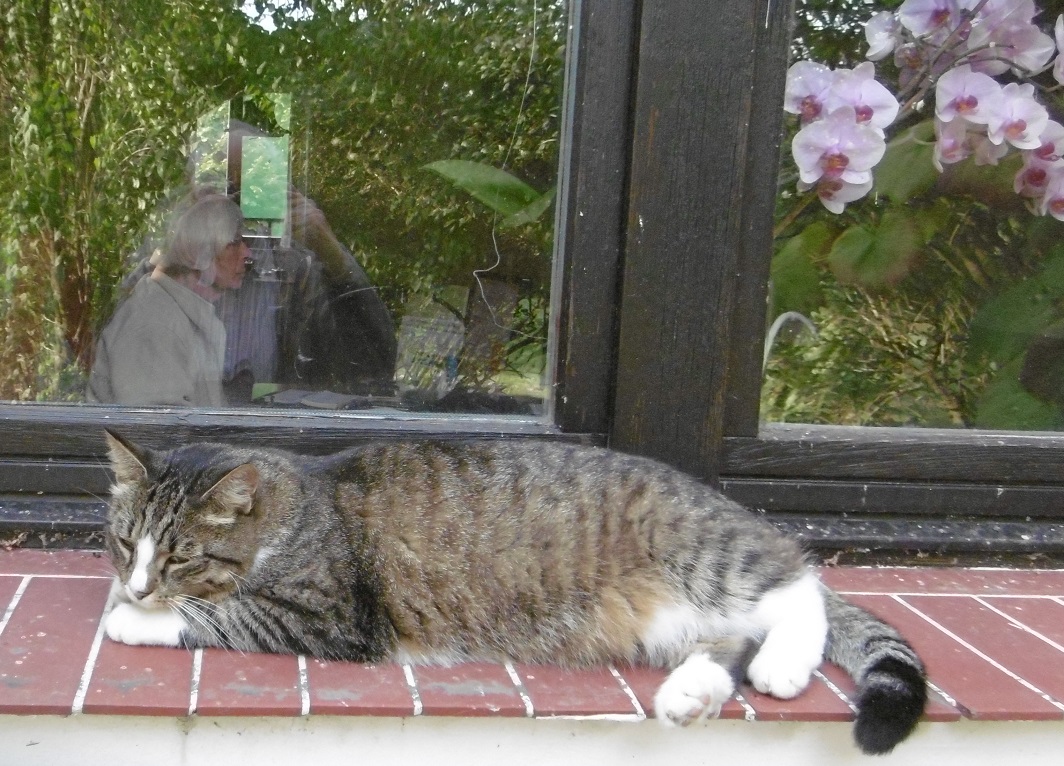 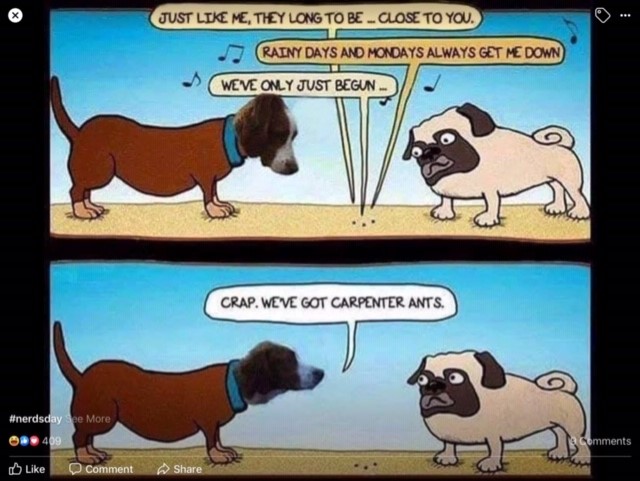 The first millisecond after I saw this, I thought it was a flock of hummingbirds feeding. From Amazing Things, with the caption, “Crotalaria cunninghamii, also known as green birdflower or regal birdflower, a plant of the legume family Fabaceae native to inland northern Australia. Photo: @Beth_Kin”: 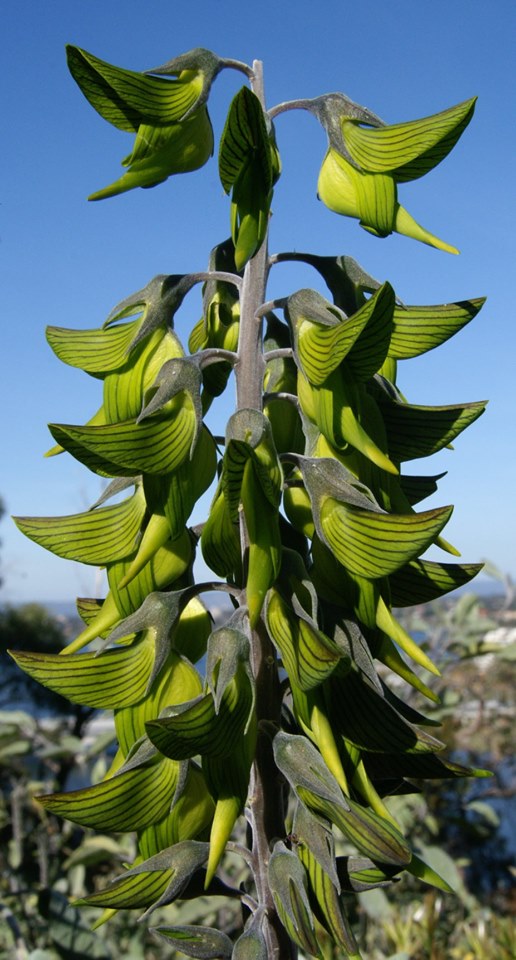 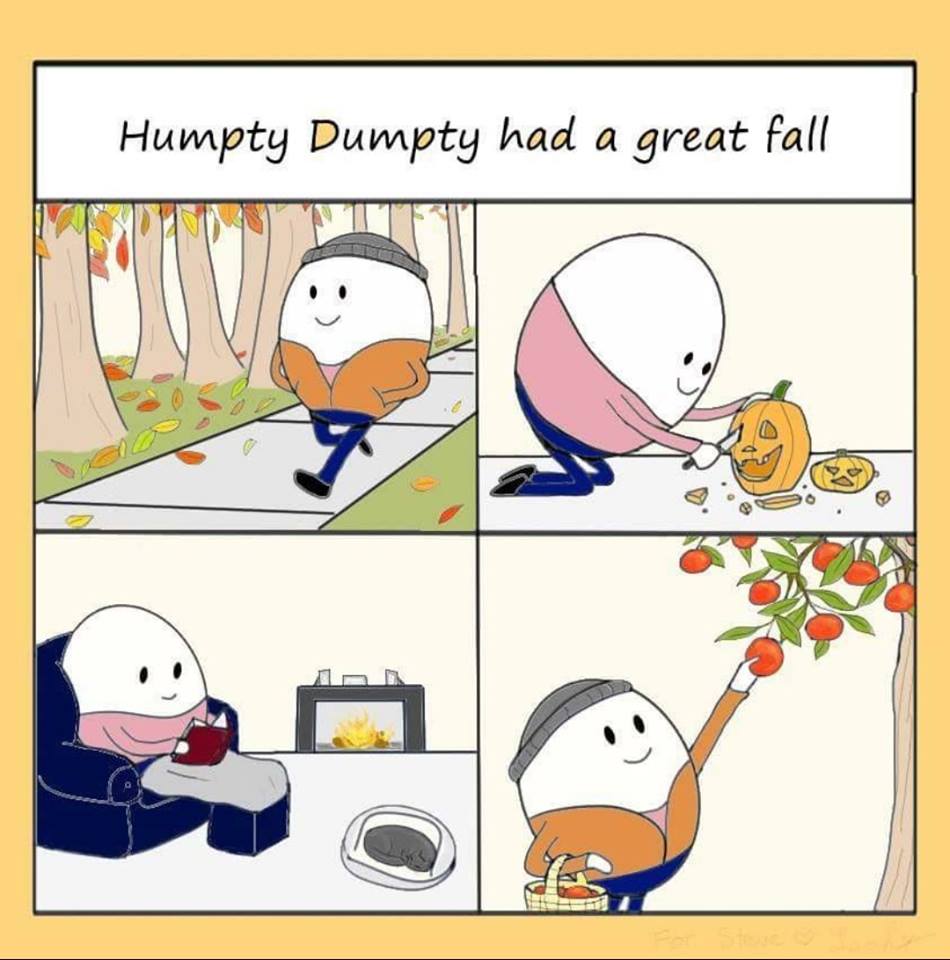 Grania sent me this tweet on April 7. I had no idea horseshoe crabs swam this way:

From Orli: a hoax with a poet writing Titania McGrath poems to scam a woke poetry journal. Read the thread, too.

All you basically have to do to be an acclaimed Canadian "poet" like Rupi Kaur is claim you have some protected identity and write some shitty "poems" about your vagina or something.

I spent like fifteen minutes writing these poems on the bus. The third one is about queefing pic.twitter.com/DvzutOEyKj

Several tweets on gun control from Heather Hastie via Ann German. This “prayers” solution is really making me mad.

Yeah I just tried searching the Harvard Injury Control Research Center's online resource page for "prayer" and nothing comes up. Maybe you should try something else if you want to, y'know, actually save lives. pic.twitter.com/j06Jt1E95y

Four tweets from Matthew Cobb. First, a complex flow diagram about the Brexit mess. Matthew adds “other options are available.”

Headline numbers: chances of a General Election dropping a fraction (7% GE on 15 Oct, 72% 29 Oct or later), as chances Johnson sees it through as Prime Minister until 17 Oct are also slipping pic.twitter.com/DhwsoOt2wY

Knowing this way to write the first three digits of pi might be of some use, but I’m not sure how:

Nothing to see on this floor. Move along please. pic.twitter.com/ghY6FkuBU2