I was just starting to think that because Trump had finally made so many missteps,  and because so many Republican legislators are bowing out of 2020 re-election bids, that maybe we Democrats had a chance to recapture the White House (and perhaps the Senate?) in 2020.  And then along comes New York Times columnist David Leonardt, a thoughtful and Left-leaning writer, to warn us that the Democratic candidates for President (well, at least two of them) are pushing policies that, as I’ve noted previously, weren’t popular with Americans in general. (This is a no-brainer; many people, as well as several polls, have noted it.)

The two areas are immigration and healthcare, as discussed in Leonhardt’s new column below.

So, on to Leonhardt’s views, and some depressing data:

Over the past two decades, incomes for most Americans have barely grown. Median wealth has declined. Americans are frustrated, and a majority supports a populist agenda: higher taxes on corporations and the rich, expanded government health care and financial aid, a higher minimum wage, even a Green New Deal.

The Democrats are on solid ground, substantively and politically, by pushing all of these issues. They should be casting Trump as a plutocrat in populist’s clothes, who has used the presidency to enrich himself and other wealthy insiders at the expense of hard-working middle-class families. It’s a caricature that has the benefit of truth. When pundits yearn for economic triangulation, they’re the ones confusing their own policy preferences with good political advice.

The mistake that Democratic candidates have made is thinking that just because they should activate their progressive id on some issues, they should do so on all issues.

There are two main examples, both of which have received a lot of airtime during the presidential debates. The first is the idea of decriminalizing border crossings, so that the illegal entry into this country would be only a civil violation. Most top Democratic candidates — Cory Booker, Julián Castro, Kamala Harris, Bernie Sanders and Elizabeth Warren — support the idea. If illegal entry weren’t a crime, they say, Trump couldn’t lock people in cages.

Supporters of the idea make intricate, technocratic arguments about how decriminalization won’t make the border less secure. But most voters tune out. They don’t buy the long explanations for why the policy doesn’t mean what it certainly seems to mean: less border enforcement. In an NPR/PBS NewsHour/Marist Poll, 67 percent of registered voters called decriminalization “a bad idea.”

Indeed, and it’s easy to get the idea that most candidate Dems (Biden seems to be an exception) really do want open borders—or something close to it. That’s certainly true of two of the top three candidates right now (the other two are Sanders and Warren). The rest of the Dems seem loath to discuss it honestly for fear of alienating what they think are their supporters.
And then there’s healthcare, again with Biden as the exception in the trio:

The second example is a proposal to eliminate private health insurance and require people to have Medicare. Sanders and Warren back it. Again, supporters offer complex arguments about why Americans will love this idea (especially if it’s phrased in just the right way) — and, again, most Americans say no thanks. They’re dealing with enough economic anxiety, without having their health insurance taken away and replaced by something uncertain.

Leonhardt then presents two graphs showing how the Dems seem to be increasingly out of step with some major concerns of the average American. This is deeply depressing given what a mockery Trump has made of the Presidency and the executive branch in just the last few months. The top half shows four issues on which more registered voters think that some “progressive” Democratic policies are bad rather than good ideas. Slavery reparations I don’t see as a deciding issue for most voters, but the other three certainly are: 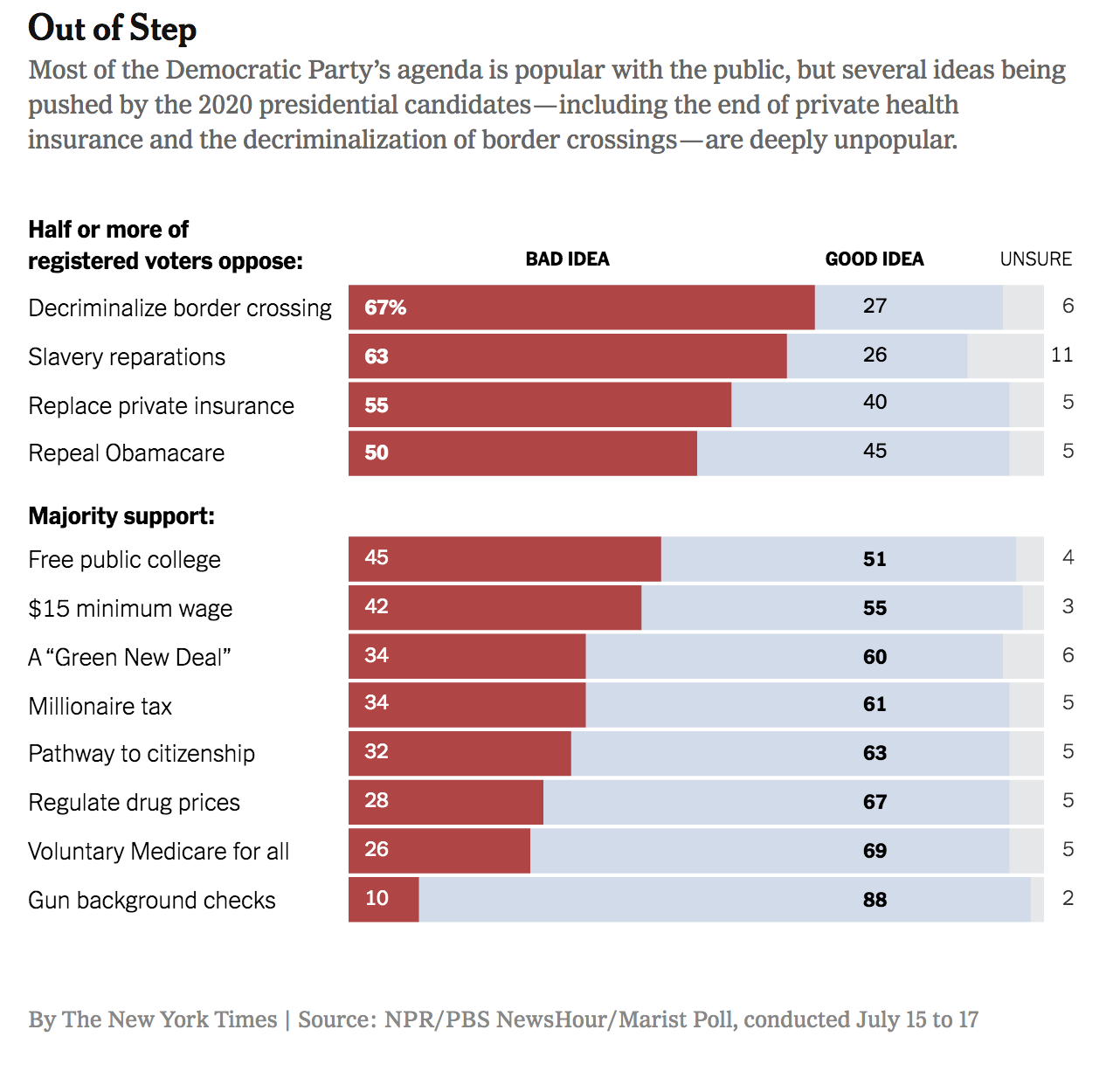 And, surprisingly in view of Trump’s continuing malfeasance, both parties now are viewed as equally good or bad by Americans—while Democrats had the advantage just a year ago. 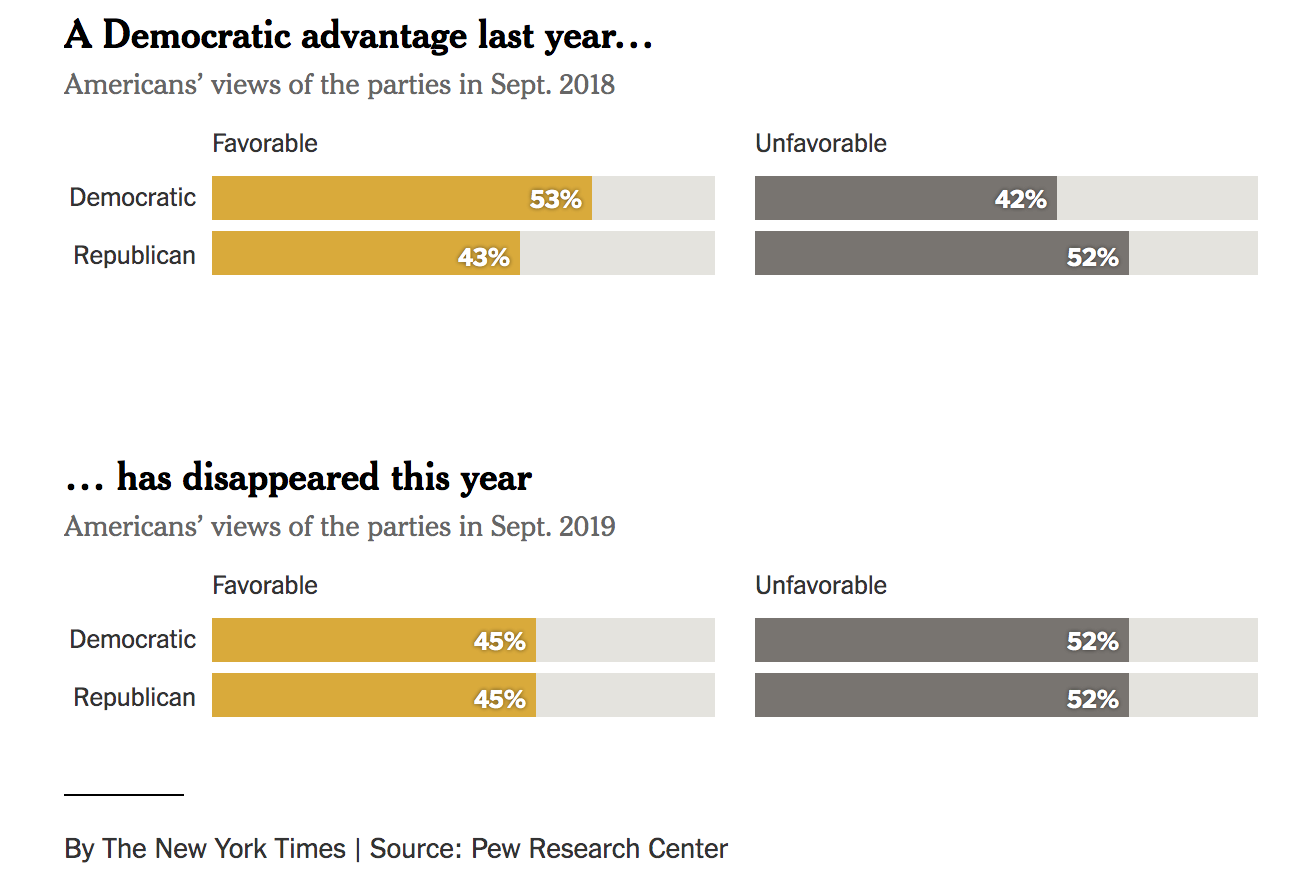 Now it’s not clear why this is. After all, look how Trump has screwed up nearly everything in the past two years. Leonhardt (again, who’s best seen as a liberal) thinks it’s because the Dems are out of step with the public on a few issues, but who knows? I do know that I was getting complacent about Trump losing, and now I’m worried again.

Leonhardt ends his column with that warning:

In many fields — politics, business, the military, sports — successful leaders ask themselves what their opponent wants them to do, and then do the opposite. If Democrats at this week’s debate keep talking about border decriminalization and mandatory Medicare, I know that many well-meaning liberals will be happy. But I can think of someone else who will also be happy: Donald Trump.

Trump may be good at one thing: getting Democrats to adopt policies that he knows will make centrist voters uncomfortable. Among all the candidates in the lead right now, Biden looks to me the most viable, though he’s lost some ground recently. Of the three leaders, who would I rather have be President? Probably Elizabeth Warren.  But unless she shifts her stands on the worrying issues above, I don’t think she can beat Trump.

Now I’m not a pundit like Leonhardt, nor do I have a deep grasp of American politics. I’m just an average American with an average American’s knowledge of what the candidates seem to represent. I’ll vote for any Democrat over Trump, but were I a centrist or a right-centrist, Warren’s and Sander’s stands on immigration and, especially, healthcare, would worry me.

Oh, and read Matti Friedman’s column on “repressed memory” and the Israeli elections.

134 thoughts on “Are the Democrats too radical for America?”