As you know, “President” Trump issued some disgusting tweets the other day, telling the four Justice Democrats—Representatives Ilhan Omar, Alexandria Ocasio-Cortez, Rashida Tlaib, and Ayanna Pressley (he didn’t mention names, but it’s clear who he meant— to “go back to where they came from”. Here is some of what he said, and the New York Times has a story about the fracas. 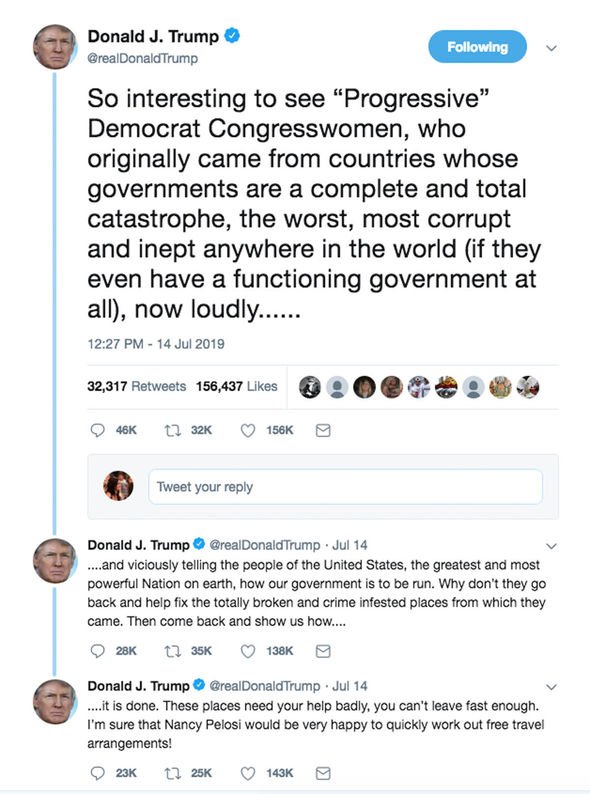 This is, as usual, completely unworthy of a President, and reminds me of the old, bigoted calls for people to “go back to where they came from” if they’re foreigners you don’t like. But not even foreigners! When I was an antiwar activist in the Sixties, a lot of us were advised, “Why don’t you just go over to North Vietnam?” The trope then about America was “Love it or leave it.”

And the racist calls for blacks to go back to Africa are a well known facet of this bigotry. When I was a kid, a friend and I mustered up our courage to visit the American Nazi Party Headquarters—a small house in Arlington, Virginia owned by George Lincoln Rockwell. It was way scary, but I wanted to see what a real Nazi looked like. They gave us a bunch of literature, and I remember one item: a set of “Coon-Ard Boat Tickets to Africa”, emphasizing the Nazis’ desire to kick out African-Americans.

These tweets, and this confrontation, are shameful and reprehensible: low even by Trump standards.  I feel that I must call this out here because, although my writings on this site should make my hatred of Trump obvious, some readers have faulted me for not being sufficiently anti-Trump. I’ve explained why: the entire left-wing media and centrist media are already going after Trump for this, and I’m not saying anything novel by adding my voice to the chorus. But I emphasize that I’m singing with them. And this episode was especially shameful.

I also decry the fact that almost no Republicans have condemned Trump for his latest episode of bigotry (CNN lists only 18, including Mitt Romney); that is equally shameful.  When Republicans can’t bring themselves to call out bald-faced bigotry, it’s time to write most of them off.

Yet as ashamed as I am of this President, and of an America who would elect him, I’m also pleased—pleased that this episode will, at least temporarily, unite the Democrats, who are rightfully supporting the four Justice Democrats against this Presidential tirade. Will this unite the party now? I hope so, but I don’t think so. For you also know that I see the Justice Democrats as entitled and inexperienced social-media mavens who would rather incite their followers to feed their narcissism than enact legislation. They engage in unproductive identity politics that, I fear, will help push support towards Trump.

I will continue to call out what some call the “progressive Democrats” if they do what I don’t much like. But, for the moment, I support them in fighting the bigotry of our “President”, who not only has once again shown his true colors, but may have eroded some of his own support.  After all, surely some Republican voters will be alienated by the “go back to your own country” mantra. And, of course, among the four, only Omar wasn’t born in the U.S. All are American citizens, who have the right (and the duty) to criticize their own country as they see fit. And, as Representatives, it’s their job to determine how the government, the legislative branch, is to be run.