Reader Gregory called my attention to a tweet from a Ph.D. student at Harvard calling attention to a new paper that was just put on the internet. It shows that, for those who survived trauma, there’s no evidence that trigger warnings reduce anxiety, and may even be harmful.

Our new preregistered paper on trigger warnings in trauma survivors was just released as a preprint! We find that no matter how you slice it, trigger warnings just don't help. https://t.co/FylGbZYXhZ (1/8)

While there’s no indication that the paper has yet been accepted for publication, preprints are increasingly appearing before they show up in professional journals, and this is one of them. You can download it by clicking on the link below: 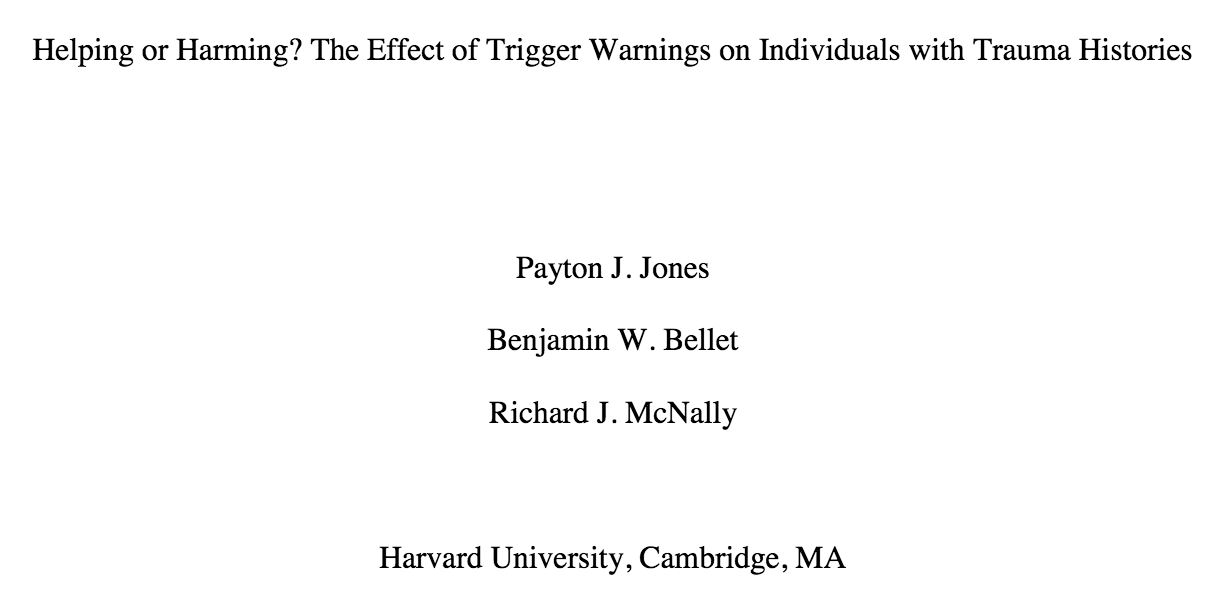 While trigger warning have been promoted for creating “inclusivity” and reducing trauma, critics decry them for impeding education and instilling victimization in people, especially survivors of trauma. But the pro-trigger-warning arguments have been based on what people feel is right, not on data. In fact, as the authors conclude from a useful summary of previous work, there is no evidence that putting trigger warnings before exposure to potentially damaging material reduces anxiety at all, and some evidence that the warnings may exacerbate anxiety. (The authors’ table of relevant literature is very useful.)

These earlier studies, however, were limited to people who hadn’t experienced trauma—neglecting the very people at whom trigger warnings are aimed. After all, the goal of such warnings is to avoid re-traumatizing people by exposing them without warning to subjects that damaged them psychologically, from incidents that even gave them PTSD.

I won’t go into detail about the rather complicated methodology of the paper, which uses numerous analyses, controls, and measurements. Suffice it to say that the subjects (451 of them) were surveyed for things like degree of trauma (all had been traumatized), psychological diagnoses, nature of their trauma, various demographic variables, and so on. They were then exposed to three types of readings, with or without (control) trigger warnings: “neutral” readings (like a character description from Moby-Dick), “mildly distressing” (like a description of a battle but without gore), or “markedly distressing” (characterized as things like “graphic scenes of violence, injury or death; e.g., the murder scene from Dostoevsky’s Crime and Punishment”). The trigger warnings that were issued half the time were these:

TRIGGER WARNING: The passage you are about to read contains disturbing content and may trigger an anxiety response, especially in those who have a history of trauma.

The authors’ null hypothesis was that the effect of trigger warnings—effects on things like anxiety or perceived centrality of trauma in your personality—was zero.

In general, then, the authors showed that there’s not much of an effect of trigger warnings one way or the other, and the “way” they work is usually counterproductive but insignificantly so. Nor did the type of trauma an individual experienced have any effect on this conclusion.

There were, however, two effects—and counterproductive ones. The first is this:

And there’s also a bit of evidence that trigger warnings increase anxiety for trauma suffers who also have PTSD.

These results are clearly counterproductive to the aims of having trigger warnings. Because of these results, and mainly because there was no evidence that trigger warnings had any of the intended effects, the authors conclude that “If there is no good reason to deploy [trigger warnings] in the first place, we need not require strong evidence of harm before abandoning them.”  If they’re not helpful, and can even do some harm, as well as imbue people with a stronger victimhood narrative, then why use them? According to this paper, we shouldn’t.

Will this paper have any effect? Will colleges abandon trigger warnings? I wouldn’t count on it. Since when has evidence ever changed the mind of the woke? That said, even if the traumatized aren’t helped by such warnings, I would probably still let students know if I were showing something gory in class, like someone being beheaded. Fortunately, because I taught evolutionary biology I never had to show stuff like that, nor issue any trigger warnings.