Today, after snorkeling at the nearby Honaunu Bay, I visited the Pu’uhonua O Honaunau National Historical Park, a small but historic abode of Hawaiian royalty and a “place of refuge”.  As the Wikipedia entry notes,

The historical park preserves the site where, up until the early 19th century, Hawaiians who broke a kapu (one of the ancient laws) could avoid certain death by fleeing to this place of refuge or puʻuhonua. The offender would be absolved by a priest and freed to leave. Defeated warriors and non-combatants could also find refuge here during times of battle. The grounds just outside the Great Wall that encloses the puʻuhonua were home to several generations of powerful chiefs.

It was quite intriguing, and among the smallest of America’s national parks. As I was driving away, however, I noticed this in the parking lot within the Park boundaries: 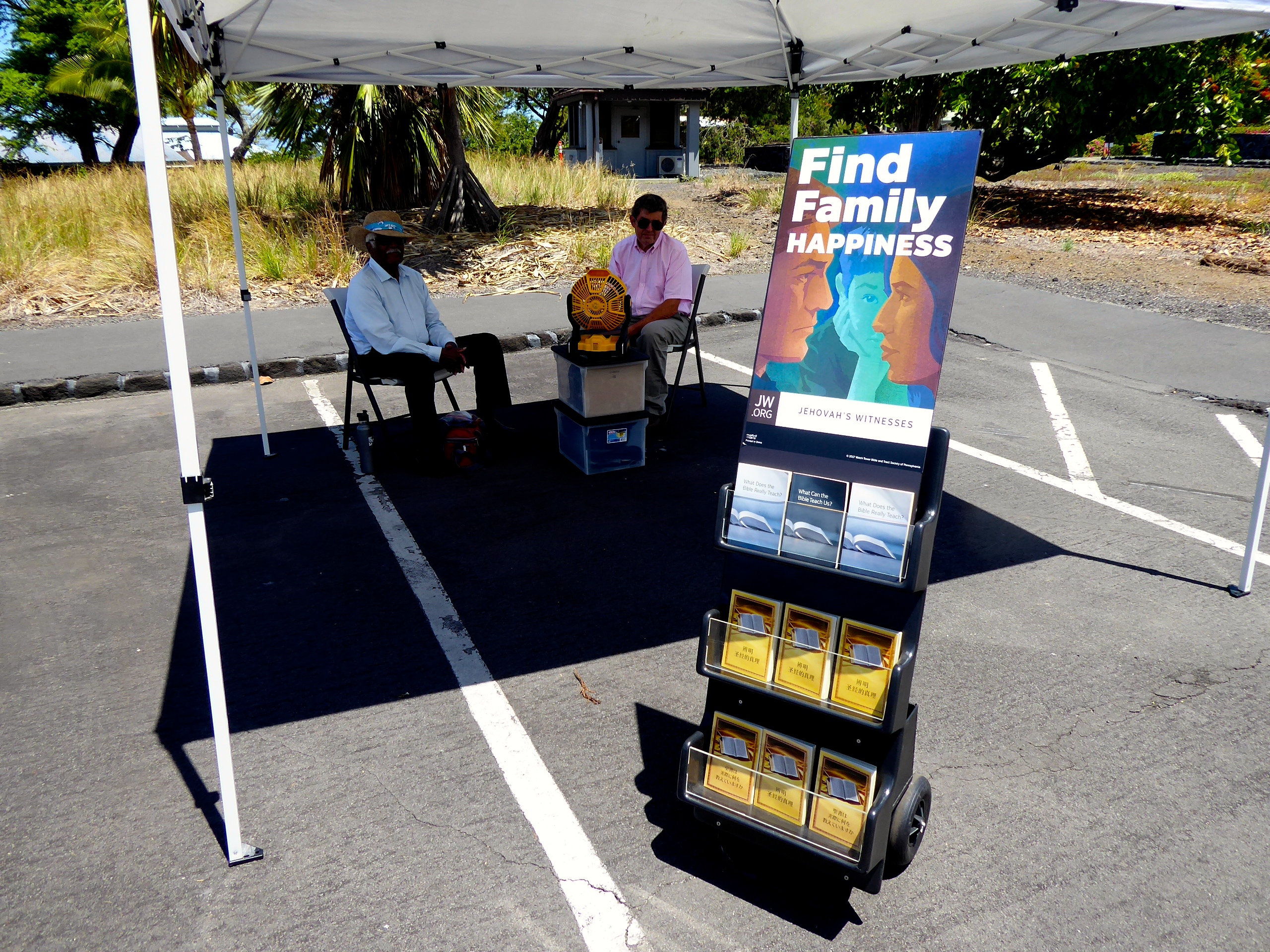 Yes, you got it: two Jehovah’s Witnesses in full proselytizing mode, complete with help-yourself leaflets.

I couldn’t help myself: I went up to the two men in the photo and asked them if they had permission to set up shop within a National Park. They said “yes”, and when I asked them who gave them permission, they replied, “the park rangers” and pointed to the ranger station just across the road.

I could not do otherwise: I went into the ranger station to try to verify what the Witnesses had told me. I encountered two young rangers and asked them if the proselytizers did indeed have permission to set up religious shop within park boundaries. They were a bit confused, but said that there was some “First Amendment” rule that parks could indeed set aside space for this.

That confused me even more, for although it’s possible that one could demonstrate within Park boundaries and express free speech, the First Amendment also prohibits government entanglement with religion. And if anything represents government entanglement with religion, the JW literature stand does. But the two young rangers said they’d get someone higher up to answer my question.

An older woman ranger, whose name I can’t recall, came out to answer my question. When I told her what I wanted, she said that I should step outside the station and she would answer me. I found that very odd: why couldn’t she answer my question inside the ranger station, and in the presence of her subordinates? Not only that, but she then locked the station from the outside with a key.

She then explained to me what the younger rangers had told me: that there was a provision, determined by each park separately, to set aside part of National Park space for people to exercise their First Amendment rights. When I explained to her that the First Amendment prohibited entanglement of religion and government, and that the JW stand sure looked like such entanglement, she just repeated herself. (This ranger, for purposes of identification, was on duty at about 11:30 a.m on July 3.)

I asked if any religion other than Jehovah’s Witnesses had ever had a station for proselytizing in this park. She said that, as far as she could remember, no.

She told me that she would email me the information about why proselytizing was allowed on Park property, and so I gave her my name and email address. I also told her I was on the Honorary Board of Directors of the Freedom from Religion Foundation (FFRF), and didn’t think what was happening was constitutional.

Of course it may be legal, and I await the material the ranger promised send me. But even if it is legal, it’s still palpably unconstitutional. No religion should have the right to set up shop in a National Park and distribute its literature to the visitors. That is clearly excessive involvement of government (which runs the National Parks system) with religion.

Stay tuned. I have of course reported this to the FFRF and await the ranger’s email. But I sure didn’t think I’d get involved in a First Amendment kerfuffle on my vacation!

59 thoughts on “Is a National Park violating the First Amendment?”