Welcome to the first Tuesday of Summer: Tuesday, June 25, 2019. It’s National Strawberry Parfait Day, though I’d much prefer a strawberry pie à la Anna Miller’s, and also World Vitiligo Day, calling awareness to that disease (I wasn’t aware that the cause of this disease was unknown, though there’s speculation it’s an autoimmune disease in which the body attacks its own skin-pigmentation cells. Fortunately, the effects of the disease seem limited to affecting skin color and not other aspects of health.)

News flash: I’m informed by my fellow duck farmers that yet another brood of newly hatched ducklings, a total of nine, entered Botany Pond this morning. There are now three hens and 27 ducklings in the water. While we have the noms to take care of them all, this is an unexpected (and unwanted) appearance of new ducklings. Of course we will strive to bring them all to fledging, but surely some tsouris is in store! Will everybody get along? Stay tuned.

The U.S. beat Spain 2-1 in yesterday’s Women’s World Cup soccer match, and so it’s on to a game with France for the quarter finals on Friday. Here are the highlights of the U.S./Spain game. You may have to click through to watch this video on YouTube.

Here’s what happened on June 25s:

Here’s that photo, showing barricades erected by French workers rebelling against a government plan to eliminate some low-paying jobs.

Matthew and I are both huge fans of Krazy Kat, and here is the last strip. Officer Pupp saves Krazy while Ignatz the Mouse looks on, but then Krazy finds a way to navigate the water. 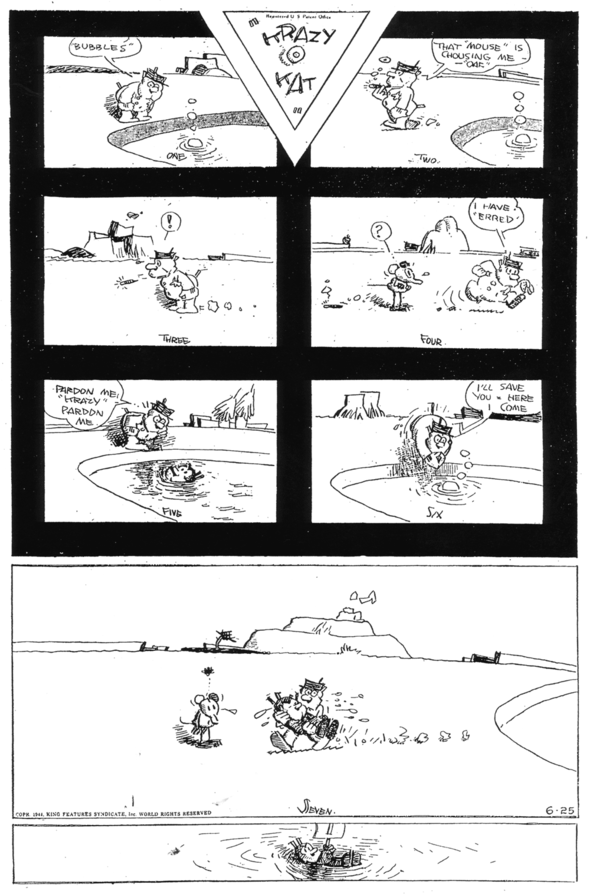 Those who died on June 25 include:

Eakins (1844-1916) is, I think, one of the greatest unappreciated American painters. Here’s one of his paintings, “Kathrin”, featuring a woman playing with a kitten: 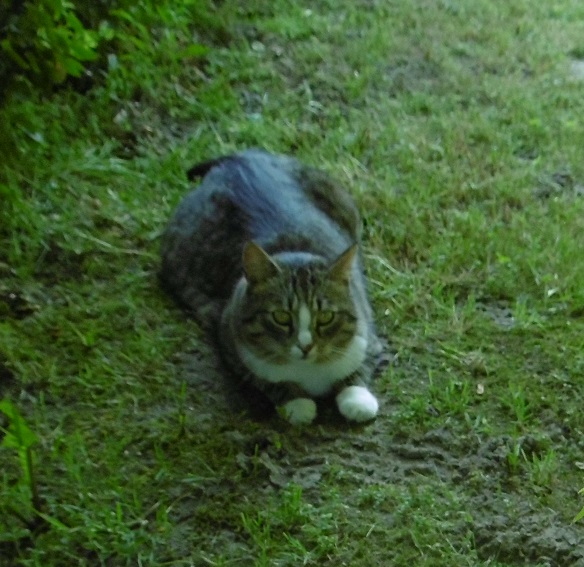 A tweet from reader Peter, who wrote, “If you ever need a cat abducted by a flying saucer than this is for you :)”

Two tweets from the Lost Trove of Grania’s Tweets. The first shows a great view of the Chicago skyline. That’s one of our water-pumping stations in the foreground:

Just when I’m sure I’ve seen every possible photo of the #Chicago skyline, @barrybutler9 proves me wrong. Gorgeous! pic.twitter.com/smb8te1iCe

A superb pun (I may have posted this before):

People of the Pun, may I present today's offering, recognizing that you might have to be of a certain age to get it. pic.twitter.com/pKrdNpEQwq

Two tweets from Heather Hastie. I agree with her characterization of this man, “What a wonderful guy!”

This guy just keeps rescuing cats who got lost in the wildfire months ago 🙌 pic.twitter.com/drp1NSS5Kj

Tweets from Matthew. I’ll try a geeky caption on this one, which will probably be wrong: “Where Tardises come to die.” Yes, I recall that the Tardis wasn’t red.  But someone could make a pile of money by refurbishing these icons and selling them!

A bad pun about a chicken in a weird place:

At first I thought these estimates came from data using genetic variation, but I see it comes from demographic data:

How was Australia first settled? In our new study, we estimate that a minimum of 1,300 people arriving in <900 years was necessary. The picture of only few tiny prehistoric tribes arriving randomly is changing. @cabahCoE @NatureEcoEvo #HumanEvolution https://t.co/jAGTuCH5cT