Quillette is being unfairly demonized in many quarters as an “alt-right” site, with many of those who write there (and that includes me) compared to white supremacists. But the demonization occurs largely because the site doesn’t hew entirely to the ideology of the Woke Left. And yes, there are some conservative positions taken at Quillette, but even a conservative writer can say something sensible. (Does saying that make me equivalent to Joe Biden?)

Below is a link to a piece by Daniel McGraw, who writes for the conservative site Legal Insurrection (click on screenshot to read it). Every day for seven weeks, he attended the civil trial of Oberlin College, accused of defamation by Gibson Bakery and Market, a local store where three African-American students were arrested for shoplifting and assault. The students pleaded guilty, but Oberlin students went wild with rage because they construed this as a case of persecution of black students. They picketed, handed out leaflets, and accused Gibson’s of being a racist store. For a while, Oberlin even broke off commercial dealings with Gibson’s.

Police records presented during the trial, however, show that black students were not at all arrested disproportionately for shoplifting, and there was not a trace of racism in the history of the bakery or its owners.

The lawsuit was based on the fact that the college itself participated in the accusations of racism, which cost Gibson’s a lot of business and about half its revenue. College officials handed out leaflets that were produced on College machines, the student council passed a resolution urging Oberlin to terminate business with Gibson’s, the University indeed stopped business with Gibson’s for a period, and Oberlin’s President issued a weaselly statement implying that the business might indeed have been racist.

Oberlin didn’t have a leg to stand on, and was ultimately found guilty of libel. Gibson’s was awarded 11 million in compensatory damages. On top of that, the jury slapped another 33 million on Oberlin in punitive damages, making a cool 44 million that Oberlin would have to shell out. (This award is likely to be reduced on appeal as Ohio law generally caps punitive damages at twice the amount of compensatory damages.)

If you aren’t fully informed about this case, do read the piece. It demonstrates, at the very least, what the title suggests: to the Woke, facts are disposable if they conflict with your ideology. 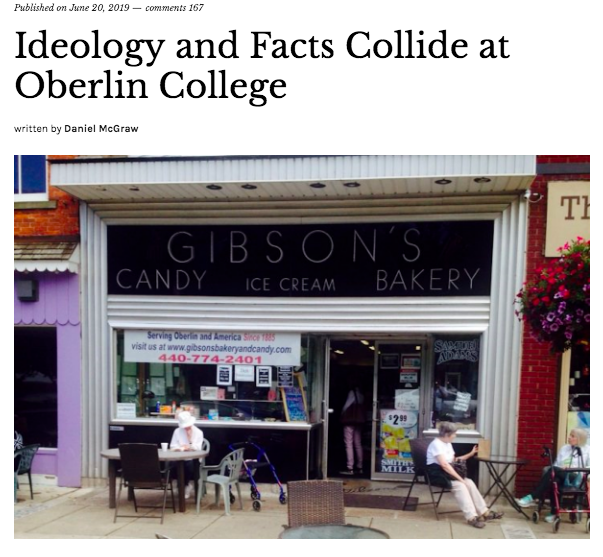 You may already know a lot about this case (everything you need to know is summarized in the above article), but McGraw’s report will enlighten you about things you don’t know, and also serves as a useful one-stop summary of the whole affair. A few excerpts:

But, despite the students’ claims and the vehemence of the language with which they were made, police and others testified that there had been no complaints or allegations of racism made against the family business since it opened in 1885. Not one.

And here are more facts that go against the students’ assertions (do the Woke even care about facts any more?):

Within a week of the protests, the local police produced a report which listed the age and race of every person arrested in Gibson’s for shoplifting between January 2011 and November 2016. These are the numbers: 40 arrests, 33 of which were college students; 32 were white (80 percent), six were African American (15 percent), and two were Asian (5 percent). According to the 2010 U.S. Census numbers, those figures are consistent with the town’s racial composition: 73 percent white, 14.8 percent African American, and 4 percent Asian. During the trial, a black former employee and a black current employee both vehemently defended Gibson’s against accusations of racism, either in the family’s treatment of customers or staff.

. . . As the protests continued, Gibson’s Bakery & Market’s annual revenue almost halved, from about $900,000 in 2016 (from store sales and their cafeteria deal with Oberlin college) to about $500,000 in 2018. Eight full-time employees were reduced to one, and family members have had to forego their salaries (and still do, pending the receipt of damages) since the protests began. The Gibson family testified that all they wanted was for Oberlin College to send an email to the community affirming that Gibson’s was not racist and to move on. But the school refused and doubled down on its support for the protesters and their defamatory allegations.

The judge ruled all videos of the protest inadmissible, since the administrators could not be held accountable for independent student actions. But the allegations of historical racism and discrimination on the flyer and in the student resolution were deemed legally actionable. The trial therefore concerned the truth or falsity of these accusations and the role Oberlin College had played in disseminating them during and immediately after the protests. Truth is an absolute defense against charges of libel and slander. The plaintiffs’ case, therefore, did not relate to the actions of the students. At issue was whether Oberlin College “aided and abetted” false accusations.

And here’s just one of several ways that Oberlin participated in the demonization of Gibson’s:

In an email to co-executives, Ben Jones, the school’s vice president of communications wrote, “I love how these Gibson supporters accuse us of making rash assumption decisions, but are totally blind to their own assumptions.” “Fuck-em,” he concluded. “They’ve made their own bed now.” When Roger Copeland, an Oberlin College professor of theater and dance (he is “emeritus” status now) wrote a letter to the campus newspaper soon after the protests ended, criticizing the school’s treatment of Gibson’s, Jones sent a text message in caps that read, “FUCK ROGER COPELAND.” “Fuck him,” Raimondo agreed in her reply. “I’d say unleash the students if I wasn’t convinced this needs to be put behind us.”

Get that: unleash the students! Things are so bad at Oberlin that the administration sees woke students as a tool to unleash on those they don’t like.

. . . There has been speculation that the verdict will be swiftly overturned on appeal. We shall have to wait and see. But civil tort law is not like criminal law. In order for an appeals court to accept the case, it would need to be convinced that the judge made egregious errors of basic law and/or that the jury ignored evidence in order to arrive at its verdict. From my seat in the courtroom for seven weeks, I didn’t see either.

Two conclusions, one by McGraw himself, showing how mushbrained the Oberlin administration really was:

During the trial, Gibson’s attorneys repeatedly asked the defendants to admit that Gibson’s isn’t racist, and they refused. Had they done so at the first time of asking, before this ever reached the courtroom, they would have spared everyone, not least themselves, a great deal of unnecessary pain. But they couldn’t bring themselves to do it, despite abundant evidence that they were wrong. And, in court, they were unable to explain why.

Oberlin College’s response to the verdict suggests that they are in no mood to learn anything from this pointless ordeal. They cannot come to terms with what has happened because they remain stubbornly committed to an ideological version of events. Things at Oberlin College will not improve until the administration comes to terms with reality.

And this, from a former Oberlin administrator, which I found intriguing:

When I [McGraw] spoke to some Oberlin College alums about this last year, a former administration official said:

Yes, the liberal bent at schools like Oberlin has them thinking a certain way … The difference now is that they don’t encourage discussion and disagreement, they want everyone to be on the same side and that is disheartening. It is about marketing because their enrollment is down.

What has happened in the Gibson case is that the school doesn’t know what to do with its minority students. A freshman from an east coast big city might come to Oberlin and find there is little for a social justice warrior to do in a small town like this, so they get frustrated. And make issues like this shoplifting thing bigger than it should be, and the school follows along.

All schools like Oberlin are going through this, because there are too many schools and not enough enrollment for them, and high tuition prices to deal with. Learning becomes secondary at times to keeping the students happy. This is the dangerous line they are straddling now, and the political climate is adding to it way too much.

This sounds exactly like Williams College (located in remote and rural Williamstown, Massachusetts), where students accuse their school of structural racism when that’s palpably untrue, and wage huge protests over completely inconsequential matters. And in both cases, the administration, trying to avoid trouble and protest, cater to the Woke. But in the long run that only hurts the school’s reputation and income.

23 thoughts on “The Gibson Bakery versus Oberlin College case: a good summary”