Two days ago I did my first beachy thing, but I dislike simply sitting on beaches, even beautiful ones, and prefer going into the water (and it has to be warm) and snorkeling. One of my favorite things to do is snorkel on a tropical reef where you can see beautiful and colorful fishes. It’s like traveling to another planet, which it really is. So far I’ve done that in only two places: Costa Rica and Hawaii.

So there was a visit Lanikai Beach on Wednesday. According to Wikipedia, “This small half-mile strip of beach is consistently ranked among the best beaches in the world.” And indeed, it’s gorgeous, with all hues of blue and green in the water and, luckily, not crowded two days ago: 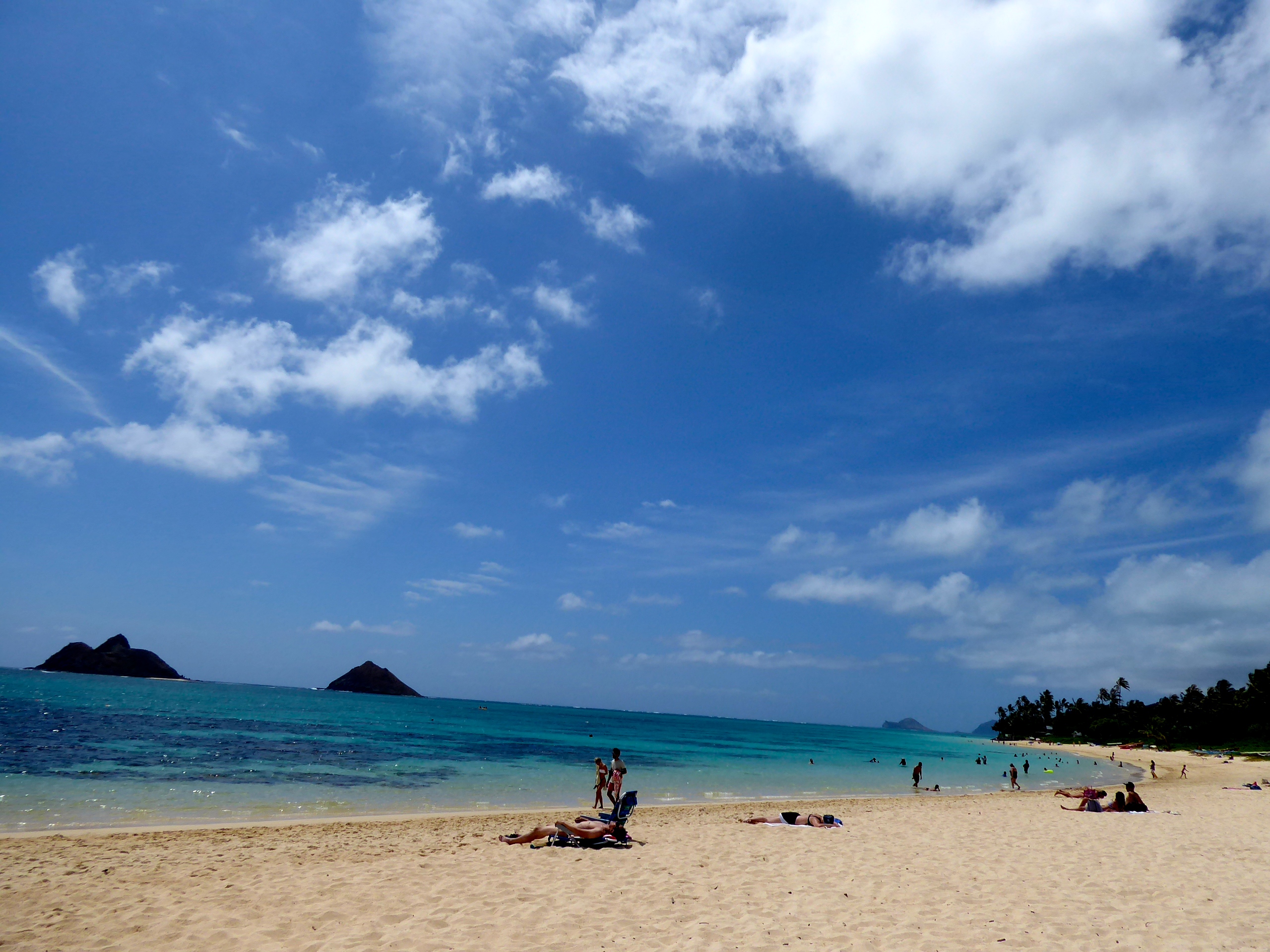 A lone snorkeler. Look at the colors in that water! 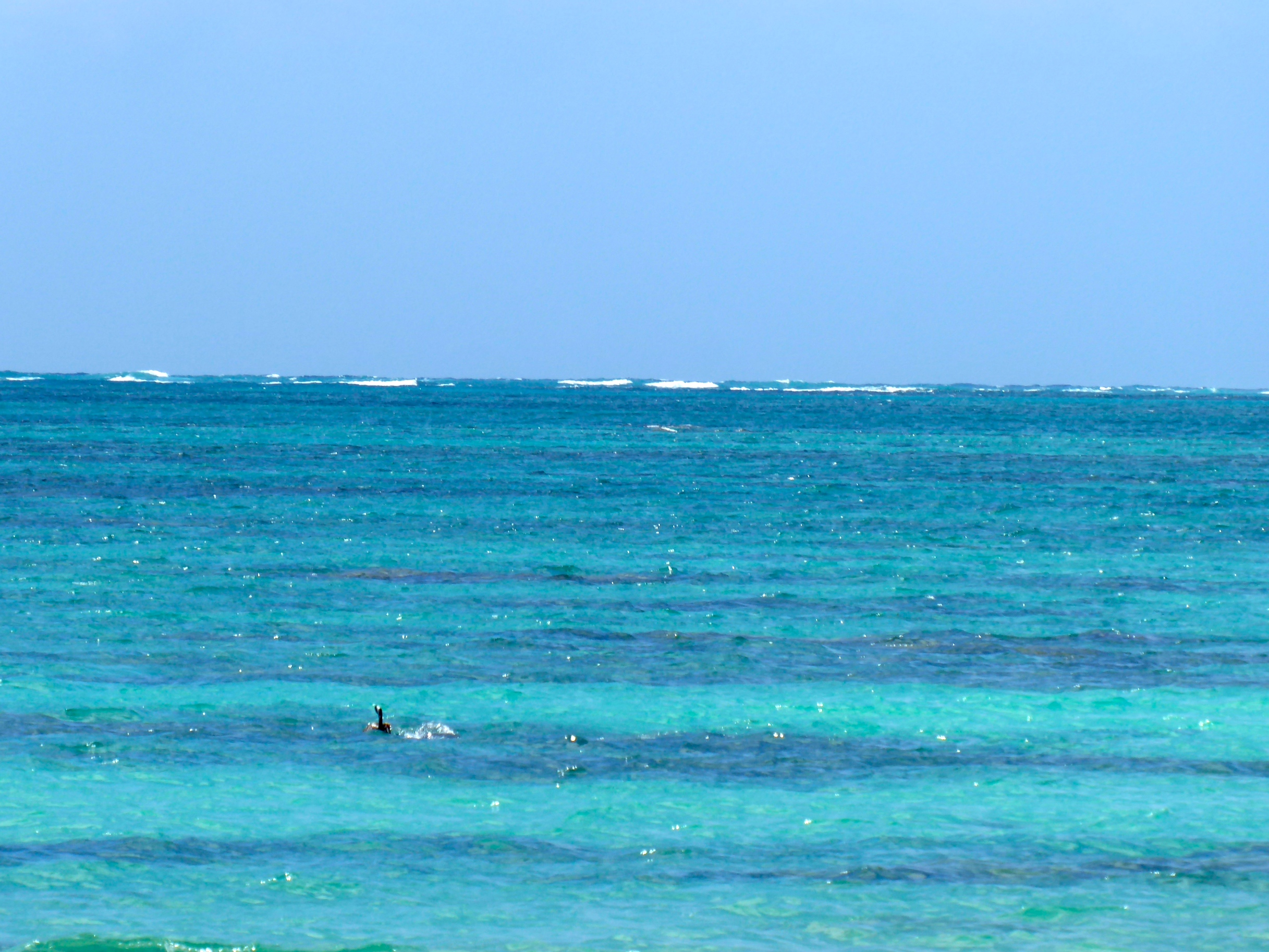 Here are the famous twin islands of Na Mokulua, between 2.7 and 3.9 million years old. And that’s Professor Ceiling Cat in the foreground enjoying the view: 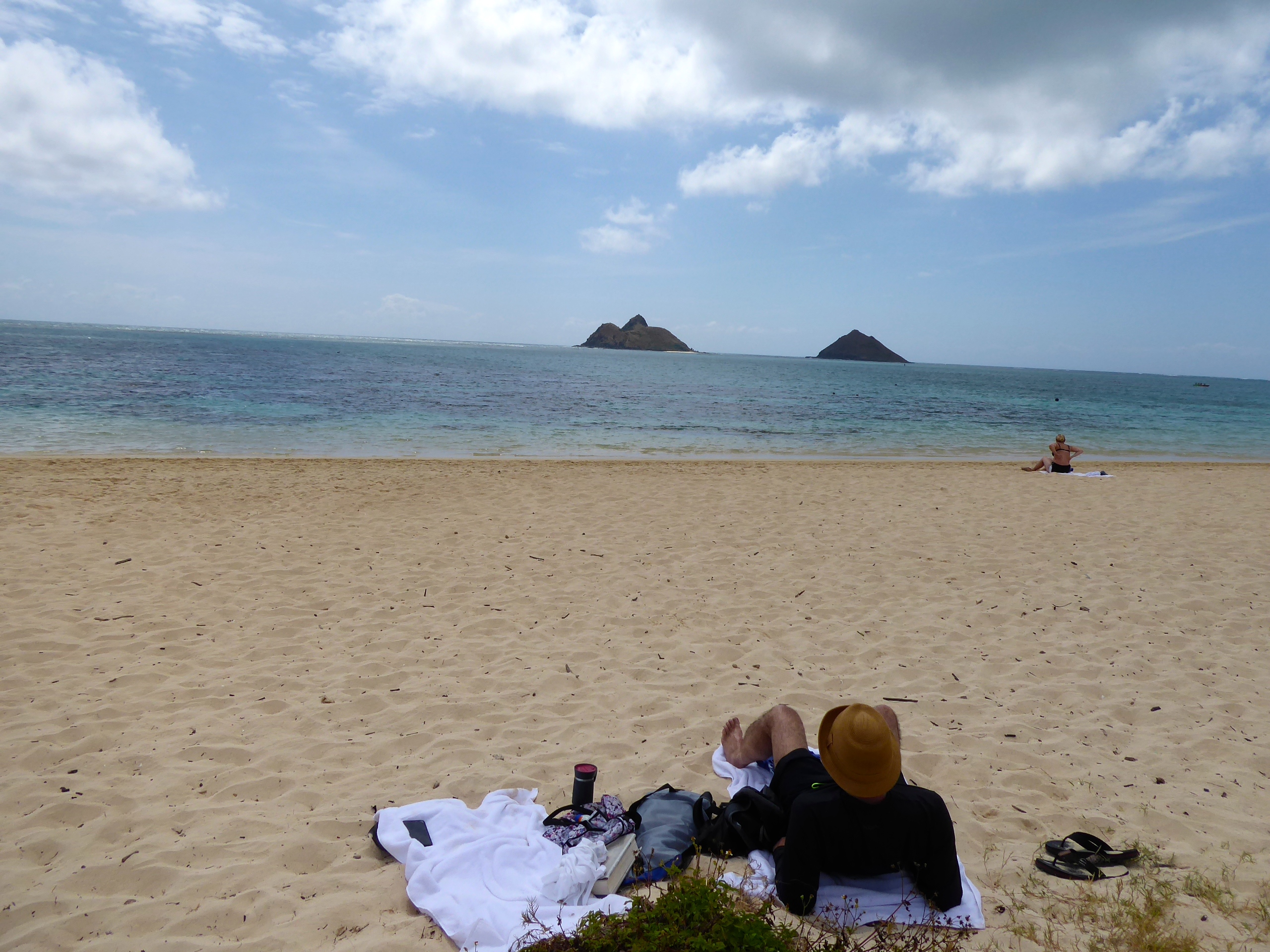 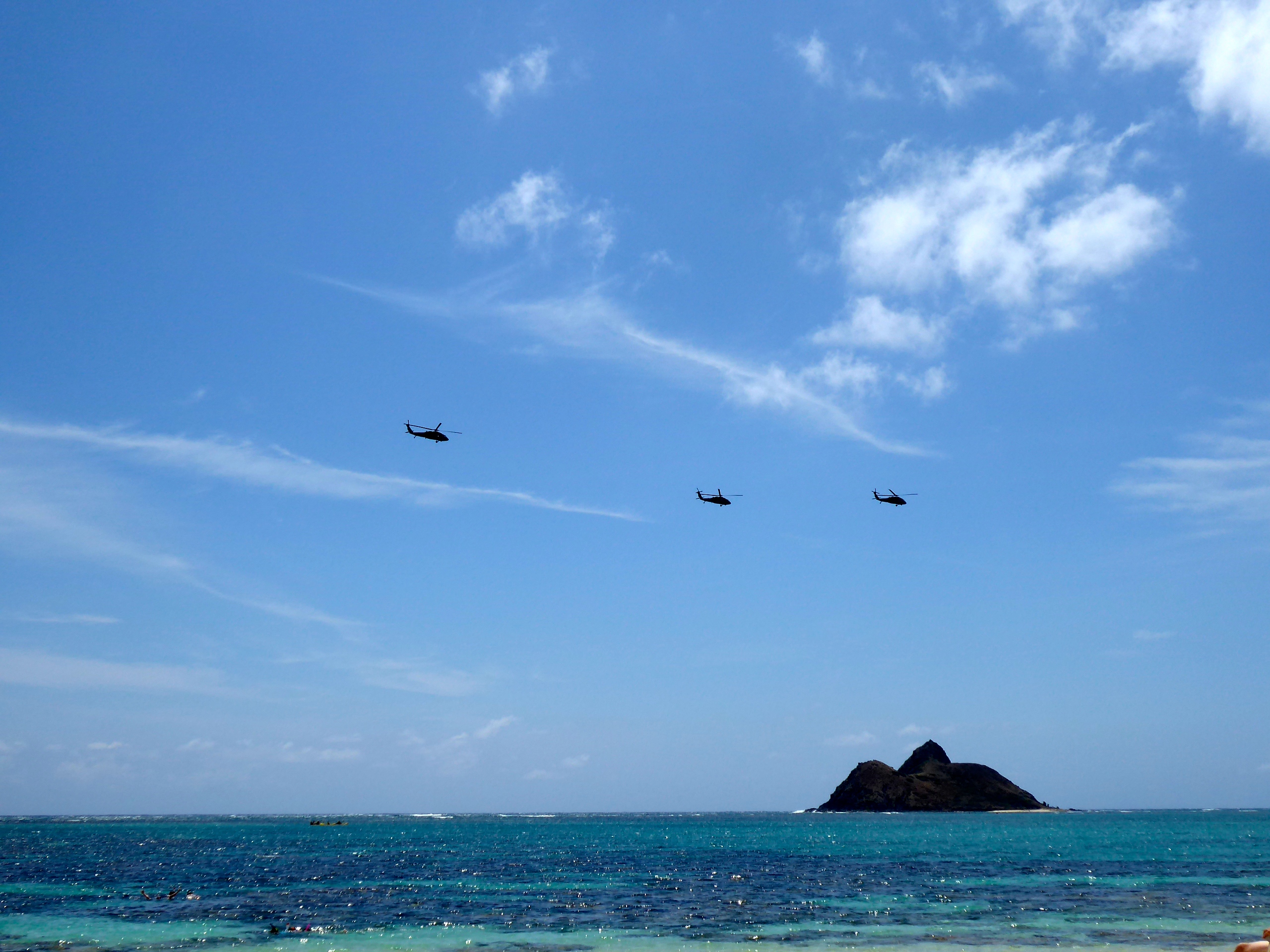 More exciting, a frigatebird flew over. They breed on Oahu, but you don’t see them aloft very often. Photo by Nilou: 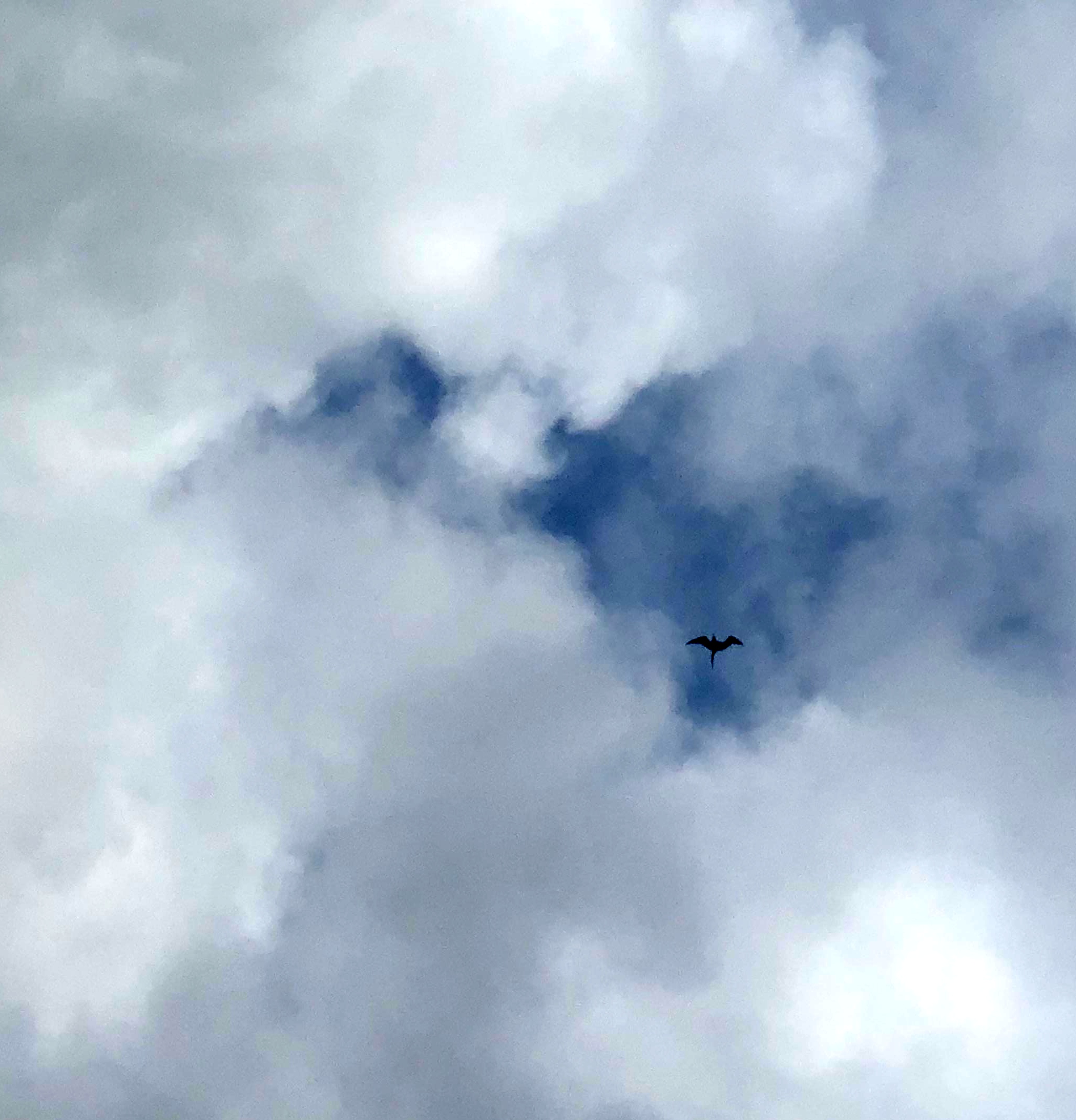 There isn’t much coral at Lanikai Beach, and so I saw only a few fish. But the water was 80°F (27°C) and it was a pleasure just to look around in the warm azure sea.

Well, fresh is good since it wasn’t frozen, but what do they mean by “natural chicken”? Is that in contrast to artificial chicken, like tofurkey? And there isn’t any such official grade as “premium chicken”, at least as classified by the USDA. (In contrast, beef can be graded as “premium,” “choice”, and the like.) As the USDA notes of chicken:

Grade A is the highest quality and the only grade that is likely to be seen at the retail level.

So all the chicken you buy is grade A. Here’s the misleading sign. The “meals made to order” is also a bit misleading, as the chickens are constantly turning on a rotisserie, and they simply pull one off when you order. (The hyphens are also ungrammatical.) 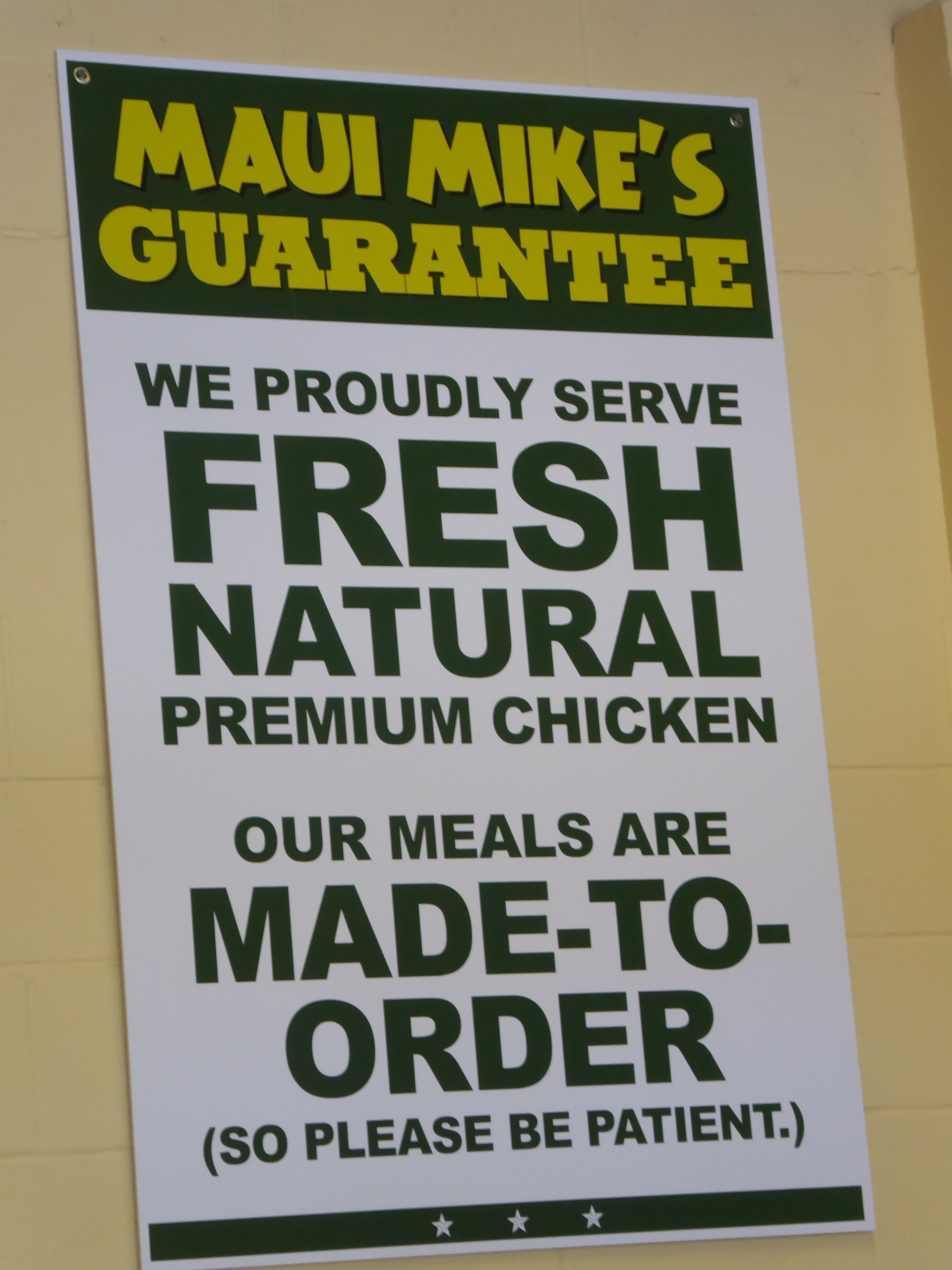 But the chicken was very good, served with Cajun fries and your choice of sauces. Here’s a half-chicken order and a chicken sandwich with bacon and cheese (minus the cheese): 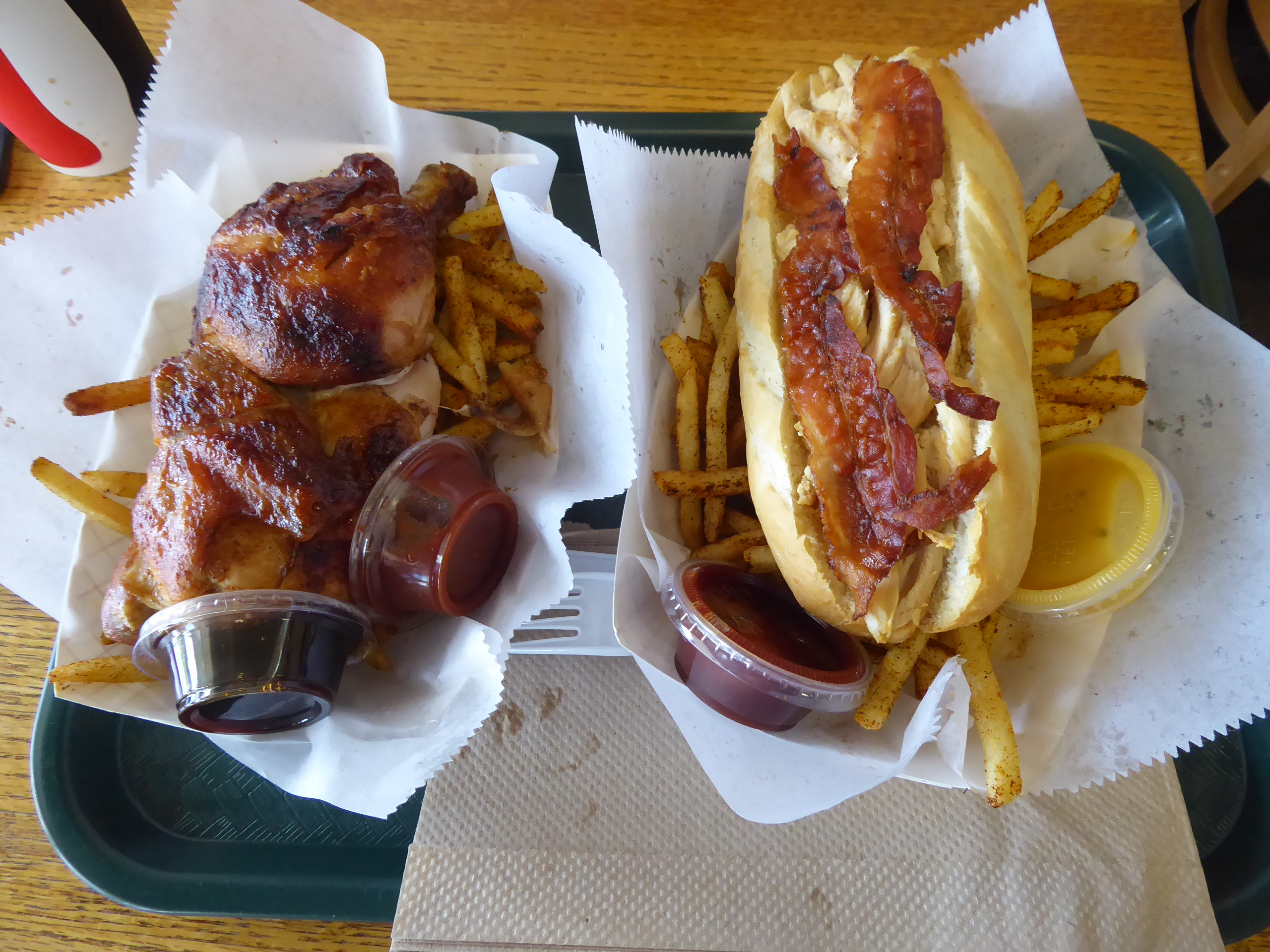 Yesterday I went snorkeling—for the third time on my two trips here—at a wonderful and convenient place: Haunauma Bay, made famous by Elvis’s bare-chested singing appearance in the 1961 movie “Blue Hawaii”. It was formed by a volcanic vent that eroded into a bay no more than 30,000 years ago.

Hanauma Bay is full of reefs harboring dozens of tropical fish species (seen below at low tide), and is easy of access—only a five-minute drive from where I’m staying. It does “suffer from overuse”, as Wikipedia puts it, because the snorkeling is easy and it’s close to Honolulu, drawing dozens of people. The reefs are somewhat degraded from people standing on them, and they close the bay one day a week to allow it to “recover.”

But really, it would take a century to recover, and so we must enjoy it as nondestructively as possible while it’s there. I do take care to not stand on or touch the coral, and of course I don’t potchke with the fish.

The view of the bay from the cliff above, photographed by Nilou: 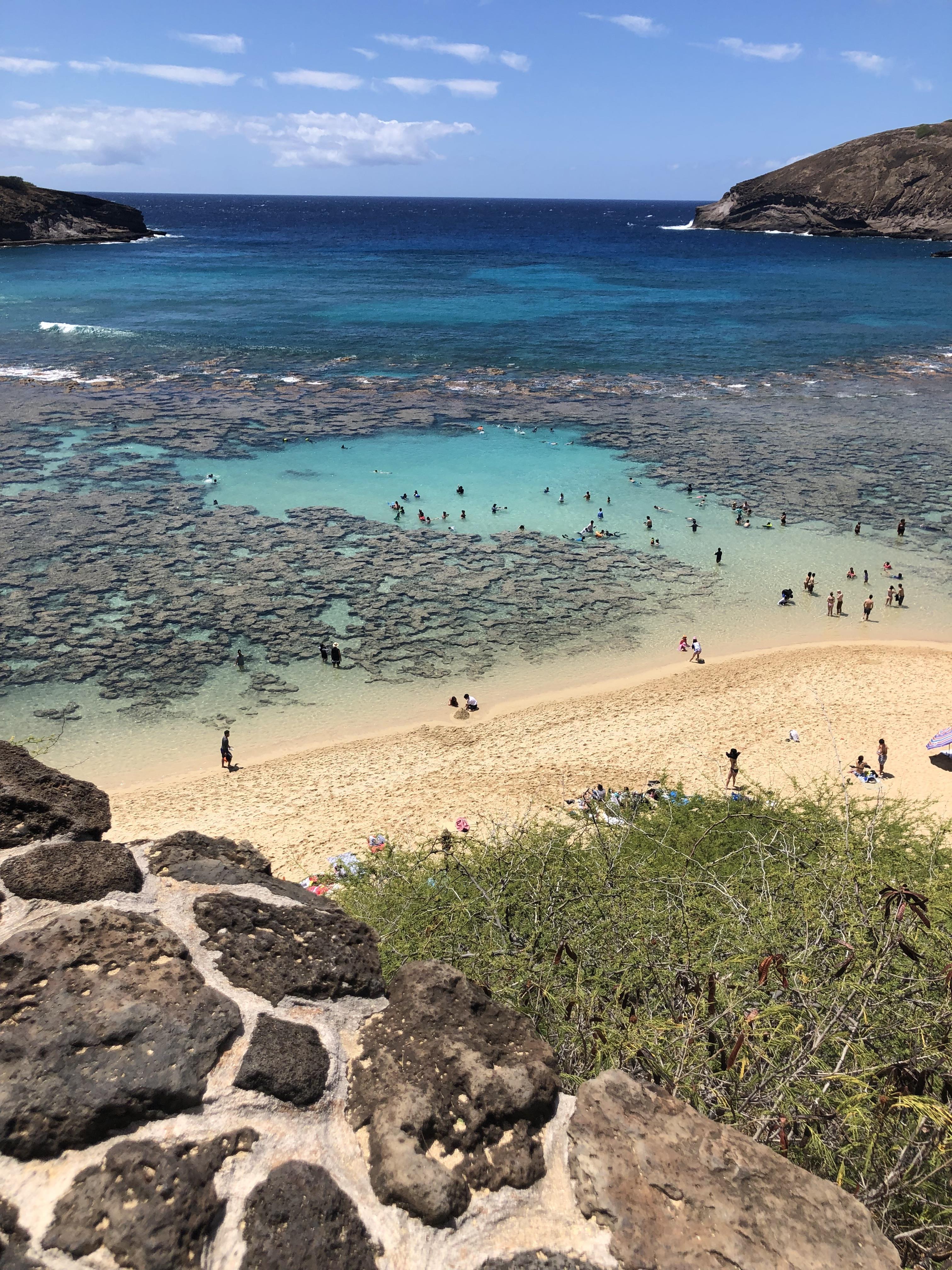 Yours truly after two wonderful snorkeling swims to the outer reef. I’m happy because I saw dozens of fish species: 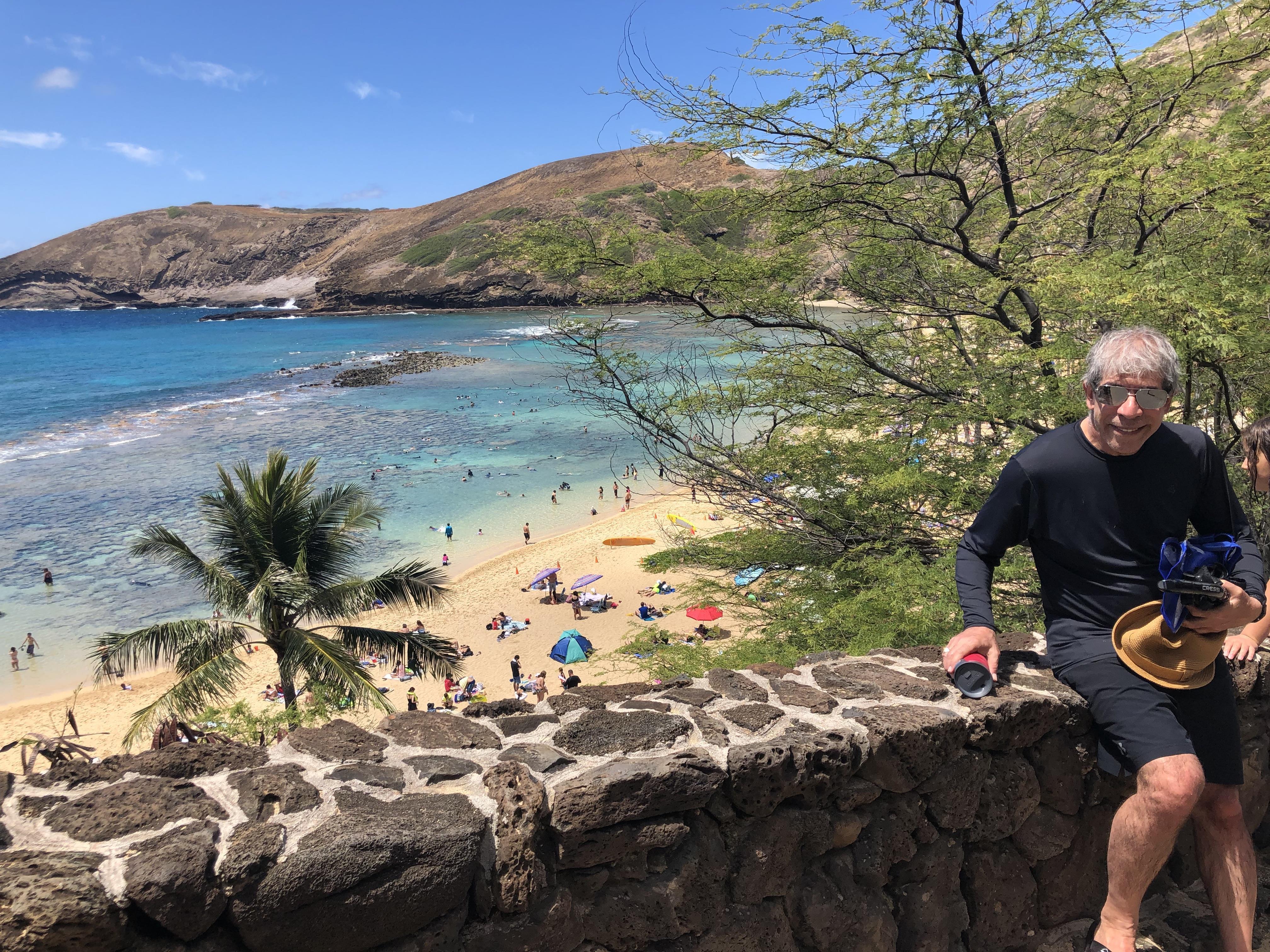 My favorite fish here, as it was before, is the Christmas Wrasse, Thalassoma trilobatum. This photo is from ThoughtCo  I’ve thought about getting an underwater camera to photograph these fish, but decided that there are plenty of good photos on the Internet, and I’d rather swim around and just look at them. 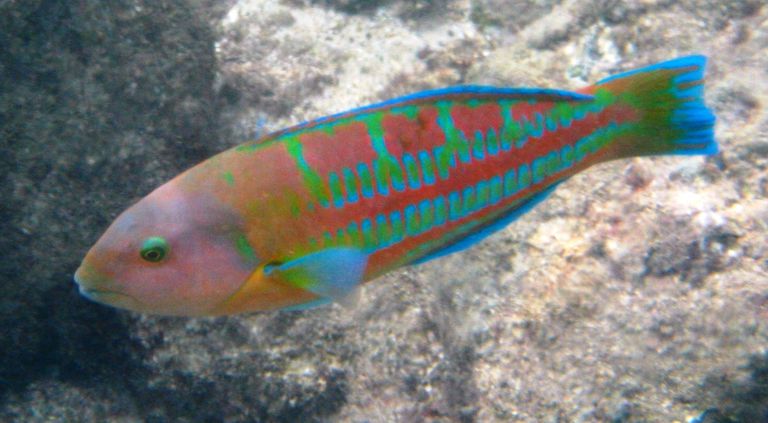 Snorkeling for a long time works up a big appetite, and so we went to Fatboys for a big plate lunch: kalbi shortribs with teriyaki sauce, with two scoops of rice and one scoop of “salad” (macaroni salad, of course). It was excellent: just the ticket as a restorative: 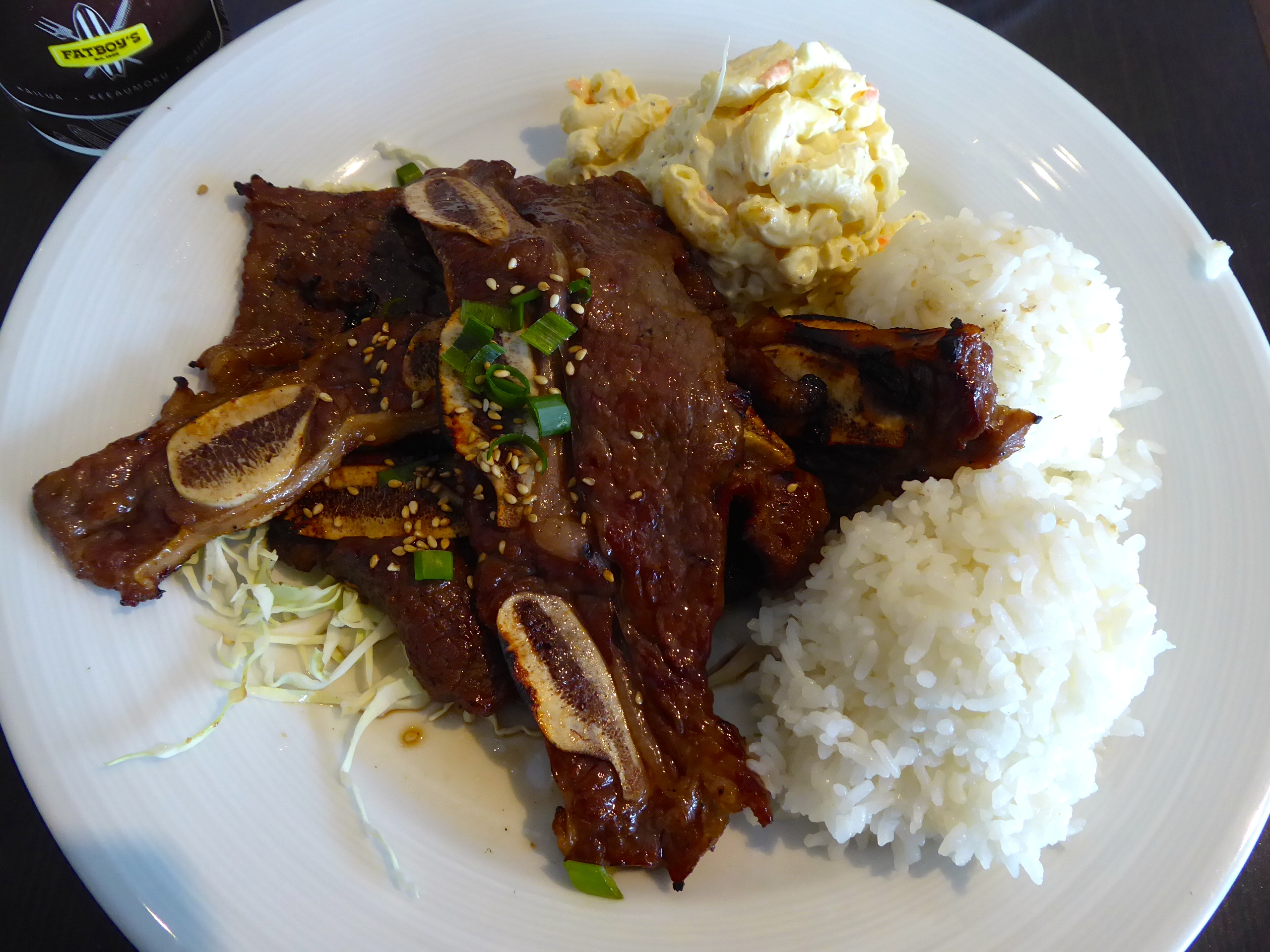 Finally, some local duck friends. Here are Gareth (a beat-up looking mallard drake), and Katy, apparently a feral Pomeranian duck (a breed of mallard). They are always together, and I see them as the duck version of Romeo and Juliet.

Katy is beat up, too, with a dent in the rear of her head where a number of feathers are missing. (I suspect it’s from other drakes trying to rape her.)

They are an unlikely couple but seem to care a great deal for each other. Can ducks be in love? If they can be, these two are.

Katy has had two broods of little black ducklings, but, to my sorrow, none of them survived. We feed them daily. 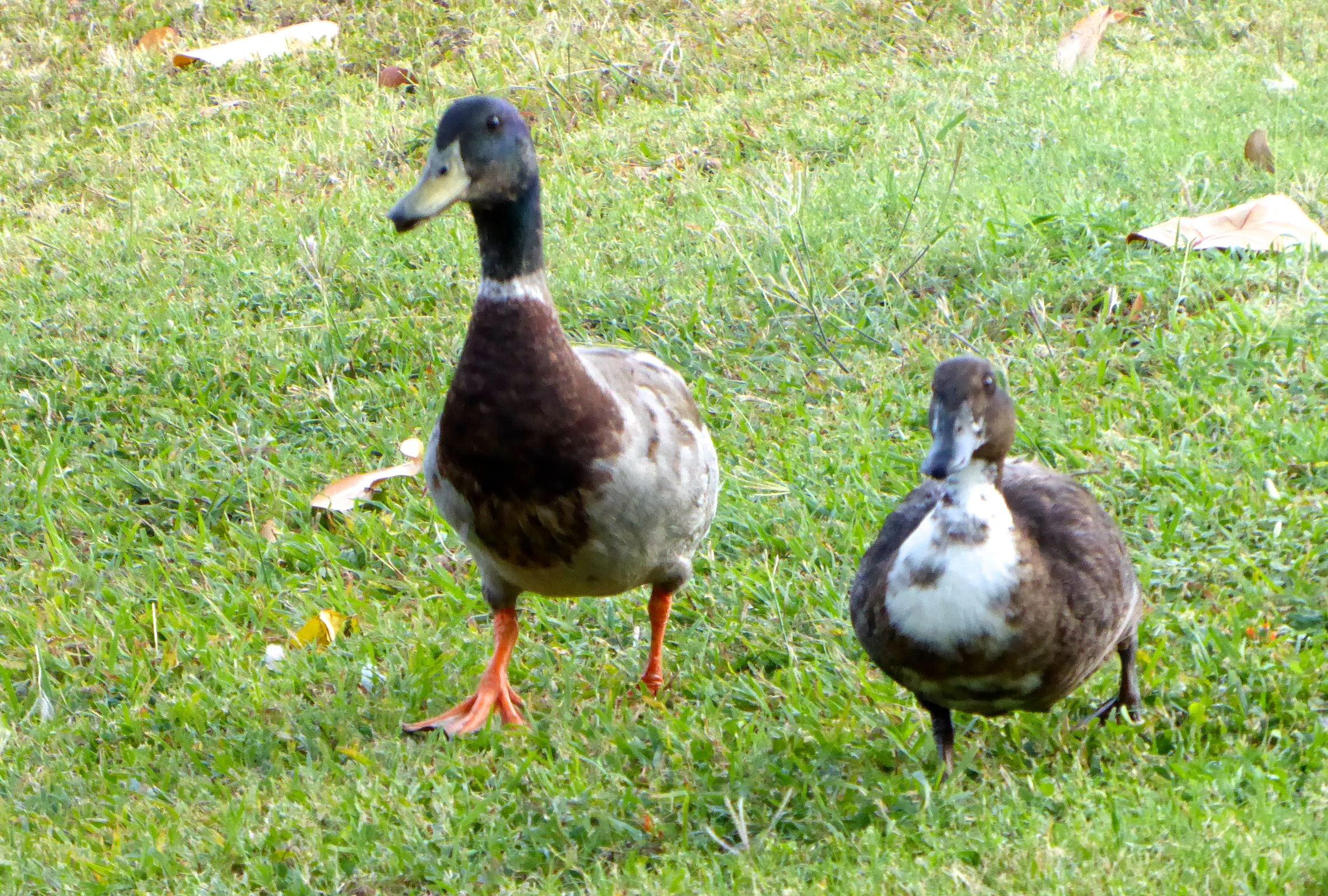 And I can’t resist another photo of my local BFF, the rescue Persian Pi: 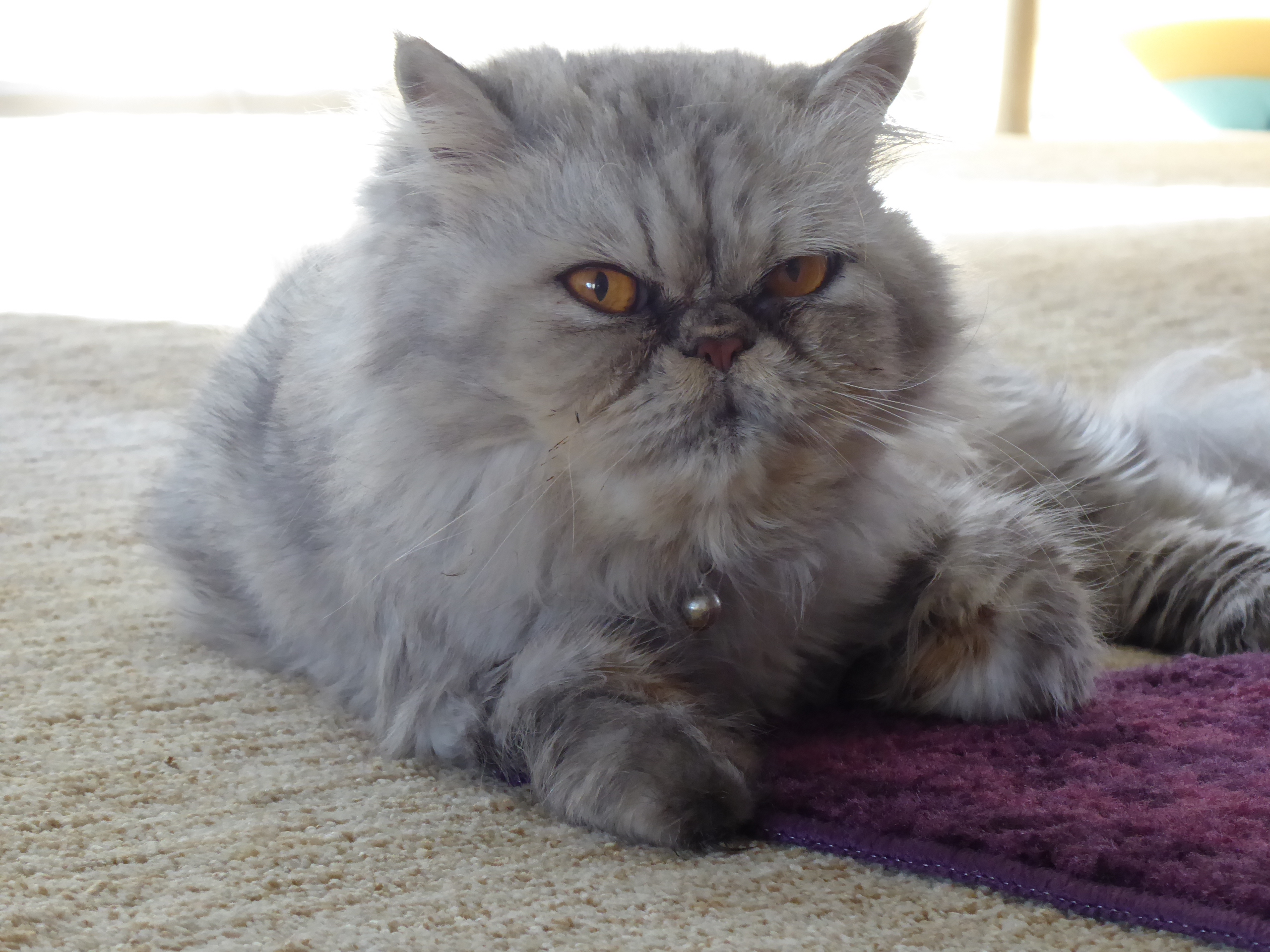