There’s a well known disparity in numbers between men and women in STEM fields, a disparity that universities and graduate schools try to rectify with recruitment efforts, forms of sex-specific affirmative action, and so on.

The assumption behind most of these these actions is often that the disparity is due entirely to sexism and discrimination against women in grad-school programs or in the workplace. And indeed, such discrimination has been documented not only anecdotally, but in psychology studies showing that c.v.s with women’s names on them are regarded less favorably than those bearing men’s names. (But we must not forget that discrimination in these studies can’t automatically be equated to discrimination in hiring, as many schools, including mine, try to overcome such bias by deliberately looking for women candidates.) Also, there are some studies (see this one from Proc. Nat. Acad. Sci. that a reader highlighted at this link, showing that there are STEM biases in favor of women.

However, the main issue is the implicit and seemingly unquestionable claim that all sex-based disparity in STEM is due to bias and sexism. That needn’t be true, for there may be sex-based preferences that feed into the imbalance as well. That is, women may be less inclined, all else equal, to want to go into STEM fields. Indeed, as I show below, there’s some evidence that this is the case for STEM, and this probably also explains the sex imbalance seen in various subfields of medicine despite no differential in salary.

But even that possibility is almost unmentionable given the pervasive assumption that men and women are absolutely equal in preferring what kind of work to do. Even mentioning differential preference is, as you’ll recall, what got James Damore fired from Google.

And if sex-based difference in preference be true, then, even given equal opportunity in the workplace, there may remain a dearth of women. We then have to ask ourselves, “Why are we trying to achieve complete gender balance in STEM? Shouldn’t we just provide equal opportunity rather than try for equality in outcome?”

This appears to be the reason behind a new initiative at a Dutch university to get more equity in STEM hiring at the faculty level, as reported two days ago in Science (click on screenshot below). 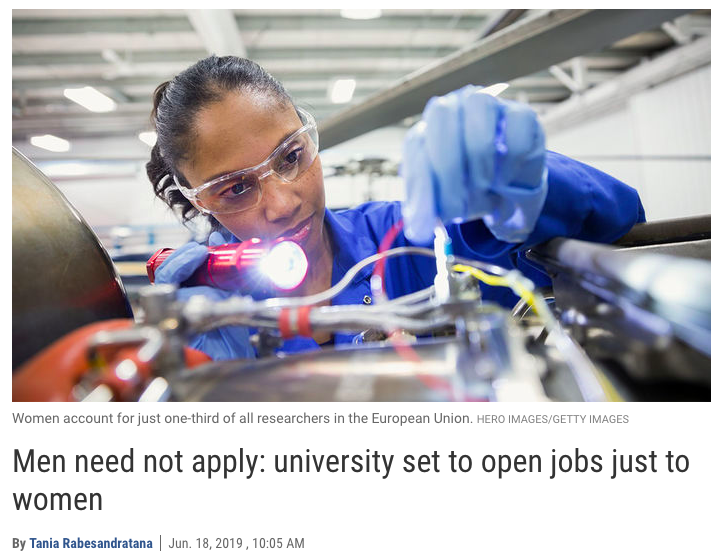 Despite years of what they call “soft measures” to rectify sex bias in jobs at Eindhoven University, they’re now taking “hard measures”: limiting job applicants to women only. As Science reports:

A Dutch engineering university is taking radical action to increase its share of female academics by opening job vacancies to women only.

Starting on 1 July, the Eindhoven University of Technology (TUE) in the Netherlands will not allow men to apply for permanent academic jobs for the first 6 months of the recruitment process under a new fellowship program. If no suitable applicant has been found within that time, men can then apply, but the selection committee will still have to nominate at least one candidate of each gender.

“We have been talking about [gender balance] for ages,” says TUE President Robert-Jan Smits. “All kinds of soft measures are taken and lip service is paid to it. But the stats still look awful.” Currently, 29% of TUE’s assistant professors are women; at the associate and full professor level, about 15% are women. With this program, TUE wants to reach 50% of women for assistant and associate professors, and 35% for full professors.

. . .Dutch and EU laws allow policies to recruit underrepresented groups, TUE says. But across science, a gender gap persists: In 2011, women accounted for just one-third of all EU researchers, and, at the highest level of the academic career ladder, just 21% were women in 2013, according to the European Commission’s She Figures 2015 report.

Biologist Isabelle Vernos, a group leader at the Centre for Genomic Regulation (CRG) in Barcelona, Spain, prefers that jobs be open to everyone whenever possible. “But depending on the discipline, I understand that sometimes you need high-impact action to change a pattern,” adds Vernos, who is a member of CRG’s gender balance committee and chairs the European Research Council’s working group on the same topic.

But as I reported early last year, a correlational study involving indices of gender equality among various nations with the percentage of women among STEM graduates shows a negative correlation. The more gender equality a country has (these are apparently objective and a priori measures of opportunity), the fewer women go into STEM. As I wrote (I include links),

A new paper in Psychological Science (free Unpaywall access; pdf here, reference at bottom) by Gijsbert Stoet and David C. Geary points to the second explanation: consistent differences in preference, and dispels the third, finding no consistent sex differences in abilities. This doesn’t rule out sexism, as they didn’t test for that, but the important factor seems to be preference. That’s because the authors find a strong and counterintuitive correlation between the gender gap in stem degrees and the index of gender equality in countries. In those countries with more gender equality, the gap between men and women in getting STEM degrees is larger. The authors explain that as resulting from a combination of sex-based preferences and the standard of living in different countries.

Before I give the data bearing on equality, there were also two important results of the study:

That means that, overall, that women are academically better than men, but within sexes women tend to excel more in reading abilities than in STEM, while the reverse is true in men. This may reflect a difference in preference about what you like to study.

Here are two salient results, again taken from my summary of the paper. The first refers to the second point above: 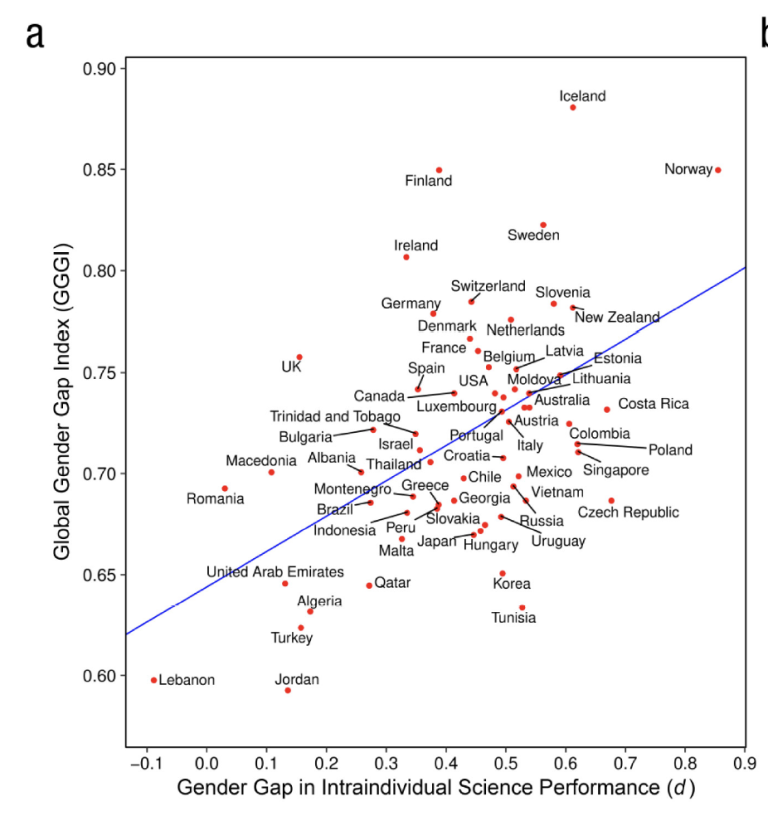 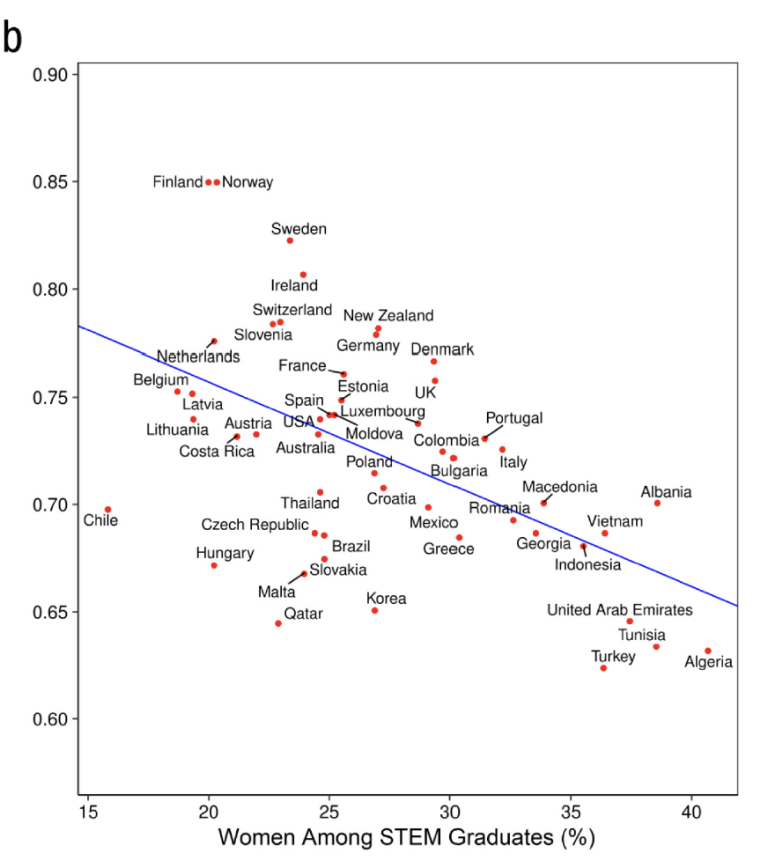 The desperation move of opening up jobs for which men aren’t allowed to apply may reflect a failure to get equality of outcome despite years of trying to achieve it. Thus one can achieve such an outcome only by eliminating men from the job pool, a tactic that would be seen in the U.S. as not only unfair, but illegal.

It’s time, I think, to stop assuming that 100% of the gap between men and women in STEM is due to bias, and 0% to differences in preference. There is no justification for such an assumption, and some evidence against it. Nevertheless, to even mention differential preference is verboten, and can lead to one’s demonization for violating the ideological view that there is no behavioral difference between men and women—a view that rejects scientific findings if they conflict with a blank-slate view of the world.

This is why I emphasize societal concentration on equal opportunity rather than solely on equal outcomes. I hasten to add that we urgently need to figure out why there is disproportionate representation of the sexes in different jobs, and if some of that is due to bias, we need to eliminate that bias.  And we also need to ensure that equality not only for men versus women, but also for members of different ethnic groups, especially historically oppressed minorities. If part of the inequality of outcome reflects differential educational quality and opportunity, like teachers guiding women away from STEM or minorities having poorer schools, those need to be fixed, for these issues violate equality of opportunity as well.

That said, I am still in favor, for the time being, of a form of affirmative action in hiring for sexes and minorities, for that is a way to at least provide role models for members of different groups until we solve the problem of ensuring equal opportunity. But I continue to bridle at the untested and probably invalid assumptions that men and women are absolutely equal in their job preferences, and that the dearth of women in STEM solely reflects sexism.