The strategy of American courts in their desire to continue allowing religious incursion into the government—be it “In God We Trust” on our money or religious symbols on public land—has been to pretend that religious symbols and mottos morph into nonreligious, historical and secular icons over time. This is patently bogus, an offense to anybody with two neurons to rub together.

And so, in an important decision about the First Amendment, the U.S. Supreme court ruled today that a giant cross on public land in Maryland, commemorating war dead, was constitutional. And the vote of the Roberts court, though opinions were fractured, was 7-2 (only Ginsburg and Sotomayor dissented; where was Kagan?). Read the Washington Post‘s take by clicking on the screenshot below. The full range of opinions can be found in a pdf here. 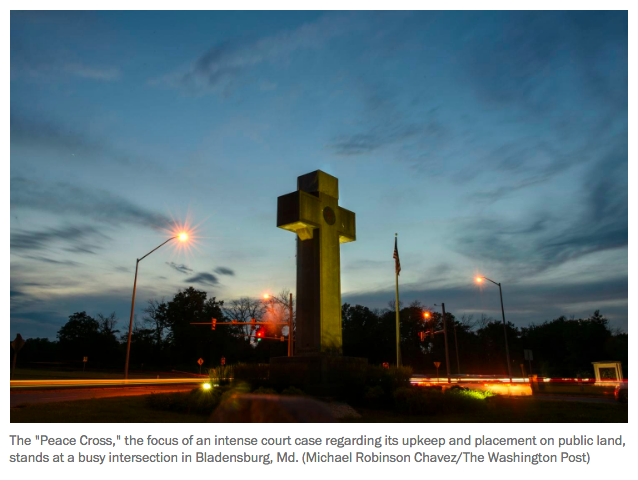 As usual, the pretense is that the cross is no longer a wholly religious symbol. Here are the words of Justice Alito, who wrote for the majority:

The cross is undoubtedly a Christian symbol, but that fact should not blind us to everything else that the Bladensburg Cross has come to represent . . .  For some, that monument is a symbolic resting place for ancestors who never returned home. For others, it is a place for the community to gather and honor all veterans and their sacrifices for our Nation. For others still, it is a historical landmark.

For many of these people, destroying or defacing the Cross that has stood undisturbed for nearly a century would not be neutral and would not further the ideals of respect and tolerance embodied in the First Amendment.

In other words, religious symbols are okay on public land because they have assumed other meanings as well. And we must have “respect and tolerance” for believers. But why a cross rather than a religion-neutral monument? Would the court be so tolerant of a Jewish Star of David, or a statue of Ganesha? f course not, because they see America as a “Christian nation”.

The Freedom from Religion Foundation calls the decision a “shameful legacy for the Roberts Court”, and it is, for they are dismantling one of the most important amendments to the Constitution.  And the FFRF adds this:

Ominously, instead of focusing on legal principles, Alito looks to “history for guidance,” trotting out typical Religious Right examples — such as legislative prayer, the day of thanksgiving Washington declared (which the court erroneously called a “National Day of Prayer”), some religious language in the Northwest Ordinance, and George Washington’s Farewell Address’ “religion and morality.” The central test for determining these violations, known as the Lemon test, was set aside in favor of the argument from history, though not explicitly overturned by a majority of the justices.

“The passage of time gives rise to a strong presumption of constitutionality,” writes Alito.

In an elegant and thoughtful dissent joined by Justice Sonia Sotomayor, Justice Ruth Bader Ginsburg gets it right.

“Using the cross as a war memorial does not transform it into a secular symbol, as the Courts of Appeals have uniformly recognized,” the dissent states. “By maintaining the Peace Cross on a public highway, the [Maryland-National Capital Park and Planning] Commission elevates Christianity over other faiths, and religion over nonreligion.”

Ginsburg persuasively lays out how such public crosses alienate a large and fast-growing segment of the U.S. population.

“To non-Christians, nearly 30 percent of the population of the United States (Pew Research Center, America’s Changing Religious Landscape 4 (2015)), the state’s choice to display the cross on public buildings or spaces conveys a message of exclusion: It tells them they ‘are outsiders, not full members of the political community,’” she writes.

Yes, Ginsburg and Sotomayor got it right. It’s still a cross, and still a religious symbol, and the rest of the court, in their desire to tear down the wall between church and state, is pretending that the cross on which Jesus supposedly died isn’t really religious—in a religious way, that is.

As Andrew Seidel (an FFRF lawyer) told the audience in our Chicago discussion nine days ago, we can expect this behavior to continue for a long time, as the conservatives on the Roberts court (save Thomas) are pretty young. But he also thinks that the inevitable secularization of America will, in the future, pull the pendulum back.

I hope so, but I don’t share his confidence. Americans, with their sense of fair play, may see decisions like this as a meaningless sop to the faithful (note Alito’s call for “respect and tolerance” for Christians). But they’re not meaningless, and that’s why the founders created the First Amendment.

87 thoughts on “Another defeat for the First Amendment: Supreme Court rules that the “Bladensburg cross” is not a religious symbol”