So much for Republicans and conservatives valuing the sanctity of life! They’d would prefer to have fetal tissue—derived from abortions—destroyed than to be used for medical research that could save lives. Use of tissue: possible saving of lives. Destruction of tissue: no saving of lives. Trump administration decision: Destroy the tissue. Such is the cockeyed logic of religiously-influenced zealots.

According to several sources, including the New York Times and Science articles below (click on screenshots), the Trump administration announced two days ago that they were going to sharply cut back on federal spending on medical research using fetal tissue, i.e. tissue from aborted fetuses that would otherwise be discarded. 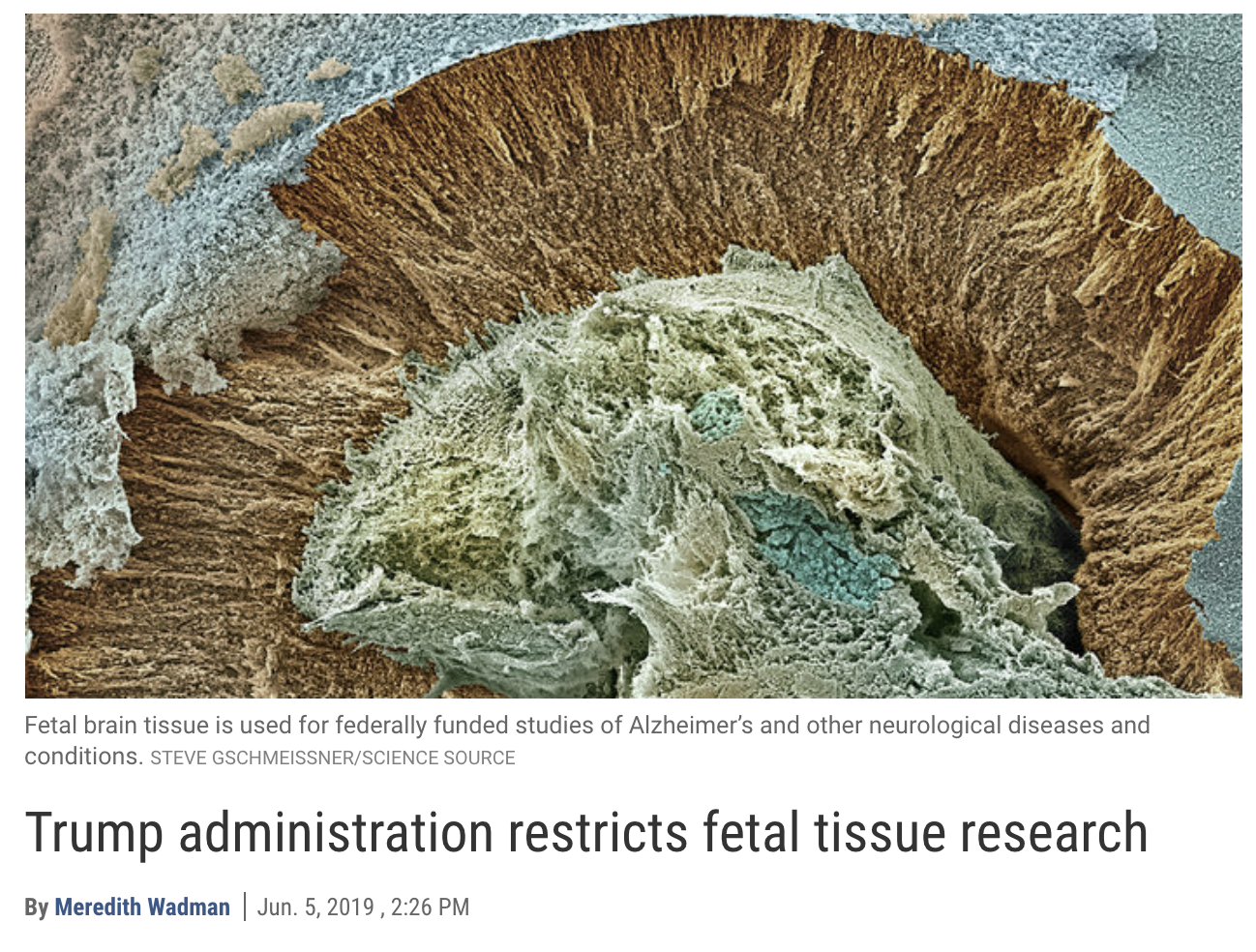 The new plan, adopted after a nine-month federal review, includes the following:

Why use fetal tissue? The tissues used in research come from elective or spontaneous abortion, and are used to establish cell lines to work on diseases like Alzheimer’s, cancer, Parkinson’s disease, and HIV.  Much of this work aims at transplanting fetal tissue into adults or children (see below). Fetal tissue cell lines were, in fact, critical to developing polio vaccine in 1982. This paper from a book put out by the National Academies Press explains why fetal tissue is used for such work:

Cell lines are established by culturing fetal cells in such a way that they continue growing and multiplying in laboratory dishes. Such cells can be used to test a drug’s ability to damage genetic material or to test the effects of specific viral (or other types) of infection. Because the cells multiply, a small number of cells harvested from a dead fetus can be greatly expanded and used either as a source of more cell lines or for transplants.

Fetal tissue has been used for transplantation for two reasons. First, certain fetal tissues lack cell-surface markers found in mature tissue that induce immune system reactions in transplant recipients and lead to tissue rejection and transplant failure. Thus, fetal tissue eludes these body defenses. In addition, groups of different kinds of fetal cells can be separated from one another in the laboratory to remove those cells that may trigger a recipient’s immune system. Second, certain areas of the body do not regenerate after birth or after a few years of life, so the use of mature tissue for transplantation is not possible. Adult brain cells, for example, regenerate slowly if at all, but when fetal brain cells are transplanted they will grow readily.

According to medical researchers, there is no substitute at present for using fetal tissue, though the NIH, in view of this decision, is starting to look for substitutes. But remember, the tissue, if not used for medical research, would simply be destroyed through incineration.

You already know the reason the Trump administration made this decision: it’s a sop to its pro-life constituency that somehow regards using fetal tissue as destroying the dignity of what they see as a human being. The argument that this crucial research would somehow promote abortions won’t wash, for no woman would have an abortion simply to provide material for medical research. Can you imagine a woman saying, “I’m not going to have this baby, for I think its tissues may help cure cancer”?

To get an idea of the nature of the objections, which surely must be derived primarily from religion, here are a few statements from the articles.  From the NYT:

Anti-abortion groups were quick to applaud the decision and played down any effect on medical research.

“Most Americans do not want their tax dollars creating a marketplace for aborted baby body parts, which are then implanted into mice and used for experimentation,” said Jeanne Mancini, the president of March for Life. “This type of research involves the gross violation of basic human rights and certainly the government has no business funding it.”

Representative Steve Scalise of Louisiana, the No. 2 House Republican, declared, “The government has no business subsidizing researchers that traffic the body parts of aborted babies.”

. . . “There are ample ethically derived sources and alternatives,” said David Prentice, vice president and research director for the Charlotte Lozier Institute, the research arm of the Susan B. Anthony List, an anti-abortion group. He called the move by the Health and Human Services Department “a good step, but a preliminary step,” adding that he hoped the administration would end federal funding to all universities for research involving fetal tissue from abortions.

From the Science article:

Groups that oppose fetal tissue research and had encouraged the Trump administration to undertake the review are applauding the moves. “This is a major pro-life victory and we thank President Trump for taking decisive action. It is outrageous and disgusting that we have been complicit, through our taxpayer dollars, in the experimentation using baby body parts,” said Marjorie Dannenfelser, president of the Susan B. Anthony List, a Washington, D.C., lobbying group that opposes abortion.

David Prentice, vice president and research director of the Charlotte Lozier Institute in Arlington, Virginia, the research arm of the Susan B. Anthony list, added: “Our government will now invest in effective research methods that do not rely on the destruction of human life.”

Let us be clear again: these research projects do not cause the destruction of human life, even if you see an abortion as “the destruction of human life”. Nor does it violate “basic human rights”: the Supreme Court has ruled that these abortions are legal, and I suspect that any women who doesn’t want her aborted fetus used for research has the right to do that.  There are two alternatives for an aborted fetus: destroy it through incineration or use it for research that may help save lives. Given these choices, only one makes sense.