Several readers sent me this hit piece on Pinker in Current Affairs, written by Nathan J. Robinson, a Ph.D. student at Harvard in sociology and social policy. He also happens to be the editor in chief of the magazine, which explains how this profanity-laced piece got published.

Click on the screenshot below to read it.  One person also sent it to me because I am quoted in it, though the quote is used in a misleading way (more below). I suggest you read it yourself, and compare Robinson’s characterization of Pinker with what you know of Steve’s last two books, The Better Angels of Our Nature and Enlightenment Now. For if you haven’t read either or both of those books, you won’t be able to judge Robinson’s jeremiad.

The title alone tells you where the piece is going. Regardless of what you think of Pinker, he’s surely not even close to being “the world’s most annoying man”. Has Robinson considered, say, Donald Trump? Or Bill Nye? Or Dr. Oz?

Robinson turns out to be annoyed largely because he doesn’t like Pinker getting all rich and famous peddling ideas that Robinson thinks are misguided. The “rich and famous” stuff rankles him deeply. As for the “misguided” bit: Pinker has been accused of the same stuff before, and has answered many of Robinson’s objections (see here and here for a start). 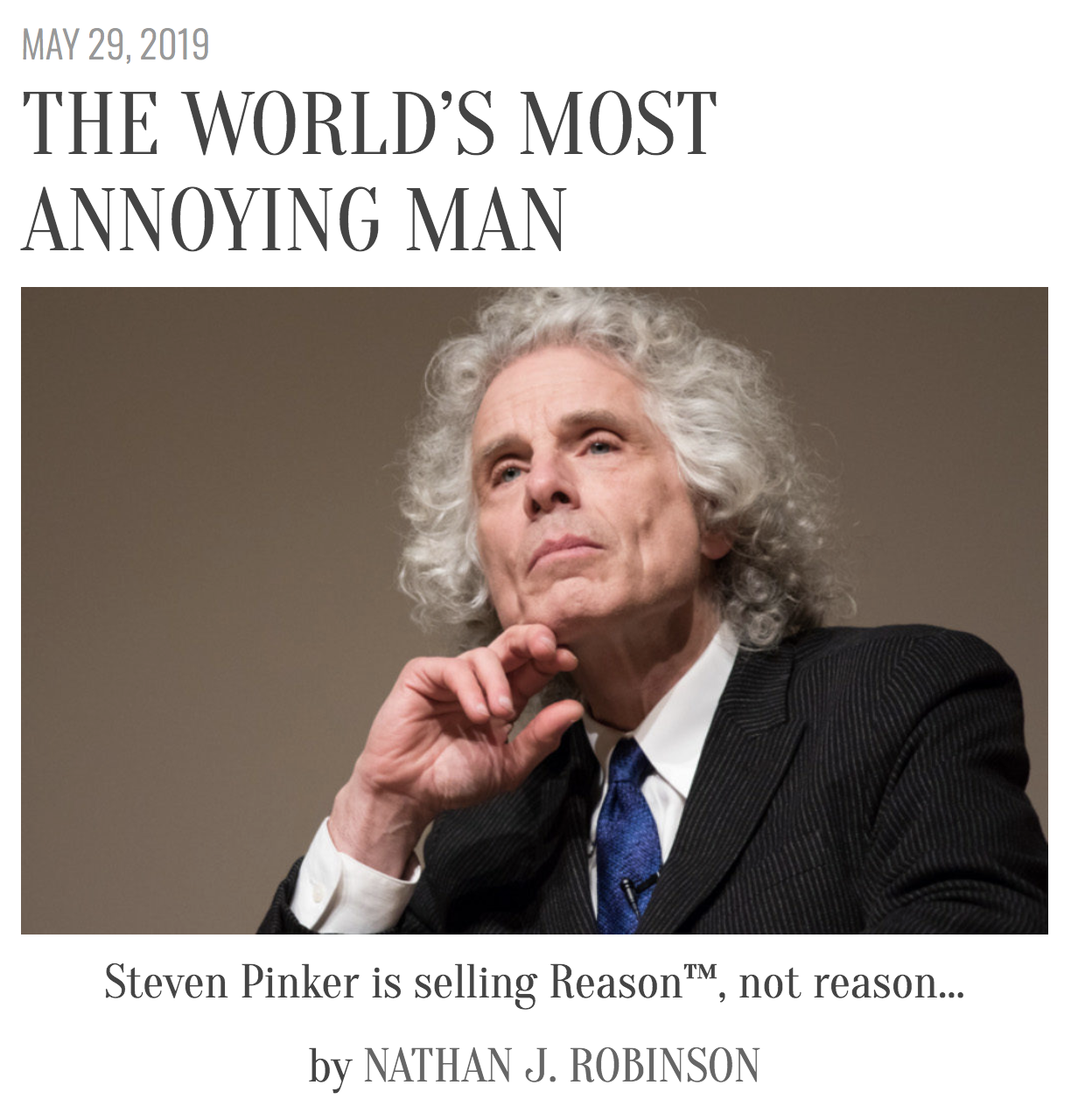 I’m not going to dissect the article in detail, as it is similar to many other hit pieces on Pinker—except far more vitriolic. I urge readers to give their own judgement in the comments below, but want to make a few points.

1.) Robinson says he agrees with 80% of what Pinker says in those books, but then concentrates on the 20% he doesn’t like, distorting Pinker’s views in the process. For example, he calls some of Pinker’s statements “irrational swipes”, including these. You may not agree with them, but they’re not irrational, and the second and third ones happens to be true (note: Pinker mentions only “some” feminist theories as well as “many on the left”—not all feminists or Leftists in either case):

Robinson also distorts Pinker’s views on nuclear weapons, saying that their existence makes hash of Pinker’s views of the increasing peacefulness of the world. The fact is that the world has grown increasingly peaceful despite nuclear weapons, and Pinker adduces data to that end, and also seriously considers the nuclear threat. But Robinson, whose main objection to Pinker’s documentation of progress seems to be that “some people haven’t experienced positive change”, uses this in a digression to indict America for its use of nuclear weapons in World War II, as well as drones at present and the Vietnam policy of Lyndon Johnson. This is irrelevant to the discussion.  Robinson:

Nuclear weapons pose a strong challenge to Pinker’s thesis of declining violence, one he never dealt with adequately. He argues in his books that the “long peace” since World War II was not the result of nuclear weapons, and argues that nukes are essentially “useless in winning wars and in keeping the peace” since no country would dare to use them:

“Incinerating massive numbers of noncombatants would shred the principles of distinction and proportionality that govern the conduct of war and would constitute the worst war crimes in history. That can make even politicians squeamish, so a taboo grew up around the use of nuclear weapons, effectively turning them into bluffs.”

Of course, this means the United States itself has committed the “worst war crimes in history” since it intentionally dropped nuclear weapons on two civilian populations. And while there is certainly a “taboo” on such behavior—Hiroshima horrified much of the world, though Americans tend to think it was fine—U.S. commanders contemplated using nuclear weapons in Vietnam, too. (Good thing Lyndon Johnson got a bit “squeamish,” although not so squeamish as to stop a war that killed two million Vietnamese people.)

2.) Robinson seems mostly concerned with taking down Pinker’s status because he perceives that Pinker has a high status, but a status that is unwarranted. Robinson repeatedly mentions Pinker’s position as a Harvard professor and how, sequestered among the ivy, he cannot know about the travails of the common person, which of course Robinson, as a Harvard graduate student, knows a lot about.

Get a load of this:

But sometimes [Pinker] accidentally lapses and says things like: “Everything is amazing… None of us are as happy as we ought to be, given how amazing our world has become.”

This is, of course, false, insulting, and enraging. Even assuming Pinker’s thesis is accurate, life is clearly not “amazing” for everyone, like the tens of millions of refugees around the world. “None of us”? The spectacle of a Harvard professor, with millions of dollars in book sales and friends among the jet-setting global elite, telling the Rohingya to perk up, and Black Americans to be more grateful for iPhones, is grotesque. Pinker may reply that by “us” he does not mean everyone, just the statistically average people for whom things have gotten better. But this is precisely the point: Casually switching between “things are better at the median than during 1940 or 1410” and “everything is amazing” is appallingly insensitive to the reality of pain and deprivation. “If we have a shred of cosmic gratitude,” Pinker writes, we “ought to be” happier. “An American in 2019,” he writes “will live nine years longer” and “have an additional eight hours a week of leisure,” which they can spend “reading on the Web, listening to music on a smartphone, streaming movies on high-definition TV, … or dining on Thai food instead of spam fritters.” When people who are not among the Americans who can do these things read a passage like that, is it any wonder that they get a little ticked? The Thai food in Cambridge may be excellent, but my friend who teaches elementary school in Detroit still has students coming to school hungry each day. I am sure they’d happily take a spam fritter, though perhaps they just lack a “shred of cosmic gratitude.”

I do not think Pinker told the Rohingya to perk up, nor does he diminish the problems that remain in this world. Pinker’s tactic is to regard them as things to be solve. Read the damn books!. Robinson’s repeated mentioning of Harvard, his denigrating tone, complete with profanity (see below), and the gratuitous mention of “millions of dollars in book sales,” makes me think there is something more to Robinson’s beef than mere facts.

There are two cartoons in the piece that are so far from reality, and so unfair, that I find them offensive. Here they are: 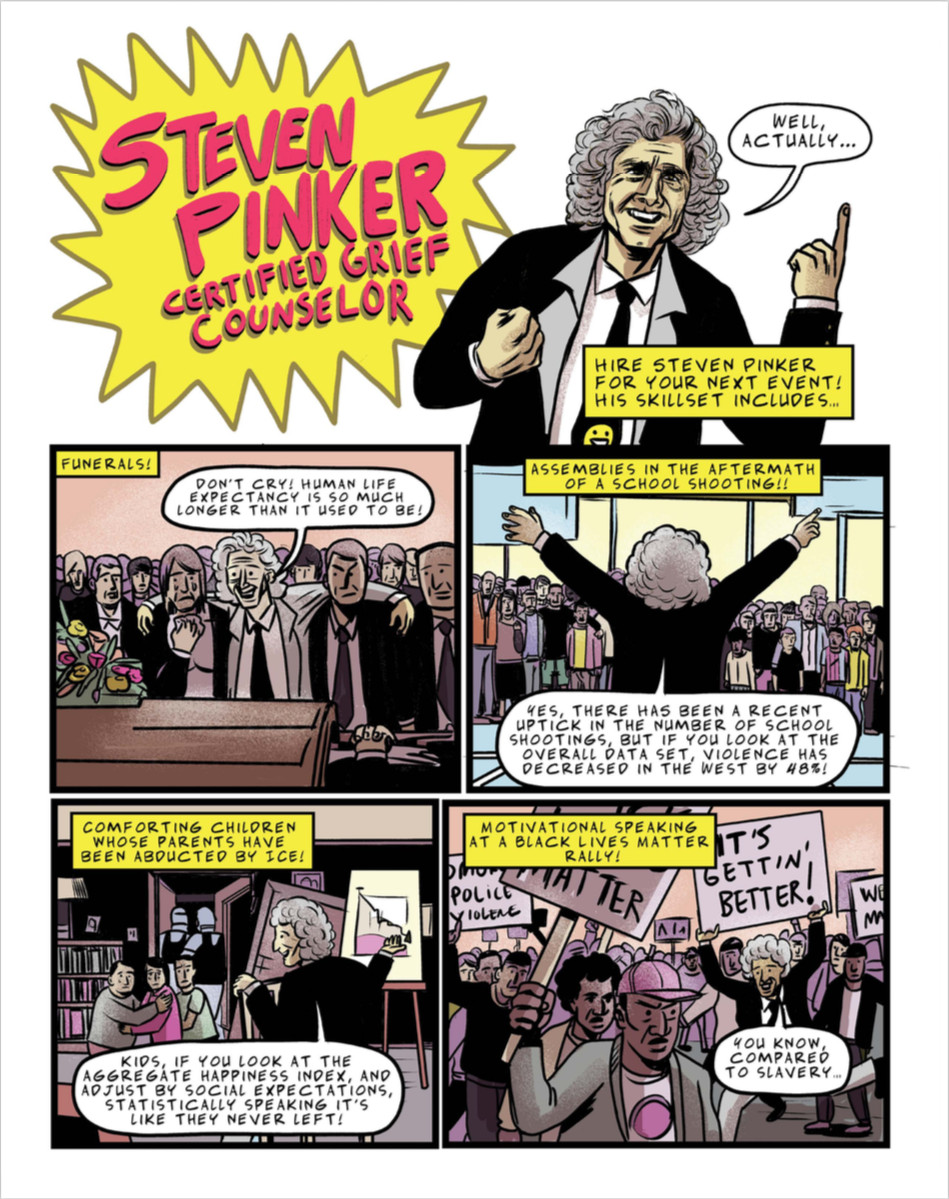 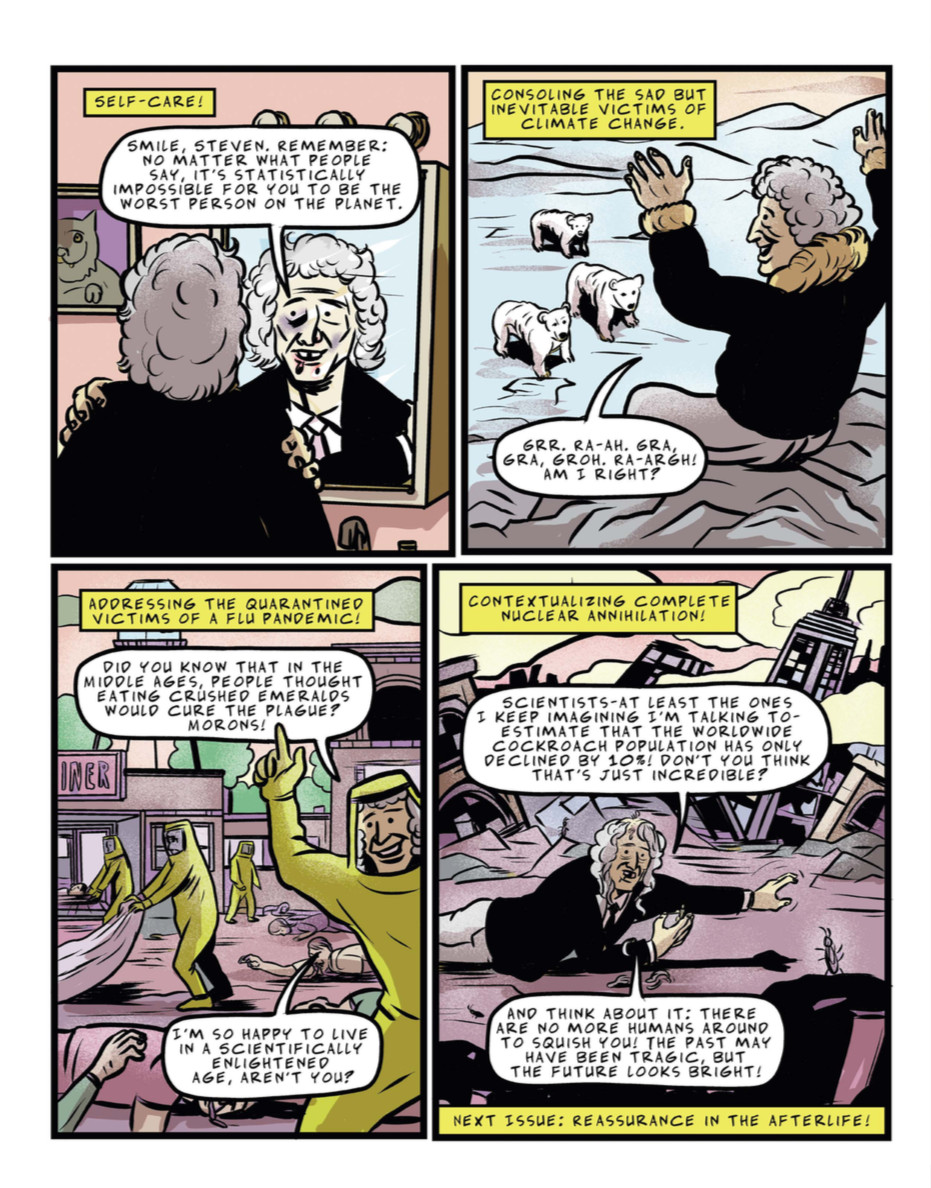 Seriously? This is in Current Affairs?

3.) As I said, I’m mentioned in the piece, though I didn’t catch that when I skimmed it (I didn’t originally intend to defend Pinker against such a stupid piece). Here’s Robinson’s brief mention of me:

The Chronicle suggested that “by proclaiming the gospel of progress,” Pinker “has made a lot of enemies.” (It cited a cartoon printed in Current Affairs as an example of the “hate” Pinker gets.) Pinker’s friend Jerry Coyne thinks people dislike Pinker because he is famous.

Well, yes, I do think that some people dislike Pinker because he is famous, for they’re always mentioning his fame and his books (and often, like P.Z. Myers, their own lack thereof). But if you look at the link to my post, you’ll see that I actually said this:

As best I can understand, people don’t like him because he’s famous and they’re not, because he attacks a “blank slate” view of human nature (a view to which much of the Left is ideologically wedded), and because he has documented continuing material and moral progress in humanity (which “riskologists” don’t like because they make their lives crying that the sky is going to fall).

Note that I gave three reasons, of which Robinson uses just one. This is quote mining and it is intellectual dishonesty. So be it.

4.) Finally, the piece is larded not just with invective, but with profanity, even calling Pinker an “asshole”. This last bit shows you not just the outraged tone, but the not-so-hidden resentment of Pinker’s fame (that may be why Robinson used only the “he is famous” bit from my diagnosis of why people dislike Pinker). Yes, I think Robinson is one of those people afflicted by all three symptoms of my tripartite diagnosis of Pinkerphobia. Here’s Robinson’s splenetic ending. I’ve bolded the most telling parts.

Yeah, okay. This is Science. This is Reason. Give me a break. Look, I’m just peeved because Pinker is treated as a serious and sober-minded public intellectual when he is no better than the rest of us. And I get particularly annoyed at guys who rail against “populism” without showing a bit of empathy for those who have serious grievances, or considering the possibility that the world looks a bit rosier from their personal position than it does once you get out of Harvard Yard. I wouldn’t even mind so much if he didn’t also take gratuitously unpleasant and unfair swipes at the left. We’re not “progressophobes” or fucking morons who don’t recognize that the internet is cool and the Black Death was not.

I find Steven Pinker the most annoying man in the world because he’s certainly one of the most patronizing men in the world, and that contest has a lot of impressive contenders. I even sense that he’d be proud to be called annoying: “Ah, you’re annoyed because you can’t handle the facts due to your cognitive biases. It must be because of envy and narcissism.” He’s even writing a new book trying to explain why people hate him, and of course it’s all going to be because they’re defective reasoners who subscribe to idiotic Blank Slate theories of nature, not because he’s an asshole who doesn’t bother to listen to a word anybody says. I’ve seen this type of guy so many times now. Harris, Peterson, Shapiro. They all want to explain before they’ve empathized, irrationally diagnose others’ irrationality, insist that their ideology isn’t an ideology while ours is. Is there any way to make it stop? Is there anything you could say to them in response that wouldn’t just further convince them that they’re right? Is there hope for an Enlightenment that doesn’t just consist of the word “Enlightenment” repeated ad infinitum?

No better than the rest of us? Well, I, for one, am quite willing to admit that, when it comes to intellectual ability, perspicacity, diligence, and eloquence, Pinker is better than I. And that’s fine with me. I’m glad that people better than I walk the Earth!

After reading this piece, I really do think that Robinson has some psychological issues that have clouded his analysis. But I’m not a psychologist. My friend, Orli Peter, who is a psychologist, told me this: “Outrage is addictive and Pinker takes away the drug, so [Robinson] has to be outraged at Pinker to get his fix.” Be that as it may, Robinson’s petulant and distorted analysis, filled with rage, does not stand as a substantive critique of Pinker’s last two books.