Bruce Lyon is back with some wonderful photos of his peregrine falcons (Falco peregrinus), who have bred in California. His notes are indented. Bruce often drops by to answer questions, so if you have any please post them in the comments.

Over the past five years I have been observing a pair of nesting peregrine falcons (Falco peregrinus) on the California coast north of Santa Cruz (see here, here and here for a couple of previous posts on these birds). Last year I began watching a second pair nesting further north up the coast from my main pair. I have known about these birds for a few years but do not watch them very often because I have to wade through a jungle of poison oak to get to them and they normally nest well out of sight around a corner in the cliff so I typically spend most of my visit seeing nothing. Last year that changed for a short period of time because the birds tried a new nest site right in plain view. Unfortunately, this nest failed and they returned the nesting area hidden from view.

Below: One of the birds perching on a favorite dirt pinnacle perch.  Last year, their first nest, the new location, was just below this perched bird on the backside of the dirt face. The nest site was clearly visible from the top of the cliffs (see next images) from a different viewing angle.  When this nest failed they moved out of sight to their usual hidden nest site. 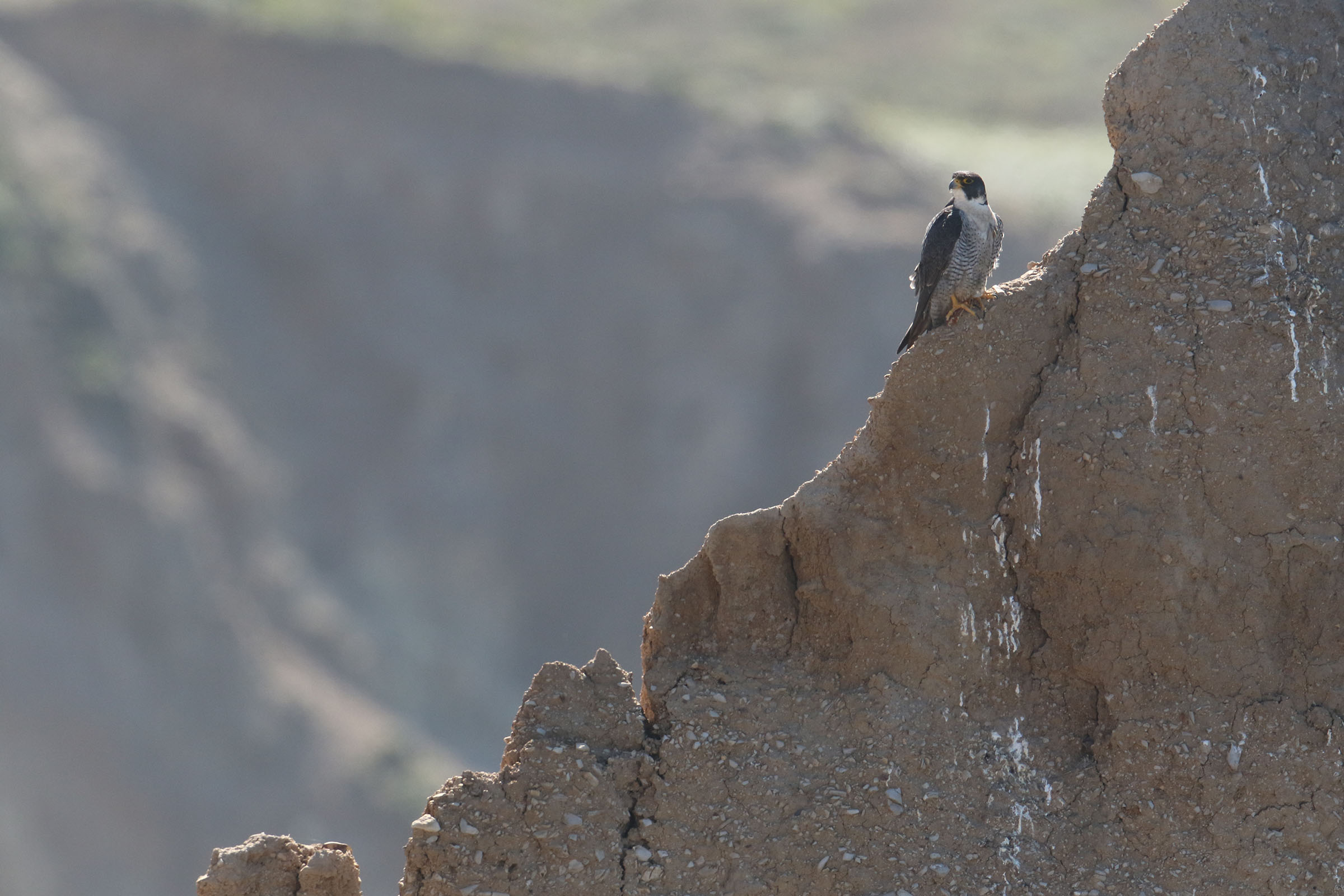 Below: The pair checks out the new nest site. Notice the size difference between the birds—peregrines and other raptors show ‘reverse size dimorphism’, where the female is larger than the male. The size difference is greatest in species like peregrines that prey on birds. I think something like seventeen hypotheses have been proposed to account for this size pattern in raptors but I am not convinced that we have a clear understanding yet. Perhaps this is because so many factors come into play in terms of natural and sexual selection on body size of males and females. 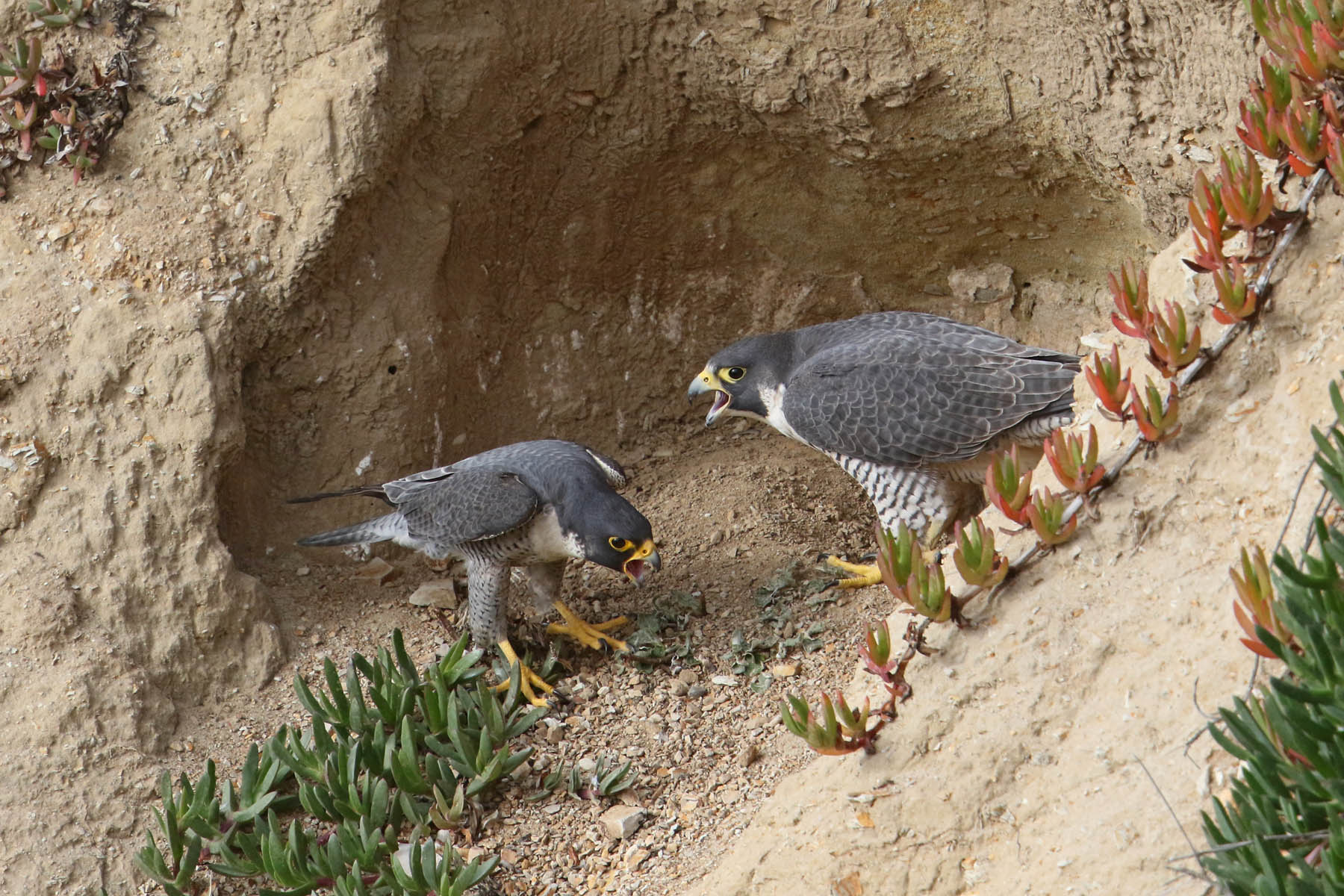 Below. Another image of the pair checking out the nest site. At one point the male did some house cleaning and was kicking debris out of the nest scrape with his feet. 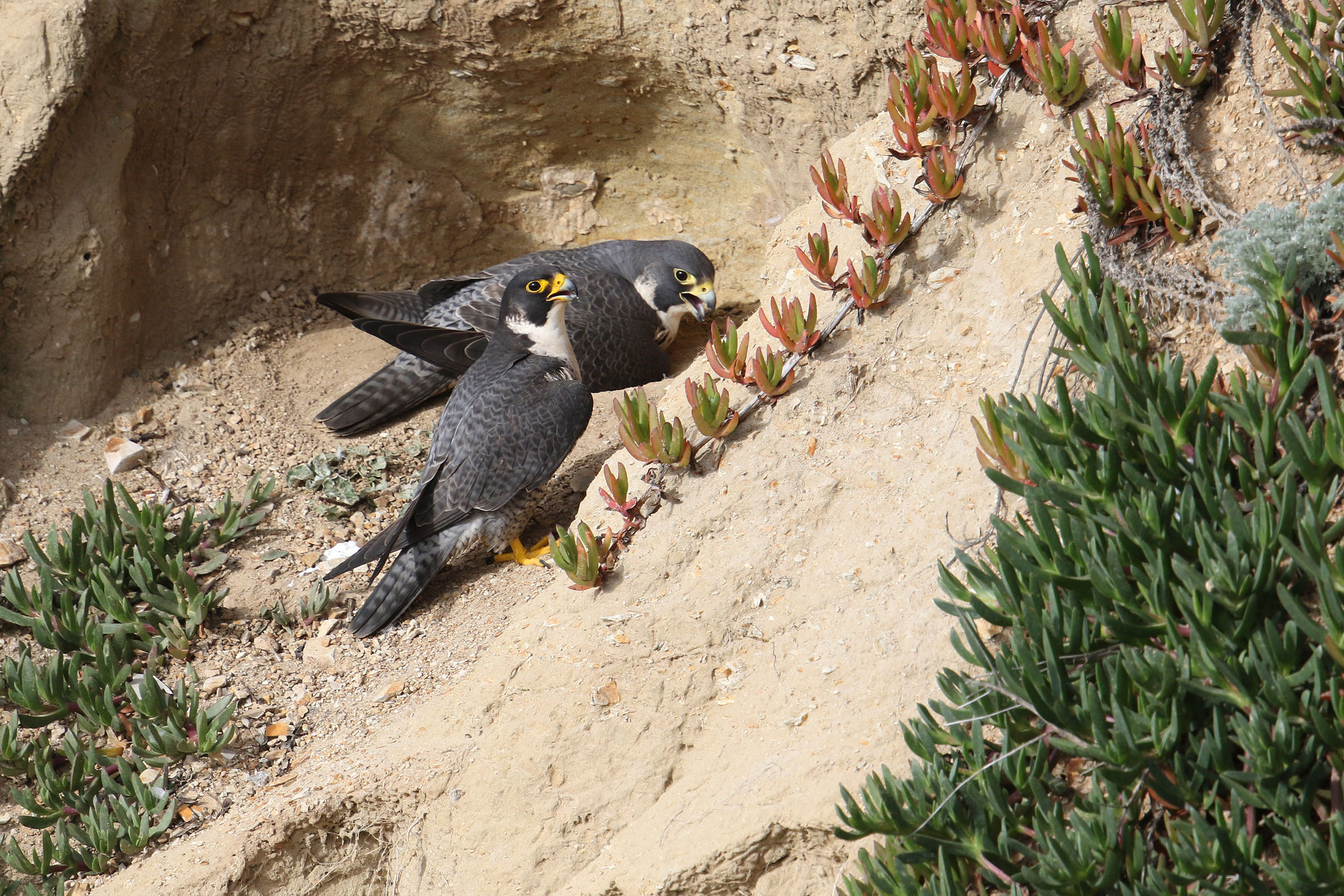 Below: the pair copulates on the pinnacle above the nest site. Like most birds, falcons lack a penis so copulation involves a ‘cloacal kiss’. That means lots of flapping with the male on the female’s back and then the male’s tail eventually wraps around the female’s tail so that their cloacas touch. The whole shebang (pun not intended but I will go with it) is over in less than a minute. 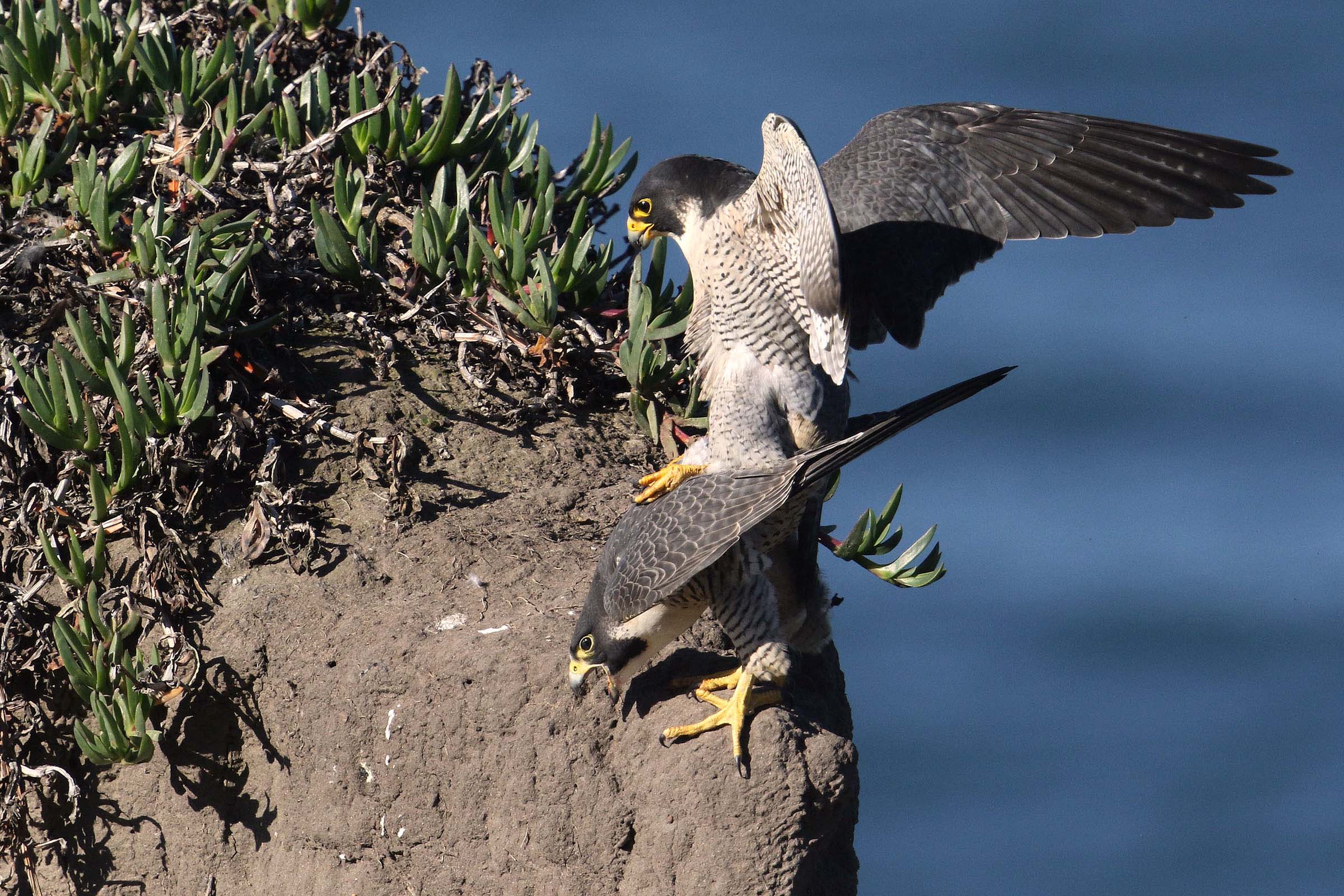 Below: The male leaves the nest, now containing one egg. 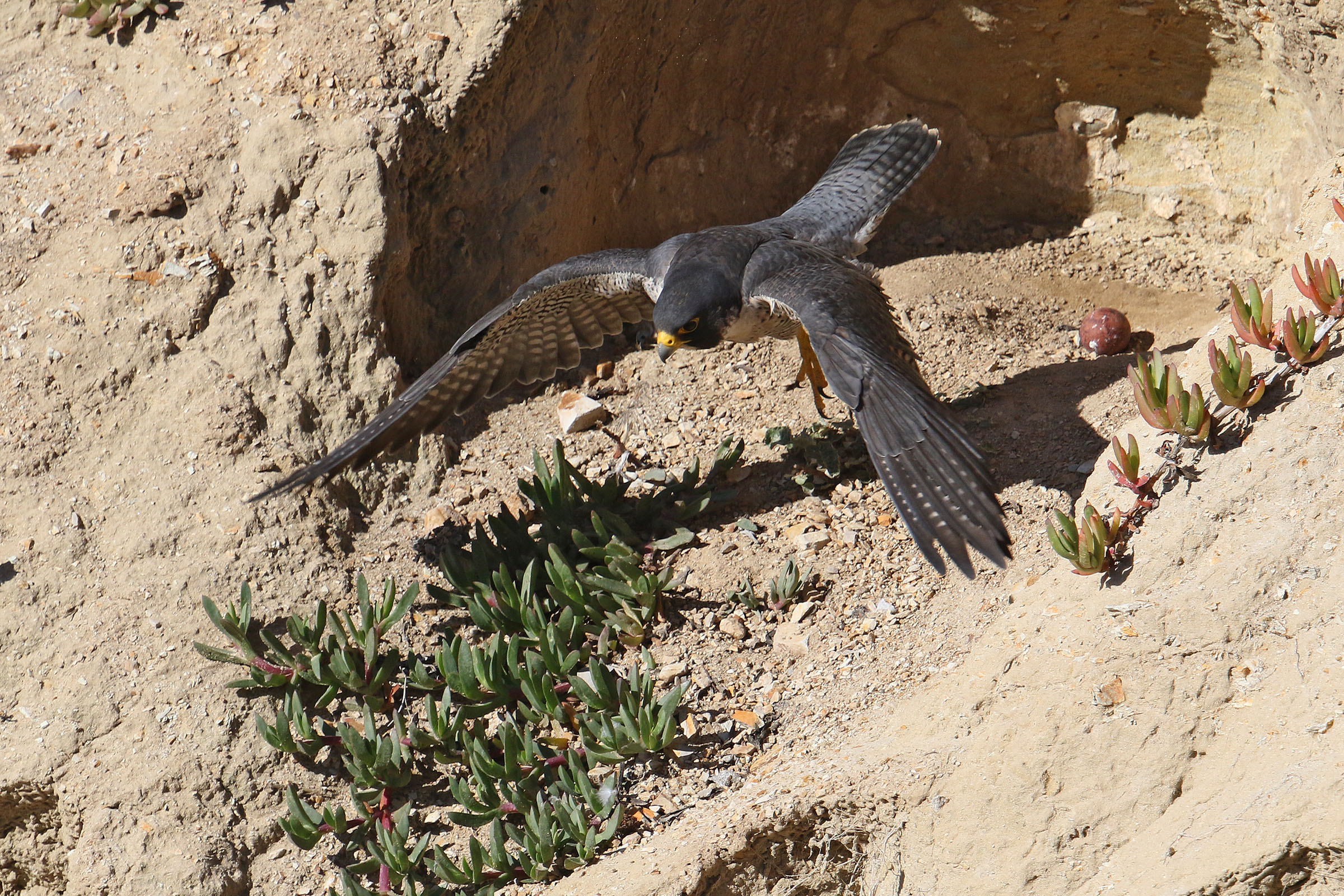 Below: A few days later the nest has three eggs, possibly a complete clutch but I cannot be sure because when I visited the nest a month later, it was empty. I do not know what caused the nest to fail but predators like ravens and great-horned owls are known to cause problems in some areas. The birds did lay a replacement clutch, back in their hidden nest out of view, and they fledged at least one youngster (seen flying around after fledging). 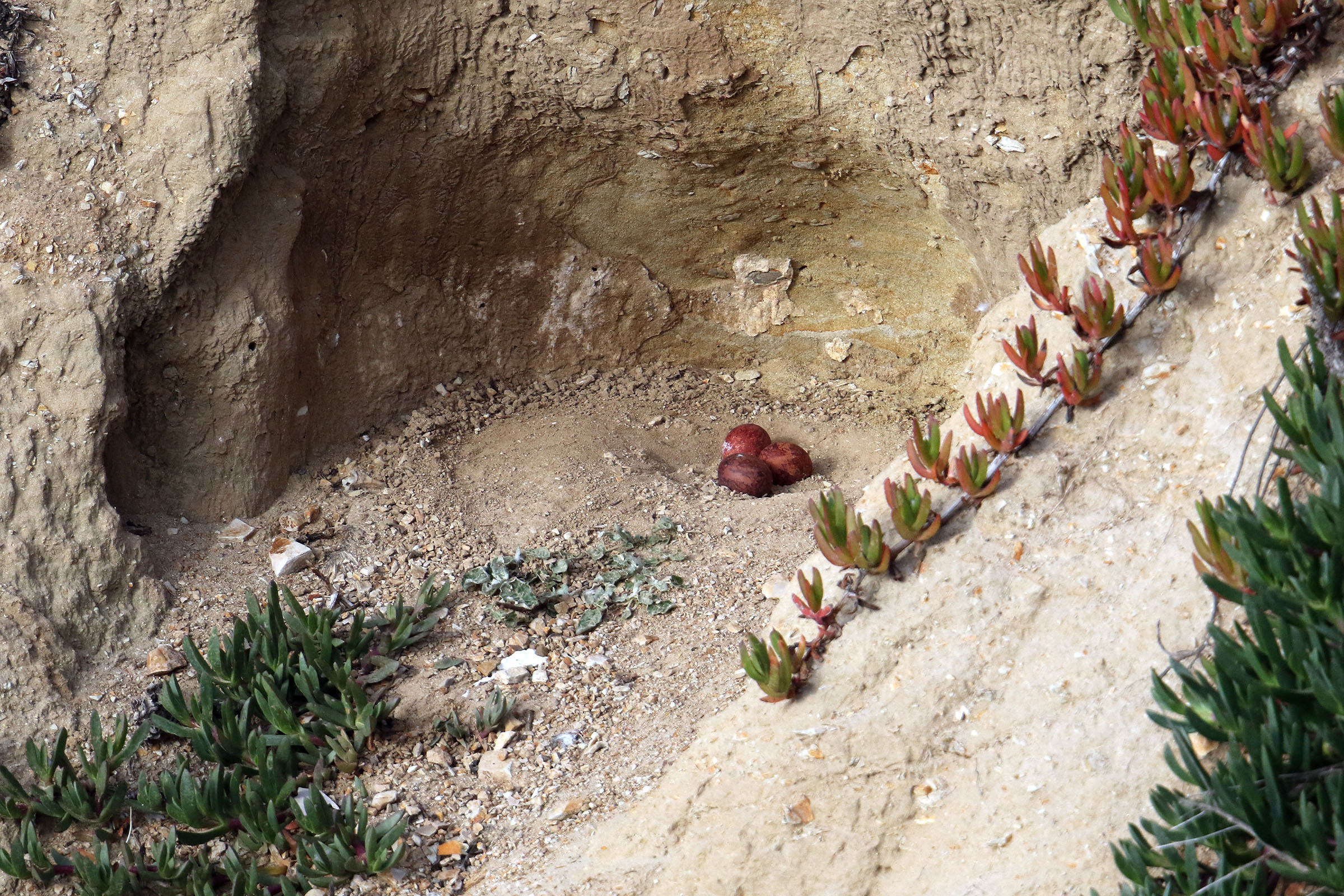 Below: I did not follow my favorite pair much last year but when I visited towards the end of the nesting period I was surprised to see that they had four very large chicks—a large brood for this species. Here are the kids just before fledging. This is the small cave nest they normally use but this year (2019) they did not use this nest so I will have a different vantage point when I share photos from this year in a later post. 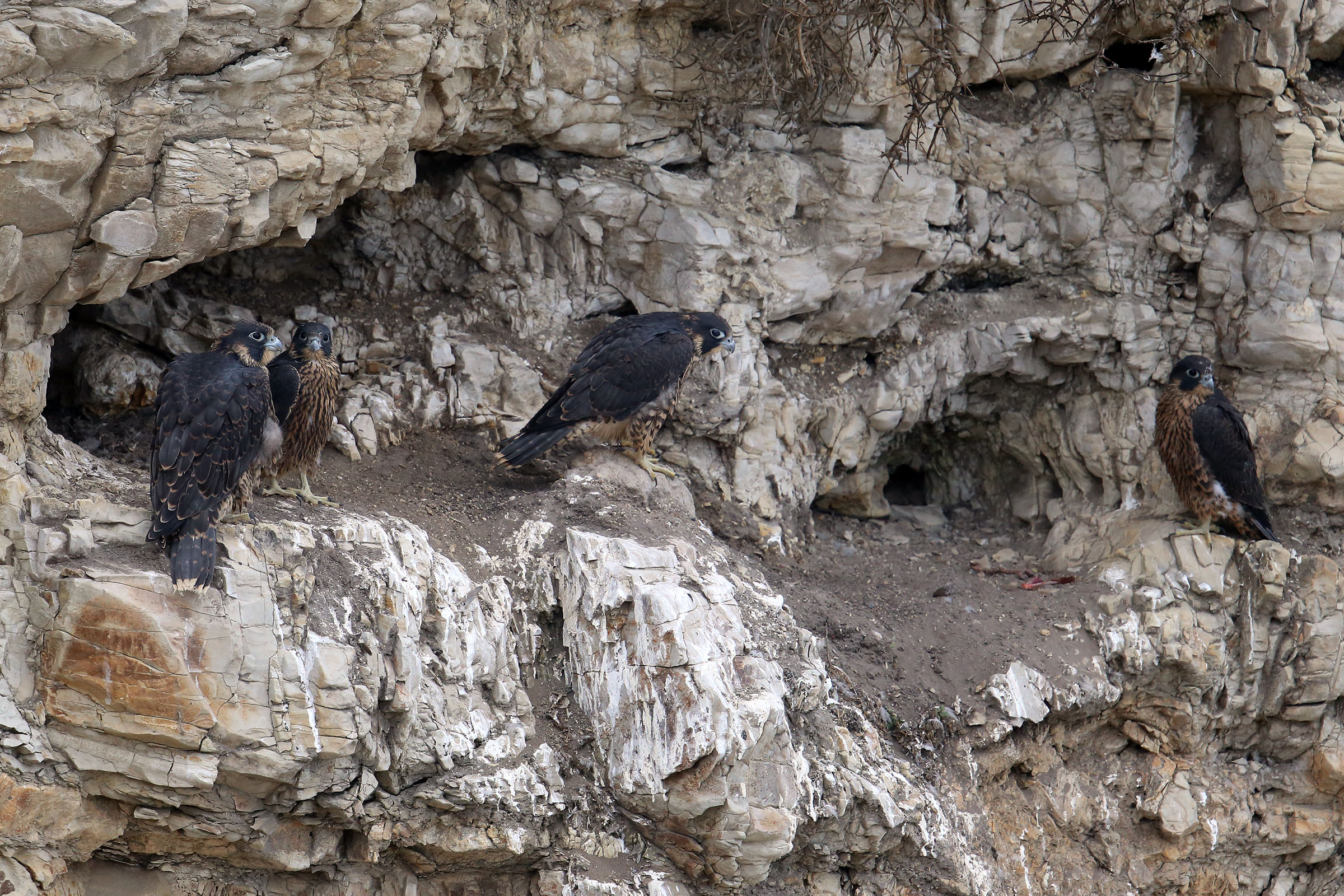 Below: Just after three of the chicks had fledged I arrived to see an unusual prey item in the nest—a pigeon guillemot (a relative of puffins and murres).  Their favorite prey item, by a large margin and very consistently over the past five years, is the introduced Eurasian collared-dove. This gets boring after a while so it was nice to see a native food item (not so nice for the guillemot, however).  It almost seems like the wait for the days or times when I am absent to bring the really interesting diet items in. It almost seems like they are taunting me! I often see the feather remains and realize that something interesting was on the menu while I was away. 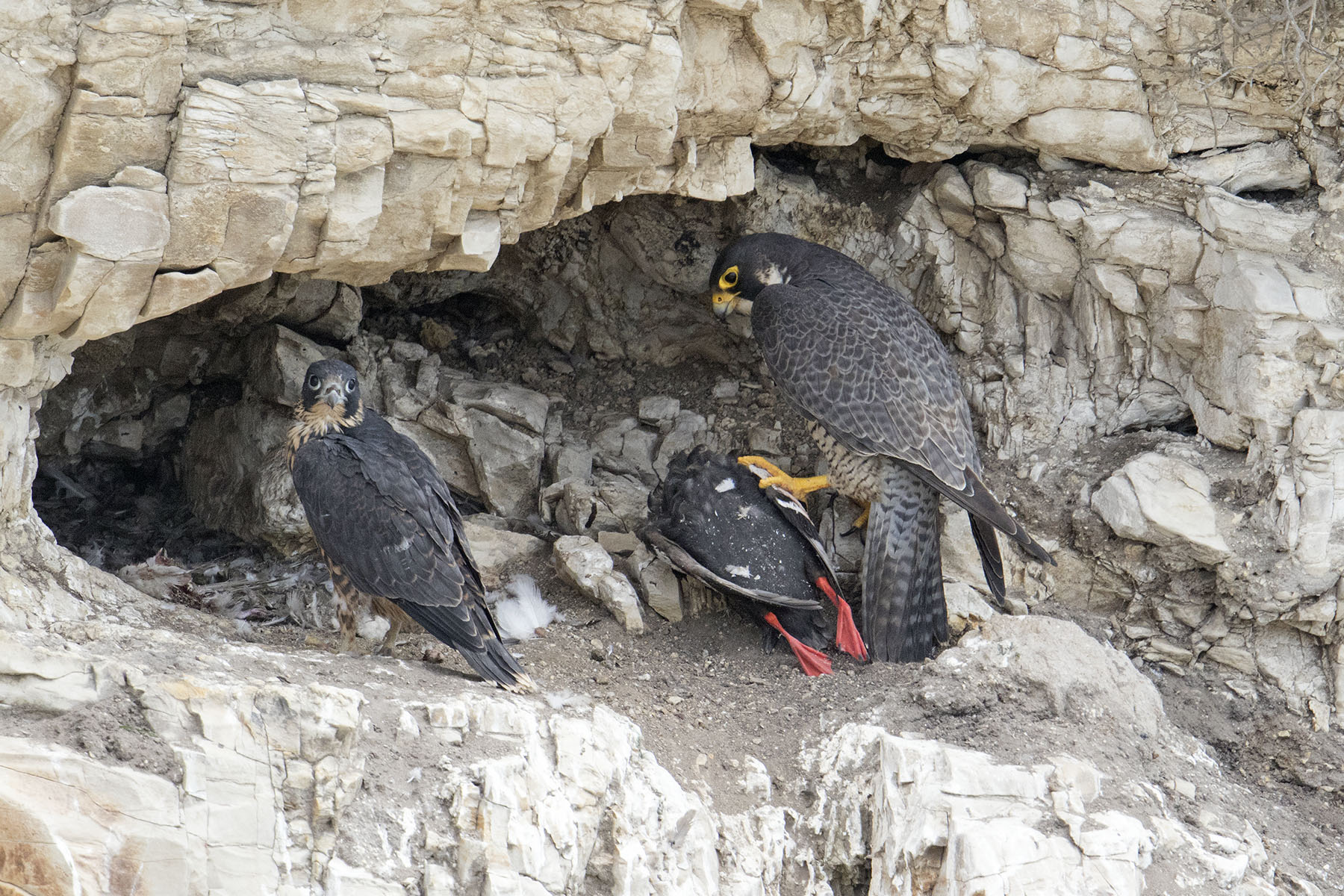 Below: After fledging, the chicks often take prey items from the parents in aerial transfers. A fledgling botched one of these transfers and dropped the dove carcass, and it then fell to the beach below the cliffs. The male flew down to a ledge just above where the dove had fallen and seemed to be looking for the fallen carcass. A pair of black oystercatchers had a nest on the ledge (nest just out of sight upper right of photo) and they were not amused to have the predator so close to their nest and they took several swoops at the male to try to chase him away. 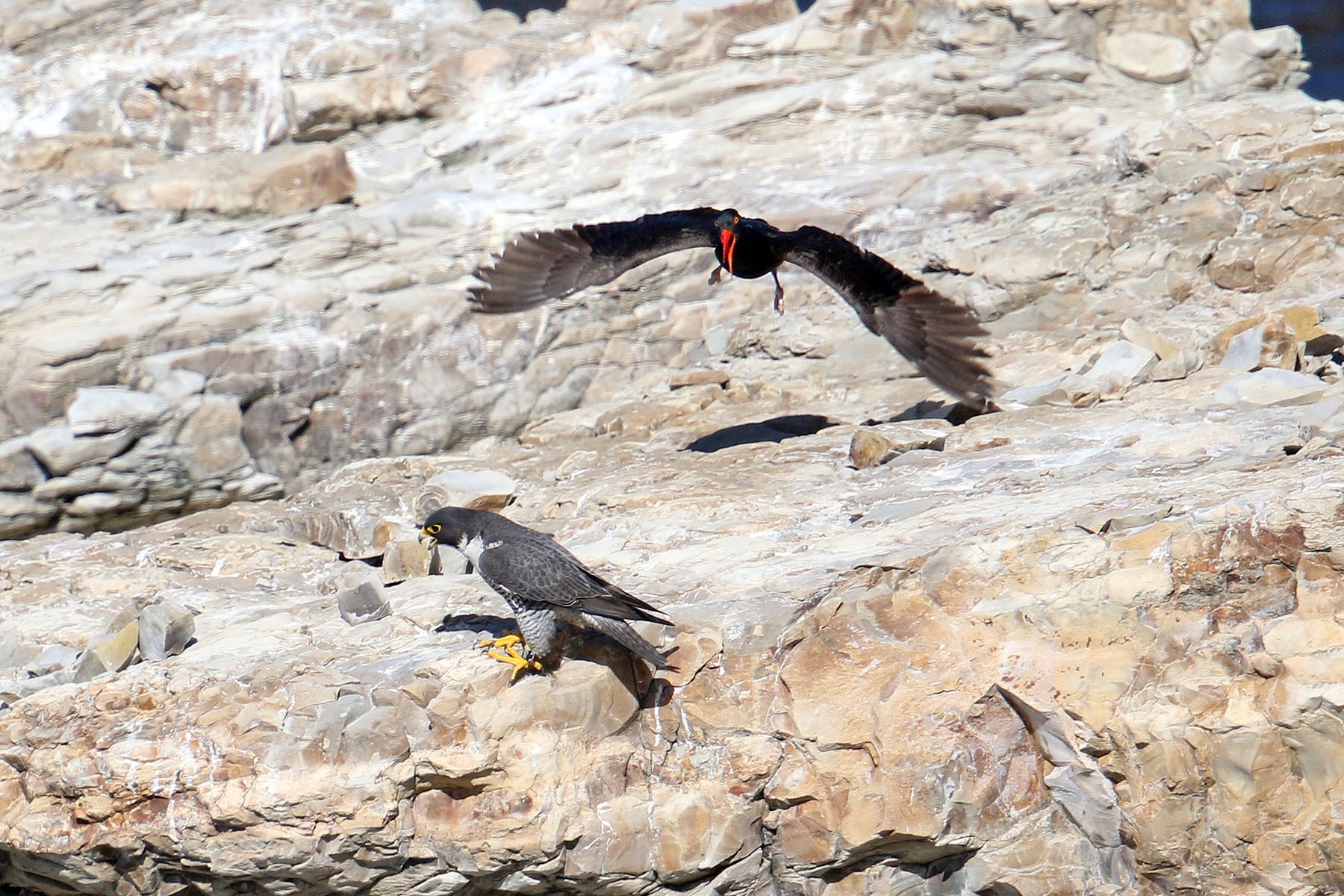 Below: The male eventually found the dove and the photo below shows him recovering the dove that the fledgling dropped. He first dragged it along the sand to get it away from the waves and was eventually able to get airborne with it. If he were a human parent he would be muttering “damn kid”. 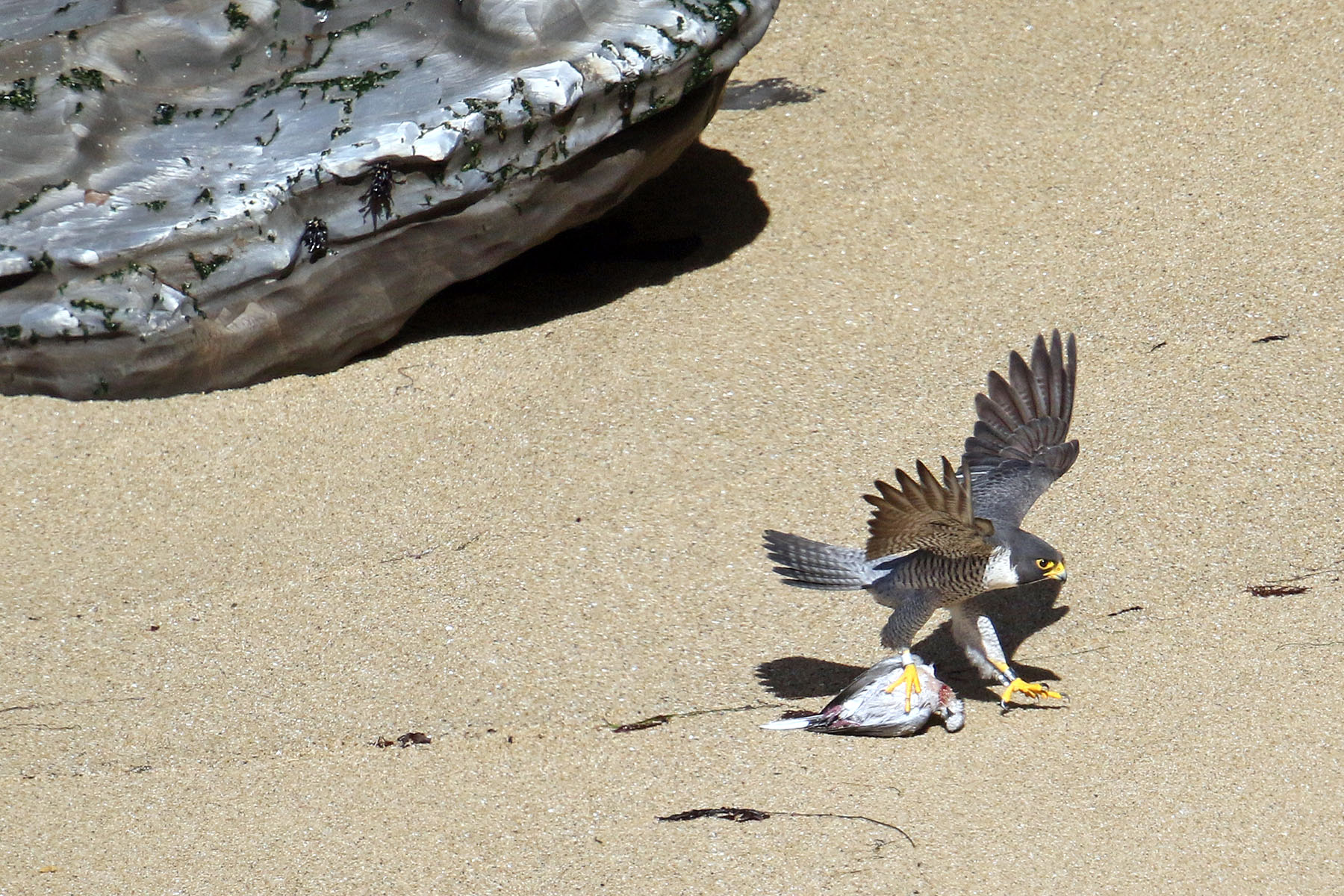 Below: As soon as the male was airborne with the dove the chick came in to pester him—it wanted its dinner back. The female also joined the fray; she is the one on the beach. 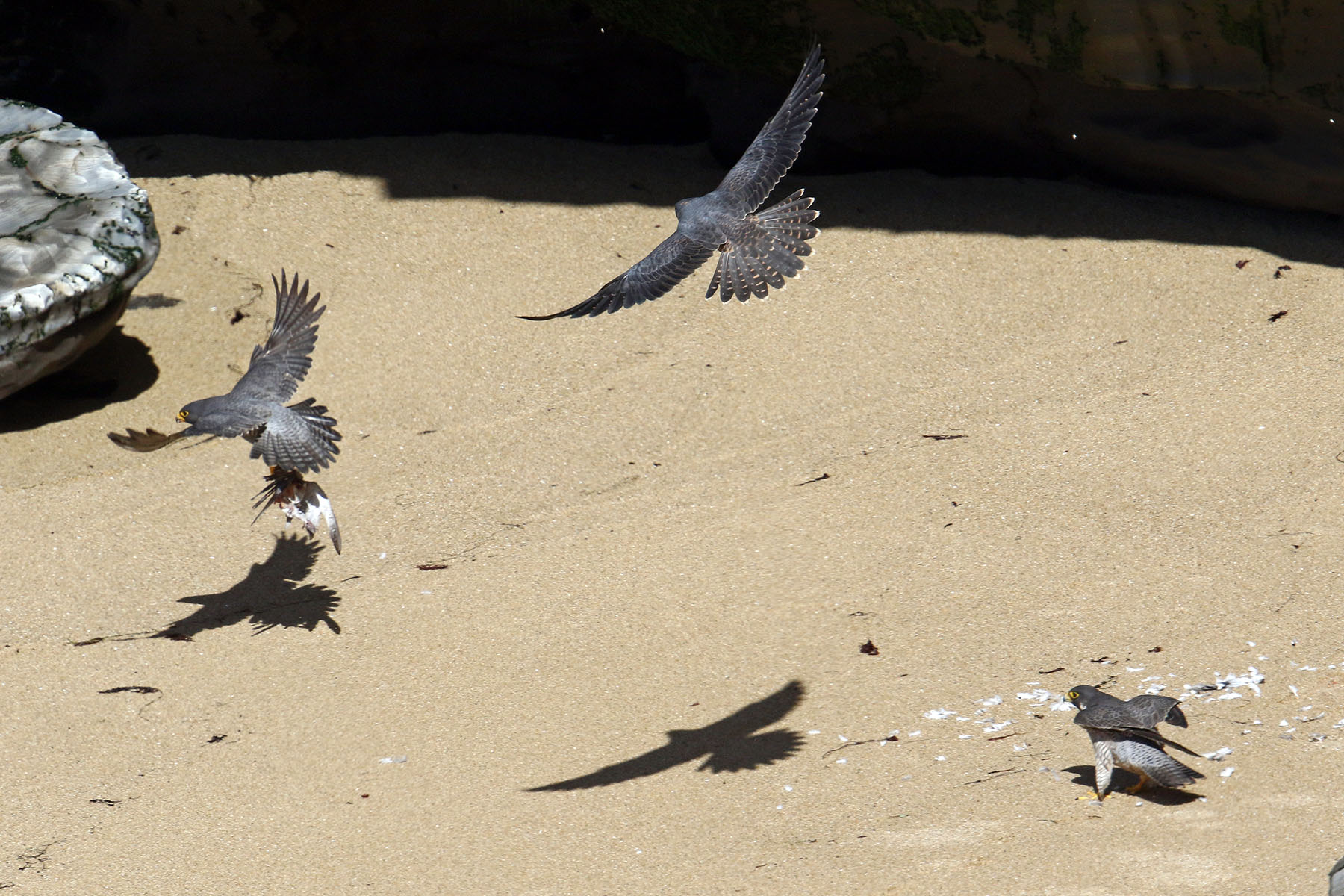 Very quickly the brood of four was reduced to two chicks. One chick simply disappeared and a second died when gulls knocked it out of the air and in to the ocean where it eventually perished from the cold. At first, it was able to swim by paddling with its wings but it made slow progress in the rough seas, got slower and slower, presumably from hypothermia from the icy water, and eventually some waves did it in. Below, the two survivors share a dove. 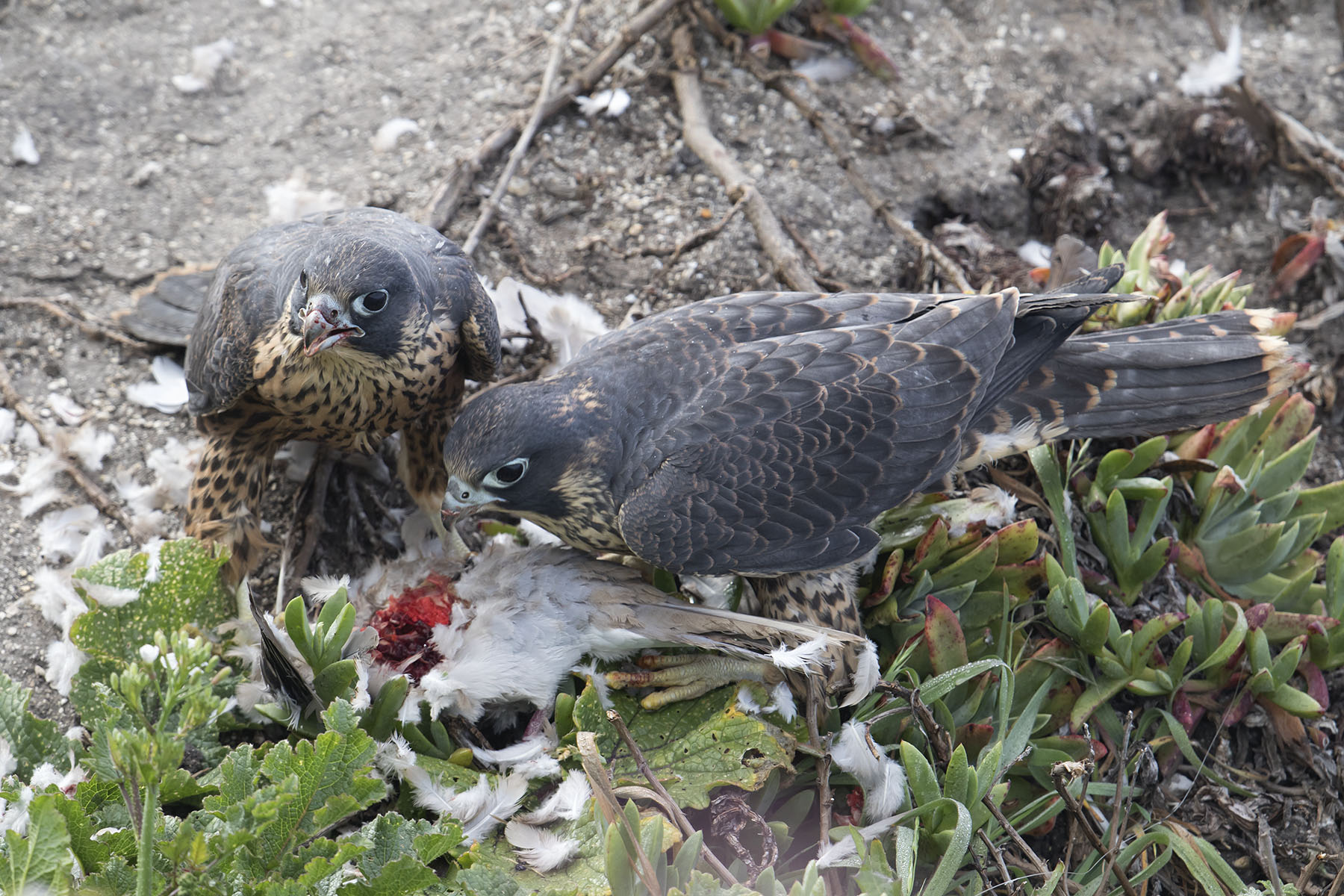