It’s a sad situation that the tiger (Panthera tigris), the world’s largest and arguably most magnificent wild cat, is heading towards extinction in nature. Fewer than 4,000 of them remain in the wild, and there are more in captivity than are roaming free in nature. Their current range is only 7% of the territory they occupied before humans killed them and destroyed their territory. Here, from Wikipedia, is a map of their present versus historical ranges. Sad, isn’t it? 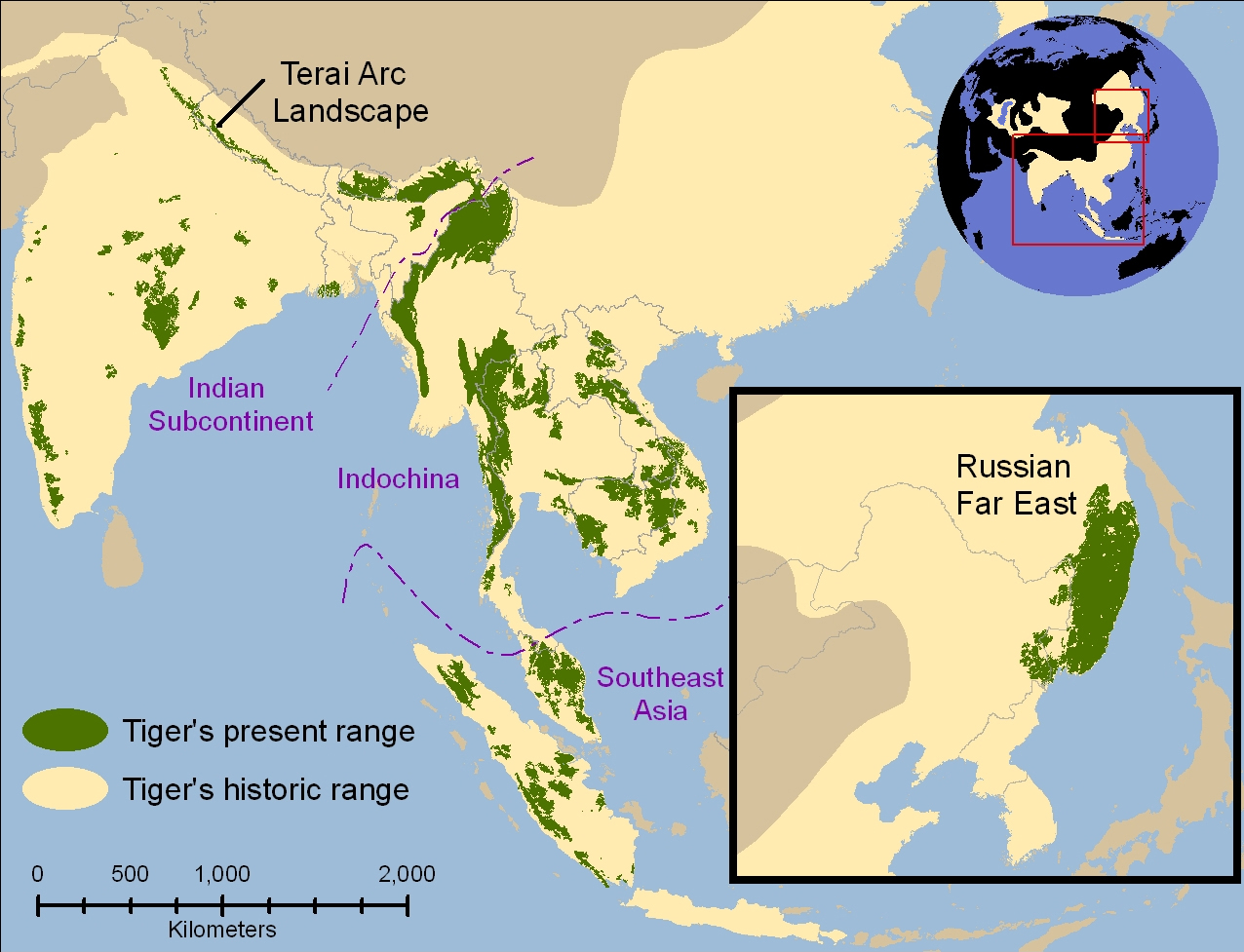 One strategy for saving the tiger is to recognize subspecies, which are populations of the species that are recognizably different, either genetically (usually through inspection of DNA sequences) or through morphology (morphological differences, of course, often reflect genetic differences). Subspecies used to be called “races,” and still are by some people, but the term “race” is now in bad odor because of its past misapplication to our own species.

The designating-subspecies strategy here is two-pronged, with one prong scientific and the other political. The scientific rationale is that because populations differ genetically, saving different populations that are genetically diverse is a way to conserve overall genetic diversity in that species. Why? It’s sometimes not clear, but reasons given are to enable the species to recover if populations go extinct from inbreeding (a loss of genetic diversity), to conserve populations that look different and thus could be considered to have diverse appeal, and to save rare alleles that might prove adaptive under environmental change. I consider this strategy ill-conceived for reasons I’ll mention below.

The political reason is simply because some conservation laws, like the U.S.’s Endangered Species Act of 1973, allow a population to be listed as threatened or endangered if it’s not an entire species but simply a subspecies: a genetically different population. If you want to save a species, then, one way is to help save its constituent subspecies, regardless of the genetic rationale above. All that’s required is that a population be designated a subspecies because it is genetically different from other populations, and then that subspecies cannot be touched. Exactly how different a population must be to be regarded as a subspecies is not clear, and is subject to discussion and argument by biologists.

The use of the “subspecies” category thus gives conservationists a way to save species by saving their populations, even if the genetic rationale supporting it is weak. But because most conservationists and many biologists, including me, see saving species as an intrinsic good, regardless of genetic differentiation, we can use the “genetic differences” regulations as a way to do what we really want to do: save species as wholes regardless of how genetically different their populations are. And that surely holds for the vanishing tiger.

In other words, it’s in the interests of species-loving biologists to designate as many subspecies as possible as a way to save species, regardless of whether we agree with the “saving genetic diversity” argument. (As I said, I don’t really buy into that argument.) Thus you can use even tiny genetic differences, perhaps as little as a single gene causing change in, say, color—or even a diagnostic difference in DNA sequence of unknown function—as a way to designate subspecies and thus save species.

Now some biologists do think that we need to conserve genetic diversity within a species, and sometimes they might be right. But more often I think it’s a tactic to enable them to do what they feel impelled to do: stave off the destruction of threatened species by any means possible.

I hasten to add, though, that investigating population differences is of interest in its own right. For instance, we can get an idea whether those populations might be reproductively isolated (no gene exchange because of biological differences), and thus true species rather than subspecies. Or the genetic differences might give us some idea of the history of the species and the evolutionary relationships among populations. Or you might be able to identify illegal wildlife traffickers by looking at the DNA of material they’re selling.

An increase in tiger subspecies—or rather, a genetic confirmation of traditional subspecies— comes from a new genetic survey of the world’s tigers by by Yue-Chen Liu et al., just published in Current Biology (paper here, pdf here; reference below; ask if you can’t get it). There’s also a summary of the study in this week’s New York Times (click on screenshot below).

The upshot of the paper:

Here’s a phylogeny of the tigers based on 11,600,055 autosomal variants, showing that they fall into six neat groups (consult the paper for caption and methodology) corresponding to the different subspecies already recognized (colors). Mitonchondrial and X-chromosomal analyses give similar phylogenies, and the numbers at the branches show that these are significantly demarcated using bootstrapping methods: 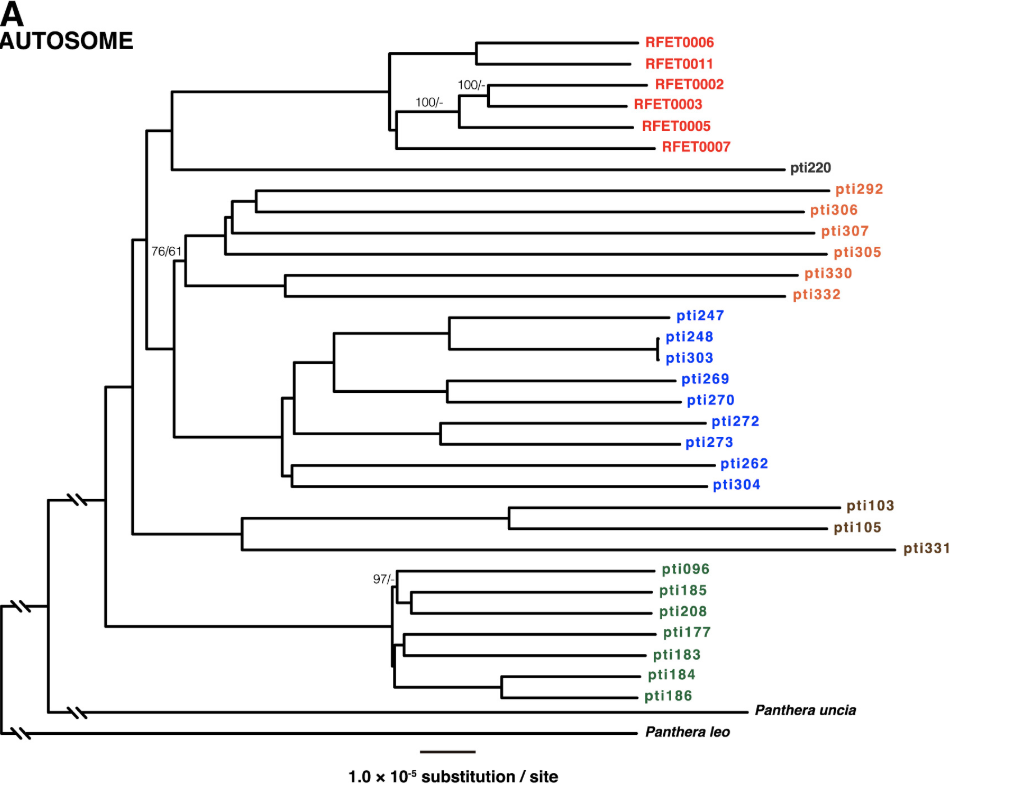 Below is a cluster analysis of tiger genomes using the “ADMIXTURE” program. The data are based on nearly two million variants on the autosomes. The different colors recognize units that the program can distinguish under assumptions of different numbers of clusters, with the number of clusters to look for set from 4 to 6. As you see, under the assumption of 5 clusters you get five subspecies, and with 6 clusters you get six subspecies. (This is not a trick, but a way to recognize hierarchically differentiated populations.)

But genetics does confirm the populations previously recognized by average trait differences. That’s not a novel finding, but the genetically diagnostic differences, say the authors, will help us conserve the species. As they say in the paper (my emphasis):

Because many of the conservation policies and measurements regarding the tiger, including coordinated captive breeding programs and legislations in several tiger range countries, are based on “subspecies taxonomy,” an appropriate description of subspecies is vitally important.

Considering the subspecies concepts presented above, the genome-wide signatures of phylogeographic partitioning and evidence for long-term restriction of gene flow and adaptive divergence jointly allow us to elucidate tiger evolution and corroborate six phylogeographic units. These findings provide the strongest genetic evidence for subspecies delineation in tigers to date, evidence stronger than that used to define subspecies in nearly any felid reported thus far. These population units correspond precisely with the geographic subspecies named much earlier. . .

Understanding the tiger’s natural history from a genomic perspective provides a data-driven foundation for subspecies recognition, conservation strategic planning, and management actions. Our general goals are to reverse the species’ decline by maximizing the efforts to preserve the genetic diversity, evolutionary uniqueness, and potential of the species Panthera tigris.

The New York Times article echoes the conservation importance emphasized by the study’s authors.  But, as I implied above, recognizing six subspecies rather than two is important mainly because it gives biologists a legal handle to save tigers in general. The genetic differences between populations, as diagnostic as they are, are in my view not sufficient reason by themselves to save all populations. Sufficient reason to save the populations, though it won’t fly with governments and laws, is simply because we need to save as many tiger populations as we can, because they add to our world, because they were here before us, and because we have no right to wipe out a dwindling species for our own selfish needs. Despite their fierceness, tigers can’t fight human development. Most nature-loving biologists simply want any way to save tigers, and genetics (again, this is my opinion) gives them an excuse—but not a good population-genetic reason. Any one population of tigers surely contains enough genetic variation to replenish all the other populations, whether that variation be common or rare. And, of course, new mutations occur.

Here’s what one of the authors say in the NYT piece:

A system recently proposed by some scientists that would classify the world’s tigers into two subspecies would harm the world’s remaining tigers rather than benefit them, said Shu-Jin Luo, a geneticist at Peking University who led the study. Preserving what is left of tigers’ genetic diversity will require ensuring that all remaining subspecies are taken into account, she and her co-authors argue.

“If you think that all tigers are genetically homogeneous, you might say if you lose the Amur tiger, you still have the Bengal tiger — and that’s O.K. because they’re very similar,” Dr. Luo said. “But that’s not O.K., because now we know that tigers are not all alike.”

No, tigers are not all alike; they differ on average in appearance, and in DNA sequence, some of those differences probably being the result of geographically varying natural selection. But what do we gain by saving subspecies because they have genetic differences. What, indeed, are the genetic differences we’re trying to conserve? Genes for morphology? Those differences are inherent within in any one subspecies, so you could constitute any extinct population simply by either selecting variants within another subpopulation, or transplanting members of extant populations to areas of extinction, where selection will act eventually to create a new subspecies (it may be different from the old one). Are we trying to save variants that might be adaptive in the whole species, enabling it to respond to new selective pressures? If so, those variants are probably latent in several populations, so you don’t need to conserve them all. Are we trying to prevent inbreeding? Well, there’s no evidence that extinction is caused by inbreeding in this species, and to save them that way requires crossing members of different subspecies, which wipes out the differences we’re trying to conserve in the first place.

What I’m not saying here is that because the rationale for conserving genetic variation in tigers is weak, we shouldn’t try to save every subspecies. No, what I’m saying is that the genetic-variation excuse is a way that some biologists, chafing under legal restrictions, try to save every member of a species, no matter how many subspecies there are. Having six rather than two subspecies of tigers makes it easier to save them all, but what if the genetic variation analysis had shown just two, or four, distinct subspecies? Would it be less pressing to save tiger populations? I doubt that even conservationists would agree. And that shows that we’re using political rather than sound genetic rationales to save endangered species.

My message here is just this: we should save all the tigers because tigers are an inherent good. If we have to do that by recognizing subspecies, well, that’s the way we have to do it. But we shouldn’t pretend that we need to save subspecies to “conserve genetic variation in tigers”. That rationale is very weak, and makes conservation dependent on subjective criteria like the frequency of DNA variants that may not even play a role in adaptation—now or in the future. I think it’s time for conservation geneticists to tell us exactly what kind of genetic variation they want to save, and why. (There’s very little written about this.) And it’s time for biologists to admit that for many of us, our interest is not in conserving genetic variation, but in saving every tiger possible. The subspecies ploy is one way to do that, but it’s still a ploy.

The way to save tigers is not to designate subspecies and then use various schemes to conserve genetic variation, but to save the habitat in which tigers live and to keep people from poaching them.

43 thoughts on “A new paper confirms six subspecies of tigers, promoting conservation of the species (with some curmudgeonly comments on conservation genetics by Professor Ceiling Cat)”