Once again we have a nice science-and-photo post by biology professor Bruce Lyon from the University of California at Santa Cruz. His notes are indented, and the subject is owls, also known as Honorary Cats™.

A second batch of owl photos and natural history to follow on the Northern Pygmy Owl post (here) from a couple of weeks ago. To contrast with the pygmy owl, here are some photos of a very large species, the Great Gray Owl (Strix nebulas), the tallest North American owl. Their height is deceptive thought because under all those feathers is a puny body—despite being five inches longer than Great Horned Owls (see post about them here), Great Grays Owls are 15% lighter than great horneds.

Below: a comparison of the heads of great grays (left) and great horns (right) reveals another important size difference—great grays have very small eyes. I do not know if this is just a consequence of great grays having smaller heads when the feathers are removed (i.e., skull size), or whether, relative to skull size, they have smaller eyes. I suspect they do. They often hunt during the day, so diurnal hunting might not require large eyes. And the fact that they can find prey based on sound may make the eyes less important for hunting than for great horns. I do not know if great horneds can hunt by sound alone but I suspect not. Their facial disc is not as well developed as the great gray and they also have bilaterally symmetric ear openings. 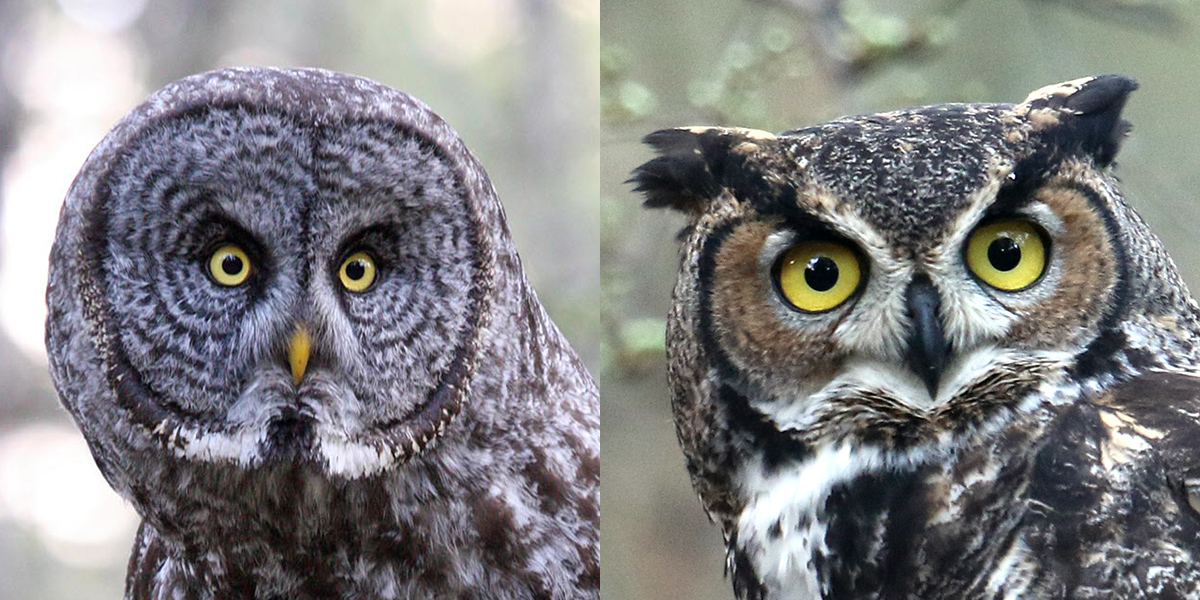 Great Gray Owls are one of my favorite birds, period! They seem mystical with their huge heads and facial discs, and they have a slow flapping flight that is almost butterfly like. They also live in beautiful wild areas that have a mix of coniferous forest and meadows for hunting. Small rodents (voles, mice, lemmings) comprise the bulk of their diet (90-95% depending on location). It’s amusing to think that tiny pygmy owls often take larger prey.

Below: A great gray owl hunting in a burned-out forest not too far from Yosemite National Park this spring. Hunting involves sitting on a perch for a long period of time and then gliding down and pouncing on prey. 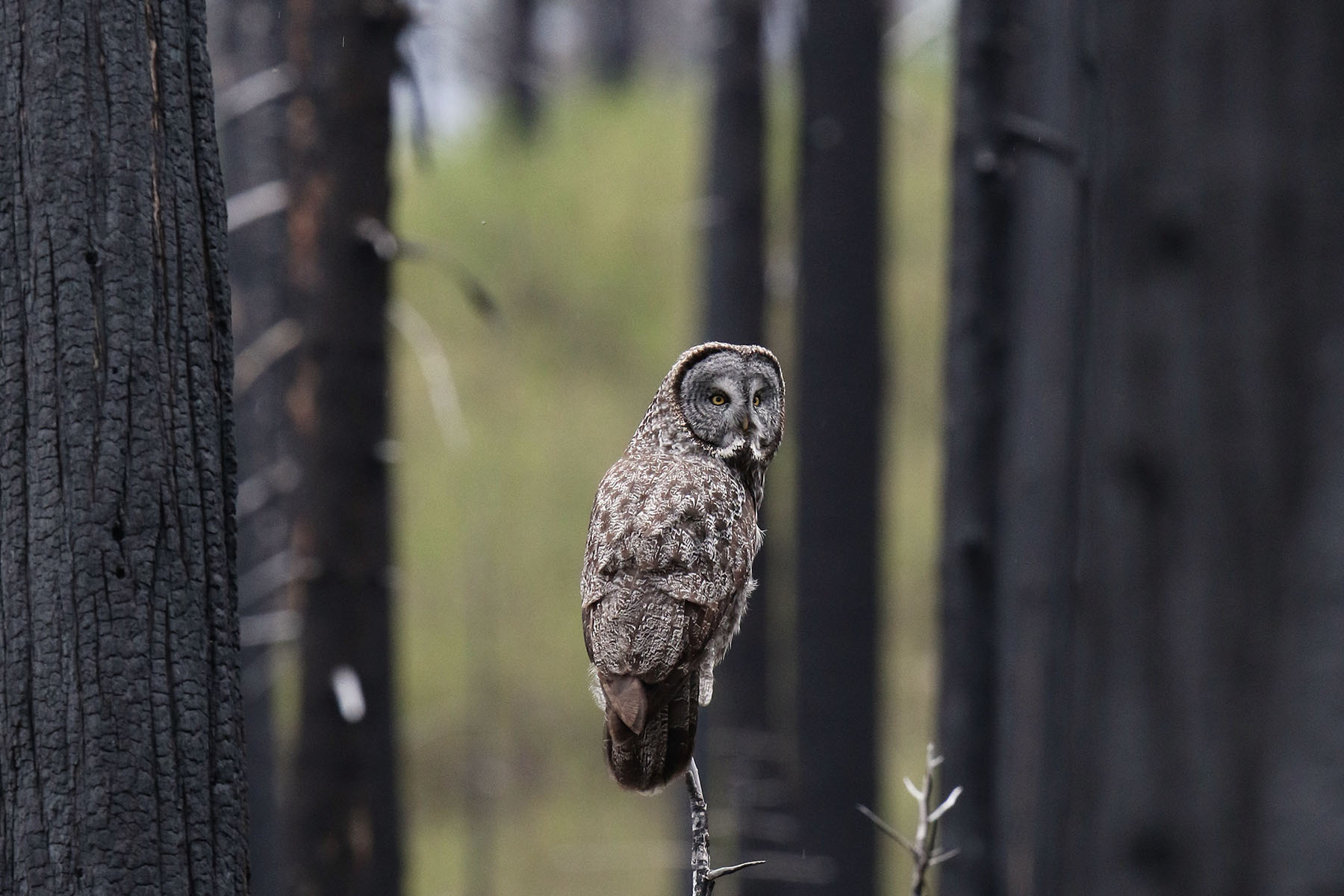 Below: When the owls are sitting still next to the trunks of large trees they can be remarkably cryptic. Another owl near Yosemite. 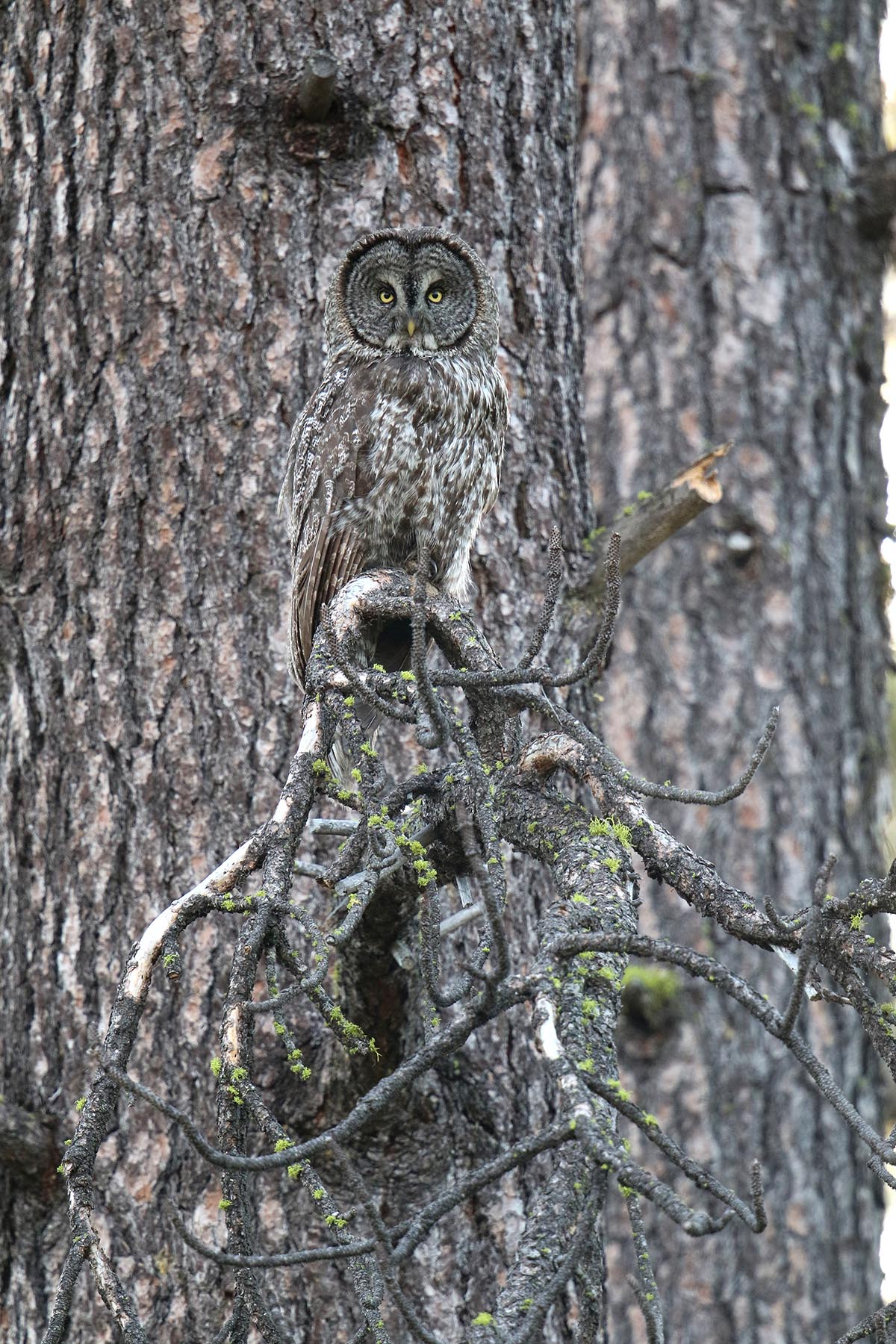 Below: The same bird hunting in a meadow. It is much more conspicuous than in the above photo but they can still be surprisingly easy to miss even when out in meadows. 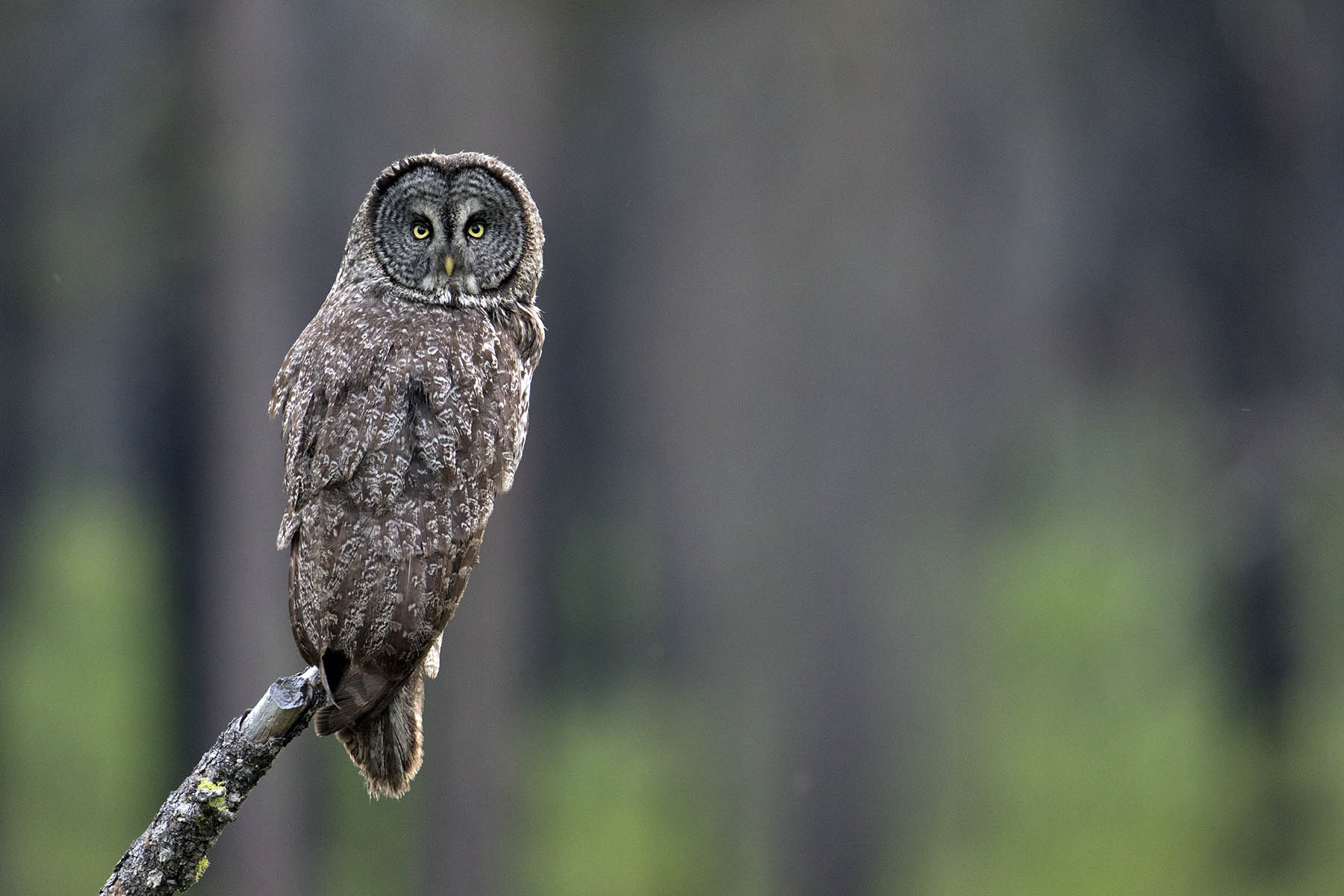 These owls can hunt entirely by hearing, and the big facial disk apparently serves as a parabola to focus sound on the asymmetric ears used to triangulate and pinpoint the location of a sound source. In winter, the owls can locate mice hidden under the snow and then glide to the area and punch down hard through the snow to snatch the rodent. They are deadly accurate. A friend who watches gray grays in winter in Canada has several times had an owl glide in from a perch a hundred meters away and then punch through the snow and grab a mouse a mere couple of feet from where he was standing. These birds can be extremely tame and apparently can hear mice from a long distance away. Below is video clip from National Geographic showing a bird hunting in winter.

These owls breed in the forest near the wetlands where I do my coot research in central British Columbia but it took me many years to find a nest. Great gray nests can be found by following an adult returning to the nest with prey.  I found my owl nest by watching a great gray catch a mouse in a meadow and then fly off into the woods. I knew it was going to its nest so I sprinted after it for about 400 meters but then lost sight of it as it disappeared in the fairly dense forest.  On whim, I continued on in the same trajectory the bird had been going and after 300 more meters I encountered the bird now flying back towards me in the opposite direction. I went another 200 meters to where the bird had flown from and heard the faint calls of a female calling from the nest and her calls led me to the nest (she was probably telling the male to keep hunting). Unfortunately, the nest was in the worst possible location for observing or taking photos: it was in an old raven nest very well hidden at the top of a tall spruce. However, once the chicks fledged I was able to get great views of the family hanging out—this pair of birds was completely oblivious to people.

Below: Look at the massive head on this bird! I think it hears a mouse. 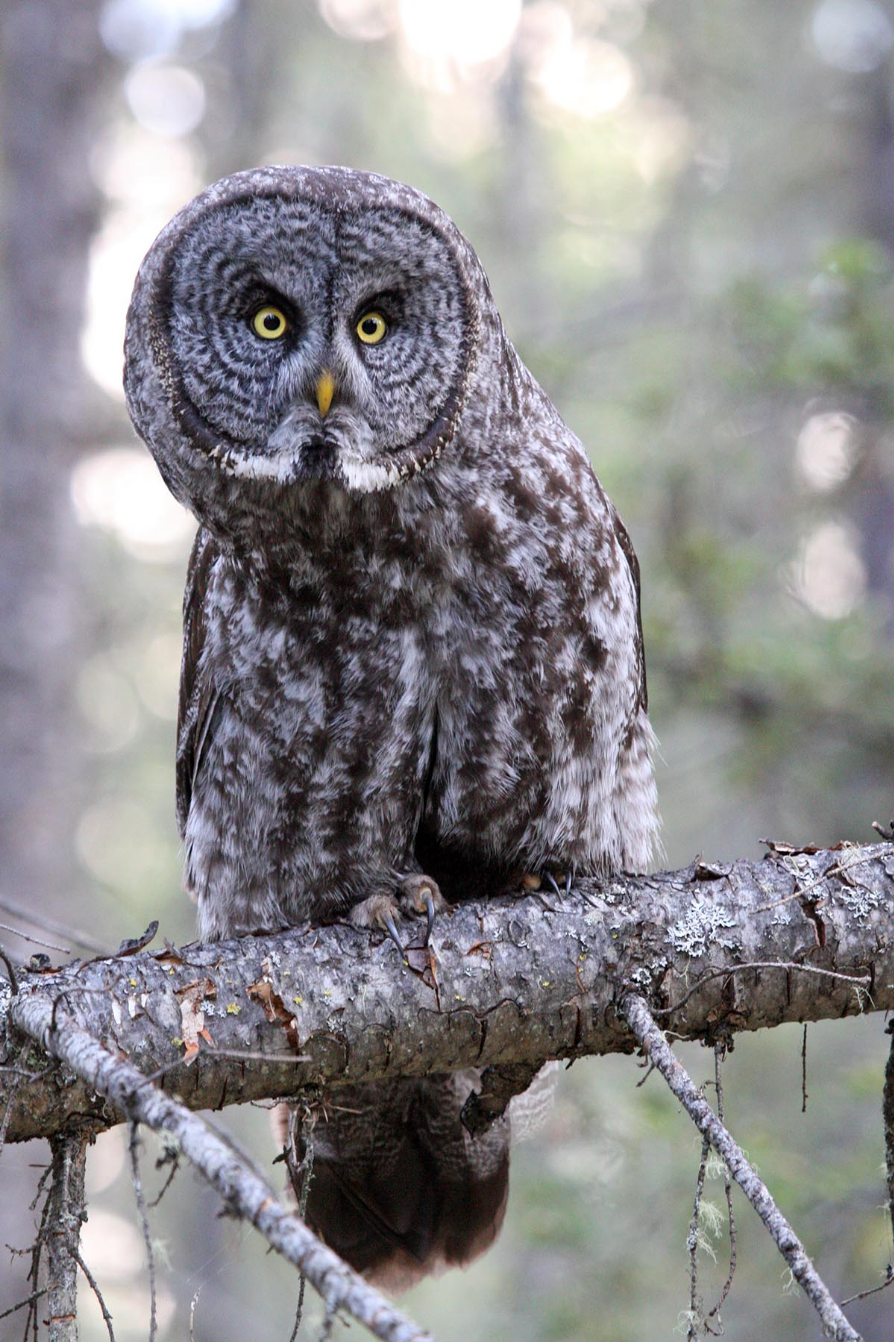 Below: The same bird. This bird has heard something rustle in the underbrush and has gone into what I call ‘mouse mode’. They often have a relaxed posture but when they hear something that could be rodent, their comportment changes—they stare intensely at the source of the sound and their entire posture changes and they often cock their head back and forth, presumably to pinpoint the location of the sound. 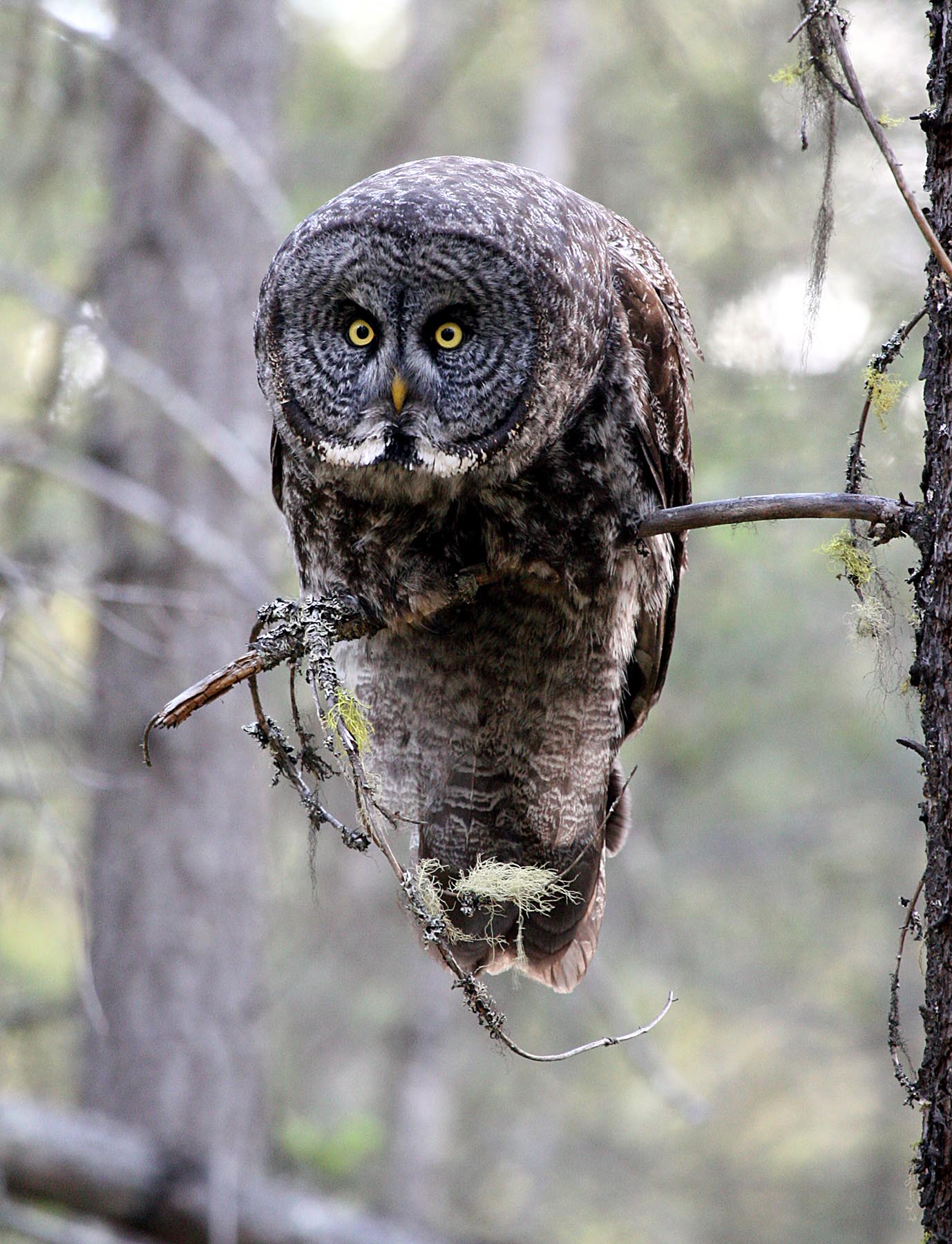 Below: The same bird hunting in the forest in the early evening when the light was quite nice. 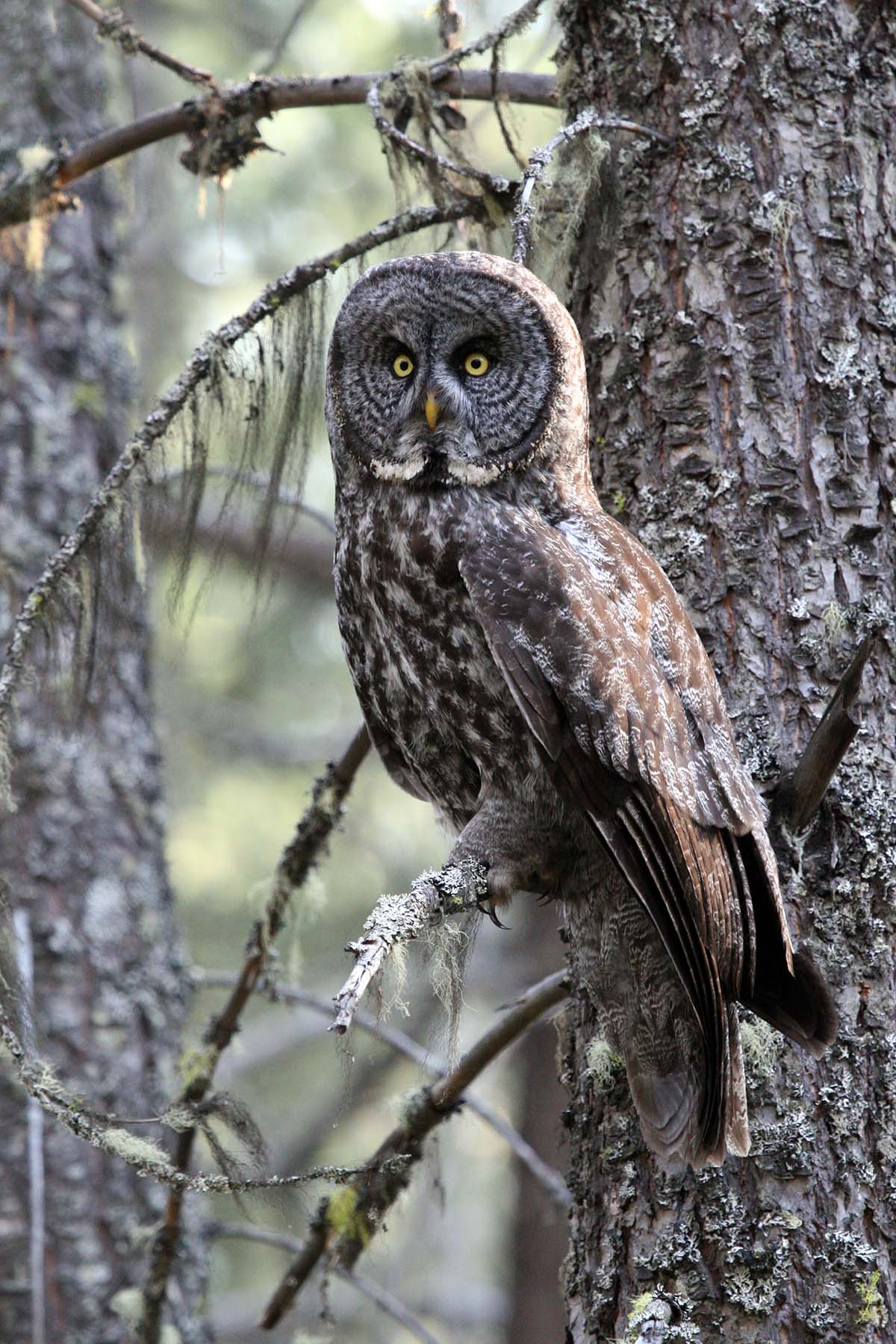 Below. Something suspicious has been detected and the bird launches for a pounce. 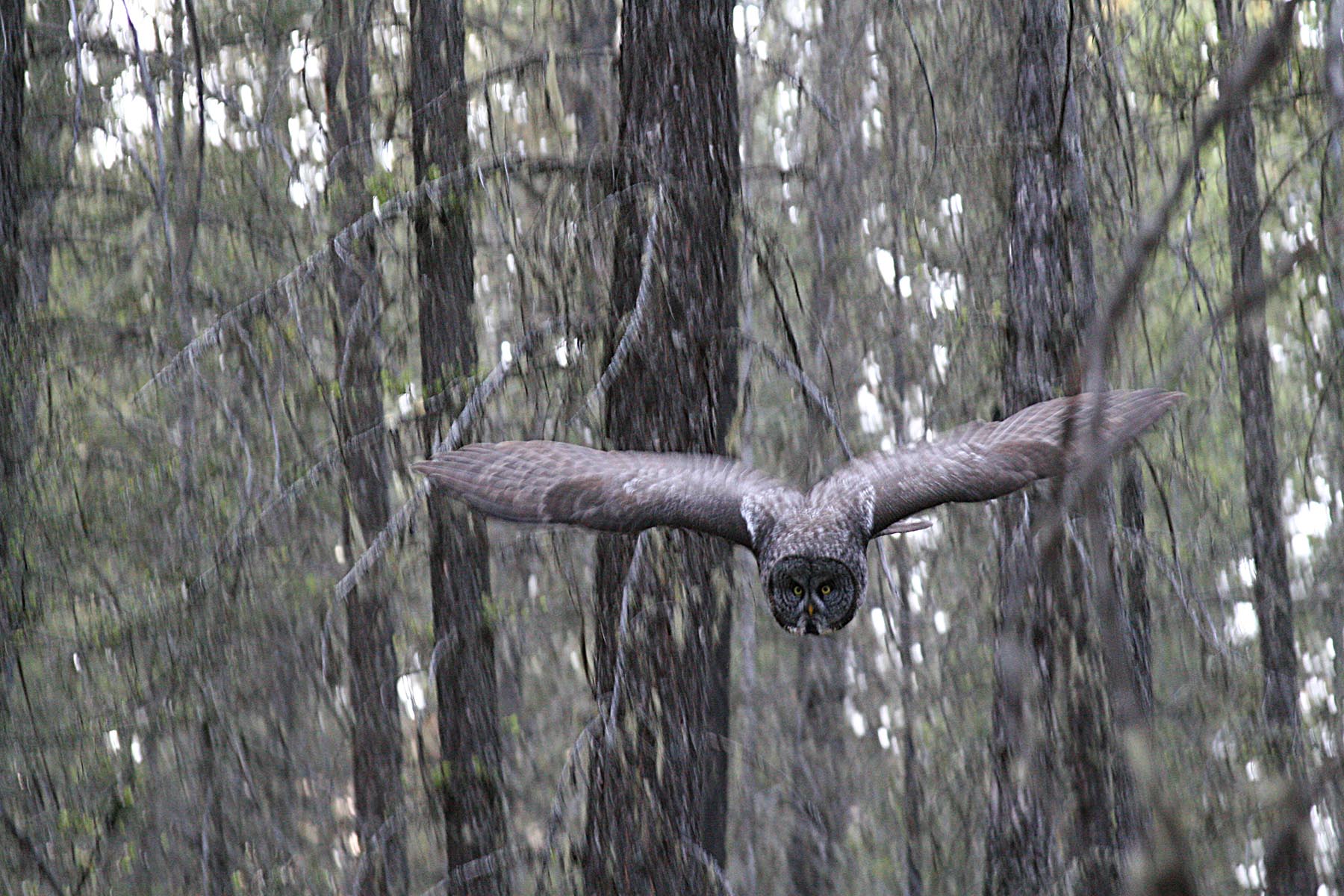 Below: One of the three chicks out of the nest. Owl chicks often leave the nest before they can fully fly. They scramble around the branches and are sometimes called ‘branchers’ at this stage. 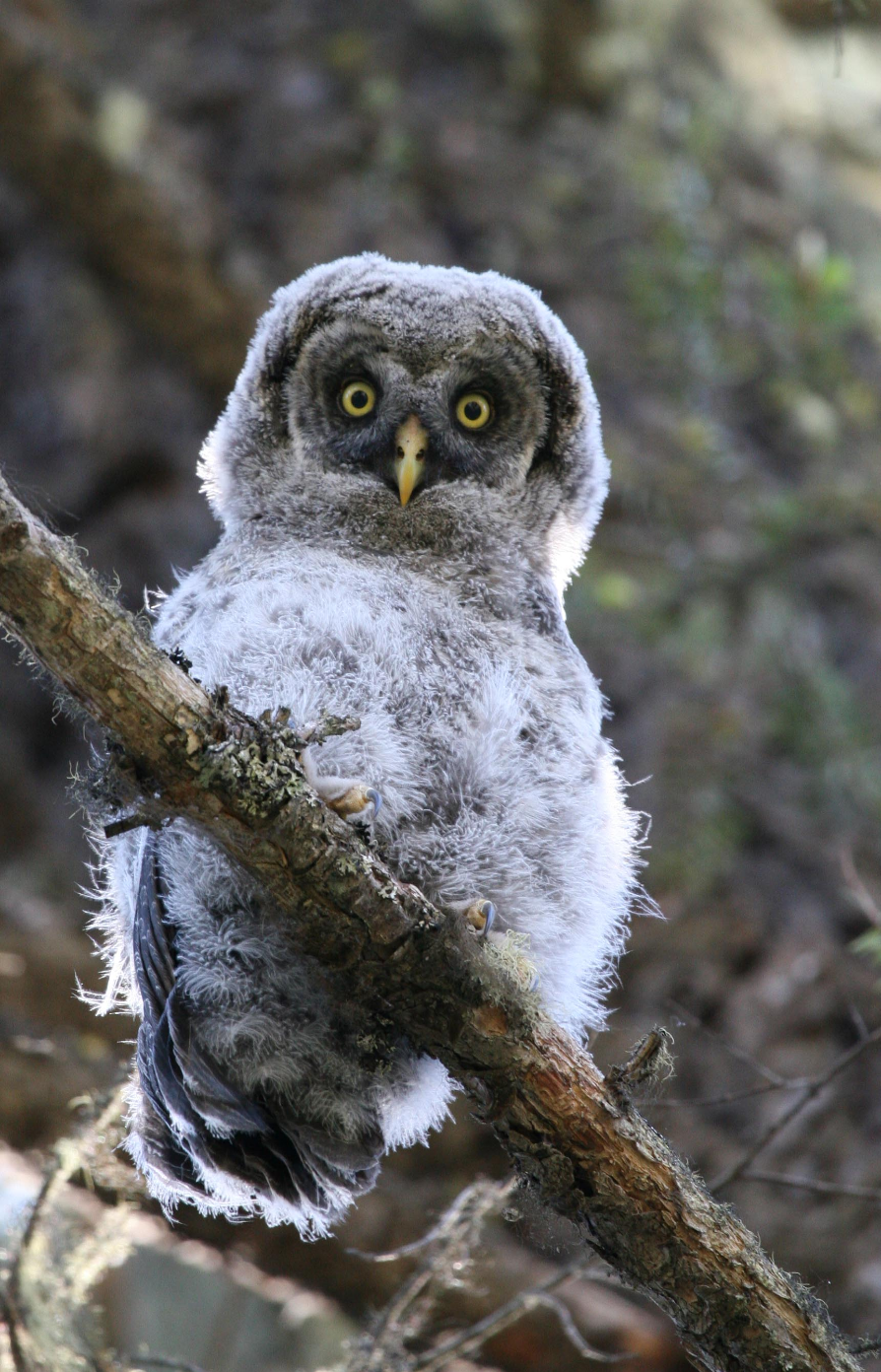 Below: One of the fledgling next to the trunk of a very large Douglas fir. Although the birds nested in a tall spindly spruce, there were lots of large Douglas fir nearby. This nice patch of woods has since been logged.