Reader Bruce Lyon, you may recall, is a professor of Ecology and Evolutionary Biology at the University of California at Santa Cruz. He provides not just photos but illustrated scientific tales, and here’s a good one about owls, which includes two of his videos. Bruce’s comments are indented.

Here are some images of Great Horned Owls (Bubo virginianus) that your readers might enjoy, given that owls are honorary cats on WEIT.  This pair of owls nests in a park in Santa Cruz California. They normally use a eucalyptus grove away from areas that are heavily visited by people. However, early this year they moved to a very heavily used area, roosting right beside a deck area that is used for viewing monarch butterflies. This deck is often visited by hundreds of people each day, including large and noisy groups of school kids, and the owls seemed completely indifferent to all of this.

My guess is that the owls moved to this location because they had their eyes on a Red-shouldered Hawk (Buteo lineatus) nest—owls do not build their own nests but rely on cavies or old nests from other birds like hawks and ravens. The owls visited the nest several times and I thought they were going to use it but the crows had other ideas. Crows eventually discovered the owls and began to mob the pair intensively in the evening and the owls gave up on using this area and went back to their traditional area. They nested there and recently fledged two chicks.

Before the crows came on the scene, the owls were very fun to watch. They would come off their roost while it was still light and then perch, hoot and greet each other a mere 20 feet from the viewing platform, often at eye level. I have not seen such cooperative and tame great horned owls before.

Below. Last November the students in my ornithology class and I watched red-shouldered hawks refurbishing their nest, so we knew the original owners of the nest the owls coveted. Here a hawk leaves after bringing in some branches. November seemed like an odd time of the year to be working on the nest. 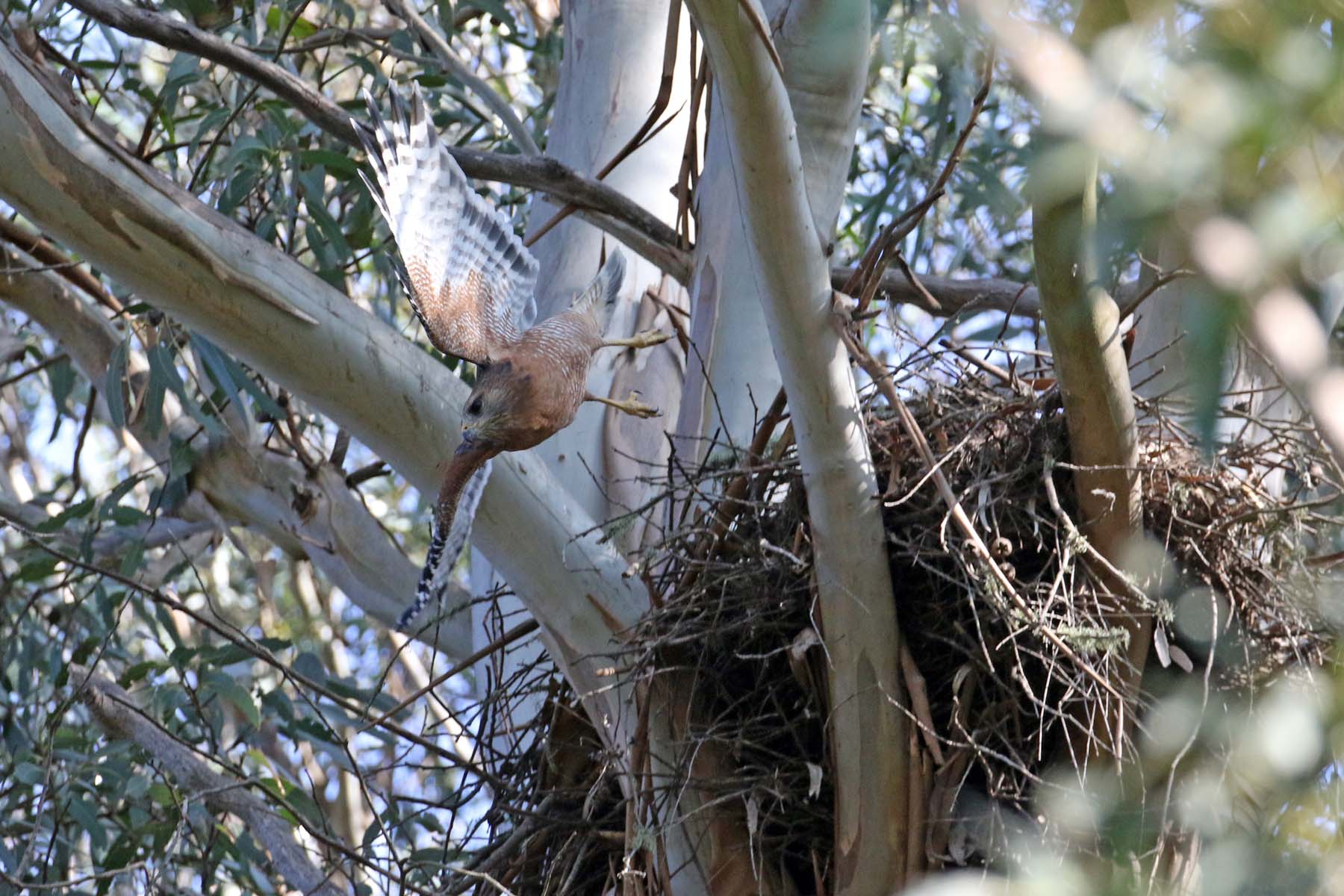 Below: When the owls came off their roost site they often went to the same large branch, sometimes hiding in the ivy but sometimes staying out in the open. The male is on the left, the female on the right. 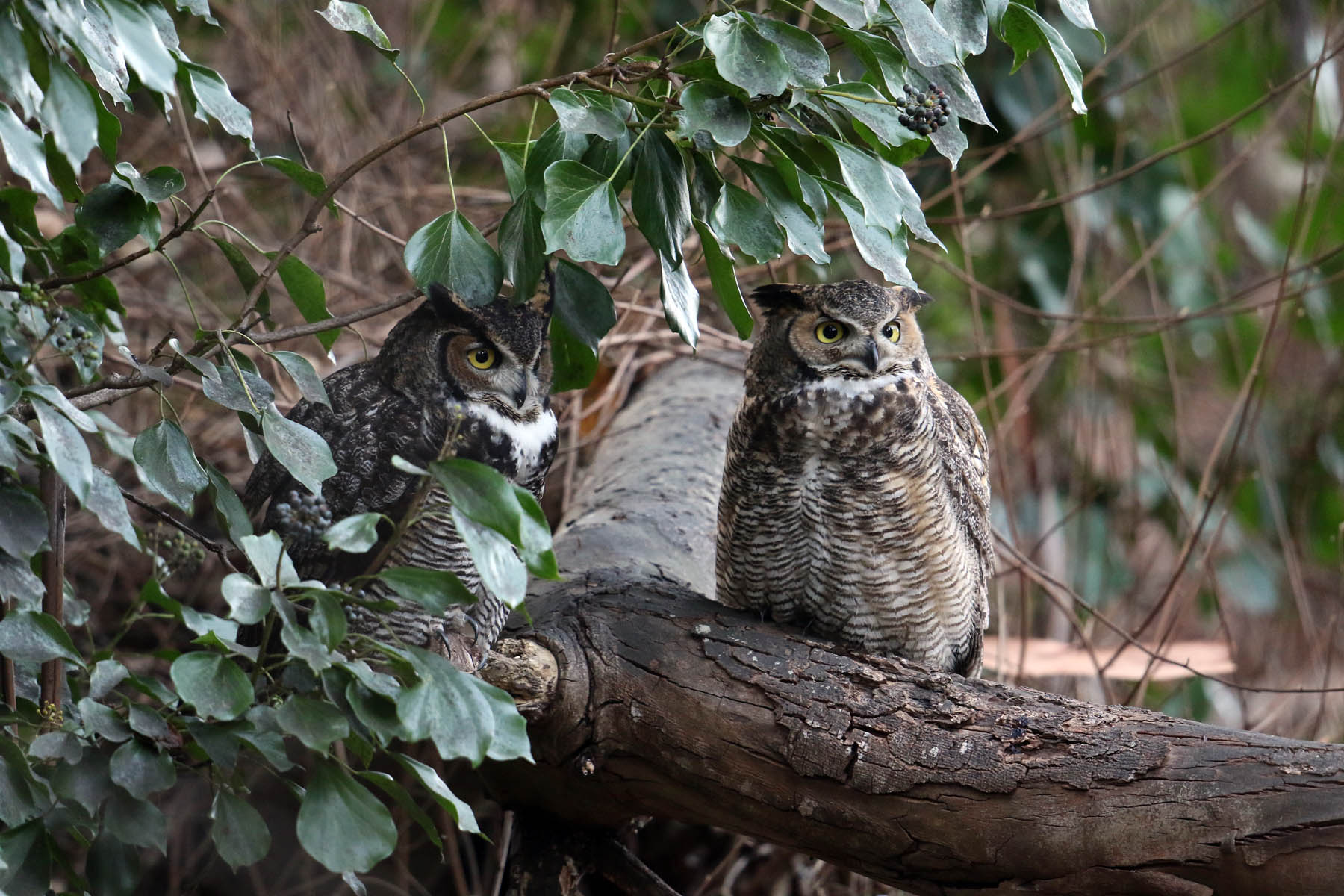 Below: This time they stayed out in the open. As with many raptors, the female (on the left) is larger than the male, but the male is a bit more colorful. 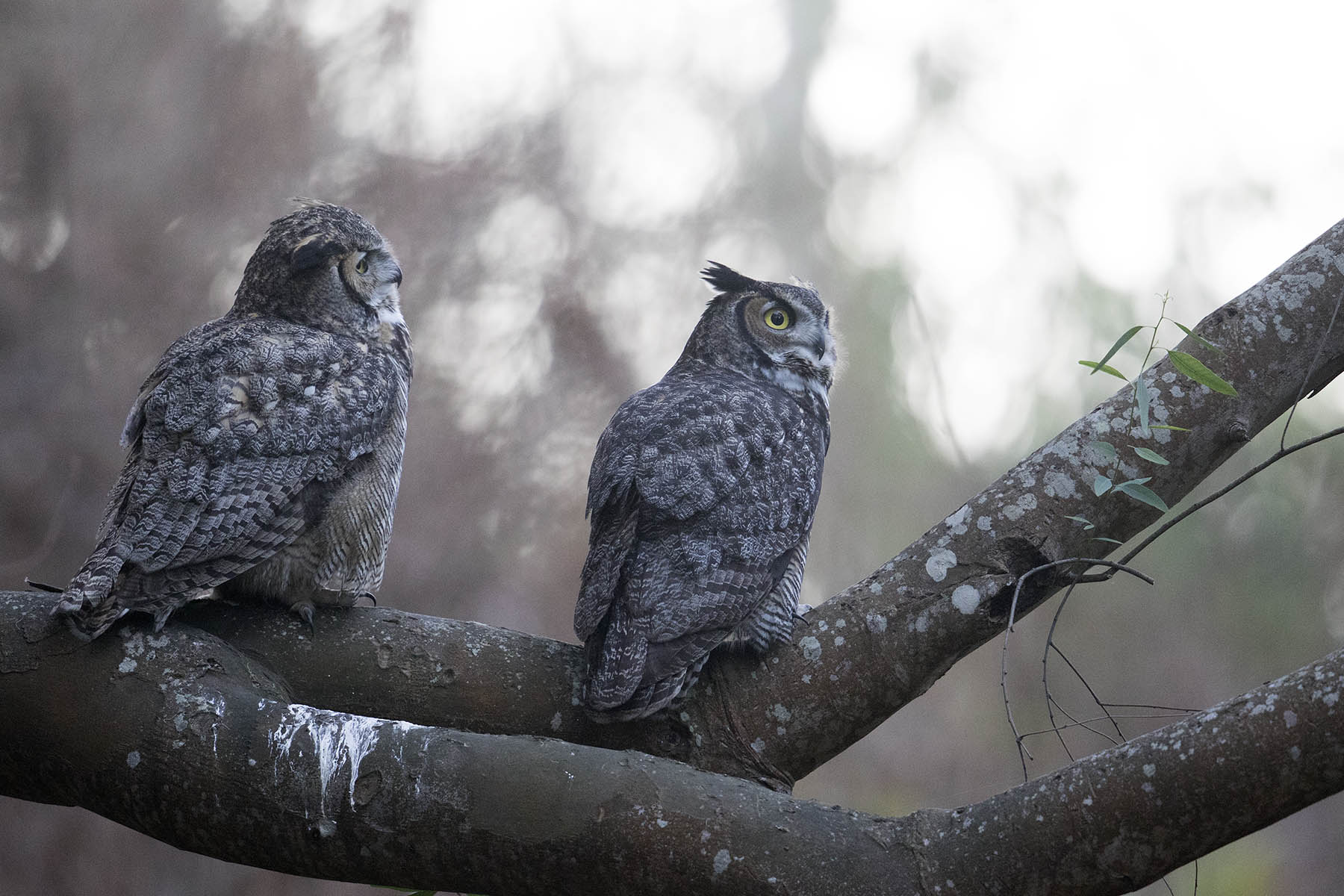 Below: Video of the female preening. Note how she cleans her talons—one wants to make sure that the weapons are maximally lethal! The audio is not great because the microphone (Rode) that I use for video does not work well (microphone adds a humming noise). Any suggestions from readers on a good microphone to use with a DSLR camera would be welcome.

Below: the male perches at eye level just a few feet off the ground. 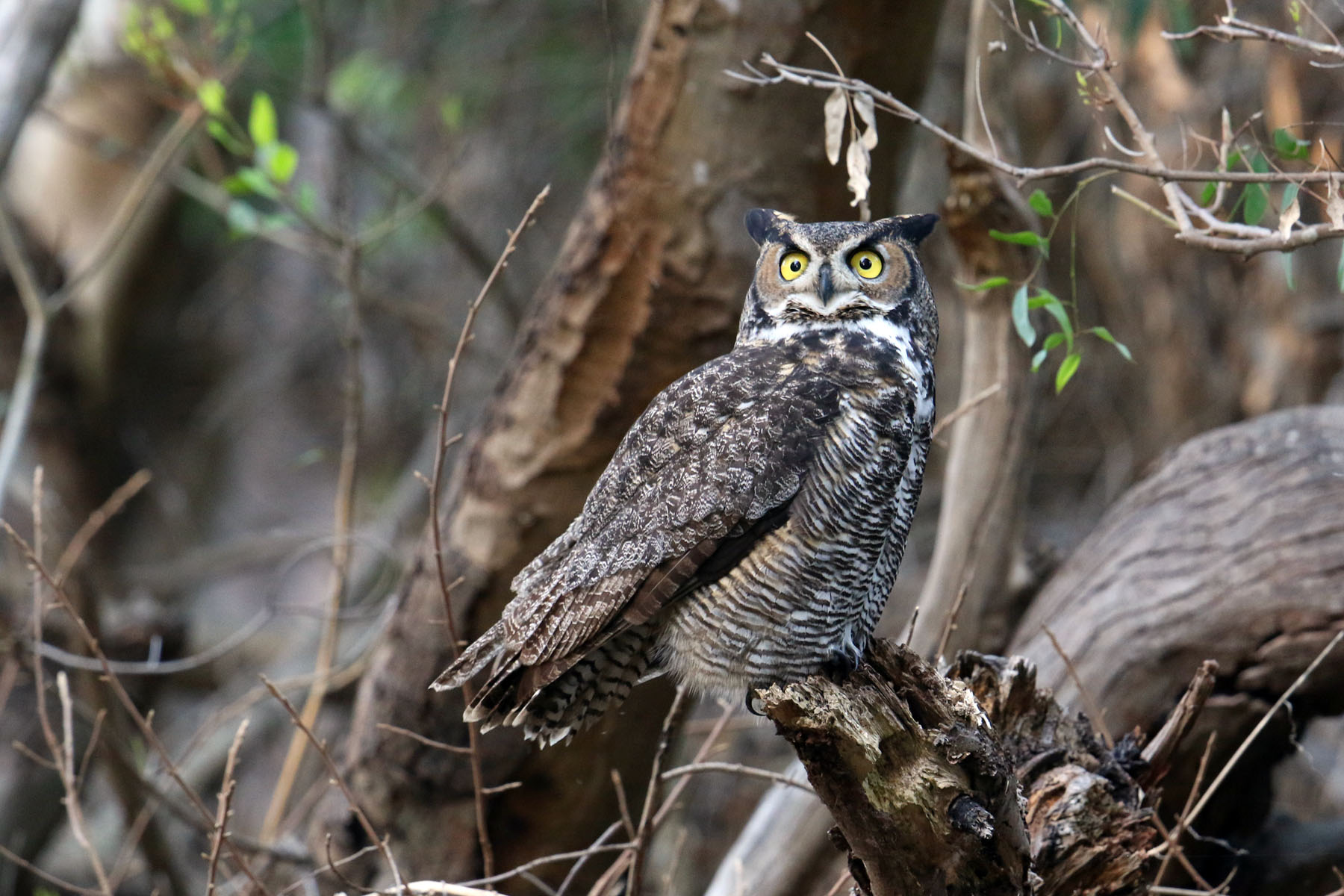 Below: Hooting male—when he hooted, his white throat puffed out. 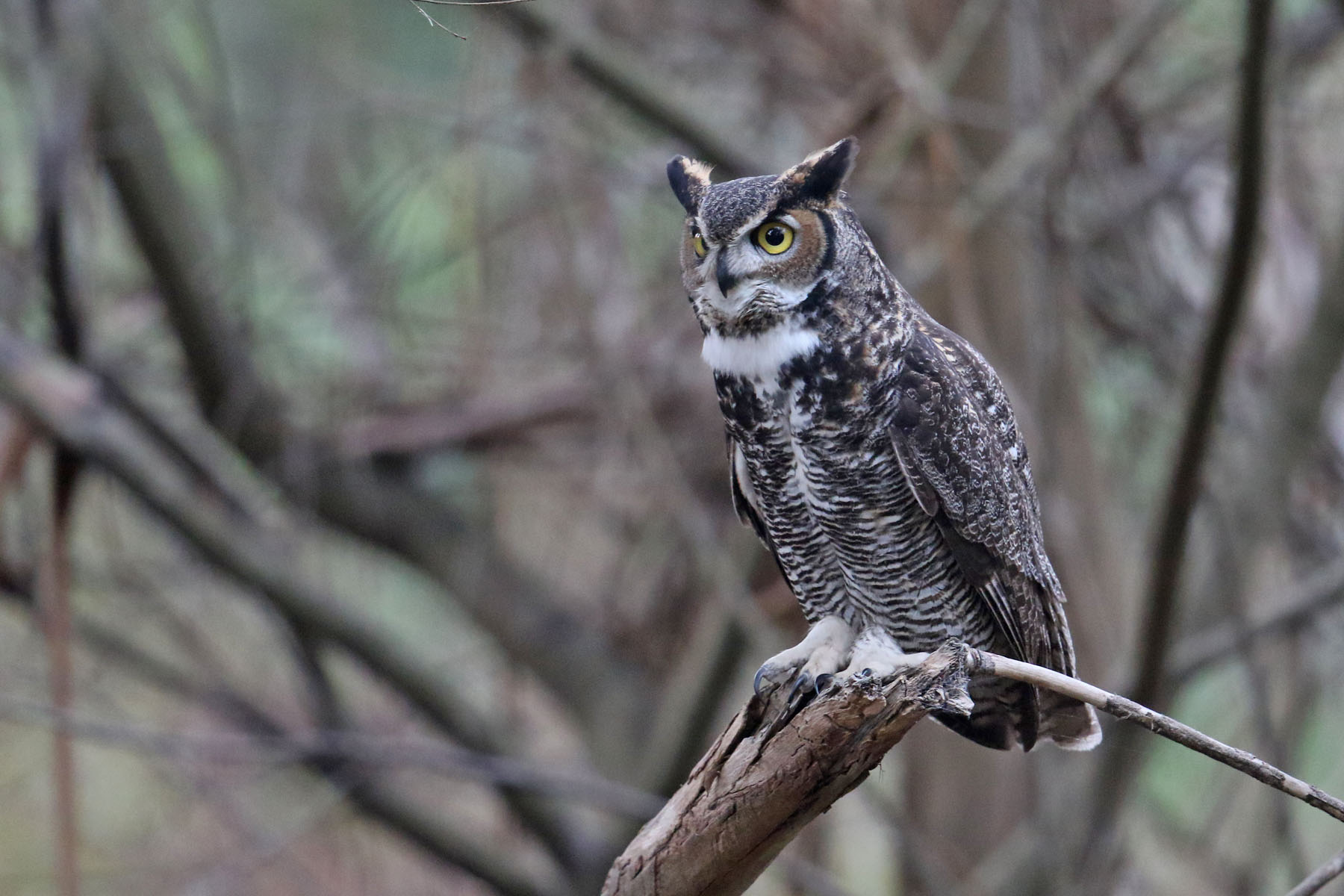 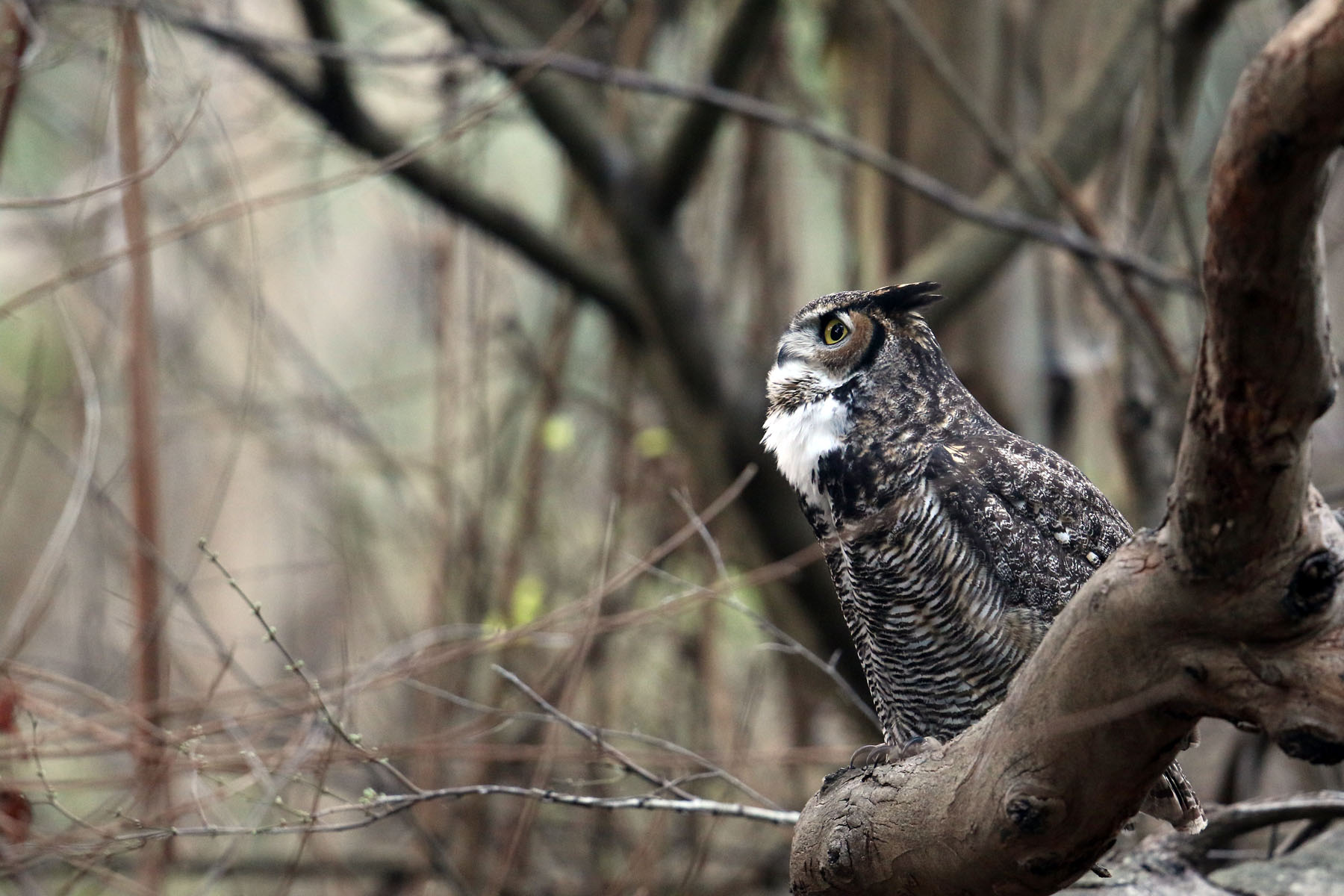 Below: The male. As Monty Python said in their famous dead parrot skit—he’s a lovely bird, lovely plumage. 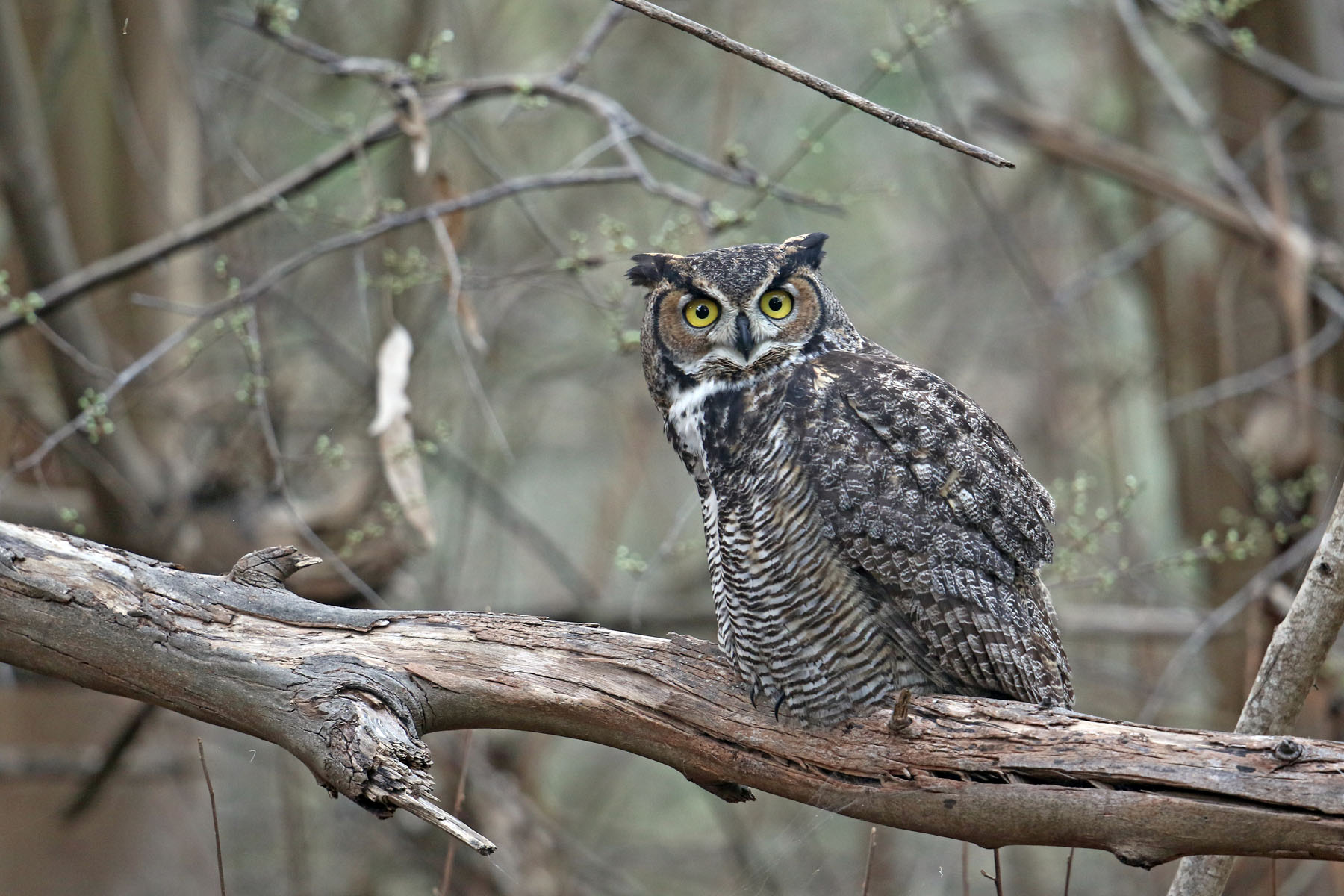 Below: Male perched on top of a snag, hooting away! 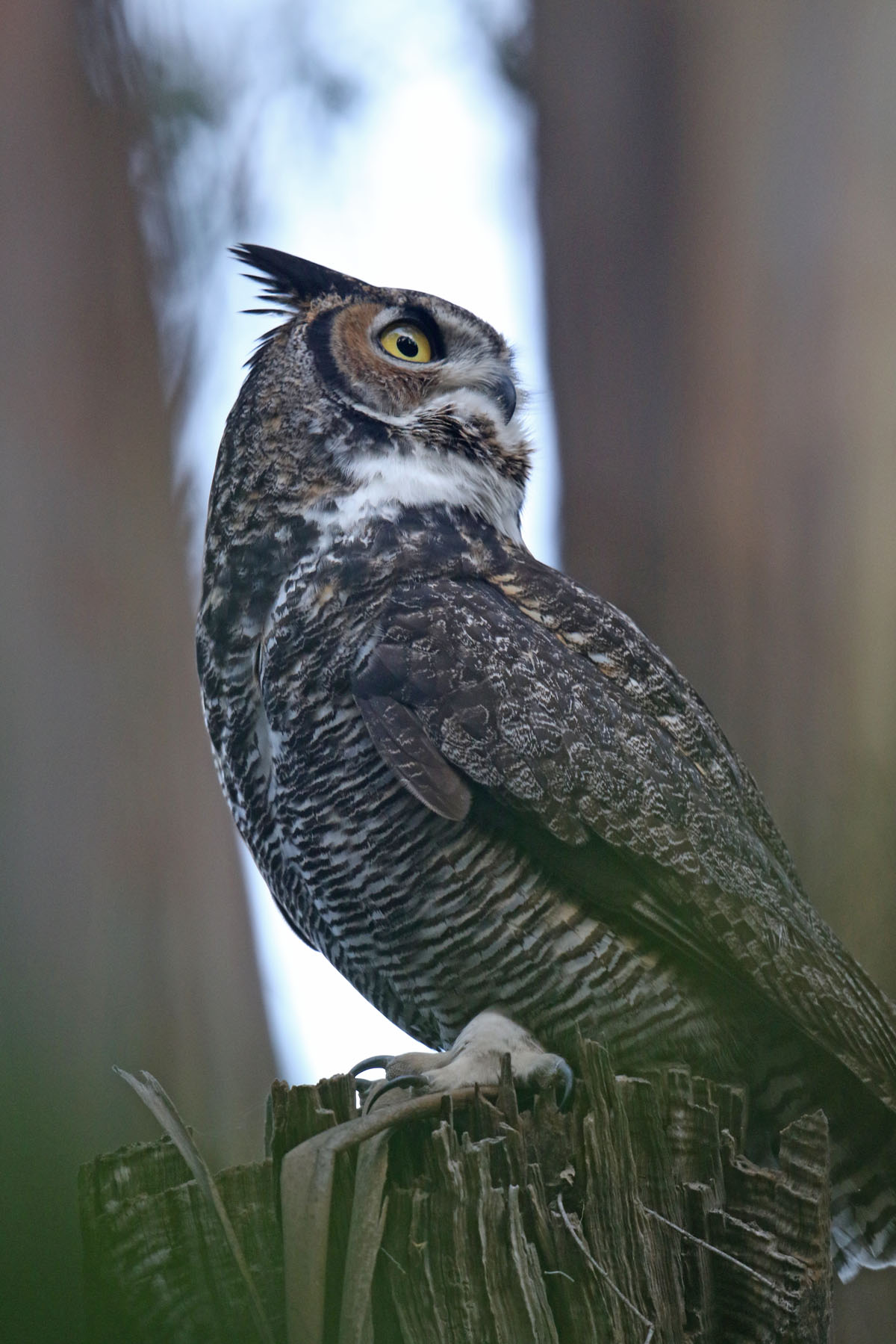