The New York Times from two days ago has an article about one of Dr. Seuss’s most famous books, The Lorax (you can see a preview of the book’s contents at the Amazon site). Here’s the article:

And the book at issue: 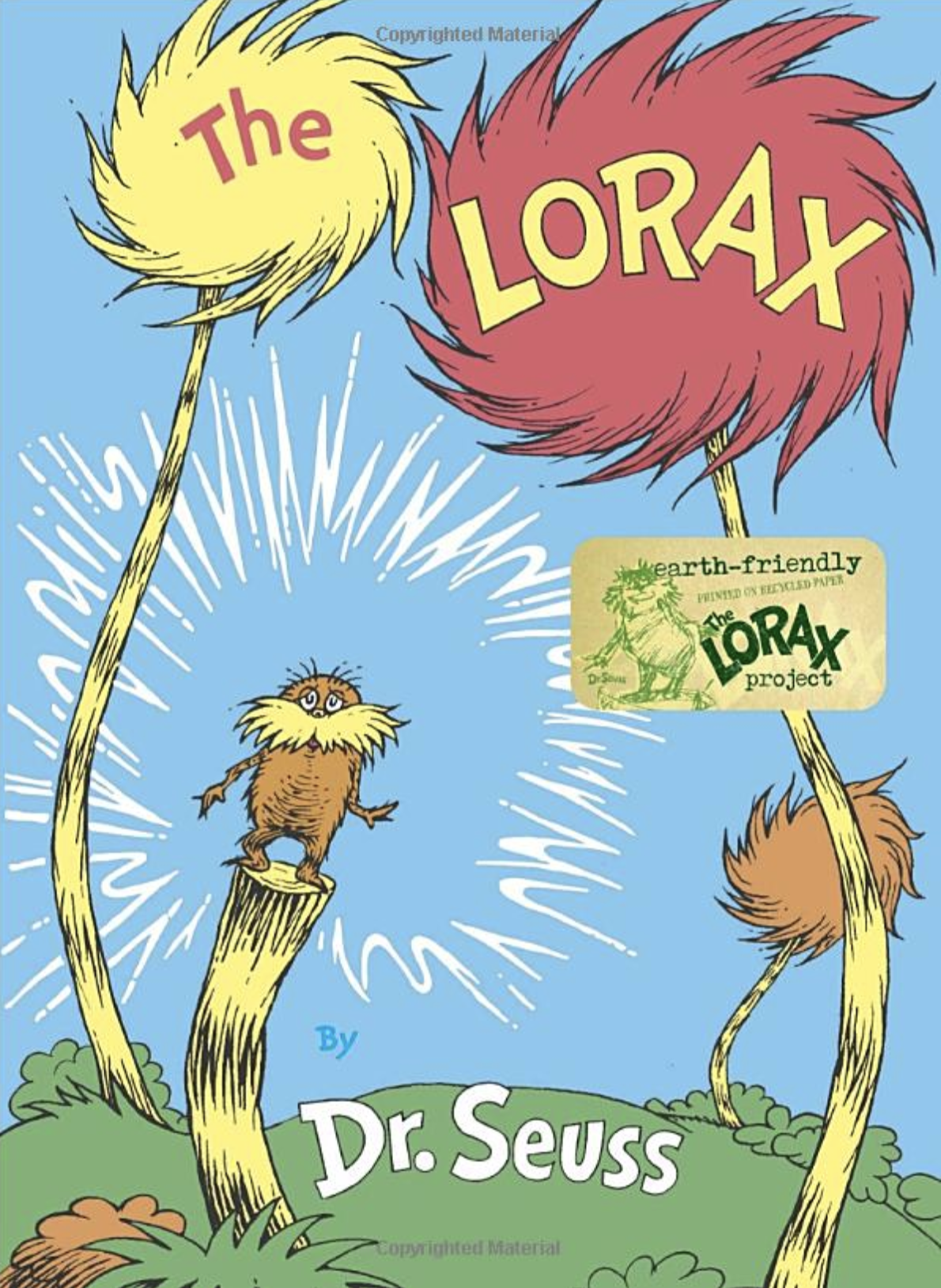 The book’s plot involves a man called the Once-ler visiting a beautiful forest of Truffula trees inhabited by the Lorax and many other species. Sensing a mercantile opportunity, the Once-ler cuts down the trees to manufacture “Thneed”, apparently a fabric used to make beautiful clothes. The Thneed factory expands, polluting the air and water, and eventually they cut down all the Truffula trees, putting themselves out of business. According to Wikipedia, the story ends like this (I haven’t read it):

Without raw materials, the factory shuts down and the Once-ler’s relatives leave. The Lorax says nothing but with one sad backward glance lifts himself into the air “by the seat of his pants” and disappears behind the smoggy clouds. Where he last stood is a small monument engraved with a single word: “UNLESS”. The Once-ler ponders the message for years, in solitude and self-imposed exile.

In the present, his buildings falling apart around him, the Once-ler at last realizes out loud what the Lorax meant: “Unless someone like you cares a whole awful lot, nothing is going to get better. It’s not.” He then gives the boy the last Truffula seed and urges him to grow a forest from it, saying that, if the trees can be protected from logging, then the Lorax and all of his friends may come back.

The Lorax was published in 1971, when the U.S. environmental movement was getting underway, with the National Environmental Policy Act passed in January, the first Earth Day celebrated in April, and the establishment of the Environmental Protection Agency in December. It was also the year that Joni Mitchell released her musical equivalent of The Lorax, the environmentalist song “Big Yellow Taxi.”

Dr. Seuss, too, was peeved as, according to the New York Times article, he was upset that a development project in San Diego proposed to cut down the eucalyptus trees around his home.

Seuss (real name: Theodore Geisel) wanted to write a children’s book about environmentalism, but got writer’s block, so his wife suggested they chill out at the Mount Kenya Safari Club, a fancy resort with plenty of animals and forest around. That lifted the block, and Seuss wrote most of The Lorax, a perennially popular book (over a million copies sold in 15 languages) in just one afternoon.

Now the book has been impugned for making The Lorax into a domineering and obnoxious sort of environmentalist (“ecopolice”), the argument being that he was the master of the forest and could decree its fate. But a new paper in Nature Ecology & Evolution (reference at bottom, free link here, free pdf here) suggests this interpretation is wrong: the Lorax was really based on two species that are part of Kenya’s ecosystem, and The Lorax simply an animal activist calling for the preservation of entire ecosystems, whose parts are interdependent. (This “reinterpetation” of the book seems to me largely a distinction without a difference, and thus not that exciting, as well as virtually untestable.)

What’s more interesting, as detailed in the paper, is that the Lorax and the Truffula trees might have been inspired by real animals and plants that Seuss saw in Kenya. The authors’ hypothesis is that the Truffula tree is the whistling thorn acacia (Acacia drepanolobium), a tree on which lives the patas monkey (Erythrocebus patas). The monkey gets over 80% of its diet from the gum and leaves of the tree, and the monkey’s depredations don’t hurt the tree. This is then an example of a commensalism: a relationship between two species in which one benefits and the other isn’t harmed. If you wipe out the tree, the monkey goes with it. (As I mention below, this is in fact happening.)

The Truffula trees do look, to the authors, like the spindly whistling thorn acacia. You can see a Truffula above, and here’s the acacia: 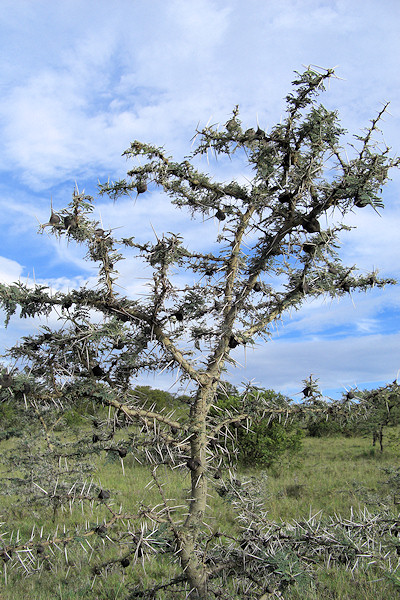 Here’s a photo of various parts of the story, including E. patas in the acacia, from the Nature paper:

But what is the lorax? The authors further suggest that the lorax was modeled on E. patas, and test this by using fancy “eigenvalue decomposition methods” to compare the Lorax’s face to that of three primates (see photo below) as well as another Seuss character that looks similar: a “control” creature in The Foot Book. They find that the Lorax clusters with two cercopithecine monkeys: the patas monkey and the blue monkey (C. mitis). The comparison:

The authors have other “evidence:”

Dates, physical similarities and probable encounters underlie our proposal that patas monkeys inspired the Lorax. His physical appearance postdates Geisel’s trip to Kenya, evolving into a short, “sort of man” with a signature moustache; his mossy pelage was blue before it was orange (Fig. 2). Many of these final traits are shared with patas monkeys and it is probable that Geisel encountered them at the Mount Kenya Safari Club (Fig. 1a). Even the voice of the Lorax (a “sawdusty sneeze”) resembles the ‘whoo-wherr’ vocalization of patas monkeys; the ‘whoo’ is a loud, wheezing expiration of air. It appears to be an alarm call issued in response to predators and human observers.

From this the author’s conclude that “Geisel drew inspiration from a ceropithecine monkey and its ecology” when writing The Lorax in Kenya. That’s possible, although the Lorax is most facially similar to the blue monkey, which is neither blue nor commensal with the acacia, but has a wider diet. If that’s the case, then the similarity between the Truffula tree and the whistling thorn acacia falls apart. The hypothesis is semi-interesting, but there’s no way to test it given the lack of verification from Seuss, and I’m not convinced by the author’s arguments that the lorax is really based on the patas monkey.

I’m even less convinced by the authors’ rewriting of the book’s interpretation, which is almost postmodern:

If this natural commensalism [between acacia and patas monkey] informs The Lorax, it challenges traditional interpretations of the Lorax as an ecopoliceman asserting his authority. If the Lorax is based on the patas monkey, he can be seen as a sustainable consumer dispossessed of his commensal partner and an equal victim of environmental degradation.

Well, yes, all this is as possible as anything else. And the authors do point out that this commensalism is endangered, as the acacia is being heavily browsed by giraffes, rhinos and elephants, and that, combined with its use as charcoal, is bringing the tree toward extinction. Likewise, the range of the patas monkey is said to have “collapsed” recently, so Seuss’s lesson, even if not drawn from this system, still applies: stop destroying ecosystems by removing an important element.

Granted, this short (three-page) paper is in the “books and arts” section of the journal, and it’s a semi-fun read, but to me doesn’t make a convincing case. And I’m not sure why Joanna Klein wrote a longish piece about the paper for The New York Times. The source of the lorax remains, at least to me, a mystery. Whether an eco-policeman or part of an endangered ecosystem, the Lorax has brought joy to children for fifty years.

23 thoughts on “What was the animal that inspired Dr. Seuss’s lorax? Biologists suggest a hypothesis”