According to several sources, including the BBC, the Manchester Evening News and The National, students at Manchester University, which is where Matthew Cobb teaches (he IS NOT TO BLAME) decided to paint over a mural that displayed a poem by Rudyard Kipling, replacing it with a poem by Maya Angelou.

The defacing was done by leaders of the student union, who apparently didn’t consult either the University or their own constituents. The BBC reports:

The protest was an attempt to reclaim history by those who have been “oppressed by the likes of Kipling for so many centuries, and continue to be to this day,” according to Sara Khan, the liberation and access officer at the student union.

In a Facebook post, the student official said Kipling’s works “sought to legitimate the British Empire’s presence in India and dehumanise people of colour”.

And here’s a statement by one of the miscreants, (a “liberation and access officer” of the student union!), explaining why they had to exercise this censorship:

Sara Khan, a liberation and access officer at the union, said students defaced Kipling’s poem as he ‘stands for the opposite of liberation, empowerment and human rights’.

“A failure to consult students during the process of adding art to the newly renovated SU building resulted in Rudyard Kipling’s work being painted on the first floor last week,” she said in a post on her Facebook profile.

“We, as an exec team, believe that Kipling stands for the opposite of liberation, empowerment, and human rights – the things that we, as an SU, stand for.

“Well-known as author of the racist poem “The White Man’s Burden”, and a plethora of other work that sought to legitimate the British Empire’s presence in India and de-humanise people of colour, it is deeply inappropriate to promote the work of Kipling in our SU, which is named after prominent South African anti-Apartheid activist, Steve Biko.

“As a statement on the reclamation of history by those who have been oppressed by the likes of Kipling for so many centuries, and continue to be to this day, we replaced his words with those of the legendary Maya Angelou, a black female poet and civil rights activist.”

A proud student showing the poster before (right) and after (left). Note the cat-ate-the-canary expression on the her face. To me it says, “Look how virtuous I am!” 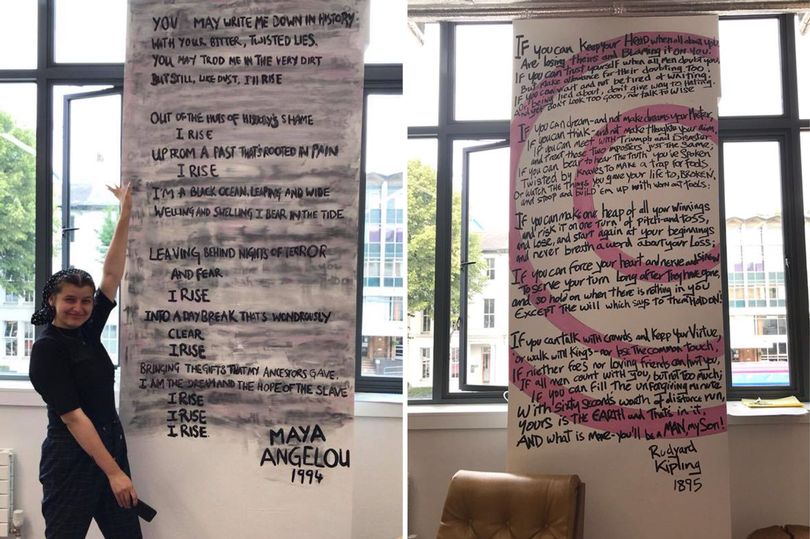 Now everything is wrong about this: the tactics, the motivation, and the poem they chose to censor. Tactically, they needed permission from both the University and the Student Union members to do this. They didn’t get either, but acted on their own. The motivation is that a bunch of spoiled and entitled brats decided that any work by a long-dead person who was in favor of colonialism, and saw whites as superior (I don’t know how much of the latter is true of Kipling), deserved to have every one of his works despoiled and effaced.

Now one would be hard pressed to find a nineteenth-century Brit who didn’t harbor some strains of colonialism and/or racism. The moral improvement of society that attenuated these beliefs started later. The same oppressive attitudes were by men towards women, and by nearly everyone toward gays. To find an author of that period who can be seen as morally pure by the lights of the Regressive Left would be nearly impossible.

Further, there was simply no debate whether artists holding views considered inappropriate today deserved to have all of their work censored and painted over. After all, the poem was not a racist one (I put it below): it’s clear it was simply posted as a kind of inspiration for students. There might have been more justification for painting over Kipling’s 1899 poem, “The White Man’s Burden“—a call for the U.S. to dominate the Philippines—but few people in their right minds would post that poem today as any form of public approbation. (It could justifiably be taught as a historical relic.)

At any rate, the poem the students painted over was “If”, and it might be familiar:

If you can keep your head when all about you
Are losing theirs and blaming it on you,
If you can trust yourself when all men doubt you,
But make allowance for their doubting too;
If you can wait and not be tired by waiting,
Or being lied about, don’t deal in lies,
Or being hated, don’t give way to hating,
And yet don’t look too good, nor talk too wise:
If you can dream—and not make dreams your master;
If you can think—and not make thoughts your aim;
If you can meet with Triumph and Disaster
And treat those two impostors just the same;
If you can bear to hear the truth you’ve spoken
Twisted by knaves to make a trap for fools,
Or watch the things you gave your life to, broken,
And stoop and build ’em up with worn-out tools:
If you can make one heap of all your winnings
And risk it on one turn of pitch-and-toss,
And lose, and start again at your beginnings
And never breathe a word about your loss;
If you can force your heart and nerve and sinew
To serve your turn long after they are gone,
And so hold on when there is nothing in you
Except the Will which says to them: ‘Hold on!’
If you can talk with crowds and keep your virtue,
Or walk with Kings—nor lose the common touch,
If neither foes nor loving friends can hurt you,
If all men count with you, but none too much;
If you can fill the unforgiving minute
With sixty seconds’ worth of distance run,
Yours is the Earth and everything that’s in it,
And—which is more—you’ll be a Man, my son!

We should call out these students, and this behavior, for what they are: the actions of benighted social justice warriors who think that they have not only the key to the truth, but the absolute right to rewrite history. Shades of Soviet Russia! And what should be censored next: the “Just So Stories” of Kipling, the Declaration of Independence (drafted by a slaveholder), and all the speeches of Winston Churchill (a colonialist)? The view that we should write out of history anyone in the past who expressed views that we find repugnant today is one of the most odious and censorious strains of Control Leftism.

But there are those who agree with the censors; here’s one of them, Titania McGrath, who identifies herself as “Activist. Healer. Radical intersectionist poet.” (It has not escaped my notice that she might be a troll. But satire and social-justice warriorism are hard to tell apart.)

Another of her views: