Good morning on a temperate Wednesday, June 20, 2018: National Vanilla Milkshake Day (eccch!) as well as World Refugee Day. We’re in a for a coolish and rainy week in Chicago—good weather for ducks!

First, watch what the latest immigration news did to Rachel Maddow (h/t: Matthew):

Extraordinary stuff. When the news does this to an anchor… pic.twitter.com/YUledbgcYP

Not a lot of things happened on this day in history; do events slow down in the Northern Hemisphere’s summer?  On this day in 1756, a group of British soldiers, Anglo-Indian soldiers, and Indian non-combatants was imprisoned in the Black Hole of Calcutta. About 65 went in, and about 23 survived the one night in stifling, cramped, waterless quarters.  On this day in 1840, Samuel Morse was given a patent for his telegraph.  On June 20, 1944, the Nazi’s MW 18014 V-2 rocket attained an altitude of 176 km, technically becoming the first man-made object to reach outer space. Ironically, exactly one year later the U.S. State Department approved the transfer of Nazi rocket scientists, including Wernher von Braun, to the U.S.—to help us build rockets!  On June 20, 1972, the famous 18.5-minute gap appeared in White House tape recordings between President Nixon and his aides. The crooks were discussing Watergate, and the gap was fobbed off as a mistake of Nixon’s secretary Rose Mary Woods, who said she hit the “record” button while transcribing the tapes, accidentally erasing the segment.  Finally, on June 20, 1975—43 years ago—the movie “Jaws” was released in the U.S.; as Wikipedia claims, it became “the highest-grossing film of that time and start[ed] the trend of films known as ‘summer blockbusters’“.

A tweet for a musical genius who’s had a rough life:

The sound of genius. Happy birthday to Brian Wilson. https://t.co/kKoreUUtHv

Cyrus: Everything we know indicates that…
Hili: That we know too little. 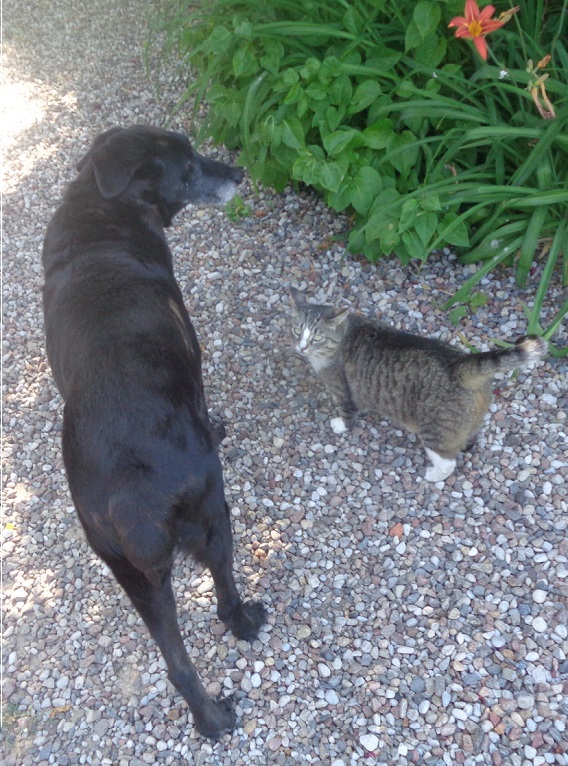 My friend’s mum was at the animal welfare league and apparently there's a cat that lives in the ceiling pic.twitter.com/jLl84ahuZX

Remember, he’s watching you and everything you do!

Tweets from Matthew: this first one shows a moving rainshower:

Timelapse of a cloudburst over Lake Millstatt in Carinthia, Austria by photographer Peter Maier. Thank you internet pic.twitter.com/w3DDGlipb5

This cat wants only love (NOT!):

From the writer and scientist Adam Rutherford (note to Adam: start wearing other colors? Are you a hipster?)

Issues with dressing almost exclusively in black and being butler to an all black cat pic.twitter.com/6omQk3Ku0R

Another photo from Matthew when he was in Zermatt: sunrise on the Matterhorn:

Matterhorn in the morning pic.twitter.com/7A15AOm6pR

This is real; click and read the article. You will lose what remaining faith you have in humanity.

Editor: “you wrote this weird, half the story is a single quote.”

Reporter: [long drag on a Marlboro] “Trust me.” pic.twitter.com/d7ctcVX4GE

A tweet from a First Lady retweeted by another First Lady. Mr. Trump, TEAR DOWN THAT POLICY!

I live in a border state. I appreciate the need to enforce and protect our international boundaries, but this zero-tolerance policy is cruel. It is immoral. And it breaks my heart.https://t.co/he1uw1E96A

And if you still have any faith in humanity left, have a gander at this.

. . . but you can still have faith in cats being cats!

My cats stare down at me, mocking me whilst I clean up the mess they’ve made.

The thread that follows this tweet is very good; have a look (the official pundit now is a deaf white cat named Achilles).

Ruth's Official List of Animals Who Have Never Been Hired As #WorldCup Pundits, But Who'd Do An Excellent Job If Just Given The Chance