For years the Freedom from Religion Foundation (FFRF) has been fighting a no-brainer legal battle against the U.S. government, which by law makes all ministers’ housing allowances completely tax-exempt. This means that if a minister is given, say, $10,000 per year by his church to subsidize housing, that money is completely tax free. It is, in effect, a gift.

This is unique for religious organizations and doesn’t apply to nonprofits like the FFRF or charitable organizations.  It’s also patently unconstitutional because it privileges religion over non-religion. The FFRF, or any nonprofit atheist organization, may give housing allowances to its employees or heads, but those are taxable. (According to FFRF lawyer Andrew Seidel’s description of the case on Patheos’s Freethought Now! website, the exemption is for “ministers of the gospel.” I suppose that means all pastors, rabbis, imams, and the like, but only Christians really preach the gospel!”) Annie Laurie Gaylor and Dan Barker, married co-Presidents of the FFRF, also get a housing allowance, but must pay taxes on it.

As the FFRF notes in an email bulletin, it’s not just the cost of housing (rent or mortgage) that is subsidized:

Clergy are permitted to use the housing allowance not just for rent or mortgage, but also for home improvements, including maintenance, home improvements and repairs, dishwashers, cable TV and phone fees, paint, towels, bedding, home décor, even personal computers and bank fees. They may be exempt from taxable income up to the fair market rental value of their home, particularly helping well-heeled pastors. The subsidy extends to churches, which can pay clergy less, as tax-free salaries go further.

This tax break given to ministers costs the government (i.e., the taxpayers) about $700 million per year! There is no rationale for keeping it unless similar exemptions are given to people, regardless of religion, in similar situations, i.e. nonprofit organizations. And the FFRF’s efforts to overturn a palpably illegal law have been stymied by the government over technicalities.

An original suit filed in 2011 was victorious; Judge Barbara Crabb for the Western District of Wisconsin ruled in 2013 (here) that the religious exemption violated the Establishment Clause (the First Amendment) by privileging religion. This was a major victory for the FFRF—and for secularism. It was also a shock to the government, and to the many churches and ministers who benefit from this illegal arrangement.

The government appealed. They won in 2014, but only on a technicality. The three judges on the Seventh Circuit court of appeals ruled (decision here) that the plaintiffs lacked the “standing” (legal requirement) to sue. That was because Gaylor and Barker had never asked the Internal Revenue Service for a refund of their taxes on the housing allowance. This was a way for the government to dismiss the case without having to face the First Amendment issues involved. 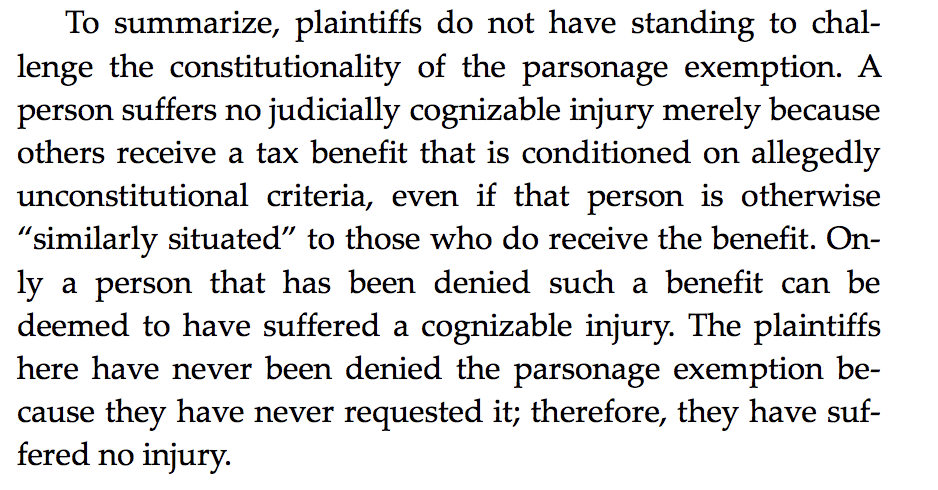 With standing, the plaintiffs went back to court. And they won in October of last year. And once again the government, determined to privilege religion, appealed to the Federal District Court of Appeals. Yesterday the FFRF filed yet another brief before the Seventh Circuit Court of Appeals (Annie Laurie Gaylor et al. v. Stephen Mnuchin [Treasury Secretary] et al., pdf here). As an email I got from the FFRF noted:

The 7th Circuit threw FFRF’s original suit out on standing, arguing that Barker and Gaylor hadn’t gone through the motions of asking for a refund of their housing allowance from the IRS. Accordingly, they sought the refunds, and when denied refunds for the year 2012, went back to court.

Also named as a plaintiff is Ian Gaylor, representing the estate of FFRF President Emerita Anne Nicol Gaylor, who died in 2015 but whose retirement was paid in part as a housing allowance she was not allowed to claim in her lifetime.

As FFRF’s brief puts it, “Only ministers can exclude cash housing allowances, a result that is patently unfair.” Even the bible, the brief cryptically notes, commands citizens to “render unto Caesar the things which are Caesar’s.” The government “ignores basic principles of neutrality and fairness when it comes to clergy taxation,” charges FFRF.

The brief takes digs at the numerous friends of the court briefs filed against FFRF, representing outraged ministers and denominations as varied as Unitarian Universalists, Jewish, Muslim, mainstream Protestant and evangelical Christian groups, and some 8,000 individuals. “The silence of the amici is particularly noteworthy as none even suggests that expanding the cash housing allowance exemption to non-clergy might be fair. They confirm the value of the exemption, while seeking to confine it to themselves,” contends the brief.

As Andrew Seidel notes in his Patheos post, the government’s brief consists largely of a list of religious organizations favoring the exemption, so their argument is basically not a Constitutional one, but simply “a lot of us do it and want that tax break.” If the courts are really determined to keep the ministerial privilege, they’ll have to do some fast tap-dancing this time. And of course if the government loses, they can keep appealing—all the way up to the Supreme Court.  Yet the tax break is really so palpably unconstitutional that I can’t imagine what the courts could do to keep it, unless they give similar tax breaks to atheist nonprofit organizations or any comparable nonprofit.

If you want links to the judicial history of the case, here are some:

Dan and Annie Laurie (and the whole apparatus of the FFRF) are formidable and tenacious foes, and of course I hope they win. Here they are with their new brief: 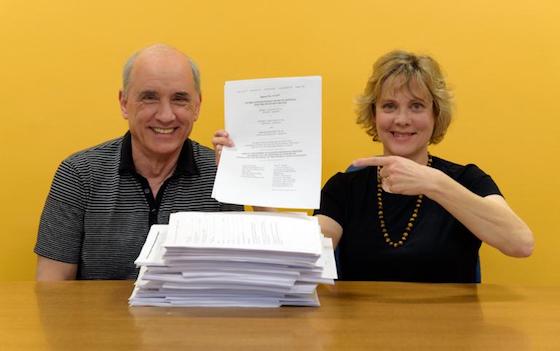 I’m a member of the FFRF (it’s only $40 a year, and you get a cool and long monthly newspaper), and am also on the honorary board of directors. If you can spare $40, I’d urge you to throw it their way, as they use the money to actually get stuff done—and to keep this country secular, the way its Founders intended.