Okay, the SJWs have won, and there’s no reason to live any more.  When I saw this tweet below, I thought it was a huge joke:

There's big talk about inclusion and diversity at Google so if you need any evidence of Google is making this priority may I direct your attention to the 🥗 emoji— we've removed the egg in Android P beta 2, making this a more inclusive vegan salad. pic.twitter.com/kzHY0A9ZjG

But no—no it isn’t a joke. It’s a serious attempt to promote “inclusion and diversity”. The Tweeter, Jennifer Daniel, is, as the Independent reports, ” a UX manager for Google emoji”. The report continues:

The latest Google emoji update for Android users includes a slight alteration to the salad emoji, which will see the eggs removed so that it’s suitable for vegans.

This change has come about in an effort to promote inclusivity among the plethora of smartphone users.

“There’s big talk about inclusion and diversity at Google,” Jennifer Daniel, a UX manager for Google emoji stated on Twitter.

She went on to explain that the updated emoji actually corresponds more accurately with its original description.

“Hello carnivores, vegans and everyone in between!” she wrote.

. . . Just want to clarify that the goal of salad emoji redesign was to create an image more faithful to unicode’s description.

“‘A bowl of healthy salad, containing lettuce, tomato, and other salad items such as cucumber.’ Bon appetite! [sic]”

While Google may have taken the step to consider the vegan community when updating its emojis, there are a number of emojis still available for Android and iOS users that haven’t followed suit when perhaps they could have.

The pizza emoji on Android and iOS depicts a slice with a topping of pepperoni, something which would undoubtedly not appeal to vegetarians.

The Google emoji for a “shallow pan of food” contains both prawns and mussels, despite the description mentioning neither, with the iOS version including a meat drumstick.

Furthermore, eggs are clearly visible in the Bento Box featured on the Google emoji list.

Hypocrites! Pepperoni on a pizza? Indeed—here it is (click on screenshot to go to the whole list of emojis. And there is NO vegetarian pizza—not just on Android and iOS, but on any platform!

Here’s the bento box for Apple: 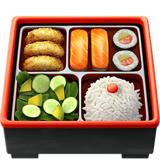 Well, what I’ve learned today is how insane the world is, at least where human behavior is concerned. Right now I need to get some respite from the madness by communing with my ducks. Ducks aren’t interested in policing the behavior of other ducks, except when it comes to protecting their offspring.

58 thoughts on “Diversity in salads at Google”