Yesterday was Eat Cheese in the Park Day, with vague plans of ingesting a falafal sandwich in the Marais sometime thereafter. A visit to the lovely area of Le Marais, home of the falafel in Paris, did occur, but the copious pre-ingestion of cheese prevented further meals.

A morning walk revealed the finals of La Fête du Pain Paris (Festival of Bread of Paris) in a huge tent right outside the cathedral of Notre-Dame. This multiday festival, which involved the best bakers in the city making bread on the spot using moveable ovens, culminated yesterday in the award of the best baguette in the city. The winner was the son of a Tunisian immigrant, Mahmoud M’seddi, who, along with the award, has the privilege of being the sole supplier of baguettes to the headquarters of the French Presidency. 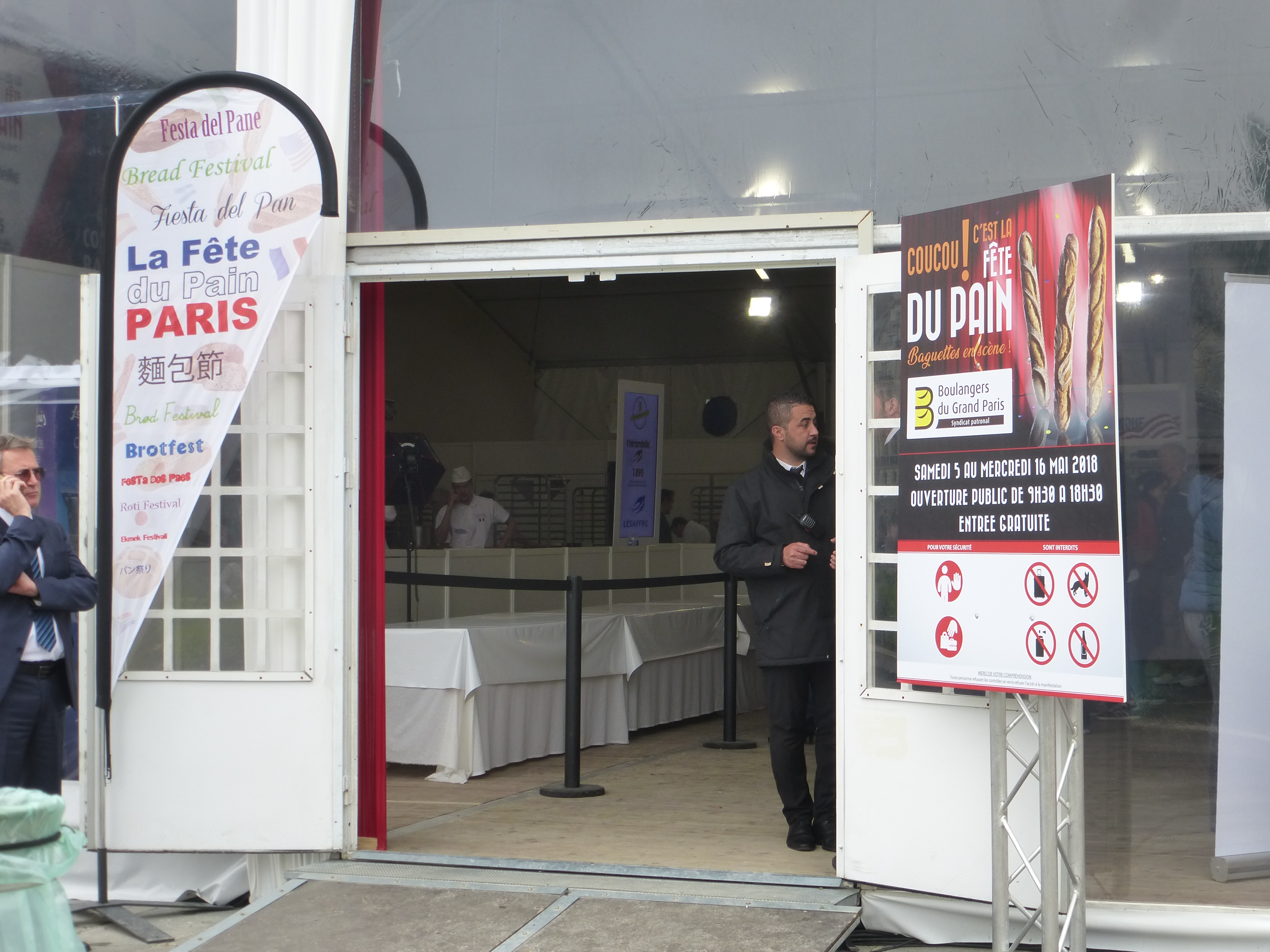 Here is part of the contest: 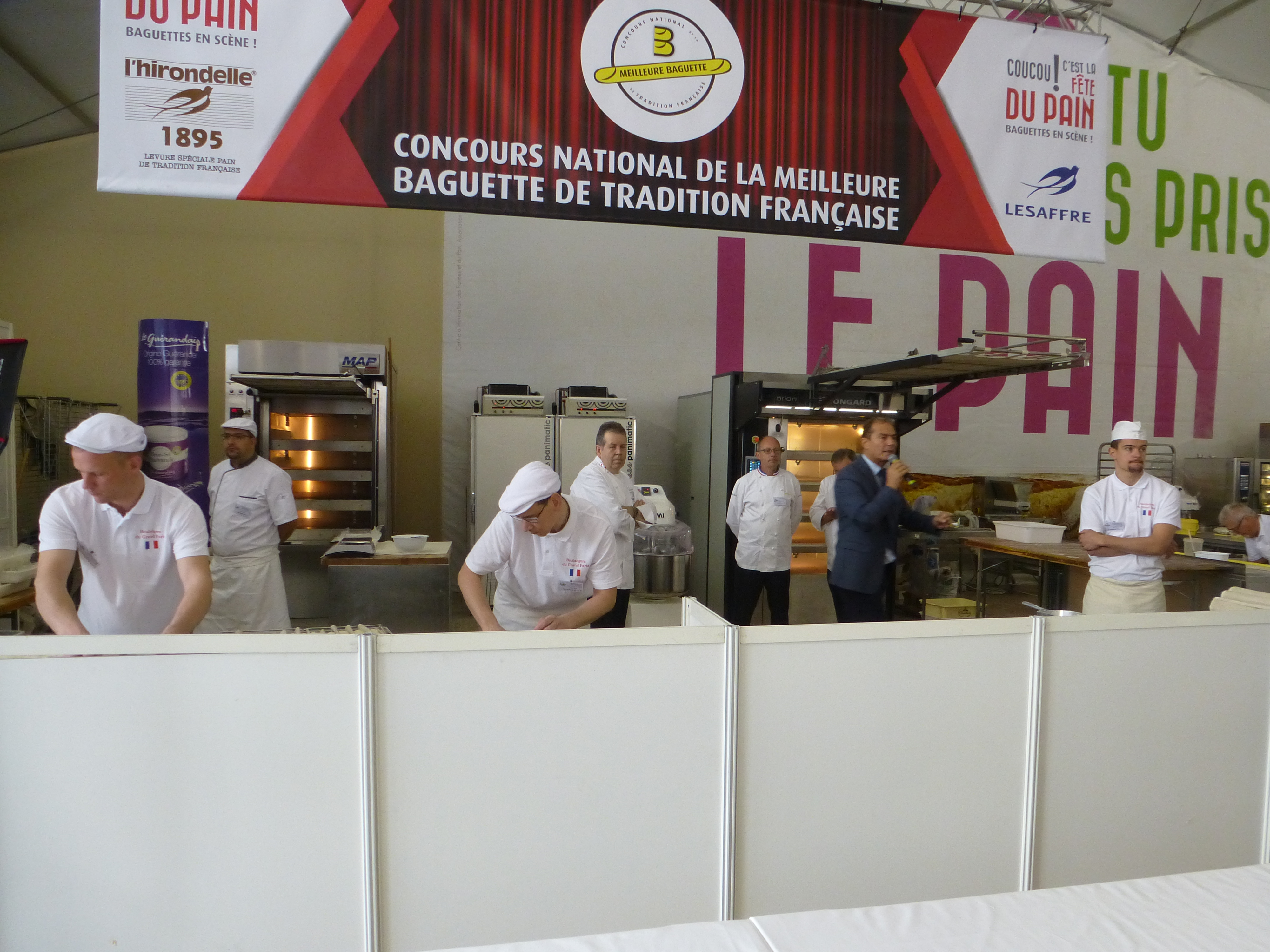 And today’s New York Times article about the winner (click on the screenshot to read it):

Groups of school children visited the tent, many getting a chance to be Baker for a Day, making their own breads and having them baked in an oven: 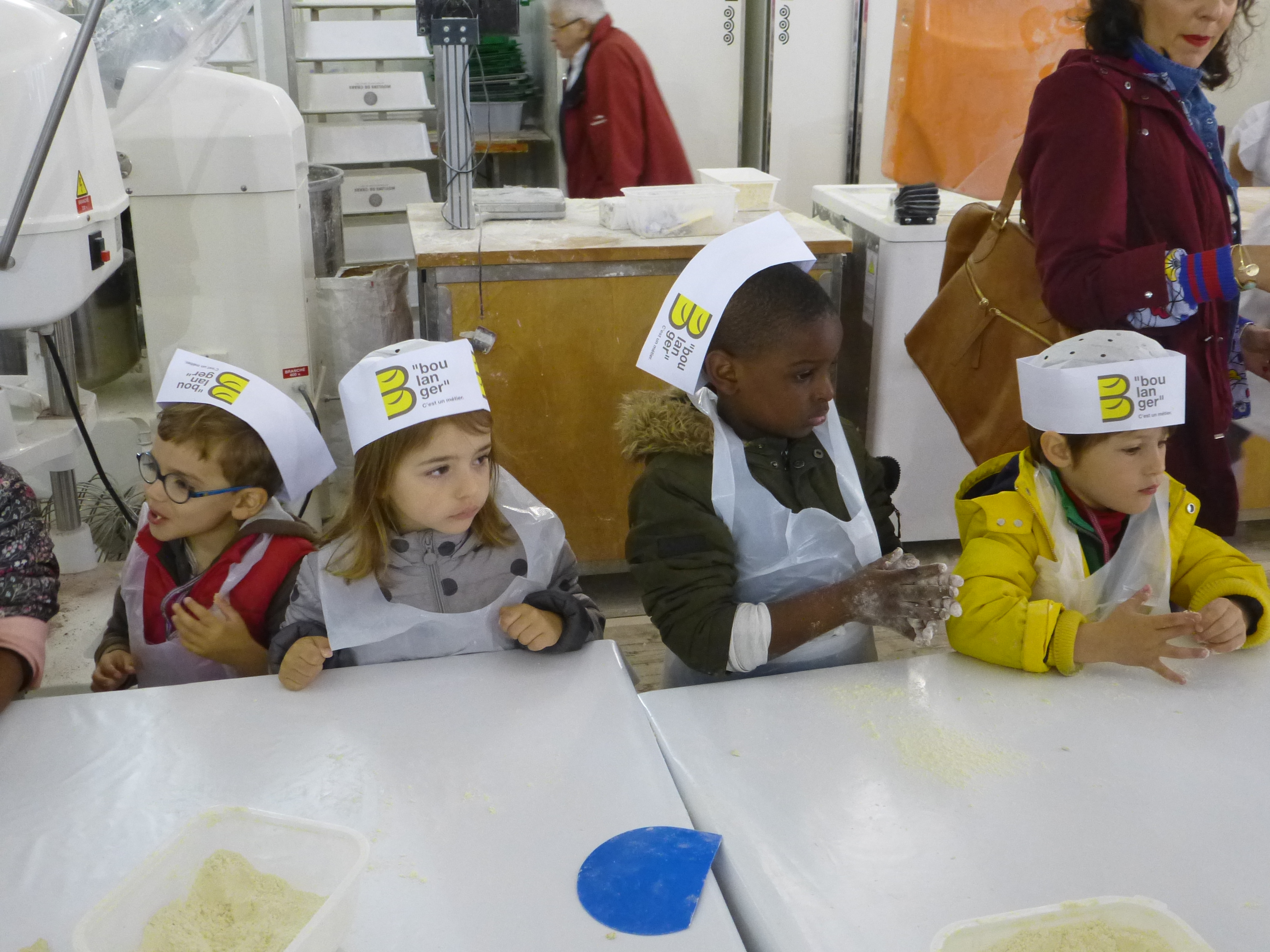 And so to the Rue Cler Market, where resides my favorite cheese shop in Paris, Marie-Anne Cantin, which sells dozens and dozens of different types of cheese, all perfectly matured in their cellar. Here are three of the four displays: two inside the store and one in the window (I’m not showing the counter with butter and fromage frais). I wish I could convey the aroma of this store in a post! 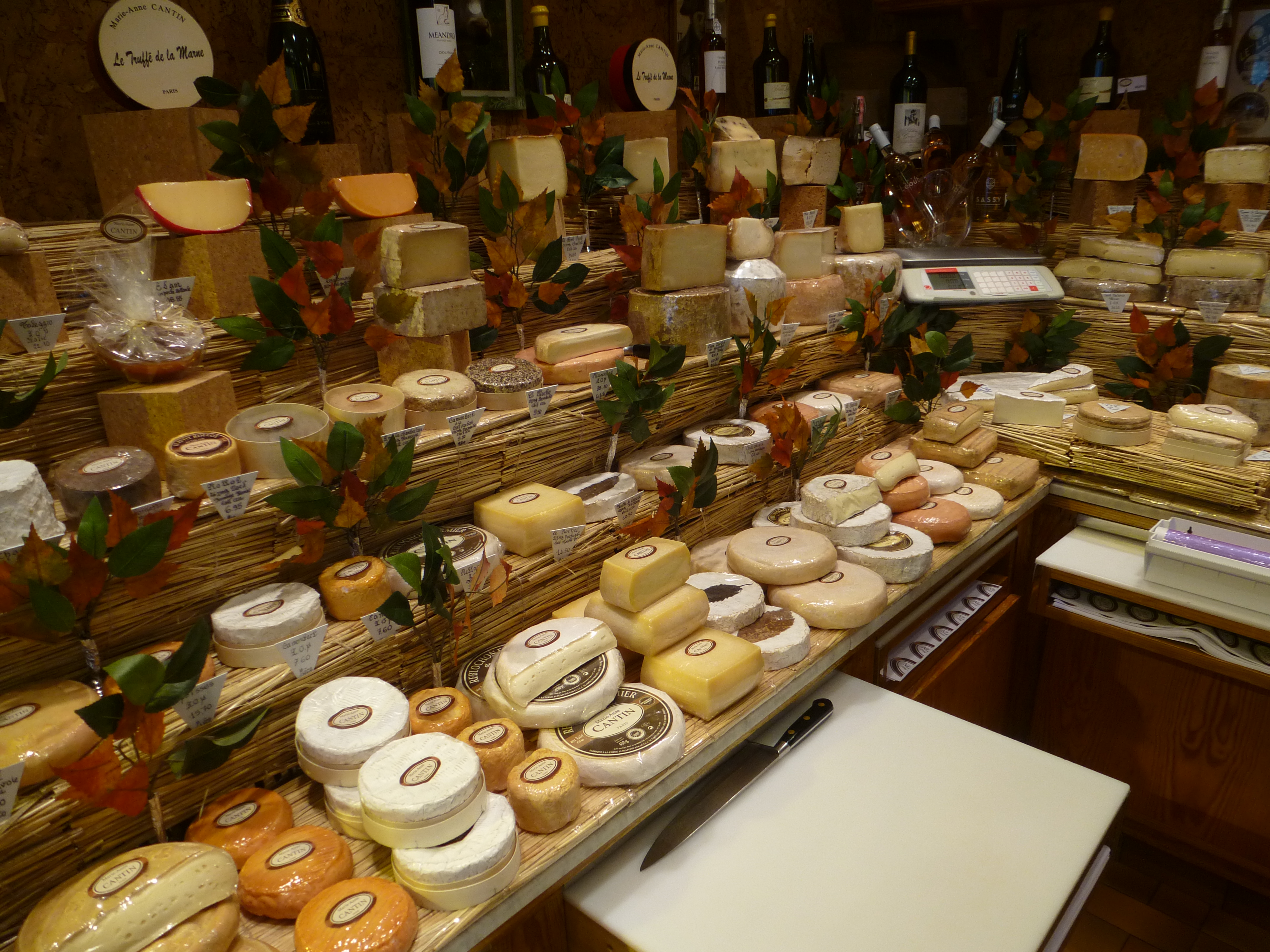 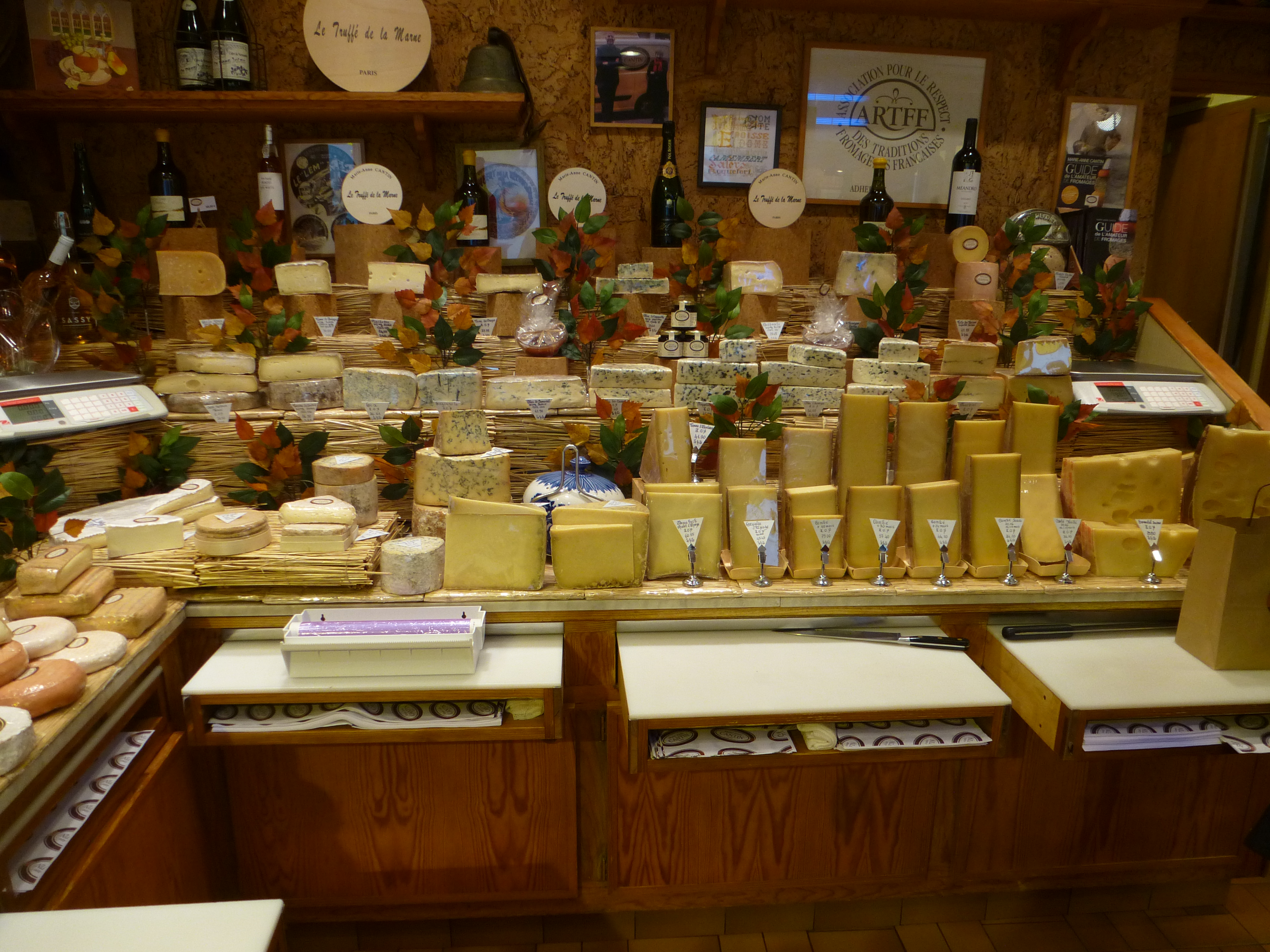 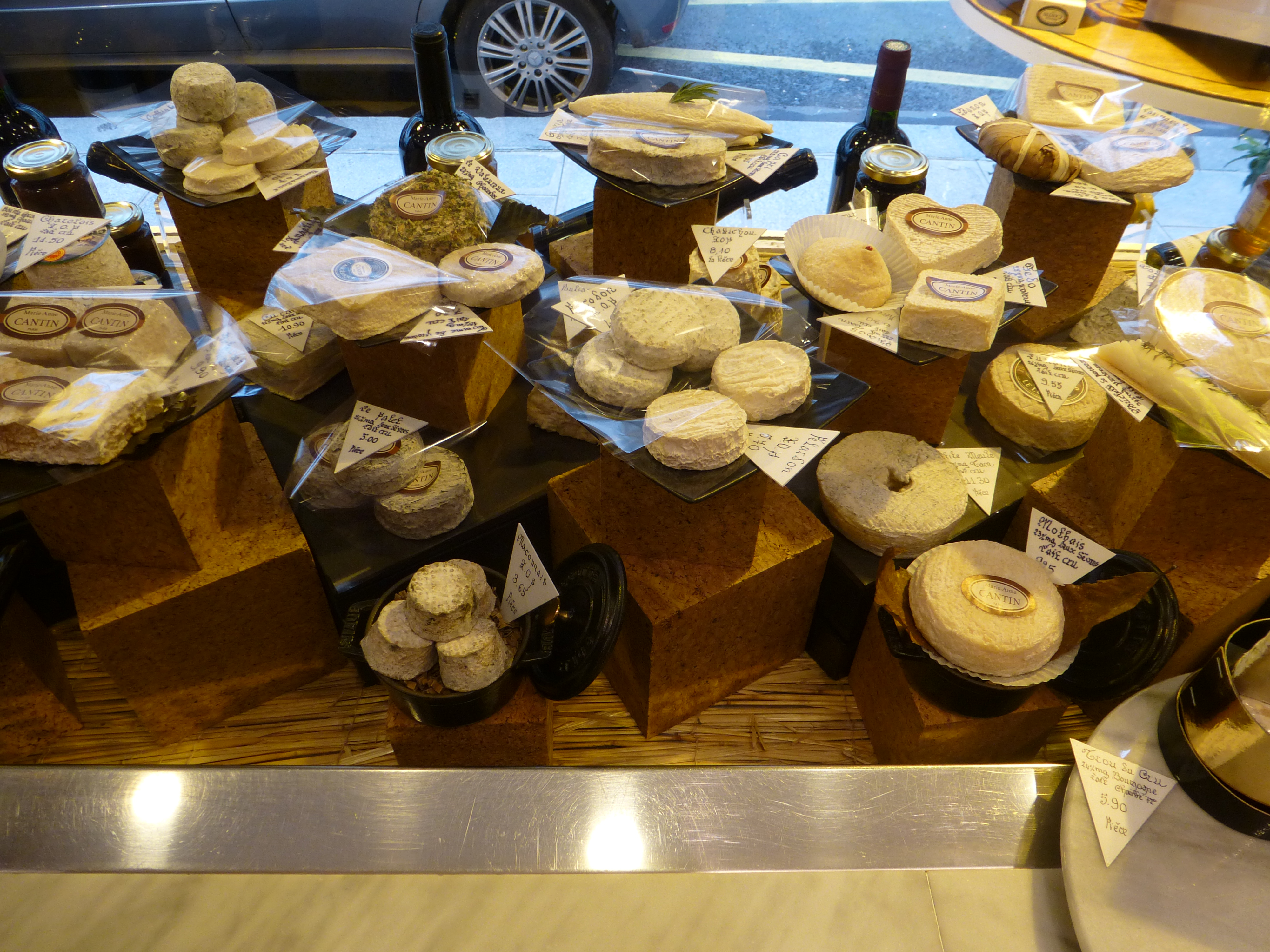 The goal was to pick five types of cheese to have as a picnic (with a crusty baguette, of course) in a nearby park. Our choices: Epoisses, a 40-month aged Comté, a perfectly ripened Camembert, a small oozing disk of St. Marcellin, and the aged goat cheese Pélardon. A nearby park with a view of the Eiffel Tower had a bench perfect for the picnic. The St. Marcellin, always one of my favorite cheeses when ripe and oozing, was pronounced the winner. Here’s a bite of cheese underneath the bough, a loaf of bread, a dearth of wine, but still Paradise enow. 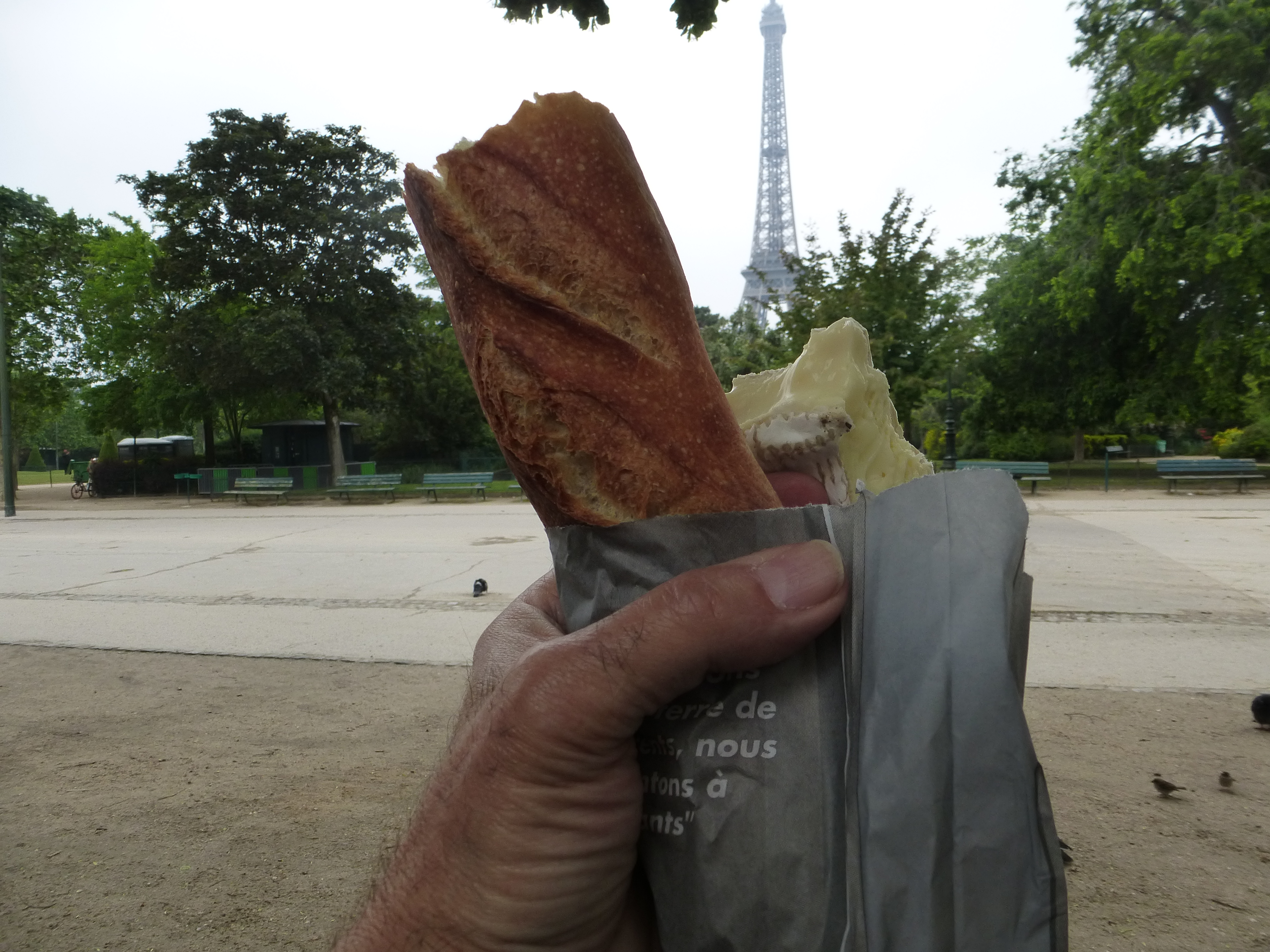 Le Marais is one of the loveliest and most historic areas of Paris, with many fine buildings. It’s also the home of Paris’s Jewish community. Here’s the Agoudas Hakehilos synagogue, built in 1914 by the Art Nouveau architect Hector Guimard, who also designed, among other things, the famous Art Nouveau Metro entrances. 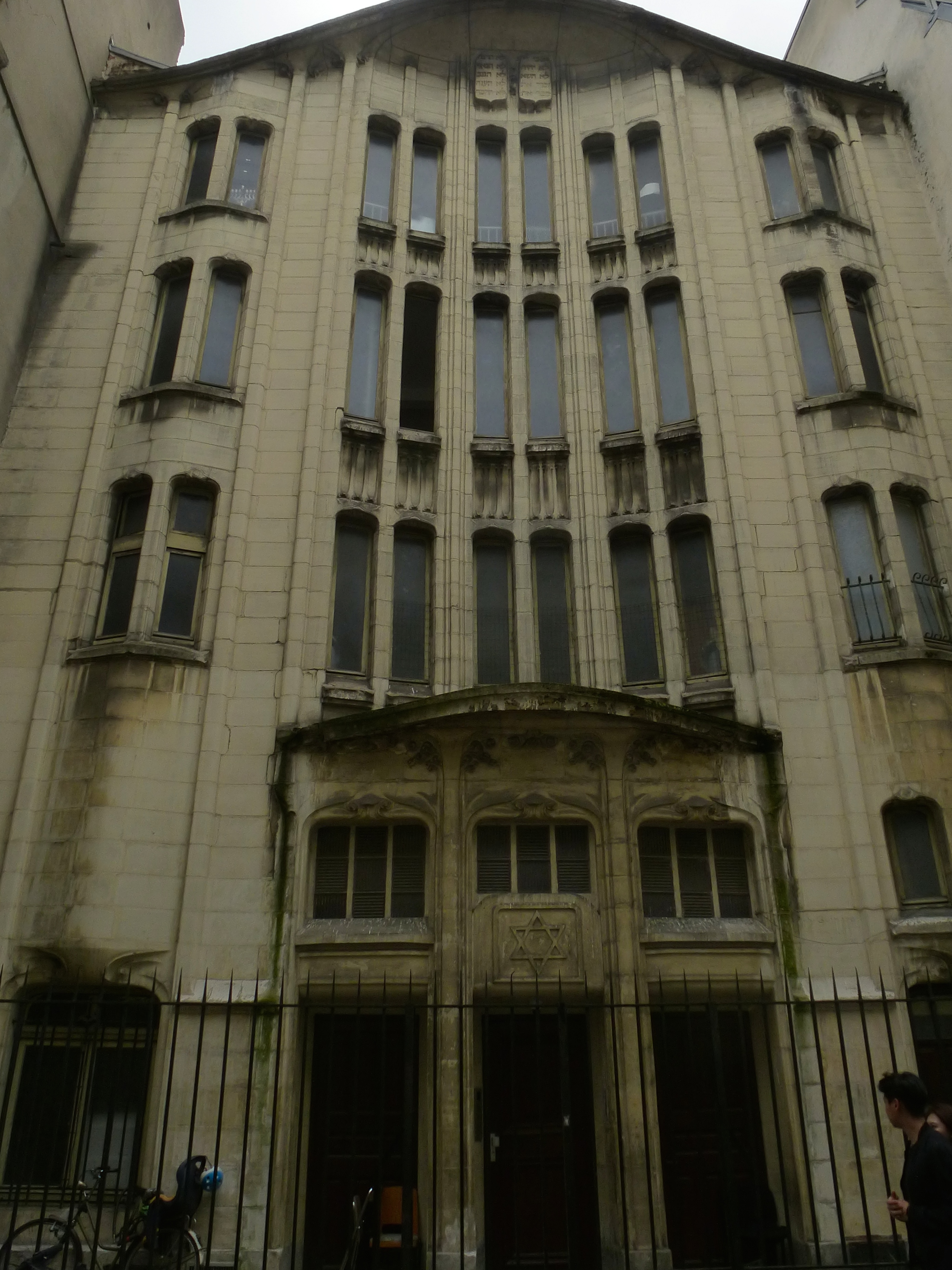 A remnant of the days when most Parisians didn’t have bathing facilities, and so went to one of the many public baths: 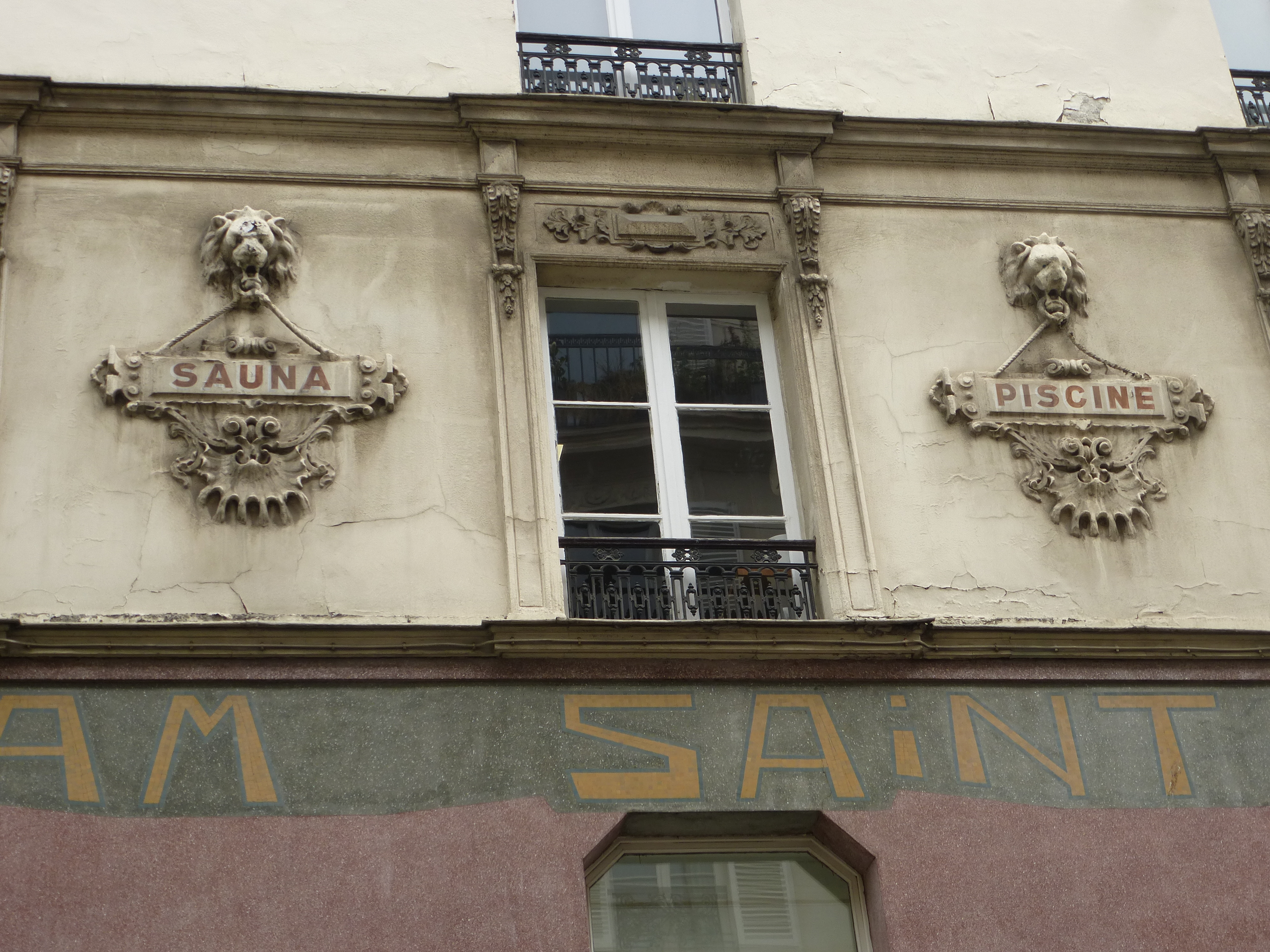 The Marais is also the best place to get falafel. There are many stands, but L’As du Fallafel is the most famous. I wanted one badly but was too full of cheese to eat the overstuffed 6-Euro sandwich. It’s served with hummus, eggplant, and all the trimmings. It’s also kosher. While other places go unpatronized, there’s always a line here: 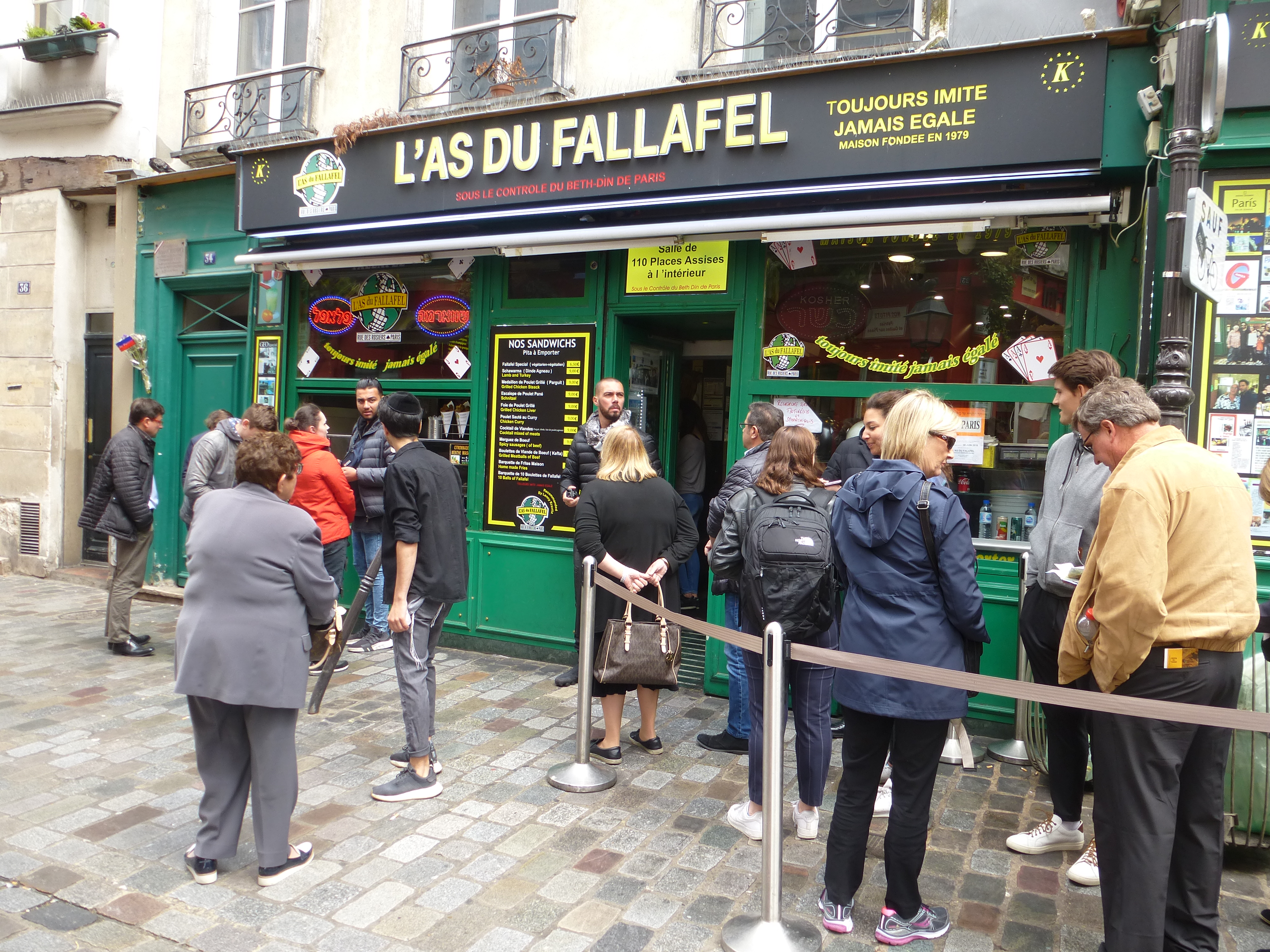 The menu; the thing to get is at the top: the “Fallafel Special”. 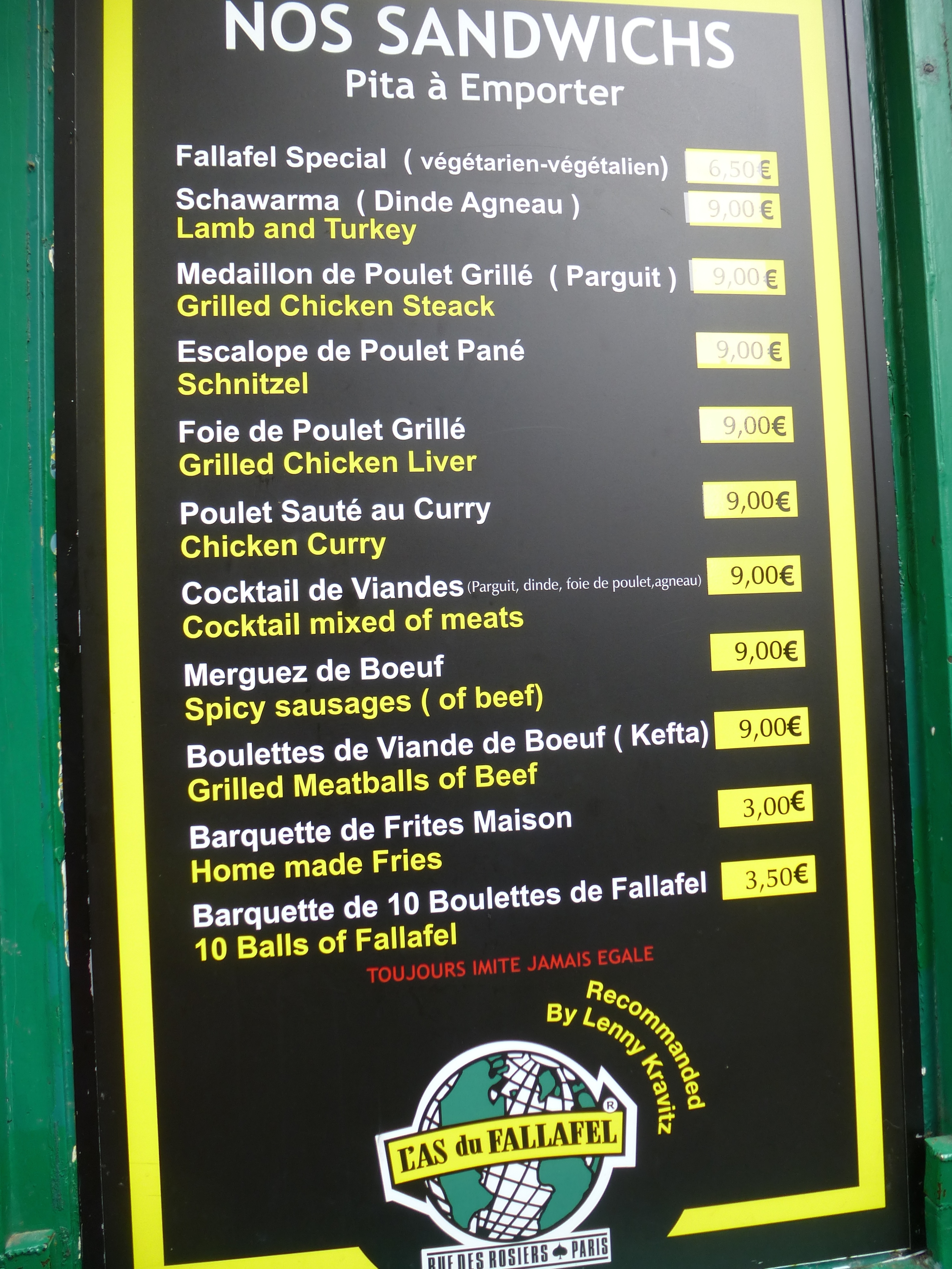 Many customers start eating their sandwich within seconds of getting it: 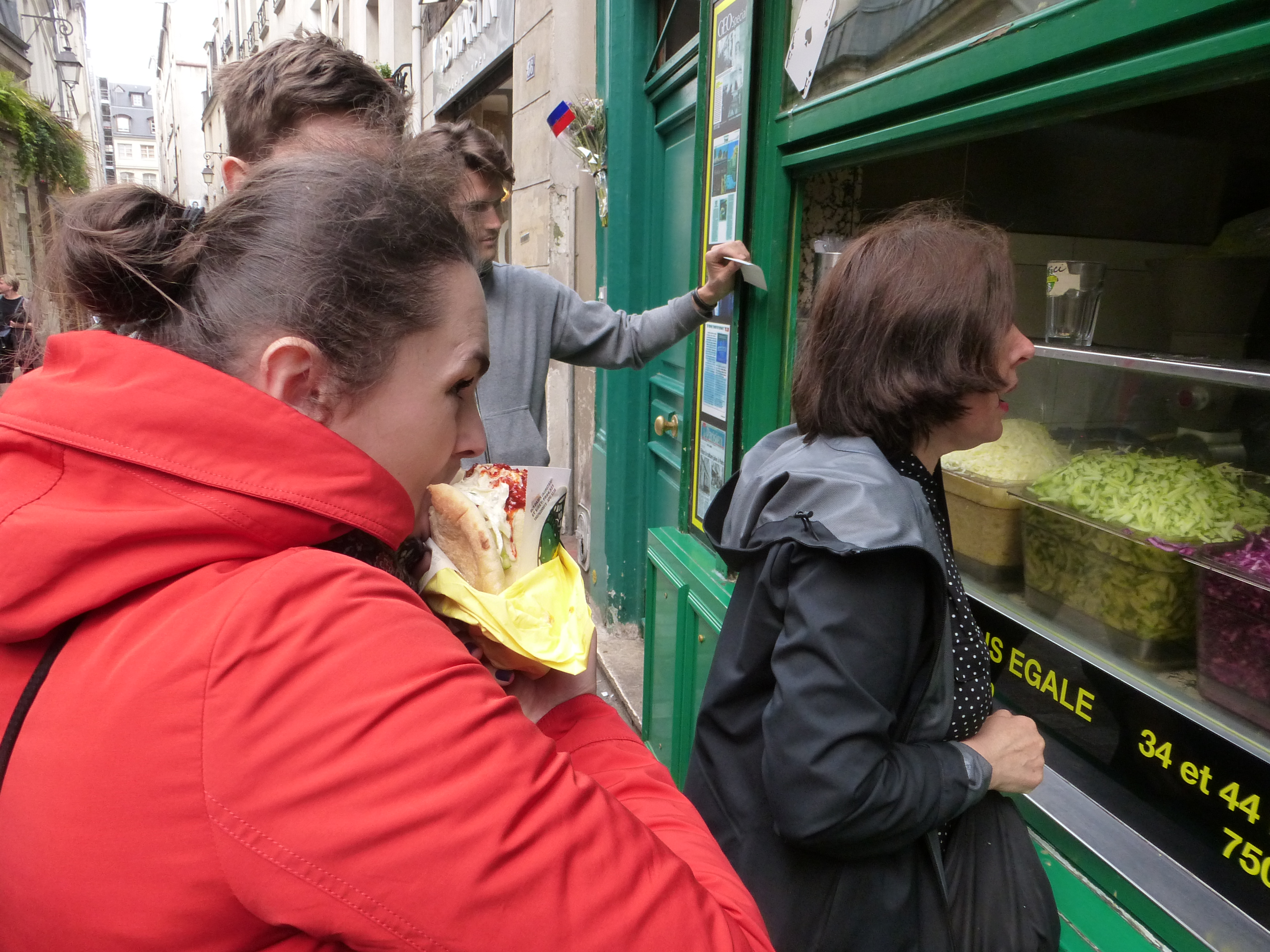 When I lived in Paris, the Jewish restaurant Chez Jo Goldenberg was famous, not just for its food (I never ate there) but because it was subject to one of the most notorious anti-Jewish terrorist attacks of the late 20th century, that of August 9, 1982. Engineered by the Abu Nidal group, it killed 6 people and injured 22. Suspects have been identified, but none have been brought to justice. It was a precursor to the later, ISIS-inspired terrorist attacks in this city.

Here’s the monument commemorating it. The restaurant never regained its patronage, and finally closed 12 years ago. The victims included two Americans: Ann Van Zanten, a curator at the Chicago Historical Society, and Grace Cutler: 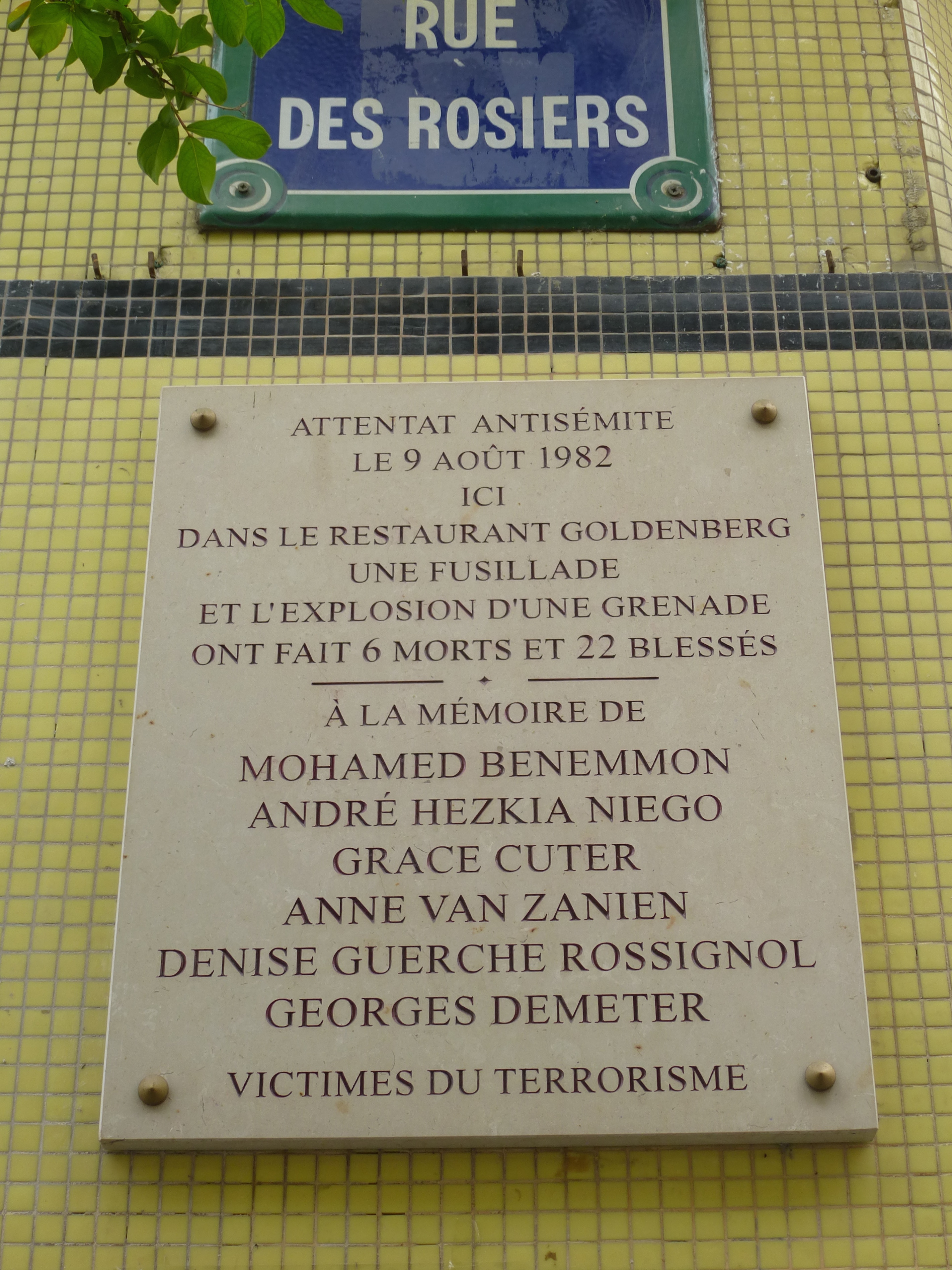 Although I was too full for a falafel, I had to try the gelato at Pozzetto, which is said to outrank Berthillon, purveyor of Paris’s most famous (and to my mind overrated) ice cream. After this review on eater.com came to my attention, I had to try it.

Pozzetto: People will tell you that Berthillon is the best—and obligatory—place to have ice cream in Paris. They’re not exactly wrong. It’s an institution, and definitely the yardstick against which other French ice cream should be measured. But I’d argue Pozzetto is better, even though if we’re being technical here this is gelato, not ice cream. Run by a Sicilian family, it’s a detour-worthy, mom-and-pop gem. The pistachio is made with Sicilian pistacchi, and if you don’t get a scoop of it, you’re an idiot.

I didn’t want to be an idiot, so I purchased a double scoop: pistachio and hazelnut, and both were fantastic. I am not an idiot! 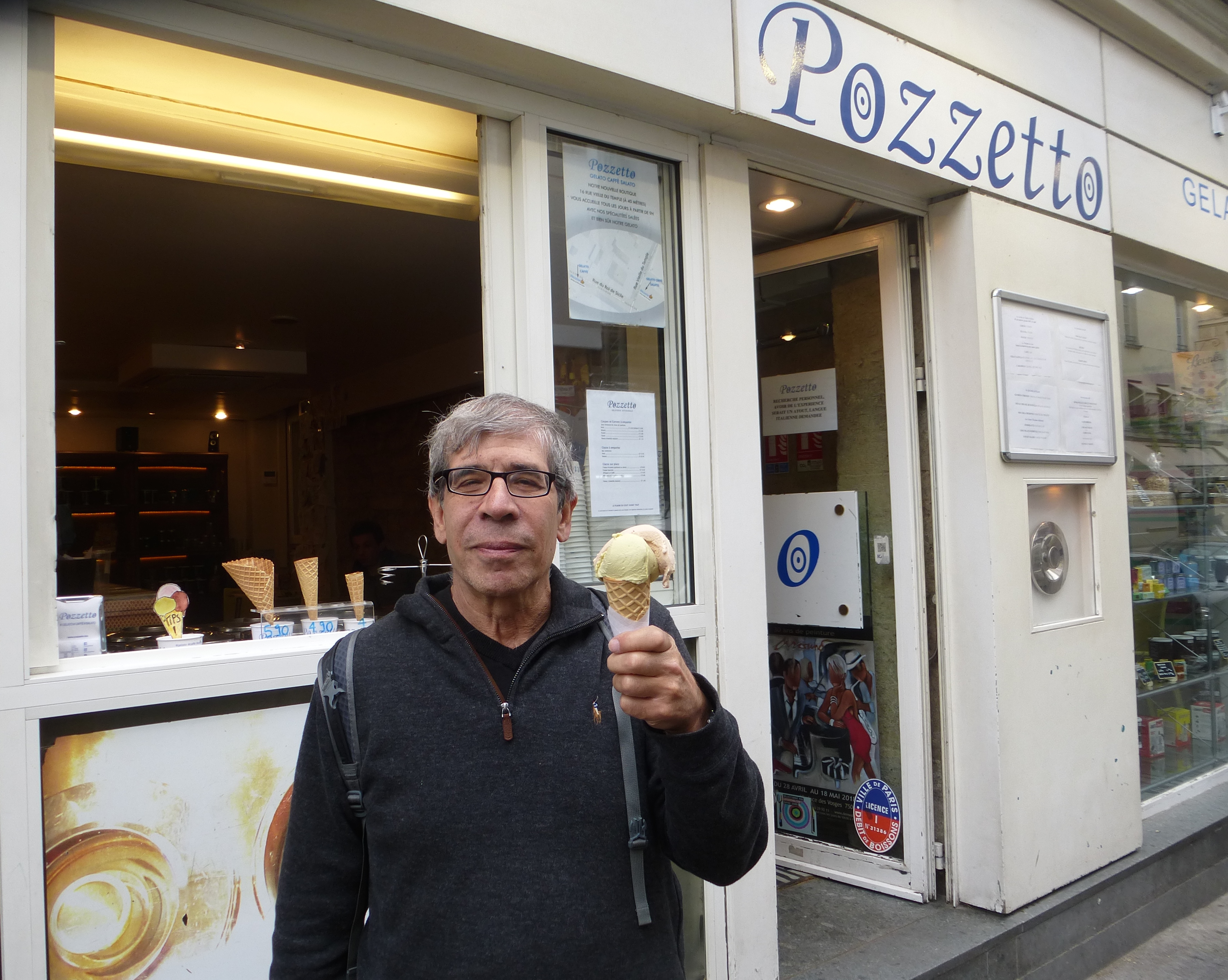 Cats are always the symbol of elegance in Paris, as evidenced by Karl Lagerfeld’s beloved Choupette, whom I mentioned yesterday. 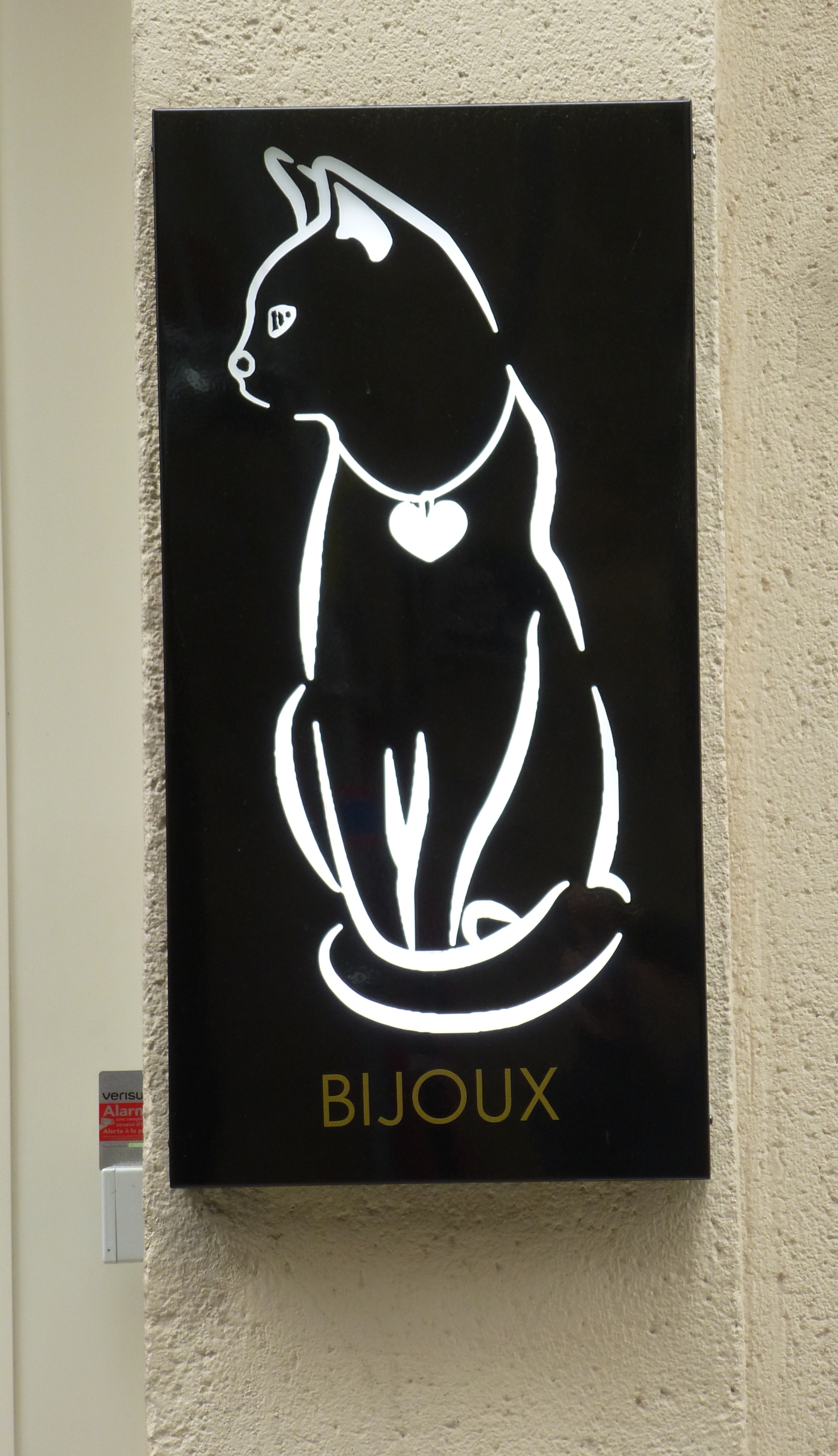 A Lego cat in the Marais; the Chinese symbols read “better luck”, as these are Good Fortune Cats: 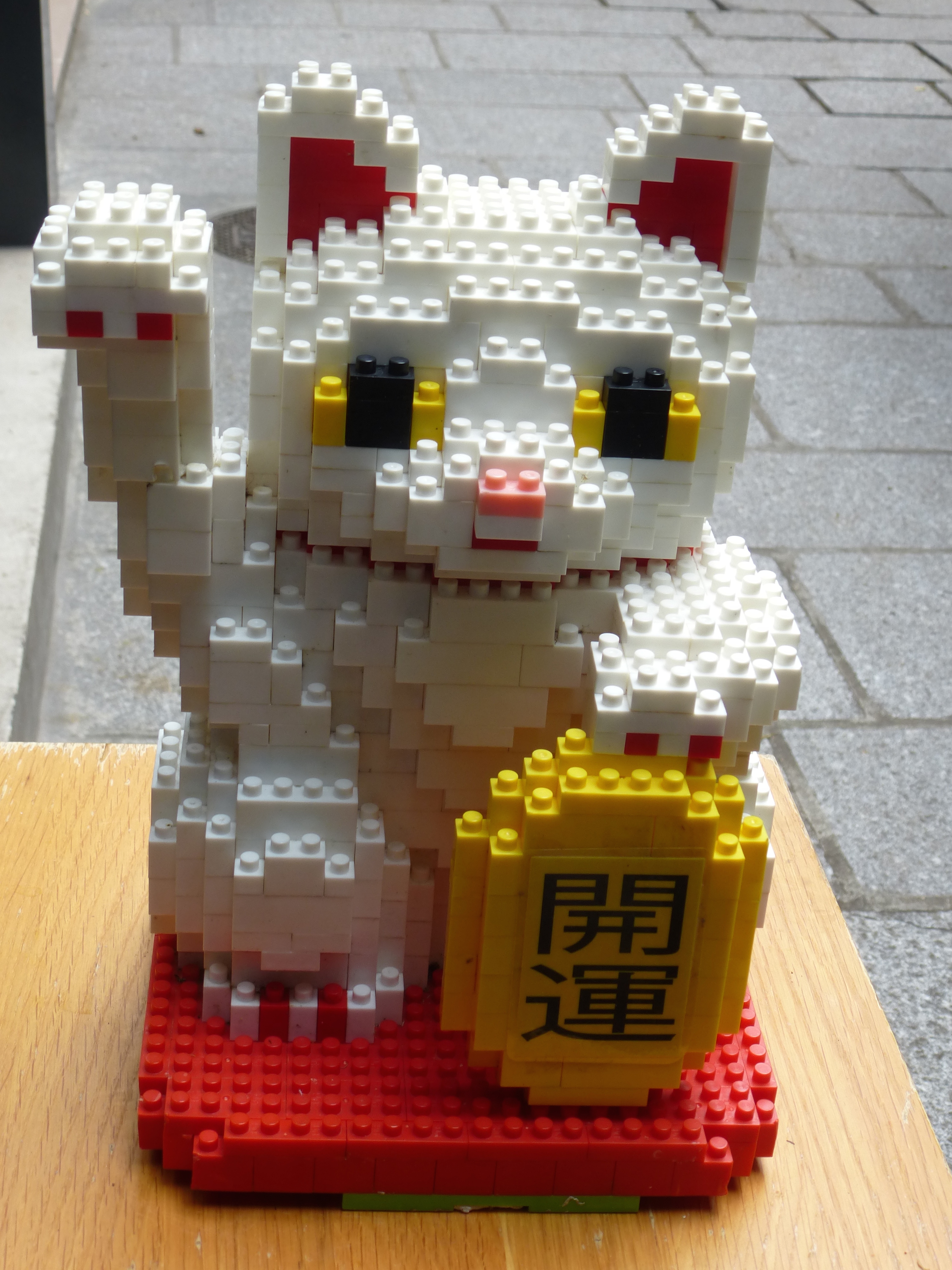 The Marais is full of art galleries. Here’s a striking brass rhino in one of them: 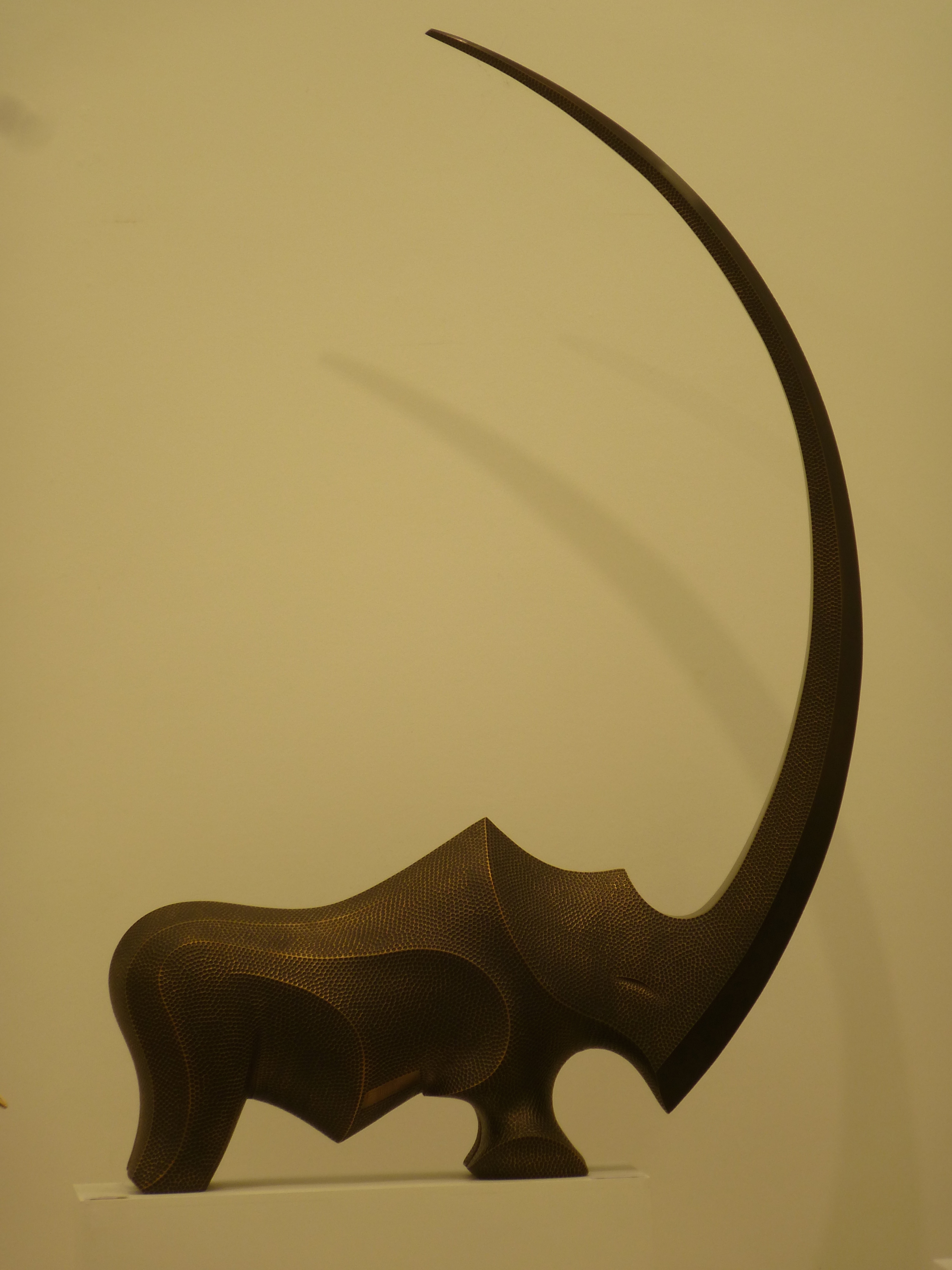 The Place des Vosges, one of the swankiest parts of Paris, is a large square park completely surrounded by one big fancy building. As Wikipedia notes, “It was a fashionable and expensive square to live in during the 17th and 18th centuries, and one of the central reasons Le Marais became so fashionable for the Parisian nobility.” Here are two sides of the square taken from upstairs in Victor Hugo’s house, now a museum: 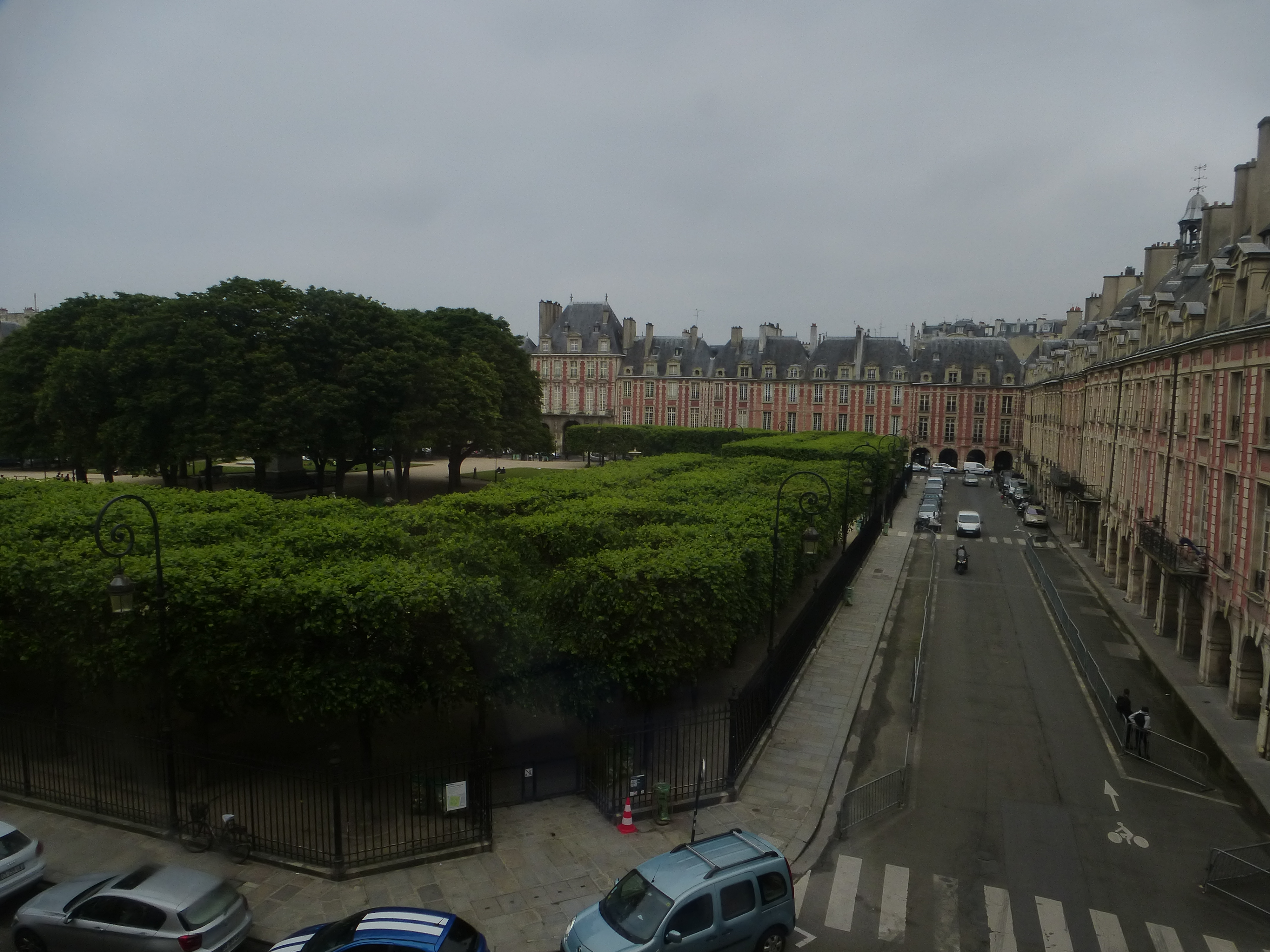 And a panorama from Wikipedia:

Victor Hugo (1802-1885) is of course one of France’s most famous authors, who wrote, among other things, Les Misérables and The Hunchback of Notre-Dame. His house sits at the southwest corner of the square, and two floors are now open for a visit. It was too dark to take many photos, and flash was forbidden, so here are just two food-related items of Hugoiana.

This is the menu at the celebration honoring his 80th birthday. Look at those wines! 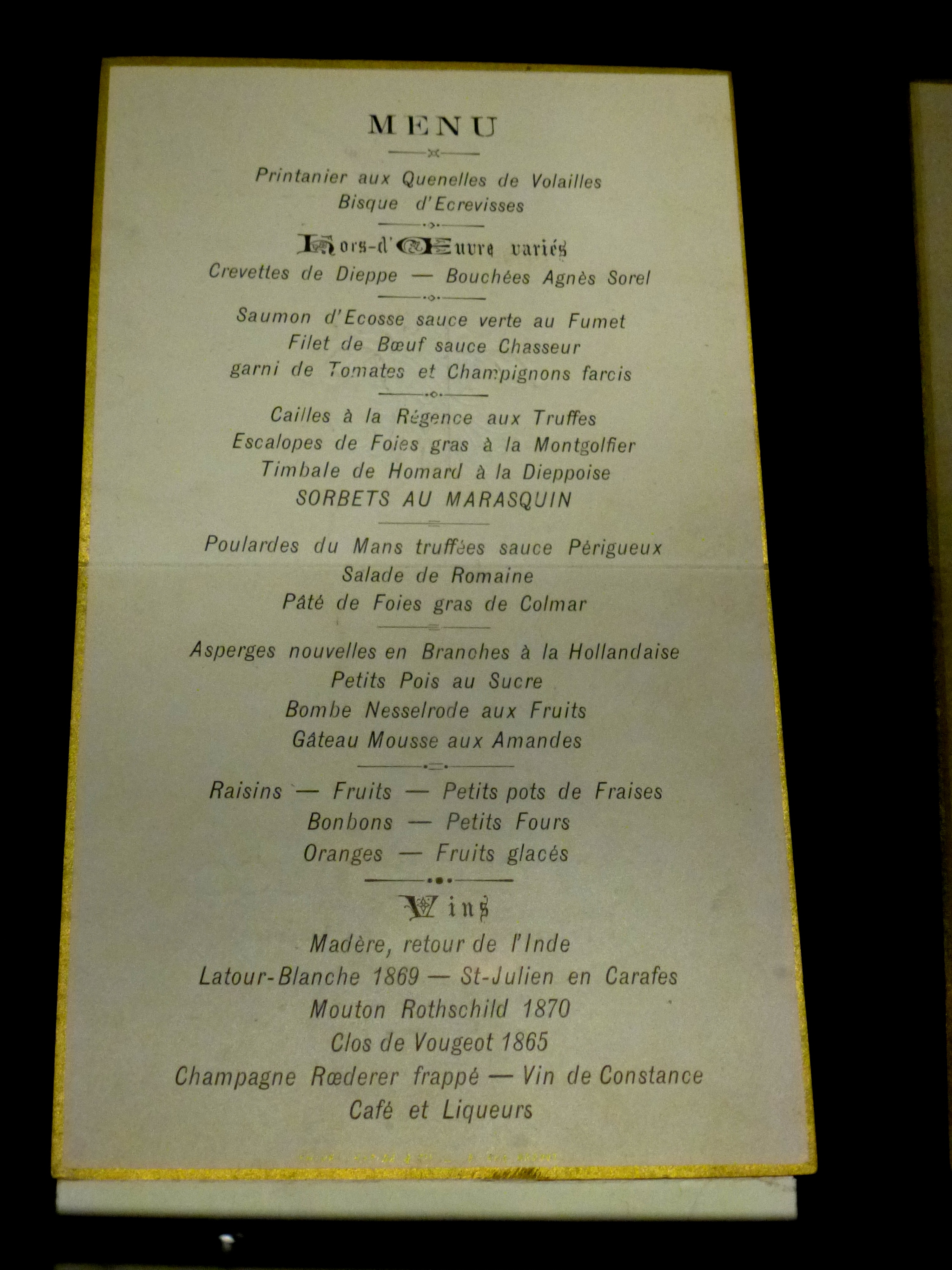 And the Museum has carefully preserved a piece of bread said to have been gnawed on by Hugo: 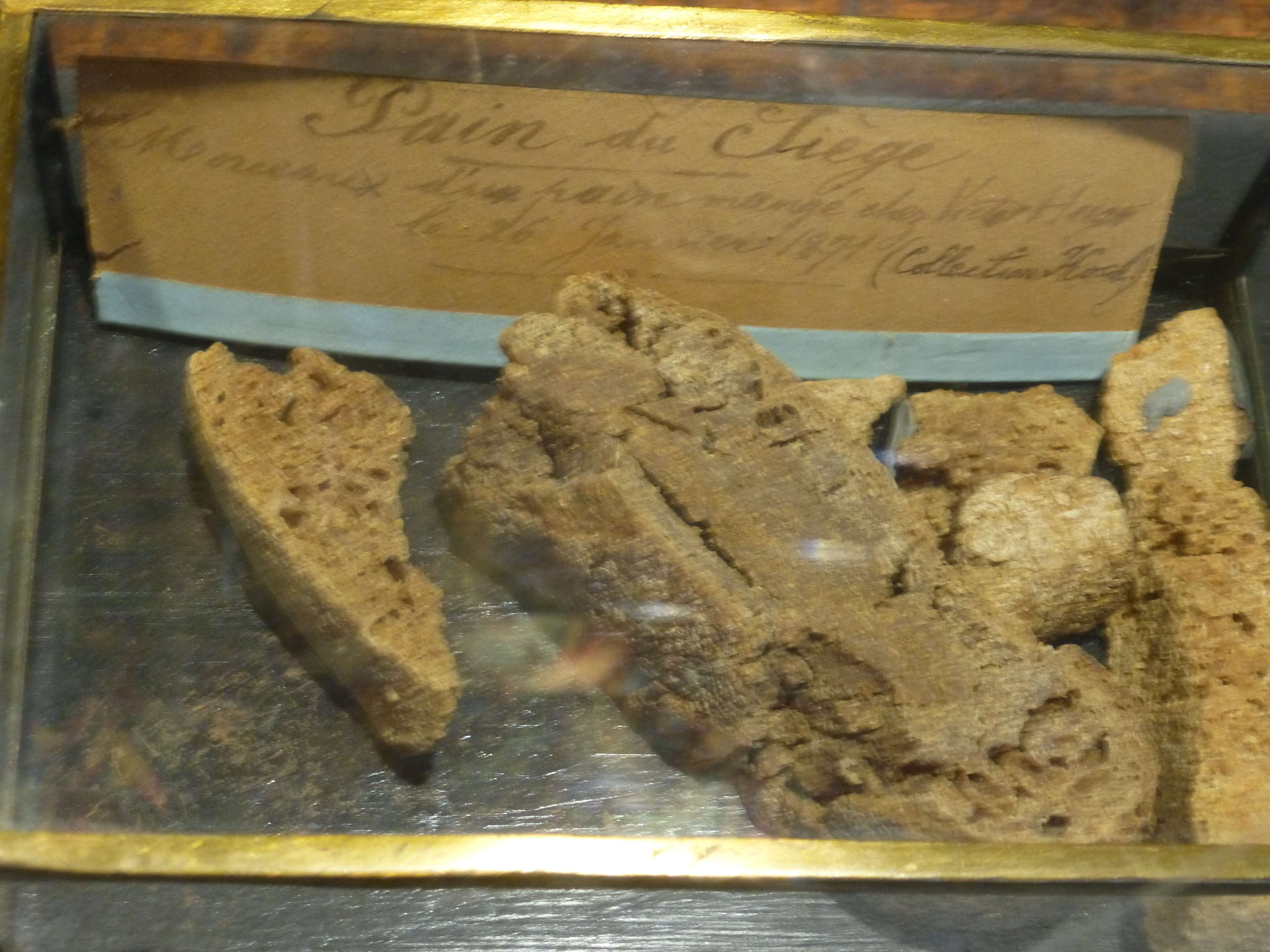 The entire sidewalk around the square is protected by an arched roof: 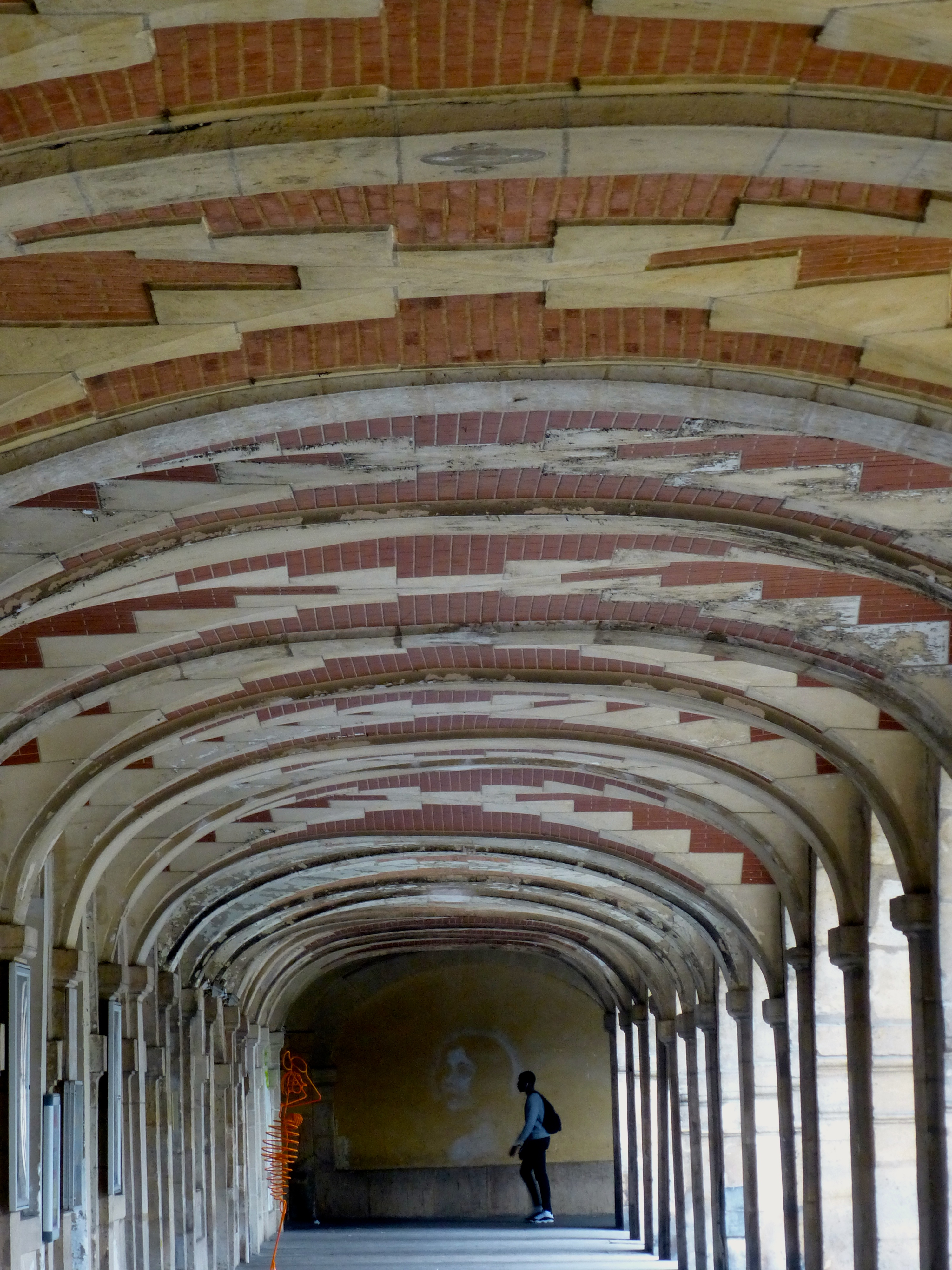