Trigger warning: I will have on display at least two pictures of foie gras this week, so don’t look if you can’t abide it. And please don’t lecture me about it, as I get that lecture every year or so. Yes, I know the issues.

After coffee yesterday, it was off to the Luxembourg Gardens, one of Paris’s many green respites, with immaculately tended lawns, ranks of chestnut trees towering over pebbled paths, and the pungent odor of boxwood. The 57-acre garden surrounds the Luxembourg Palace, built in 1612 by Marie de’ Medici, the widow of King Henry IV of France. For the last 60 years the Palace has been the seat of the French Senate. Here it is: 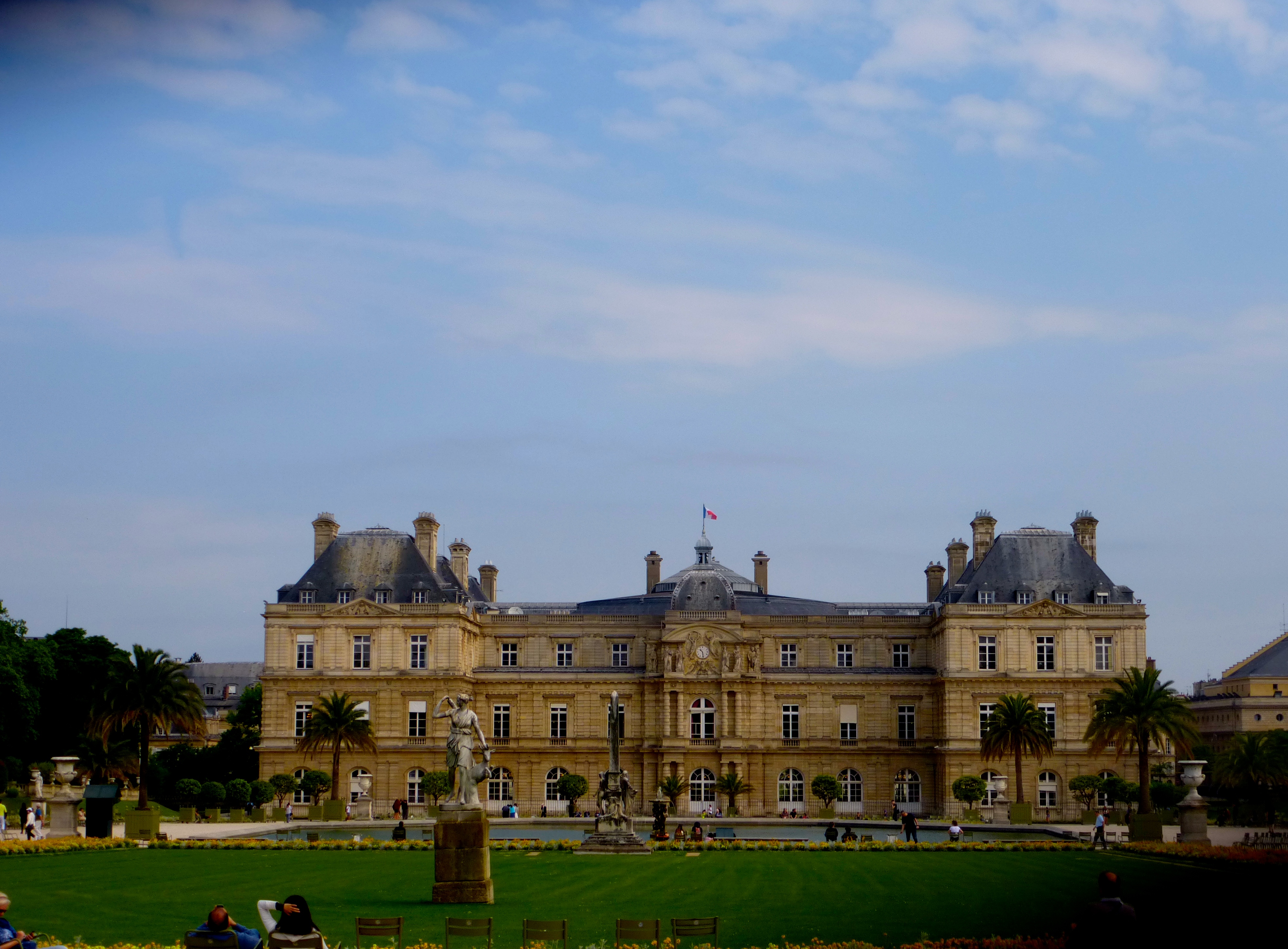 One of the lovely sculptures in the garden: 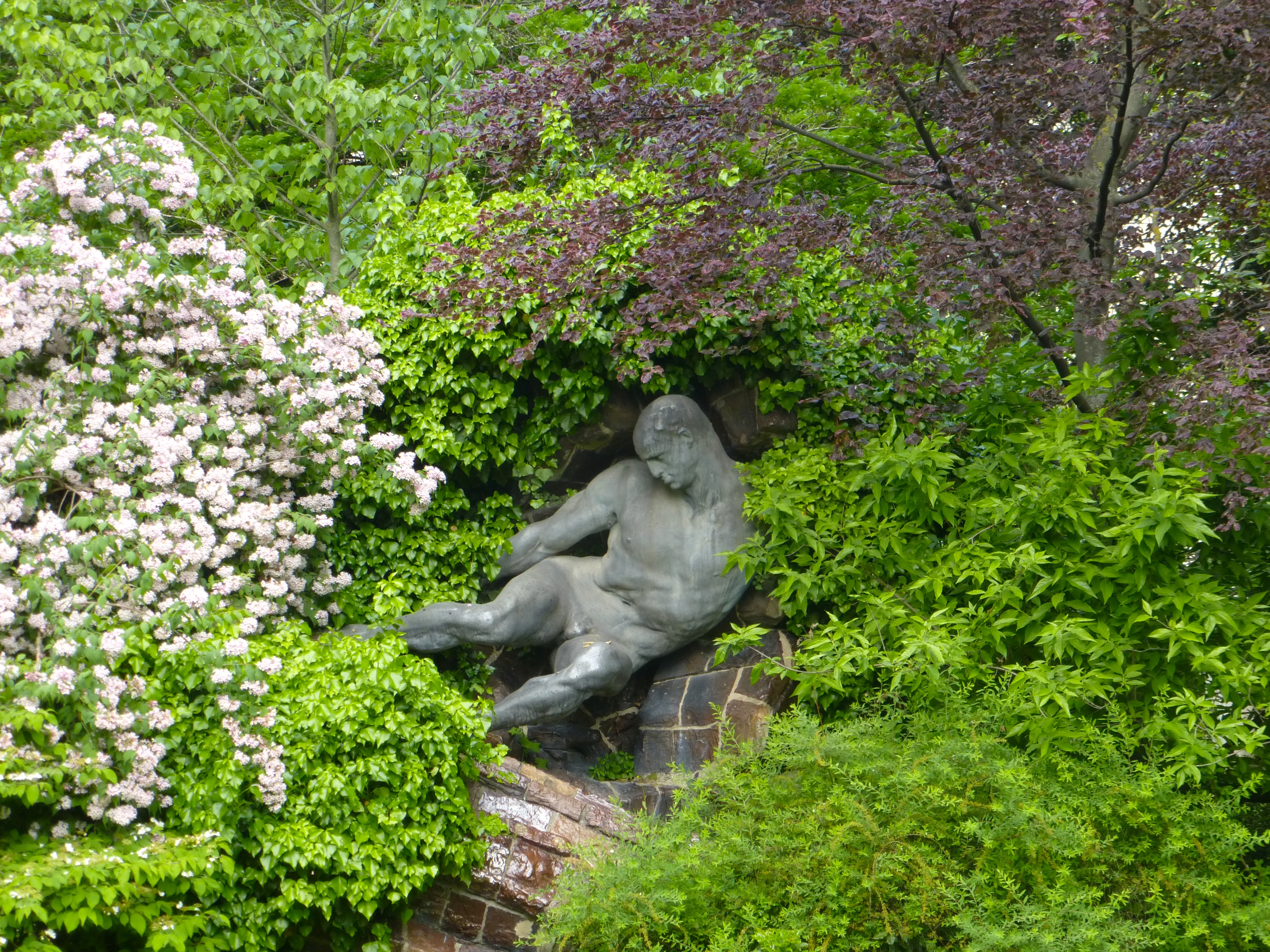 The statues have wire headdresses with spikes sticking out to keep the pigeons from pooing on the artwork: 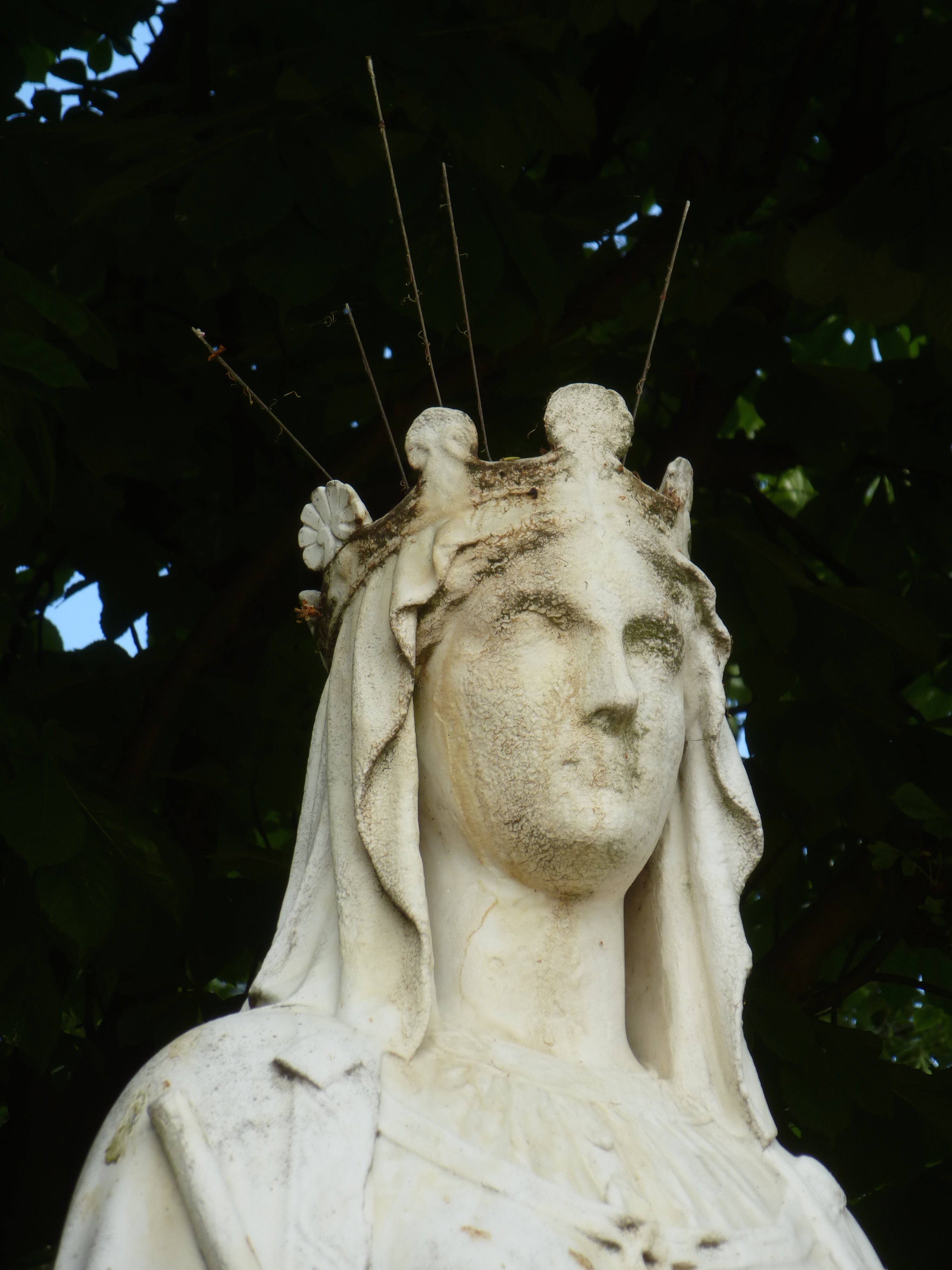 There was a Tintoretto (1518-1594) exhibit (“Birth of a Genius“) at the Musée du Luxembourg, which runs through July 1. It concentrates on his early works, and clearly shows how he gained power from his early paintings, which featured humans with too-small heads and a lack of perspective, to a mature power that in some cases resembles Rembrandt. Here are four pictures of the paintings: 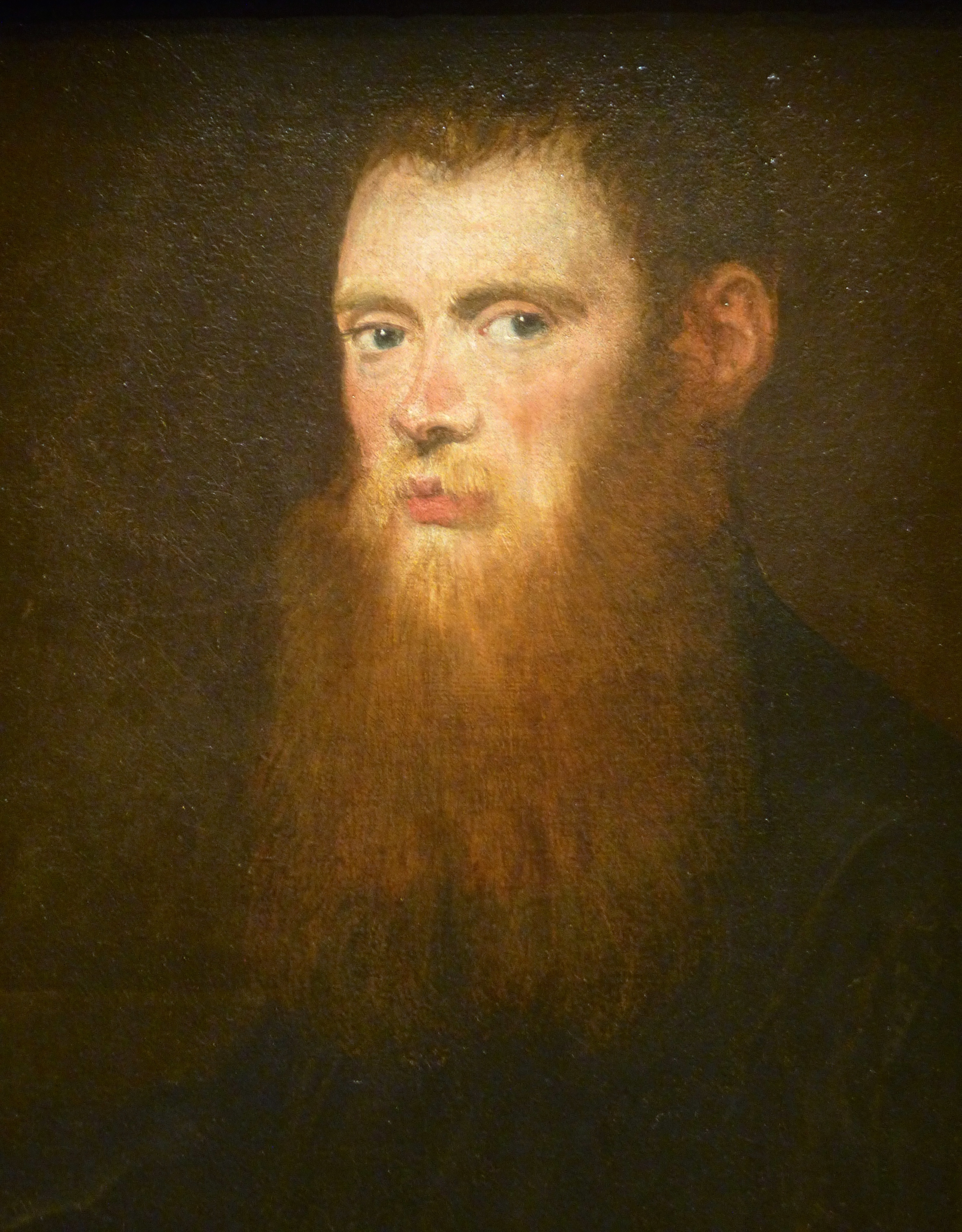 Part of a big painting of Esther and Ahasuerus (the Biblical story that produced the Jewish holiday of Purim); painted 1554-1555, on loan from the Prado: 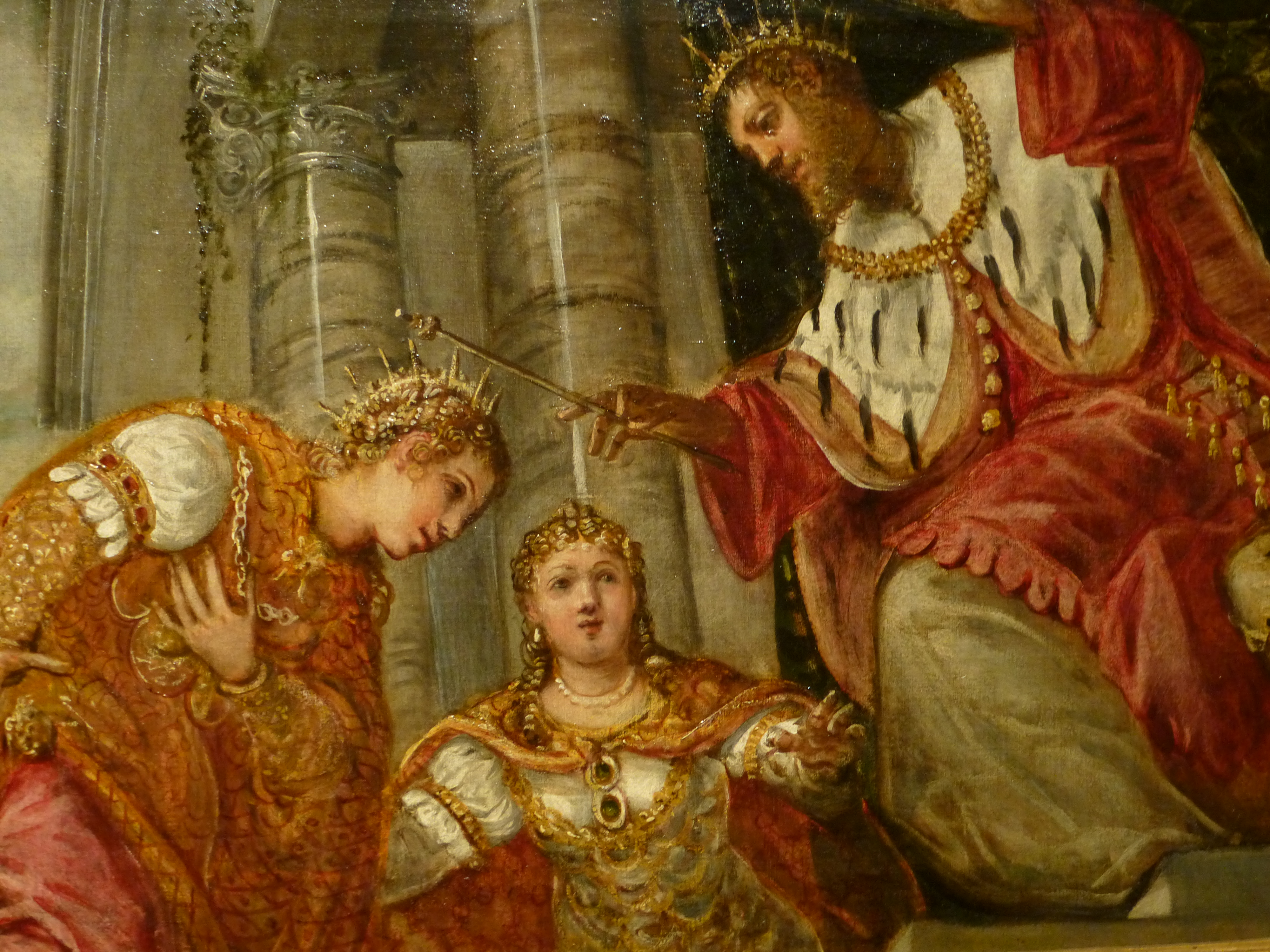 Labyrinth of Love, 1538-1552, loaned by Queen Elizabeth II. This is truly a garden of earthly delights. 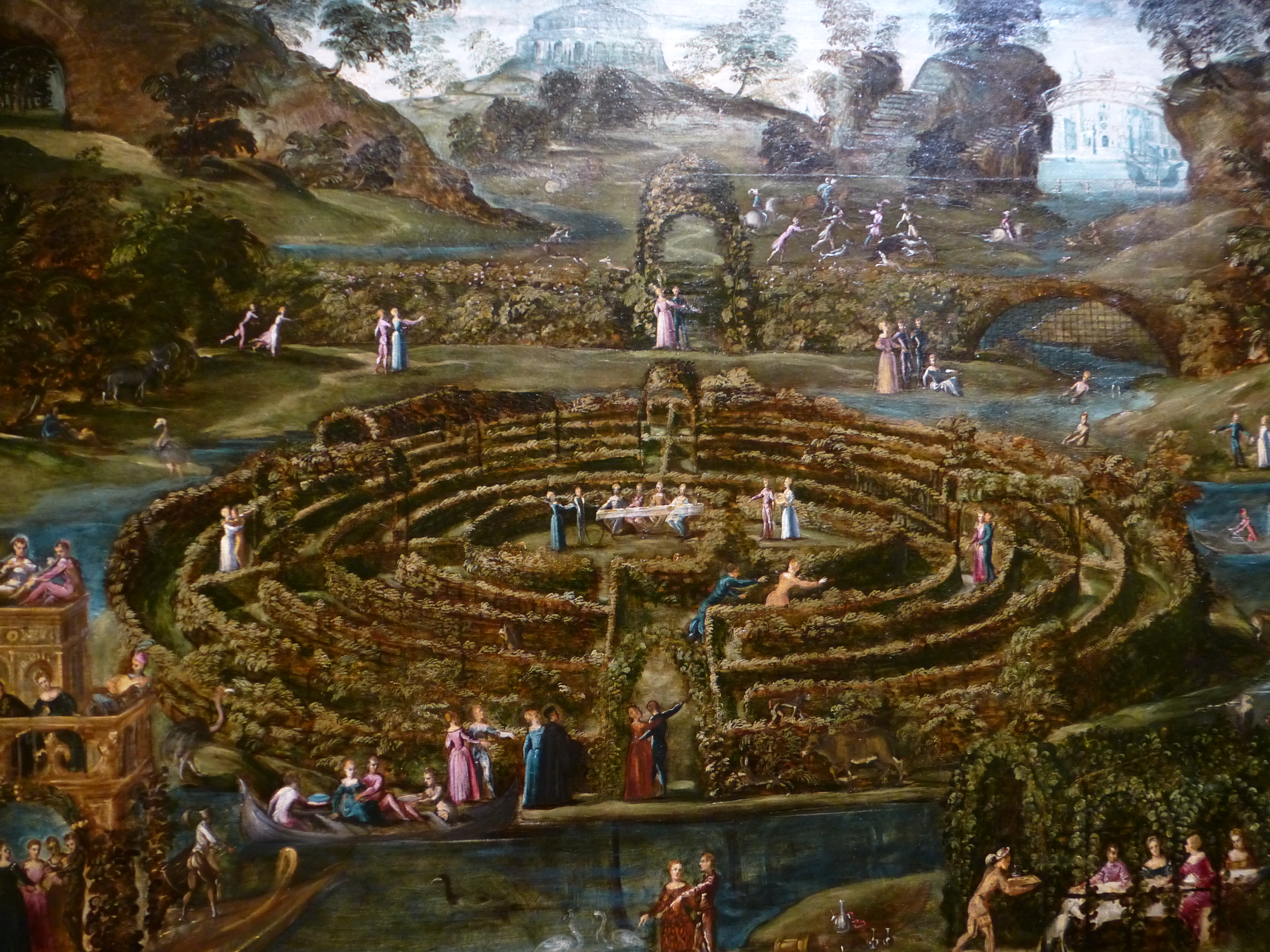 A wonderful portrait; I’m not sure if it’s a self portrait as I can’t find a matching image on the web: 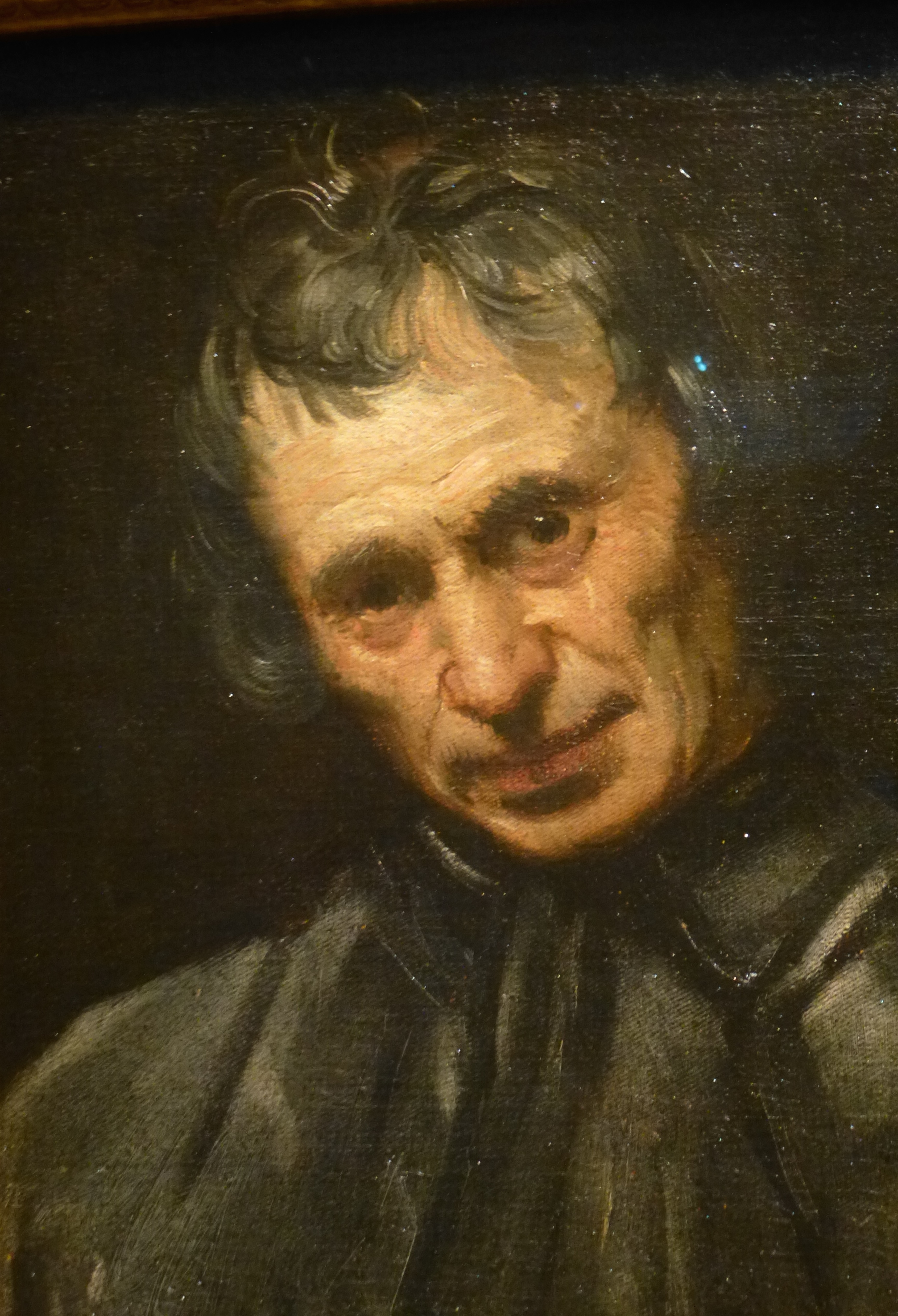 For more on the exhibit (and pictures of other paintings) go here.

Looking at art always rouses the appetite, and nearby was the famed bistro Josephine “Chez Dumonet”, which has several classic dishes. First, the exterior: 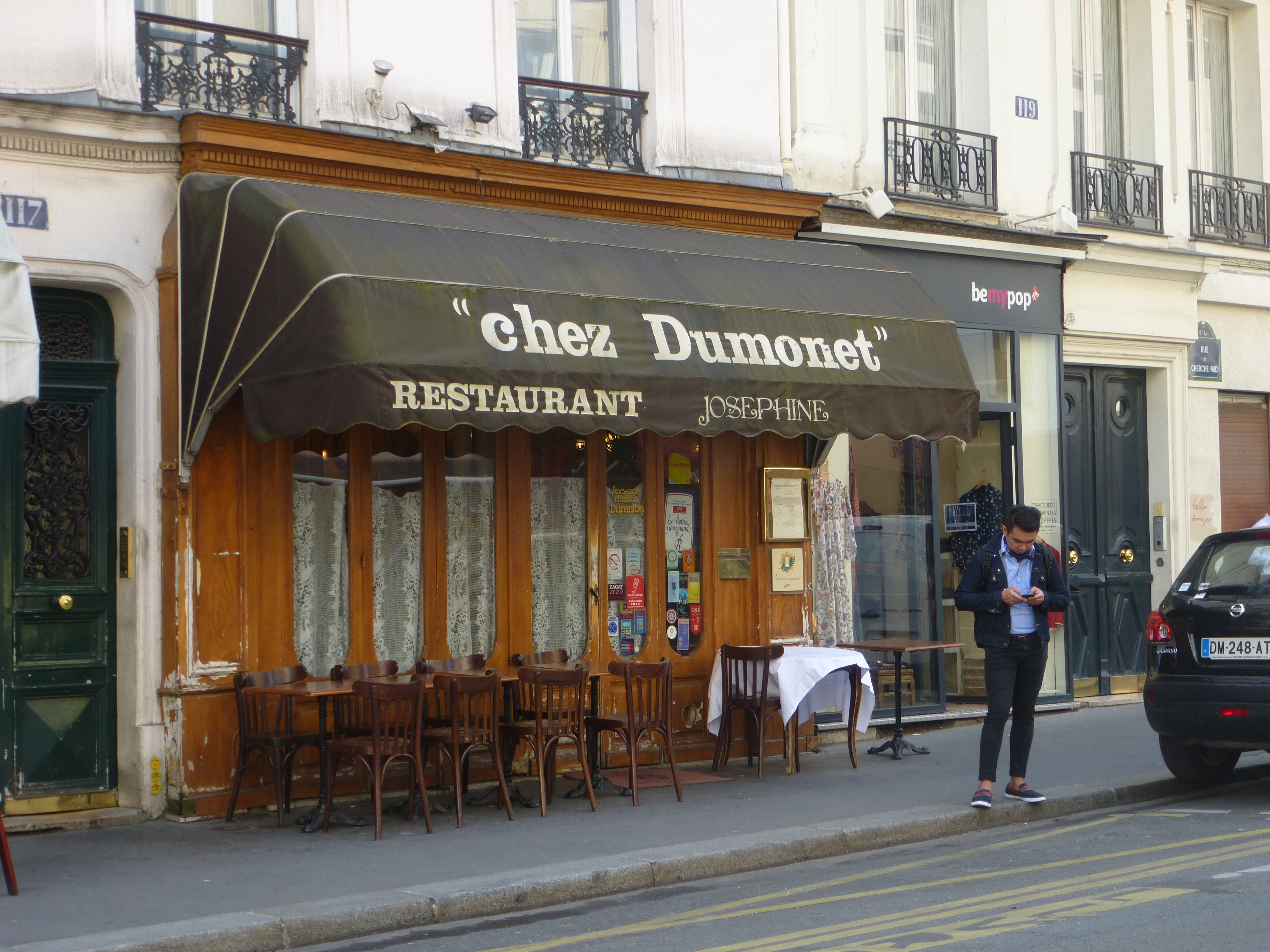 The unchanged and ancient interior. This is what a bistro should look like: 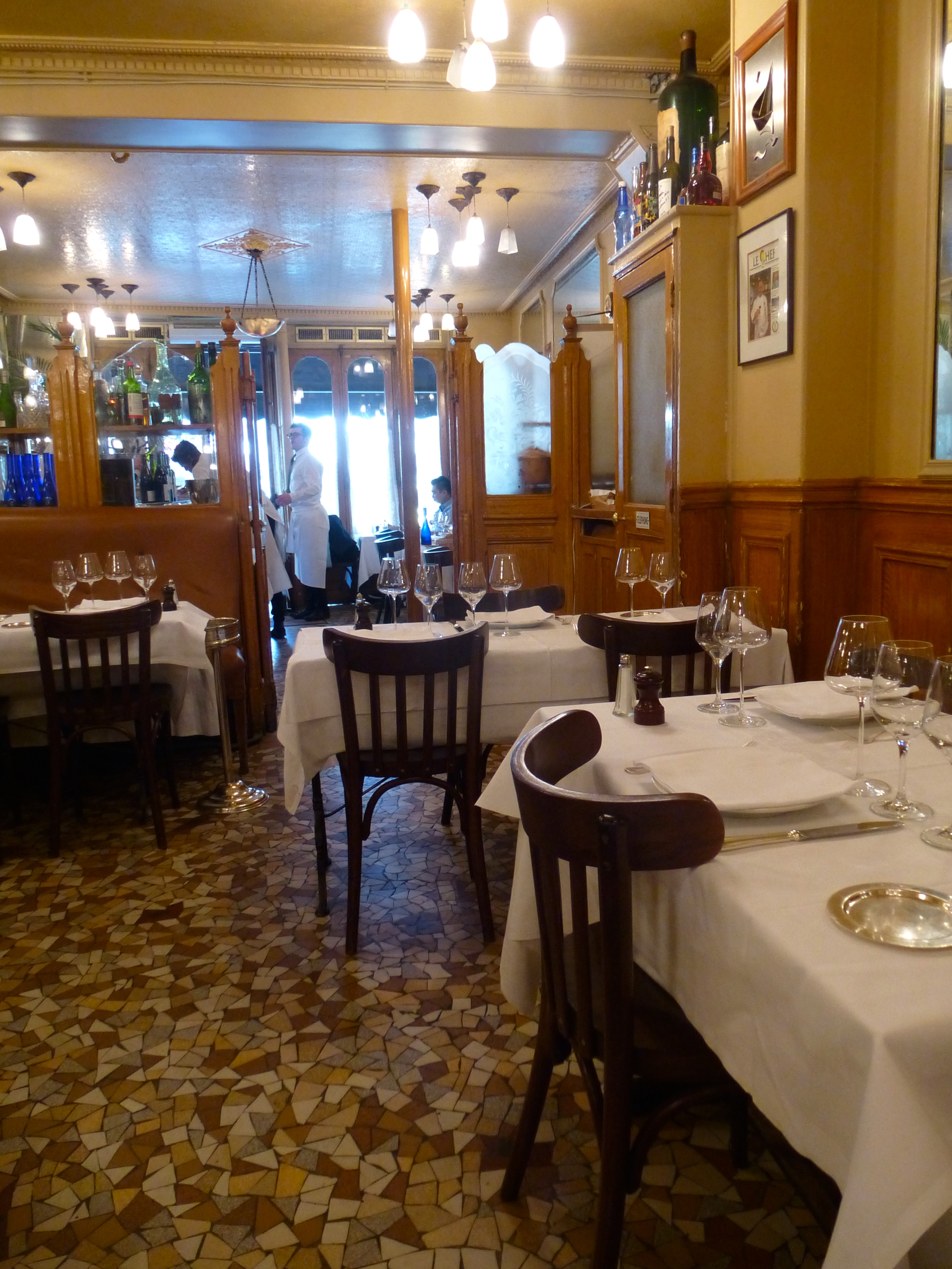 On the wall, a drawing of Le Chat, the subject of a famous cartoon strip by the Belgian artist Philippe Geluck. (Le Chat also adorns the wall of L’Ami Jean in a more salacious form.) The waiter at Chez Dumonet told us that Geluck, after dining there, drew it on a wine-stained tablecloth. He must eat well! 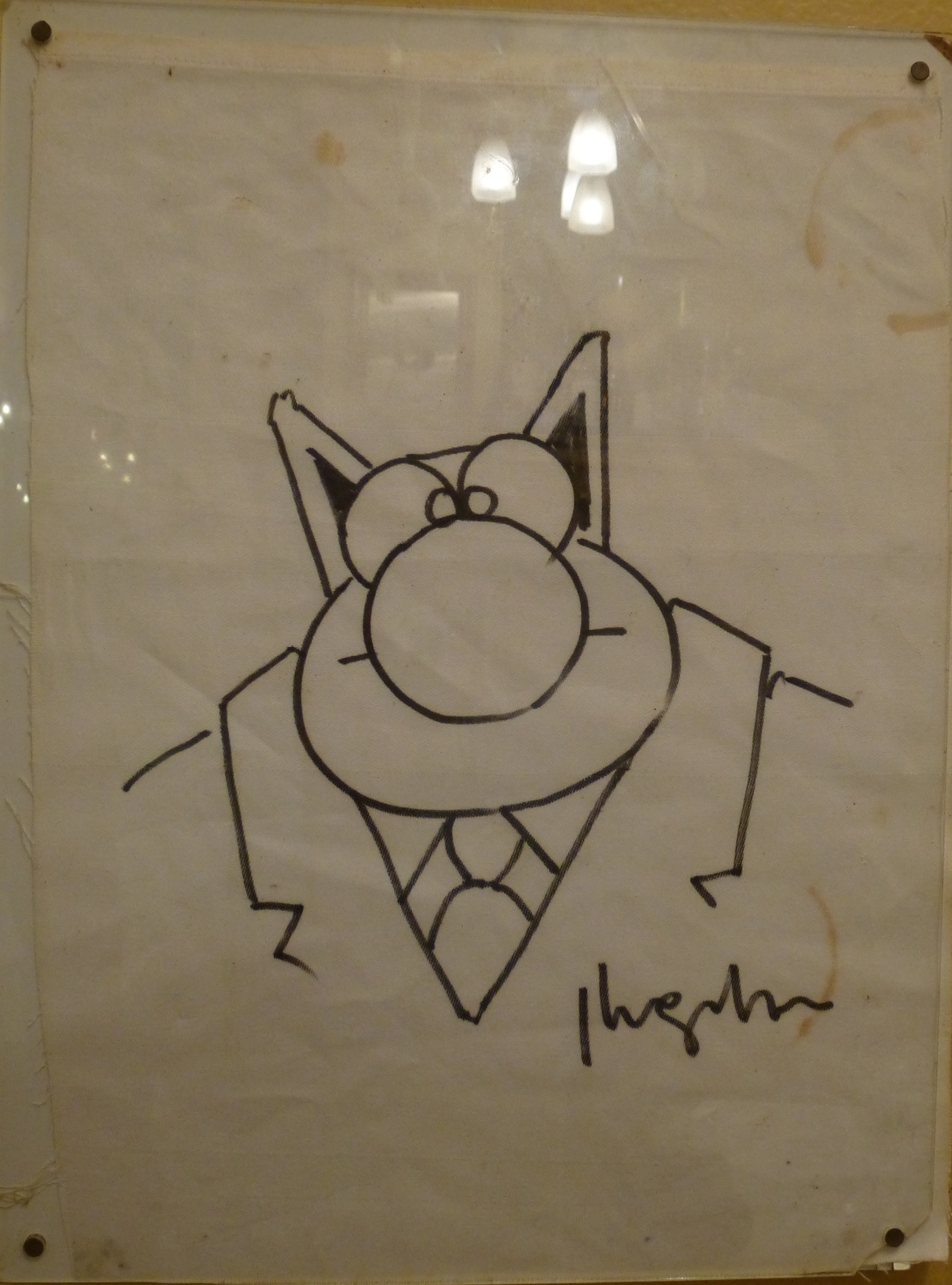 A copious, rich, and bibulous lunch ensued. The free amuse-bouche included a salmon-and-cheese mixture on toast and a cheese puff of some sort: 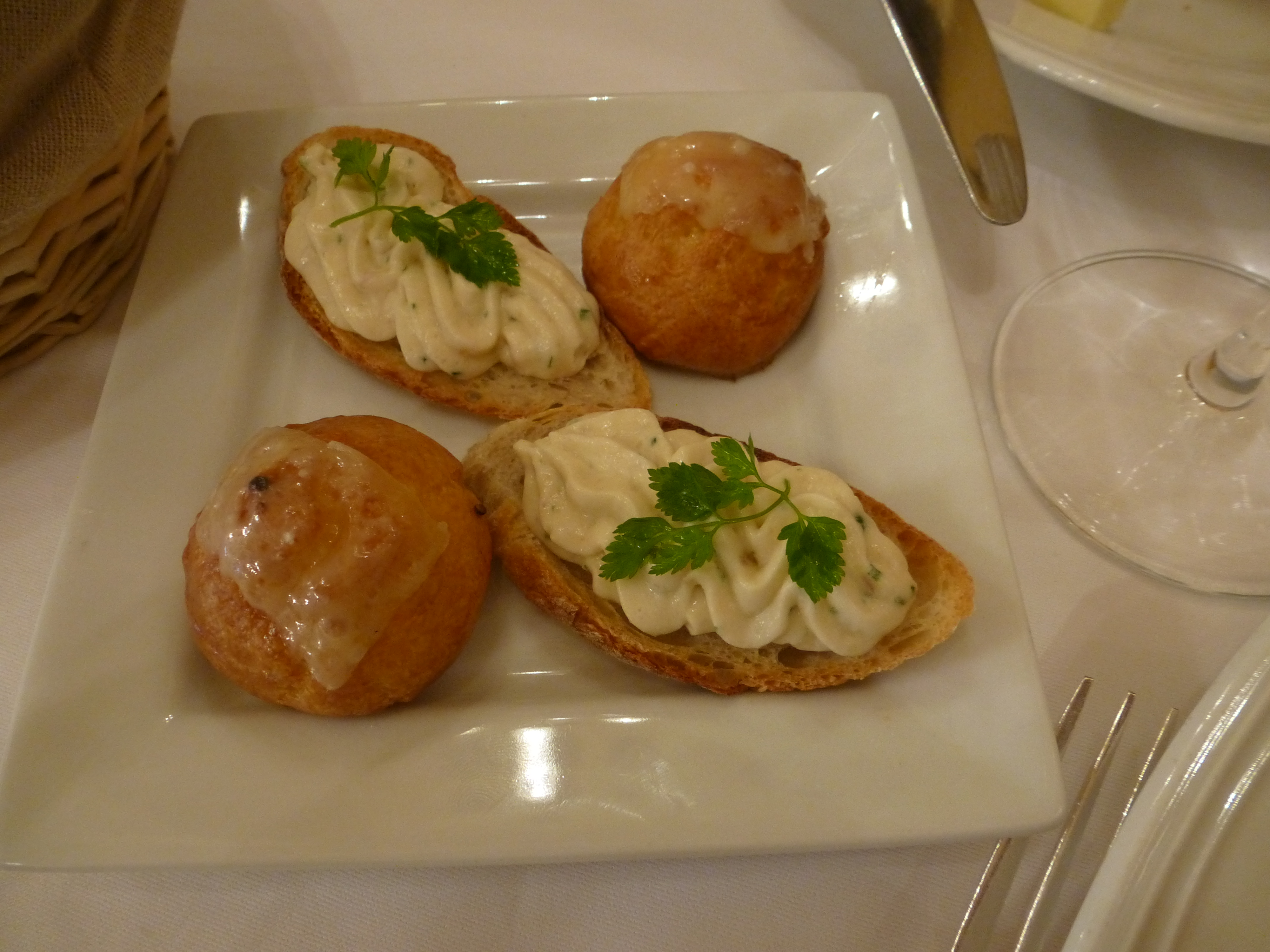 Appetizers (these are half portions): Morels stuffed with foie gras, truffles, cognac, port, and, according to the waiter, 13 other ingredients. They were fantastic. 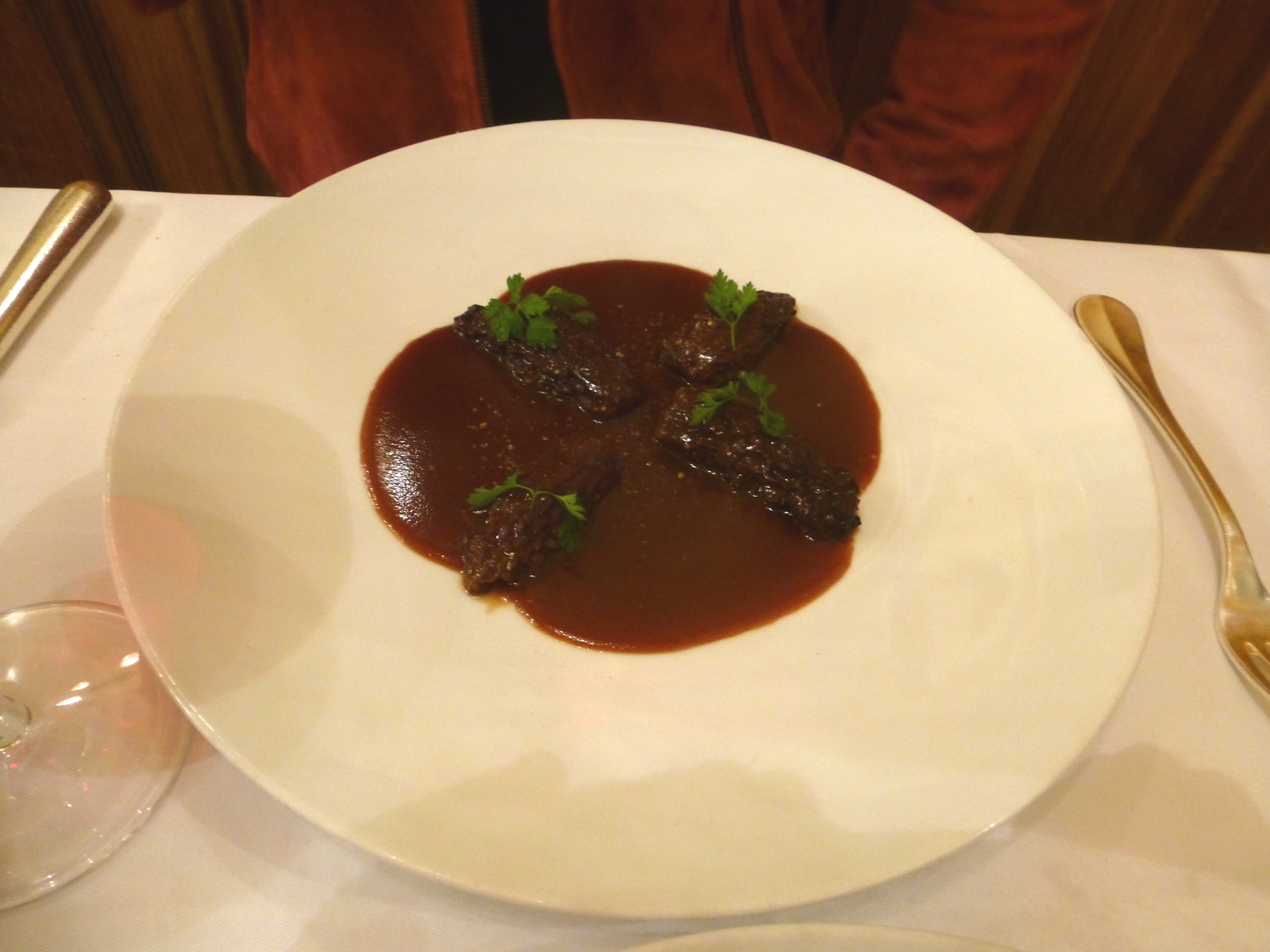 And some foie gras de canard (again, a half portion), served with toasted pain au levain. This was made in house, and although it looks small it was substantial and filling (and of course delicious): 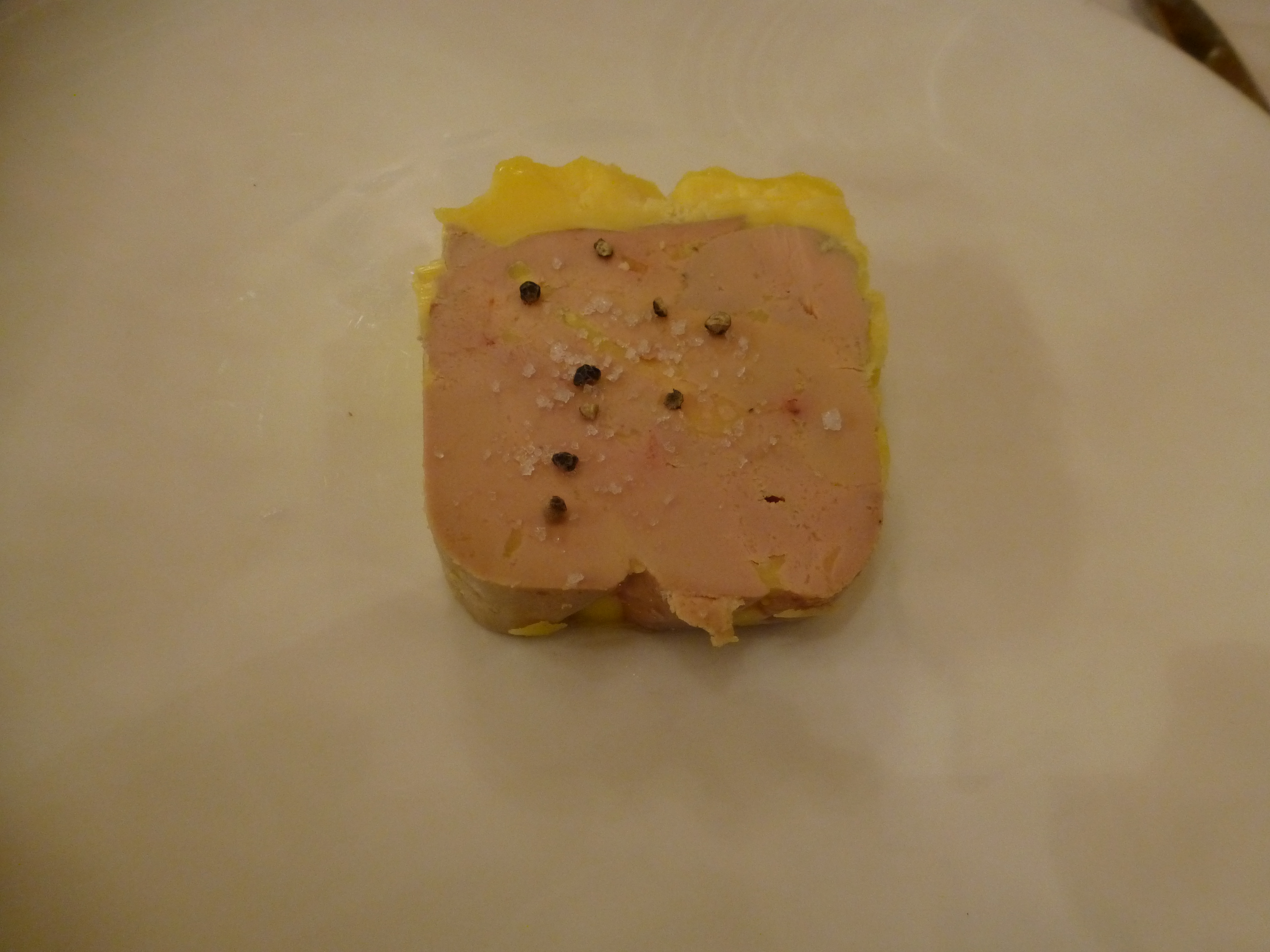 Main courses (“plats”; in France an “entrée” is what we call an appetizer): a half portion of the house speciality,bœuf bourguignon, and a full portion of confit de canard with fantastic potatoes—crispy on the outside and creamy on the inside.

The beef burgundy was served in a copper pot alongside another dish of hot homemade noodles, which cut the incredible richness of this dish. A blackish-red sauce enrobed big chunks of soft, stewed beef. This was the dish that did me in! And this was a half portion (not all the dish is shown): 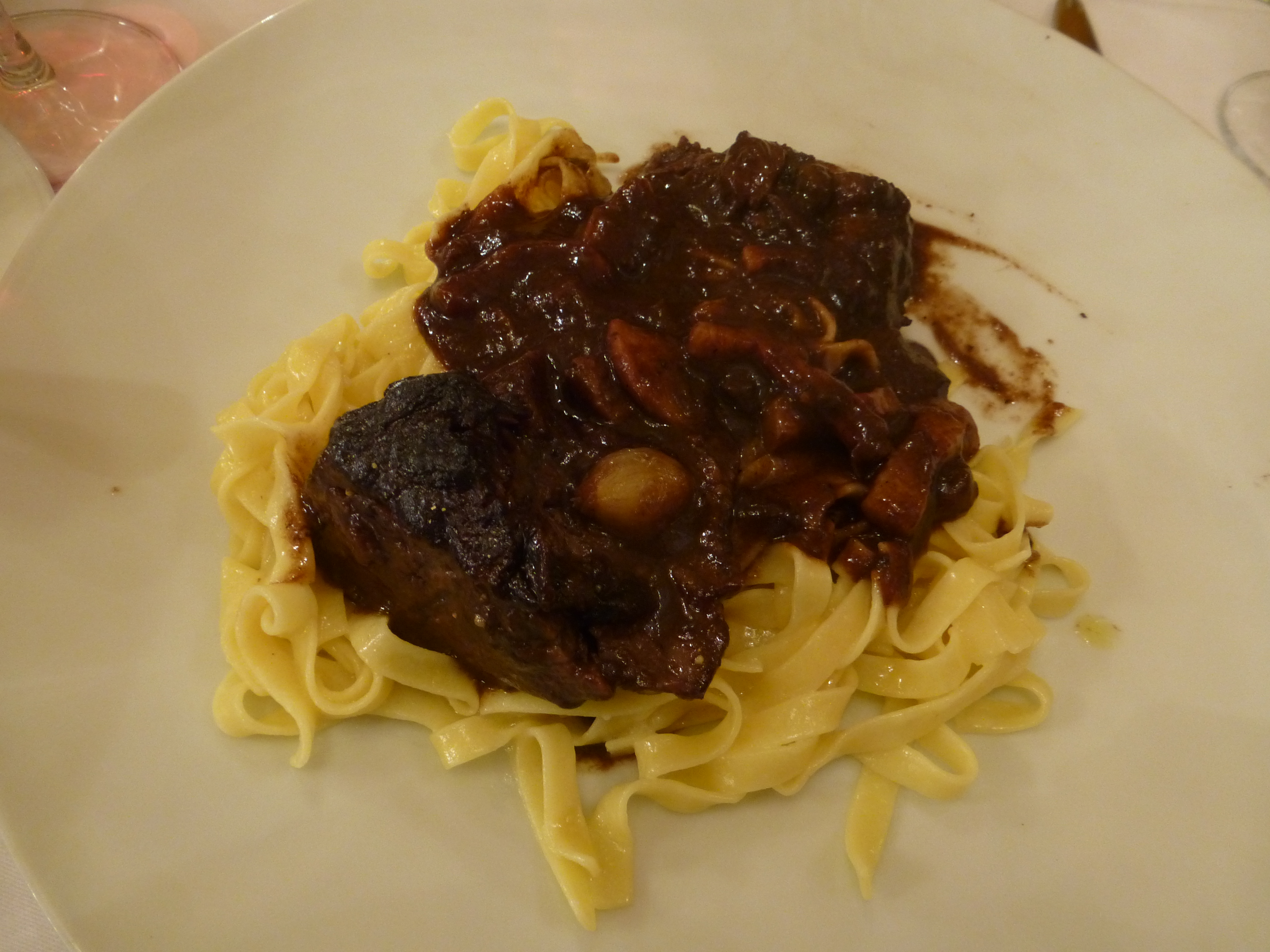 Le confit with those terrific potatoes: 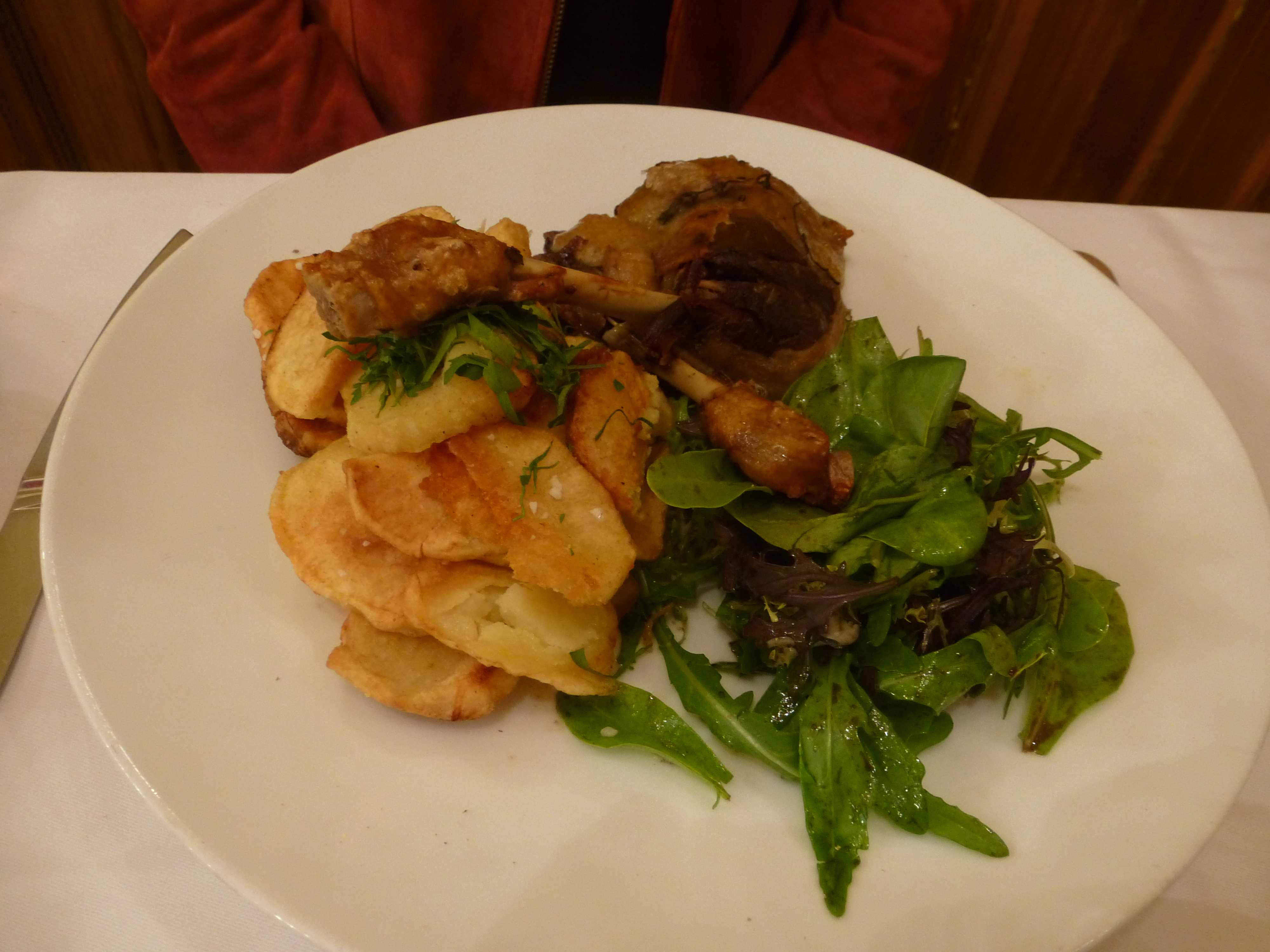 These desserts were ordered at the beginning of the meal, as they are made to order. The tarte aux pommes was huge—more than half the size of a plate, and served piping hot: 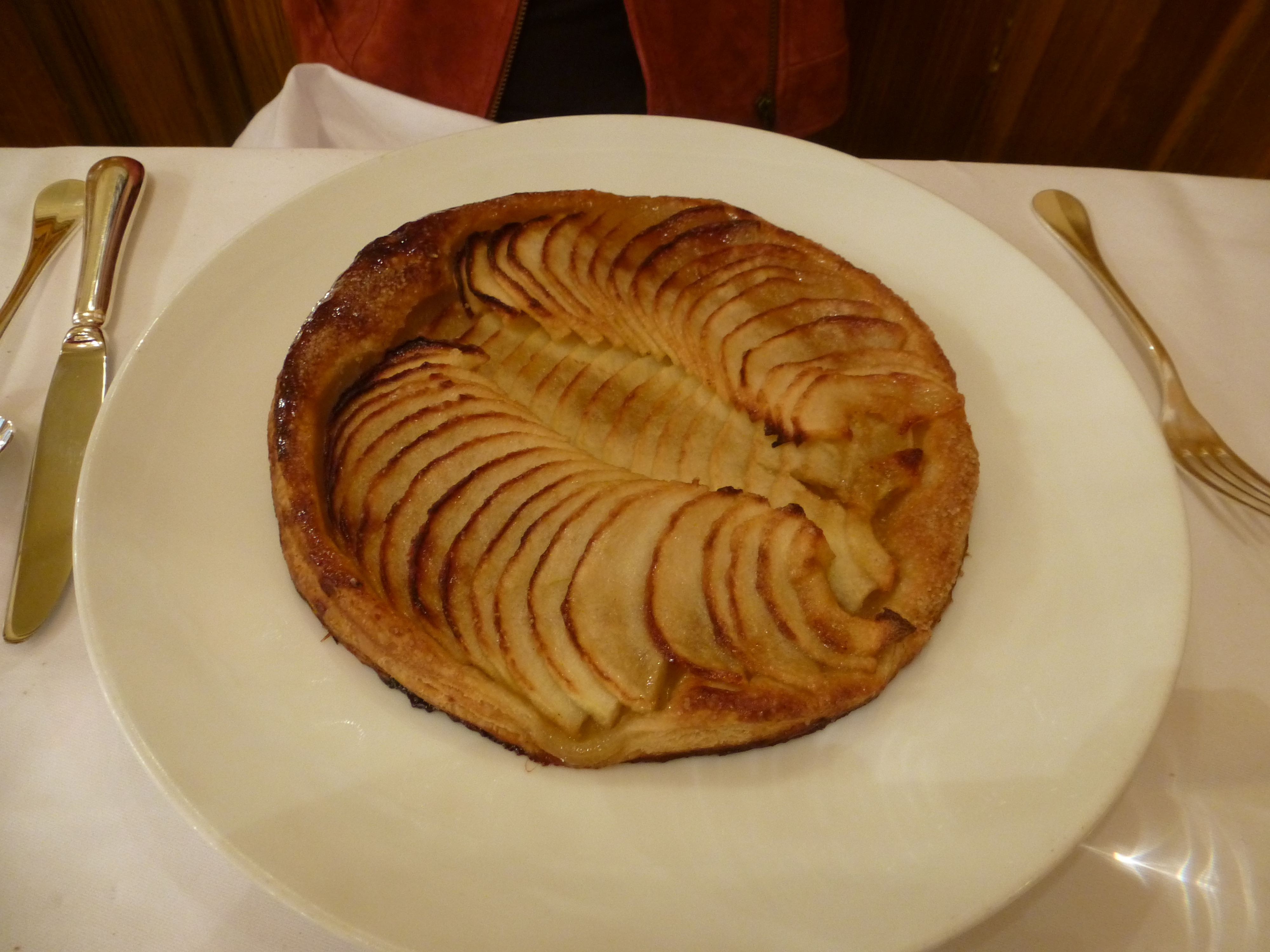 The most famous dessert at Chez Dumonet is the Grand Marnier souffle, which comes with a glass of the liqueur to pour over the hot souffle. It was as good as it looks, and I scraped every bit of the sugary crust from the side of the dish: 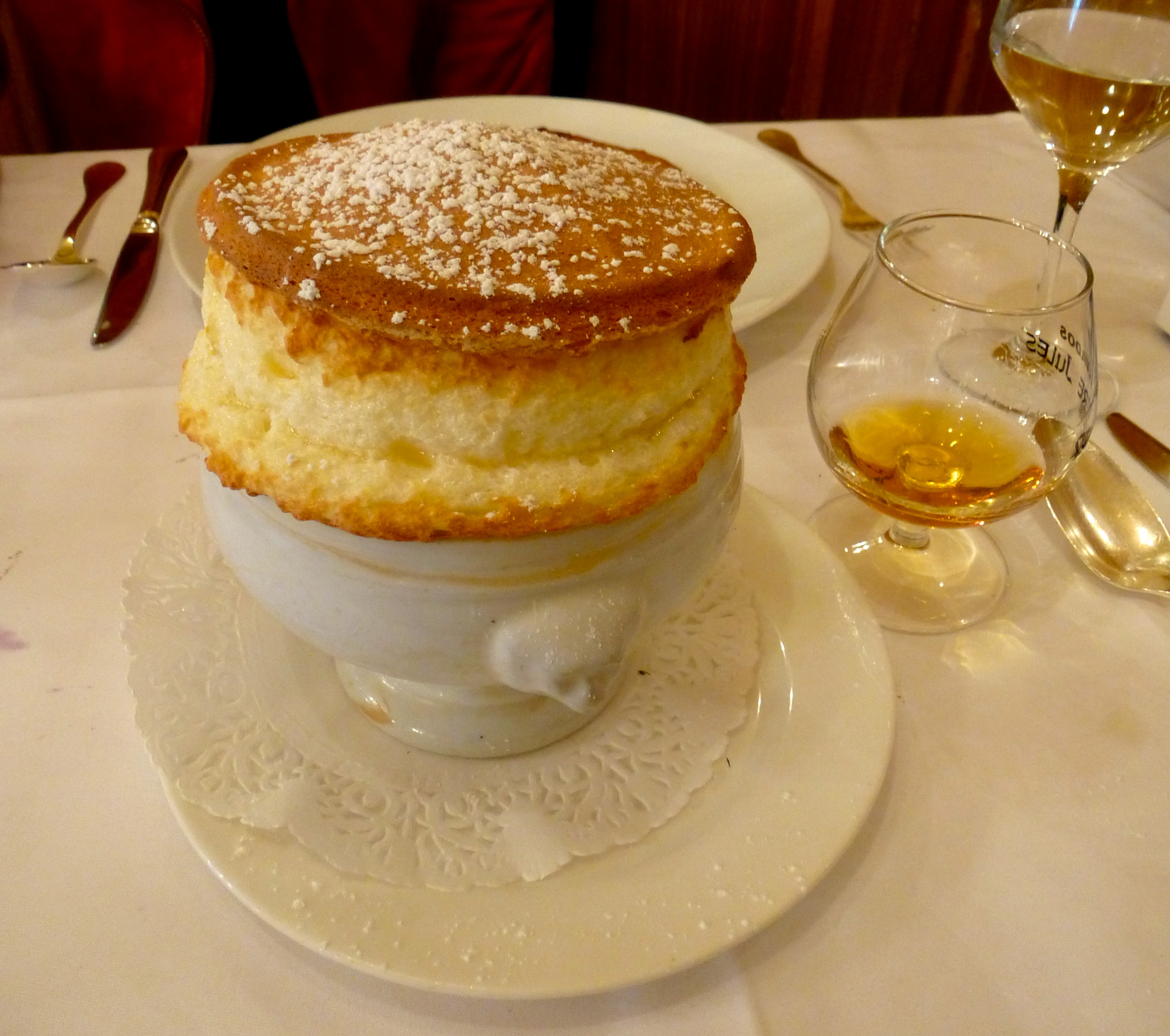 All of this was consumed with a full bottle of Moulin-à-Vent, a species of Beaujolais. Even though two of my courses were half portions, this put me into a food coma, so that I collapsed at 5:30 pm after the walk back to the hotel and essentially did not stir until the following morning. Even the long walk home didn’t manage to pep me up.

On the walk back home, as is the case on every walk in Paris, you pass wonderful old buildings like this one: 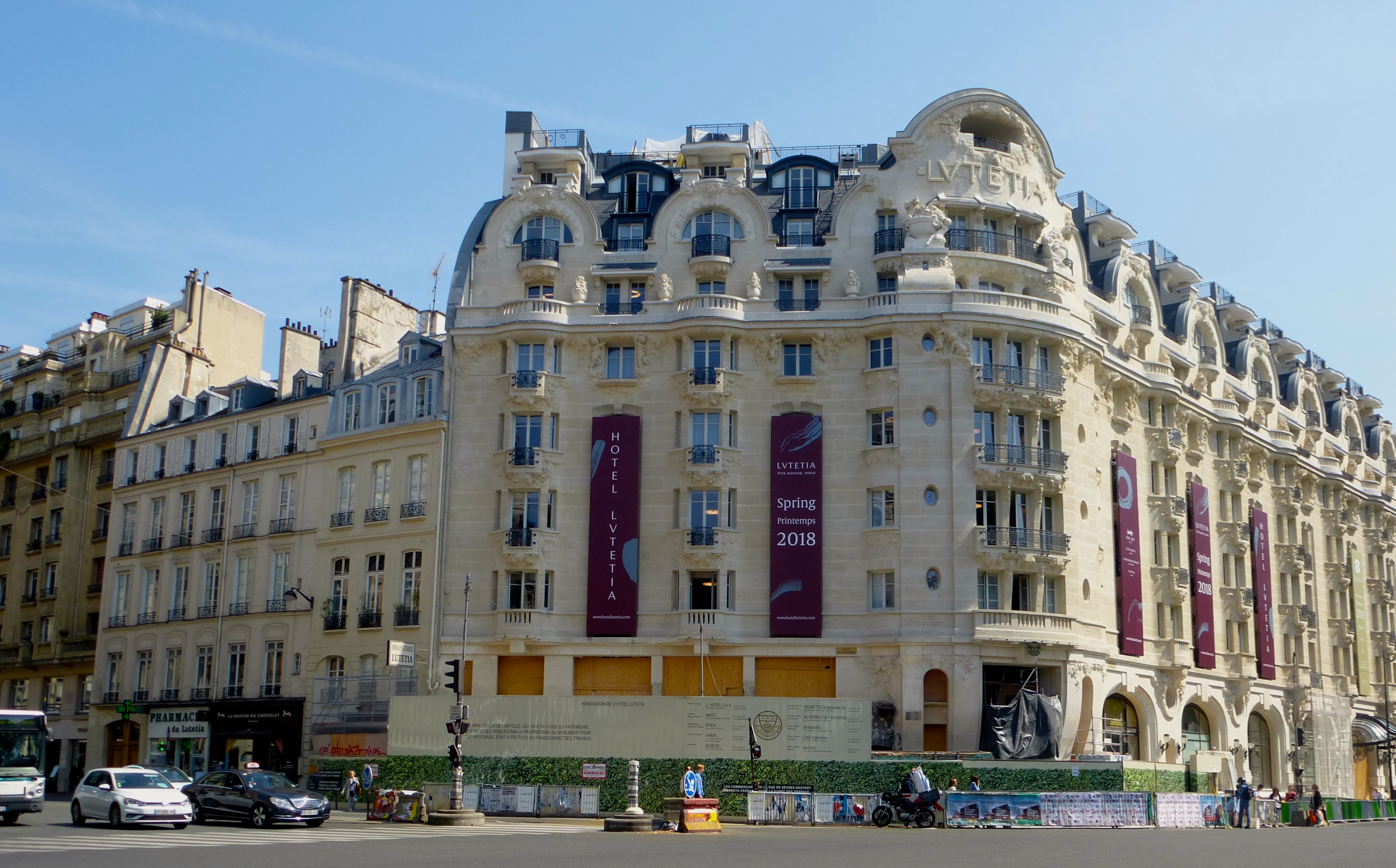 Here’s the famous cafe Les Deux Magots, now a fancy place but once the haunt (along with its neighbor, the Cafe Flore) of great writers. As Wikipedia notes:

Now it’s a high-toned place patronized by wealthy French and tourists trying to capture some of that Sartre-ian ambience. I’ve never had a drink here, but the people-watching, which is the real point of a cafe, must be fantastic: 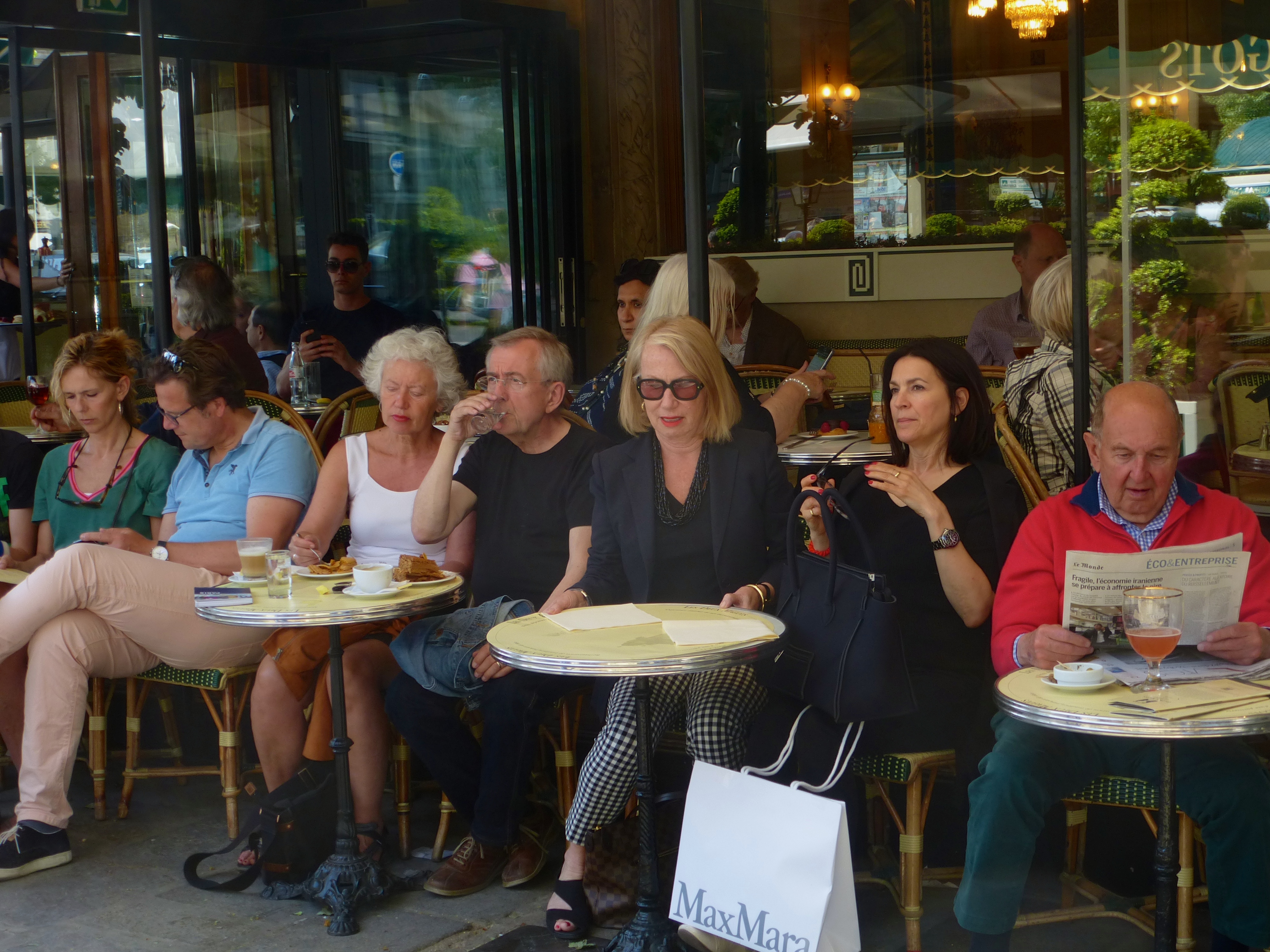 It’s no wonder that the great New Yorker journalist A. J. Liebling called his account of his youth in this town Between Meals: An Appetite for Paris (it’s one of the world’s great food memoirs). Bon appetit! 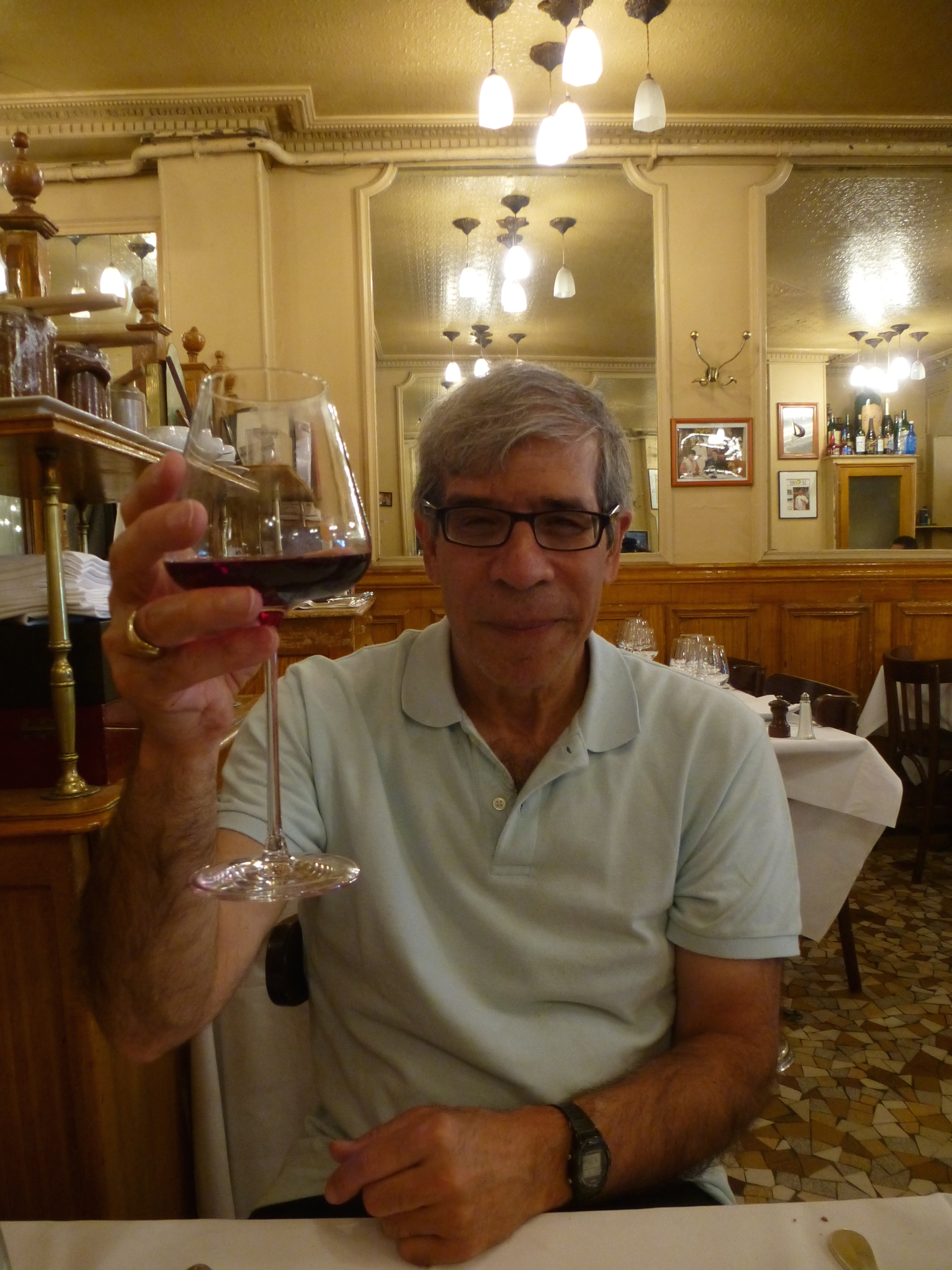