The routine here is becoming settled: wake up, shower, have a cafe au lait, do an activity (art exhibit, etc.), eat lunch at 12:30 in a nice bistro, go into a food coma, take a long walk, and then go back to the hotel for an early evening.

But this report deals with yesterday’s activities, which involved no visits to Museums but a late awakening (jet lag) and a trip out to the Rue Malar in the 7th Arrondissement, not far from the Invalides.

On the Rue Malar resides what was once one of my two favorite bistros in Paris, L’Ami Jean, run by Stéphane Jago and famed for superb food at reasonable prices. When I’d go to Paris for a week, I’d simply reserve alternate day lunches at L’Ami Jean and Chez Denise.

But I haven’t been back to L’Ami Jean for eight years. In the meantime, it’s gotten a spate of publicity, not the least from Adam Gopnik, who sang its praises in a New Yorker article about Parisian food (free at the link). Would it survive the inevitable onslaught of Americans that would ensue? (Of course I’m a tourist, too, but I considered the place my own discovery.)

Short answer: NO. First, though, here’s a cute scene from the walk to the restaurant: two Paris cops getting lunch. In America they’d go to McDonalds or stop for a donut; in Paris they stop at an artisanal boulangerie for a custom-made sandwich. At first I thought they were checking out the place for crime, but they were just getting lunch. 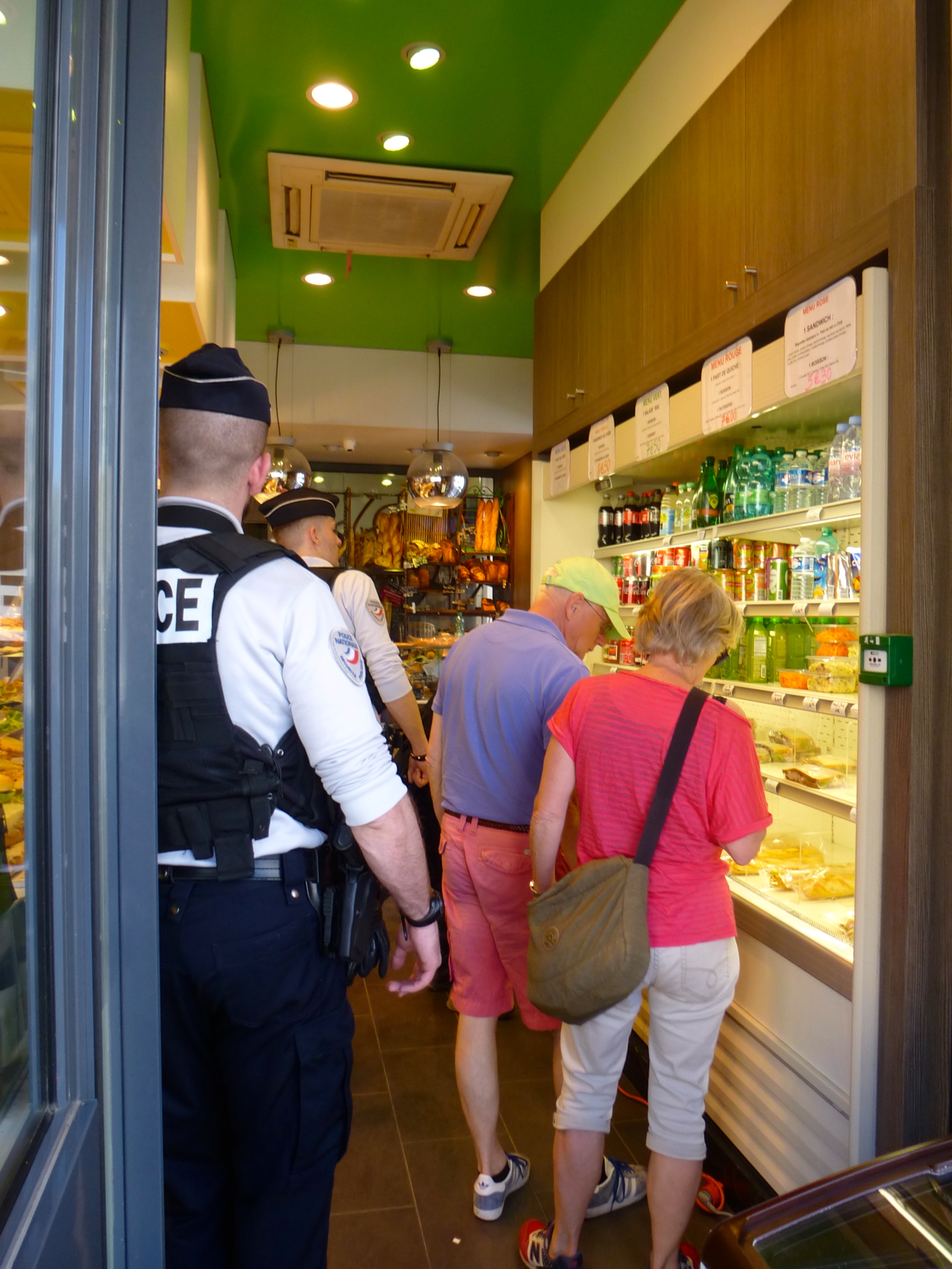 The unprepossessing entrance, behind which used to lie gastronomic paradise: 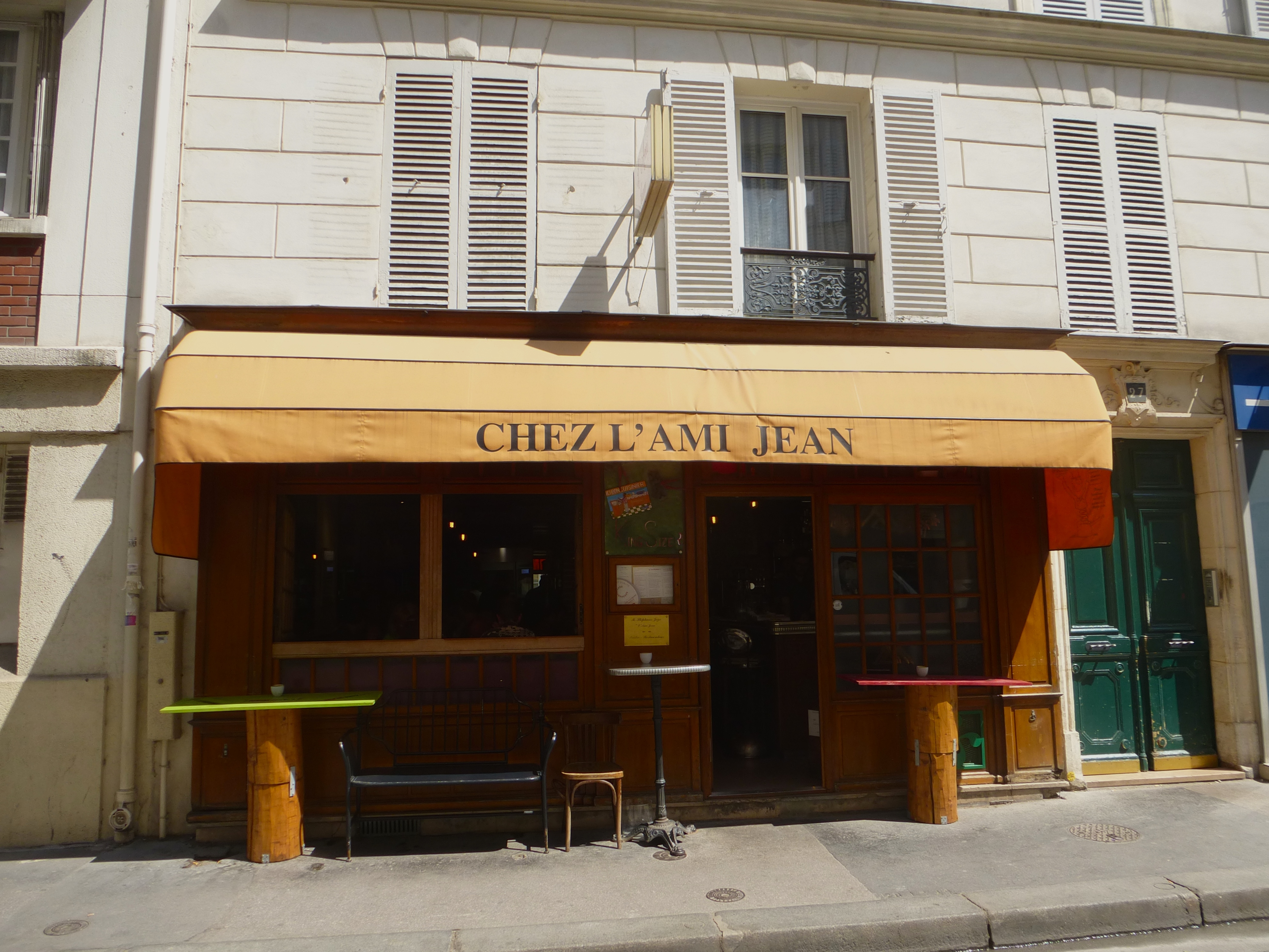 I asked for Table #5, which I had eight years ago. I like it because it’s in the center of the restaurant, against the wall, and above all has a cat picture hanging above it. I showed that picture in a post eight years ago and noted this:

Here’s a cartoon, drawn on a napkin, hanging on the wall.  On the top left the cartoonist has autographed it to the restaurant and the chef, Stéphane Jégo.  The about-to-be consumed mouse is saying, “I give my body in the cause of gastronomy.” [Note the cat’s dangling genitals.]

Matthew explained to me who the cartoonist was (actually, there are two of them):

Here’s your cat-alogue of info about your drawing. He is simply called LE CHAT and he (or rather his author) is BELGIAN and not French. Le Chat is also pretty funny most of the time, although the humour is based on some pretty dire puns (see example pasted below). HOWEVER, looking at it closely, I see that there’s some rather puckish humour going on here.

The top cat (as it were) is indeed Le Chat, drawn by Philippe Geluck. The scabrous underneath is drawn by Siné, veteran French cartoonist with a sulphorous reputation who in the 50s made his mark with his own book of cat drawings, which we used to own, called (in English) Scatty. Here’s one of his – similarly daft puns, this one is of course a pas-chat. [JAC note: “pasha”]
Here‘s a link to the Sine book in English with the cover and a couple of examples.

This is me, back again eight years later: 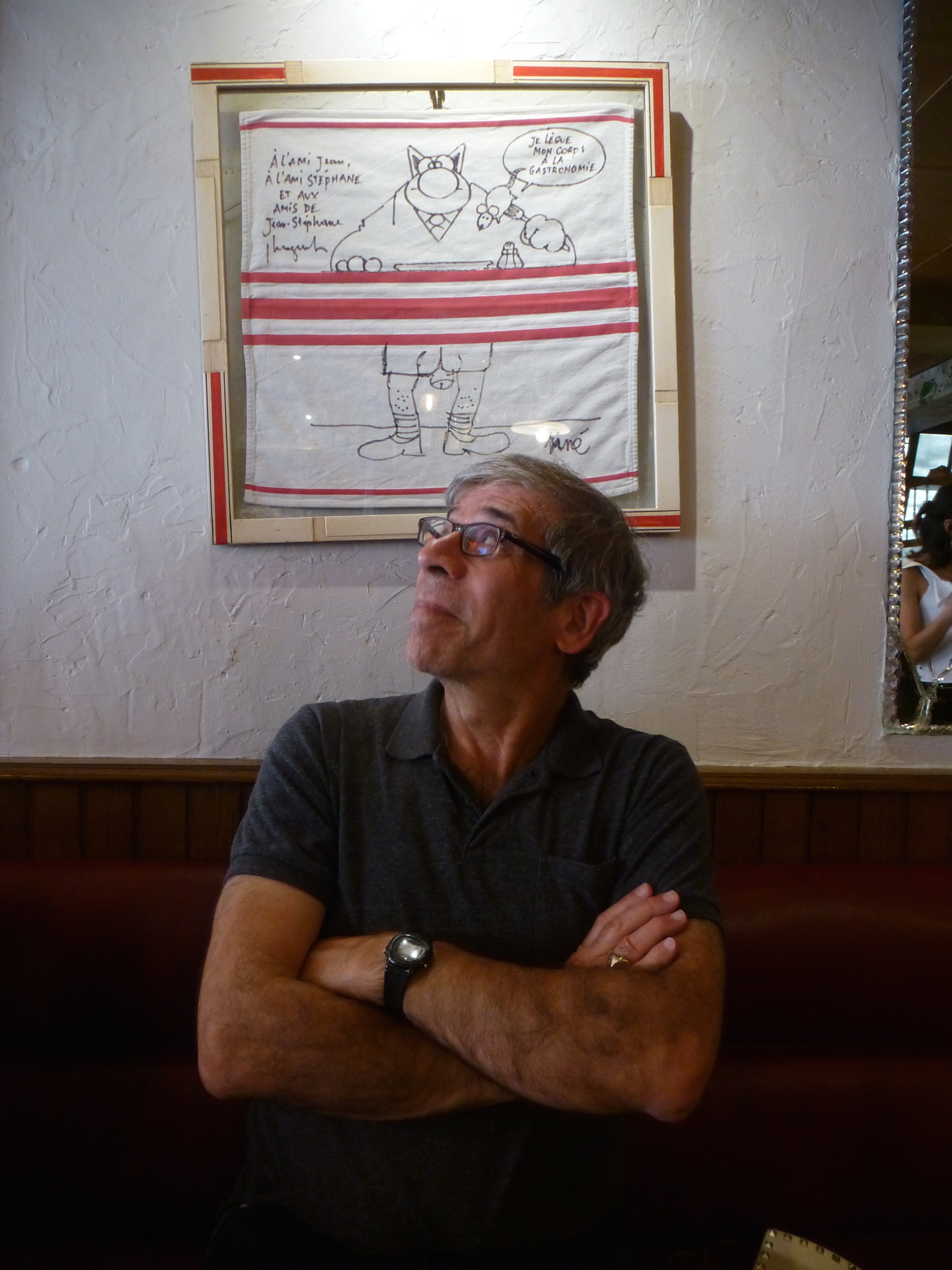 I got the prix fixe “business lunch”, which was 32 Euros, along with a bottle of decent but inexpensive wine. First course: cream soup with fennel, which began with a presentation of the croutons and crunchies at the bottom. 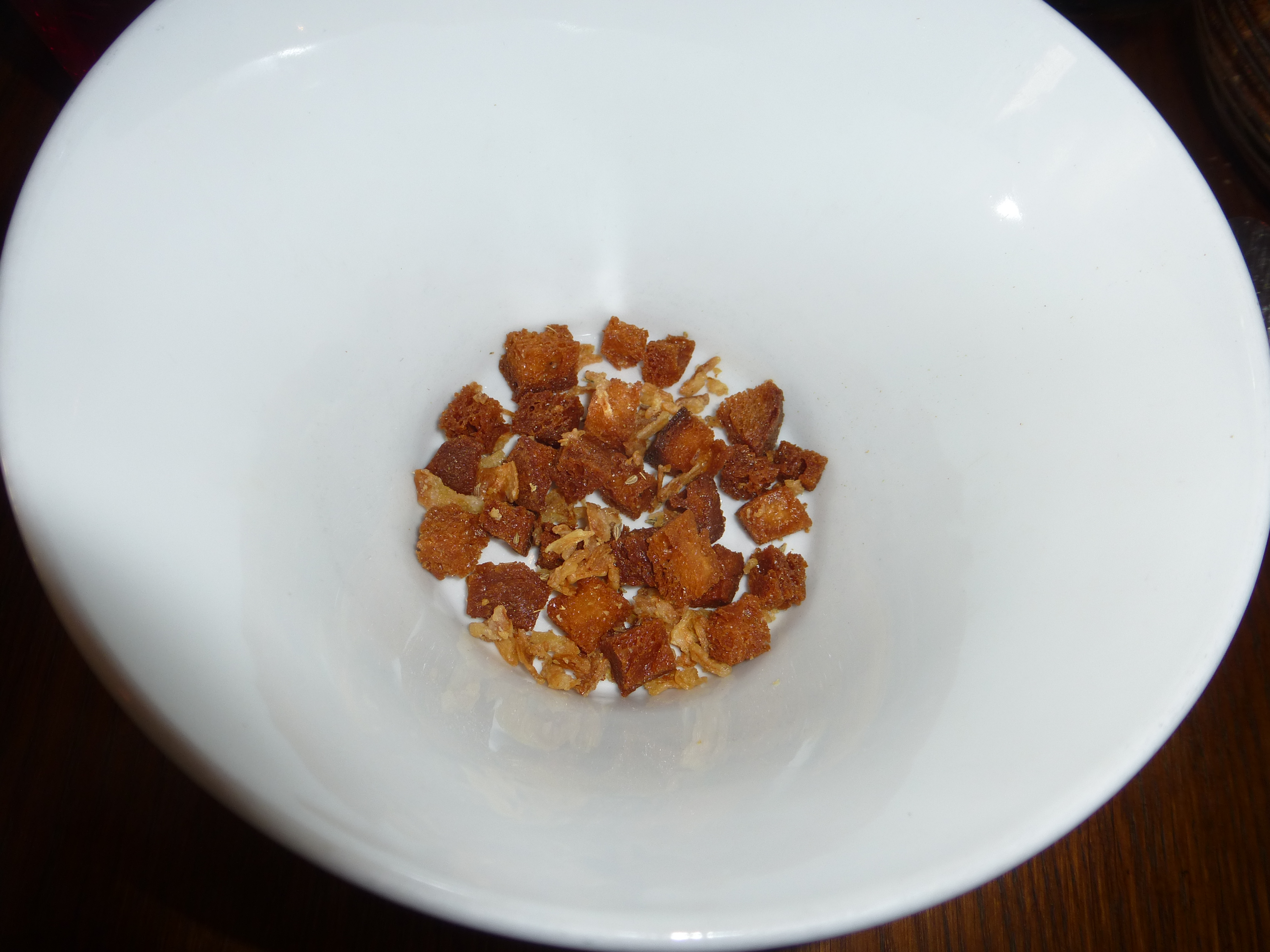 Then a decent amount of rich soup, which failed because it tasted only faintly of fennel, and was mostly cream. 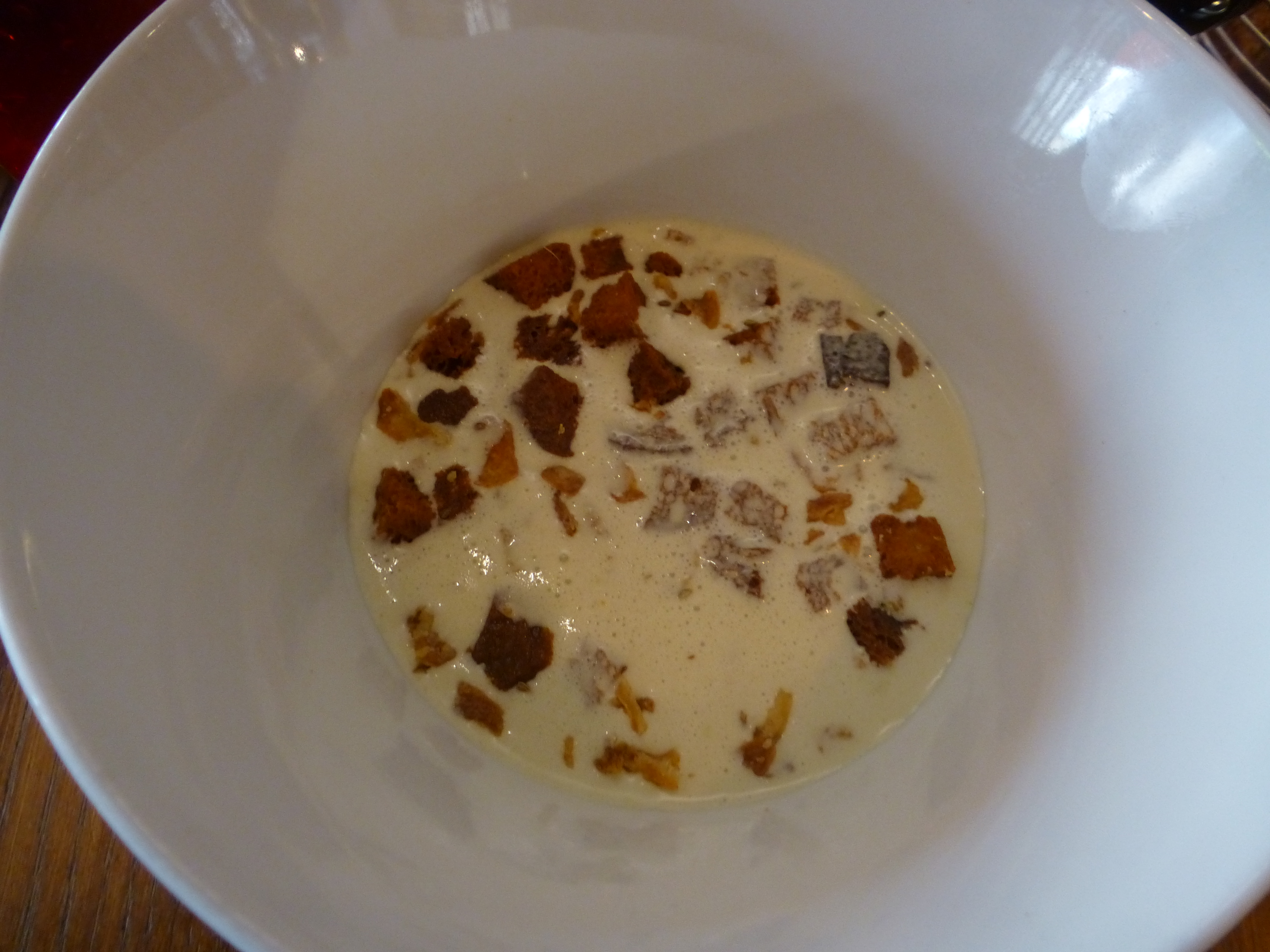 Second course: a decent piece of mullet on a small bed of vegetables. I’m not much of a piscivore, so I’ll just say that it was okay. 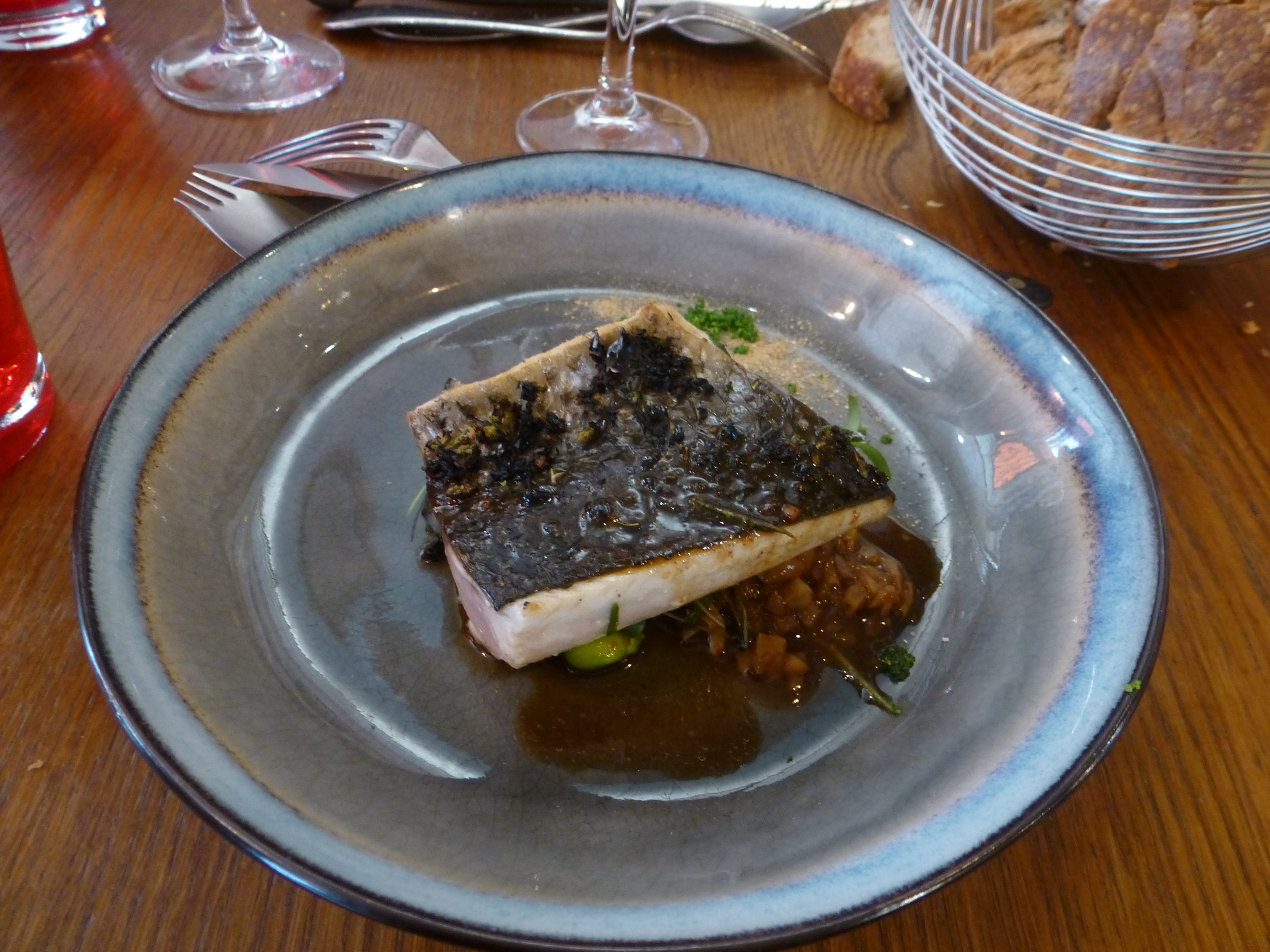 Third course: a piece of beef (rare) with a carrot-potato puree, and on the side mashed potatoes and a replica of the main course: a “vegetable” dish with carrots, mushrooms, cream, and greens.

The beef was simply too tough, and I’m used to eating beef “saignant” (bloody) in France. It was not nearly as tasty as the beef I had the previous day at Chez Denise. 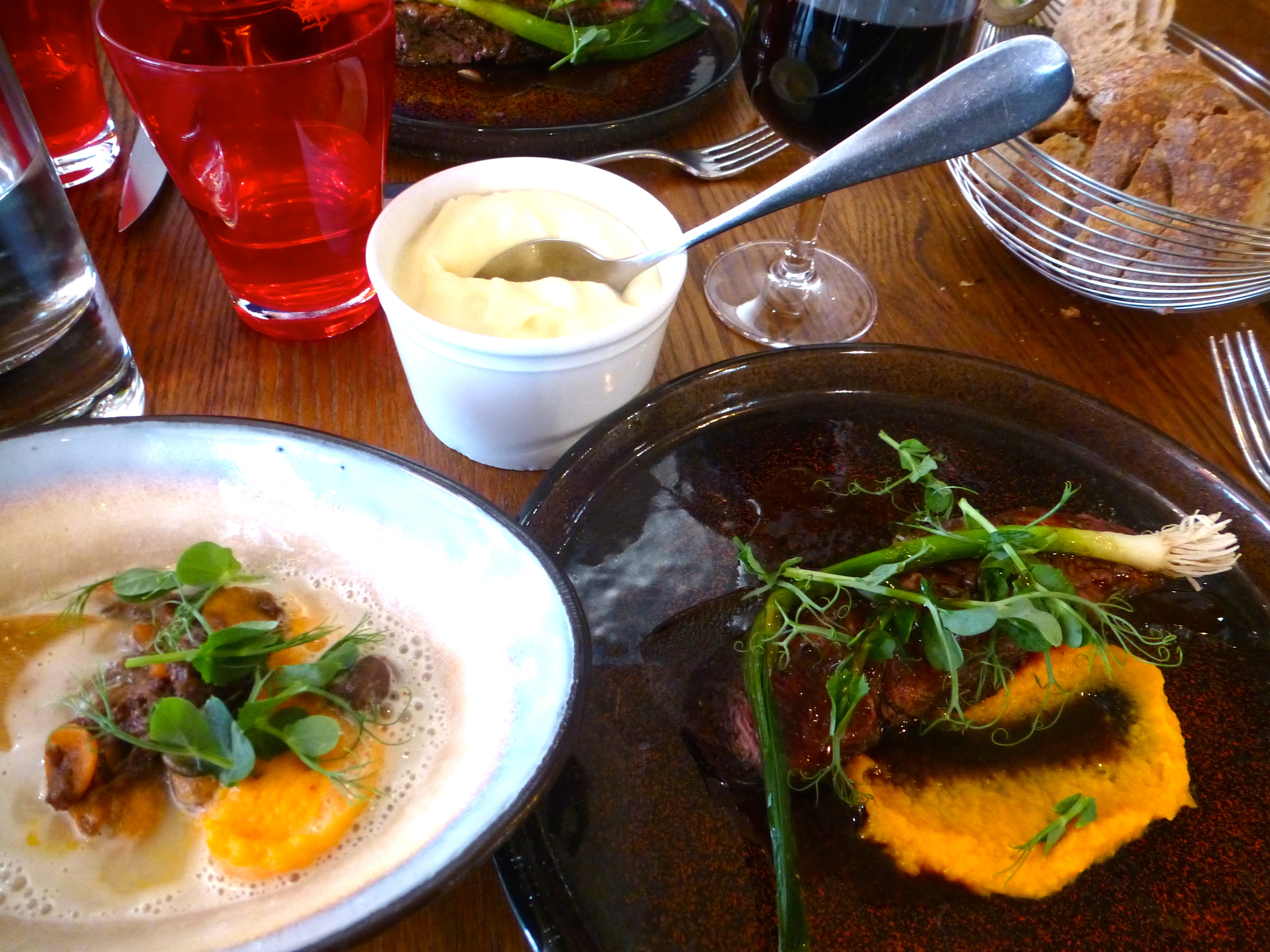 Really the best dish of the meal was the side of “vegetables”, which was quite tasty: 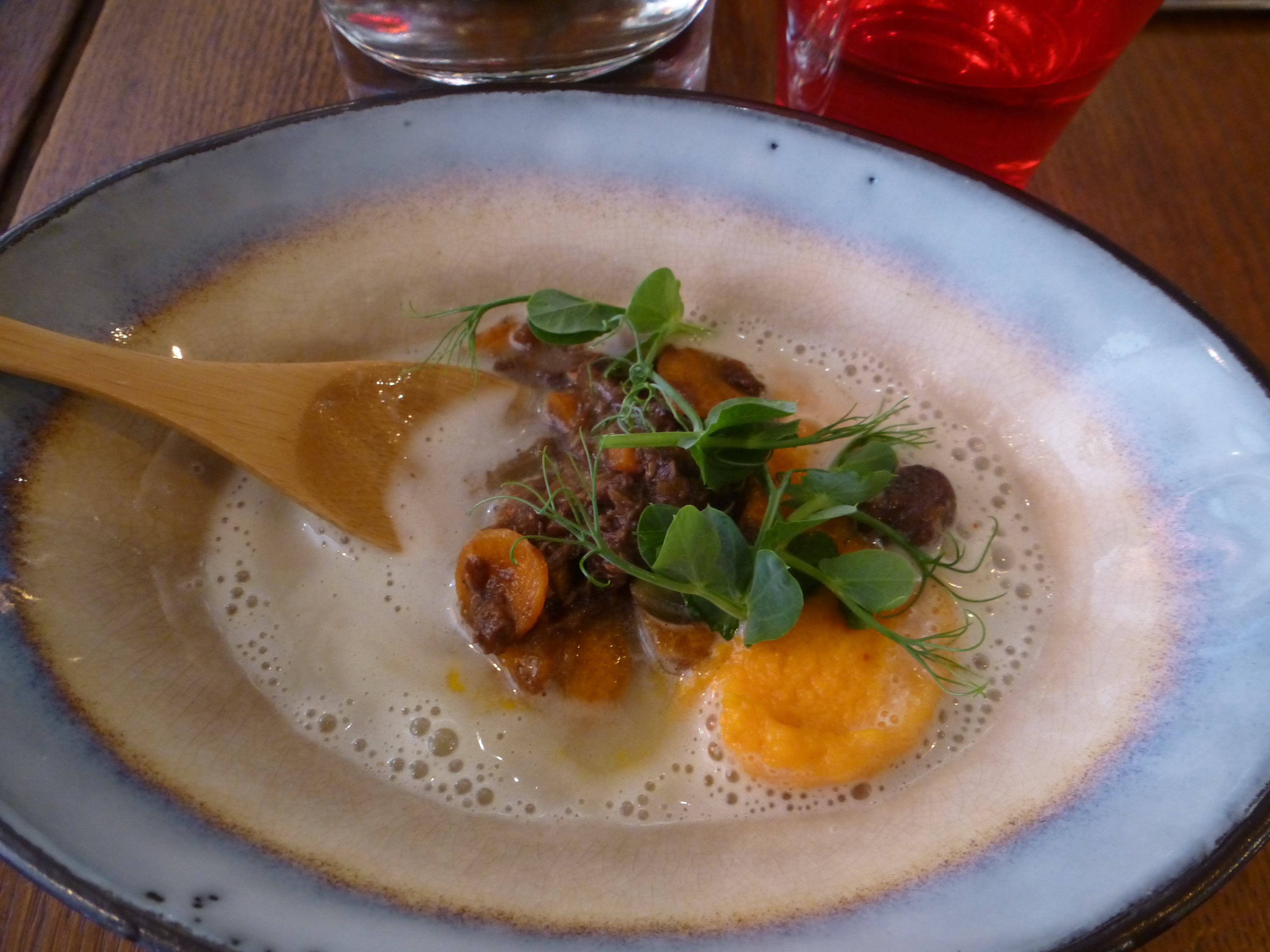 My favorite dish at L’Ami Jean used to be riz au lait, or rice pudding, which they served in a huge bowl that they simply left on the table for you to take as much as you wanted. On the side were small bowls of five or six garnishes: pralines, nuts, fruit, and various goodies (see here for the good old days).

Those days are gone. You get an individual portion of rice pudding served over a dollop of salted caramel ice cream and praline. When I asked what happened to the all-you-can eat bowl with garnishes, I was told they don’t do that anymore. 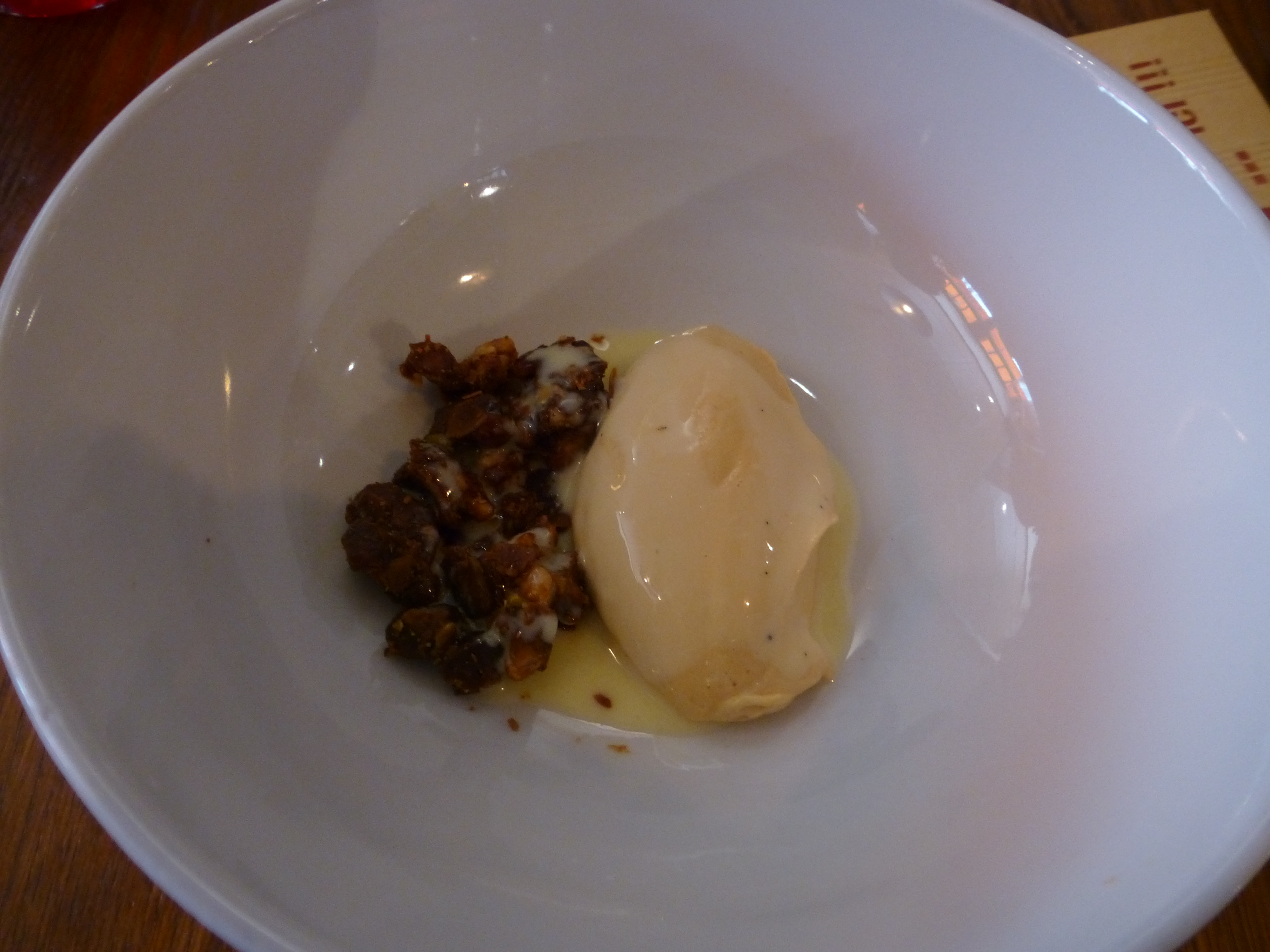 A great pity. . . and the pudding just didn’t taste as fantastic as it used to, as if they left out eggs or something. 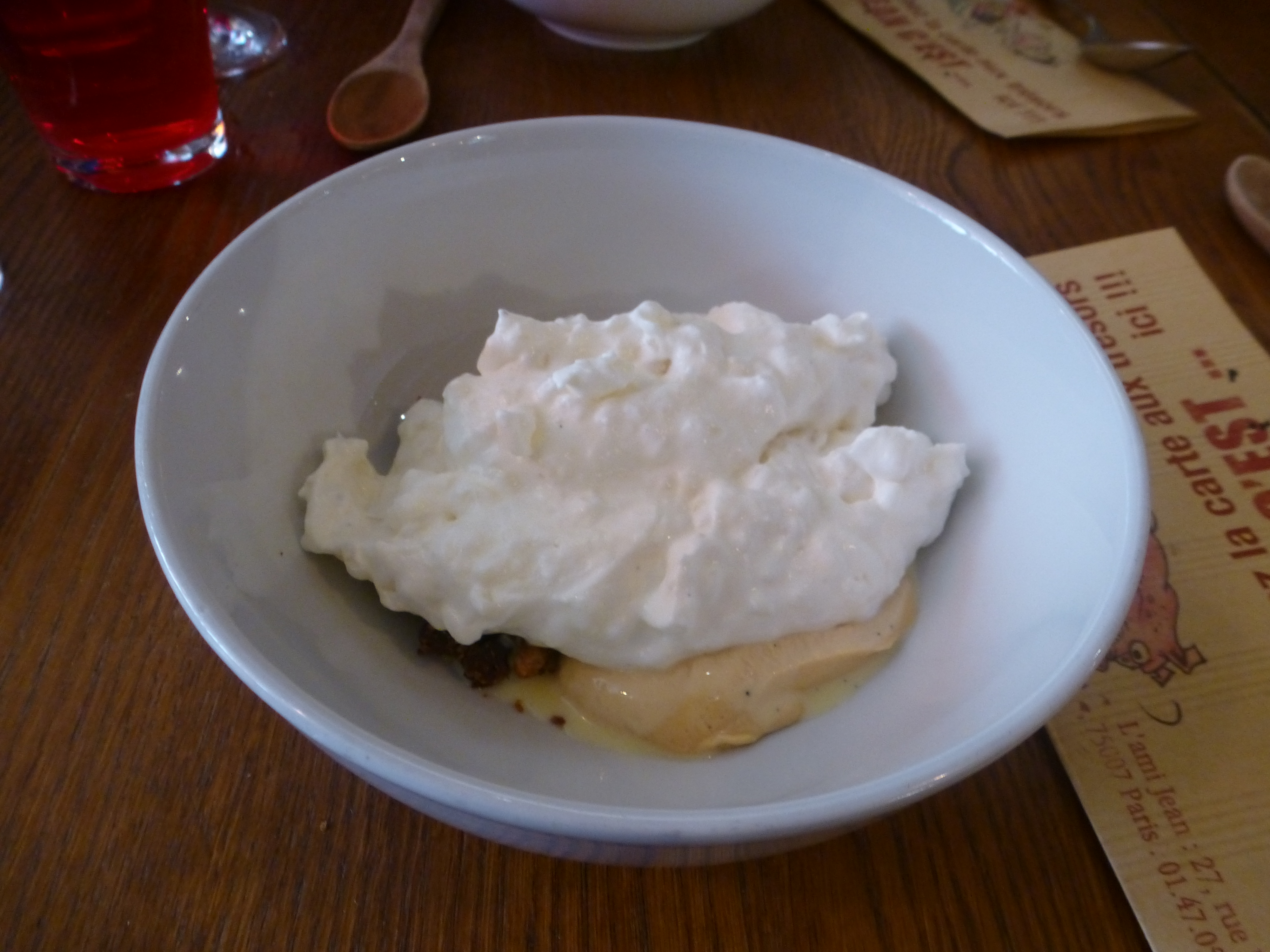 I will not be going back to L’Ami Jean. I tasted another dish, cote de porc (pork roast) that the couple at the next table proffered because I asked them how it was. It looked great, but lacked flavor.

I am not sure why this restaurant has declined, but of course I am judging by only one meal. Nevertheless, I never had a mediocre meal there before yesterday. I suspect it’s a combination of a big influx of foreigners who don’t need to be kept happy like repeat local customers, and perhaps rising prices and the tendency of the French themselves to avoid big lunches eaten out on weekdays (even though yesterday was a holiday).

A view from nearby; it’s a lovely area between the Eiffel Tower and the Champ de Mars: 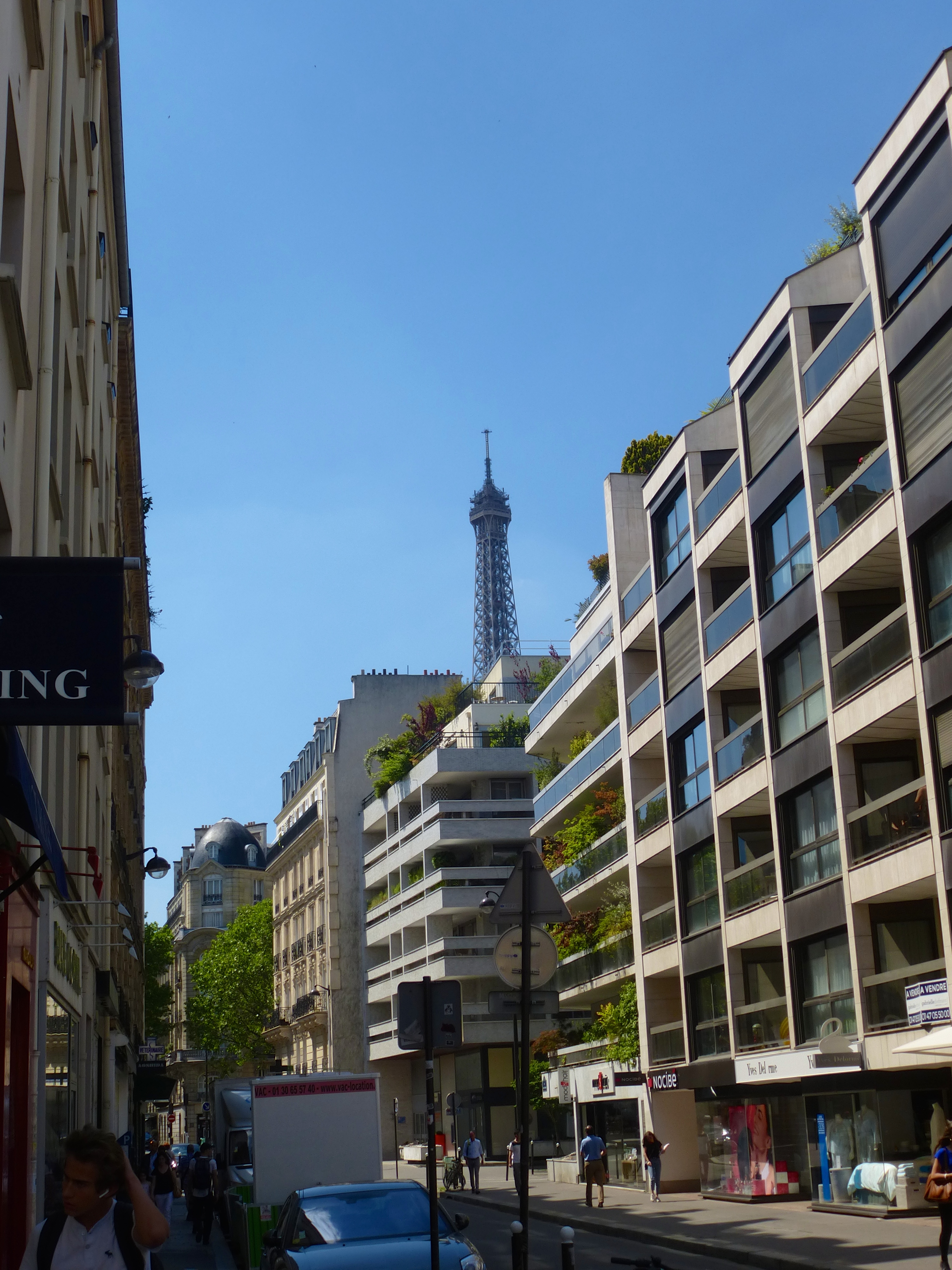 A lost cat poster on the walk back. The tattooed and castrated moggie appears to be named “Papi Louka”: 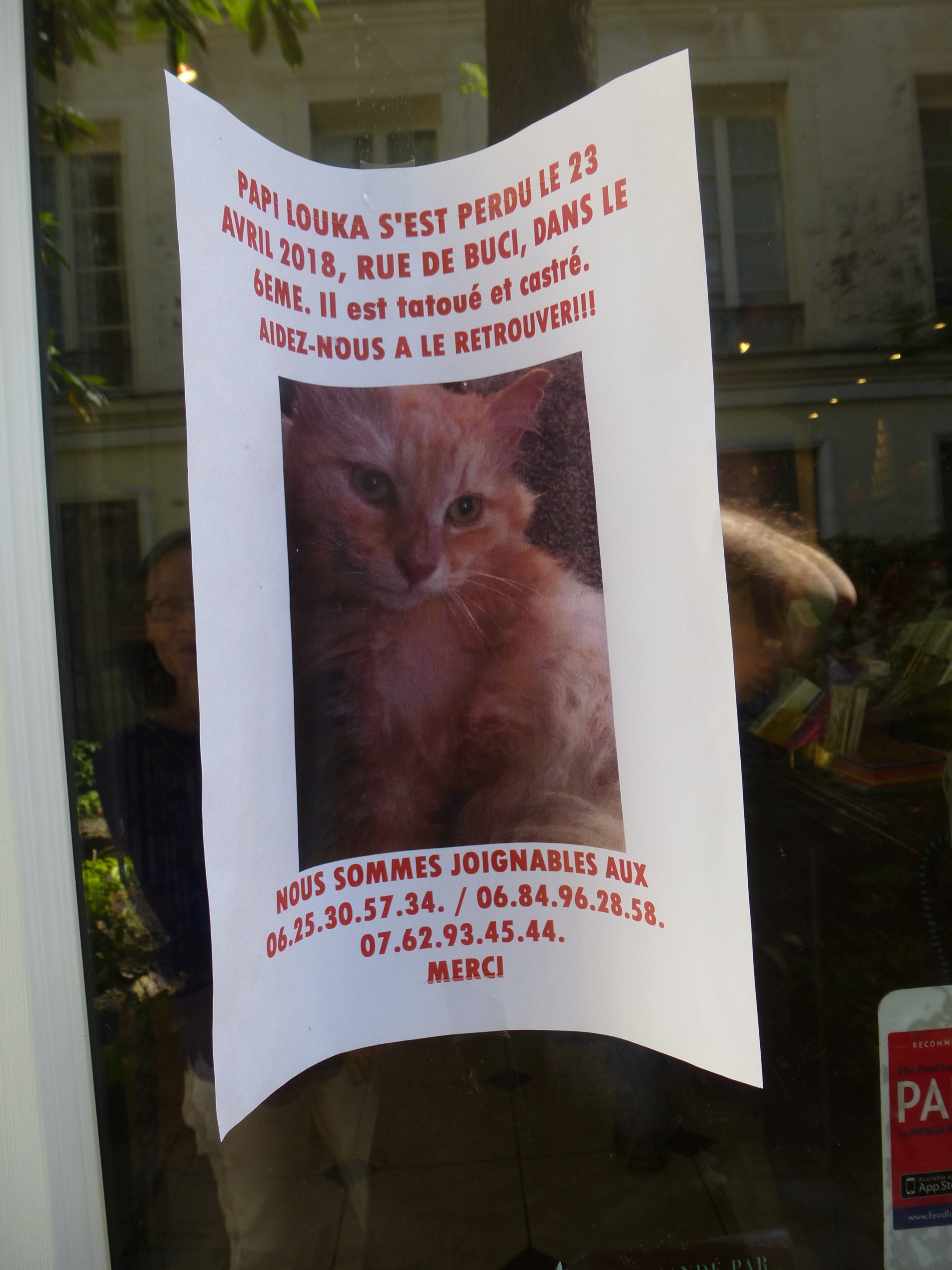 A stop for a cold drink in my favorite cafe, which was my local cafe when I lived on the Rue Jacob. It is or was an artists’ cafe called La Palette (the bar is decorated with used artists’ palettes. This woman had the right idea: buy a bottle of wine and sit there for hours reading a book. But you can simply buy a coffee or any other drink and stay as long as you want. You won’t get the bill until you ask for it. 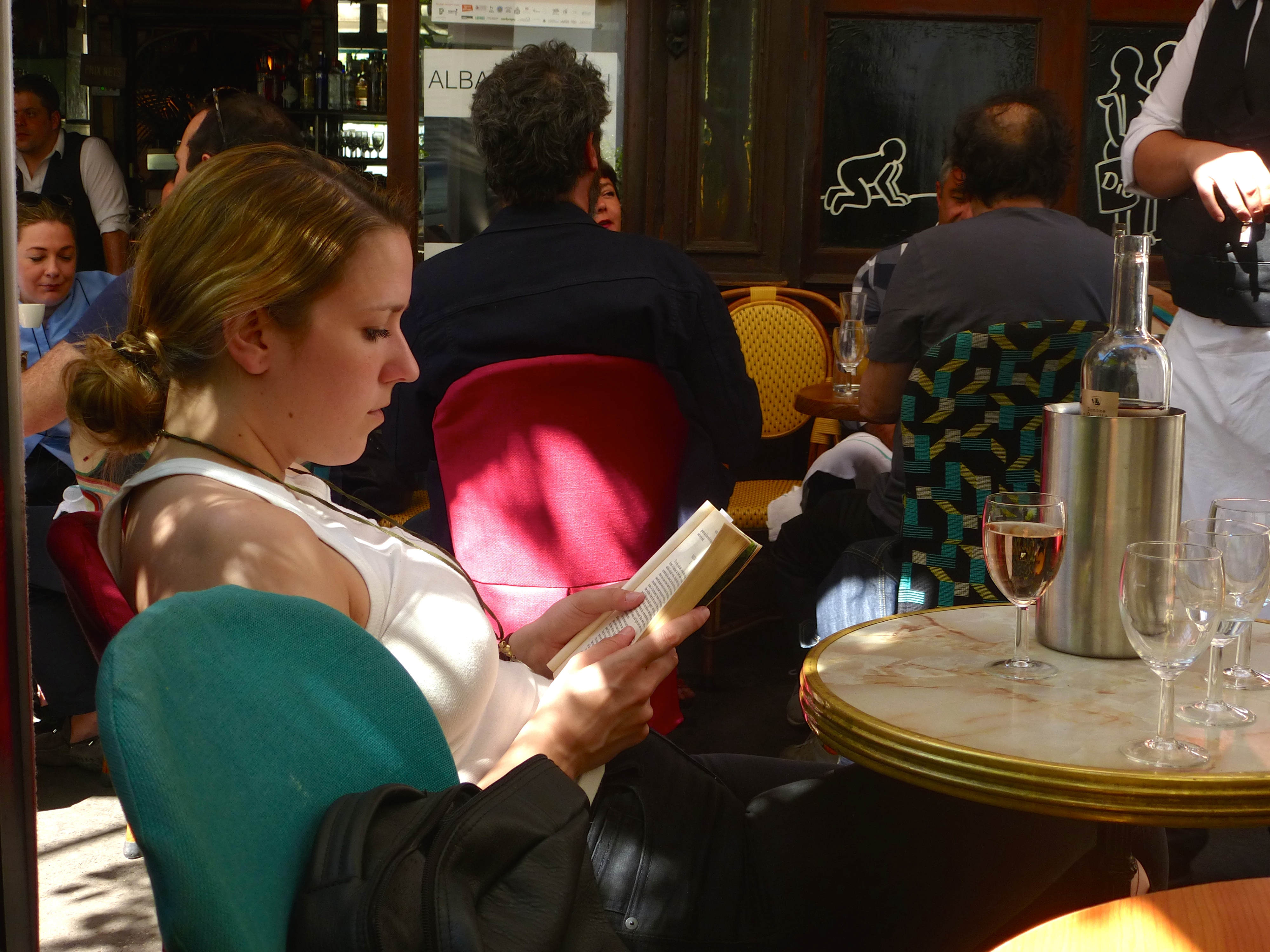 My favorite view in all Paris is from the pedestrian bridge Pont des Arts, which spans the Seine between the Institut de France and  the Louvre. In the middle you get this lovely view of the Seine, with the Pont Neuf in the distance and the spire of Notre Dame peeking above the greenery. The bridge was built between 1802 and 1804, collapsed when a barge hit it, and was rebuilt to the same design between 1982 and 1984. What you are seeing is the Pont Neuf, not the metal Pont des Arts, which you can see here.

You can also see what a beautiful day it was, and it’s been this way for three days. 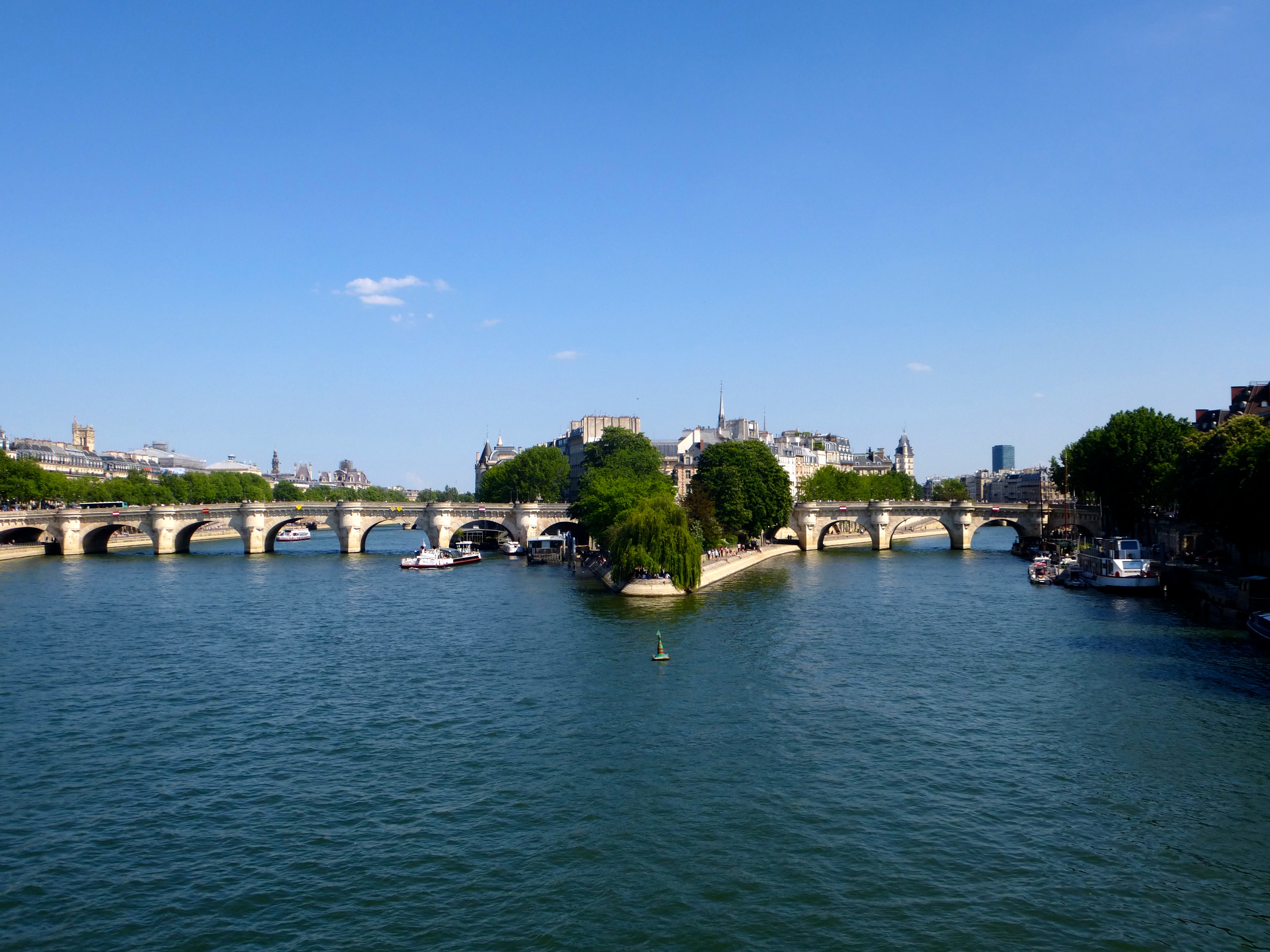 The railings of the bridge were originally a wire grate, but starting about ten years ago, lovers began writing their names on padlocks and locking them to the wire. It was a lovely Parisian thing to do, but the authorities didn’t like it. (You can read about the “Love Locks” here.) They not only saw it as unsightly, but the weight of the locks caused part of the parapet to collapse. Finally, in 2015, they removed all the locks (over a million), and there were 45 tons of them!  This is what the bridge looked like then (from Wikipedia): 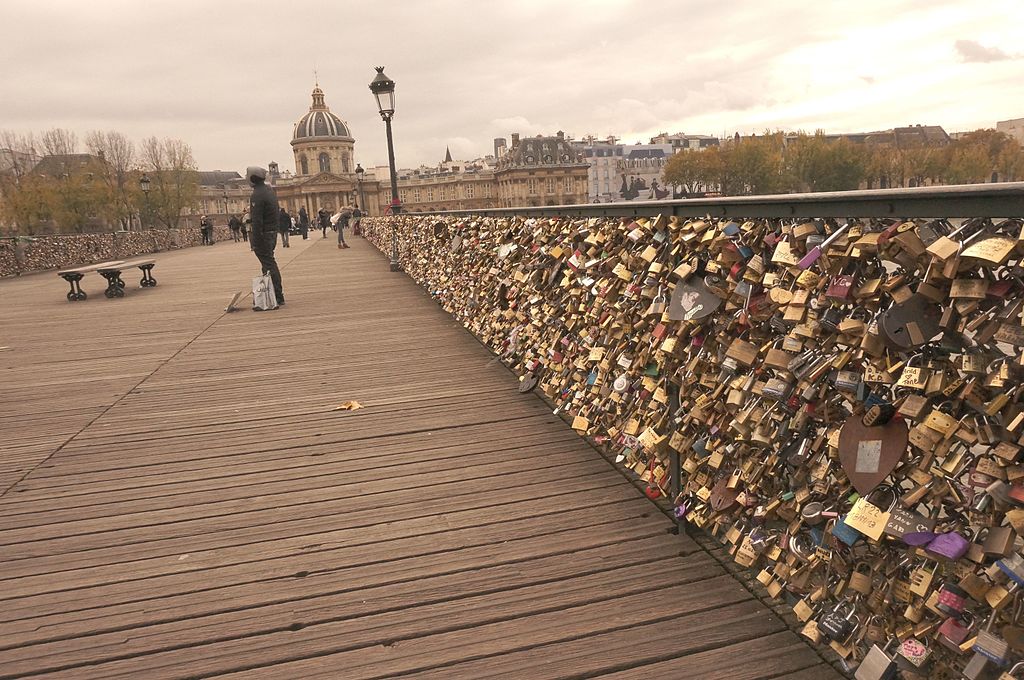 They replaced the wire grate with glass panels to stymie the lovers. But love will not be denied, and this is what people have done: 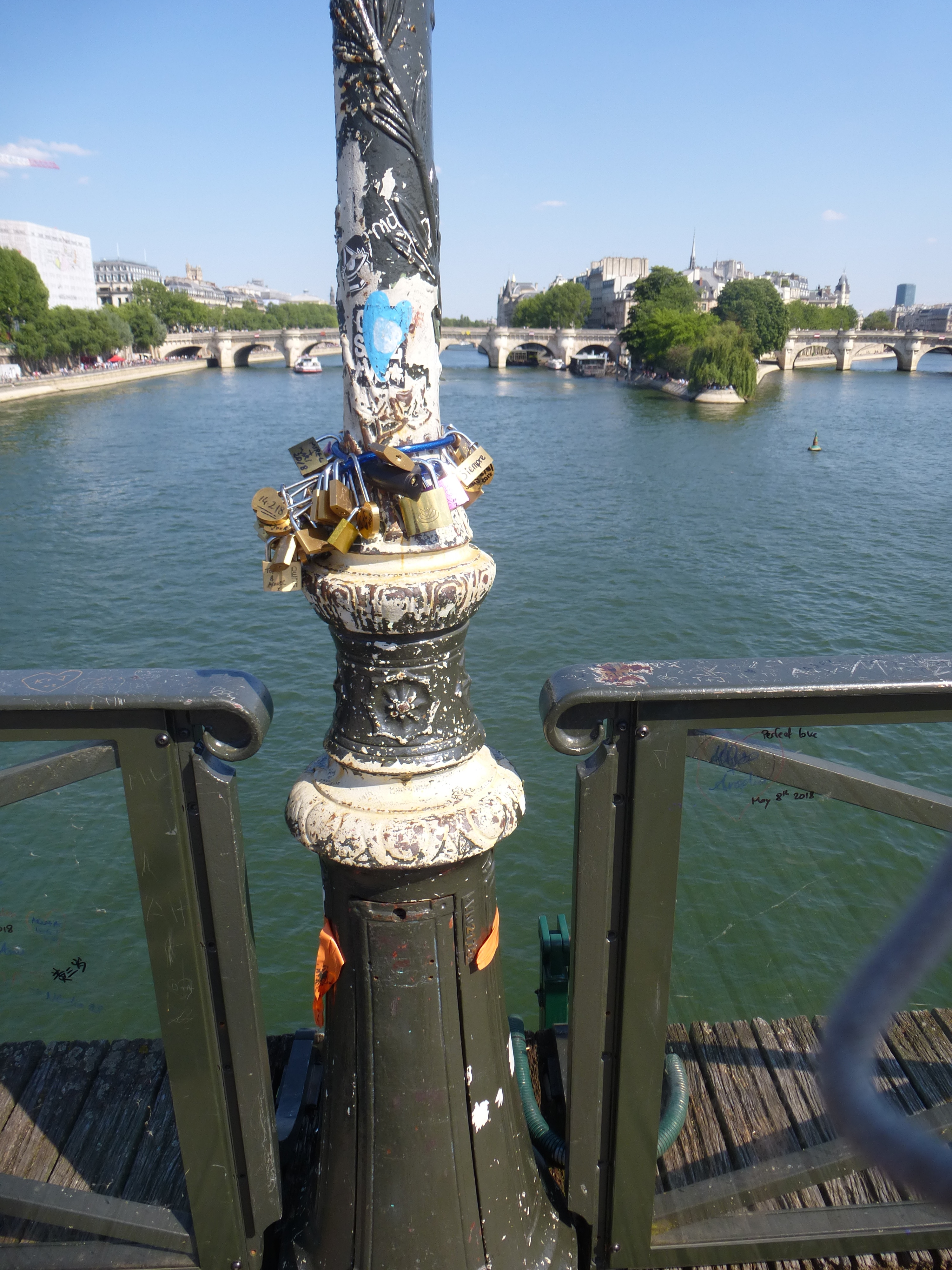 Paris: the City of Love: 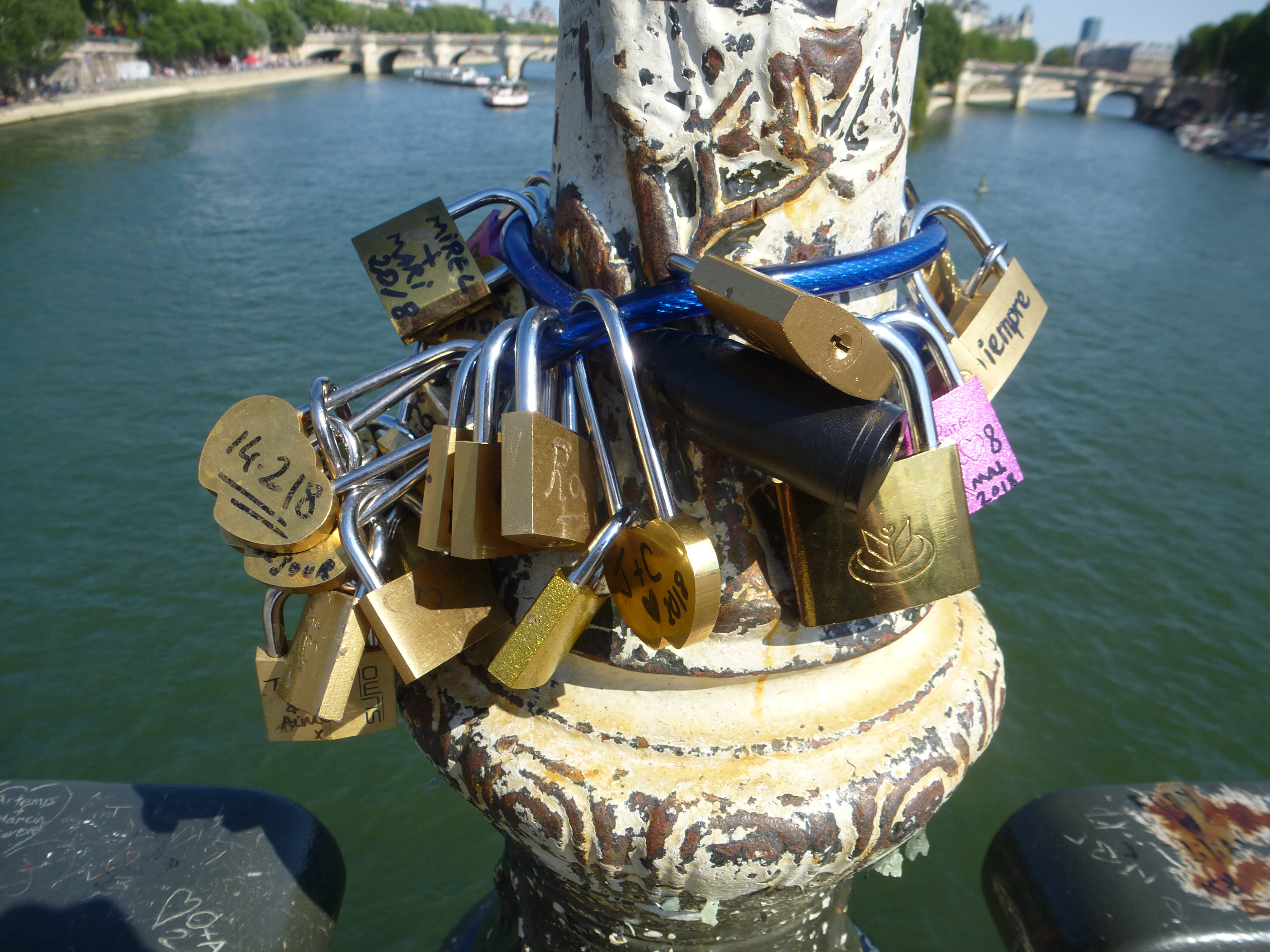