I am staying a few days at Cold Spring Harbor Laboratory on Long Island, where I gave a talk wrapping up my Sydney Brenner Research Scholarship here. My work was on how Brenner and Francis Crick, pioneer molecular biologists, collaborated together – they shared an office for 20 years and constantly talked at each other. I’ll be writing this up for a book published by the Royal Society later this year, and will let people know when the PDF is available. You can still listen to the radio programme I made about Brenner’s life, just click here.

This morning I got up early (though not as early as when I was here two years ago for the centenary of Crick’s birth) and went for a walk before breakfast. The late spring weather was glorious, and the campus was looking fabulous: 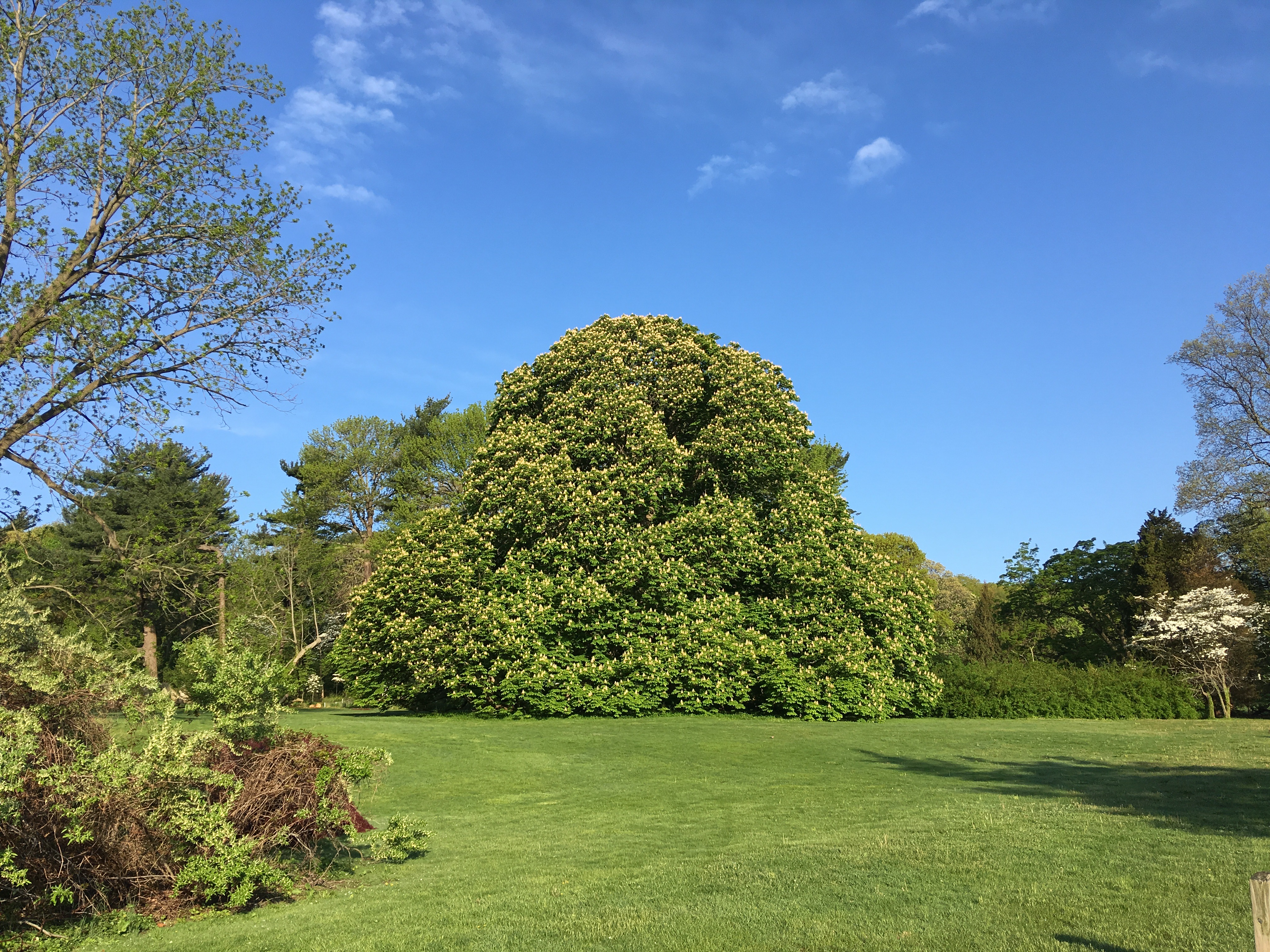 At the end of Bungtown Road, there’s a sandspit that nearly separates the two parts of the harbour. This is the view north: 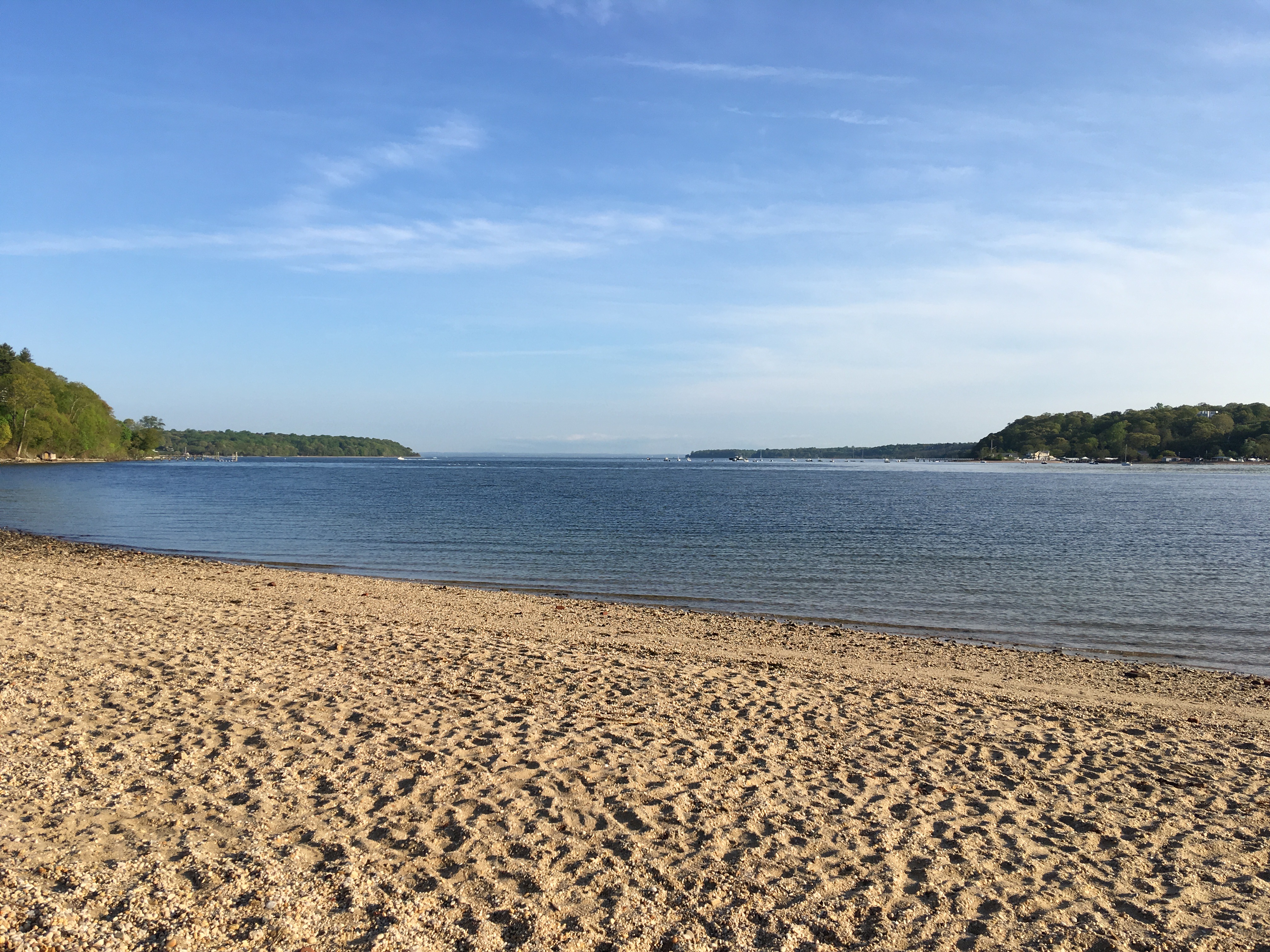 And this is the view south, looking back towards the lab, which are in the centre of the photo: 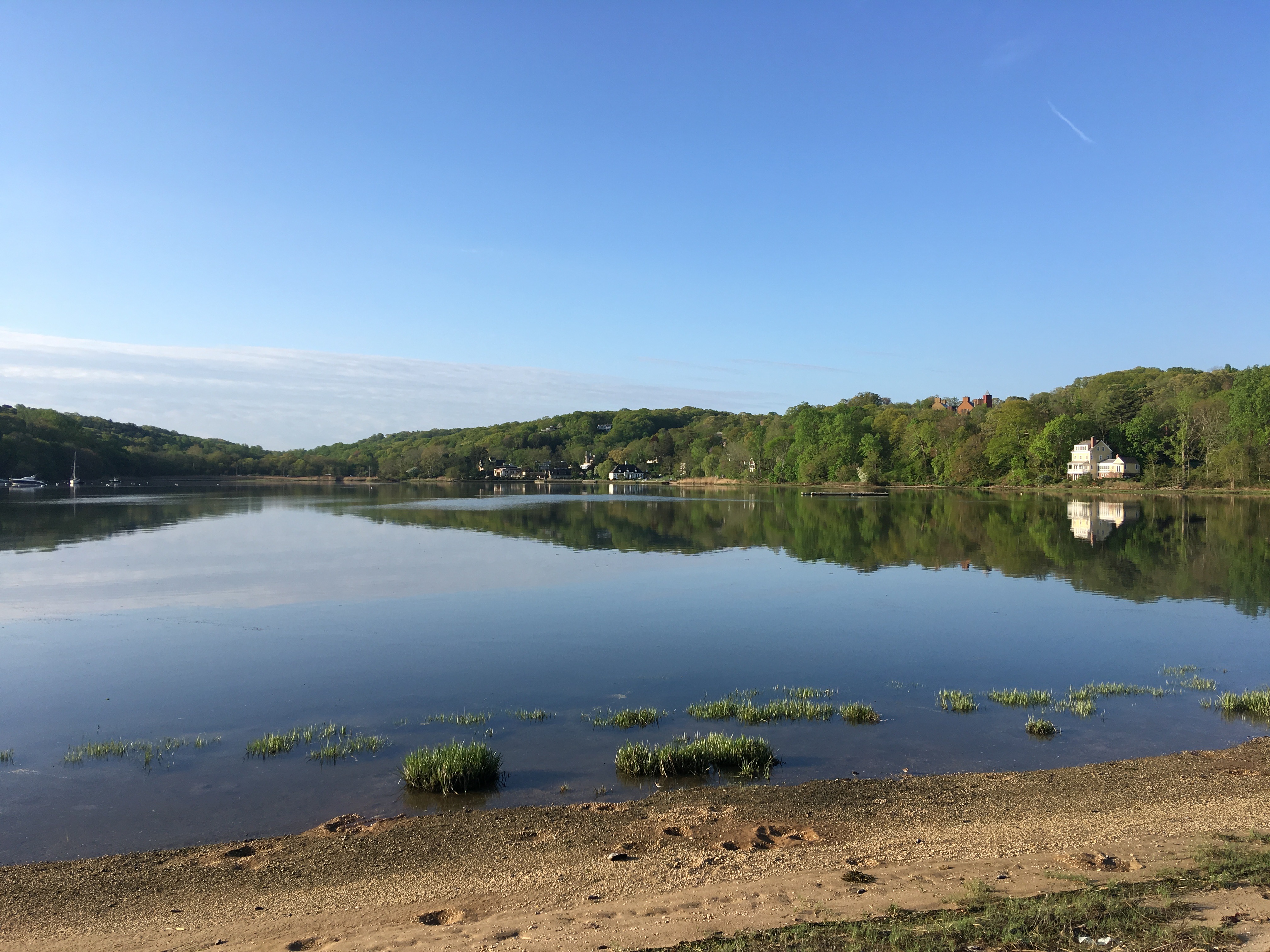 I zoomed in on one of the oldest buildings on the site, Jones Lab. In the early 90s I attended a 3-week course here, which was based in the lovely old building, but a few months later it was decommissioned as a scientific lab and turned over to the administration. [EDIT: I peered in last night and there was someone in a white coat pipetting – the essence of modern lab science – so it has clearly been re-repurposed and is now a lab again. Hooray!] 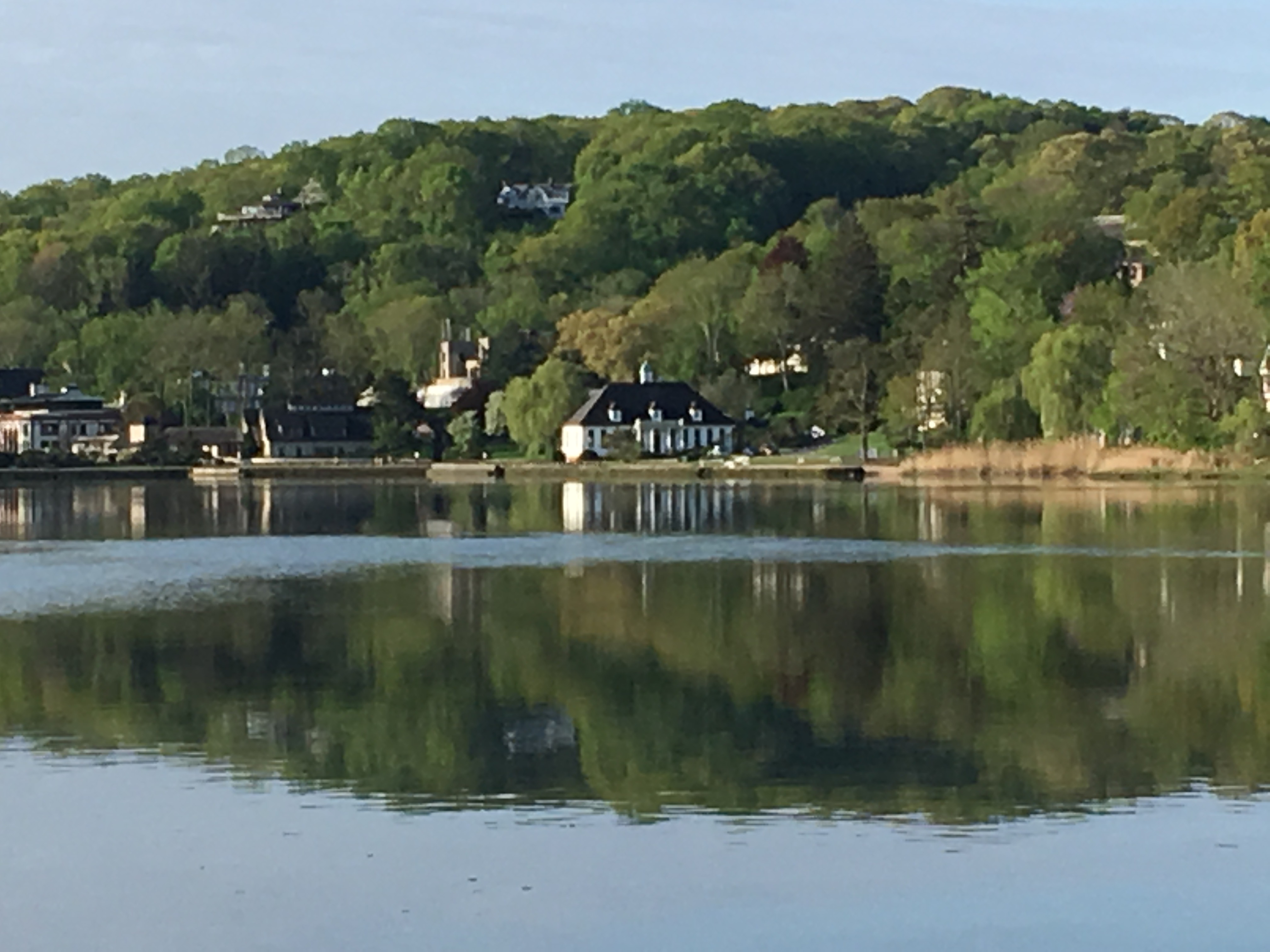 On the beach I noticed these depressions: 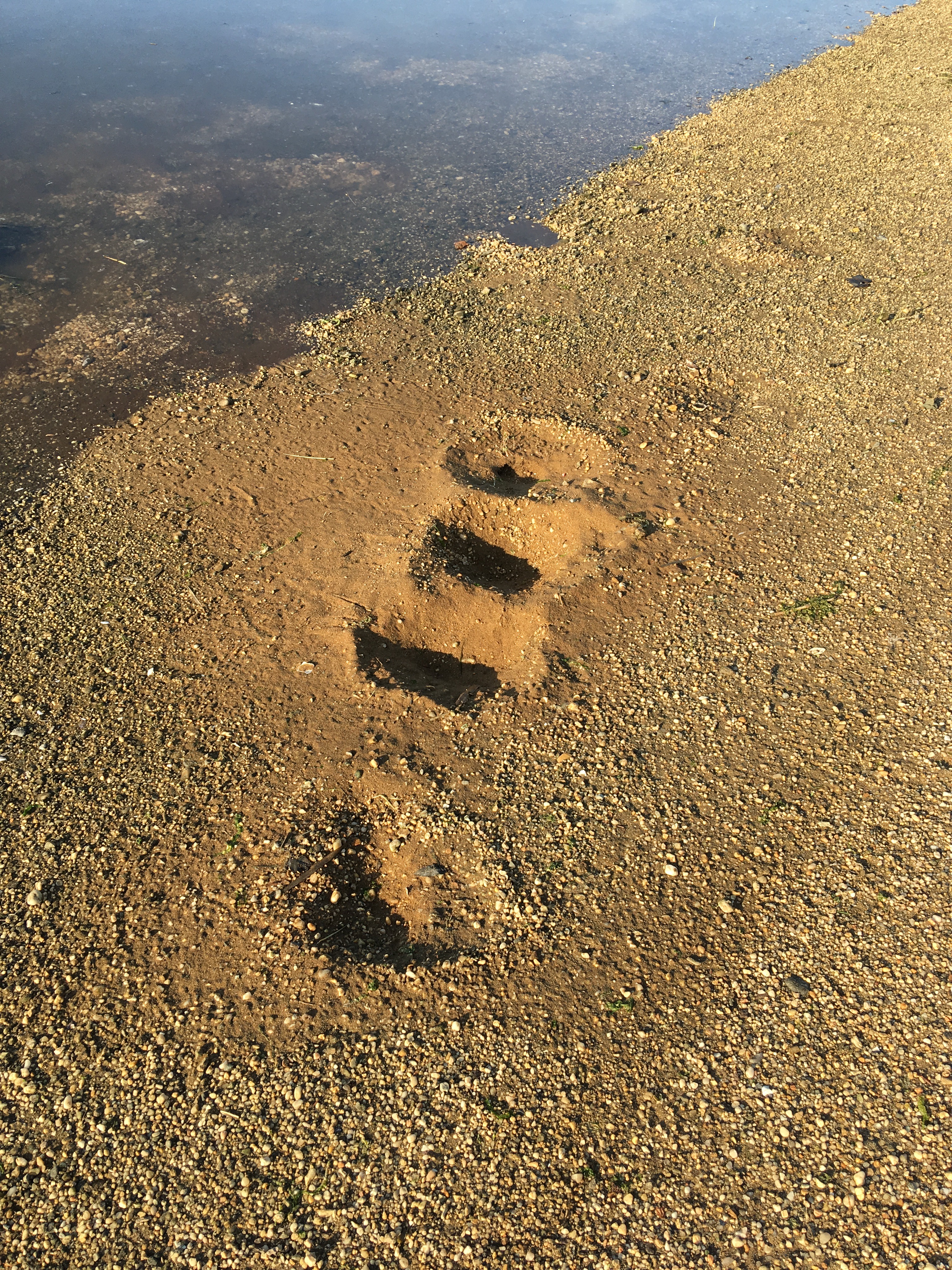 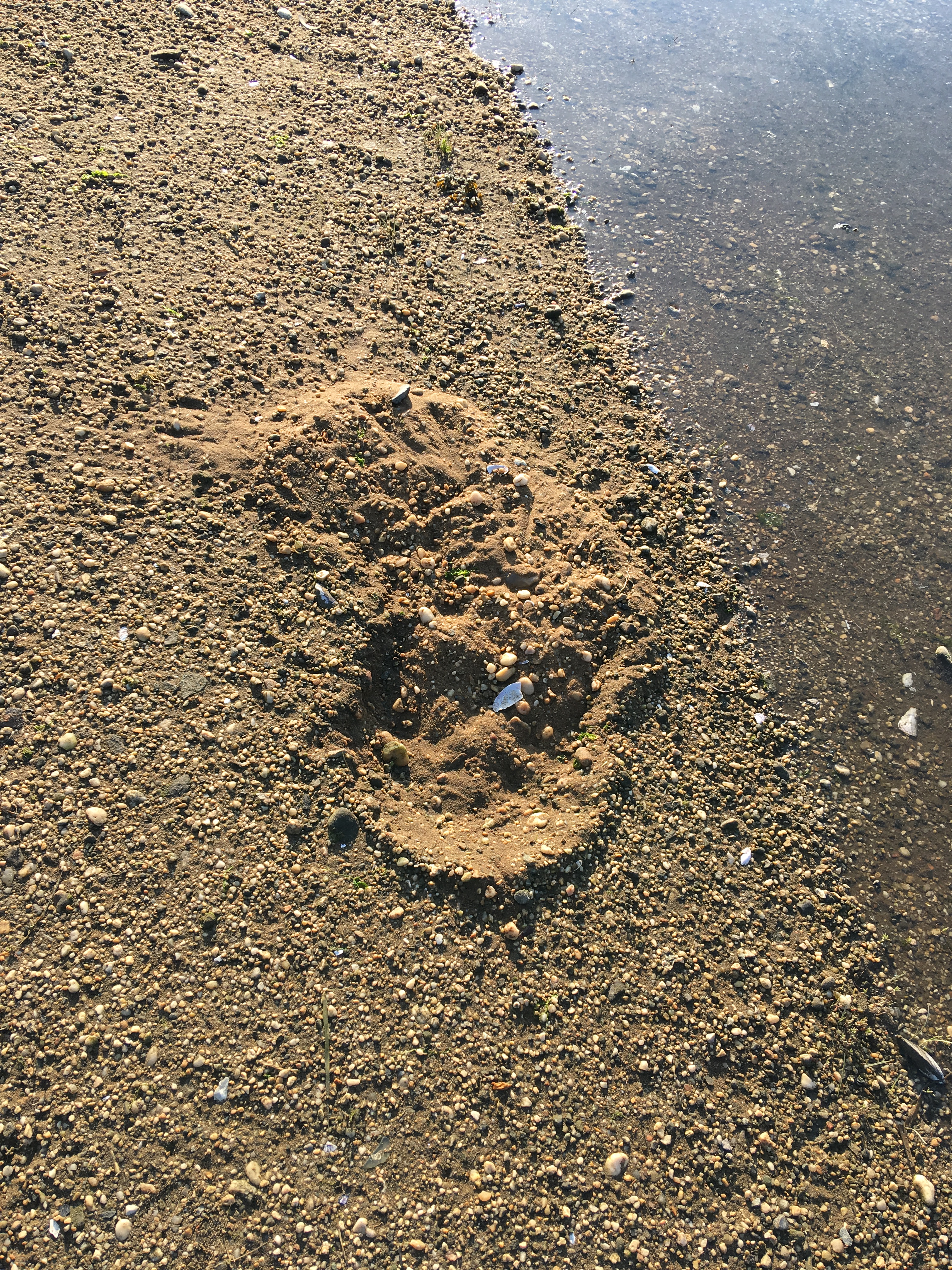 What had made them? My guess is that they were made by xiphosurids, or horseshoe crabs. They mate around this time of the year – the females come up onto shallow quiet beaches, dig a depression and lay their eggs; the males then fertilize them externally. Here’s an ex-xiphosurid I found nearby. This one was obviouisly pretty old – it had acquired quite a few barnacles, some of them quite large. 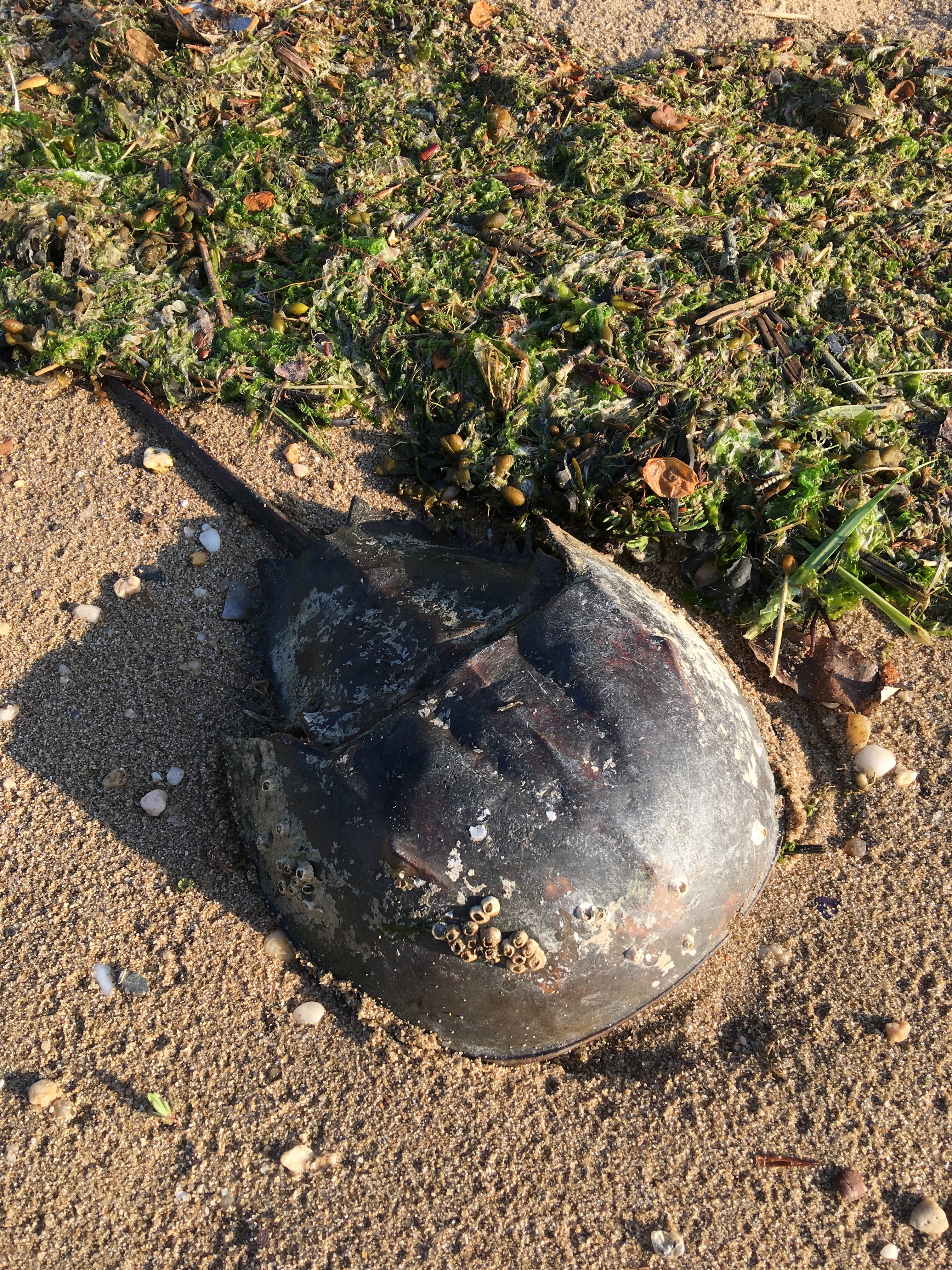 And here are some tell-tale xiphosurid traces in the sand. The single line is made by the animal dragging its telson (the spiky bit at the rear on the photo above – this doesn’t sting, and is probably used for righting themselves either on land or when they are swimming (yes they can swim)). 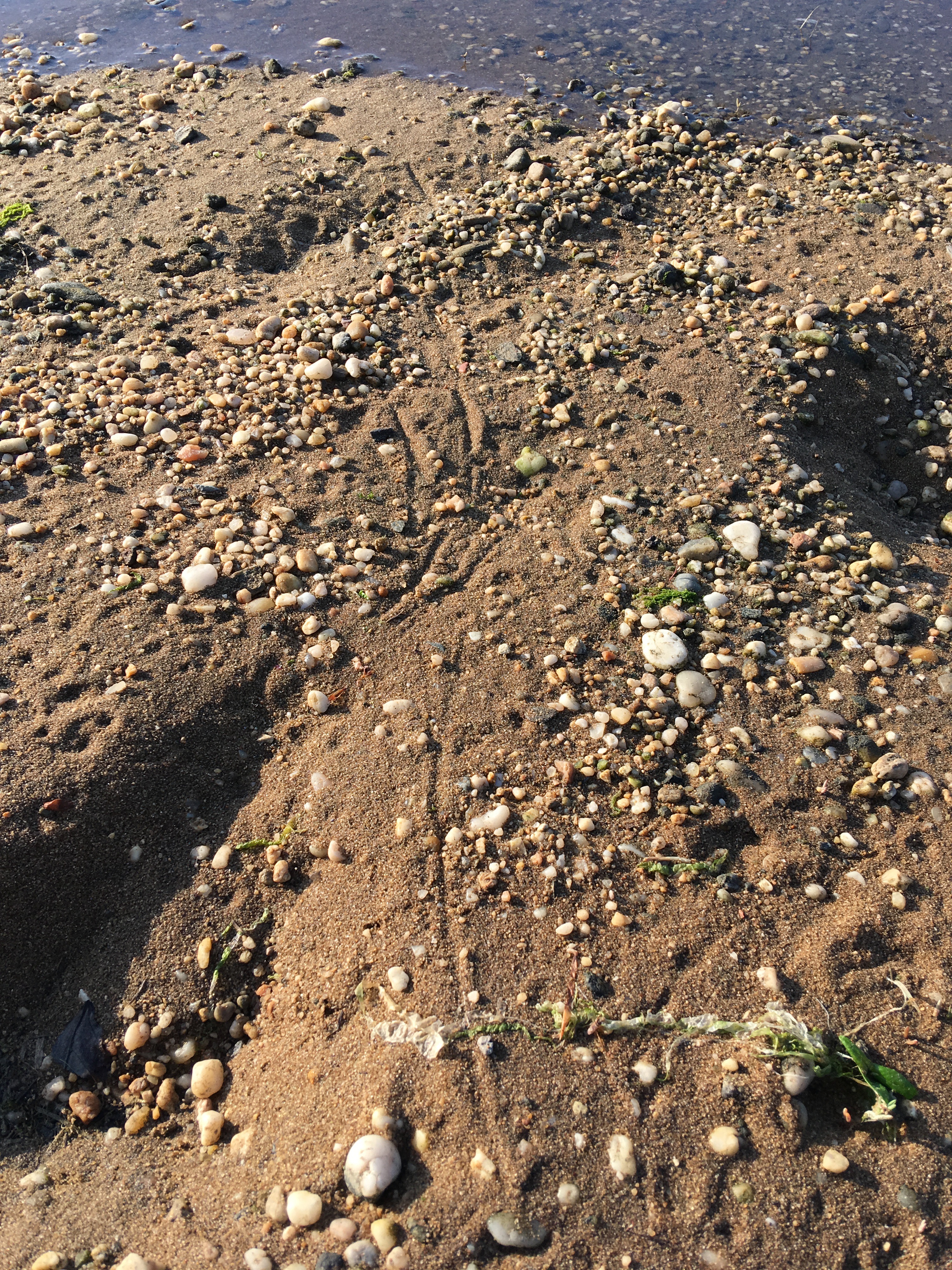 These tracks show the ‘pusher’ legs on either side of the body: 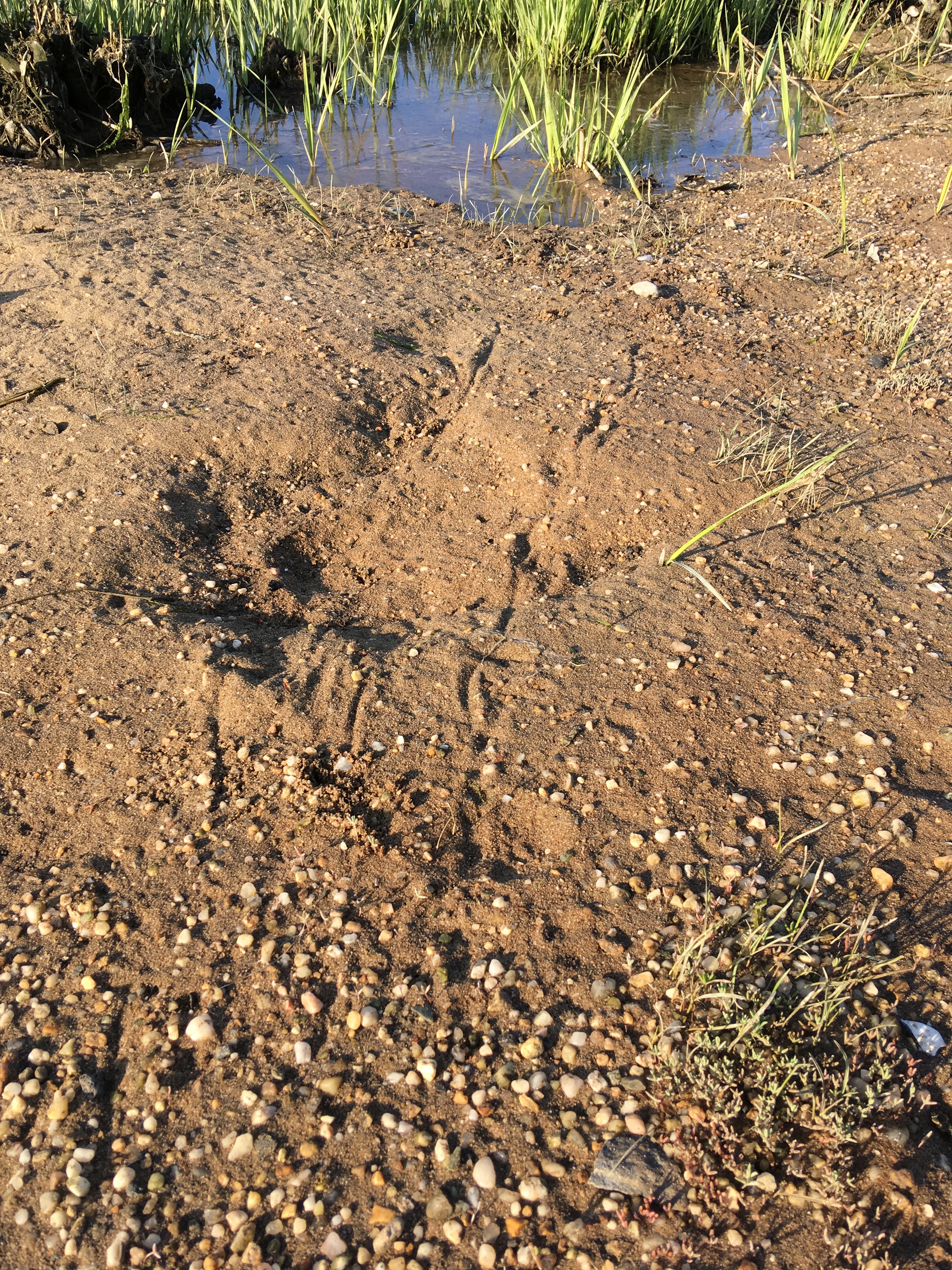 Elsewhere I found a whole ecosystem. The ants were coming out of the small hole bottom left, between the dead leaf and the bit of wood, making there way into the xiphosurid carcass and also onto the kelp. That is their universe. 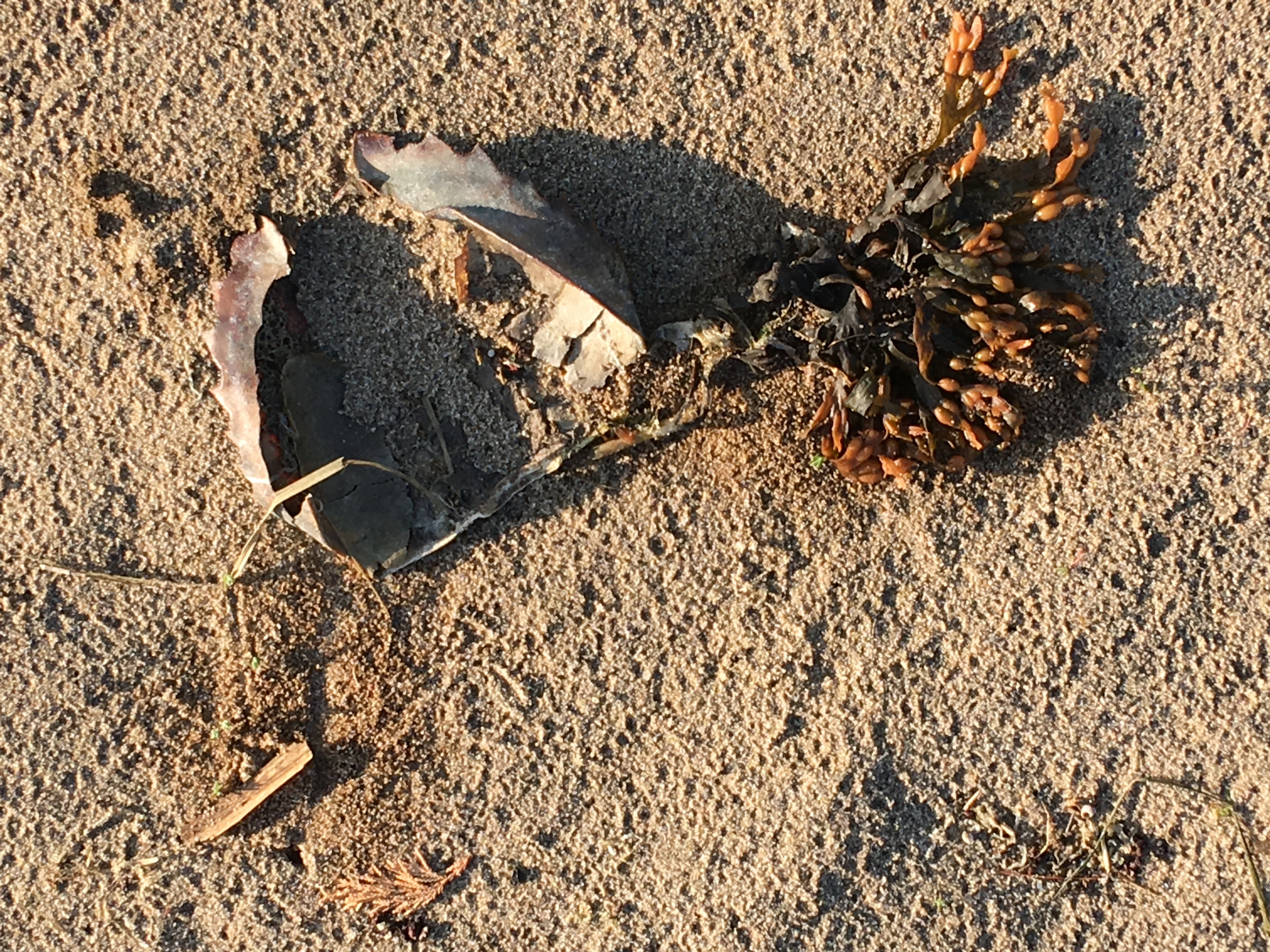 And of course there were traces of deer: 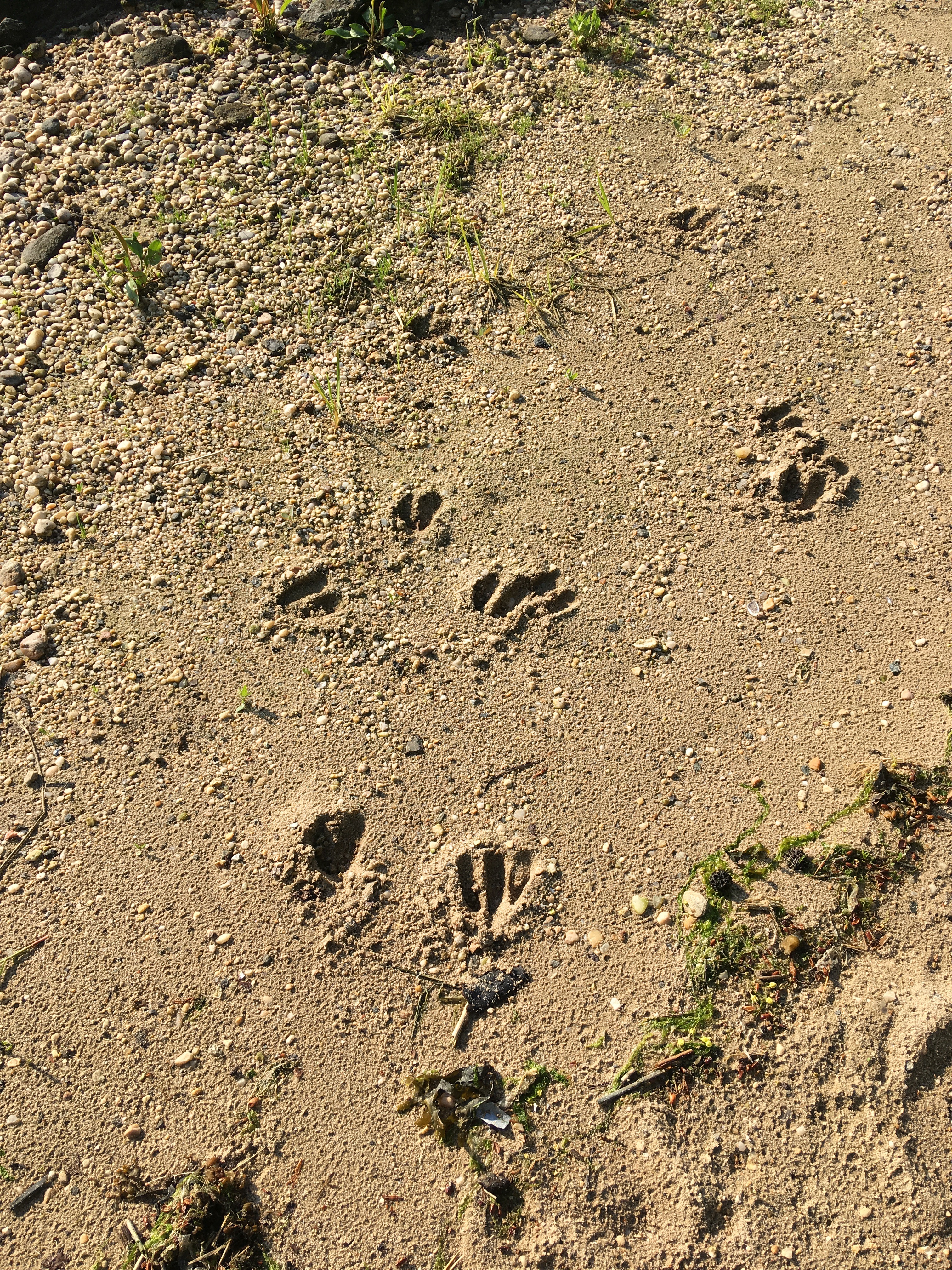 Finally, spot the squirrel! I warn you, this is fiendishly difficult and isn’t helped by the fact that WordPress doesn’t seem to want to allow you to enlarge it. I couldn’t see the squirrel on the photo and I knew where the damn thing was. I’ll post the answer in about 4 hours. 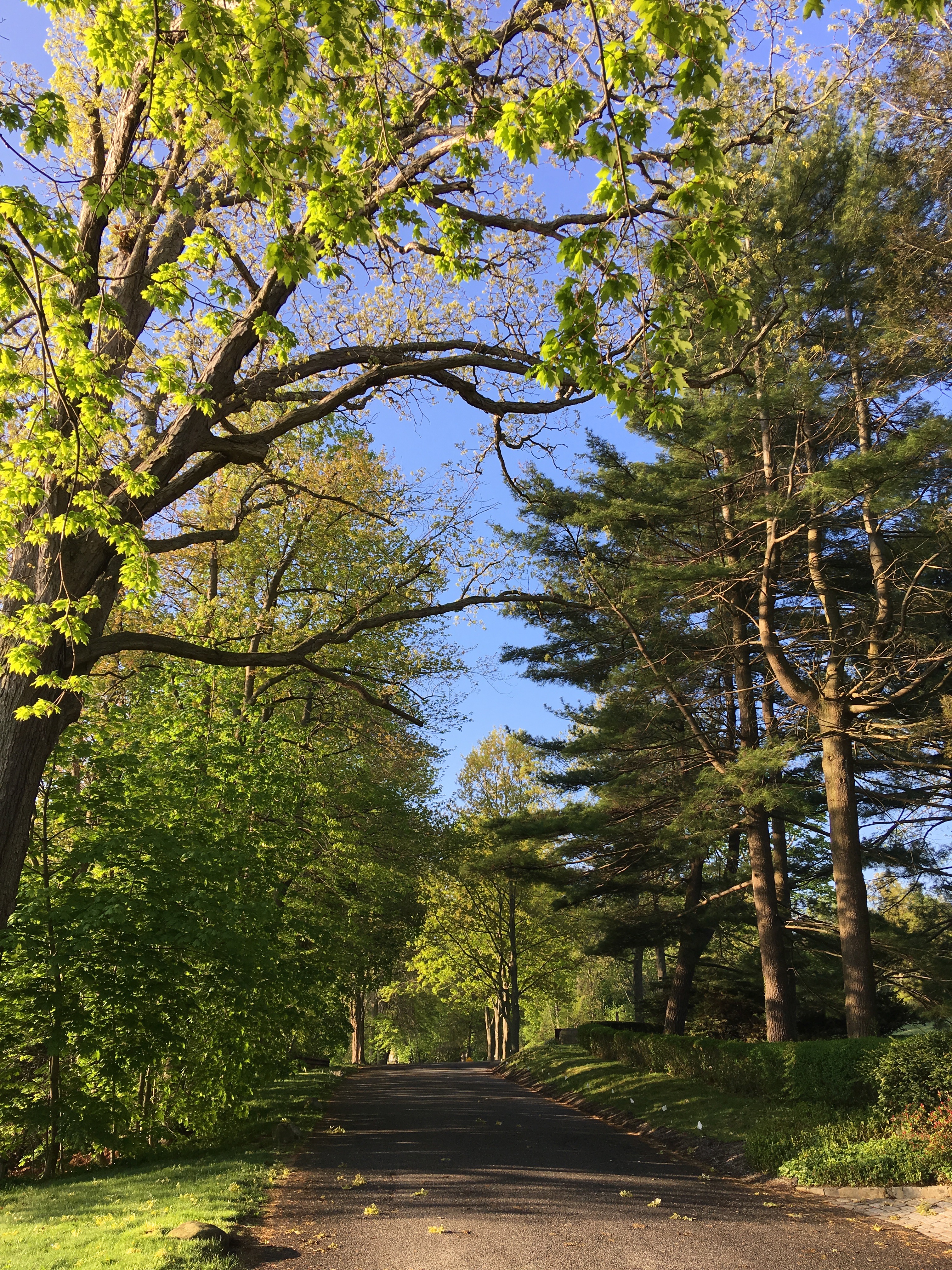