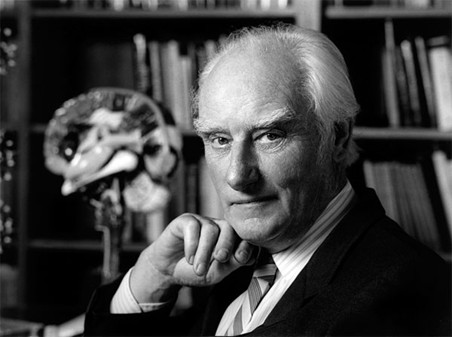 Francis Crick, co-discoverer of the double helix structure of DNA with Jim Watson, was born 100 years ago today, on 8 June 1916. He was one of the most remarkable scientists of the 20th century, and, in my opinion, had one of the greatest scientific minds ever. As Jerry put it here a while back, ‘Crick was a fricking genius!’

A few weeks ago, on 16 May, Cold Spring Harbor Laboratory (CSHL) on Long Island organised a day-long symposium, ‘Celebrating Francis,’ in which a range of speakers outlined the key phases of his life. As well as historians and colleagues, the speakers included Jim Watson, Michael Crick (Francis’s son) and Kendra Crick (his grand-daughter). I was lucky enough to be invited to speak by the CSHL organisers – Alex Gann, Mila Pollock and Jan Witkowski (my sincere thanks to all of them). The audience included veteran figures of molecular biology such as Mark Ptashne, Matt Meselson and Don Caspar. Sadly absent was Crick’s long-time collaborator, Sydney Brenner, who could not travel due to ill-health.

The evening before the meeting, there was a celebratory concert in the Grace Auditorium at CSHL, given by the virtuoso young pianist Charlie Albright, who in some ways is Jim Watson’s protégé. The programme included Chopin and Liszt, and a feature of Albright’s concerts – an improvisation on a set of notes chosen by the audience.

Afterwards there was an excellent banquet, at which all the guests were presented with a rather bizarre Crick bobblehead as a souvenir…

And so to bed.

Jetlagged, I awoke before dawn, and wandered down Bungtown Road towards the sand spit which protects Cold Spring Harbor from the worst of the weather. There was an astonishing dawn chorus of birds, the impact of which was slightly lessened by the fact that I could not identify a single one. 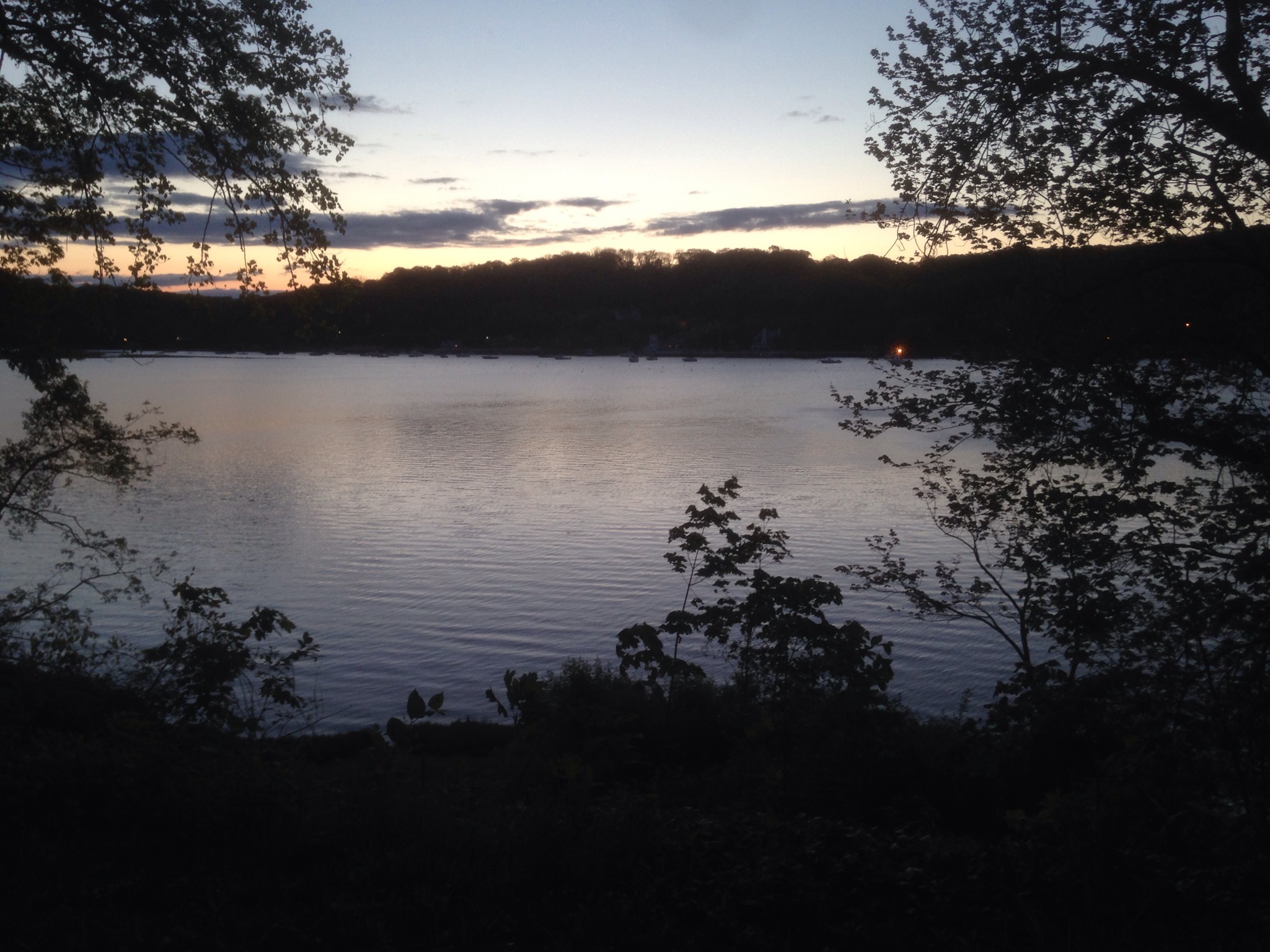 On the sandspit I found traces of un raton laveur… 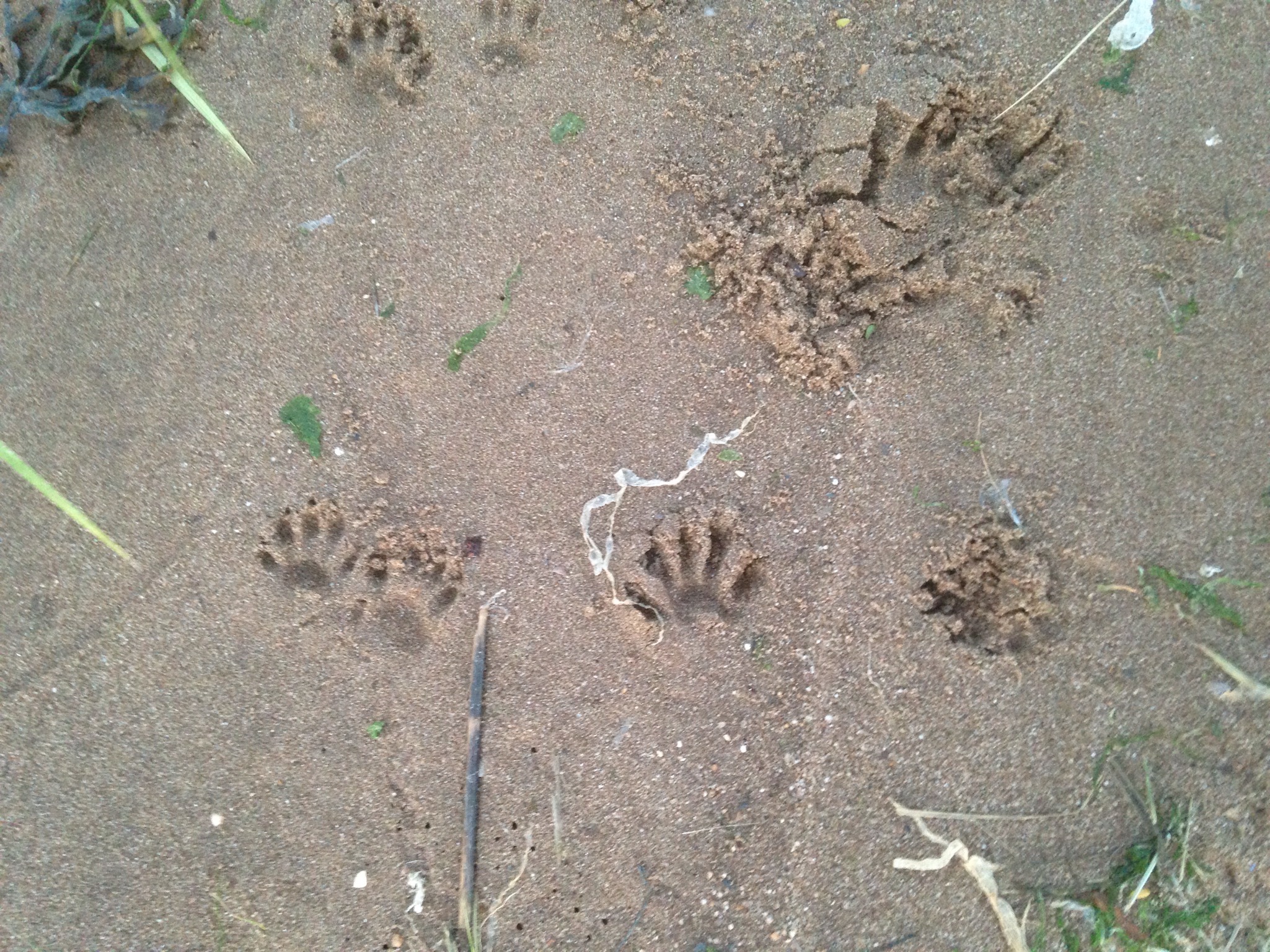 After breakfast, the meeting began. The opening speech was given by Jim Watson, who spoke in moving terms about his friendship with Crick, and the immediate impression the older Englishman made on the young Watson, who was only 23 when they first met in 1951. There was a gleam in his eye, and you could glimpse what Watson must have been like all those years ago – brilliant, obsessive and incredibly annoying to anyone who did not share his obsessions.

This was followed by two presentations dealing with Crick’s early life and career, by his two biographers – Matt Ridley (author of Francis Crick: Discoverer of the Genetic Code (2006) – an excellent brief account of Crick’s life—and Robert Olby, whose Francis Crick: Hunter of Life’s Secrets (2009) remains the definitive account.

Ridley’s humorous and insightful scene-setting included a nice connection between Crick’s grandfathers and Charles Darwin (Darwin was sent a specimen by Crick’s grandfather, which he wrote up in his final paper, without giving credit where credit was due…). He also took time to rightly swipe at the story, regularly repeated, that Crick was high on LSD when he realised that DNA was a double helix. Whatever Crick may or may not have done later, understanding the structure of DNA involved some complex mathematics that would be highly soluble in a psychedelic. Ridley also recounted Crick’s opposition to the inauguration of a Christian chapel at Churchill College Cambridge, where he was a fellow, which involved an exchange of letters – and cheques – with Sir Winston Churchill.

Olby’s presentation focused on Crick’s war-time work with the Admiralty, where he used his mathematical and physical insights to develop complex procedures for exploding enemy mines. Even in his war work, Crick’s mental agility, and his humour, came out. On the other hand, he was clearly a handful for those who were charged with trying to corral him into focusing on the task at hand.

After the coffee break, Steve Harrison presented what was probably the decisive development in Crick’s intellectual outlook, as he turned his mathematical skills to the study of molecular structure, in particular the importance of helices. It was through his PhD work on this topic that Crick was able to come up with the correct interpretation of the structural data that was obtained by Rosalind Franklin and her (and Maurice Wilkins’) PhD student, Ray Gosling. Crick could see what Franklin could not, because he had been thinking about helices for several years. As Pasteur put it, fortune favours the prepared mind.

Watson’s own description of the discovery of the structure of DNA did not contain any striking new revelations, with one exception. He finally admitted that when he wrote in The Double Helix that Crick strode into the Eagle pub and proclaimed ‘We have discovered the secret of life’, this was not true. Watson said he made it up, for dramatic effect. Crick always denied saying any such thing, and historians have long known that The Double Helix cannot be taken as an entirely reliable source.

Watson spent some time talking about Rosalind Franklin, who is now so often the focus of speculation and argument about who should get credit for the discovery of the structure of DNA, driven partly by Watson’s own searingly honest account in the pages of The Double Helix of his bad behaviour towards her. His view at the meeting was entirely in keeping with his more mature, reflective account, to be found at the end of The Double Helix, but which many of his critics do not appear to have read. For those of you who want to know more – no, Watson and Crick did not steal Franklin’s data. You can read my account here. In his speech before the Charlie Albright concert, Watson had said, rightly, that in another Universe, we would not talk about the Watson-Crick structure of DNA, but instead of the Franklin- Wilkins structure.

The final talk before lunch came from Crick’s son, Michael. In March 1953, at the age of 11, Michael became the first person outside of the immediate scientific circle of Watson and Crick to know about the double helix structure, when Crick sent him a letter, which was recently sold at auction for $6 million. Michael explained that he had recently understood that the letter was not in fact written for him, but rather for posterity (hence the numbered pages, claimed Michael), and that it was sent to him in response to the fact that, a few months earlier, he had baffled (and annoyed) his father by creating a code that had been unbreakable (Michael refused to divulge what the code was, as he had taken an oath, aged 11, never to do so…).

After lunch I spoke about the genetic code, and Crick’s role in coming up with the key phrase in Watson and Crick’s second Nature paper, which appeared six weeks after the first – ‘the precise sequence of the bases is the code which carries the genetical information’ (Watson did not demur from my suggestion). I concentrated on what happened after this decisive moment, as scientists from around the world tried to crack the code using a variety of means, culminating in Nirenberg and Matthaei’s 1961 off-the-wall experimental approach.

Over lunch, Matt Meselson told me that he heard Nirenberg’s small talk at the August 1961 Moscow Biochemical Congress quite by accident – he was passing the room and went in on the off-chance, along with a dozen other people. Meselson’s version of how he came to hear Nirenberg’s breakthrough was a significant addition – as is well known, overwhelmed with excitement he dashed to find Crick, who was chairing a plenary session the next day and told him the news. Crick, despite being scooped, immediately changed the programme and generously invited Nirenberg to give his talk again, this time to hundreds of scientists, effectively launching a race to crack the whole of the genetic code, which culminated in 1966 in Cold Spring Harbor, on Crick’s 50th birthday.

After spending 20 years of his life focused on molecular structures, Crick shifted his interest to neuroscience (other researchers made similar moves – Sydney Brenner turned to development, pioneering the use of the worm C. elegans, while Seymour Benzer used Drosophila to study behaviour, something which changed my life a few years later).

This final phase of Crick’s intellectual life was described by one of my student heroes, Tomaso Poggio, who in the 1970s developed mathematical models of vision in flies, inspiring me to think about how modelling could explain the activity of simple nervous systems that produce complex behaviour.

He was followed by Pat Churchland, who worked with Crick at the Salk Institute. Churchland is an unusual mix – a philosopher and a neuroscientist – and she described her daily interactions with Crick and his piercing questioning of everything. She emphasised the importance of his work with Christof Koch on consciousness in humans, which culminated in a 2003 article ‘a framework for consciousness’. Even if the detail was probably wrong, Crick’s fundamental genius lay in his ability to ask the right questions.

The final two contributions were the most personal (everyone except myself had met Crick, and brought their memories into play when they spoke about him). First, Kindra Crick, his grand-daughter, spoke about how she remembered her grandfather, and what it was like being a neuroscience student with such a famous ancestor (like Odile, Crick’s second wife, she eventually became an artist).

Finally, Jim Watson closed the proceedings, speaking about a man who was not only a brilliant scientist, but also Watson’s friend.

And there you have it. Crick made a massive contribution to science, not only through his work with Watson in uncovering the structure of DNA, but in realising its significance in terms of the genetic code, and in then being the intellectual driving force behind the international race to crack the code, which covered the years 1953-1967. His work on neuroscience and consciousness did not have the same success – perhaps not surprisingly, given the scale of the challenge – but showed the same piercing intelligence at work. And perhaps when, maybe, at the end of this century, we have finally resolved this most fundamental of scientific problems, Crick will again turn out to have made a decisive contribution.