I am reading a pre-publication copy of Matthew Cobb’s new book about the genetic code, for he asked me if I could provide a blurb. Now, I never tout a book unless I’ve read the whole thing, but in this case it’s a labor of love. His book is called Life’s Greatest Secret: The Story of the Race to Crack the Genetic Code. It will be published in the UK by Profile on June 11, and in the US by Basic Books on July 7 (links go to the respective Amazon sites where you can pre-order it).

Life’s Greatest Secret is the story of the discovery and cracking of the genetic code. This great scientific breakthrough has had far-reaching consequences for how we understand ourselves and our place in the natural world. The code forms the most striking proof of Darwin’s hypothesis that all organisms are related, holds tremendous promise for improving human well-being, and has transformed the way we think about life.

Matthew Cobb interweaves science, biography and anecdote in a book that mixes remarkable insights, theoretical dead-ends and ingenious experiments with the pace of a thriller. He describes cooperation and competition among some of the twentieth-century’s most outstanding and eccentric minds, moves between biology, physics and chemistry, and shows the part played by computing and cybernetics. The story spans the globe, from Cambridge MA to Cambridge UK, New York to Paris, London to Moscow. It is both thrilling science and a fascinating story about how science is done.

This is a pretty accurate take on the book. I’m about halfway through it (it’s 320 pages long), and it’s very good, on par with Horace Freeland Judson’s The Eighth Day of Creation (which everyone should read), itself a superb account of the revolution in molecular biology in the twentieth century. While there is some overlap between the two books, Matthew’s story concentrates on the deciphering of the genetic code itself:  how DNA can carry information that makes the molecule a blueprint for organisms’ bodies and behaviors.

Life’s Greatest Secret is a logical successor to Watson’s The Double Helix, and it would be a nice exercise to read them one after the other, though Watson’s is a memoir and Matthew’s a historical account. Most of us have read Watson’s book, but if you have you might not have realized that finding the structure of DNA was only the beginning of understanding how genes work. After Watson, Crick, Wilkins, and Franklin figured out that DNA was a double helix, and W&C elucidated its structure, geneticists still—as Hitchens might say—”had all their work before them.”  For the structure, while telling us how DNA maintains its specificity through meiosis and mitosis, and how mutations might happen, tells us nothing about how the structure is translated into organisms. That depends on understanding the genetic code.

It took more than a decade to fully understand that code, and that’s the subject of most of Matthew’s book (he also describes the earlier work by Avery et al. on how they figured out that DNA rather than protein was the genetic material, and recounts the work of the four DNA sleuths mentioned above). While we know now how it all works, back then it was a complete mystery, and people like George Gamow—a fierce and eccentric intellect—bruited about erroneous suggestions like protein sequences being determined by amino acids fitting into the interstices of the DNA molecule. People were truly casting about for ideas on how the whole thing fitted together. Nothing was known about messenger RNA, about transfer RNA, or about the whole apparatus whereby DNA ultimately produces proteins. Figuring it out was a formidable task, requiring both theoretical insights and difficult experimental work. That story is gripping, as the blurb above says, and, at least for this biologist, Matthew’s book is a page-turner. I occasionally had to stop reading to digest and marvel at the detective work involved in gleaning what is now routine knowledge for high-school biology students.

One of my strongest impressions so far is that, in all of this tale, Francis Crick was a fricking genius. Yes, both he and Watson collaborated fairly equally in elucidating the structure of DNA. But Crick went on to help solve the problem of “translation,” and in so doing produced remarkable insights available only to someone with a brain qualitatively different from those of other scientists.  I want to mention three of Crick’s intuitive leaps that were remarkably prescient, all turning out to be correct.

The first is the notion of transfer RNA: those small RNA molecules that latch onto amino acids and, moving to the ribosomes where the messenger RNA (the transcribed product of DNA) resides, assemble those amino acids into proteins. It was known that DNA remains in the nucleus, but that both RNA and proteins are found in the cytoplasm, the place where proteins appeared to be made. But it wasn’t obvious how an RNA product of DNA (and that product wasn’t known when Crick made his speculations) could get itself into the cytoplasm and act as a template for assembling proteins.

In 1957, only four years after he and Watson proposed the correct structure of DNA, and well before the genetic code was unraveled, Crick gave a lecture at University College London in which he speculated how DNA coded for proteins. In it, he took up the twin issues of how DNA was connected to RNA, and how RNA itself might help assemble proteins. His solution, which turned out to be right, was remarkably prescient. And here I’ll quote Matthew’s book (with permission):

In his lecture, Crick turned his brilliant mind to both these issues and publicly described the idea he had worked up with [Sydney] Brenner: there must be an unknown class of small molecule, which they called an adaptor, which would gather each of the twenty amino acids and take them to the ribosome, so that each protein could be assembled there. The most likely hypothesis was that there was one adaptor for each type of amino acid, and that it would contain a short stretch of nucleotides—a tiny bit of the genetic code that was able to bind to the RNA template in the ribosome, just like base pairing between the two strands of the DNA double helix. At the same time, on the other side of the Atlantic, Hoagland and Zamecnik were isolating what was later identified as Crick’s adaptor—eventually known as transfer RNA or tRNA—without knowing anything about Crick’s hypothesis.

Crick’s insight and Brenner’s contributions were remarkable, for at that time nobody knew about either messenger RNA or transfer RNA, much less how they worked. In all but trivial details—some amino acids can attach to more than a single tRNA molecule—Crick’s hypothesis was on the money. And yet it was a pure, blind stab in the dark.

Second, Crick realized, well before evolutionary biologists started even thinking about DNA and protein sequences, that these sequences could be of enormous value to our field. Here’s an excerpt Matthew gives from Crick’s 1957 talk—surely one of the most far-reaching scientific lectures of all time:

“Biologists should realize that before long we shall have a subject which might be called ‘protein taxonomy’—the study of the amino acid sequences of the proteins of an organism and the comparison of them between species. It can be argued that these sequences are the most delicate expression possible of the phenotype of an organism and that vast amounts of evolutionary information may be hidden away within them.”

That is an amazingly far-sighted statement, especially coming from someone who wasn’t even close to being an evolutionary biologist. It misses the mark only in that Crick didn’t mention that if DNA coded for proteins, then perhaps we could have the same kind of taxonomy based on DNA as on protein sequences. But here Crick was seeing proteins as part of the organism’s phenotype, and the “evolutionary information” as the way different phenotypes arose from different proteins.

Finally, a year earlier, Crick had already formulated the idea of the “central dogma”: “DNA makes RNA makes protein,” and the notion that no information could flow from protein structure back to the DNA.  Below is Crick’s first recorded sketch of this idea in notes he made for himself. Note that Crick also allows both molecules to give information about themselves (i.e. the replication loops), as well as for information from RNA to be incorporated into DNA, which was later verified by the discovery of the enzyme reverse transcriptase.

Here are Crick’s notes from the NIH archive sketching the “central dogma,” which Crick called “The Doctrine of the Triad.” (See also the “Profiles in Science” page of The National Library of Medicine for information on lots of the principals in this story). 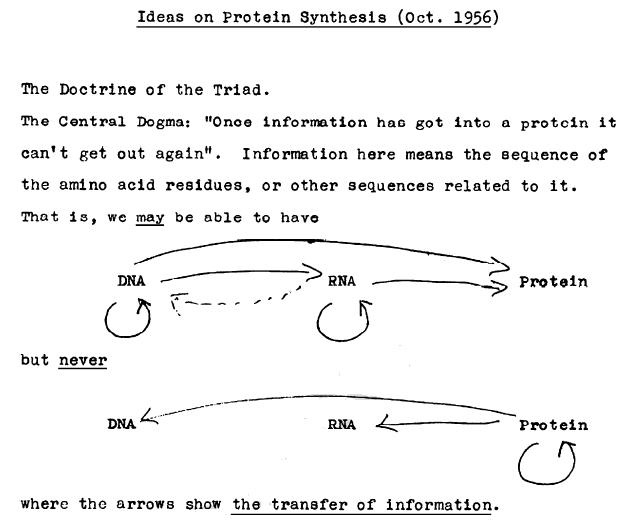 This is remarkable, and makes my heart beat a bit faster. Those were the days of the giants on whose shoulders we stand, and Crick was the biggest of them all. I won’t go on, as there is a lot more to this story that you can read in Life’s Greatest Secret. I’ll add only that if you have any interest in the history of genetics, or about the most amazing and informative discovery in biology of our time, you should read Matthew’s book. Here’s the cover; note the clever use of nucleotide bases: 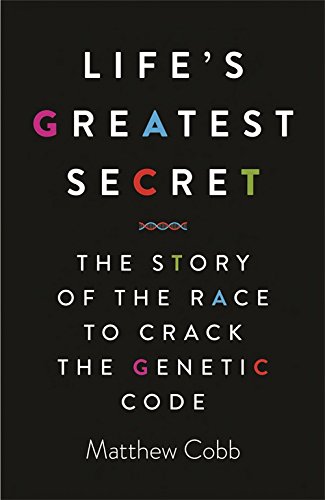 Matthew also said that he’d be glad to answer readers’ questions about the book, or about the subject of the book, if you put them in the comments below.

Finally, here’s Francis Crick (1916-2004). Both he and Watson, by the way, were diehard atheists. Watson once told me that they were both partly driven to find the structure of DNA because showing that the “secret of life” was purely chemical would dispel notions that God had a hand in it: 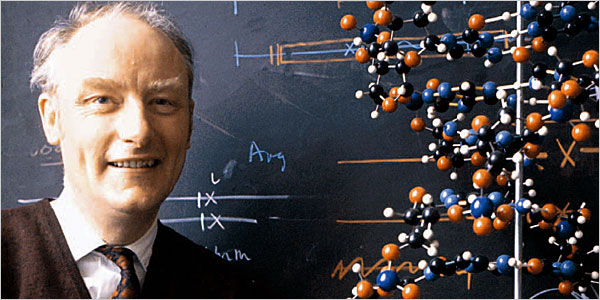