Professor Ceiling Cat (Emeritus) here: I’m back for a week doing the Hili dialogues, but will then repair to Paris for a week and a half. Let’s all have a round of applause for Grania, who took over this onerous duty when importuned.

Honey is still not back, though Sir Francis continues to guard the pond (and to get his daily rations). I will be bereft if my hen mallard doesn’t return; my one hope is that she’s sitting on her eggs somewhere nearby.

It’s April 30, National Raisin Day, brought to you by California Big Raisin. And it’s a UNESCO holiday: International Jazz Day! Let’s have some jazz, then, and in order not to jar you at this time in the morning, some soft jazz:

It’s the 241st birthday of Carl Friedrich Gauss, and Google has a Doodle celebrating the great German polymath. Note that the letters “oogle” each commemorate one of his contributions; can you name them?

On April 30,1492, Christopher Columbus received his “commission of exploration”, which of course led to his voyage to the Americas that year. On this day in 1789, George Washington was sworn in (on Wall Street in New York City) as the first elected President of the United States.  On April 30, 1803, the U.S. bought the Louisiana Territory from France for $15 million. This “Louisiana Purchase” more than doubled the size of the country.  On this day in 1897, J. J. Thomson announced his discovery of the electron as a subatomic particle; the work was done at the Cavendish Labs and the announcement made at a lecture at London’s Royal Institution.  In 1905, the “Miracle Year” for Einstein, he finished his doctoral thesis on April 30 at the University of Zurich.  Exactly 22 years later, the first set of footprints were left in concrete in front of Hollywood’s Grauman’s Chinese Theater: they belonged to Douglas Fairbanks and Mary Pickford. It’s Hitler Death Day, too: on April 30, 1945, Hitler and his new wife Eva Braun committed suicide in the Führerbunker as Russian troops closed in.  Exactly three decades later, Saigon fell to the Communists and the Vietnam war ended as the South Vietnamese President surrendered.  On April 30, 1993, CERN announced that the protocols for the World Wide Web would be free. Finally, in 2008, skeletal remains found near Yekaterinburg, Russia, were confirmed to be those of Alexei and Anastasia, two children of the Czar. The remains of the whole family, shot by the Bolsheviks, now rest in the Peter and Paul Fortress in St. Petersburg.

Meanwhile in Dobrzyn, Elzbieta, who with luck (and with Andrzej II and Leon) will soon be a neighbor of Hili and Staff, came to visit, bringing Hili a cat sausage:

Hili: How nice that you came.
Elzbieta: I can tell that you are glad to see me. 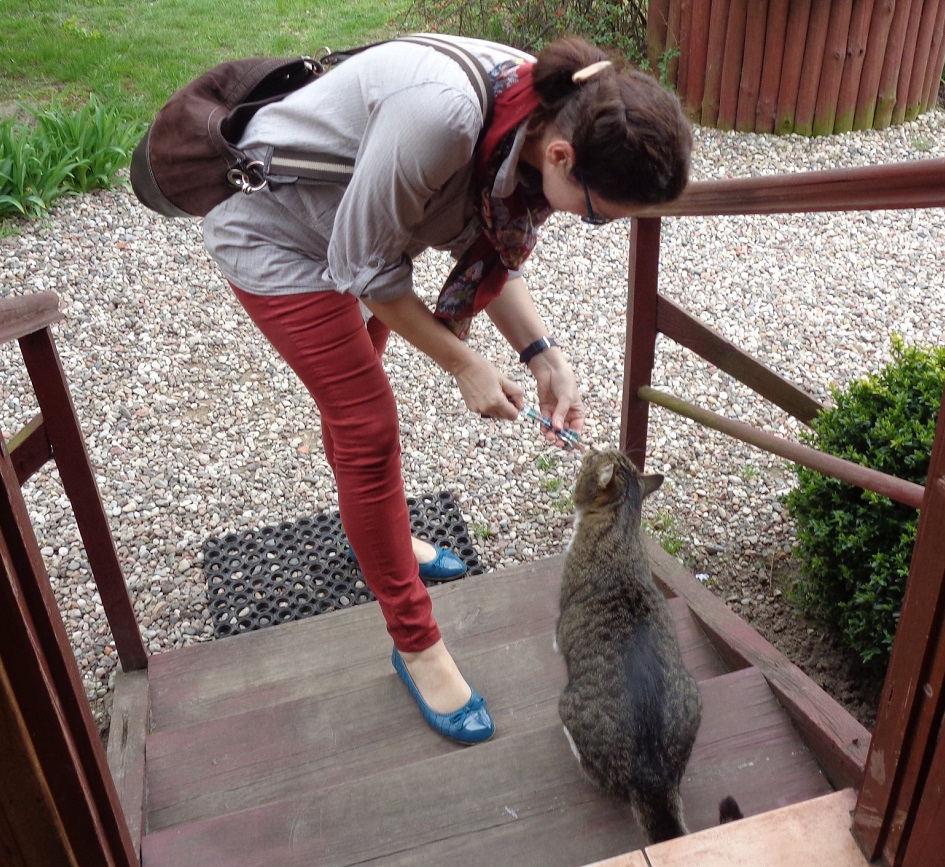 The good news from Wloclawek is that Leon and his staff have at last managed to find a contractor to pour the foundations for their wooden home, previously moved from southern Poland and its pieces stored in Andrzej and Malogrzata’s garage over the winter. Soon Leon will be living only ten miles from Hili! Here’s Leon speaking from the site of his future home:

Leon: The Sunday siesta. Where shall I dig around?

And we’re lucky to have photos and videos of all three Website Cats today. Here is a video of Gus getting baked in Winnipeg. Staff Taskin reports:

I plucked a bit of last year’s dried out plant from the pot. (It was a tiny bit too.) Catnip doesn’t survive our winters, so I will have to buy a new plant this year.

From Matthew; a Christmas pine cone, over half a century old, brings new life:

Spot the spider! Matthew will answer below:

Spot the spider! Out with headtorch last night & found the NZ spider Cryptachaea veruculata in the depths of Holy Vale. Prob widespread now on St Mary’s. Not complaining re 14.5 hours of daylight – but may need another search method?@BritishSpiders @mattprince1969 @Tone_Killick pic.twitter.com/fxoOsgJPL7

Having been out all night carousing, puss arrived home bleary-eyed in the early hours, only to realise that he'd foolishly lost his keys. pic.twitter.com/FDV9U6s6Ld

From Grania: George Takei seems a bit of a flake!

Me: Have you seen my phone?
Brad: You’re holding it.
Me: Oh myyy. So I am. How…
Brad: You just texted me asking if I’d seen it.

LOL, these ducks refused grapes, as did mine!

The day has only been marred by being snubbed by ducks. I heard that it is the middle class thing to do to feed grapes to ducks instead of bread.
These ducks turned their bills up. Philistines. I bet they would have been on stale Brennans Sliced Pan like pissheads on a spicebag pic.twitter.com/ZqGUDb2vvK

And cats pwning d*gs: all is well in the world.