In March of last year, conservative political scientist Charles Murray spoke—or rather, tried to speak—at Middlebury College in Vermont. As you know, Murray was one of the authors of The Bell Curve, a book I still haven’t read but that has the reputation for pushing a hereditarian interpretation of the IQ difference between whites and blacks. I can’t speak to that assertion, but Murray wasn’t even going to come near that topic at Middlebury. Regardless, his co-authorship of the book, and its reputation, has been enough to demonize Murray for life among the Left. (I suspect that most of the students protesting hadn’t read Murray and Herrnstein’s book, but were just following the crowd). And, as always, once someone is invited through proper channels to talk at a college, I consider attempts to deplatform or disrupt them as violations of their free speech. College are, after all, places to debate ideas of all sorts.

Having failed to get his invitation rescinded (see my post here and here), the students deplatformed Murray during his talk, disrupting him to the extent that he had to move to an empty room and broadcast through closed-circuit television. And then, when he left the venue, they attacked him and his host, Professor Allison Stanger, pulling her hair and giving her a neck injury and a concussion. In the end 74 students were disciplined, though the extent of that discipline remains confidential.

Now, on the first anniversary of the melee, the student newspaper, The Middlebury Campus, marked the occasion by revisiting the talk so they could gloat that the issue hadn’t reduced applications to the College.  And on the front page they ran the photograph below, showing Murray onstage with Stanger before the disrupted speech.

I guess the paper’s editors didn’t realize that even showing a picture of Murray could be triggering, and so the paper’s chief editor had to apologize, or “explain himself” for running it!  Here’s a screenshot of editorial; click on it if you want to see the original. 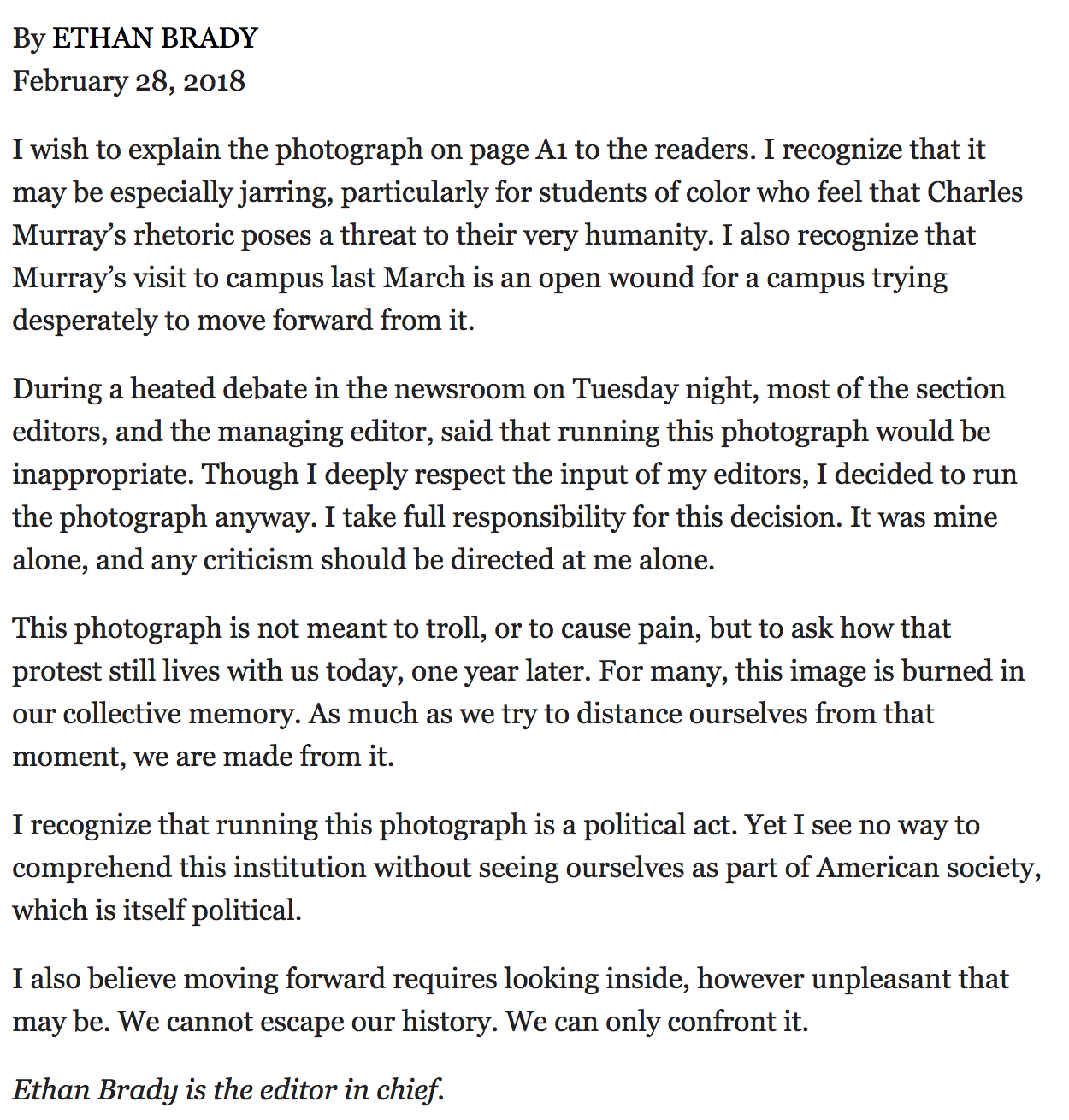 The editorial doesn’t seem to make any point beyond “asking how the protest still lives with us today, one year later.” Of course the photograph doesn’t ask that question at all, much less answer it. What is more telling is that the editor had to explain a damn photograph because he assumed it rubbed salt in an “open wound.”  Yes, I criticize Ethan Brady, but not for running the picture. I criticize him for being so much of a coward that he had to explain it—or was forced to do so because the other editors wanted to be exculpated from the triggering.

This is what we’ve come to: apologies for a photograph. You can imagine what a picture of Hitler illustrating a piece on World War II might do! Or even Woodrow Wilson, the old racist. This is how fragile the students claim to be.

At any rate, Murray seems to have taken it with humor, though he doesn’t think that his host’s injuries are so funny:

How about confronting that the woman in the photograph you can't bring yourself to name suffered a concussion and a neck injury that she still lives with? https://t.co/Xs8ZpxfkEk pic.twitter.com/iNxNiGKE7W