This is happening not just at the much reviled (and, I suspect, cash bleeding) HuffPo, but on many other pop news sites as well. “Twitter does this” or “Twitter says that”, the sites proclaim. Here’s one example from the site I love to hate (click on screenshot to see it): 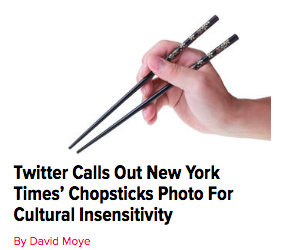 1.) There is no monolithic “Twitter” that expresses a unanimity or near-unanimity of opinion, as such headlines imply.

2.) The headlines reflect this sad fact: the author (in this case a Regressive Leftist) decides he or she doesn’t like something, and then trawls Twitter to find support for that opinion.

Yet for every case of support, there are cases of non-support. Just think about Trump and all the HuffPo headlines proclaiming that “Twitter thinks X” about Trump. They don’t look at opposite opinions—you’d have to go to Breitbart for that.

What author Moye really means here is that “some people on Twitter” criticized the NYT for portraying chopsticks in a culturally insensitive matter—clearly one of the overarching problems of social justice.

3.) The headlines reflect something else: lazy journalism. These “Tweetercles” are just a way of producing pieces of “journalism” without having to do any legwork. Just subscribe to a lot of Twitter sites, and pick out what you want from the feed based on whether it supports your preconceived ideology. Moye’s article contains 24 short lines of text sandwiched between ten tweets that themselves contain 19 lines of text. Remember, too, that Twitter is self-selecting: those who abhor something like misplaced chopsticks are more likely to tweet about it than those who don’t have an issue with it.

4.) This growing trend reflects a lack of journalistic diligence and integrity. Just pick and choose what you want from Internet, and voilà—you have an article that you can title “Twitter calls out X.” Whatever this is, it’s not journalism, but more like confirmation bias.

5.) As far as I can see, good journalism in newspapers and websites, and that includes the New York Times, is dying. I’m sure there are lots of good reporters out there, but how can they compete with clickbait that drags in views and bucks from those with limited attention spans? There are only about three halfway decent newspapers left in America, and I predict that even these will grow fewer in the coming years.

56 thoughts on “There is no monolithic “Twitter” that makes pronouncements”