I didn’t at all expect the outrage emitted by some news sites—all of them either conservative or religious—over my post about the morality of relieving the suffering of terminally ill, terminally deformed, or terminally diseased newborns by euthanizing them. I’m planning on a longer discussion of this issue elsewhere, but you can read a good argument for restricted infant euthanasia in the third edition of Peter Singer’s Practical Ethics, a book that’s of the best demonstrations I know of the usefulness of philosophy.

Singer, as you may know, has been both professionally and physically attacked for this view, including someone in Europe rushing the podium at one of his talks, snatching away his glasses, and stomping on them. There have been repeated calls for Singer’s firing from Princeton. The opposition, predictably, comes from the religious, the conservatives, and disabled people who argue that Singer’s ethics could have called for them to be killed. But virtually none of those disabled people would have been euthanized under a strict protocol, for if there was a chance they could live a decent life and not be too onerous to care for, there are many parents who would either care of them or find others to adopt them. Also, predictably, many of those who are outraged at the idea of euthanasia are just as outraged at the idea of legal abortion.

Of course I don’t think that all newborns—or those with mild conditions that can permit a life that’s not full of pain and misery—should be candidates for euthanasia. The notion should be limited to infants with conditions that will kill them soon or, with near certainty, within a few years, and will cause them to suffer. There should be strict conditions (parental consent, medical and legal regulations, agreement of physicians, etc.).

Right now let me just add that we see no problem with euthanizing terminally suffering animals—animals that, as far as science can tell us from neurology and brain development, are at least as self-aware and sentient as a newborn human. Why are human newborns different from an adult horse, dog, or chimp? There’s no reason I can see unless you’re religious and think we alone have souls. That explains the opposition by the religious and many conservatives, who tend to be religious. Human exceptionalism of one sort or another is at base of knee-jerk opposition to the idea of euthanasia.

Since I know all these sites are scrutinizing my every word, I’ll add one more thing: twenty years ago assisted suicide was just as demonized by the very same groups, but now it’s seen by many progressives as something that should be left to people’s choice under certain conditions. Giving people that choice is the right thing to do. It’s legal in several countries and three states, and it will become legal in more countries and states. Morality progresses, and it’s people like Singer—and cases like that of Terri Schiavo—that move our thinking forward.

What I don’t understand are all these people who seem to be in favor of infant suffering—the very same people who would find it merciful to euthanize a beloved pet if it were suffering to the same degree. In many cases the suffering is prolonged and the case hopeless. Why would anybody want it to go on? What good reason is there when a quick and merciful death is available? The same people who would have no opposition to turning off a respirator or withdrawing a feeding tube from a terminally ill infant quail at the idea of ending the suffering with an injection, despite there being no substantive difference between the two procedures (both involve decisions to do something, and both have a predictable result), except that the last one is often more merciful and causes less suffering.

Below are three of more than a dozen pieces (click on screenshot to go to link) excoriating the idea of infant euthanasia; I’ll put up a list soon. But now I understand the kind of unwarranted opprobrium Peter Singer garnered—just for trying to get people to put aside their knee-jerk reactions and religious indoctrination, and think about things. Ask yourself this: if an infant is born who is doomed to die within a few hours or even a few years, and will be suffering constantly the whole time, why would you want that pointless suffering to continue?

I urge these folks to read the New York Times story that inspired my own post, a piece provocatively called “You should not have let your baby die.” (What the author meant is that “you should have killed your baby.”) It’s a poignant argument for infant euthanasia, but one that’s implicit  in the sad story it recounts. 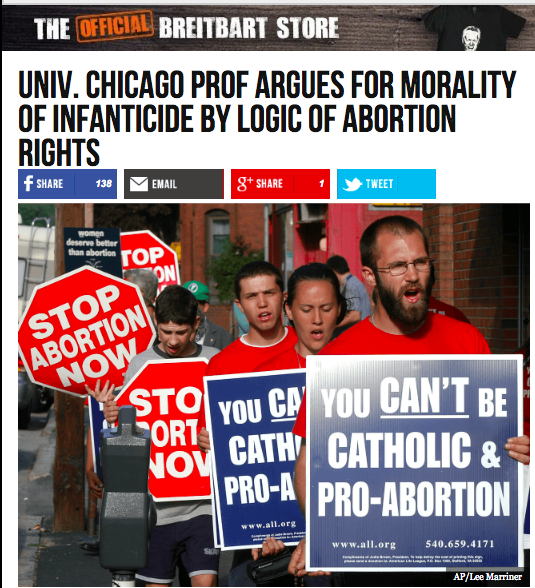 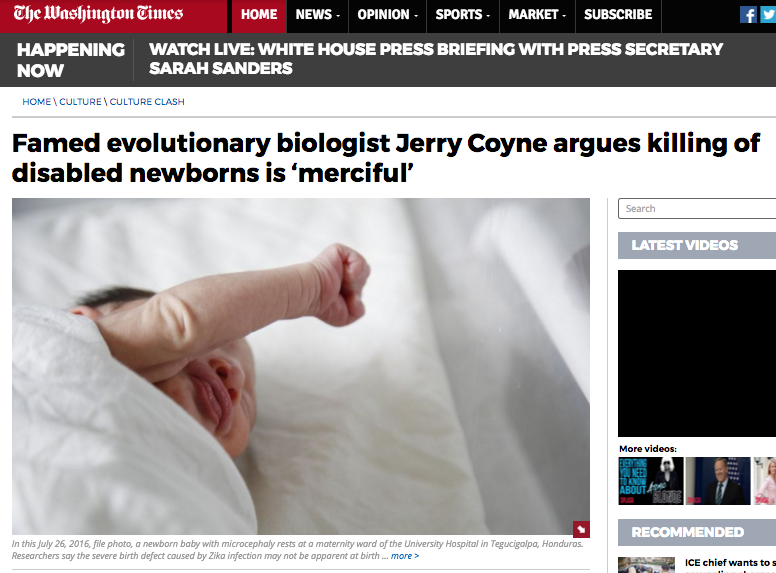 And the emails are coming in: here are three that arrived in the last 30 minutes (I’m writing this on Thursday afternoon). I reproduce them as written, omitting the email addresses out of kindness. But I reserve the right to publish the email addresses of anyone who is threatening or  really vile.

Greetings Dr. Coyne:
Congratulations on spelling out the actual thoughts of those who embrace evolution and determinism.  In this paradigm it doesn’t matter whether we kill babies, run over old people, or use nuclear weapons – after all the fittest will survive.  Should all of humanity die at least.a new species will emerge from another source and that species may prove more capable of adapting.
In the meantime, let me say, I once embraced this narrative but now everywhere encourage people to consider the following, “For God so loved the world that He gave His only begotten Son that whoever believes in Him should not perish but have everlasting life.”
All the best,
Steve Coplon

And a vile email from Bill Harlan (joggin55@hotmail.com) with the title “You should”:

Have been euthanize and aborted, because your brain is messed up like a dog or a cat. You have no concept of life as they do.

This one was headed “new borns”:

Dr. Coyne: Your idea of the morality of destroying a severely handicapped new born only makes sense to those who are severely handicapped spiritually.  When Christ is removed as one’s moral authority, then one starts his presupposition as you did with the erroneous idea that abortion is not immoral.  Believe it or not there is a universal standard of morality by which we will all be held accountable, which is Christ, and I sincerely hope that you will come to that understanding.

Here’s a lovely missive, unsuccessfully attempting to disturb my evening by calling me a Nazi. This one I consider vile because of the last sentence:

So infants are basically no different than cats or dogs. Neither has any concept of death. And we don’t have a problem euthanizing dogs and cats. So if religion would just disappear (get out of the way)…bingo, no more problems euthanizing the young? , the old?, the ????.
Professor Coyne, you are one sick member of the human race.
I see very little difference, if any, between your logic and that of the German Nazis when they decided the earth would be much better off without any Jewish people. Just my opinion but I would suggest the earth would be much better off without you and your “intellectual superiority”.

Want more? There are lots of comments on the articles listed above, and other articles, and they’re not pretty.