Just when you think Bret Weinstein’s demonization at The Evergreen State College couldn’t get any worse, it does. Now a group of cowardly and presumably Jewish students have written  “A letter to Bret Weinstein from some Jews bent on the destruction of White Supremacy“. They sign the letter “Some Jewish students at Evergreen bent on the destruction of white supremacy”, but of course won’t give their names. The letter is particularly invidious because it uses Weinstein’s Jewishness—like me, he’s a secular Jew with ancestral roots in Russia—to further accuse him of racism.

Remember, this all came from his writing an email to the faculty and staff (and the diversity authorities) saying that he wouldn’t join other white people in leaving campus on “The Day of Departure”. (If you think that absence was purely voluntary without any coercion, I have a bridge in Brooklyn I’d like to sell you.) And this despite Weinstein’s long history of progressivist and anti-racist activism, including participating in the Occupy movement.

The letter, which you can see at the link, is too long to reproduce here. Is it genuine, and was it written by Evergreen students—and Jewish ones? I can’t be completely sure, but I’ve found that 1) the site, Medium, is where Evergreen students publish their demands that they wish to make public; and 2) more important, the letter was circulated to the school’s faculty and staff by Evergreen professor and political economist Peter Bohmer, who wrote at the top of his email, “Please read this powerful letter by some Jewish students!”  (See Bohmer’s letter of solidarity with the students and criticisms of Weinstein here.) Bohmer’s circulating the letter gives it more credibility; he may even have had a part in its composition. Curiously, and perhaps tellingly, at the bottom of the letter circulated by Bohmer via email—but not the published letter—appear these phrases:

Why these words appear in Bohmer’s circulated version and not the published one is interesting; I suspect they were eliminated before publication. After all, what this is really about is the students trying to divert attention from their own thuggery and childish behavior onto Weinstein. If they continue to demonize him, they think, the spotlight will remain on him and not them. Right now, what happened to Weinstein, and the events on campus, have made Evergreen look bad to nearly everyone, and drawn unwelcome attention to a small college previously unknown to most Americans. The school’s reputation, enrollment, and dollar intake are in danger. The protestors, and perhaps the faculty, are starting to realize that things aren’t really going their way; and, as Regressives tend to do, they double down, desperately heaping more opprobrium on Weinstein. This letter is part of that effort.

The letter is headed with this symbol: 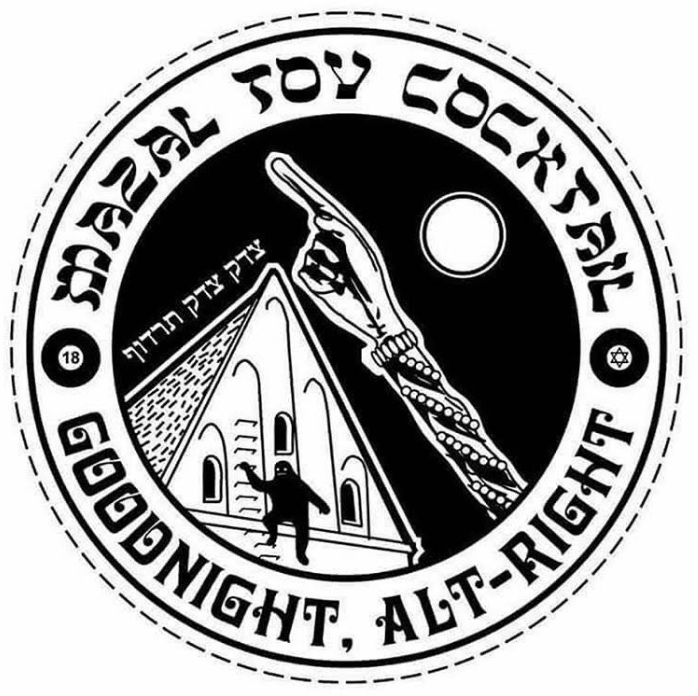 It starts with the dubious assertion that “all Ashkenazi Jews are not white” (they presumably mean, “not all Ashkenazi Jews are white”, but who ever said they could write?). And that latter claim may be true, but I’d bet that 99% of them aren’t People of Color, though Ashkenazis were often treated as an inferior group. But that is irrelevant; what the students accuse Weinstein of doing, and what he’s never done, is to take refuge in his secular Judaism to argue that he’s not a racist. Nor has he ever promulgated “anti-black language and behavior” as the letter claims.

We want to talk about the ways that Weinstein is positioning himself as a Jew to invalidate the claims of racism being raised against him. We want to examine Bret’s invocation of his Judaism as a prop upon which his anti-black language and behavior has rested. We must speak about this because if we remain silent we accept this unacceptable usage of our shared history.

This is not an isolated incident. This is about Weinstein, but it [sic] also about white Jews acting in complicity with and upholding white supremacy, passively and actively. We seek to counter Bret’s narrative and de-center his place in the wider struggle against institutional racism on campus and beyond.

Well, if blacks have ever had any friends among whites, it’s the Jews, who played a huge role in the civil rights movement of the Sixties. Of course some Jews are racist, but to accuse them as a group of being “white supremacists” is simply wrong. But of course these students are deeply ignorant of history: they get their narratives from their peers, their professors, and Facebook.

The letter then claims that Weinstein is playing the victim, and if you’ve seen his interviews with Tucker Carlson (a new one is below), Joe Rogan, and Dave Rubin, you’ll know that’s a lie. Then, after saying that Ashkenazi Jews are People of Color, they accuse Weinstein of racism because he is not black (I presume they’re saying that HE is ignorant of his genetic heritage). Note the use of the regressive term “lived experience”, which according to postmodern ideology takes precedence over mere facts:

Bret has attempted to position himself as a victim. It wouldn’t take much for Bret to apologize, but he has held fast to his seemingly innocuous position of victimhood, and in doing so has highlighted some of the ways that liberal racism functions. Here we can learn something about how not to react when claims of racist behavior are raised against us.

. . . Something that Bret may be trying to get to when he talks about himself as a Jew is that Ashkenazi Jews have not always been considered white. This is true, and is very important to think about.

. . . However, the fact that Jews have not always been enmeshed in whiteness does not negate the fact that today many Jews in this country benefit from and uphold white supremacy. Additionally, we know that the past experience of anti-semitism and oppression of our ancestors does not mean that we are incapable of reproducing harmful behavior. Much less does it mean that we as Jews are the singular authority on what does and does not constitute racially motivated subjugation in a different historical and social context. We can understand that those who experience trauma can perpetuate harmful behaviors and reproduce traumatizing conditions.

So when Bret says that he cannot possibly be racist because he knows what it is like for his people to be oppressed, what we hear is a negation of responsibility and a gross misuse of the history and suffering of our ancestors. The lived experience of white Ashkenazi Jews and the lived experience of black people in the US is drastically different and cannot be equated, and by doing so Bret refutes both experiences. Anti-blackness and racism in general are pervasive amongst white Jews. In combating white supremacy, we are combating the roots of anti-semitism.

After further babbling, the students declare that Weinstein has put them in danger! How, exactly, can that be the case? After all, it is the thuggish regressive students who are roaming the campus with baseball bats looking for people to beat, and it is Weinstein and his family who have had to flee their home because of threats—and the declared inability of the police to protect them. Have a gander at this malarkey:

The way to address racism is to be willing to engage in honest conversations about it, and be willing to admit to where it lives within us. Bret’s refusal to engage in conversations about his own racism has put many Evergreen students in legitimate danger. We will not allow him to invoke our history, the history of our ancestors, as an excuse for his vile and inexcusable behavior. We, Jewish people, wish to express our unequivocal support and solidarity with undocumented, Latinx, black, MENA [people from the Middle East and North Africa] and Arab, Native, disabled, and trans and queer students, staff, faculty, and residents of the surrounding Olympia area. Bret Weinstein is wrong, he has put you in danger, and we will not allow him to hide behind our histories in order to dodge responsibility for his abhorrent and reprehensible words and actions.

It is these students’ unwillingness to engage in honest conversations, which is what Weinstein has always called for, and their demands that he apologize and conform to their own ideology, that has put Weinstein, the campus, and other students in danger. How dare these thugs take the moral high ground? I have nothing but contempt for students too cowardly to even sign their names, and also for Professor Bohmer, who circulated their letter with approbation.

The only remaining mystery is who wrote the last three sentences in the letter calling for Weinstein’s firing, and why they were left out of the letter that appeared online.

Here’s Weinstein’s latest short interview on Fox News with Tucker Carlson (who admits his politics are very far apart from Weinstein’s). It aired two days ago.  Weinstein, of course, has been accused by regressives of being an alt-righter because he appeared on Fox News, but it’s mainly the conservative outlets that pick up these stories. (I have yet to see Weinstein interviewed, or even mentioned, on NBC, ABC, or CBS.) And even Christopher Hitchens appeared on Fox News.  This accusation of where one does interviews as a sign of political comity is simply another attempt by Evergreen students and staff to turn the unwanted spotlight of opprobrium from themselves onto Weinstein.

Carlson asks Weinstein if he’ll return to Evergreen; Weinstein responds that he has further duties at the school, but adds “I don’t know how I can go back and teach given that I have been portrayed as the reason that Evergreen is in crisis.” I have predicted that his days at Evergreen are numbered; and it’s too bad for that school, where Bret and his wife Heather Heying were highly rated as teachers by the students. Now who, exactly, has been endangered here? Weinstein and Heying may have to leave their jobs, but I doubt that a single Evergreen student will be disciplined by the College. If they were, the rioting would get even worse!