I’ve written about dumb papers connecting Halloween pumpkins and Pilates with racism, and about how “feminist glaciology” could expel patriarchy from geology, but the paper I’m about to highlight takes the cake.

1.) I have never been so ashamed to be an academic, and

2.) This paper is the kind of “scholarship” that is making university studies of feminism—and of much of the humanities—look ridiculous. This kind of work should be criticized and mocked not just by feminists themselves, but by biologists and academics of all stripes. It shows the enormous waste of time and intellectual energy that have resulted from the incursion of postmodern thought into humanities departments.

There. . . I feel better now. On to this paper, published in a recent issue of Gender, Place & Culture: A Journal of Feminist Geography. Get the link by clicking on the title screenshot; it should be free if you have the free and legal “Unpaywall” app.

Here is the abstract, packed to the gills with postmodern and obscurantist jargon. Read it! 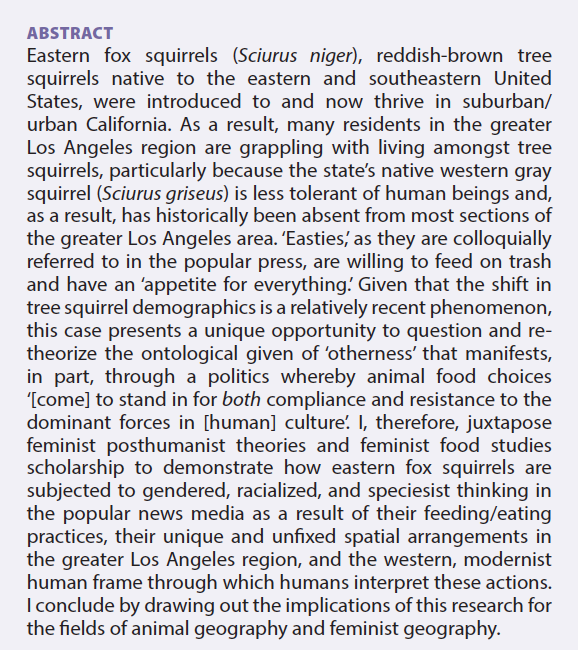 Now, what is Lloro-Bidart’s argument? To paraphrase Mencken reviewing Thorstein Veblen, “What is the sweating professor trying to say?”  As far I understand it, here’s her argument, starting with some squirrel biology:

From these bald facts, Lloro-Bidart did “field work,” combing magazines and newspapers for mentions of the squirrels. She also studied and conversed with others at what she says is her “current fieldwork site, an urban community garden in the greater Los Angeles area.” From these researches, whose conclusions were of course in no way predetermined (LOL), Lloro-Bidart concludes the following:

“As Bourdieu emphasizes in Distinction and feminist geographer Guthman elaborates on in her research on the alternative food movement in CA, eating is not simply a physiological requirement, but a performance that reflects taste, gender, race, culture, and class position. Depending on the cultural circumstances, those who do not eat ‘properly’ sometimes become the target of racialized discourses  DuPuis elaborates on the second point by highlighting how the complex relationship between food and the body is deeply intertwined with the history of American political reform.

. . . Those otherized as improper eaters for a variety of reasons – the impure – frequently become the target of various gendered, racialized and/or neoliberal discourses and policies to alter their eating habits – supposedly for their own, society’s, and sometimes animals’ wellbeing.”

They’re squirrels, for crying out loud, not humans! The analogy is forced to a predetermined conclusion.

“Although none of these statements directly holds female squirrels accountable for these eating practices, they are gendered by implication: female squirrel bodies are those that physiologically deliver litters twice per year (not males), individualizing their bodies as the units of reproduction; in population ecology the term ‘fecundity’ refers to the ‘maximum potential reproductive output of an individual (usually female)…and feminist scholarship has demonstrated that ‘reproduction’ and ‘procreation’ are frequently [and negatively] associated with the human female body, which is constructed as closer to nature.

“While feminist scholarship has examined and critiqued how female animal bodies are uniquely enrolled in industrial farming (e.g. they produce milk for dairy production and, as a result, nursing mothers are separated from their young), feminist research on exotic/invasive species has only minimally considered the manifestation of more implicit gendered reproductive narratives, including how they are discursively connected to eating practices.

“Thus interpreted, these narratives intimate that eating and female fecundity are indeed intertwined, as the foreign squirrel is ultimately successful because she will eat everything, including bird eggs, baby animals, and trash in order to reproduce and outcompete the natives. Not unlike the discourses pervading the literature on feral cats, which suggest that withholding food from female cats is a desirable strategy for decreasing reproductive success, or new research in fat studies that unpacks how fat mothers unfairly shoulder blame for the obesity epidemic as what they eat literally becomes what their children will eat and become these statements, contextualized within the articles in which they appear, discursively perpetuate the notion that eastern fox squirrels are what they eat, i.e. inappropriate squirrel subjects like the inappropriate foods they choose to dine on in southern CA. As feminist food studies scholar Cooks highlights, the metaphor of food as body ‘individualizes the body as the unit of consumption’ and ‘prescribe[s] gender identities via what and how we eat’  Although the female squirrel is not overtly named in these articles, her body and identity thus become gendered as she consumes (eating everything) and reproduces improperly (delivering two litters per year).”

So here we have an intersectional feminist analysis of eating, reproduction, speciesism, racism, and marginalization. The paper goes on like this for 17 pages, and I was much relieved to reach the end.

But to what end was also this tortured analysis? As best I can make it out, it’s to show that we need to de-otherize squirrels and free the Fox Squirrel from its marginalization, allowing all squirrels, regardless of diet, reproduction, and habits, to live in harmony. In other words, Lloro-Bidart is calling for Social Justice for Squirrels. I conclude that from this passage:

These questions have important implications: Instead of characterizing eastern fox squirrels as nest robbers and trash eaters as specific detrimental meanings are attached to the foods they eat (and what their bodies do with these foods, such as deposit scat and plant trees or produce ‘too many offspring’), they demand a reconstitution of human interpretations of these squirrel-food becomings not in speciesist or gendered terms, but through an opening up of the category ‘squirrel’ so that many kinds of squirrels – and other beings – can flourish in suburban/urban spaces.

Of course, “opening up” categories like “squirrel”, and calling for harmonious squirrel diversity, neglect the possibility of invasive species destroying natives, as is happening in New Zealand, where “opening up the category of ‘vertebrate'” could lead to the extirpation of that land’s birdlife, or opening up the category of “plant” could destroy much of the native flora. Not all plants and animals can or should live in harmony.

But Lloro-Bidart is pretty sure she’s on the right track, because she talked with one of her enlightened friends at her “field site” (the communal garden) and that friend didn’t otherize the fox squirrels:

“To provide an example of what this flourishing might actually entail, I briefly turn to my current fieldwork site, an urban community garden in the greater Los Angeles area. This garden, like many suburban/urban spaces in the area, now supports a small eastern fox squirrel population that drops in from utility lines to feed on fruit trees. At the time of the informal conversation depicted below, the Garden Director, Isabel, resided in a suburban neighborhood approximately 5 miles from the garden. We had already discussed the garden’s squirrels several times – and also chatted about many other creatures, including Isabel’s rescue rabbits and pitbull and the resident garden birds who planted sunflowers every year. Prior to leaving this day, Isabel lamented about moving (she was going to miss her backyard western scrub jays, Aphelocoma californica), and animatedly told me about an encounter she had witnessed between a western scrub jay and an eastern fox squirrel in her backyard,

As I’m getting ready to leave the garden, Isabel and I end up chatting about squirrels. Since I have been enmeshed in doing analysis for my squirrel research project, Isabel’s story began to sound very familiar. She had apparently witnessed, for the first time, a scrub jay chase an eastern fox squirrel away from what she was sure was the scrub jay’s nest given that scrub jays nest every year in the bottlebrush plants that line her yard. Excitedly, she shared that she couldn’t believe that the bird was so relentlessly pursuing the squirrel.

“In contrast to the characterization of eastern fox squirrels as ‘nest robbers’ in the popular press, Isabel was not at all disgusted with the squirrel’s actions. Instead, she appeared entertained by the encounter and was quite surprised that a bird would so aggressively defend her/his nest from a squirrel. While in this case the eastern fox squirrel did not appear to actually make off with an egg or nestling, and if s/he had this might have changed the story Isabel told, her retelling of this encounter suggests a willingness to capture and grapple with animal agency (both eastern fox squirrel and scrub jay) – and her own.”

I needn’t rant much about the enormous waste of time this paper involved, and the enormous waste of paper (or electrons) its publication entailed, for the paper discredits itself. But of course this is the stuff that many professors in the humanities—deeply infected with postmodernism, poststructuralism, and other “posts”—are expected to extrude: bad ideas couched in unreadable prose.  This paper rates up there with the whiteness of pumpkins and the racism of Pilates as one of the most ridiculous academic exercises of our era.

I close with the author’s amusing “acknowledgement” section. Look at the last sentence—squirrel lived experience! (That’s opposed to squirrel non-lived experience, of course.):

Now I have some experts in my building: the Eastern Grey Squirrels (Sciurus carolinensis) that I interact with daily. I showed Lloro-Bidart’s paper to one of them, who looked at it al fresco, but then, horrified by accusations of otherizing and fat-shaming, she retreated in disgust. Here’s the sequence of photos:

Thank God I was a scientist and didn’t have to deal with this stuff in the humanities. (I hasten to add that, of course, not all university humanities work is like this!)