My visit to Taumaruni and fellow atheist “blogger” Heather Hastie ends tomorrow when I take a bus to Auckland, where I’ll stay for six days before flying home. Heather was kind enough to take me to several local areas of interest, and I’ll do two posts on the area.  Two days ago, we did a double header, going to the Otorohanga Kiwi House to see local animals, including of course kiwi, and then to the famous Waitomo Glowworm Caves in the eponymous town. There are glowworm caves and sites all over New Zealand, but Waitomo is the most famous one, and is but an hour away from Heather’s town of Taumaruni.

We made it to Otorohanga in time to see the feeding of kiwis and of the two sister species of parrot, kea and kaka. It was pretty easy to see the kiwi eating as the twilight in the facility (the birds are nocturnal) allowed good visibility. The birds seemed to prefer rooting around in the soil to eating the food in their dish. (Perhaps it’s just instinct.) I couldn’t photograph them because it was too dark, but here’s a bill of a stuffed North Island Brown Kiwi (Apteryx mantelli), showing a unique feature of this group. Do you know what it is? (Answer below). 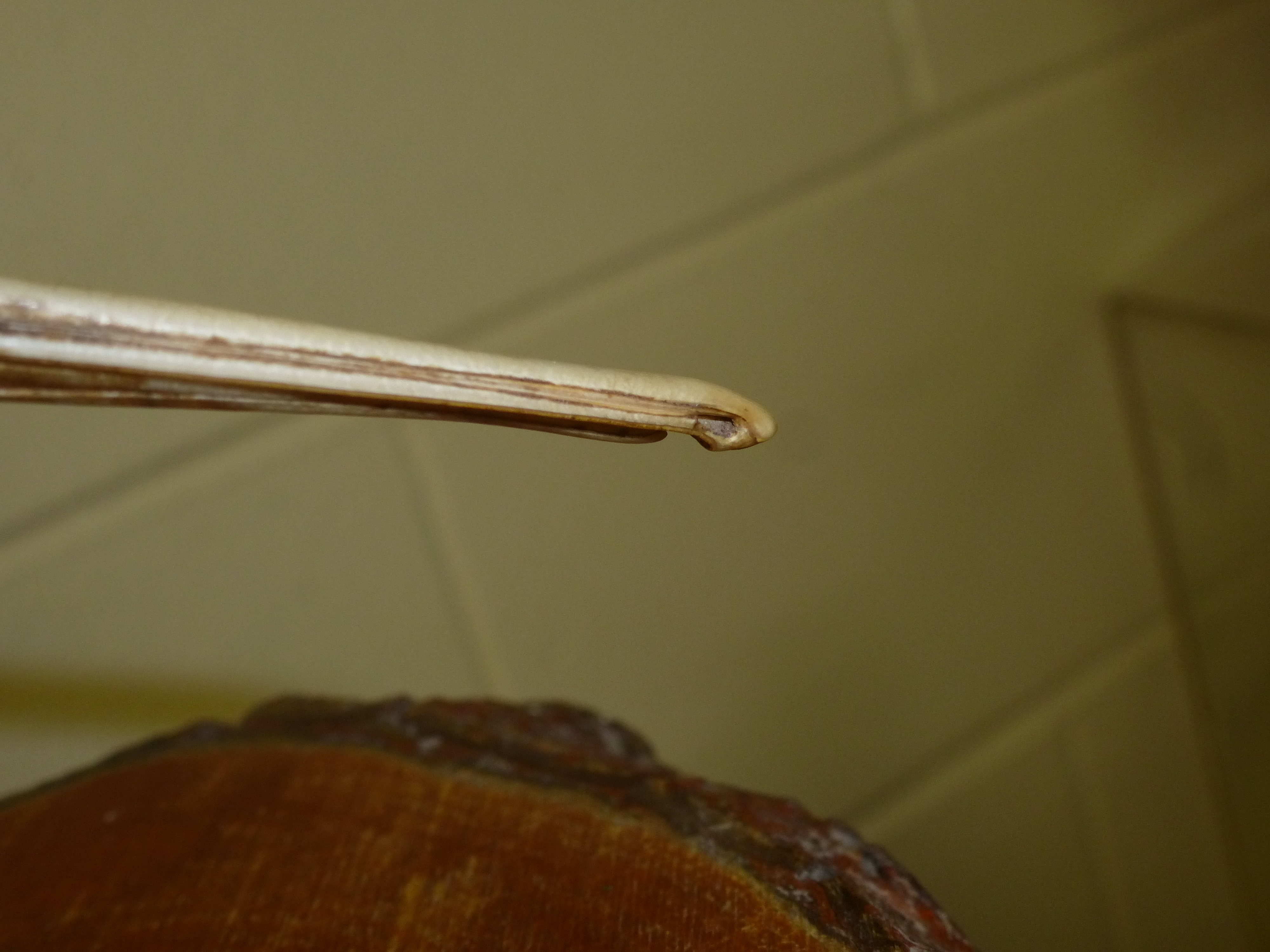 Kiwis are, I’m told, the only birds in the world that have their nostrils at the very tip of the beak. That’s undoubtedly because they forage by thrusting that long beak into the soil to grub for worms and insects. Because that clogs the nostrils, there are also baffles in front of them to prevent too much clogging of the nasal openings, though I’m told the birds have to keep snorting to clear their beaks while foraging.

Here’s a little brown kiwi photo taken from Birding New Zealand. The birds are endangered by introduced predators, and at this and other facilities kiwi chicks are reared from eggs taken from the wild and hatched in incubators (the wild parents breed again and the second egg is left in the wild). The success rate of kiwis becoming adults from eggs left in the wild is only 5%, while it’s 80% and up for eggs raised in captivity.

When the baby kiwis reach the “magic weight” of 1 kilogram, at which point they can defend themselves from all introduced predators save dogs, they are released back into the wild. The nickname for New Zealanders is, of course, “kiwis”, so they have a special interest in preserving these endangered birds (there are five species recognized). 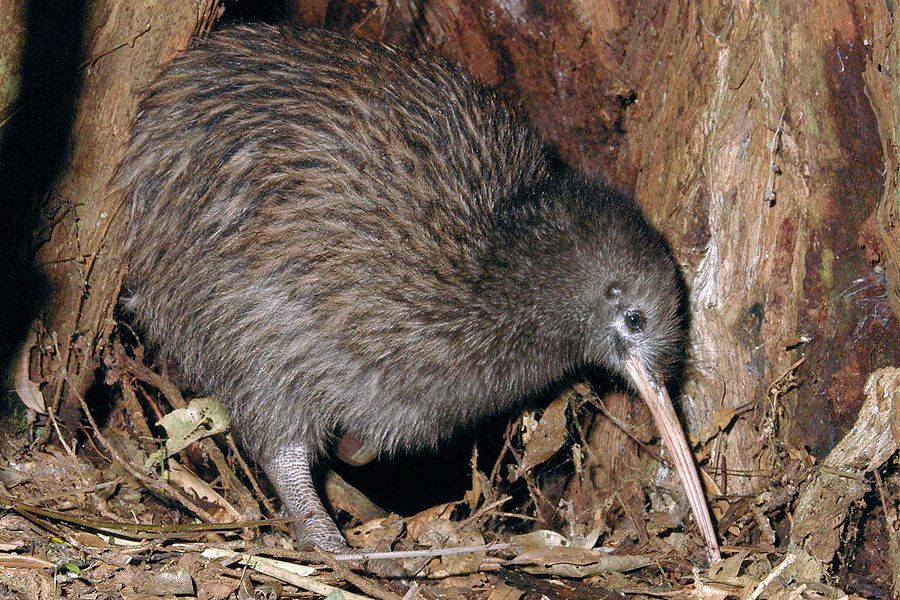 We bought duck food at the entrance, so it was legal for me to feed this very rare and endangered bird, the Campbell Island Teal (Anas nesiotis). It is flightless.

Read the “Conservation” section of the link to show how this bird was saved. 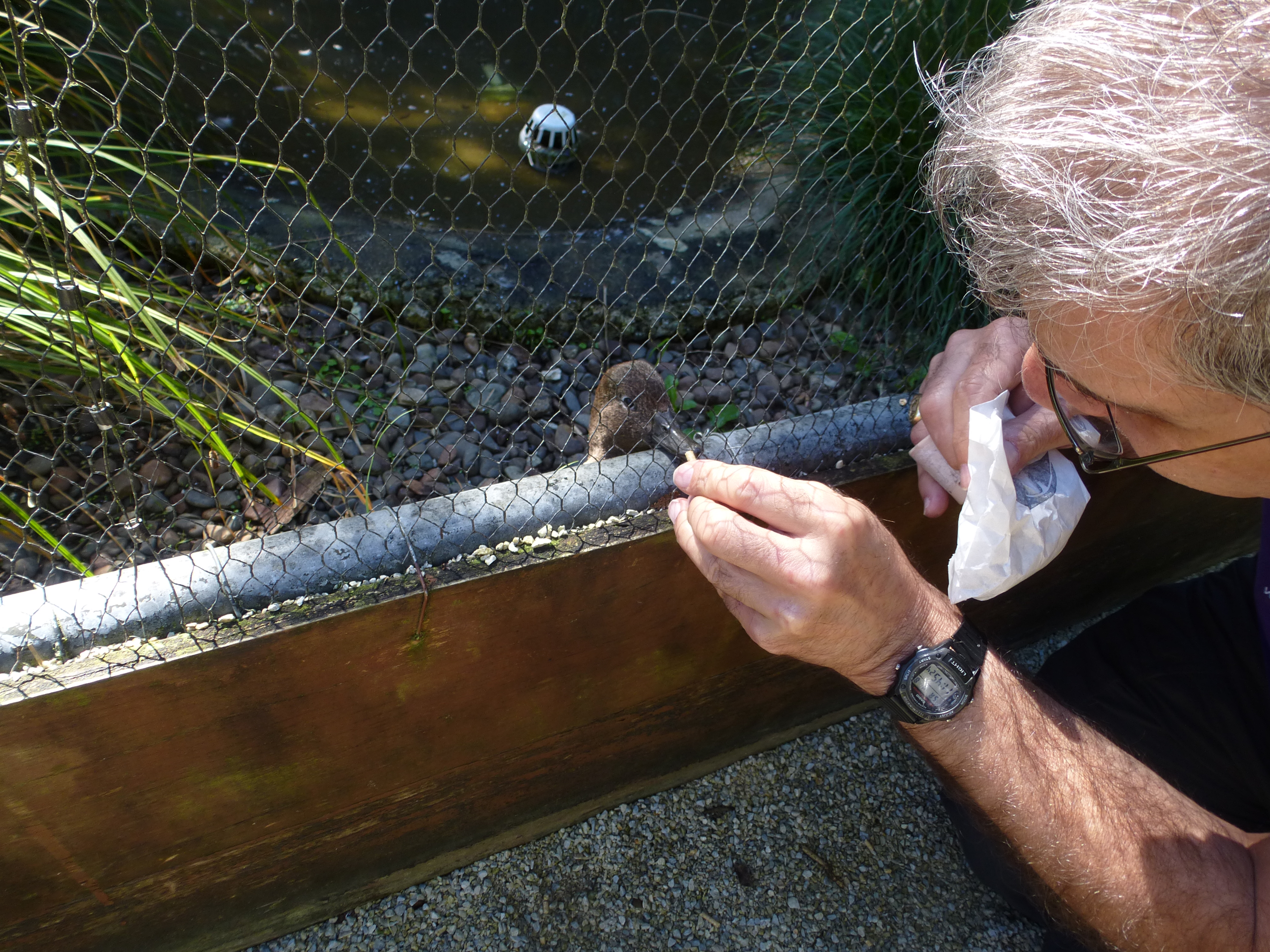 I couldn’t get a good picture of the bird through the cage, so here are four of the teals from Wikipedia: 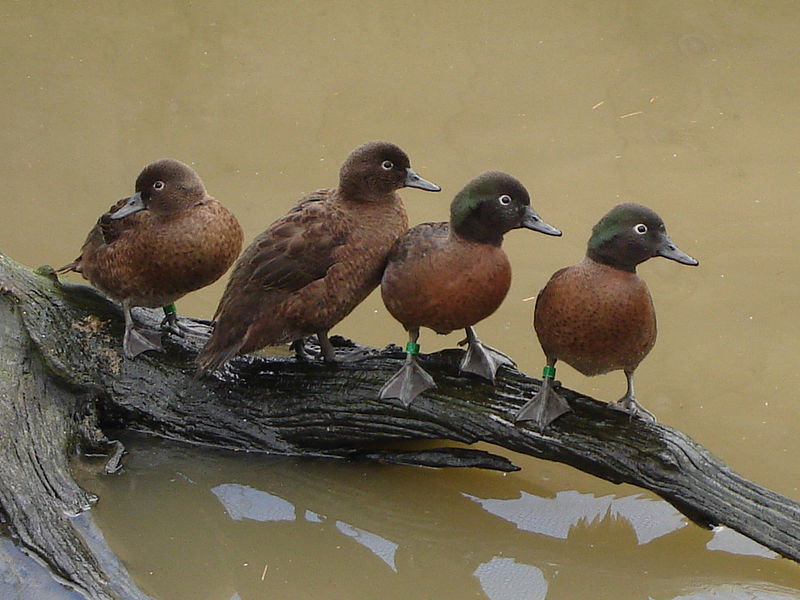 A bird we’ve seen before, the kākā, (Nestor meridionalis). They were fed a mixture of fruits and “nectar” (a sweet liquid). While I was photographing this one trying to pick the lock, it nipped me with its beak. It was only playing, though, and it didn’t hurt: 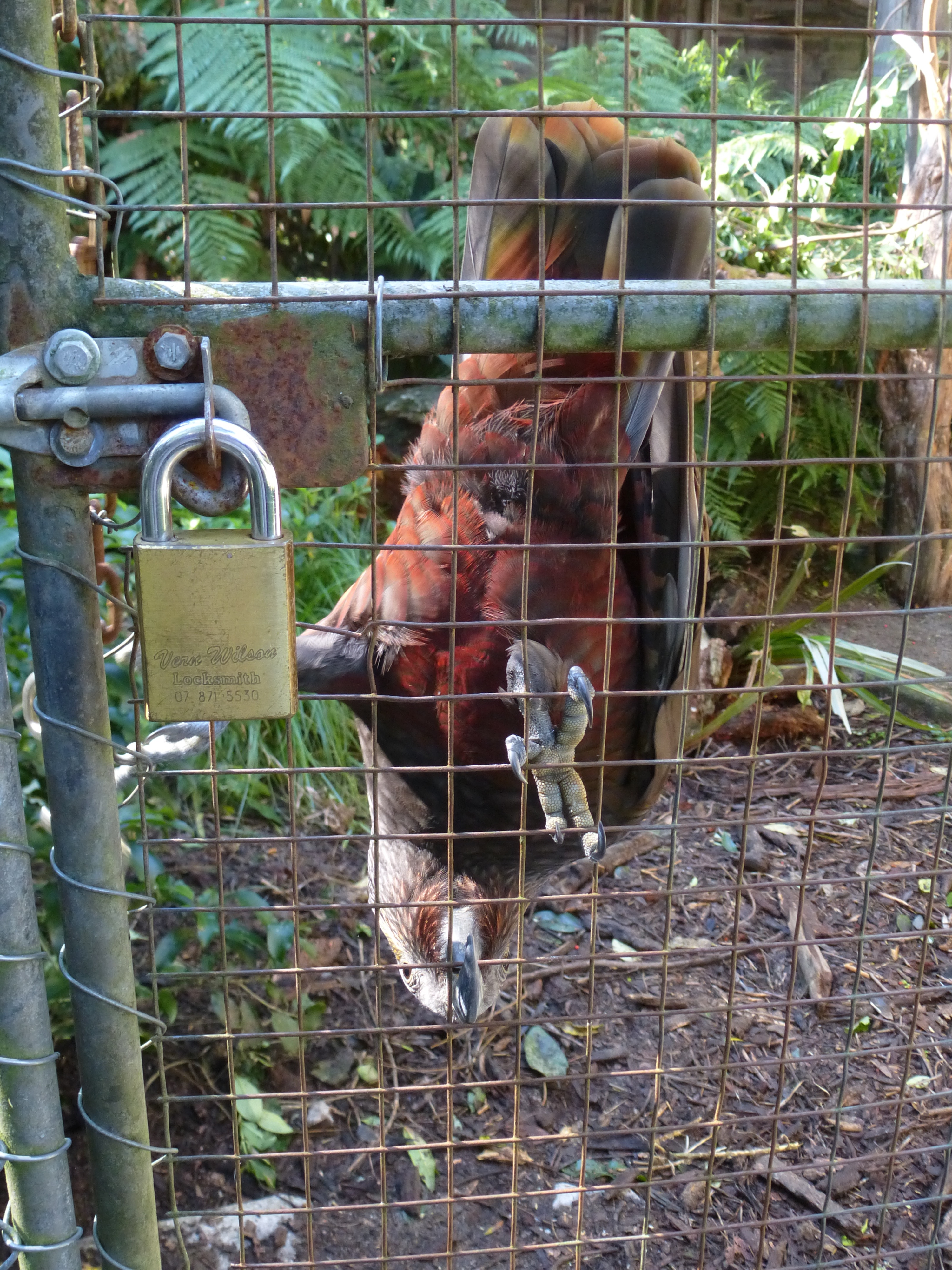 And the chick of a kea, my favorite New Zealand animal so far (I haven’t yet seen a kakapo, the flightless parrot). The two pictures of the chick below show the first kea chick hatched in captivity in 40 years. 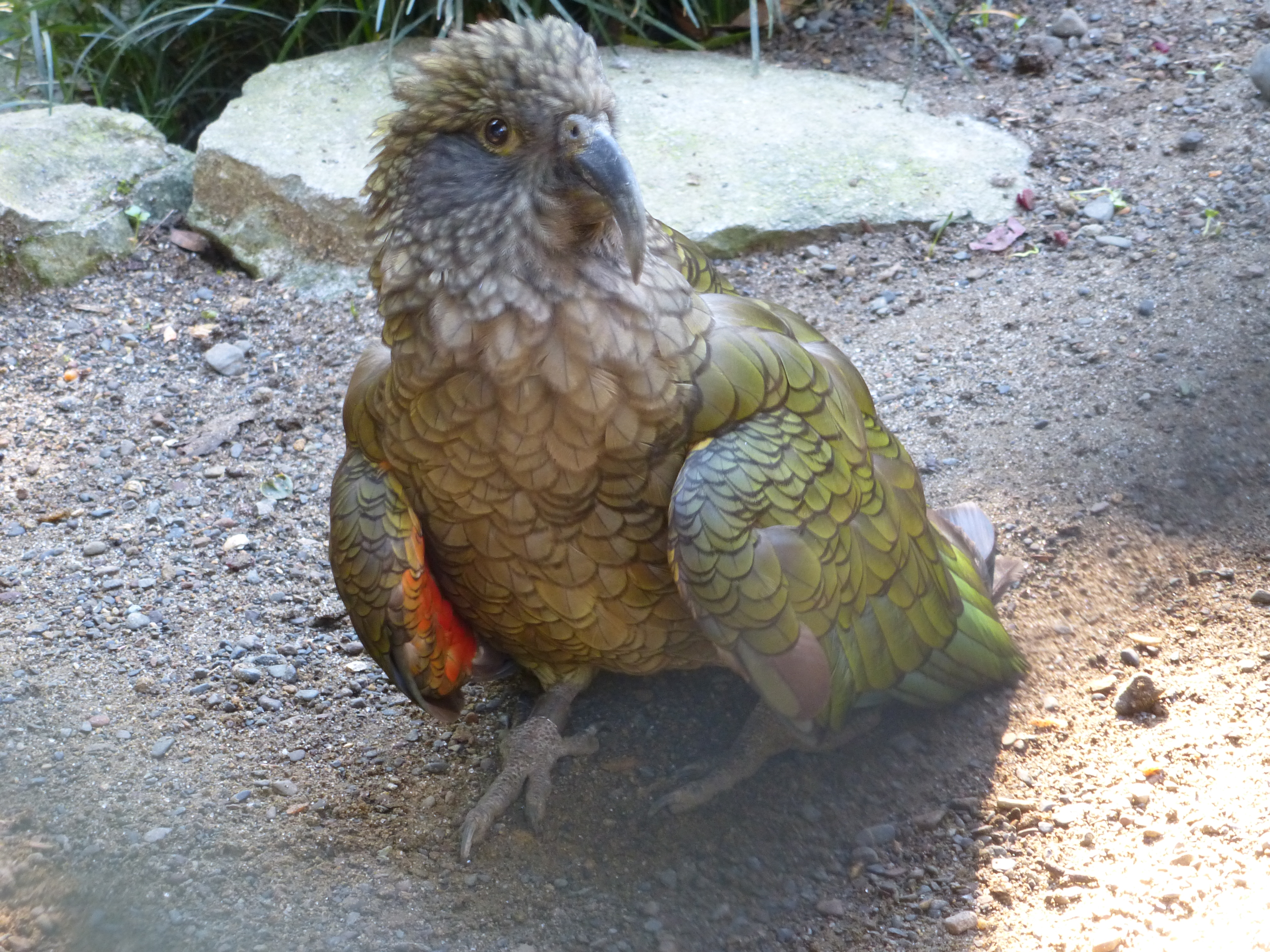 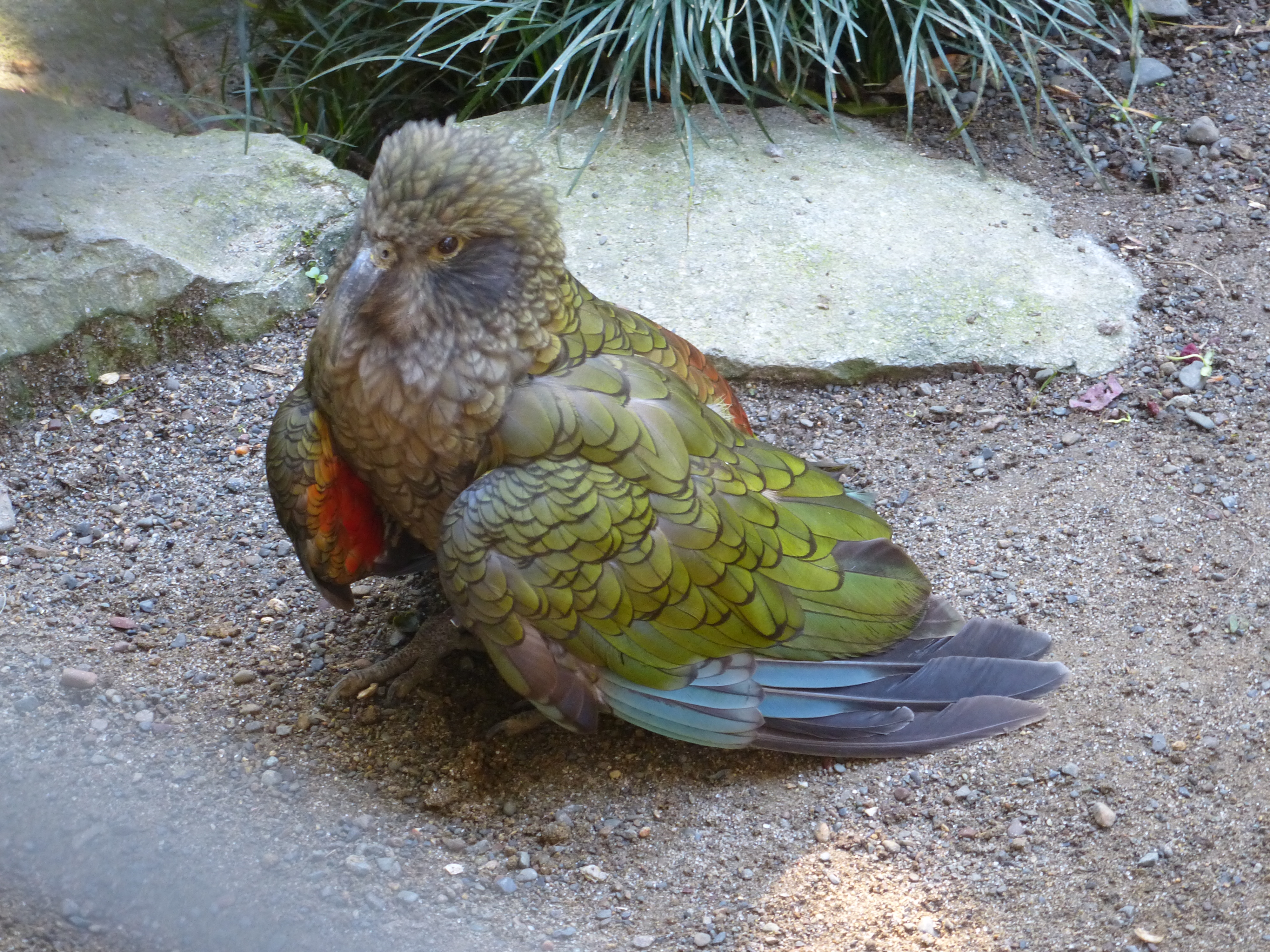 An adult kea eating a piece of apple. These were fed fruits and vegetables. 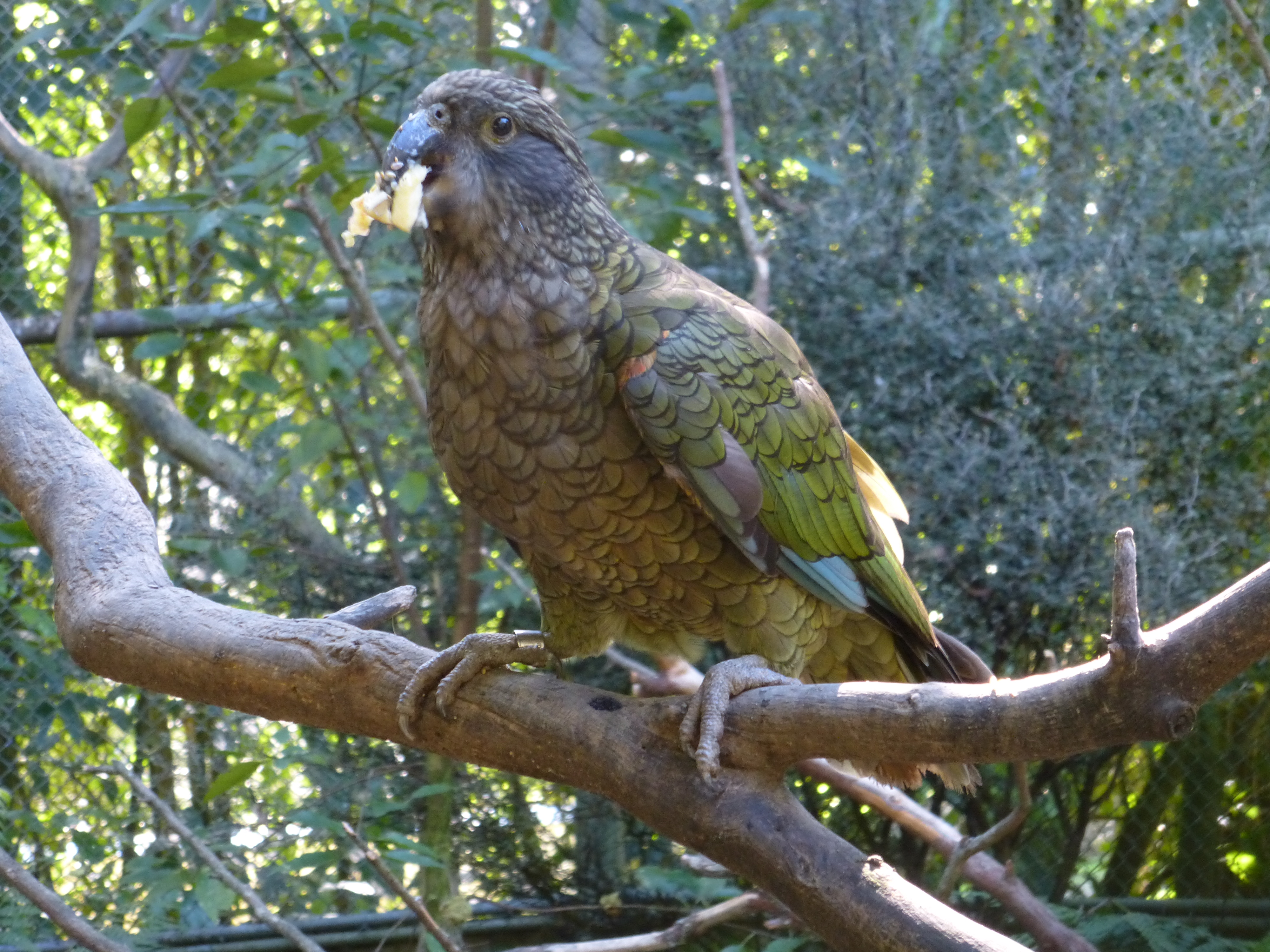 A lovely New Zealand pigeon, or kererū (Hemiphaga novaeseelandiae), a fruit-eater and the only bird now capable of dispersing the seeds of the few New Zealand native trees that bear large fruit. It is a threatened species. 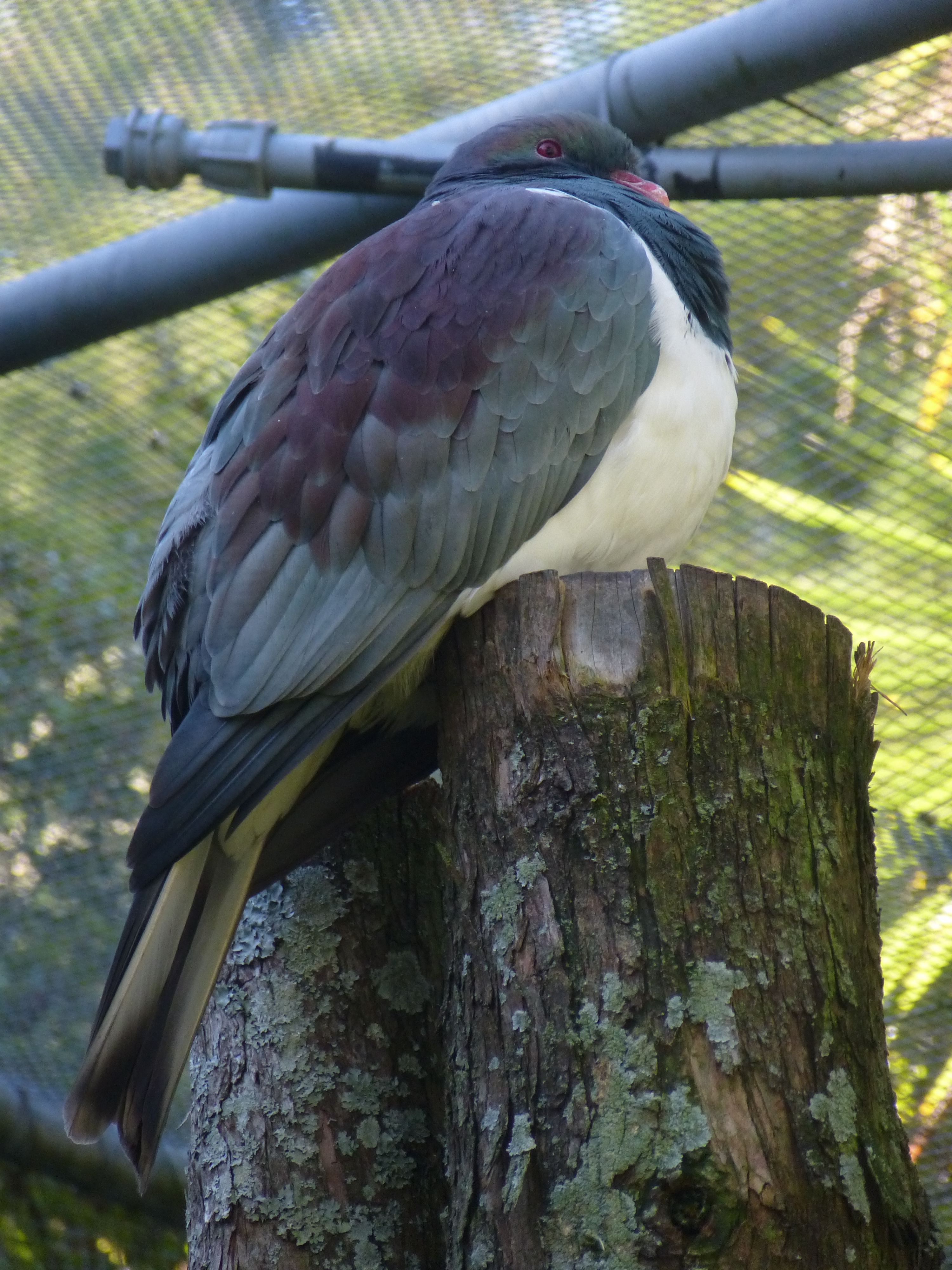 I forgot this bird and can’t be arsed to look it up, except that I remember it’s not a New Zealand endemic. I’ll let readers have the fun of identifying it: 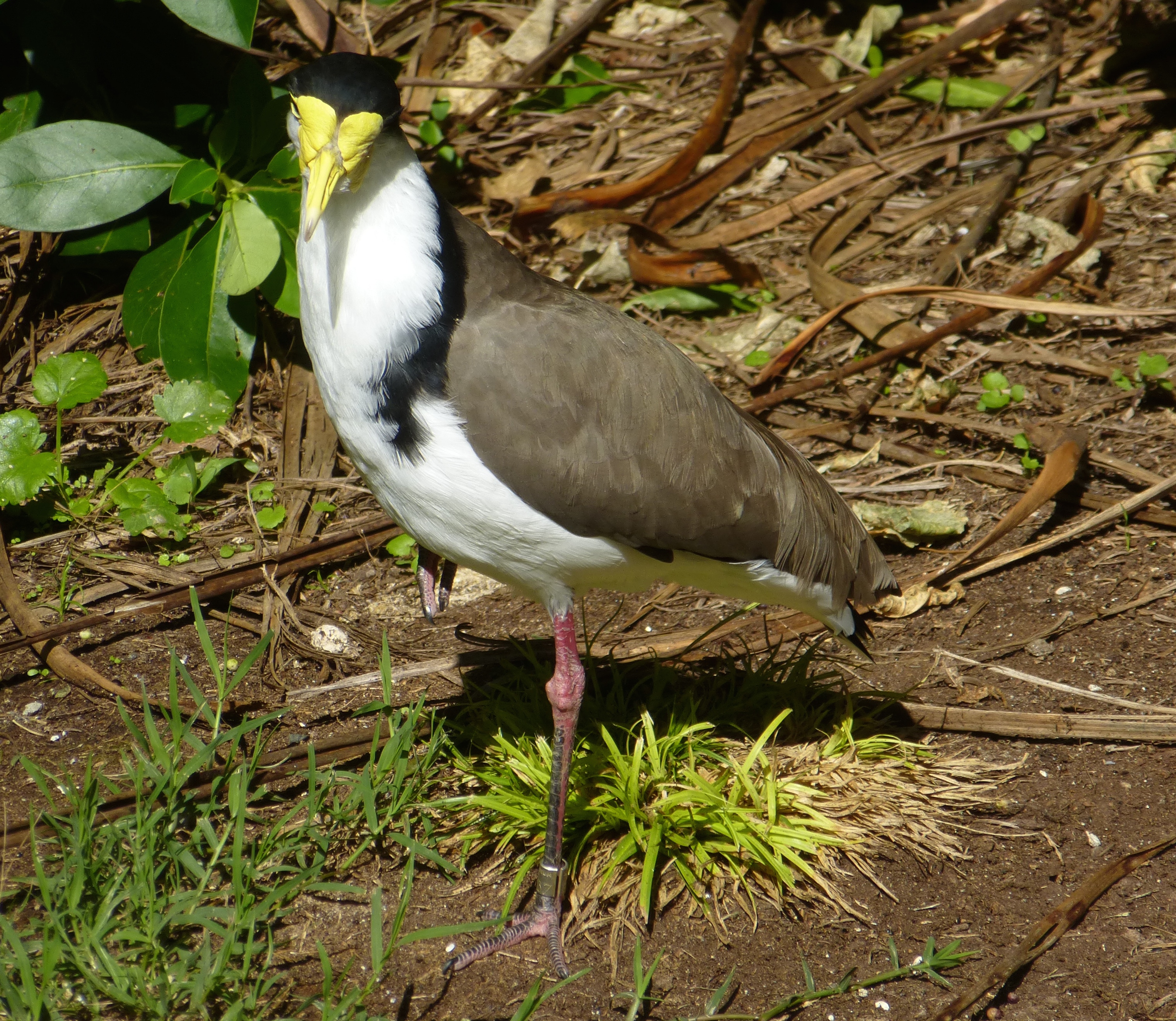 My favorite endemic duck in New Zealand—the paradise shelduck (Tadorna variegata, Māori name pūtangitangi). The species has a striking sexual dimorphism. The next two pictures show a male and female; can you guess which is which? 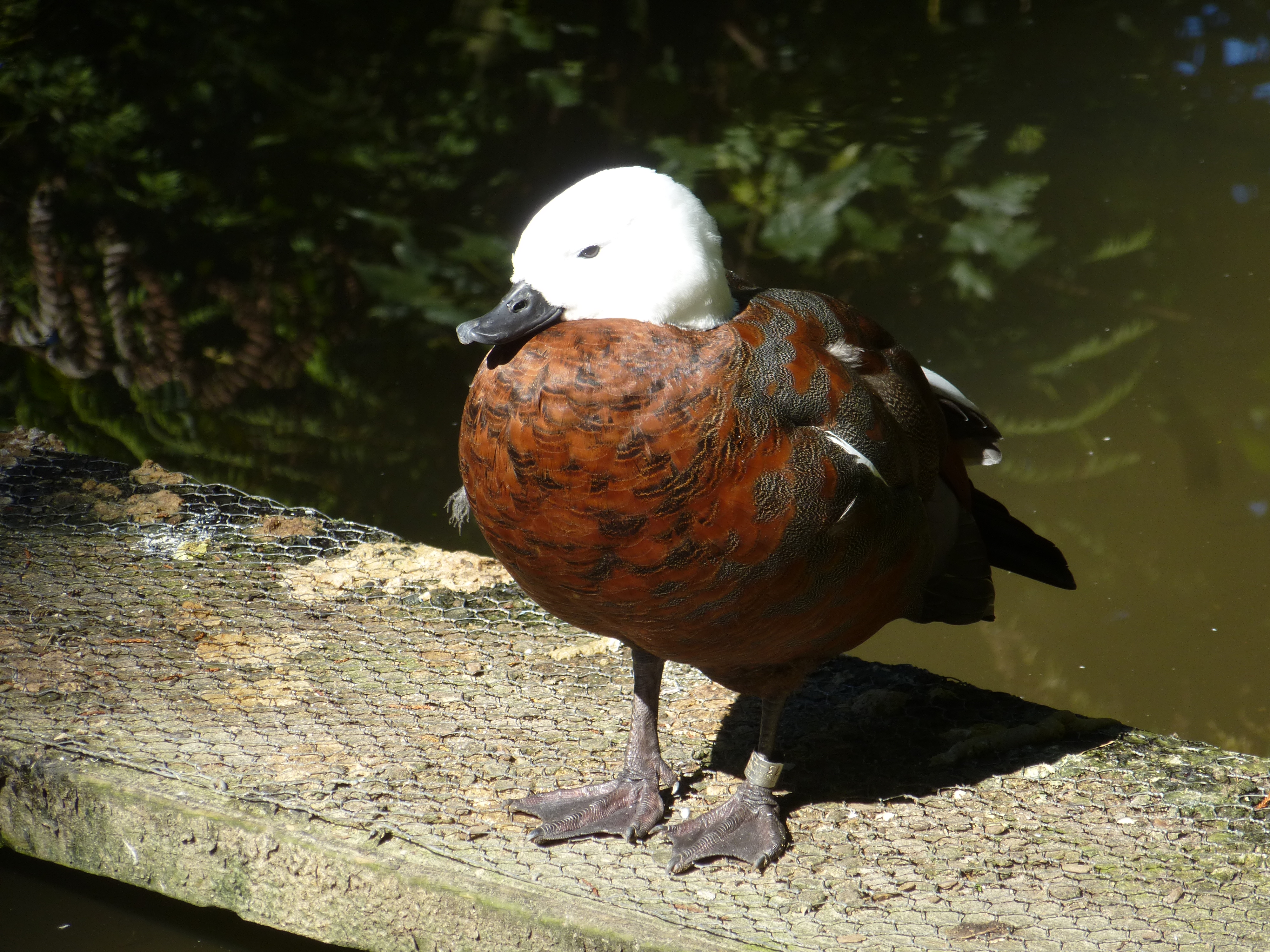 Notice the odd feet of these ducks: 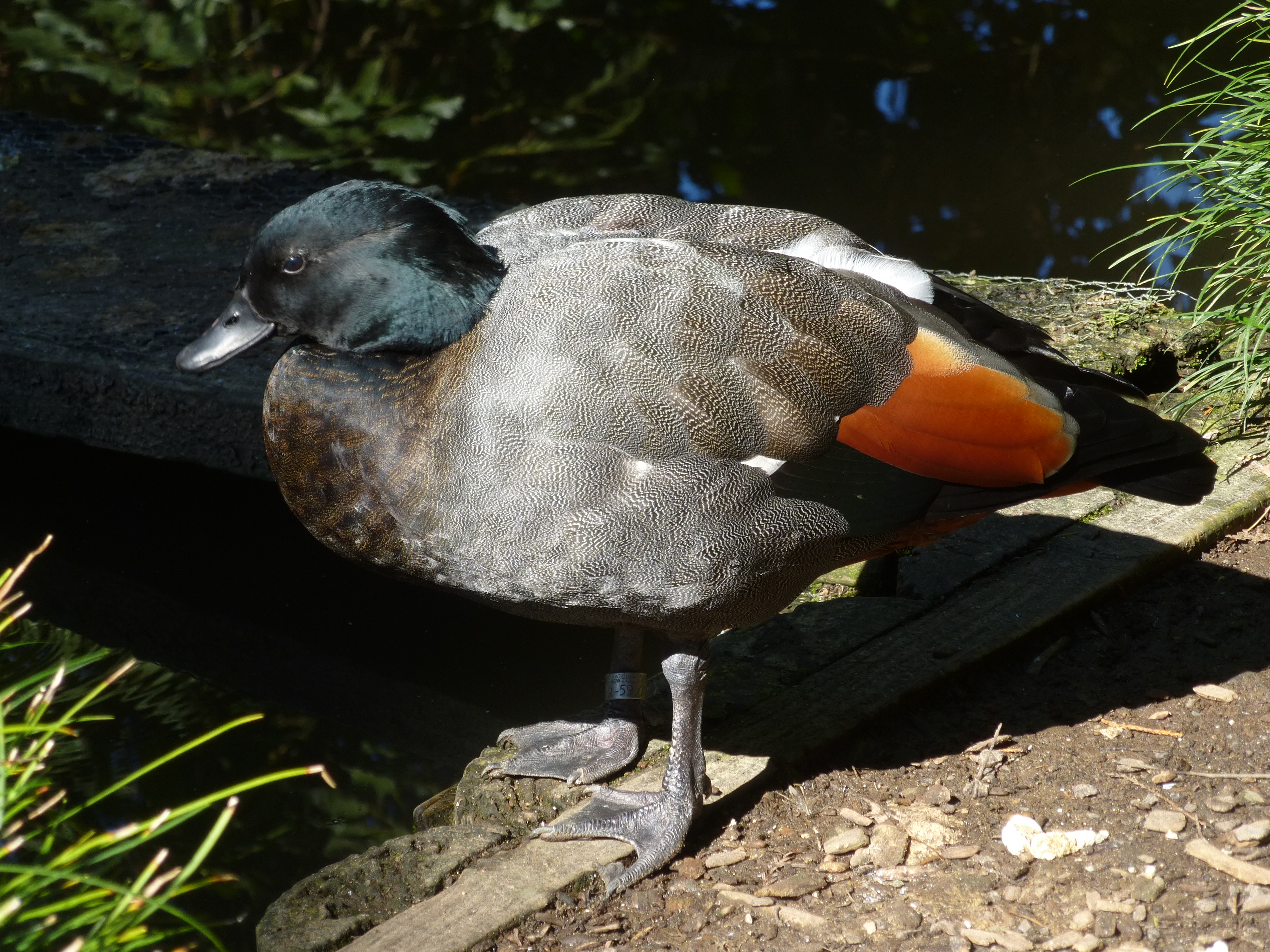 The white-headed bird is the female, and one wonders if there’s mutual or reverse sexual selection going on here (the birds appear to be socially monogamous, but there may be sneaky copulation or different mates in different seasons). The Paradise Shelduck is one bird that’s more common now than before European settlement, for they forage in pastures and have been bred for release on ponds to be hunted (oy!).

Another endemic, the lovely Variable Oystercatcher (Haematopus unicolor); Māori name torea-pango. The English name comes from the polymorphic frontal plumage, which ranges from mottled to all black (as in this one). 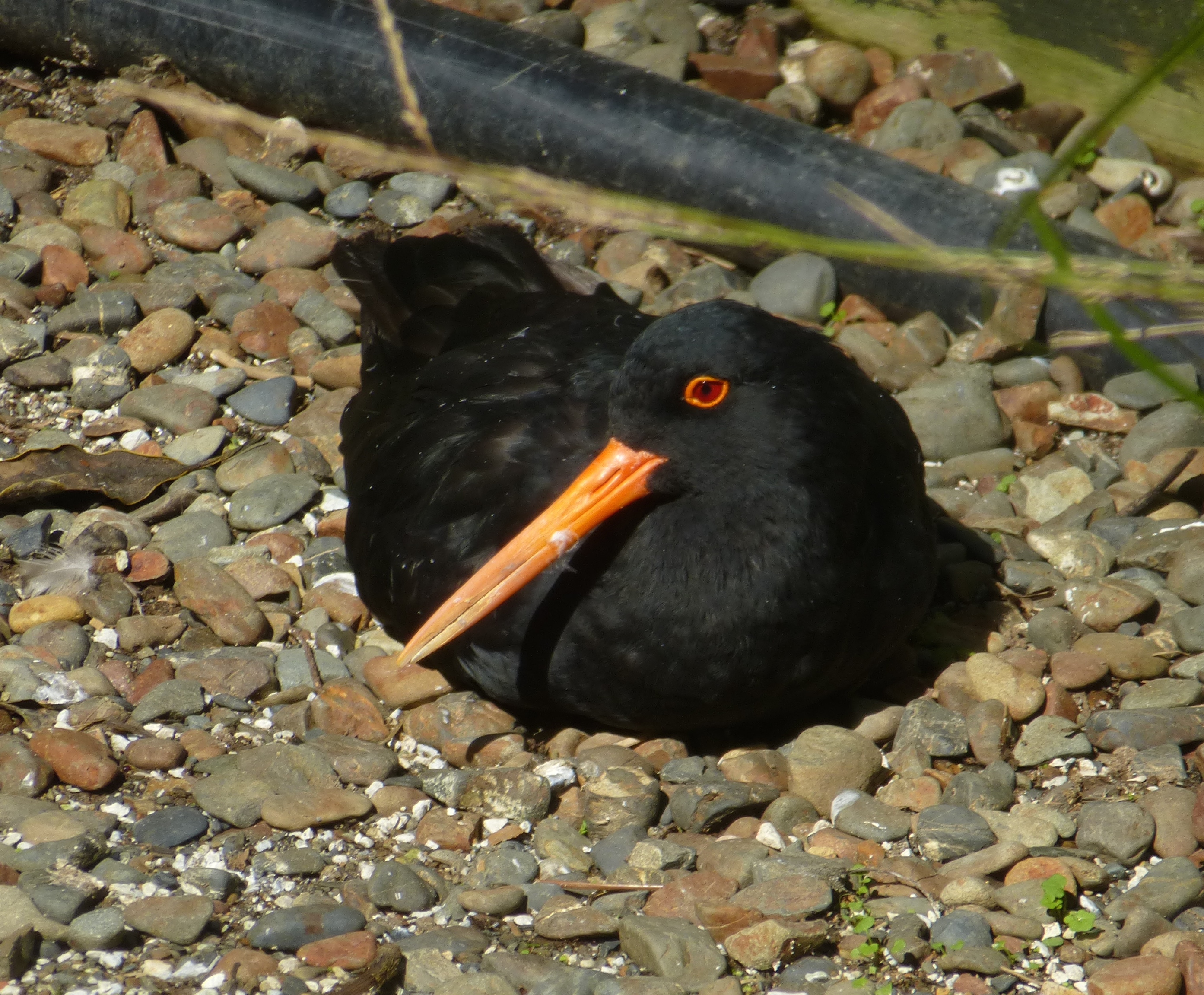 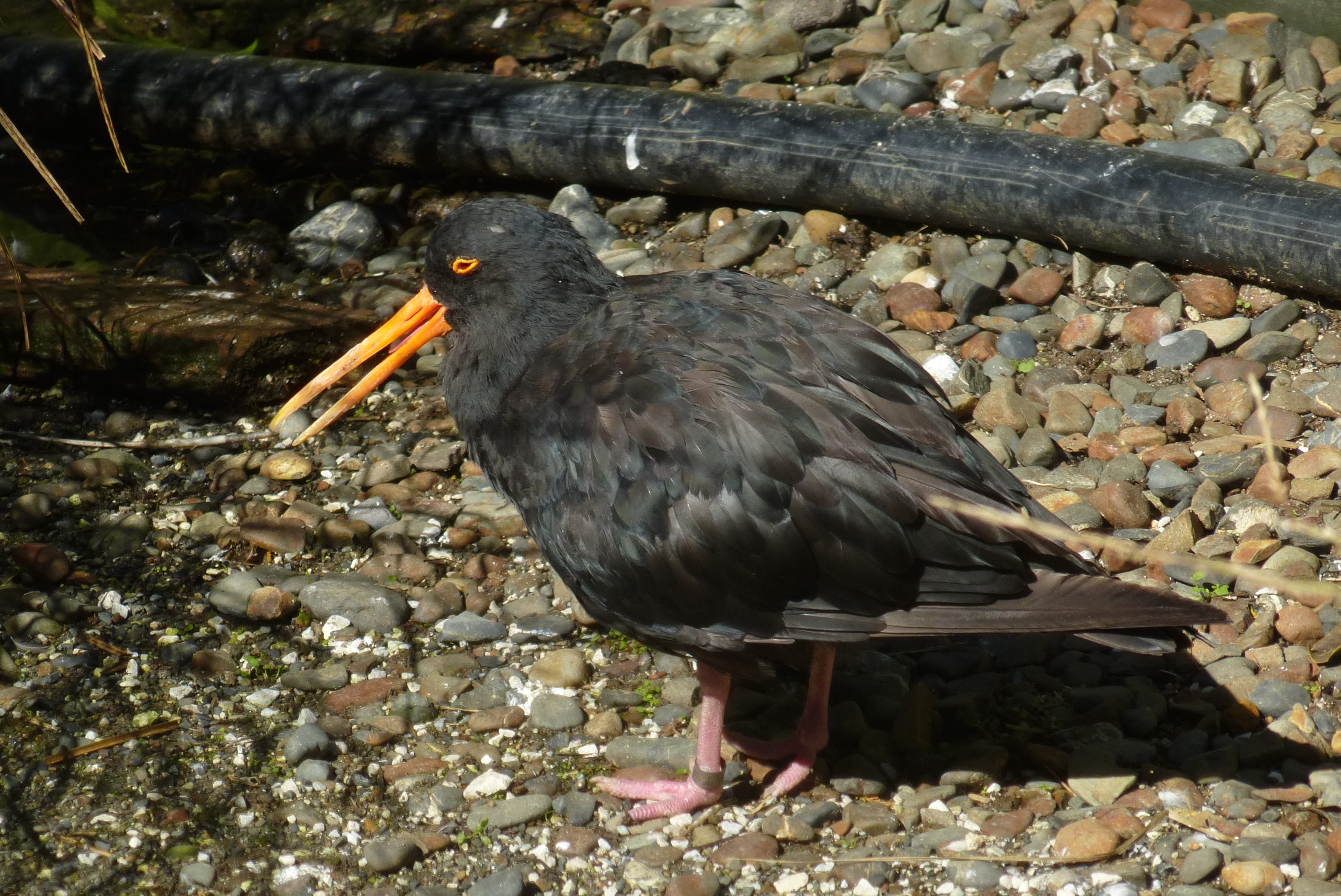 After a quick bite (a meat pie and iced mocha), we repaired to one of New Zealand’s great attractions, the Waitomo Glowworm Caves nearby. Here’s a bit from Wikipedia about how they were found:

The name “Waitomo” comes from the Māori words wai, water and tomo, hole or shaft. The local Māori people had known about the caves for quite some time before the local Māori Chief Tane Tinorau and an English surveyor, Fred Mace, did an extensive exploration in 1887. Their exploration was conducted with candlelight on a raft going into the cave where the stream goes underground (now the cave’s tourist exit.) As they began their journey, they came across the Glowworm Grotto and were amazed by the twinkling glow coming from the ceiling. As they travelled further into the cave by poling themselves towards an embankment, they were also astounded by the limestone formations. These formations surrounded them in all shapes and sizes.

They returned many times after and Chief Tane independently discovered the upper level entrance to the cave, which is now the current entrance. By 1889 Tane Tinorau and his wife Huti had opened the cave to visitors and were leading groups for a small fee. In 1906, after an escalation in vandalism, the administration of the cave was taken over by the government. In 1910 the Waitomo Caves Hotel was built to house the many visitors.

In 1989, the land and cave were returned to the descendants of Chief Tane Tinorau and Huti who comprise many of the employees of the caves today. The descendants receive a percentage of the cave’s revenue and are involved in its management and development.

Here’s the stream that flows into the cave entered by Mace and Chief Tane. Another 20 meters and they’d see the entrance: 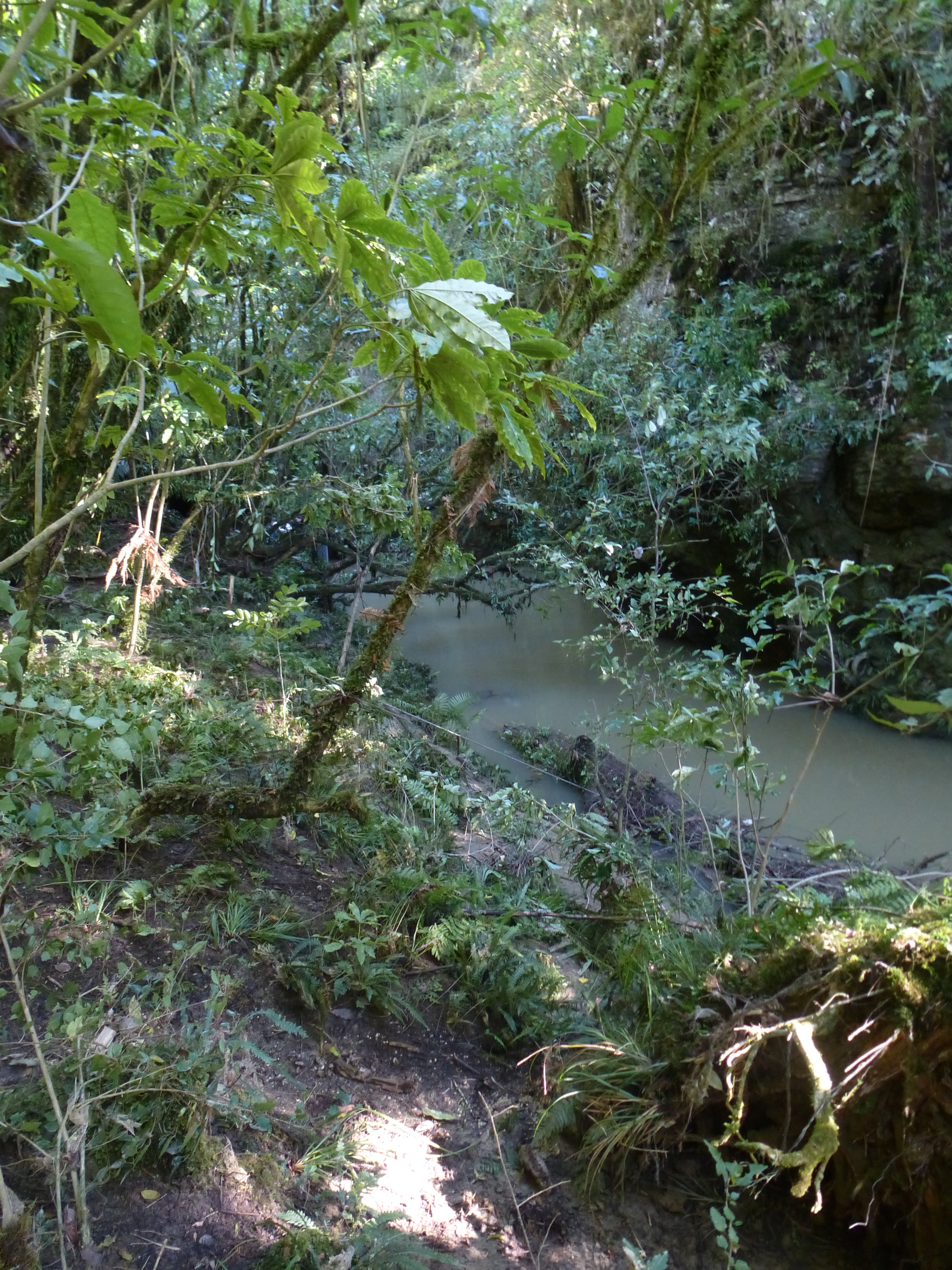 The cave entrance where the discoverers found it; it’s lush outside but of course all vegetation immediately disappears when you enter. This is the exit when you take the tourist boat ride: 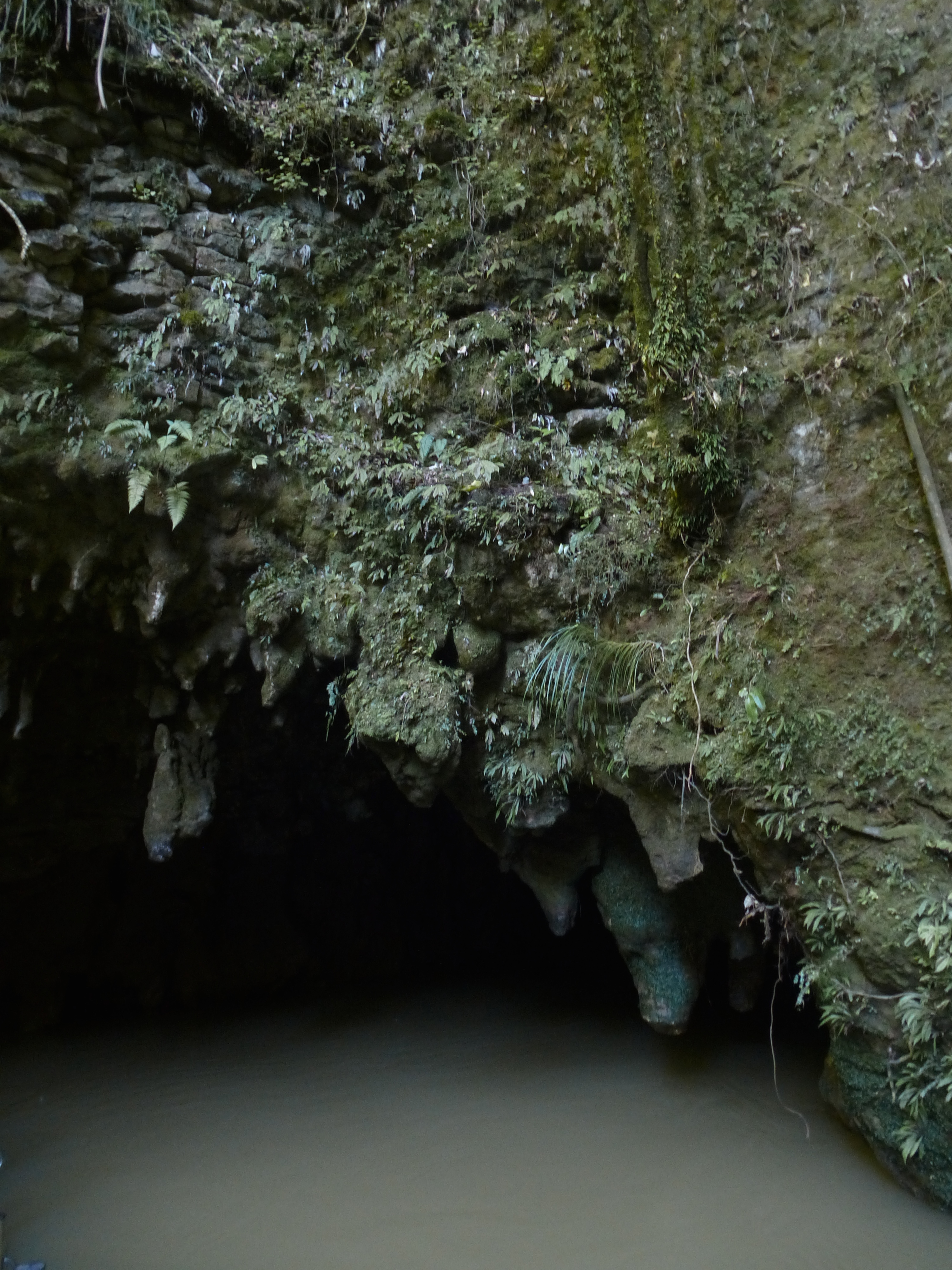 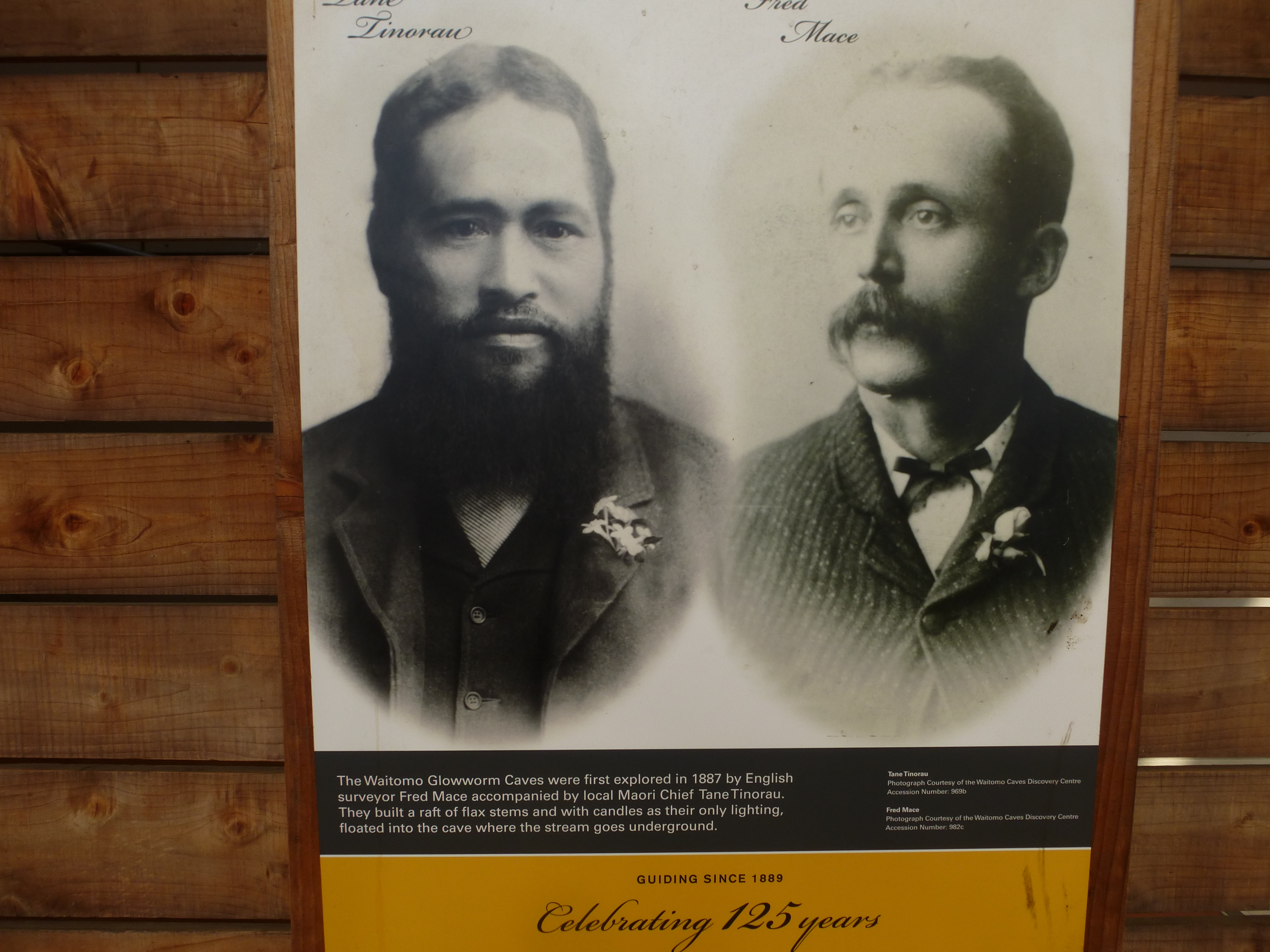 And a photo of how you had to tour the cave in 1920. There are now electric lights in the cave-y part with stalactites and stalagmites (and great acoustics; Dame Kiri Te Kanawa once sang there), but the bit with glowworms is left completely dark. 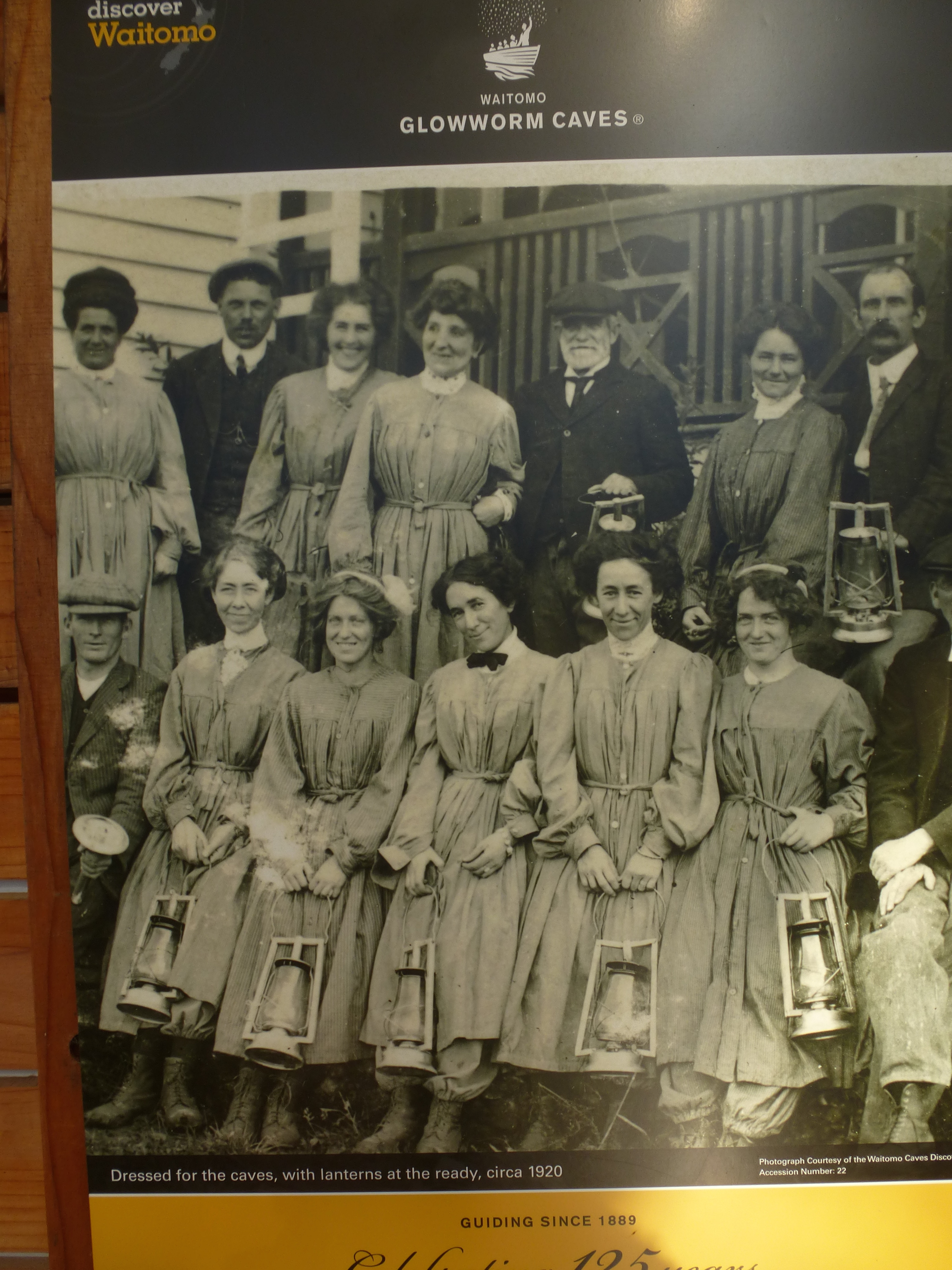 The cave entrance, where our Māori guide told us the rules: including no photos, even without flash. We were told that the no-photo rule was at the request of the “family” (the descendants of the discoverer and his extended family), but I’m not sure that was true. At any rate, I didn’t take any photos and so what I show of the cave interior comes from other photographers. 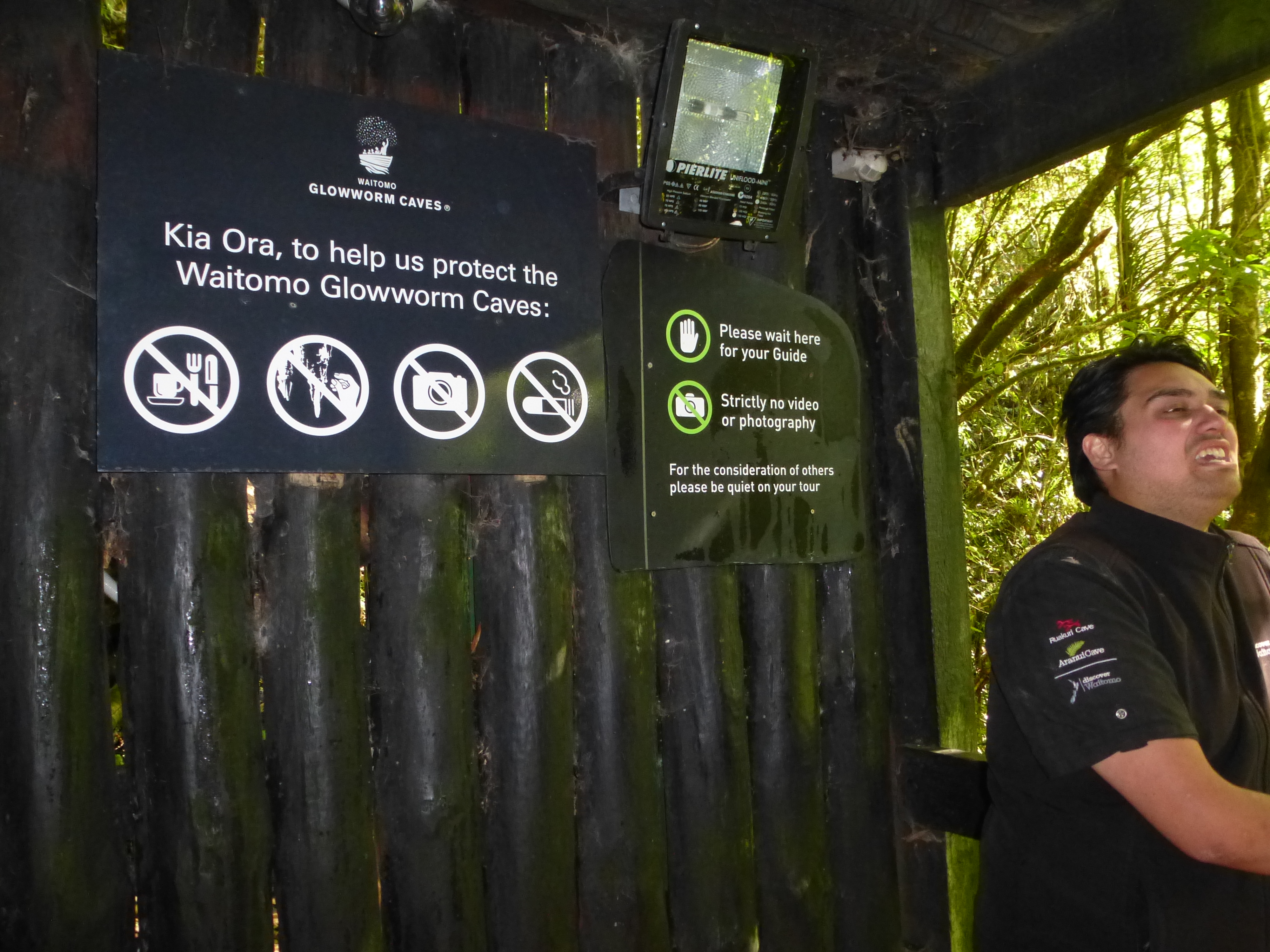 The tour consists of a slow walking tour of the cavern, and then you pile into aluminum boats, each holding about 25 people, for a slow trip down the river through the glowworm caverns. It takes place in complete darkness and silence, with the guide holding onto an overhead line to pull the boat silently upstream. On the cavern’s ceilings are, well, you’ll see in a second. . .

Part of the caverns; this (taken from Wikipedia) is called the “Great Cathedral” and has superb acoustics: our guide sang a Māori song to demonstrate this. He had a lovely voice, and I suspect they choose their guides partly based on the singing voice, as no tourist was willing to sing as a demonstration. 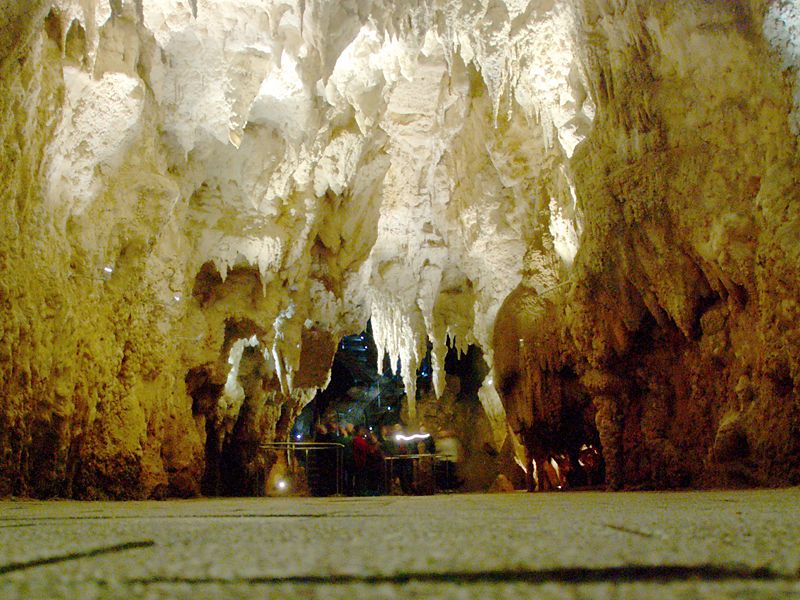 Me at the cave exit, where photos are allowed. I’m wearing a greenstone pendant I bought: 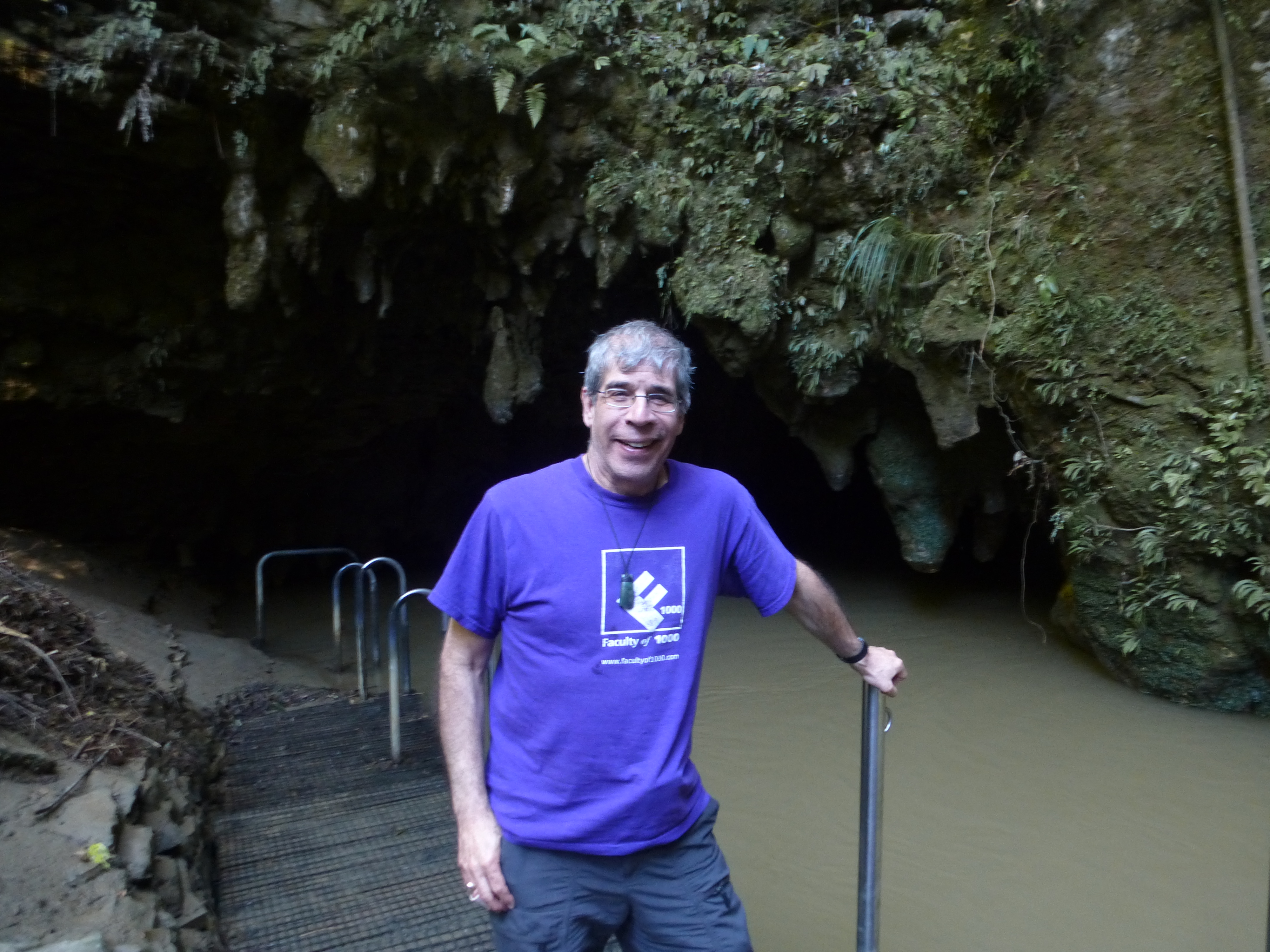 Now, the glowworms. The illumination is made by larvae of the glowworm fly Arachnocampa luminosa (titiwai in Mãori). They spend most of their lives as larvae and only live three days as adults. They have no mouthparts and cannot feed; their mission is simply to breed quickly and then die: 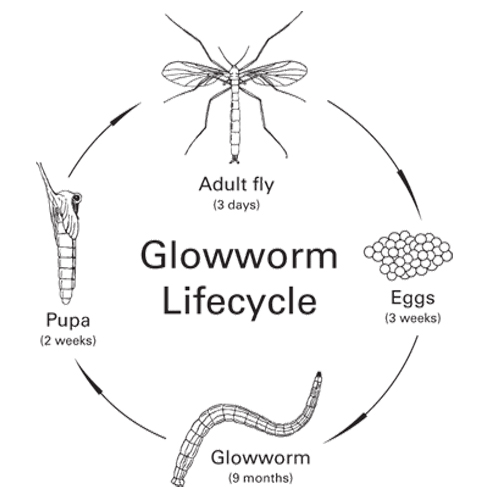 An adult glowworm fly just eclosed from its pupal case (from Spellbound New Zealand). Nearby are the long-lived larvae, each of which produces long silken threads, studded with globs of sticky goo, that hang down into the cave. These nets (more than 50 can be “owned” by a single larva) catch prey. To attract insects, the glowworms have bioluminescent abdomens. 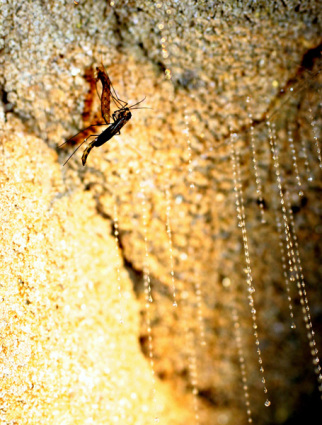 What it looks like inside the cave (not my photos), presumably with the light coming from near the exit, but it may be from a flash: 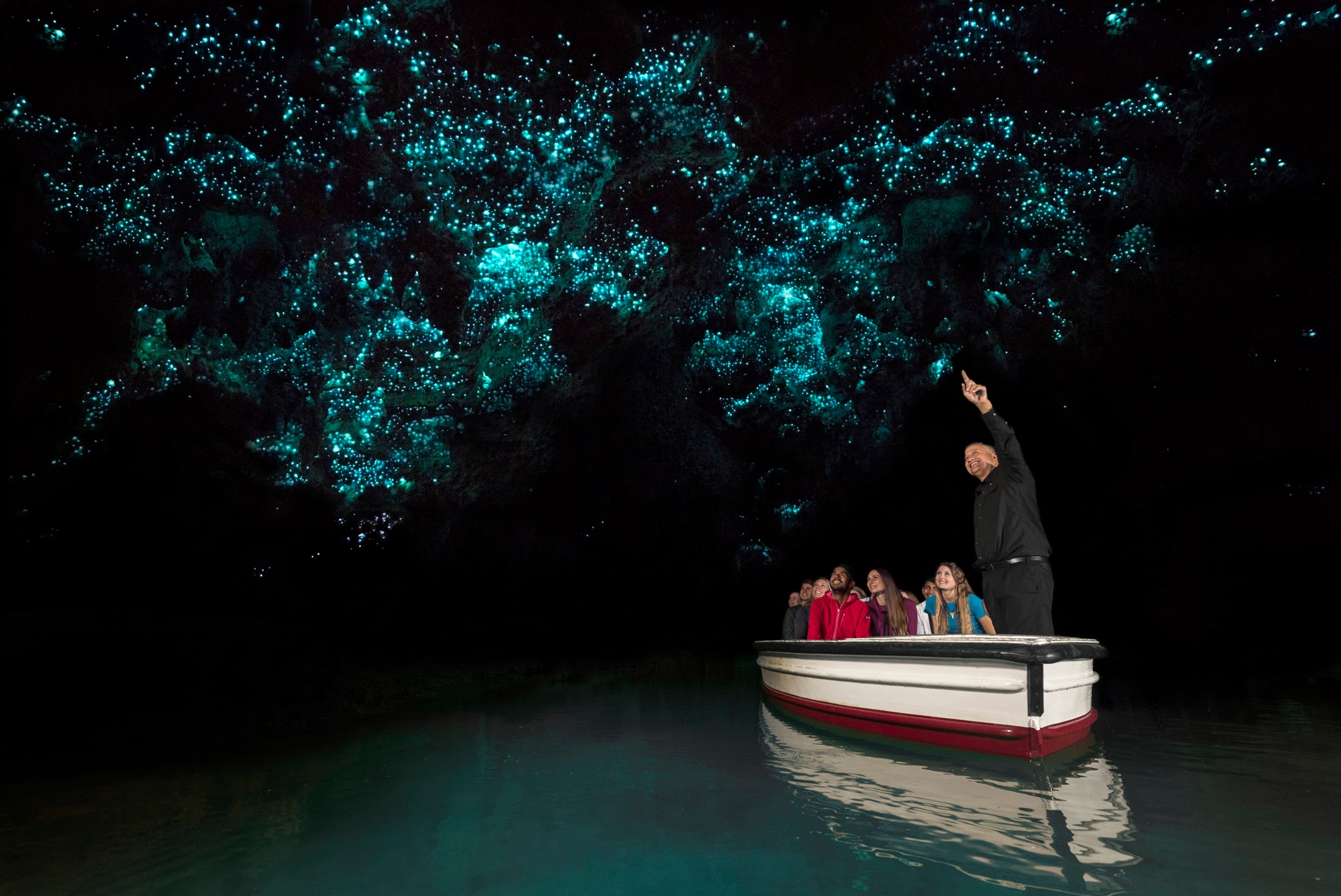 The ceiling by the cave exit, studded with thousands of big, blue-green stars: 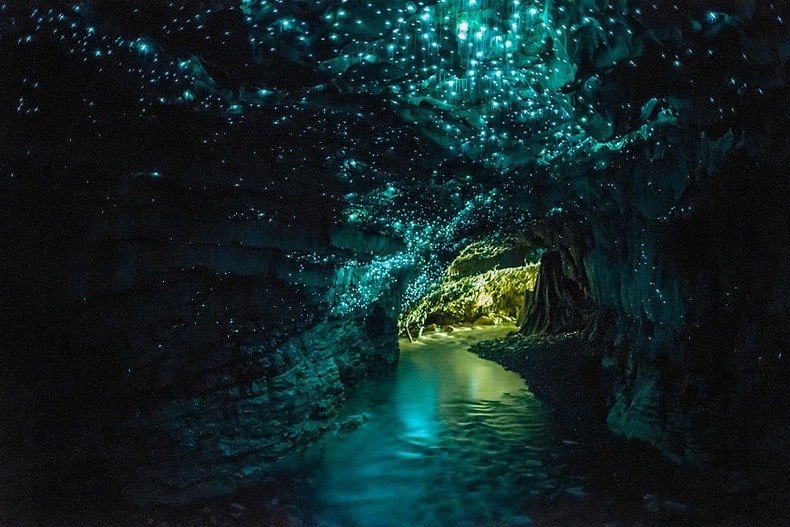 What it looks like when you look up–a biological equivalent of the night sky: 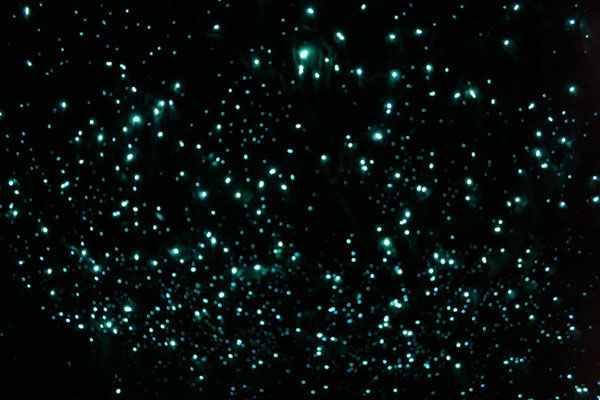 What the above would look like when illuminated from the side (we saw a few of these traps in the main cave): 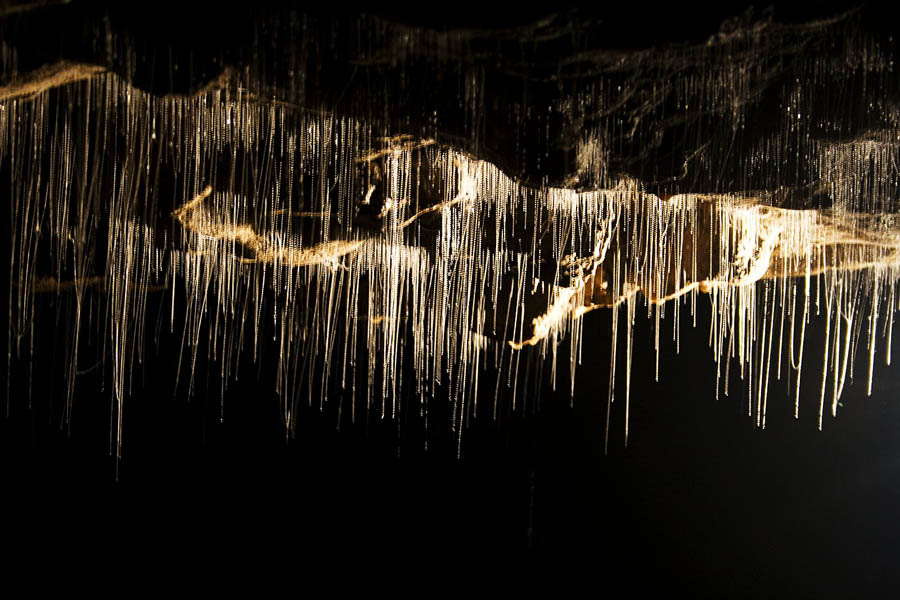 A description from Wikipedia:

The larva spins a nest out of silk on the ceiling of the cave and then hangs down as many as 70 threads of silk (called snares) from around the nest, each up to 30 or 40 cm long and holding droplets of mucus. The larvae can only live in a place out of the wind, to stop their lines being tangled, hence caves, overhangs or deep rainforest. In some species, the droplets of mucus on the silk threads are poisonous, enhancing the trap’s ability to subdue prey quickly.

A larva’s glow attracts prey into its threads. The roof of a cave covered with larva can look remarkably like a blue starry sky at night. A hungry larva glows brighter than one that has just eaten. Prey include midges, mayflies, caddisflies, mosquitos, moths, and even small snails or millipedes. When a prey is caught by a snare, its larva pulls it up (at up to about 2 mm a second) and feeds on the prey. When Arachnocampa prey are scarce, larvae may show cannibalism, eating other larvae, pupae or adult flies.

The glow is the result of a chemical reaction that involves luciferin, the substrate; luciferase, the enzyme that acts upon luciferin; adenosine triphosphate, the energy molecule; and oxygen. It occurs in modified excretory organs known as Malpighian tubules in the abdomen.

Here’s a very informative PBS video of the system, which shows the selective advantage of the lights produced by the larvae. It’s mind-boggling to ponder how this would have evolved in an adaptive, stepwise fashion; I have ideas but won’t bore you with them here.

And a time-lapse video; YouTube’s description:

A Time-lapse of New Zealand’s Glowworm caves as they have never been seen before. Filming this involved sleeping in caves for multiple days in complete darkness with just the sounds of the cave to keep us company (and the occasional eel). Read the full story of how we pulled this off on our blog.

UPDATE: This video won New Zealand Geographic’s 2015 Photographer of the Year award in the Time-lapse category

Many thanks to Heather for taking me to these sites. More photos of the area to come!

31 thoughts on “Around Taumarunui: animals, including glowworms!”