Yesterday (Friday), I went to the Pukaha Mount Bruce Wildlife Centre in the company of Phil Garnock-Jones, an emeritus professor of botany at the University of Wellington.

The Centre is about two hours north of Wellington, and on the way we passed the “Beehive“, the executive wing of the New Zealand Parliament. Built between 1969 and 1979, it’s controversial: most kiwis who told me about it couldn’t decide whether they liked it or hated it: 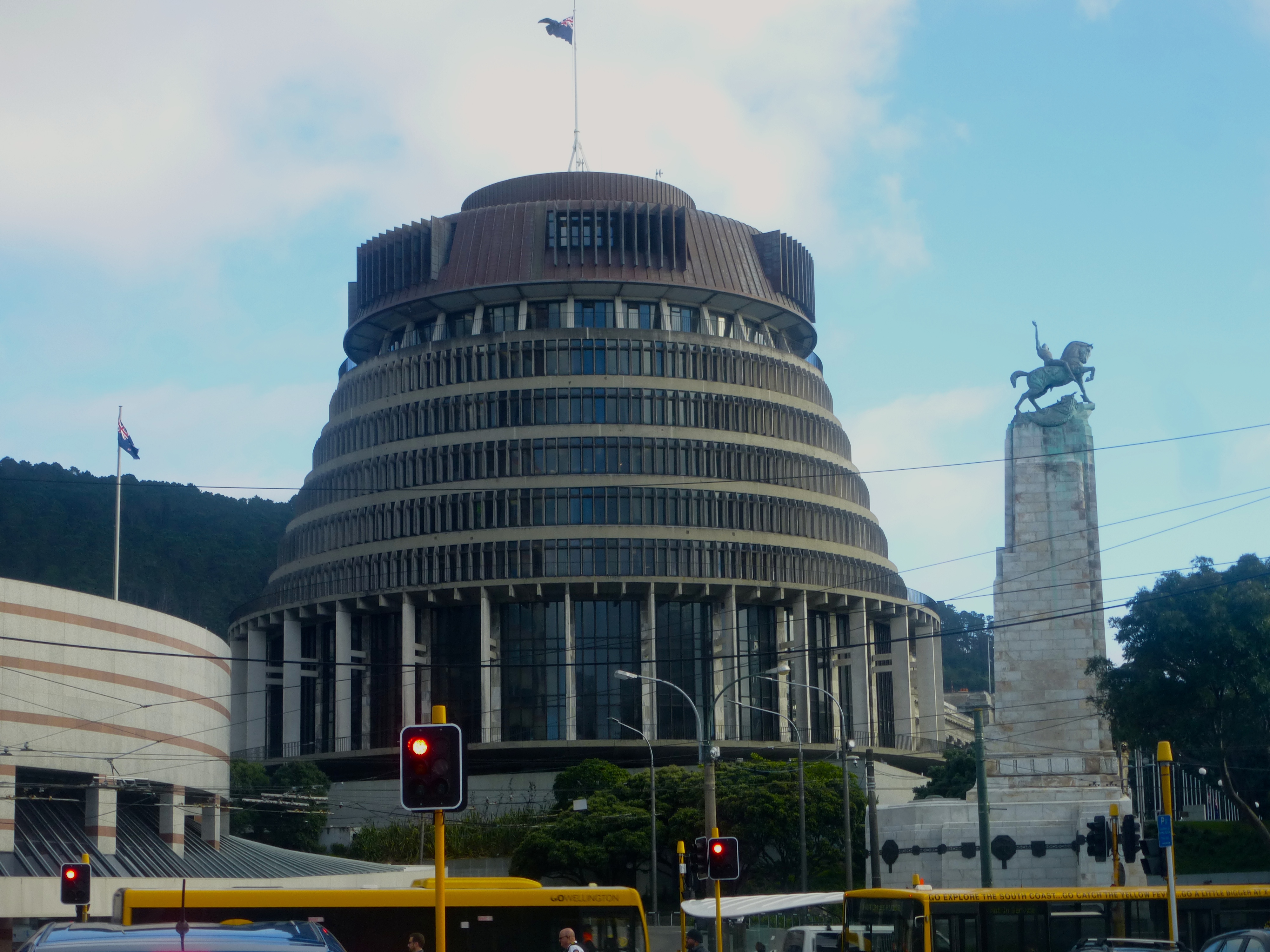 On the way, I saw a “kiwi crossing” sign but it went by too fast to photograph. But it looked a bit like this (landscape was different):

The Centre houses a largish tract of forest and also several wildlife exhibits, including kiwis, tuataras, and many birds.  Below is a kiwi chick: they’ve now hatched 100 from the radio-tagged kiwis who lay eggs on the property. Only about 5% of natural eggs survive because of predation and other factors, but when raised in the Centre, about 85% of the eggs produce kiwis that become adults. They’re raised to the point when they can fend off predators (they kick hard!), and are then released back into the forest.

Kiwis, of which there are five species (or three or four, depending on whom you ask), are all critically endangered as they breed slowly and are vulnerable to introduced predators. They are, of course, the national symbol of New Zealand, whose inhabitants are called “Kiwis.” 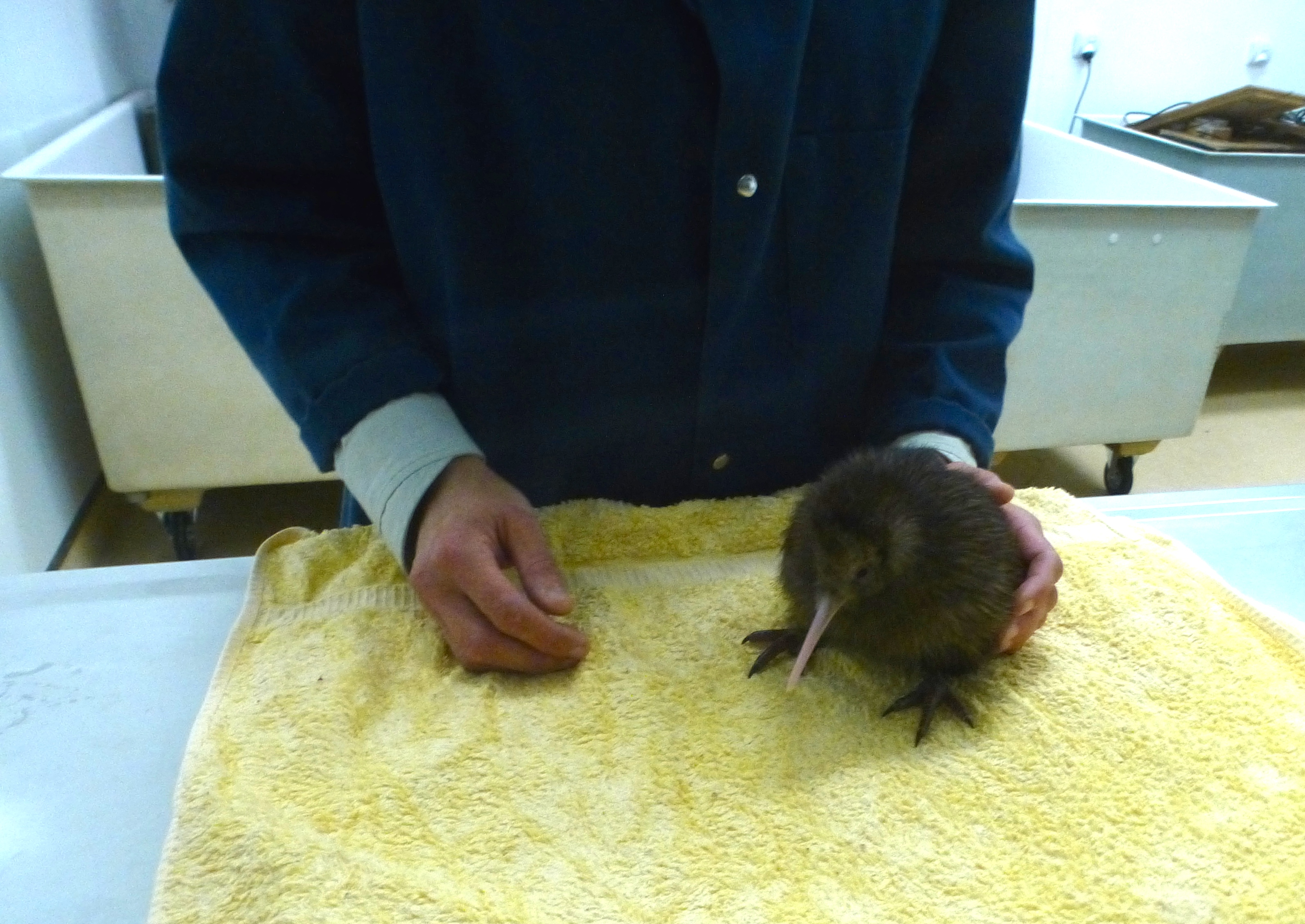 They had a white leucistic one, too, and several brown ones, but they are nocturnal and the exhibit is dark. You can’t and shouldn’t use flash, so my picture was horrible. But here’s a white kiwi chick hatched at the Centre, photographed by them. (As we’ve learned, leucism is not the same gene as albinism, and changes body pigmentation but not eye pigmentation.)

Kiwis lay the largest egg in relation to their body size of any bird: here’s how it looks via a reconstruction. Every organ must be squashed up inside! The presenter at the Kiwi House told us this is the equivalent of a woman giving birth to a six-year-old child! 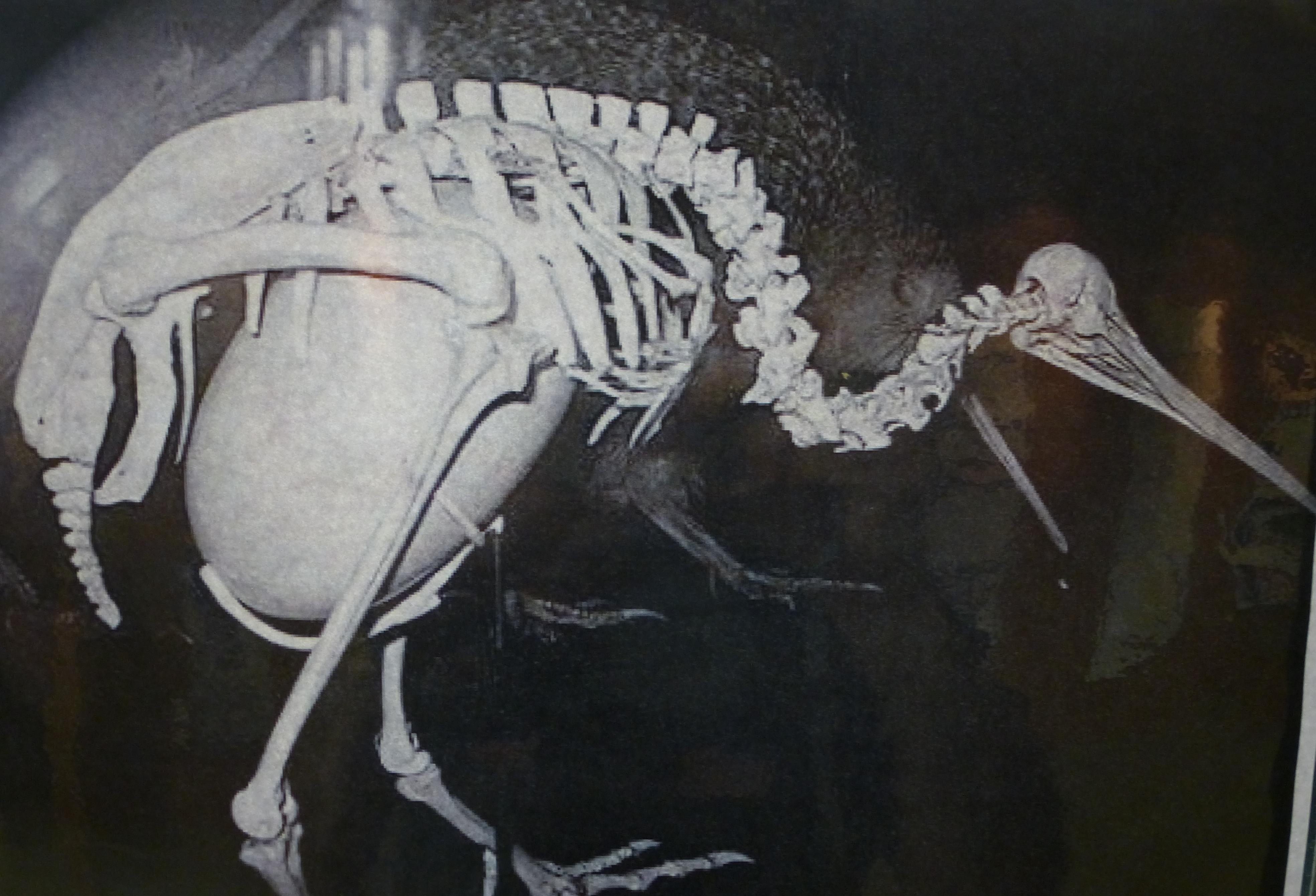 More about kiwi reproduction from Wikipedia:

Once bonded, a male and female kiwi tend to live their entire lives as a monogamous couple. During the mating season, June to March, the pair call to each other at night, and meet in the nesting burrow every three days. These relationships may last for up to 20 years. They are unusual among other birds in that, along with some raptors, they have a functioning pair of ovaries. (In most birds and in platypuses, the right ovary never matures, so that only the left is functional.) Kiwi eggs can weigh up to one-quarter the weight of the female. Usually, only one egg is laid per season. The kiwi lays the biggest egg in proportion to its size of any bird in the world, so even though the kiwi is about the size of a domestic chicken, it is able to lay eggs that are about six times the size of a chicken’s egg. The eggs are smooth in texture, and are ivory or greenish white. The male incubates the egg, except for the Great Spotted Kiwi, A. haastii, in which both parents are involved. The incubation period is 63–92 days. Producing the huge egg places significant physiological stress on the female; for the thirty days it takes to grow the fully developed egg, the female must eat three times her normal amount of food. Two to three days before the egg is laid there is little space left inside the female for her stomach and she is forced to fast.

The kākā, (Nestor meridionalis) is the sister species to the kea, a bird I’ve already described. They’re more common than kea, and tend to hang around human habitats to beg or steal food. While eating lunch at the Centre’s cafe, Phil and I encountered one that flew down to the patio where we were sitting. They’re gorgeous birds, and just as fearless as the keas: 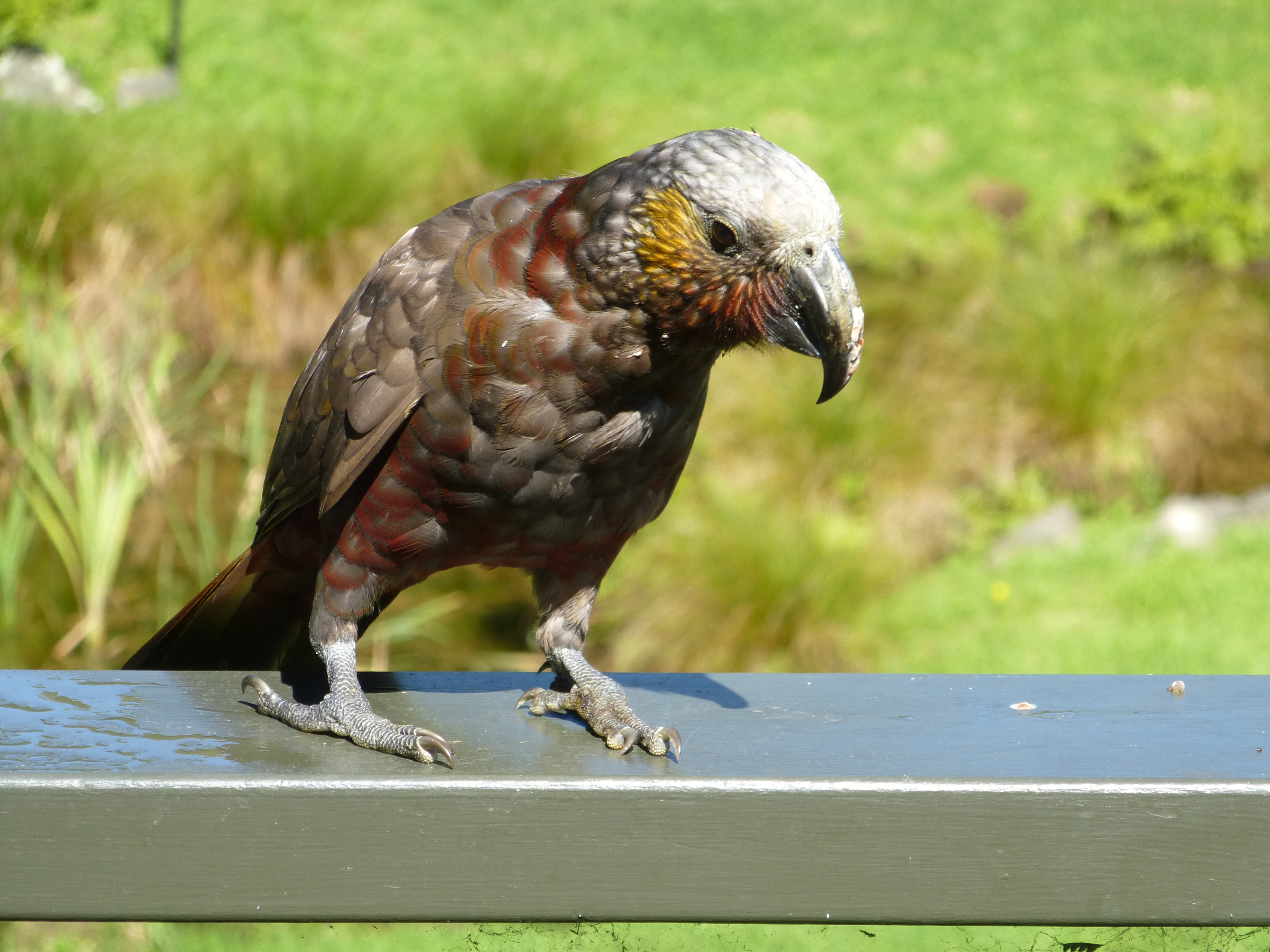 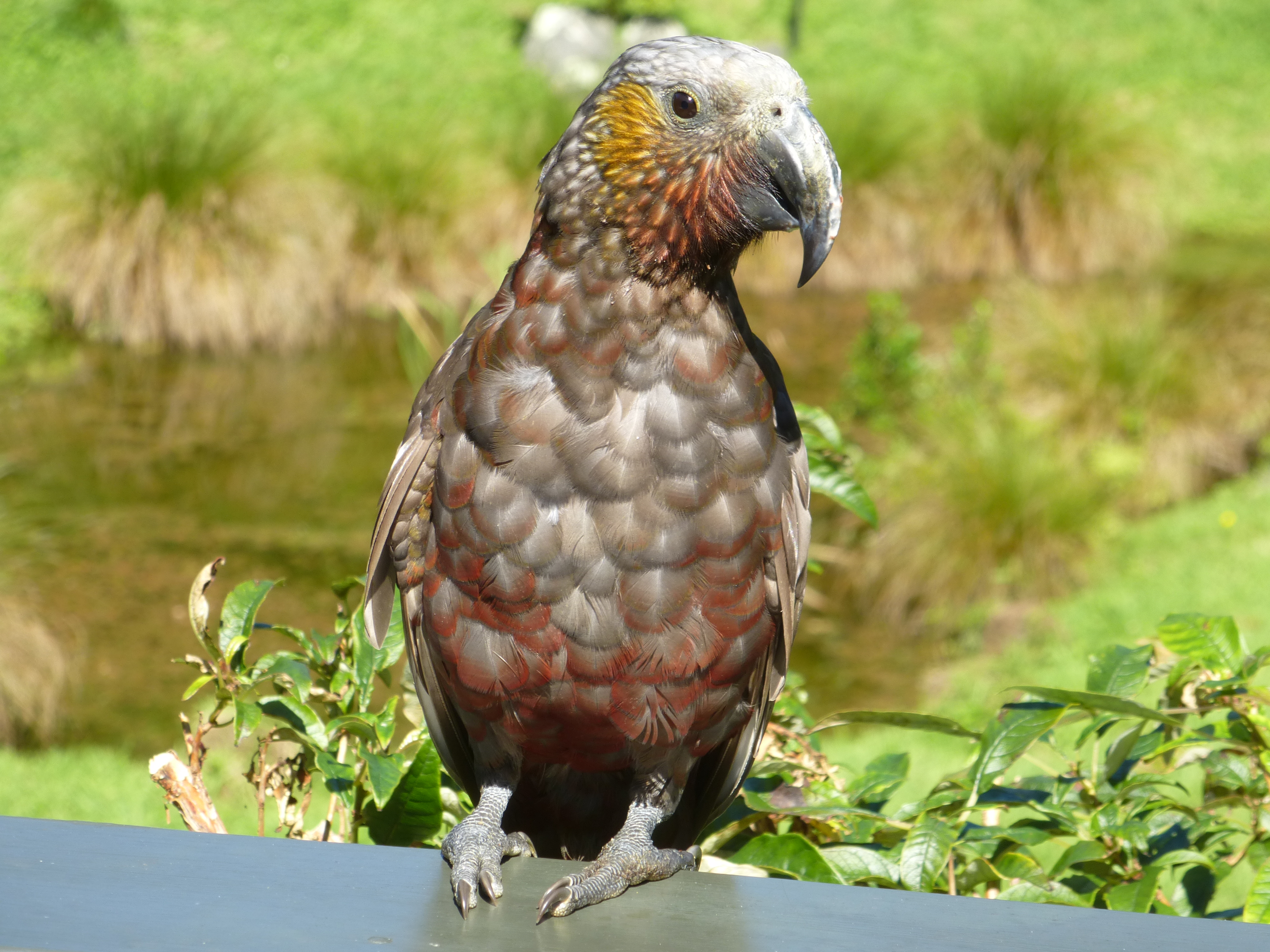 I didn’t feed them, as you’re not supposed to, but this one hopped from table to table looking for handouts. Each table also has a spray bottle of water that you can use to spray them if you want them off your table. Several people did that, but I thought it was horrible. Why would you spray one of these wonderful birds? Yes, keep your food away from them, but don’t spritz them.

This one went for the dregs of an iced mocha left at a table, using its tongue to lick the inside of the glass. 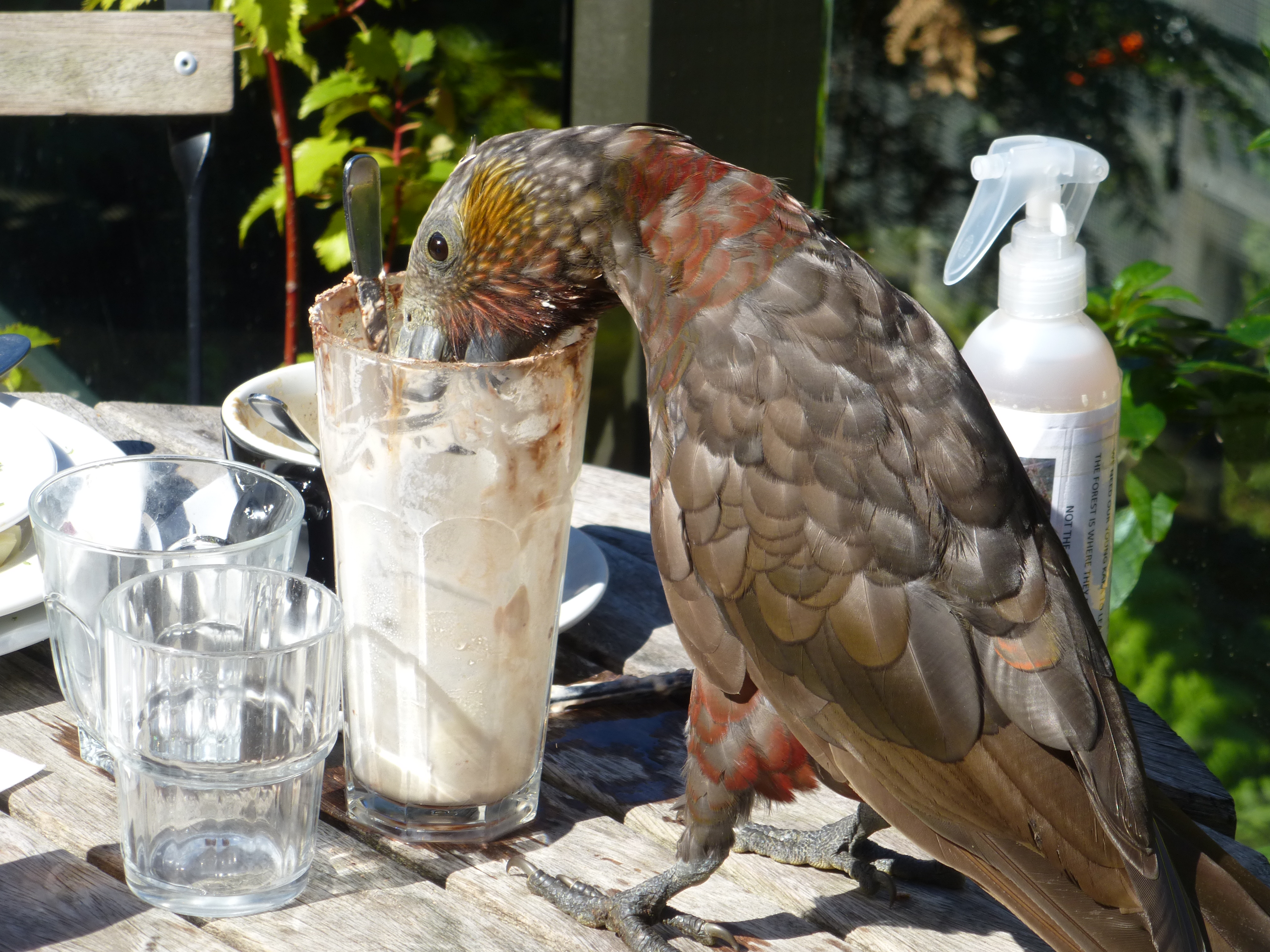 Brazen—right in front of a “Please do not feed the kakas” sign! 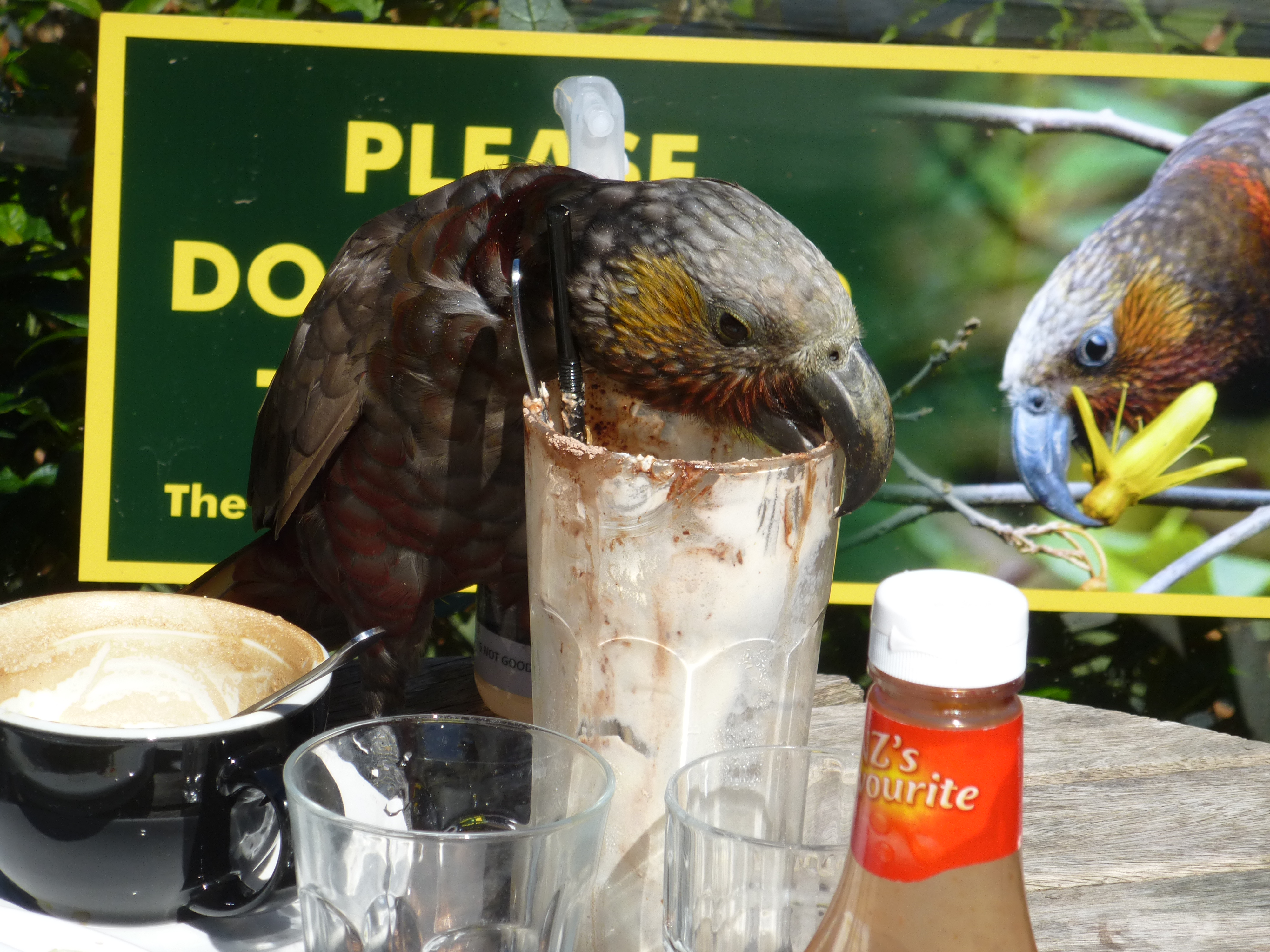 These people photographed the kākā but the sprayed it. Ingrates! 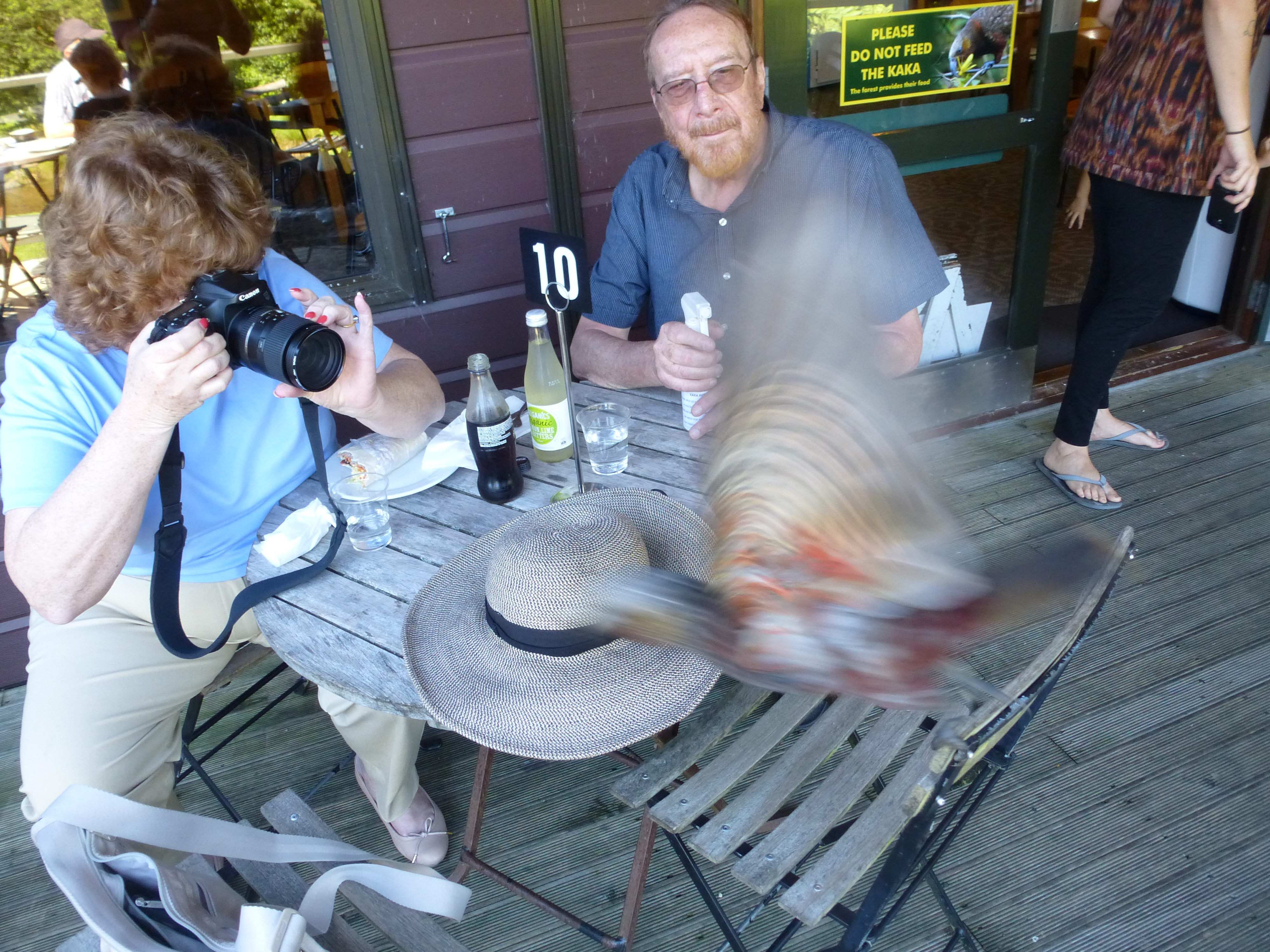 This guy had a tussle with the kākā over his plastic-enclosed sandwich. I would have loved to see the bird open it up. 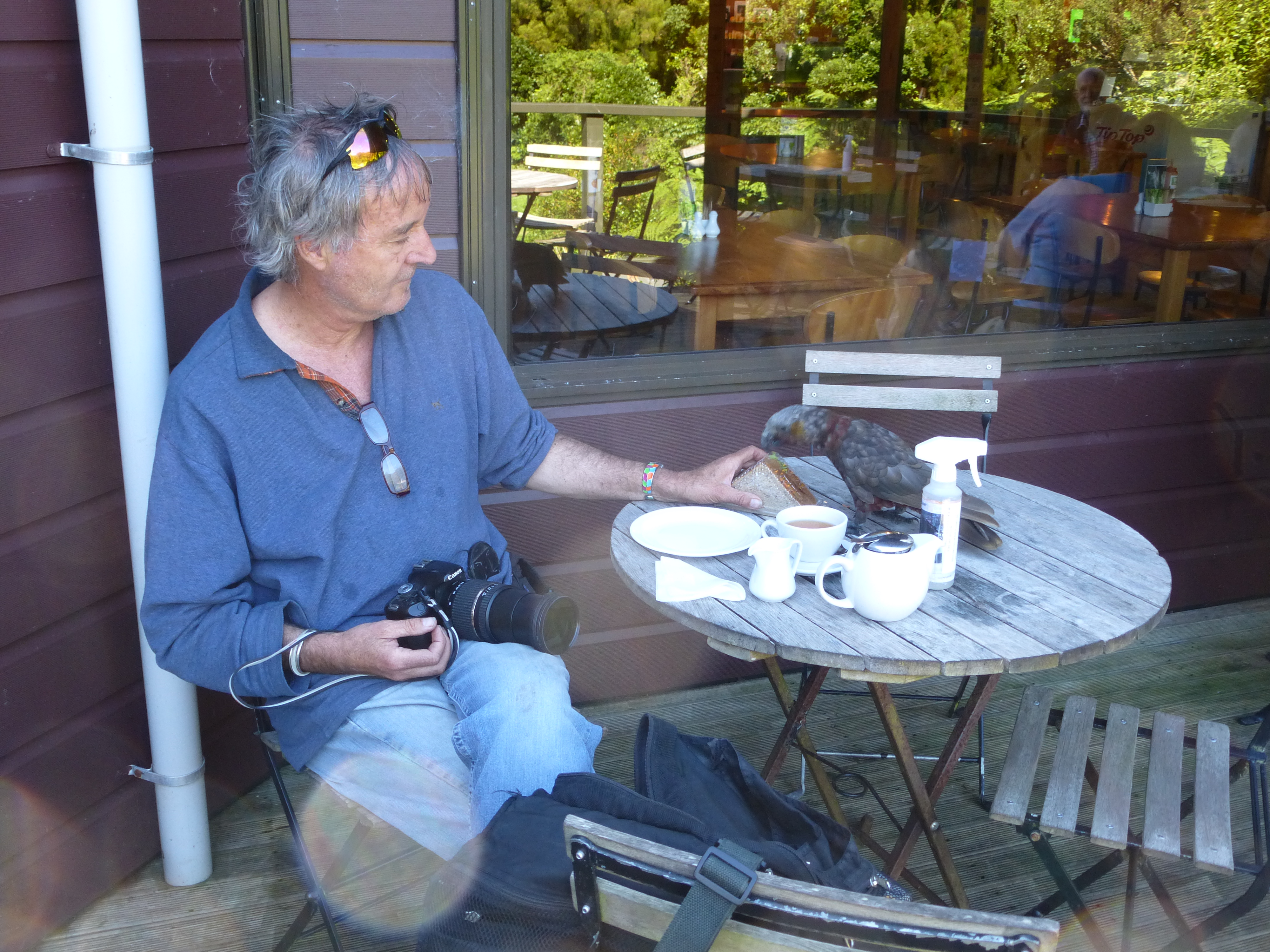 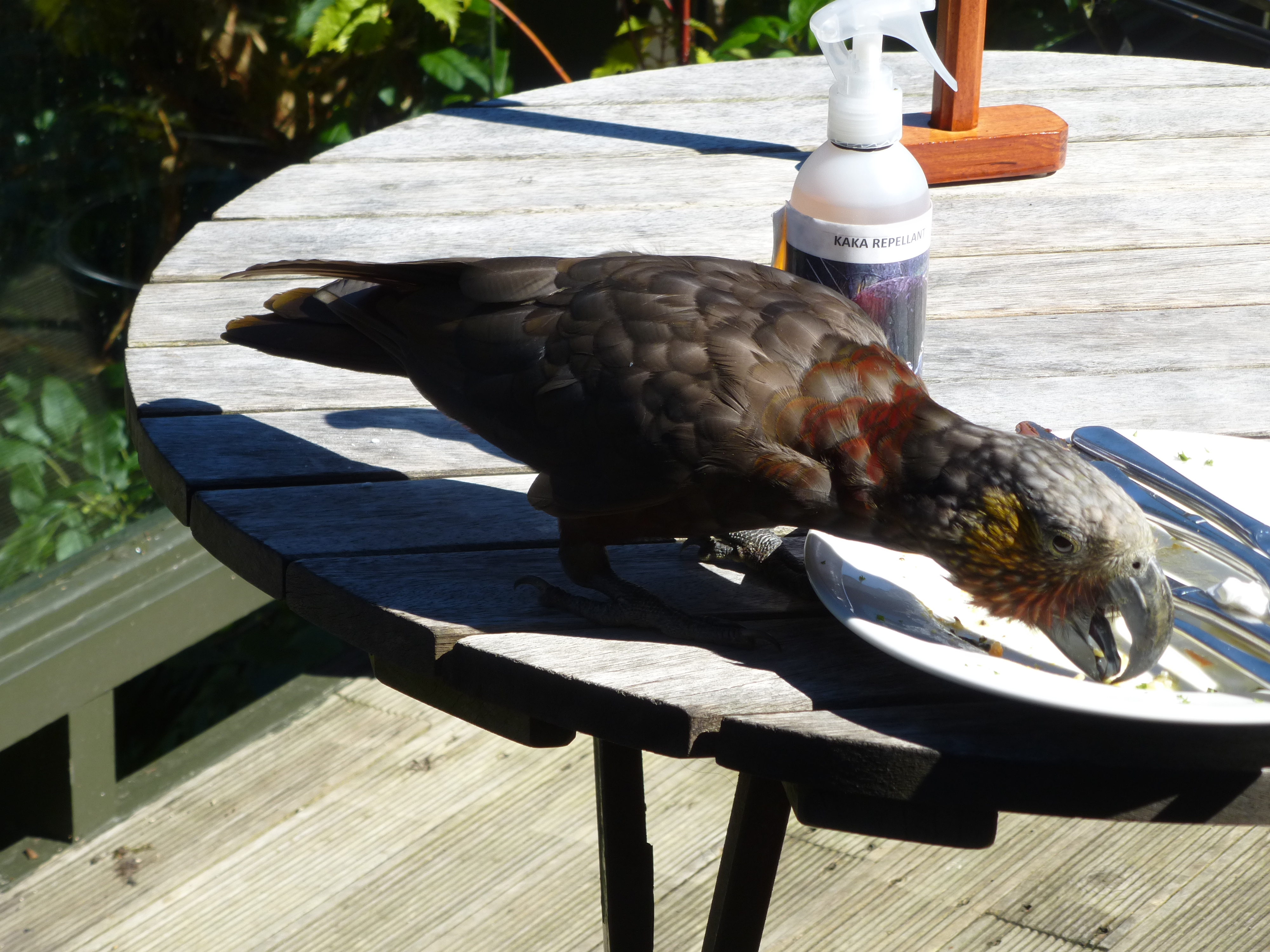 Phil, like a good biologist, just sat there and photographed the bird as it sat on our table: 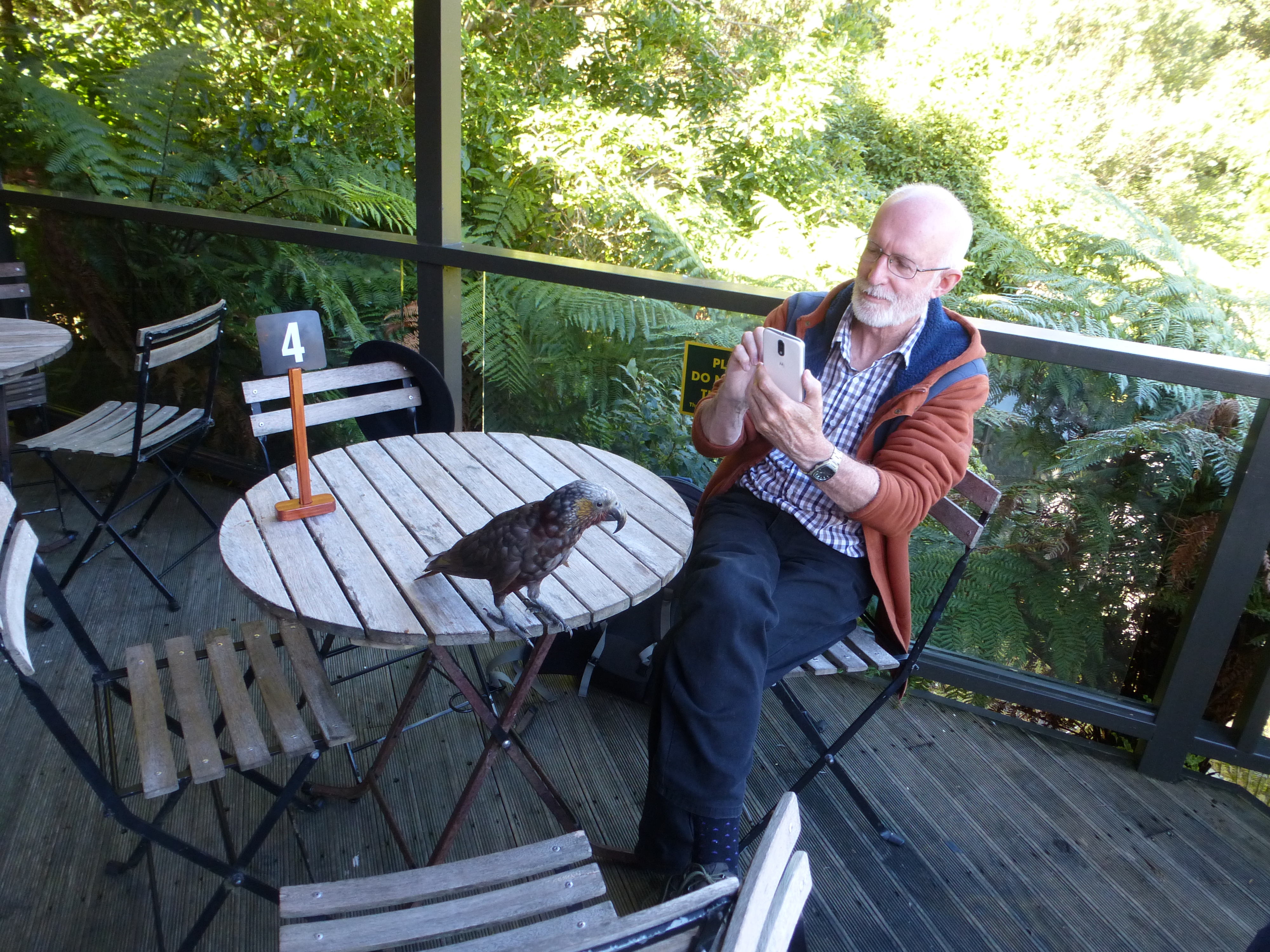 Here’s an Antipodes Island parakeet (Cyanoramphus unicolor), endemic to the Antipodes Islands off New Zealand. According to Wikipedia, it’s one of only five species of ground-dwelling parrots in the world: 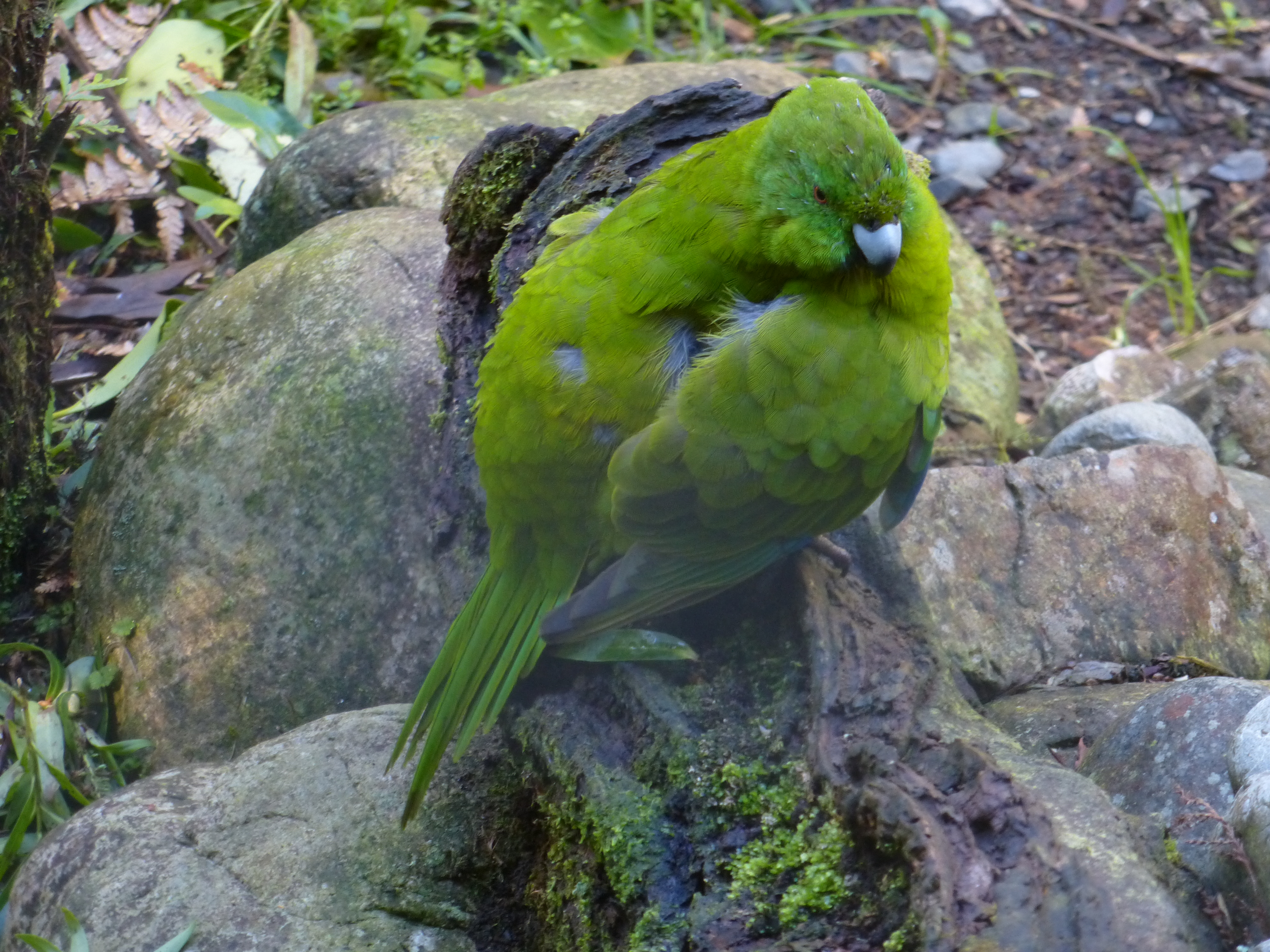 Phil with a kõkako (Callaeas wilsoni), a very rare bird found on the North Island. It is large and has a beautiful gray color with blue wattles on either side of the beak. It’s endangered because of the usual factor: habitat loss. 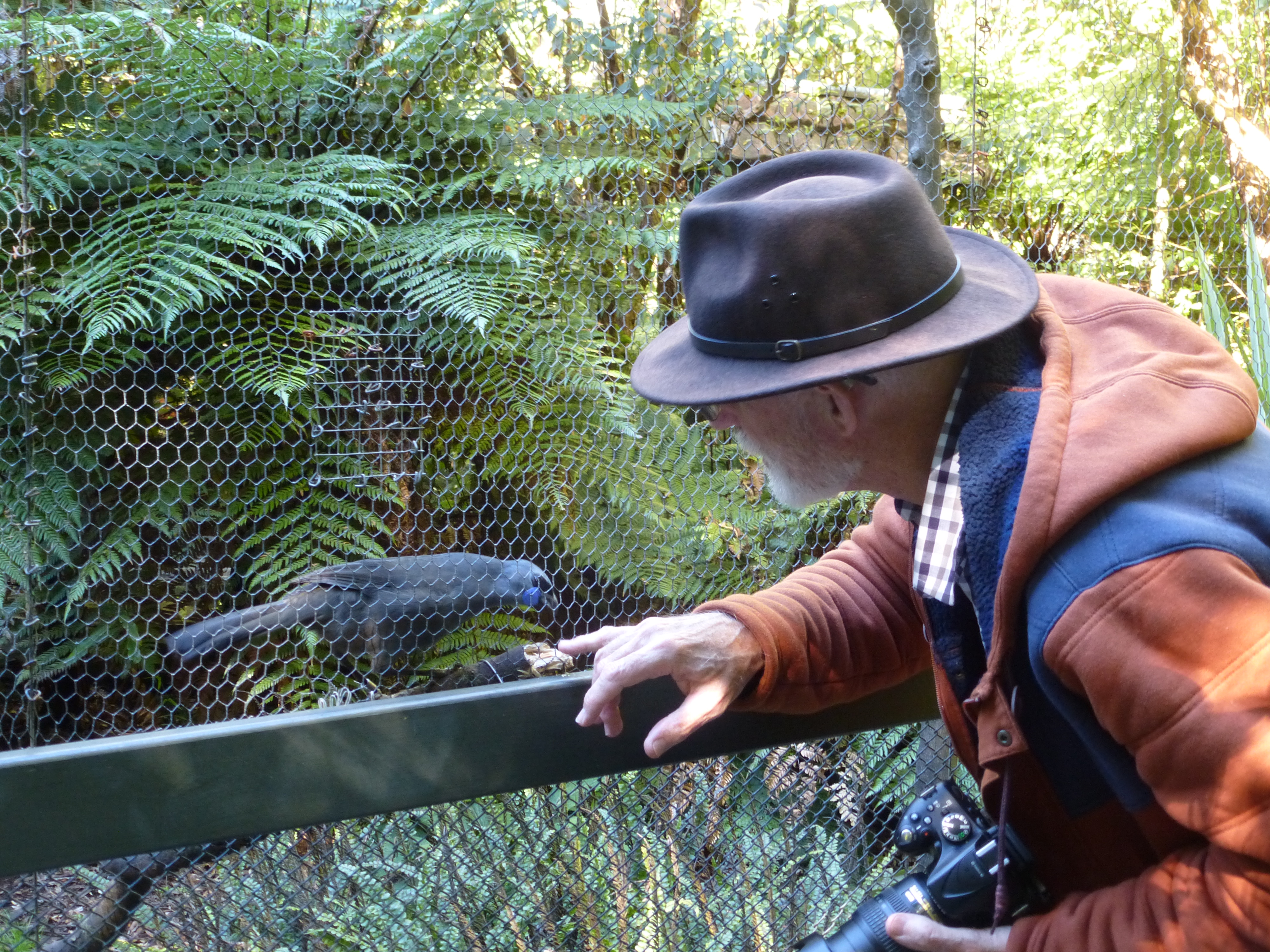 A picture of the kõkako taken by Phil through the wire (he had a fancy Nikon digital SLR). Look at those blue wattles! 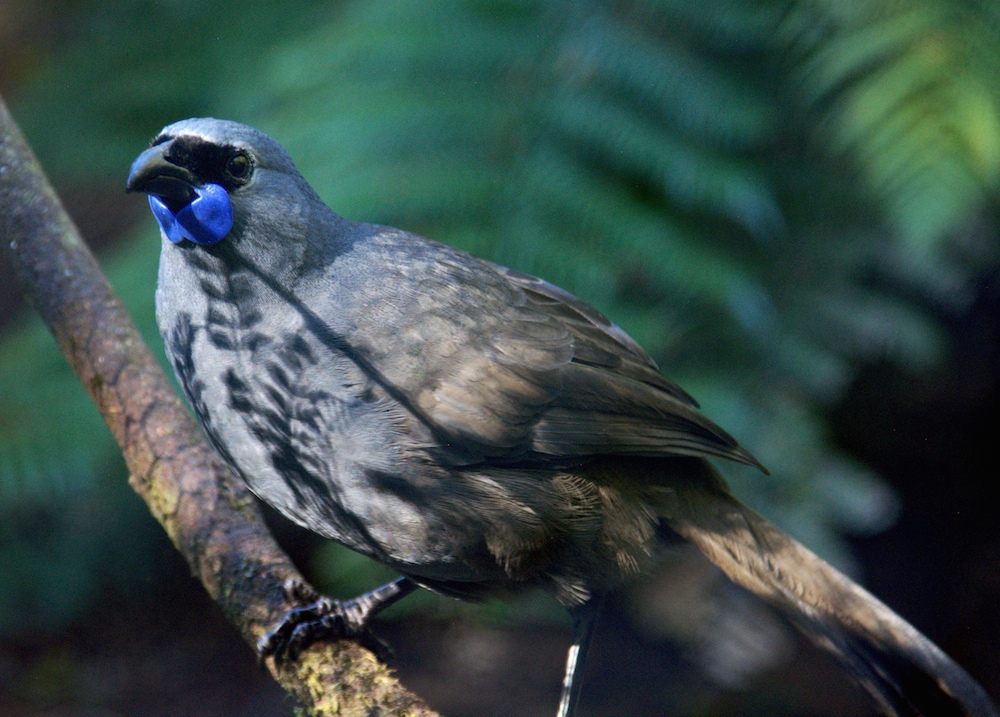 Here’s me with the bird; it liked me took from my hand leftover berries from the keeper’s feeding demonstration. We bonded. This was a hand-reared bird that was caught as a nest runt in the wild; it couldn’t call like a regular kõkako, but could wolf whistle like a human, clearly due to either visitors or a nefarious owner! 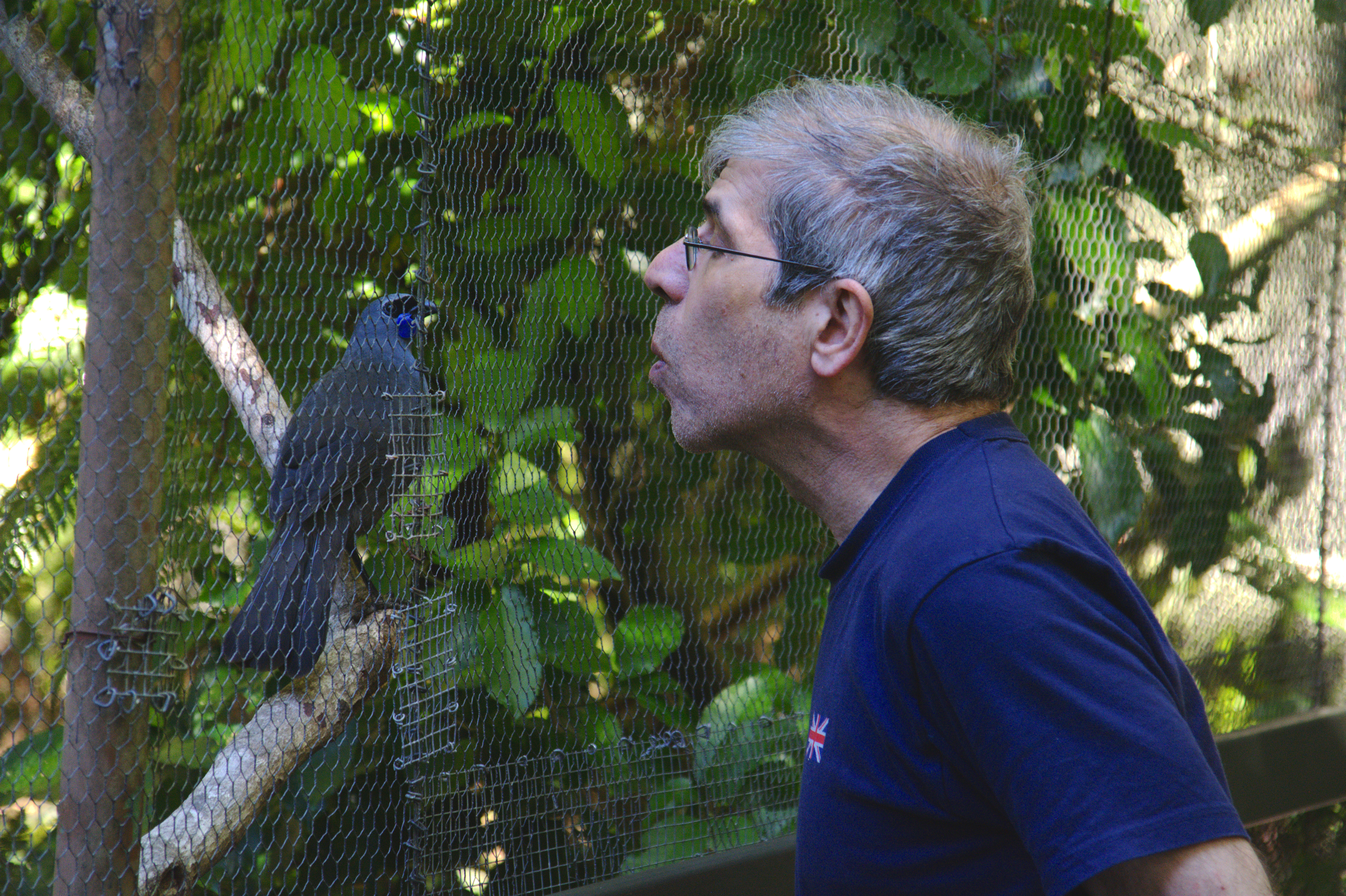 Here’s a tuatara (Sphenodon punctatus), a famous and iconic reptile. Found only in New Zealand, it’s the sole surviving species in the order Rhynchocephalia, which flourished during the Age of Dinosaurs: about 200 million years ago. It’s a “living fossil”, and its sister group is (lizards + snakes).

They appear to begin breeding at about 25 years of age (!) and are said to live up to 100 years in captivity, though that’s not certain. I’m sure Greg will post some more about this either here or in the comments. 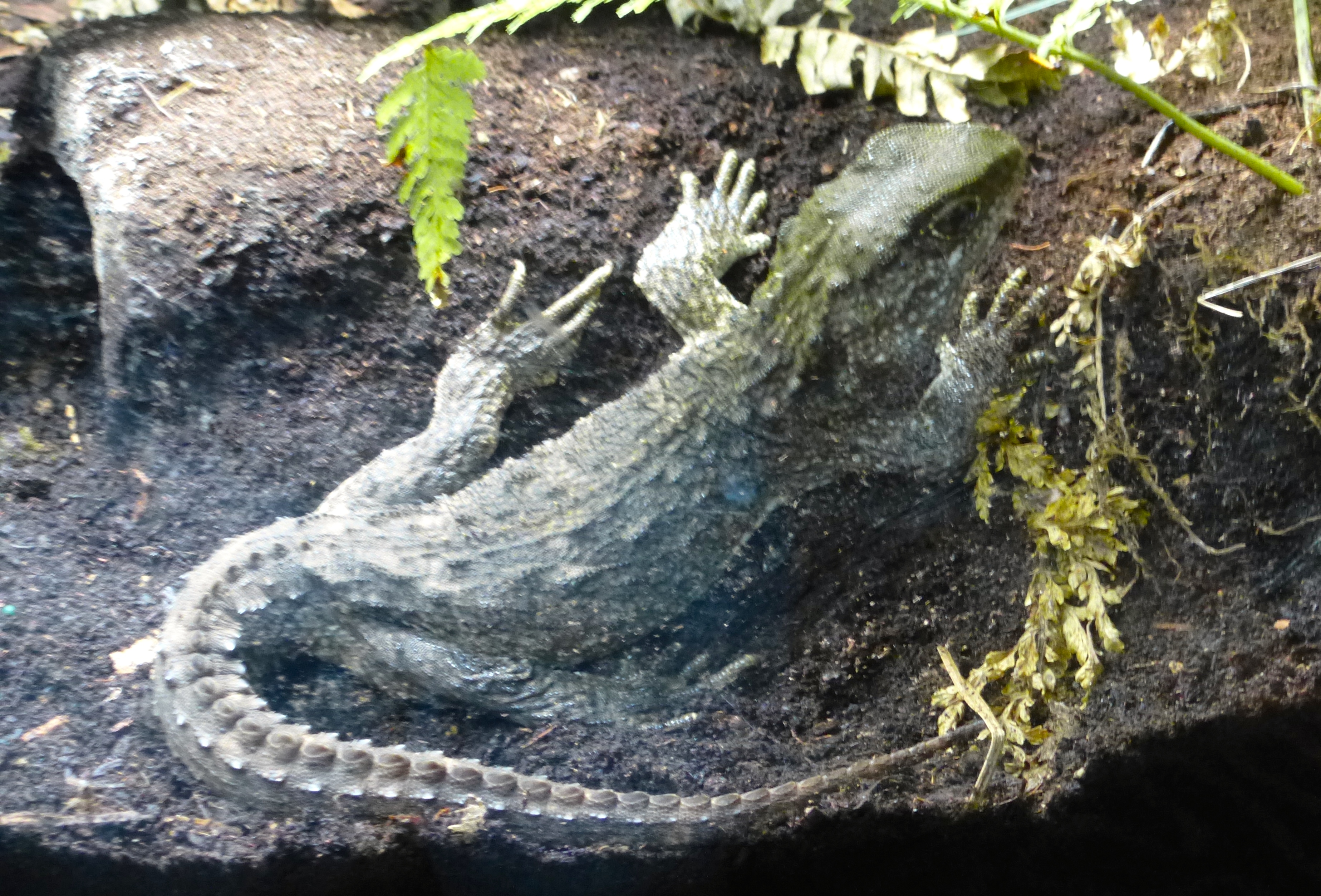 [Further notes on tuatara by Greg Mayer:  WEIT readers may feel a stir of recognition when viewing this fellow, because I think we’ve met him before, in a picture taken by a friend who visited New Zealand several years ago. It looks like the same exhibit, and tuatara are, as Jerry notes, long lived, so my first guess would be that it’s the same guy. I’m not sure this is the first tuatara Jerry has seen in life, but I’d wager it’s the first one he saw in a photo, and then in life!

Tuatara are the primitive sister group of lizards and snakes, lacking the fully developed hemipenes (dual penises) characteristic of the latter two, and retaining the lower temporal arch of bone below the lower of the two openings in their cheek bones (although it has been proposed that the lower temporal arch in tuatara is a reversion to the primitive state, and not a retention of the ancestral condition).

They are perhaps best known for being the sole survivor of the order Rhynchocephalia from the Mesozoic, having changed little in skeletal morphology since that time, hence the oxymoronic but apt moniker “living fossils”.  It came as a great surprise in the 19th century when it turned out, on closer inspection, that they were not lizards. Though often misleadingly associated phylogenetically with dinosaurs and even crocodiles, they are not closely related to either, other than that they all (including lizards and snakes) are included within the great reptilian group of diapsids. (‘Diapsid’ referring to the two [di] openings [apses] in the cheekbones found in this group, which also includes birds and pterosaurs.)

Tuatara are also famous for having a well developed third or parietal eye, having both a lens and retina, though it is probably not capable of forming an image. The parietal eye is not a degeneration from a once fully three-eyed animal, but a more developed form of a rudimentary sense organ found in many vertebrates.

Once found on the main islands of New Zealand, the single species now survives only on a number of offshore islands, where they are carefully protected. These cool, windswept islands are an unusual habitat for most modern reptiles, and the tuatara have an unusual life history, sharing burrows with sea birds and living a very long time. Tuatara (plural and singular are the same in Maori, though ‘tuataras’ is often used when the word is adopted into English) have long been a favorite subject here at WEIT and you can find more by looking here.] 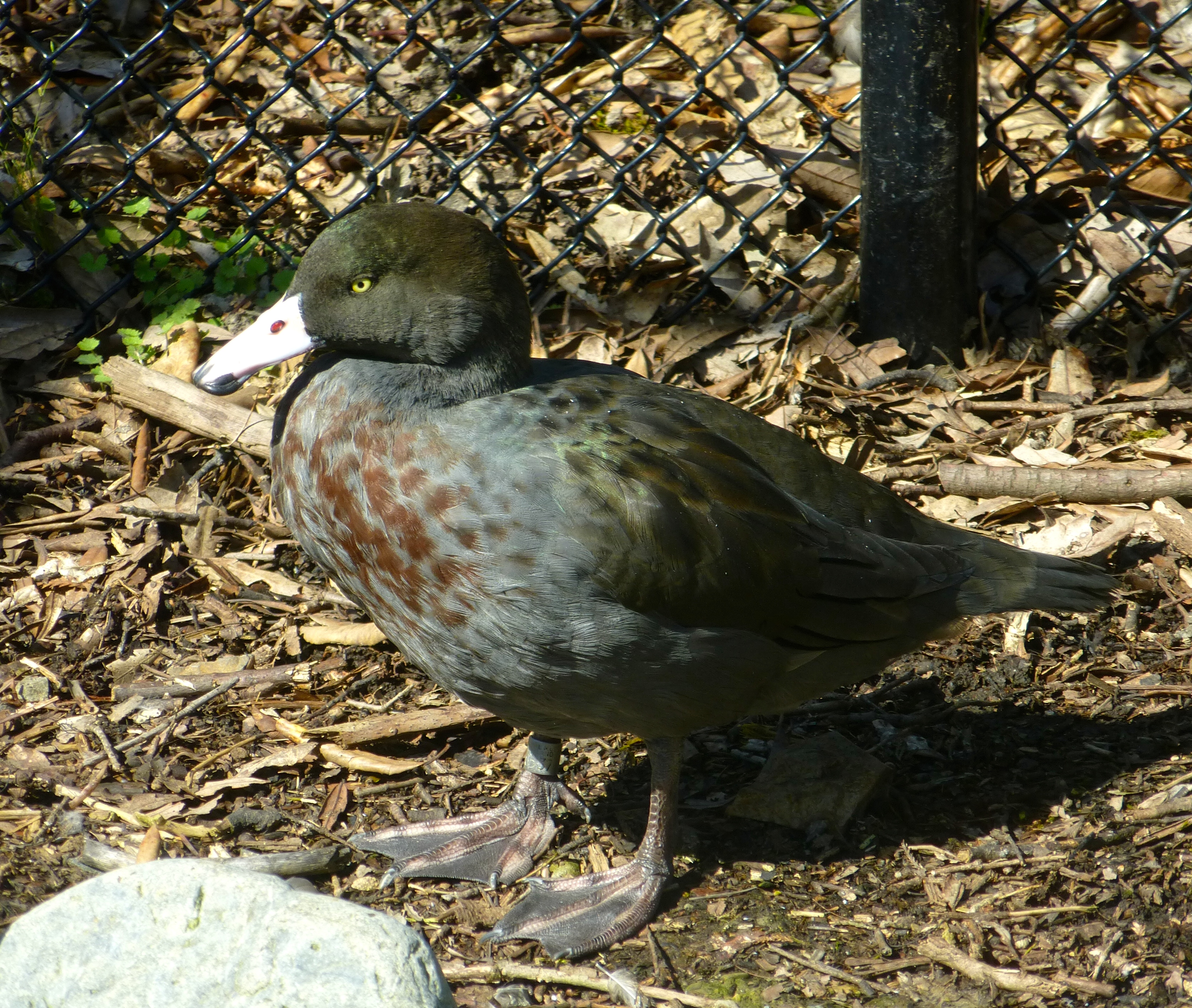 And the pāteke, or brown teal (Anas chlorotis), which is making a bit of a comeback: 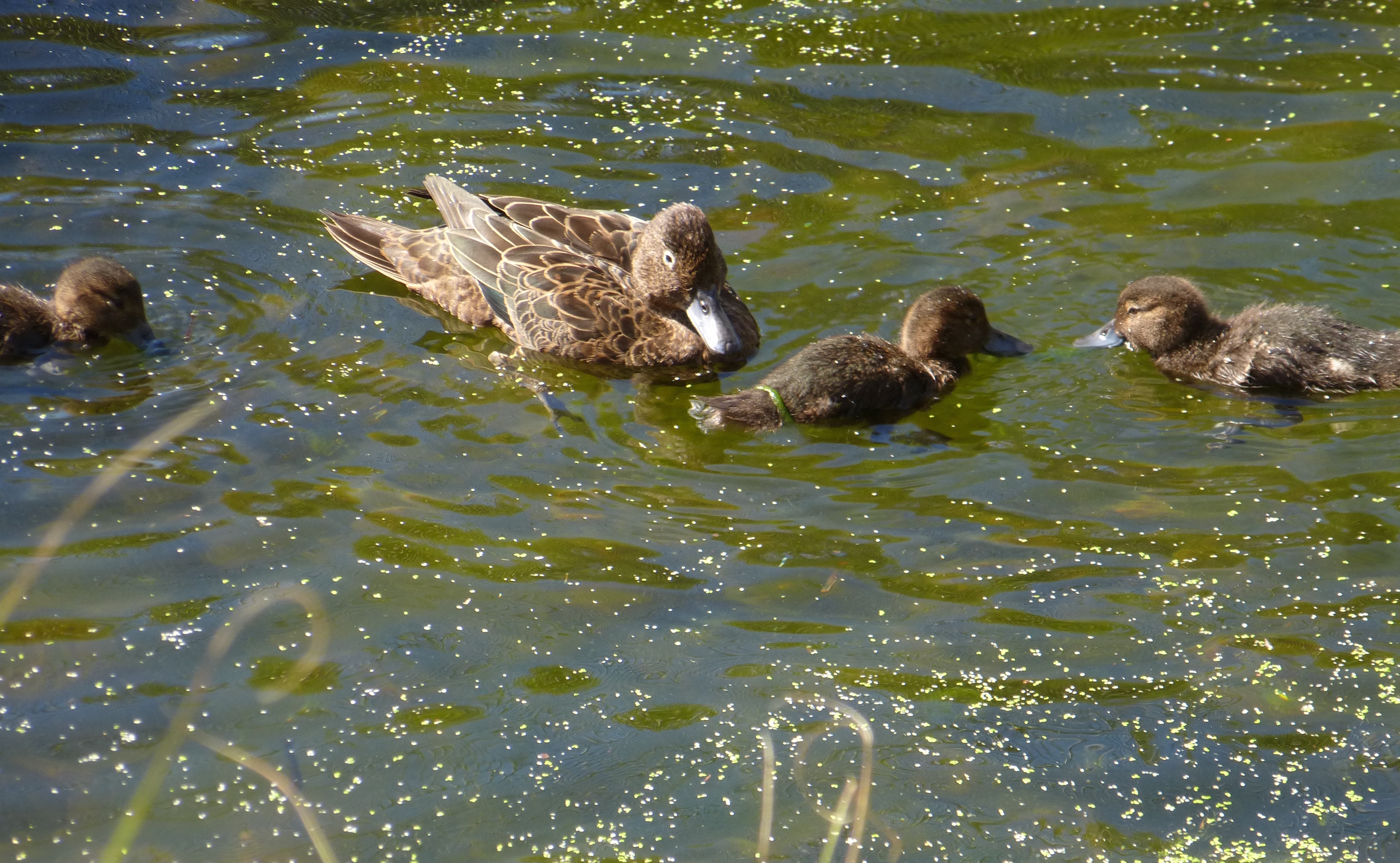 Lancewood (Pseudopanax carassifolius, Maori name “horoeka”). This is the adult, and it’s one of those trees that develops a crown of foliage only after it reaches a certain height. The younger trees, shown below this one, have thorny, tough, and hard-to-reach foliage. It’s thought that they grow this way as an ancient remnant of their evolution to avoid browsing by the now-extinct moas.

Here’s the juvenile. Experiments using living ratites show that they lose weight if forced to browse on young lancewood, but gain weight if left to browse the older foliage, supporting the “moa hypothesis” 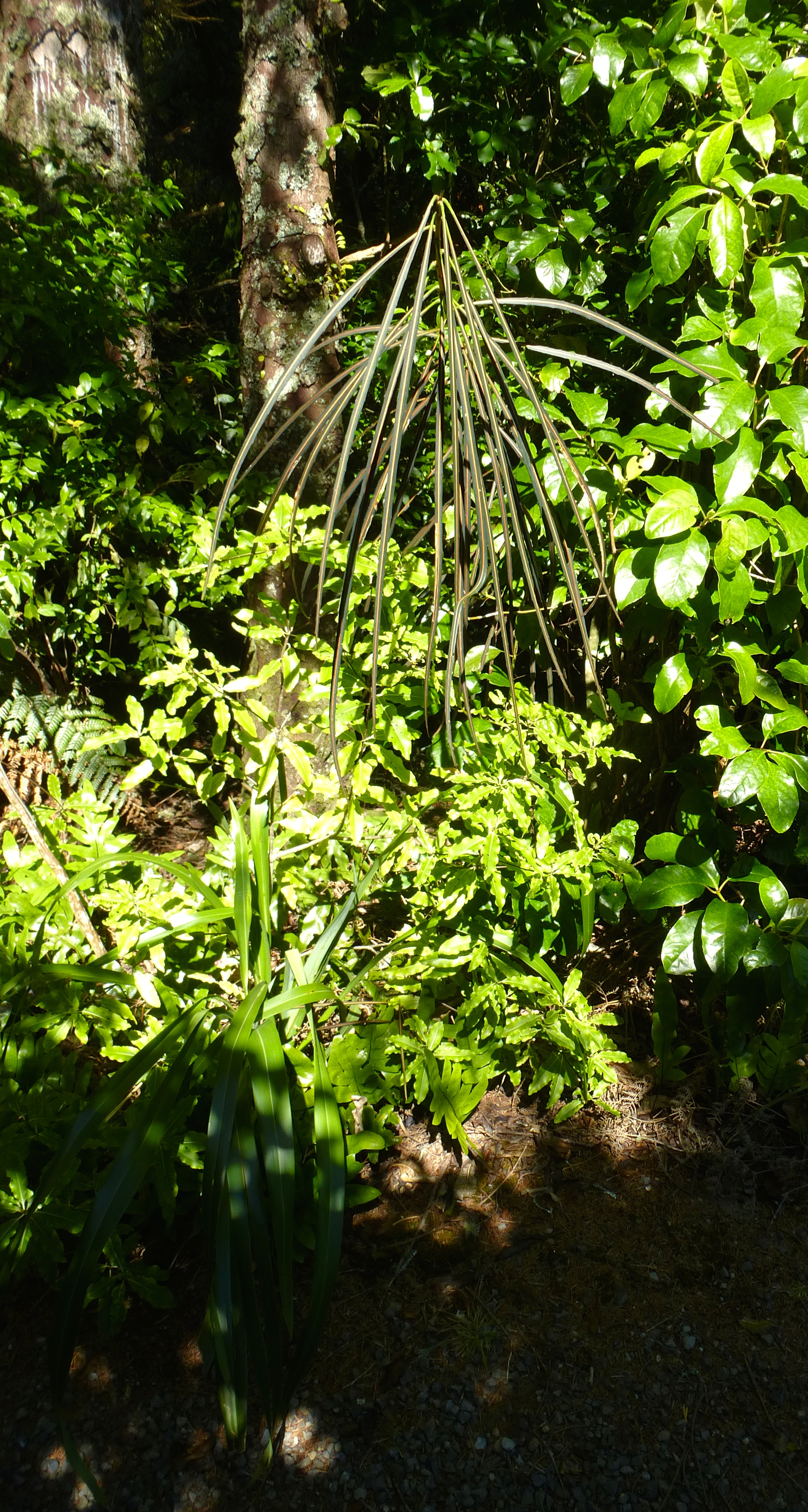 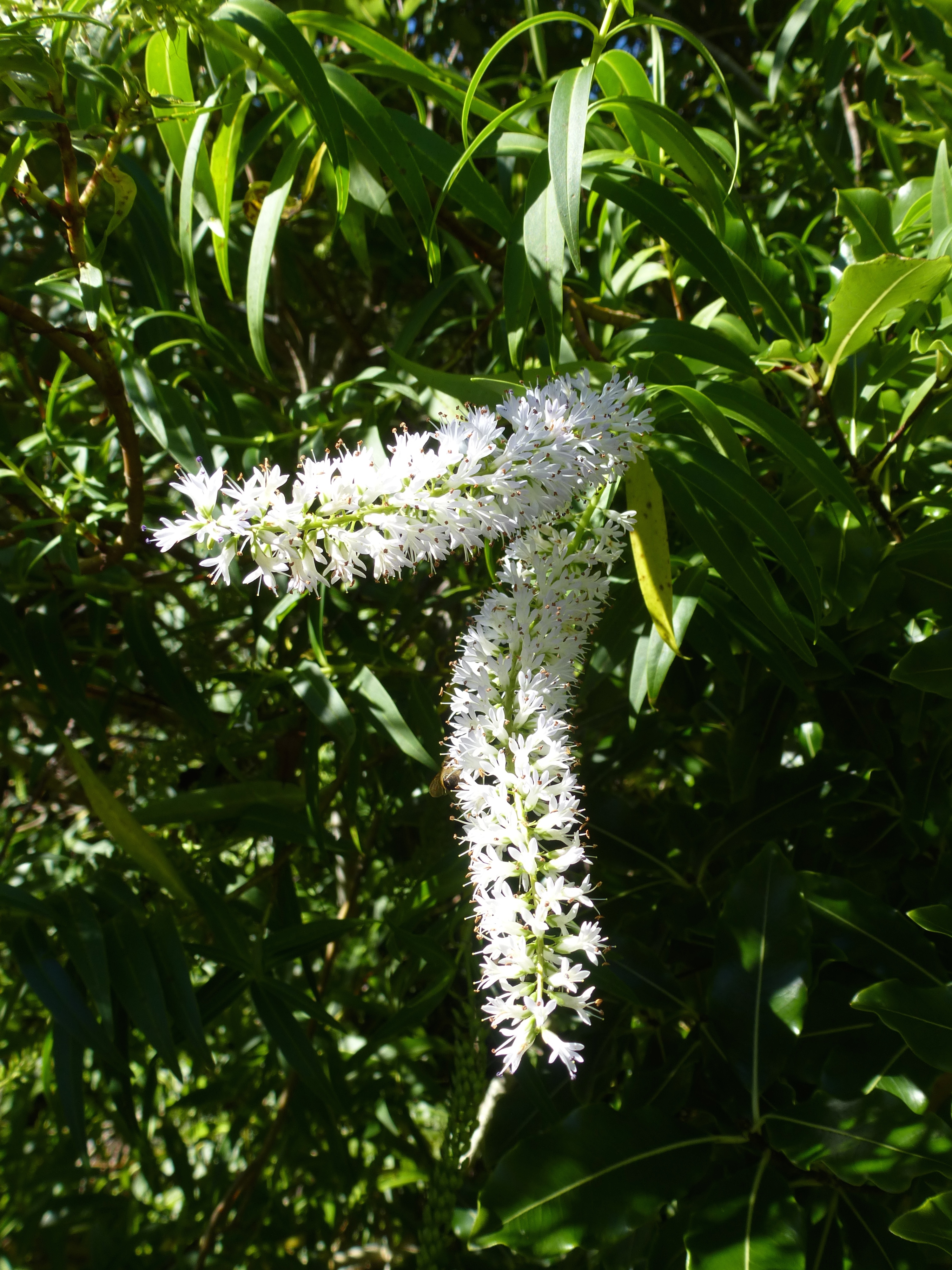 Karamu (Coprosma robusta) another endemic plant, like nearly all New Zealand species, has at best small fruit. That’s because birds and bats were the only seed dispersal agent, as there were no endemic terrestrial mammals that couldn’t fly. These are the berries that the keeper (and then I) fed the kõkako. 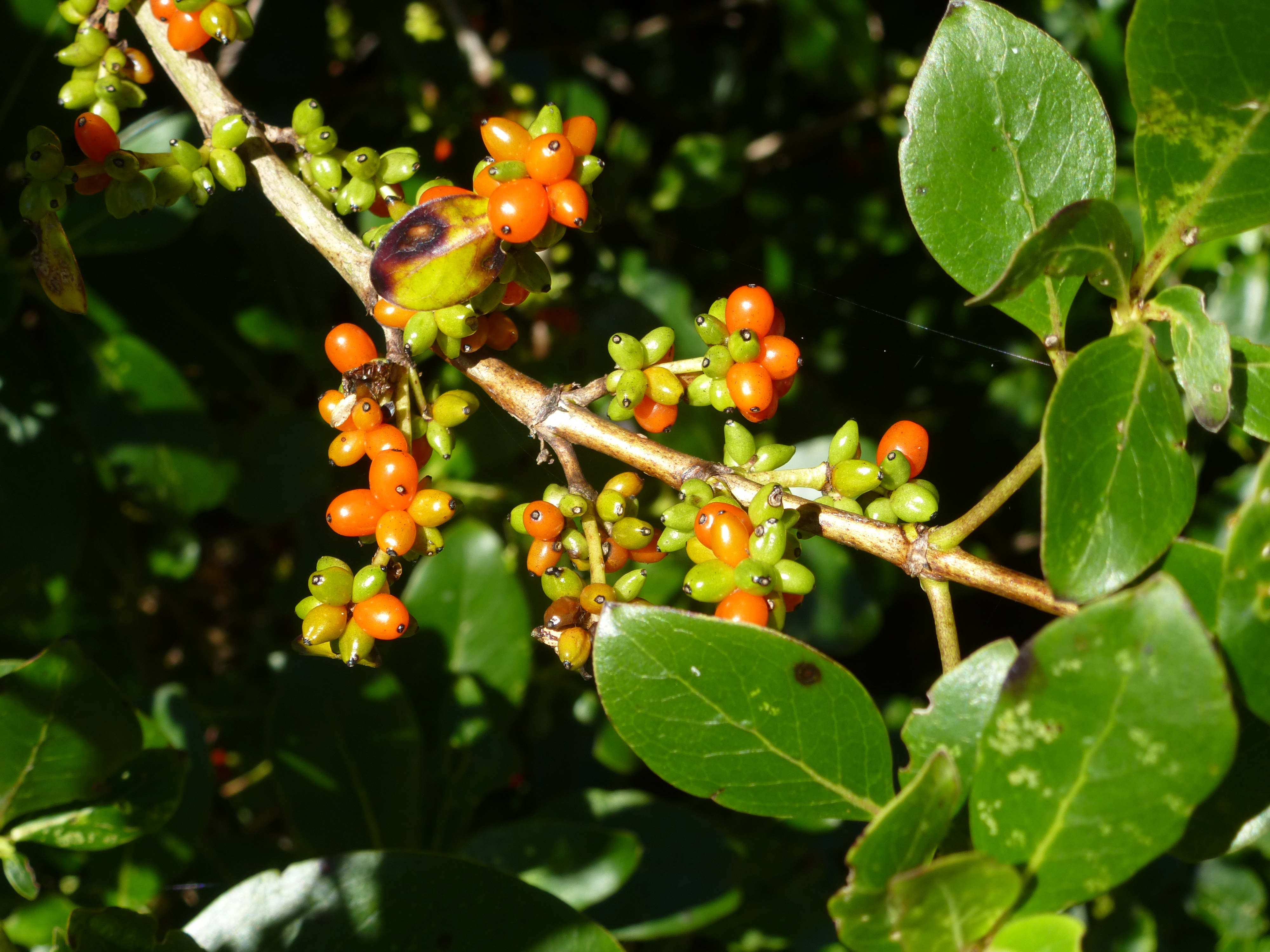 Easter orchid (Earnia autumnalis; “raupeka” in Maori). Phil detected it simply because, as we walked under the host tree, he smelled vanilla (and so did I). He immediately said that there must be an Easter orchid around and, sure enough, one was right above us. The plant is known for its strong vanilla-ish scent 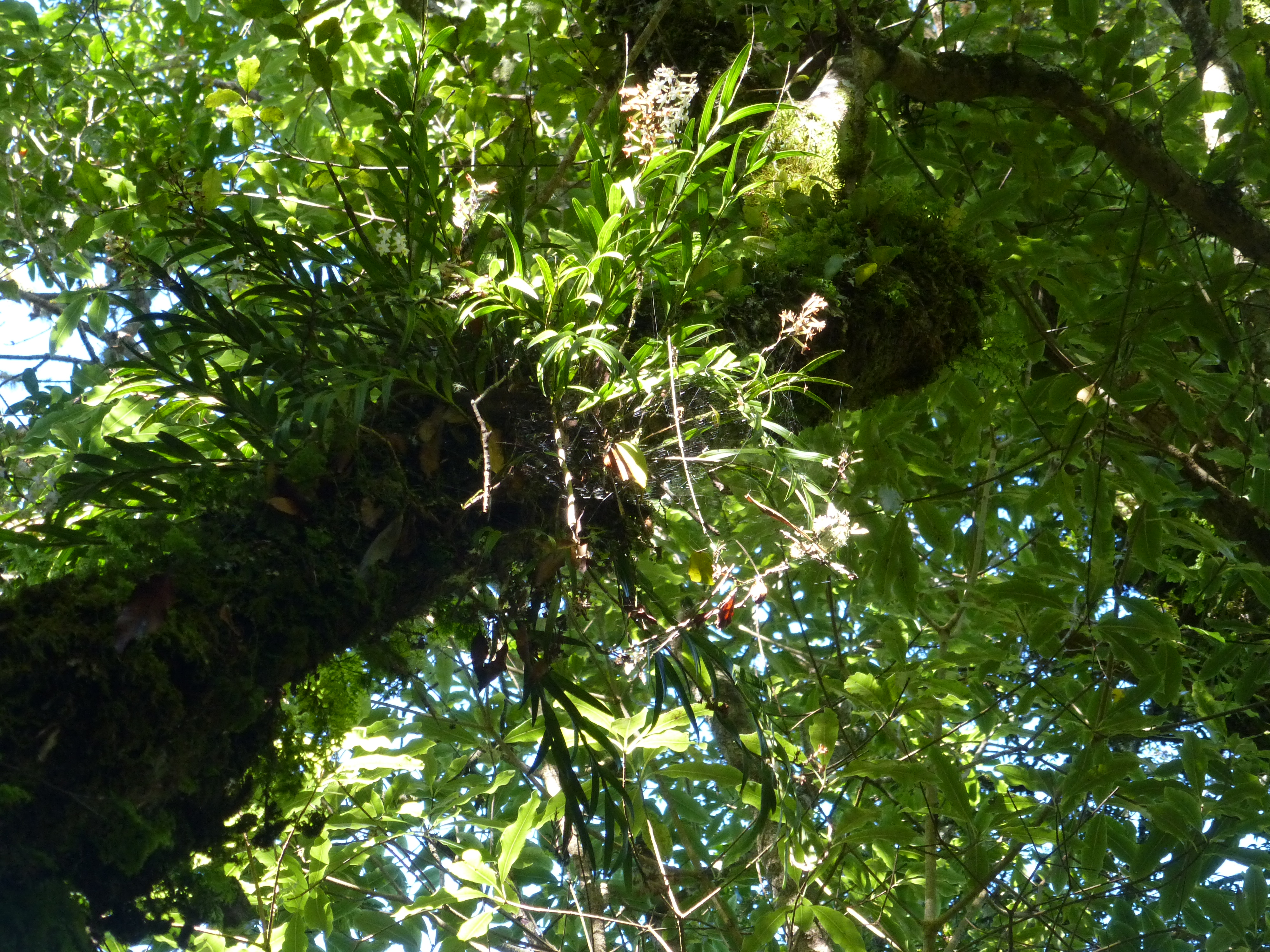 How many groups of plants can you see here, including the big tree hosting all the others? 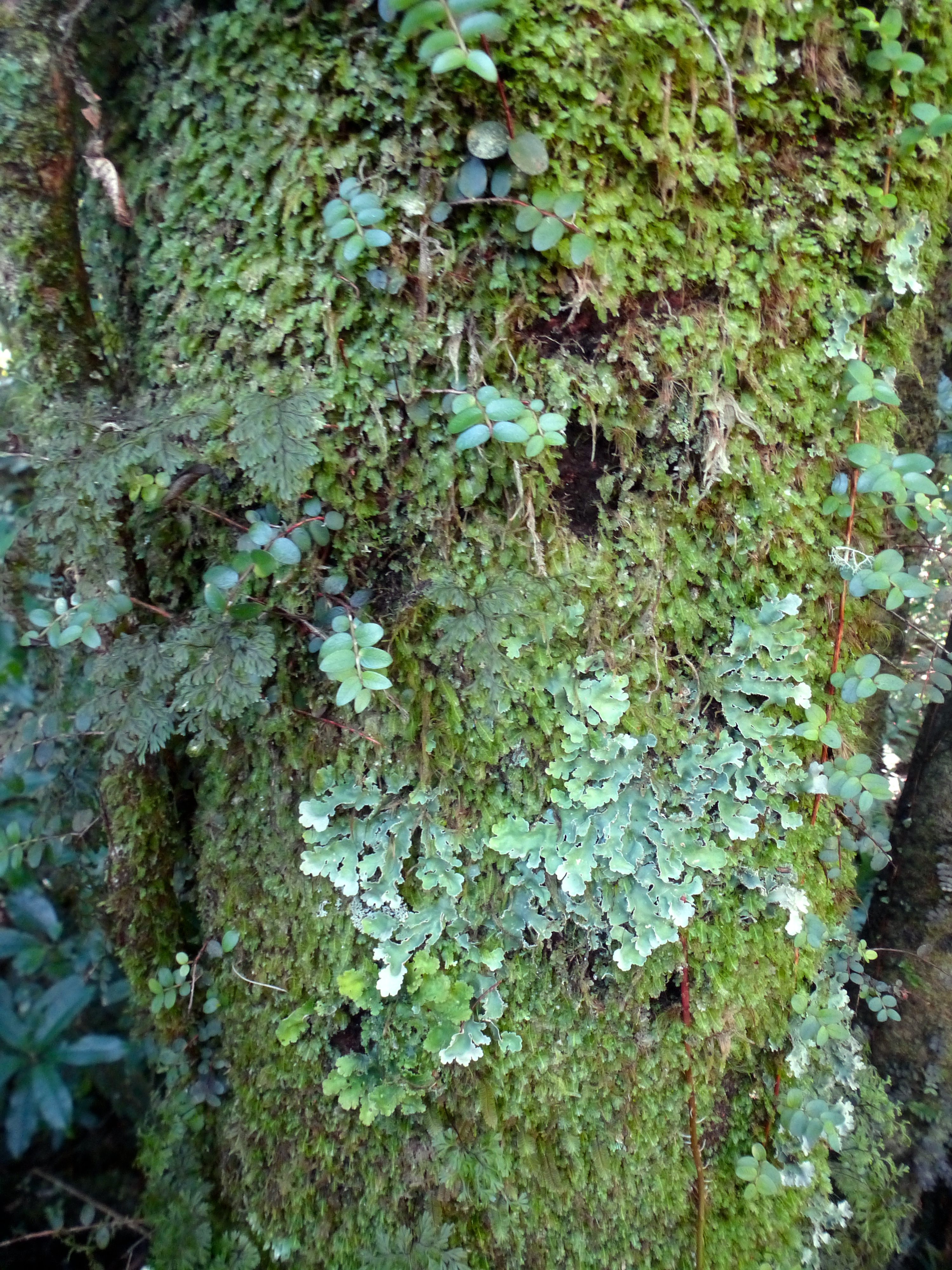