On Wednesday I booked bus tickets up to Arthur’s pass and back, giving me over eight hours in the area. Surely I’d see a kea, then, and that was my goal.

This bird (Nestor notabilis) is the world’s only alpine parrot, and has been largely extirpated by human activity, including clearing land and shooting the birds, who sometimes rip open the backs of sheep to eat the fat. They also have a fondness for lead, which they chew on car wheels and old houses. That has poisoned many.  The ranger told me that 3 birds were taken to hospital for lead poisoning last year, and released after recovery. But they’ll just poison themselves again, for, smart as these birds are, I doubt they can make the connection between chewing lead and getting ill later.

The ranger also told me that farmers and ranchers had shot 150,000 keas over the years, and the conservation folks seem helpless to prevent loss of the present population, estimated at between 1,000 and 5,000 birds. I could hear the frustration in his voice as he described the situation. He added that next week the conservation folks are having a big meeting to figure out how to save this bird. I hope they don’t have to take them into captivity!

Anyway, in my discussion with the ranger, I asked him where the greatest chance was to see kea. He recommended a 2-hour (total) hike up one trail to the south, where there were keas not accustomed to humans, and which I might be able to spy in the trees. But the best spot, he said, was in the village by the cafe, where these cheeky birds come around to cadge treats. So I did both. More below.

Here is the tiny tourist village of Arthur’s Pass from a trail on the north side. Beeches abound. 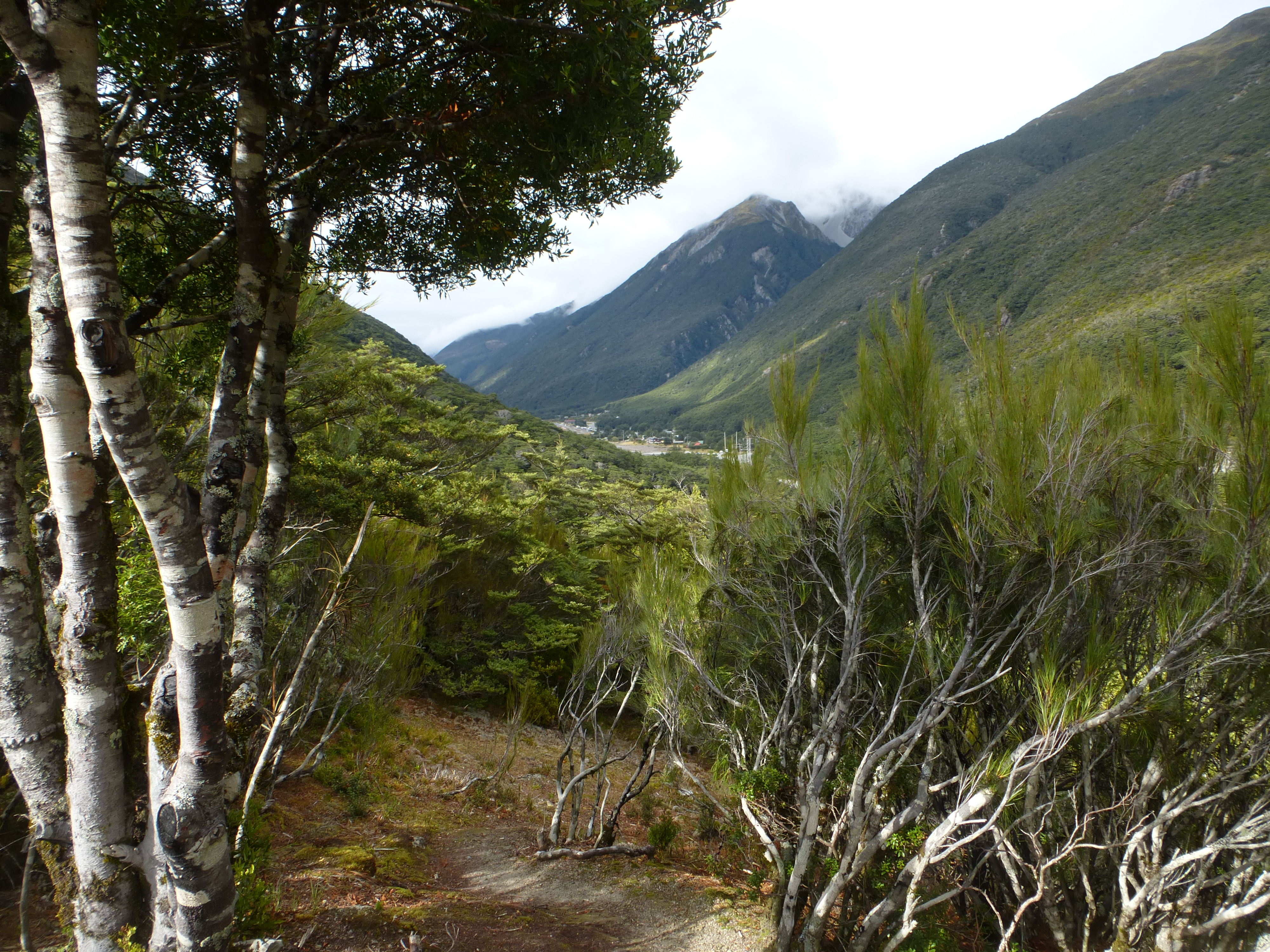 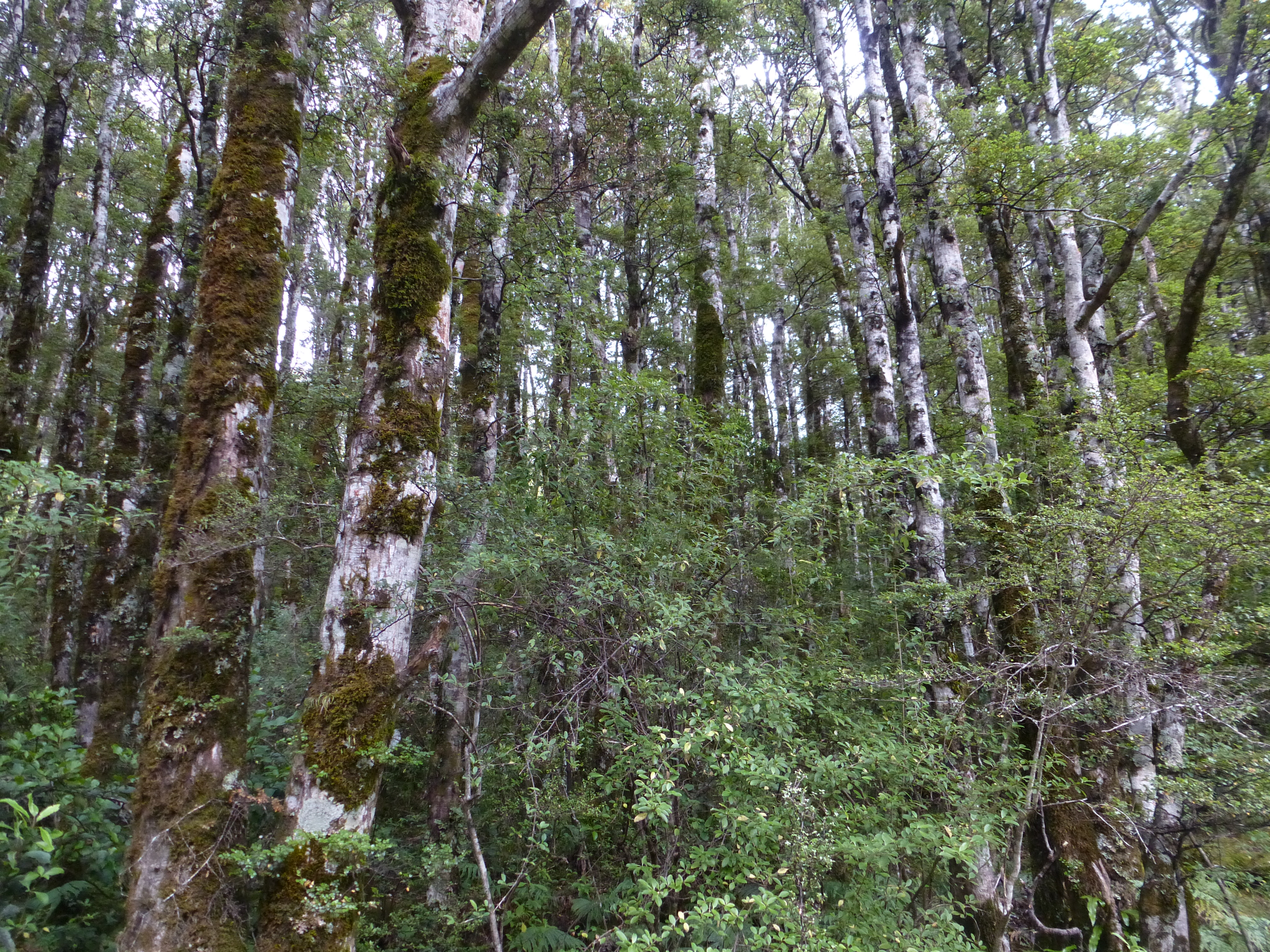 It’s another Lord of the Rings backdrop. Does anyone know what the plant is sticking up in the middle of the photo? 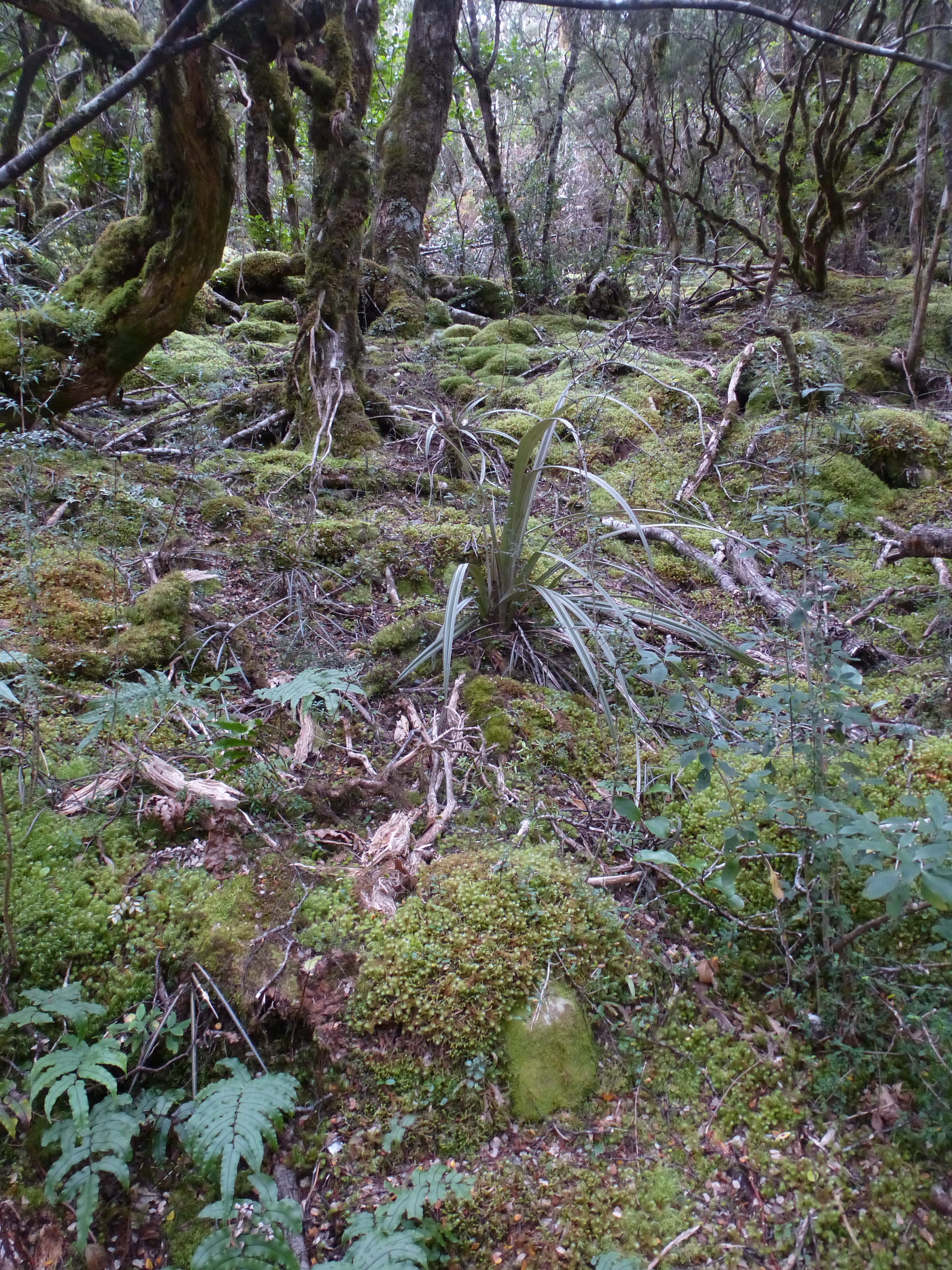 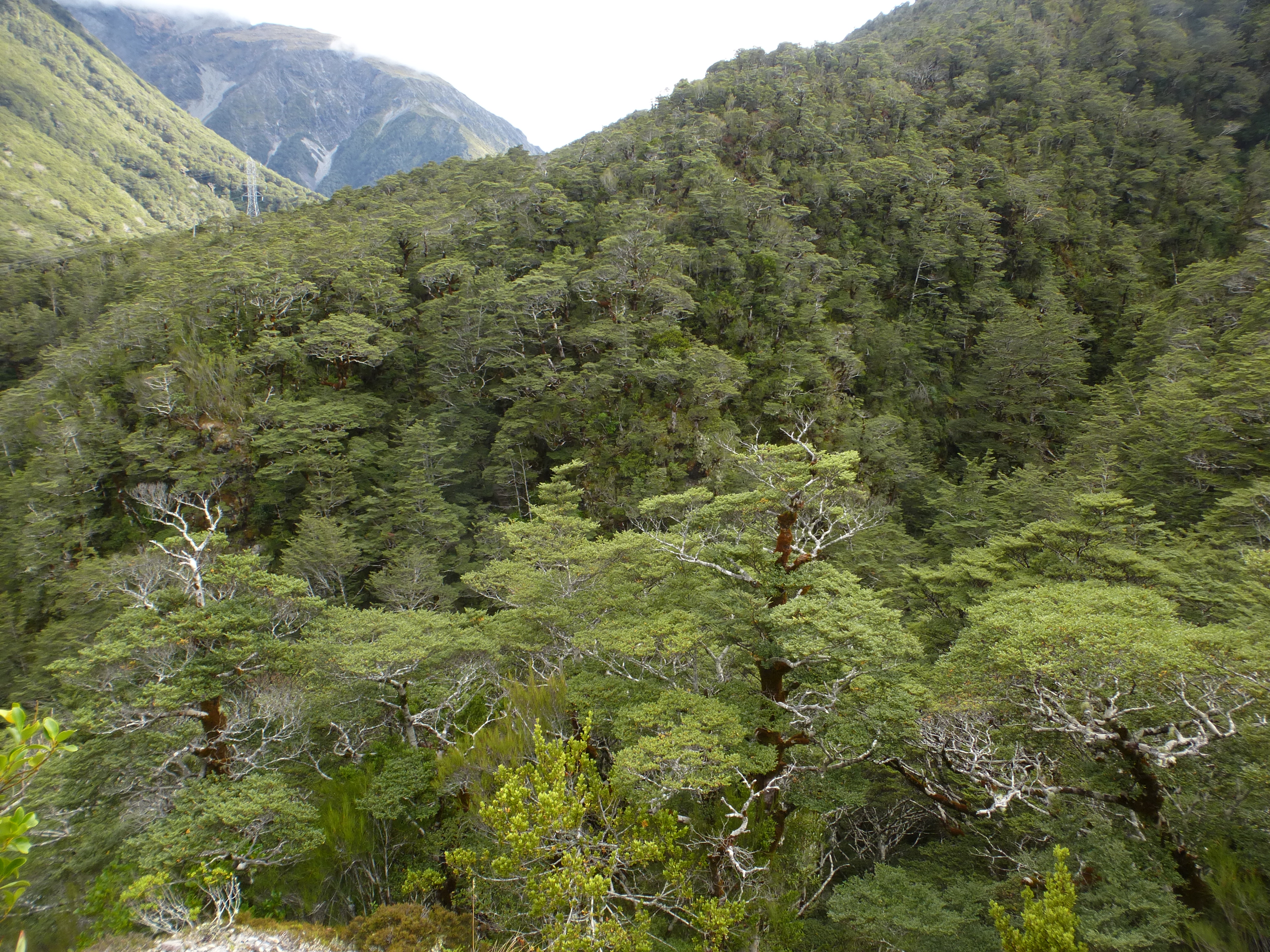 My guess is that this is red beech. 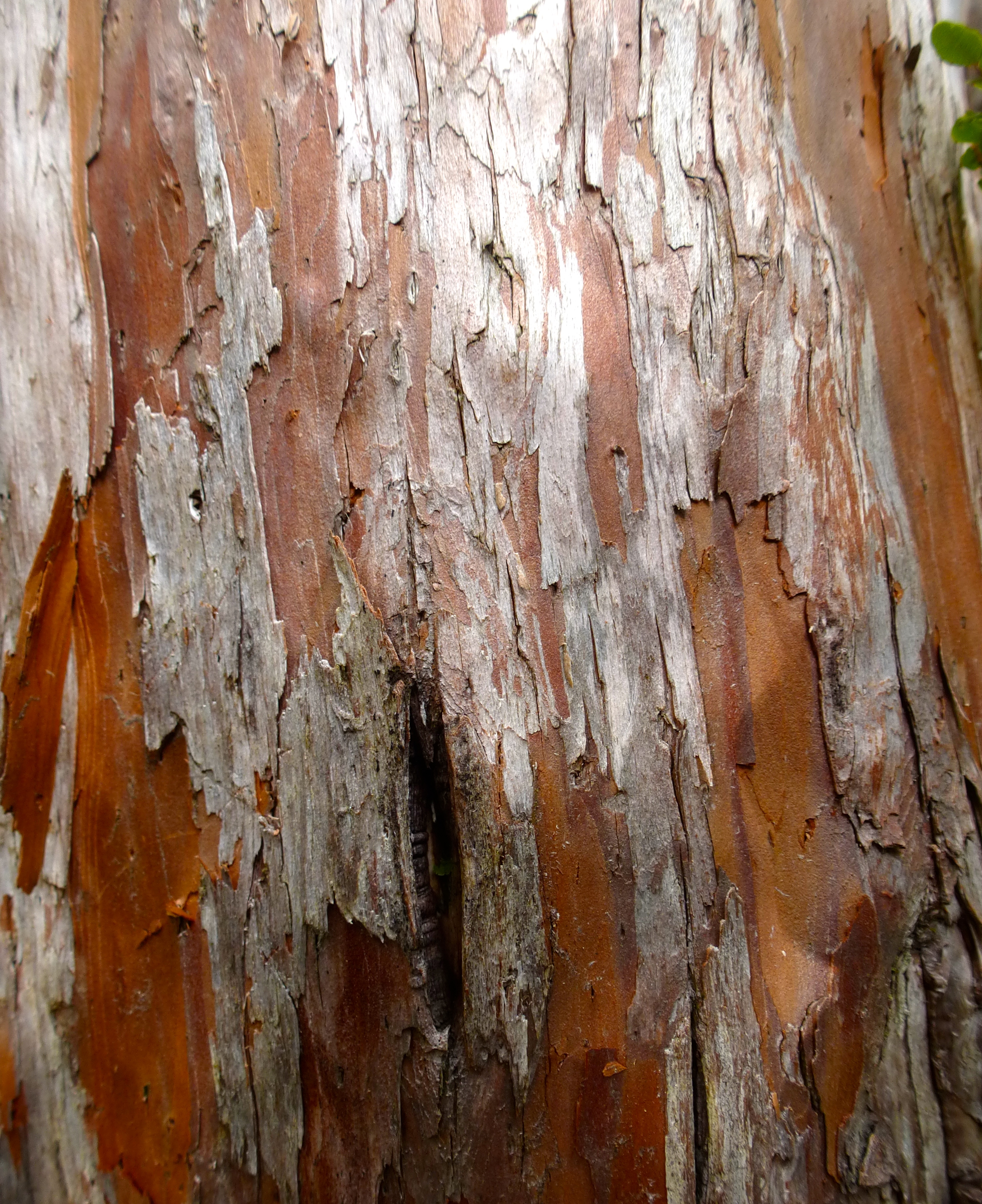 Old miner’s huts, from the turn of the 20th century (about 1908, I was told) still remain; some are used as vacation cottages, but this one looks abandoned: 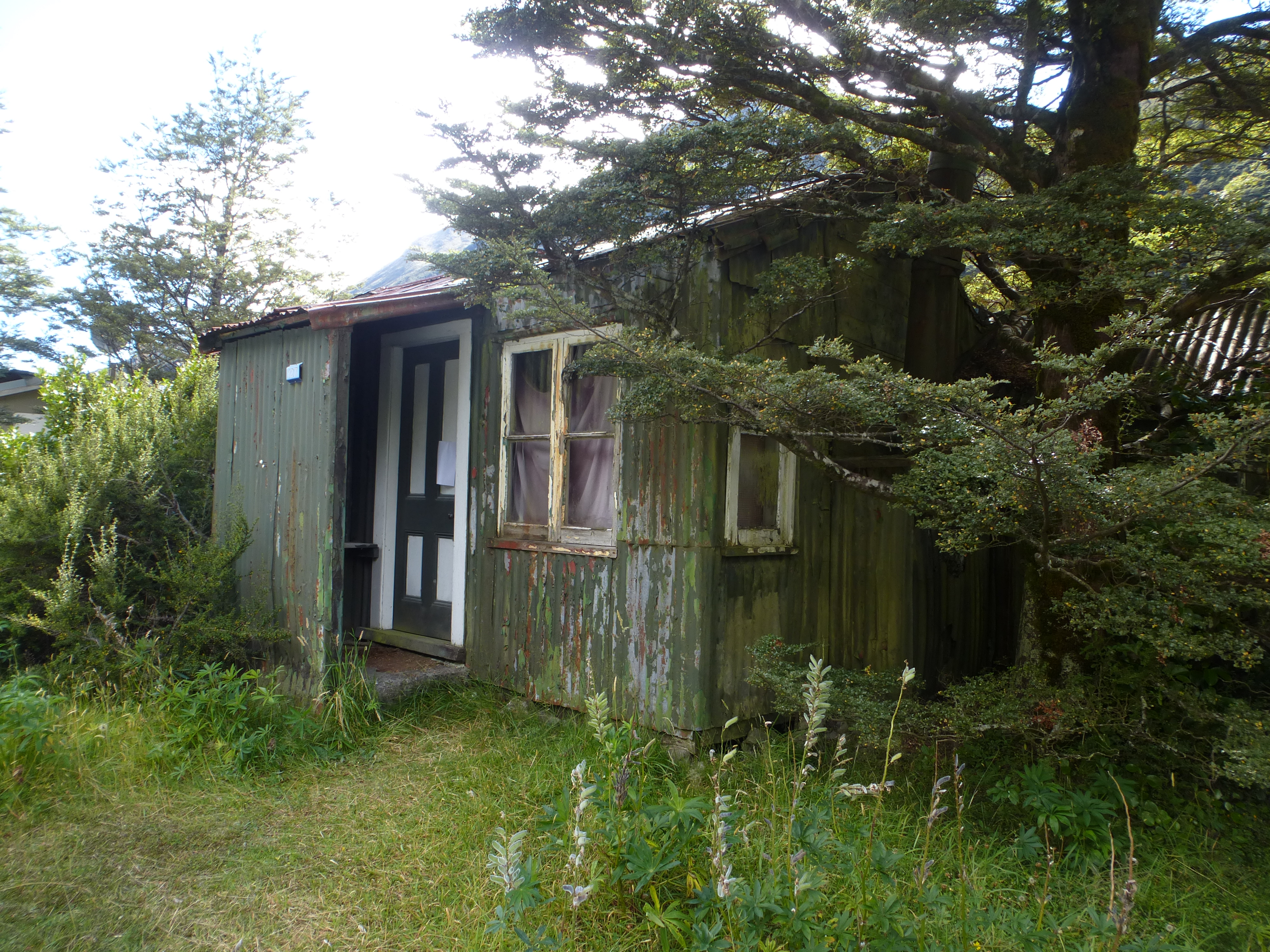 Everywhere there are signs about the keas and warnings not to feed them. The ranger also told me that avocado will kill them quickly (he said avocados are toxic to many parrots), and bread and chocolate are also bad for them. I of course was determined not to feed them.  They lay eggs on the ground (apparently two eggs per clutch), and that’s bad, for introduced predators like the common brushtail possum from Australia (Trichosurus vulpecula), as well as stoats and rats, eat the eggs. Before Europeans came, there were no land mammals on New Zealand save two species of bats, so egg predation was low, and many birds evolved flightlessness. 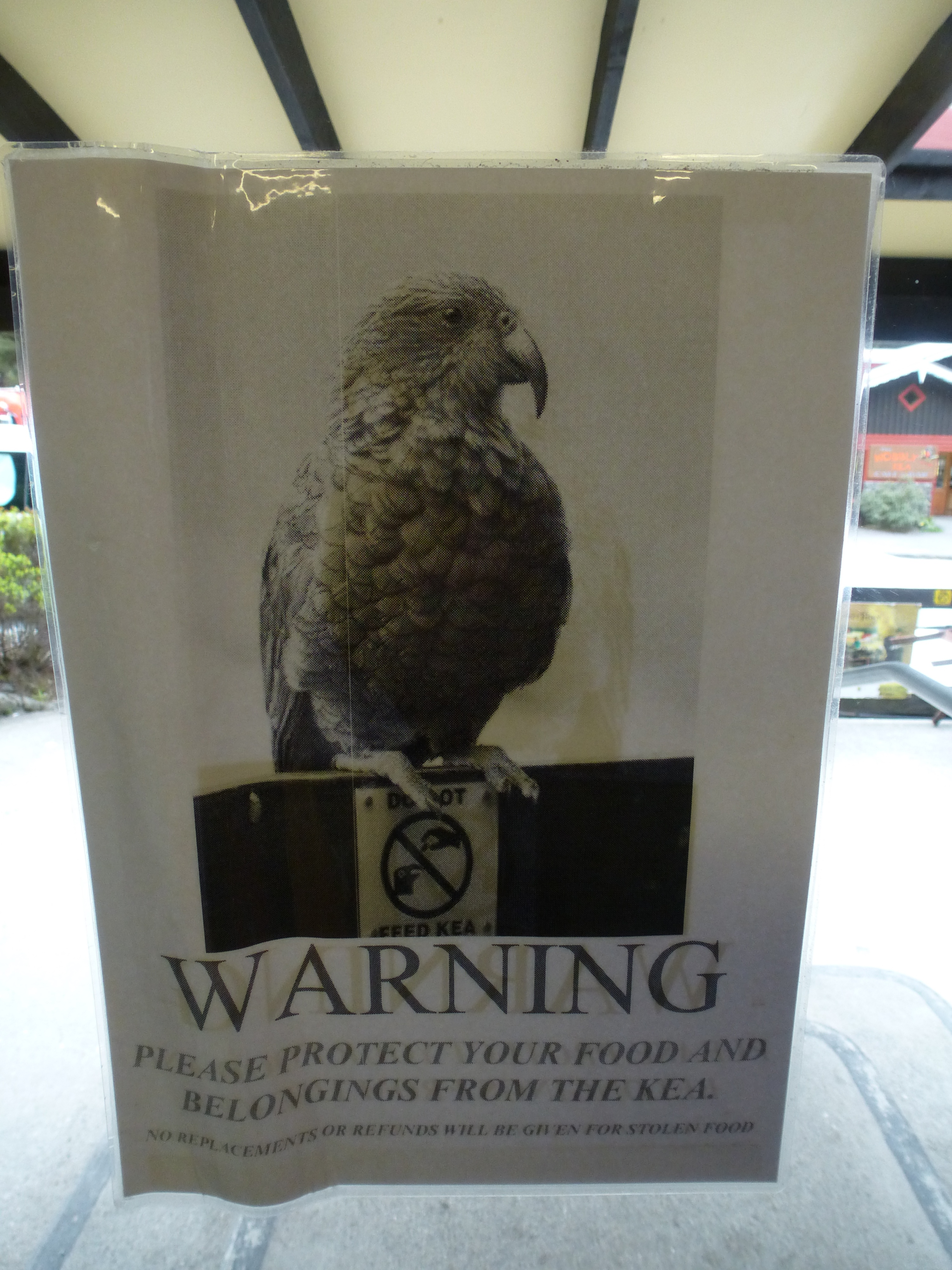 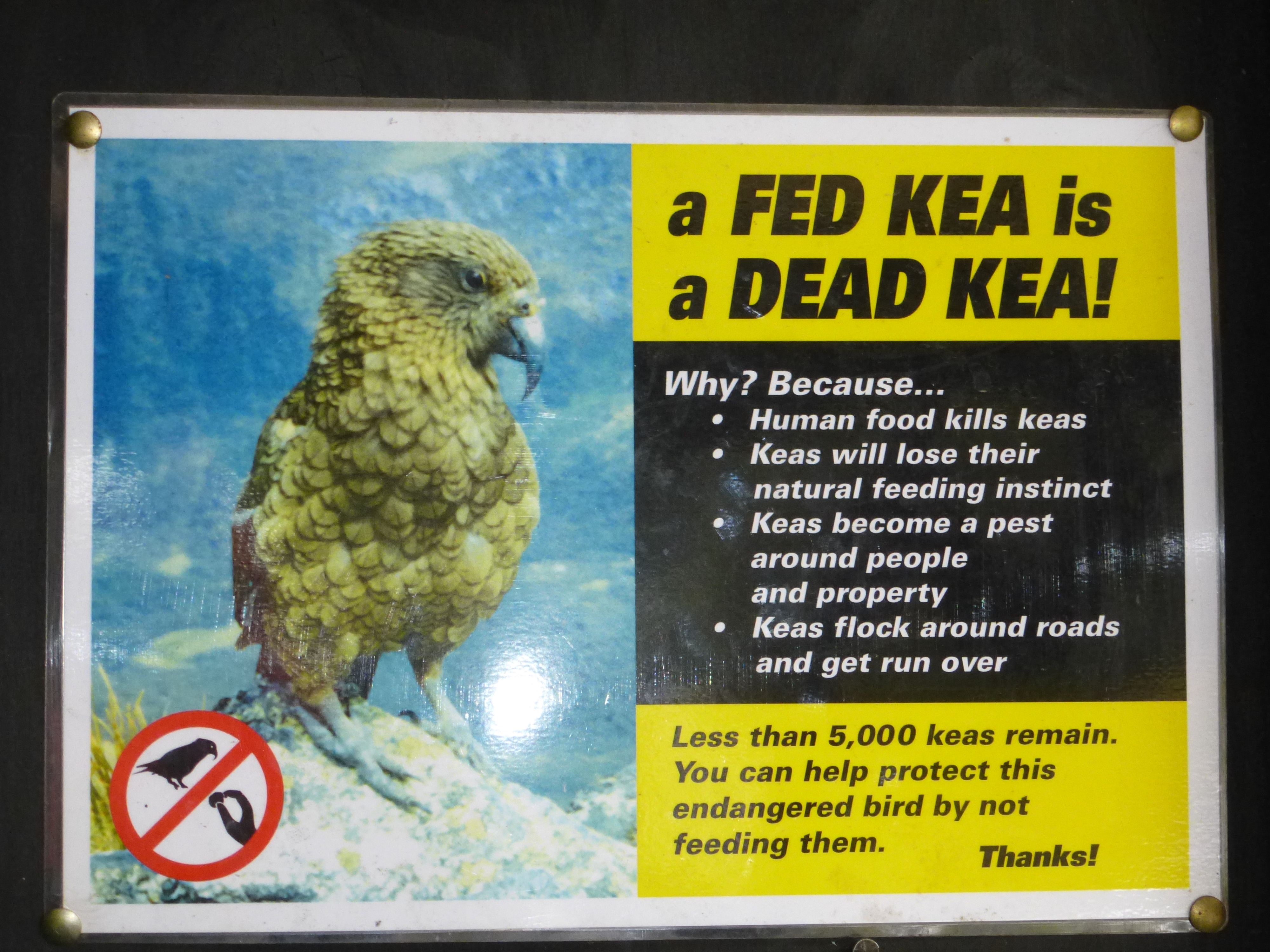 Again from the ranger: at least 15 keas disappeared during the last year around the pass. 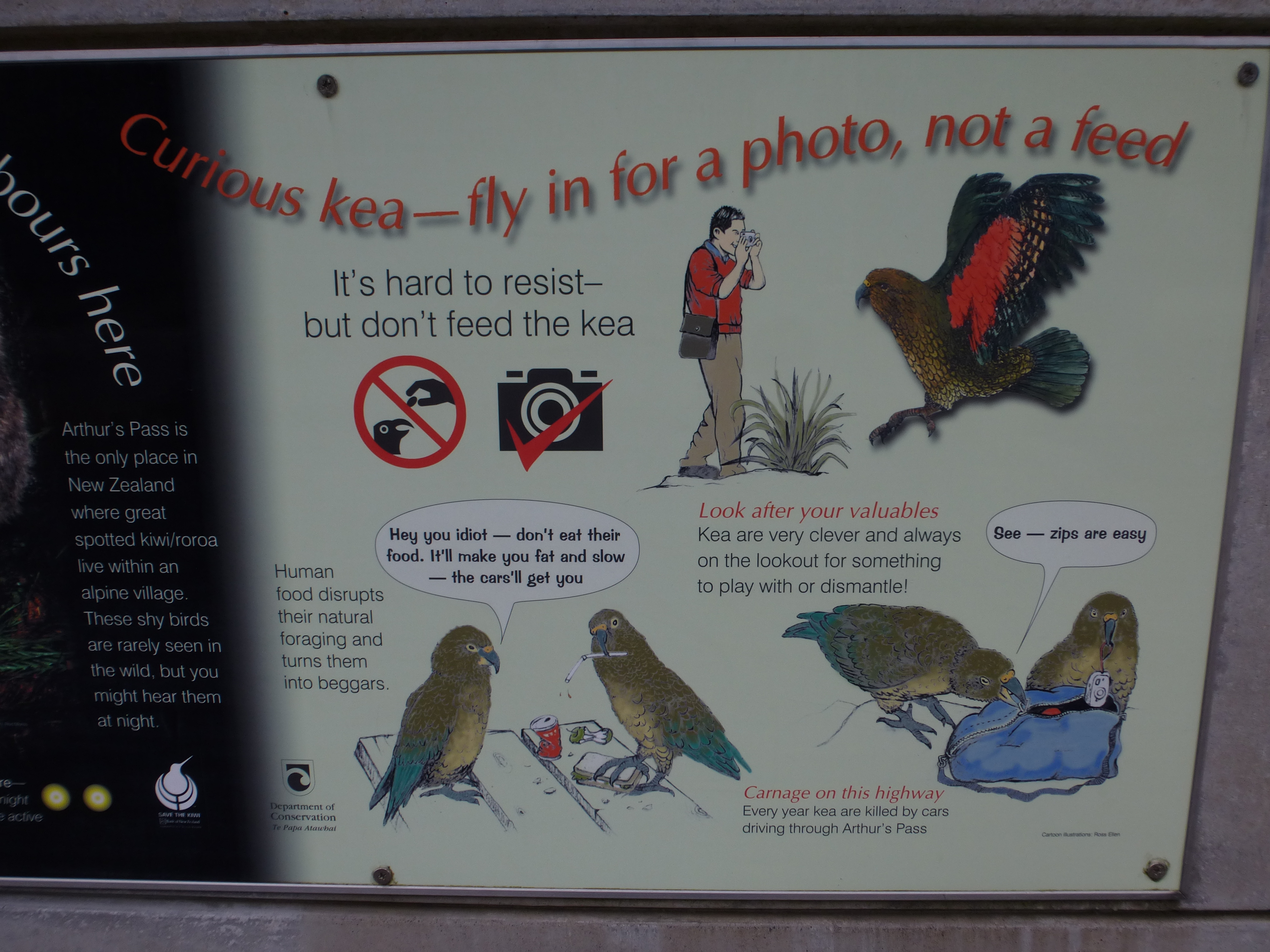 Possum trapping and killing is encouraged, as they are huge predators of native birds. Much as I hate the idea of killing anything, this seems reasonable if we want to keep the marvelous products of evolution that fly around New Zealand. A few decades of predation can destroy millions of years of evolution.

Possum skins are on sale in many places, including the ranger station, and they encourage people to buy them so that a “possum skin trade” will develop, encouraging further reduction of these invasive animals. 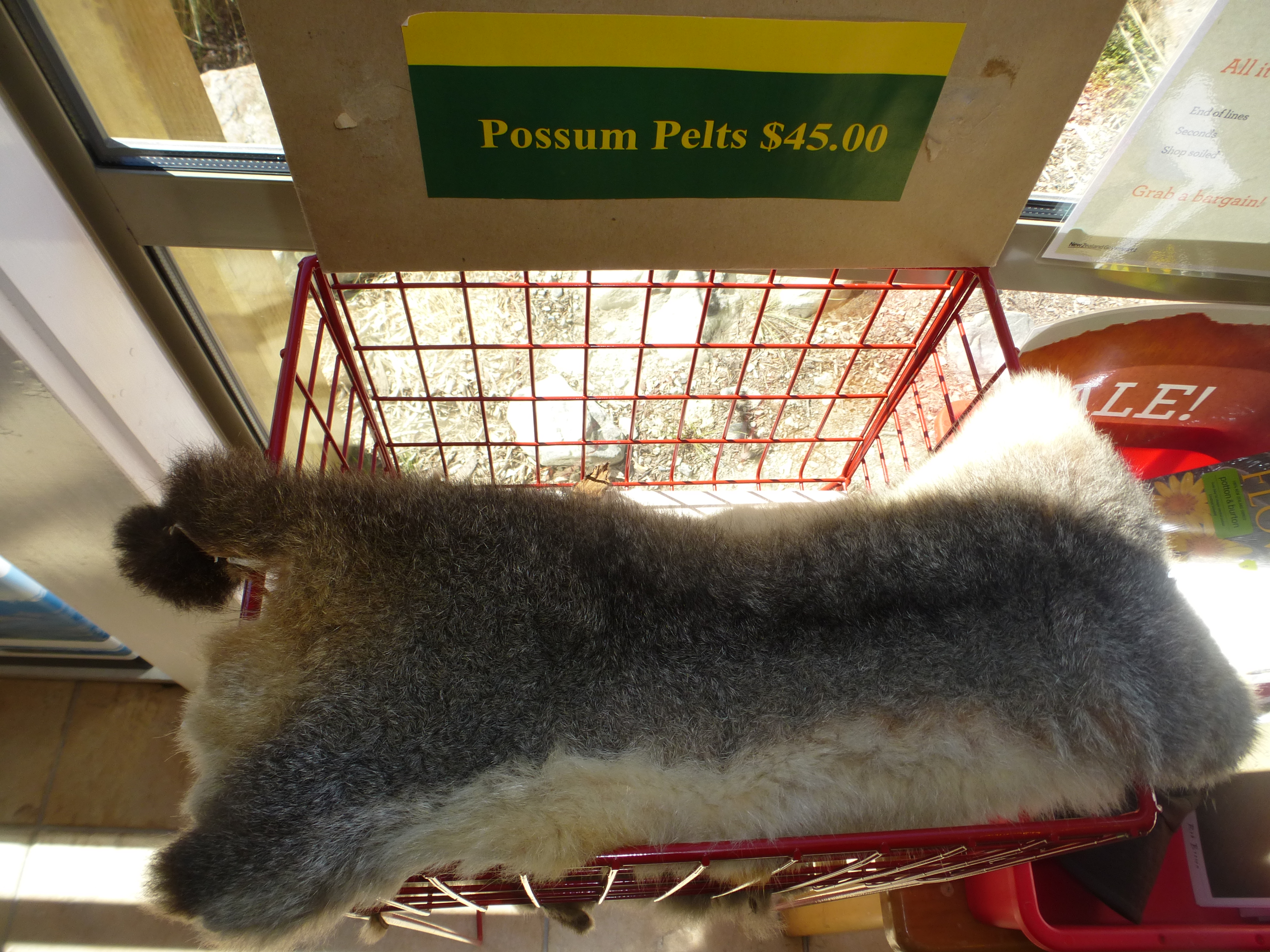 After my hike, i sat in front of the village store and cafe for what must have been four hours, waiting for kea to come. It was tedious, though I had the galley proofs of Richard Dawkins’s latest book (out in August) to distract me. I finished the book and waited on.

I asked the cafe workers if there were often kea there, and they said that yes, nearly every day they came. That was bad: I felt that I was going to have another non-experience, like that I had at Milford Sound. The weather was warm and sunny, which may have driven the birds up the mountain.

At 4:30 it was time to meet the bus going back to Greymouth. It was the same shuttle driven by the same guy, who let me ride up front with him. When I told him of my futile quest for kea, he regaled me with stories of his encounters with them (they sit in the middle of the road and won’t move when cars come by, they destroyed the top of his van once, and so on). But then he told me that, on the way back, he would stop in places where he’d seen kea before and give me a Last Chance to See. And so we stopped at several overlooks and pullouts on the way back to the coast.

And, at the very last one, there was a plump bird waddling around the parking lot. It was a kea, scrounging what food it could from the ground. I was so excited that I hopped from the van with my camera almost before it stopped.

And here are the results. Notice that the bird is gorgeous, with green feathers that turn violet on the edges and turquoise on the tail. Its wings are orange-red underneath, but I didn’t see that. Note, too, the wicked beak, with which these birds strip chrome and rubber from cars. Also, it’s banded, as nearly every kea is around Arthur’s Pass (they know them all). 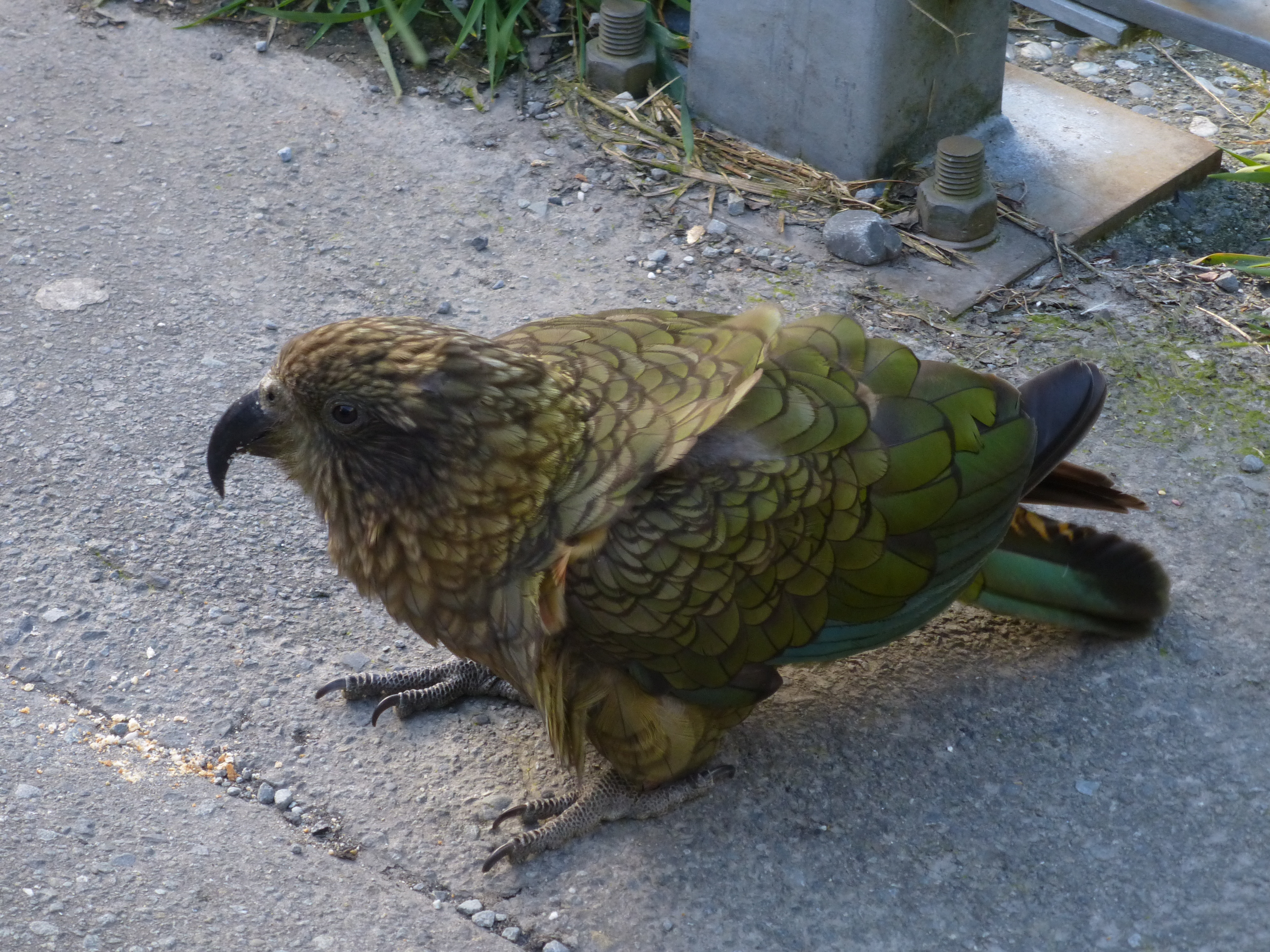 LOOK AT THAT BIRD!

This kea found apple peelings in the carpark. He held down some with his ungainly feet while eating them bit by bit. 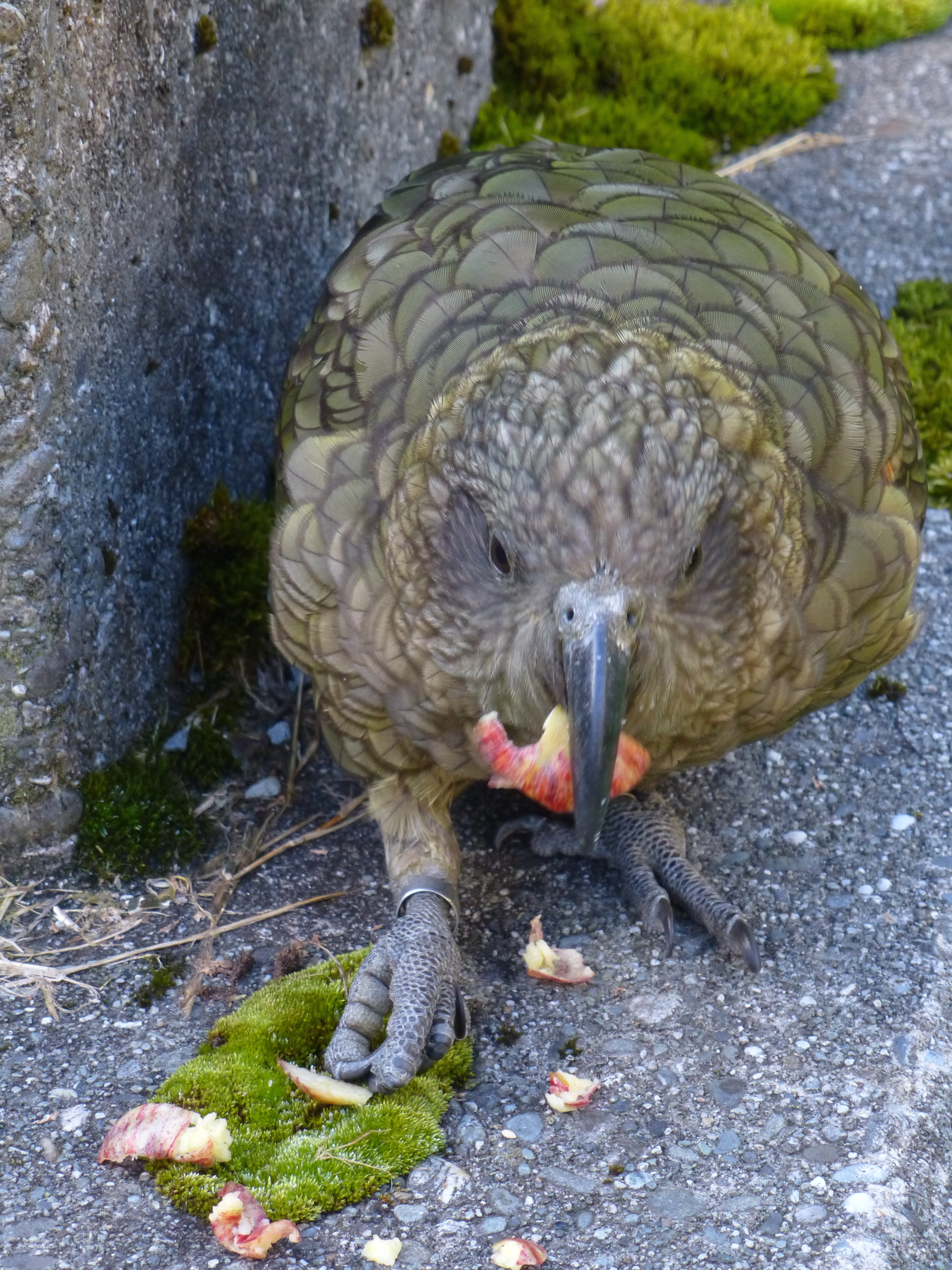 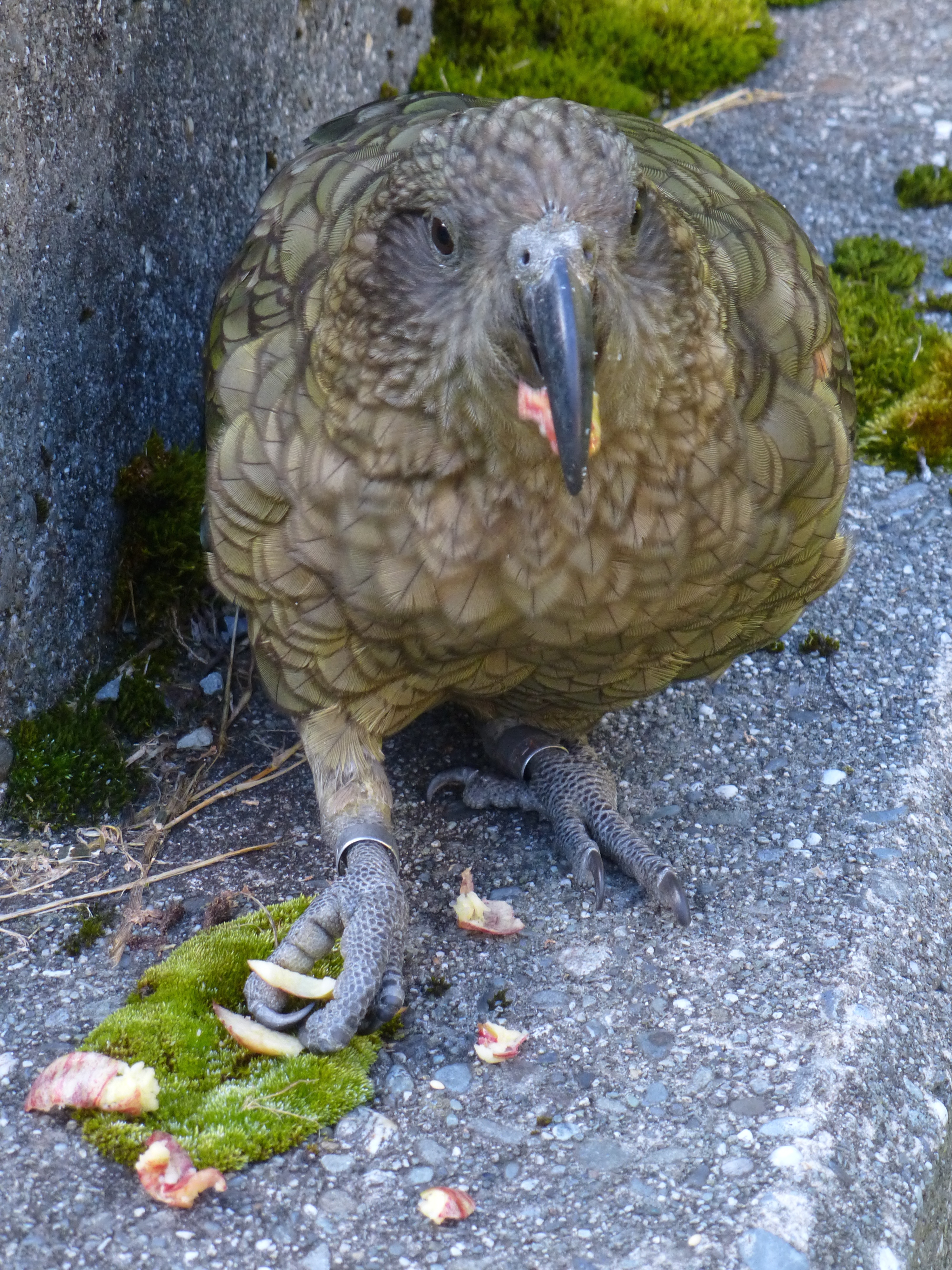 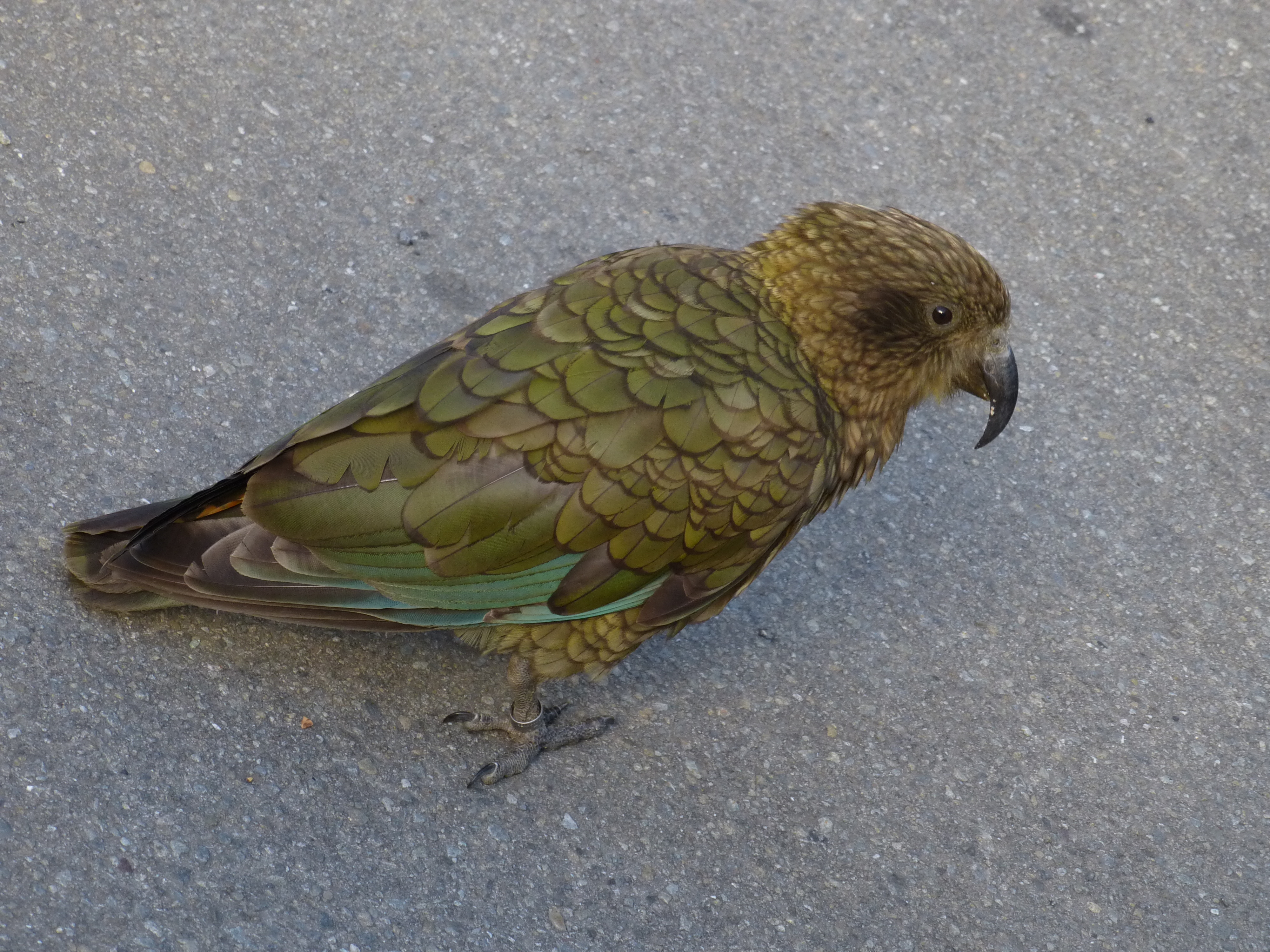 Nomming crumbs from the pavement: 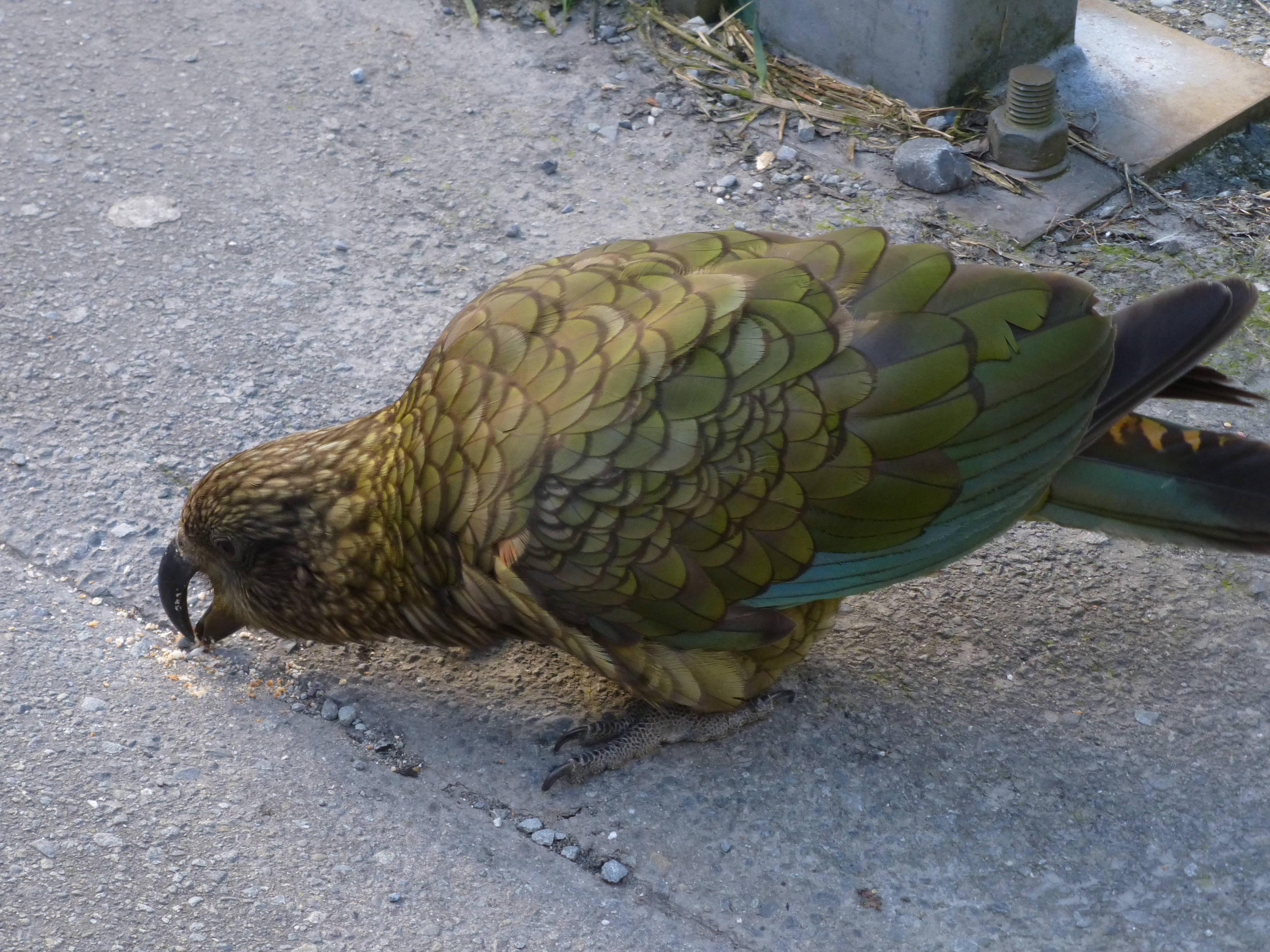 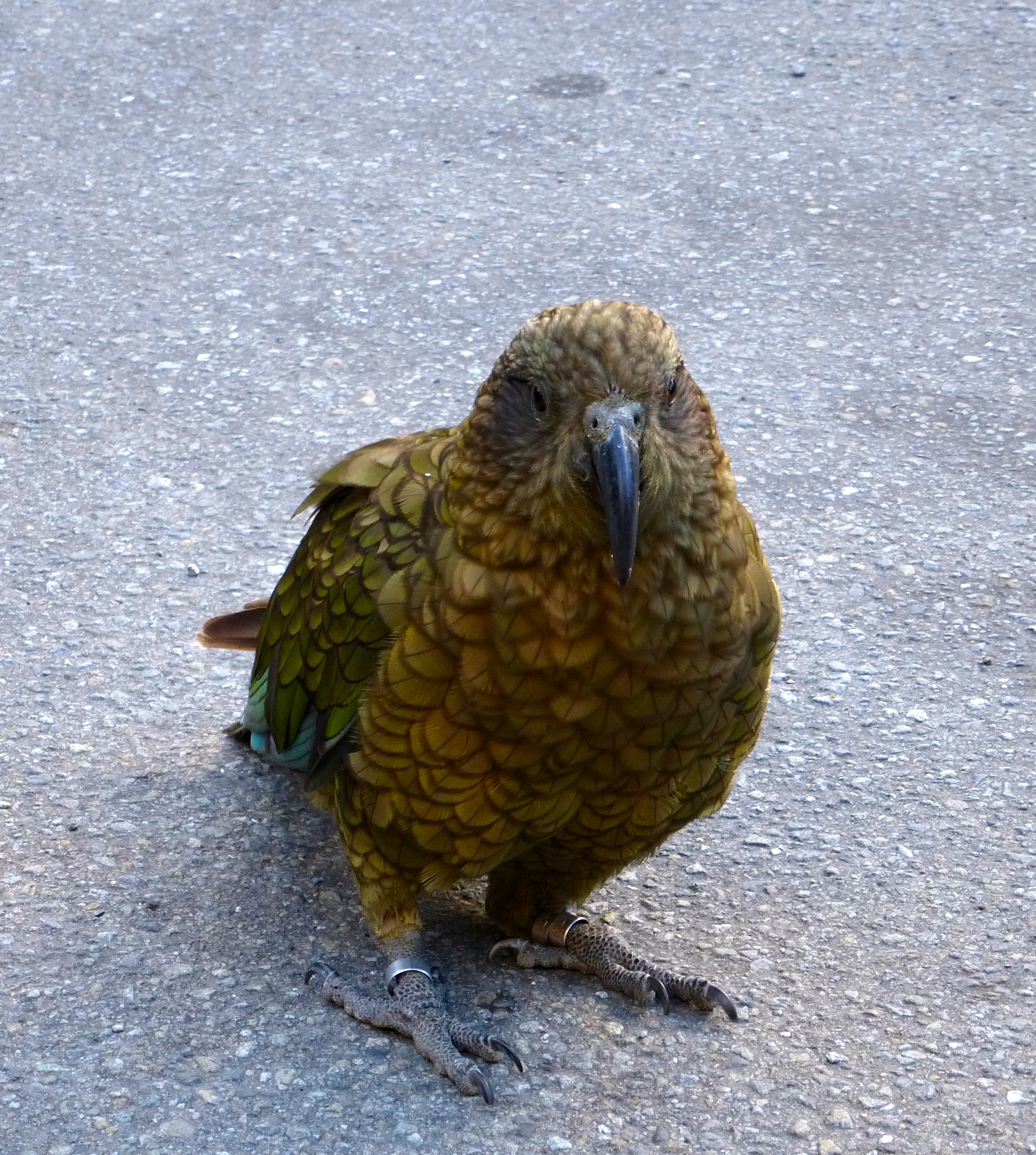 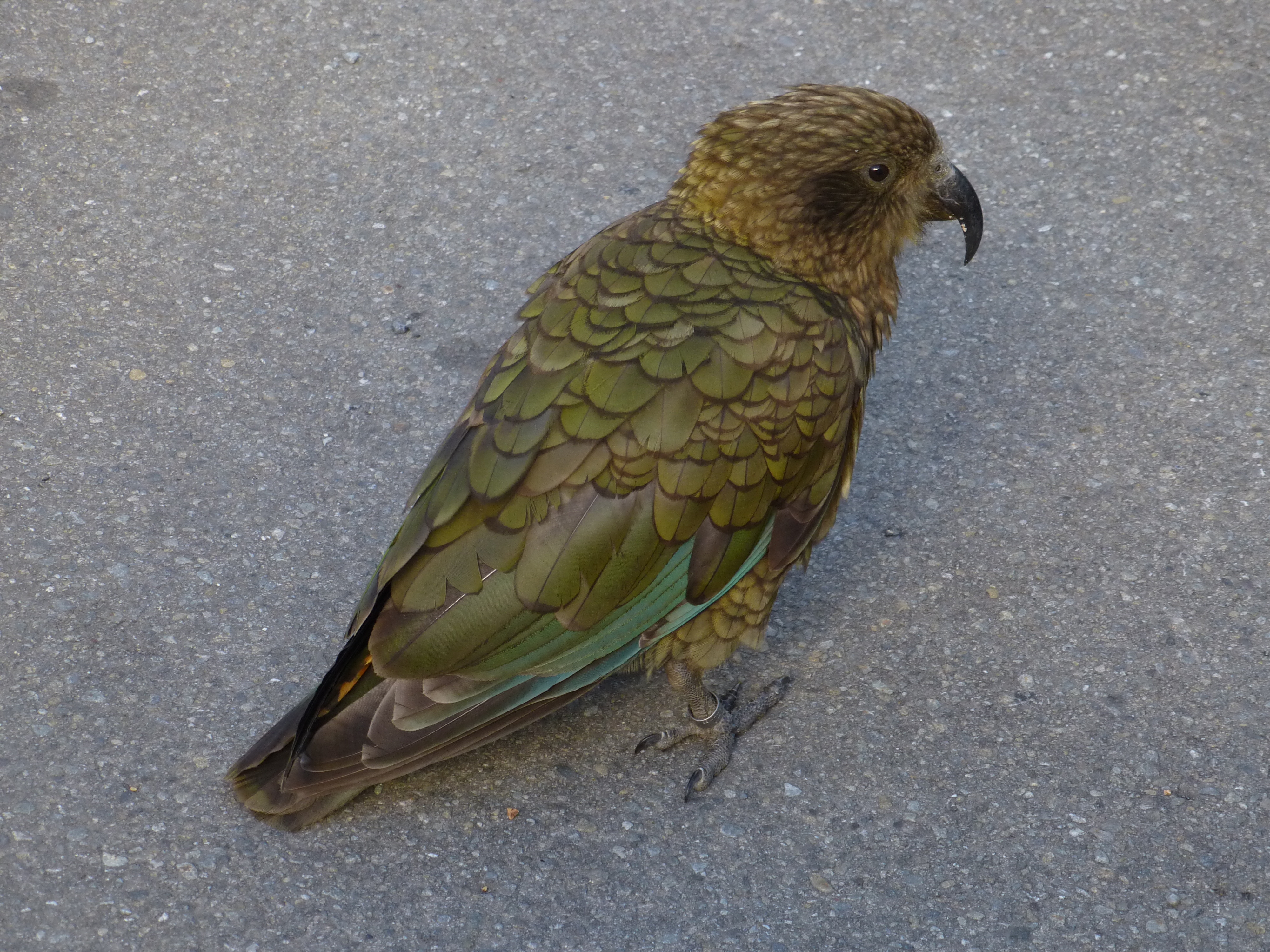 The photo below is a tad out of focus, but it shows the lovely colors of the bird, as well as its small eyes and wicked beak.

I am SO happy I got to see kea, even if I saw only one. One was enough, and it was worth the eight-hour wait.

Many thanks to Mike of West Coast Shuttle for giving me the chance to see this bird. 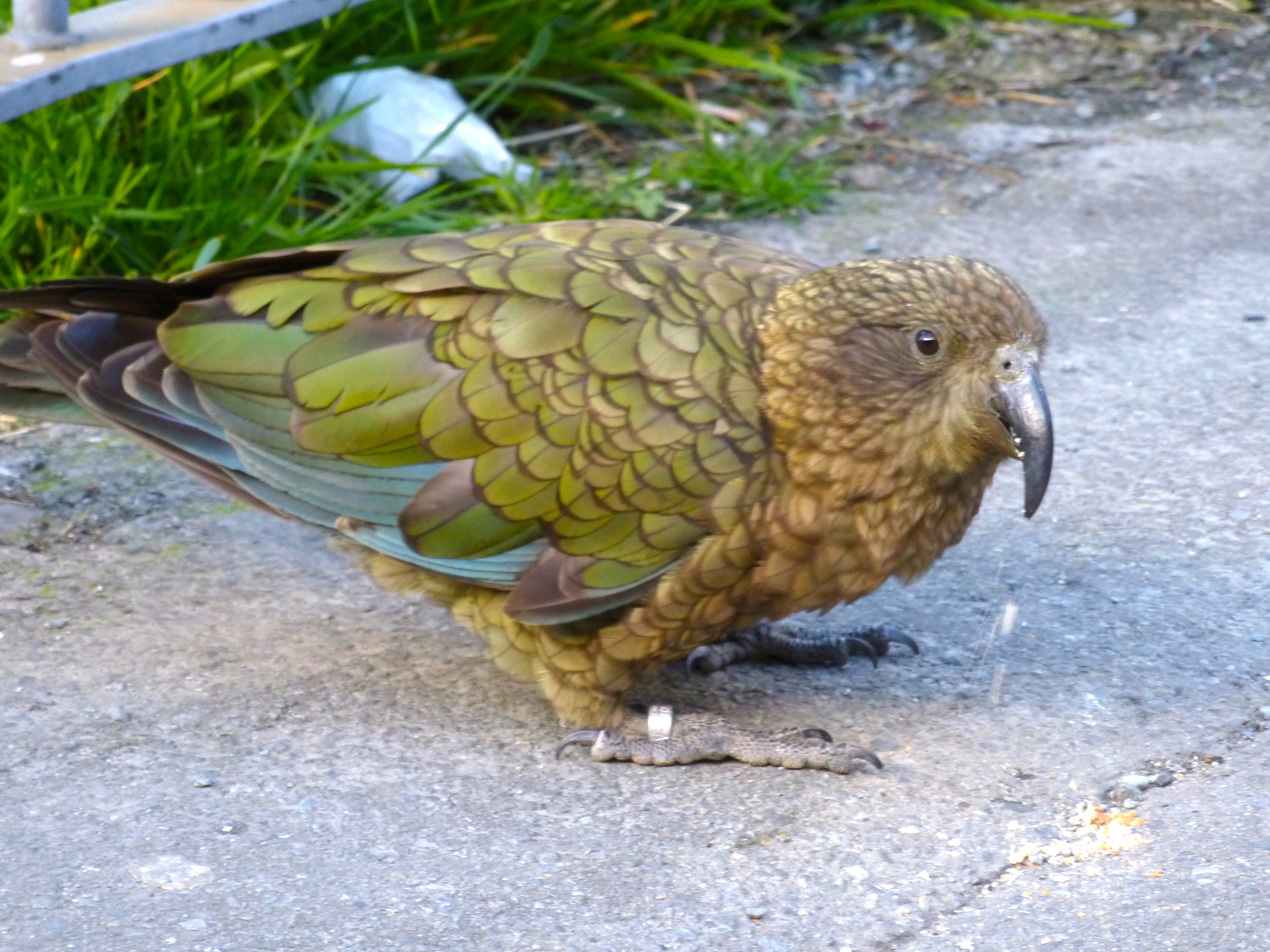 I also met up with another South Island Robin (Petroica australis), which, as one did on the Routeburn Track, followed me down the trail and, when I stopped, jumped onto my feet to tug at my shoelaces. It also made a dive at my jeans, trying to pluck at them. They are splendid little birds with gray coloration, glossy black eyes and beaks, whitish to yellowish breasts, and little stick legs. They are very curious and fearless: 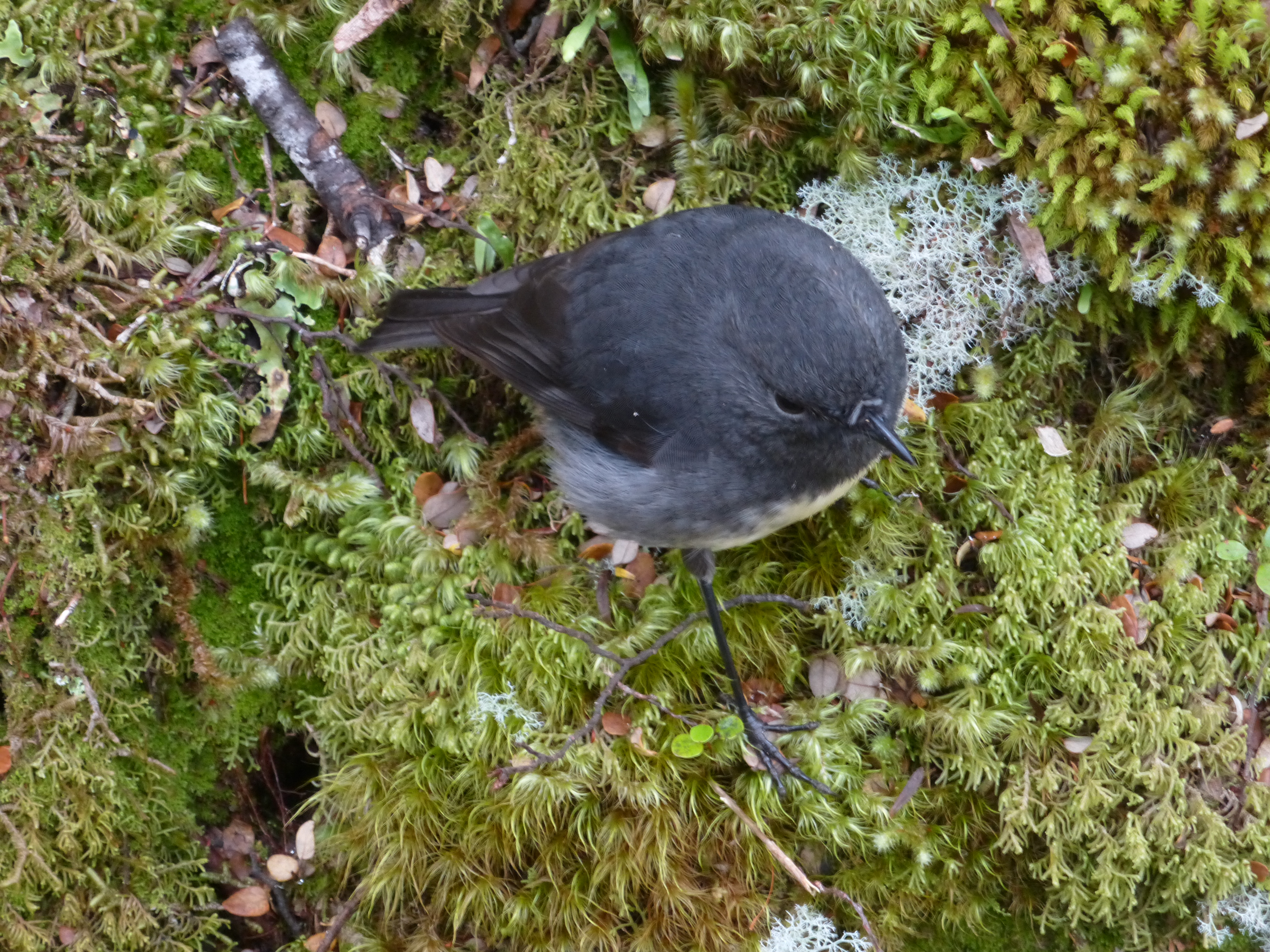 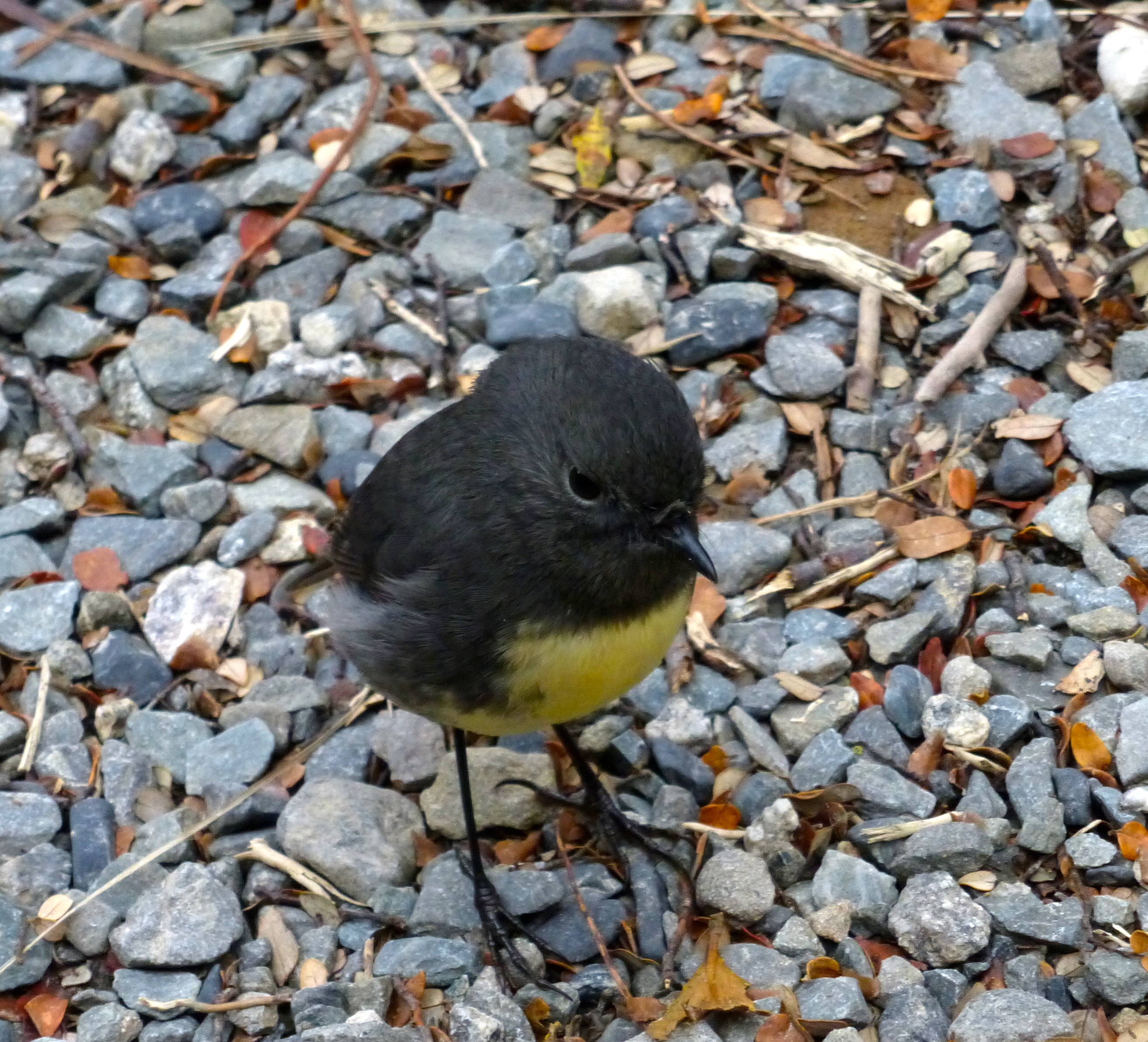 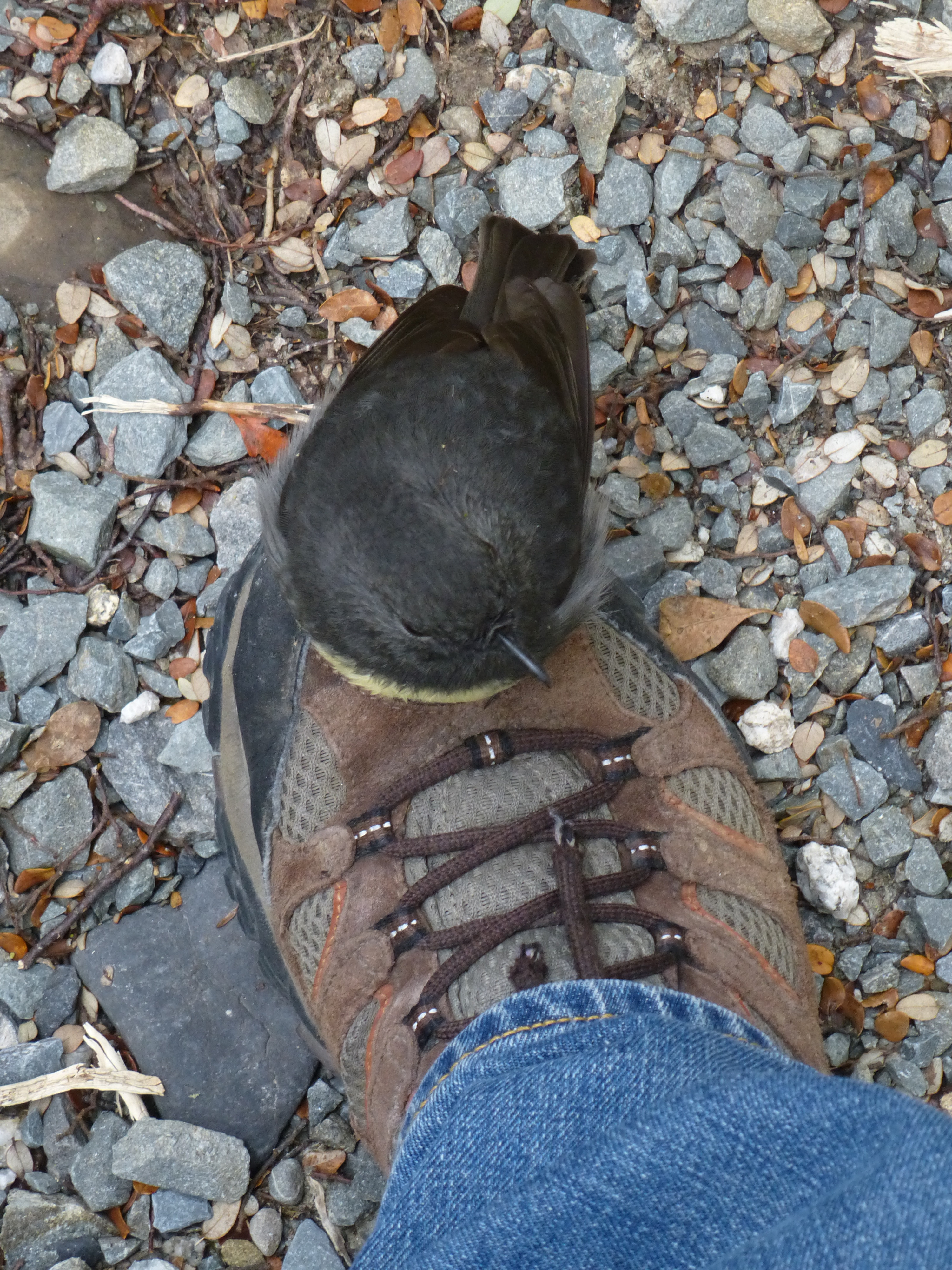 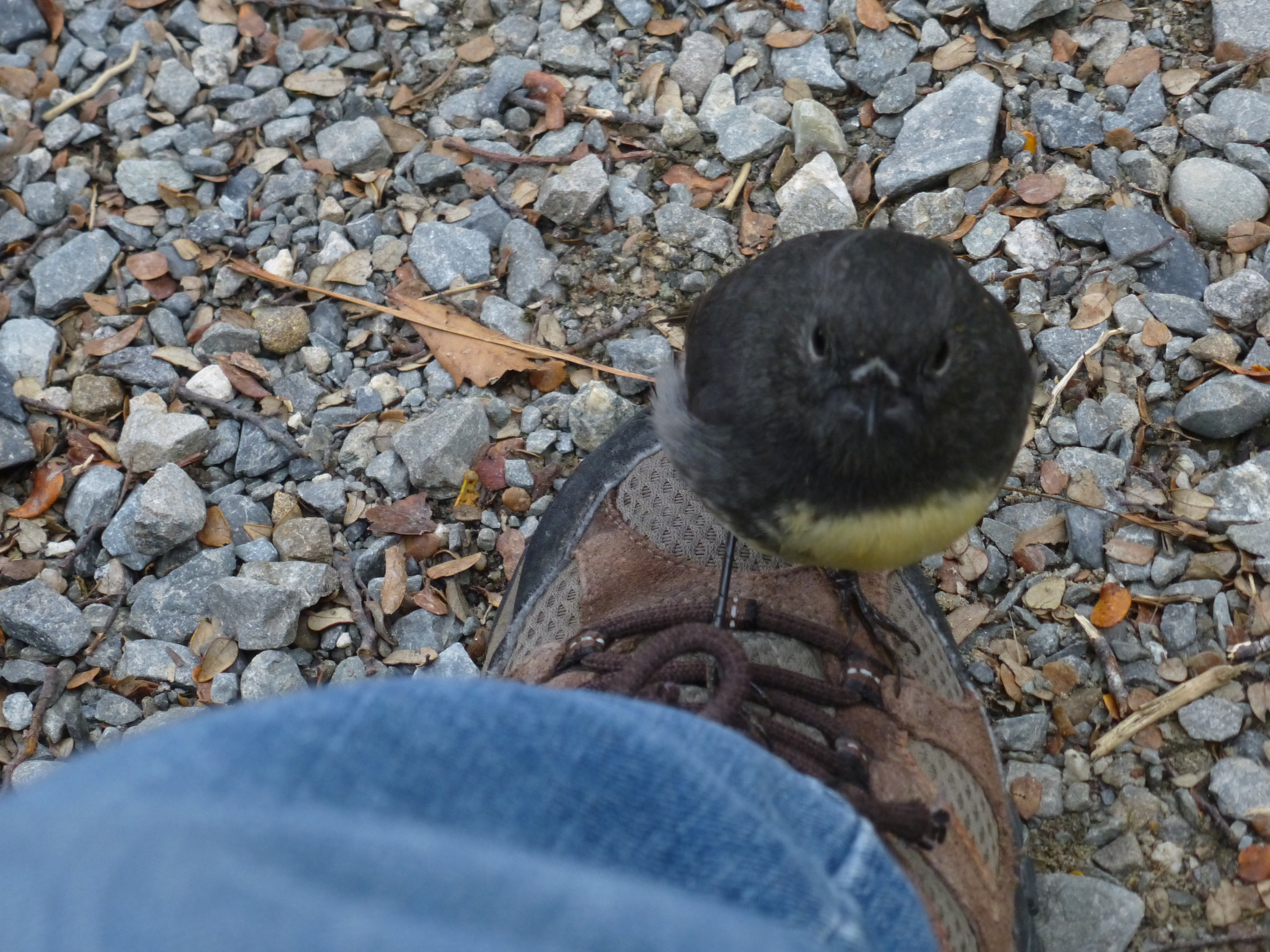 And today (this will be published in the US on Friday), I head to Nelson, delighted that I’ve bagged a kea with my camera.

58 thoughts on “The Great Kea Hunt meets with success”