Yesterday Don MacKay and I were invited to a “sheep station” (the word “ranch” isn’t used here) to tag along with a bunch of American wine buyers visiting New Zealand to sample the local sauvignon blancs and pinots. Don and his wife Karen are long-time friends of the station’s owners, Paul and Muff Newton, and the Newton’s big station, which goes way up into the hills, is called Kaituna Ridges. While the link says it has 5000 Romney sheep, it’s more like 8000 after lambing season. There are about three sheep for every person in New Zealand (about 4 million people).

The wine buyers were given a visit to the station as lagniappe (and, I suppose, to give them a taste of local culture in hopes that they’d buy more wine!), but we were allowed to see the demonstrations too and even have tea and scones. It was two hours or so of great fun.

Here’s part of the station. Paul and Muff’s property, and the areas grazed by their Romney sheep, go way up into the hills. The anmals roam freely, eating the grass, and are collected by using a combination of a four-wheeled motorcycle and a passel of working sheepdogs. 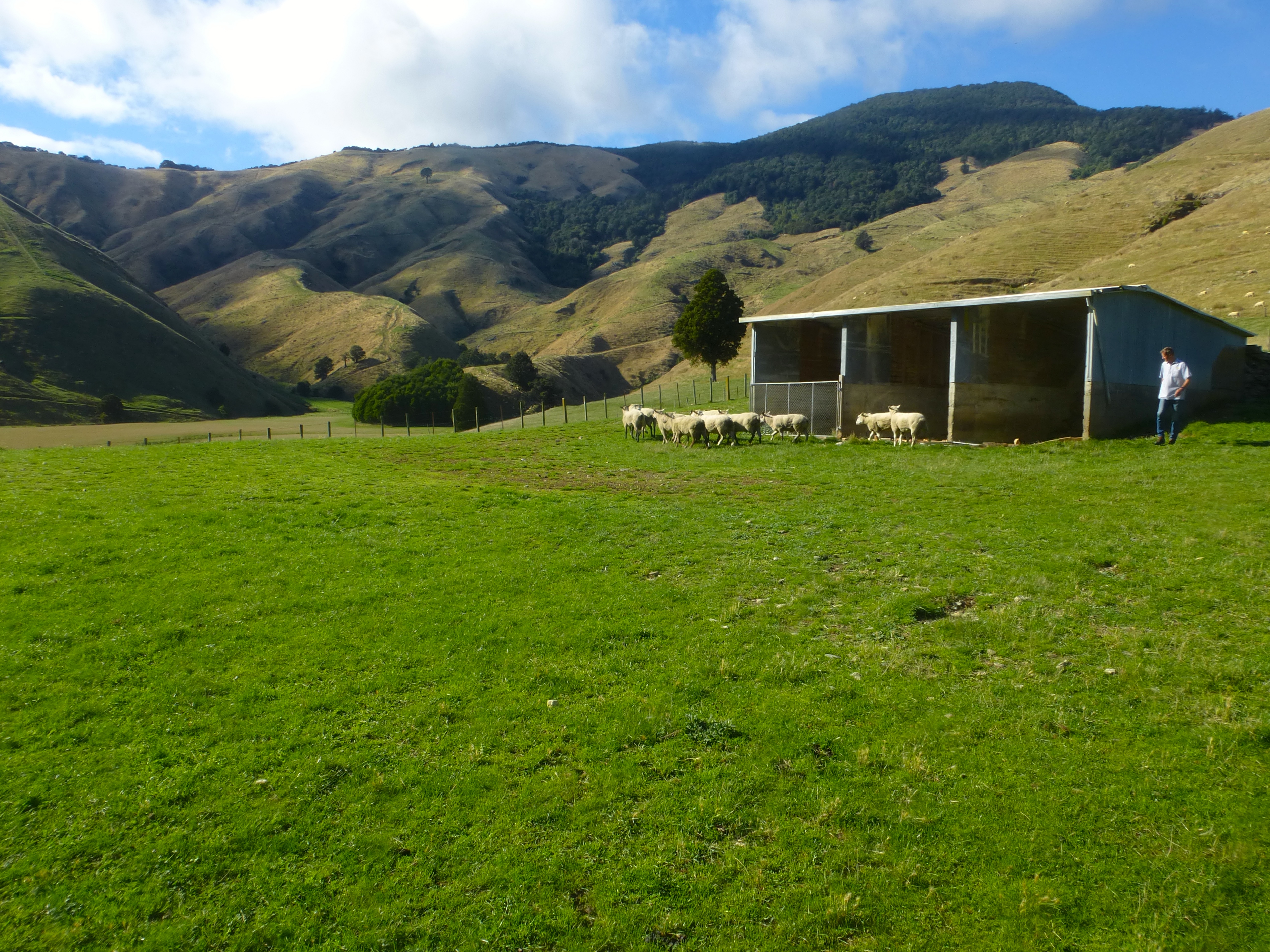 It was warm yesterday, and sheep congregated in the shade: 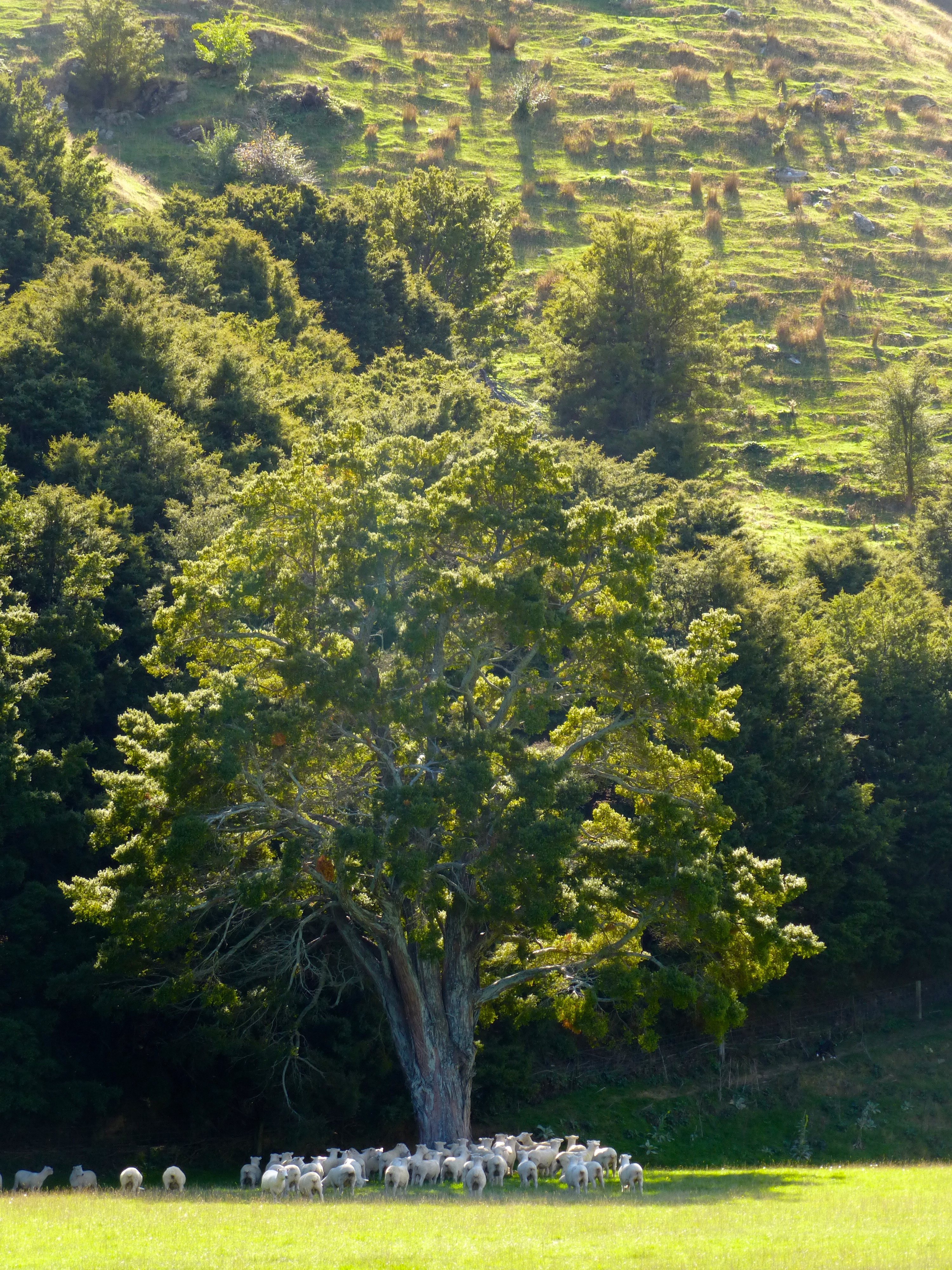 There are about a half-dozen working dogs on the station. The black and white ones are the New Zealand equivalent of border collies: smart, active, and good at following whistled commands to round up sheep. Their legs are longer than border collies as they have to run long distances uphill, and have been bred for that. Care is taken not to overwork the dogs.

There are also a couple of larger brown dogs that not only chase the sheep, but are trained to bark, also on whistle command. The barking scares the bejeesus out of the sheep and make them run fast to the station or paddock. The combination of the barkers and “round-up” dogs make bringing the sheep in very efficient. And it has to be when you have 8,000 sheep! 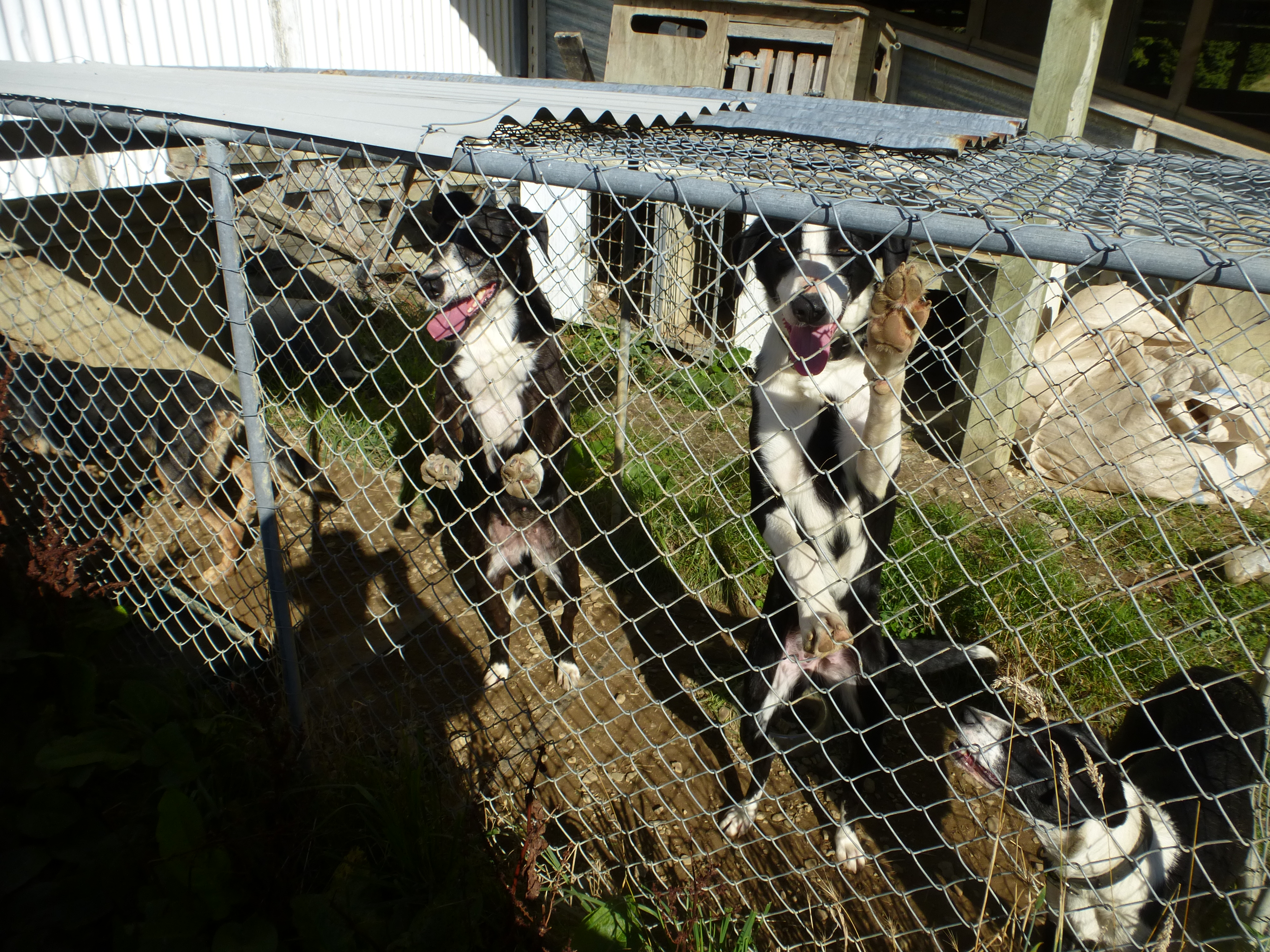 Paul with one of his dogs, which he secured between his legs. 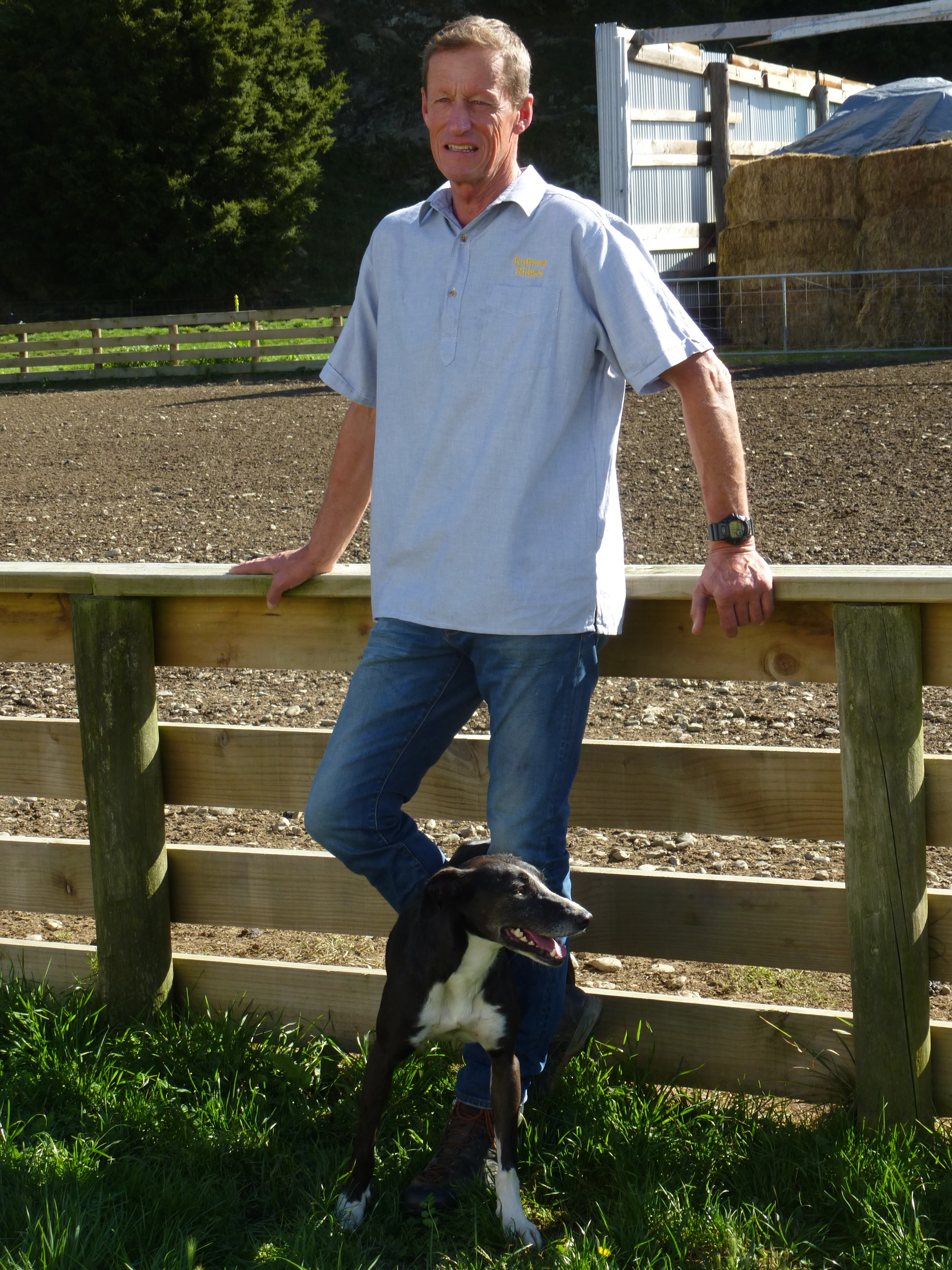 Muff did a swell demonstration, using a small plastic whistle, whose sound carries great distances, to call in a bunch of sheep. Someone asked her how many calls she could make, and she had no idea, but they can make a dog do anything. Further, the calls are dog-specific: they can be issuing commands to three dogs at a time, all working a group of sheep, and each dog knows which command is for him. I have no idea how this is done, but it does work, as you can see: 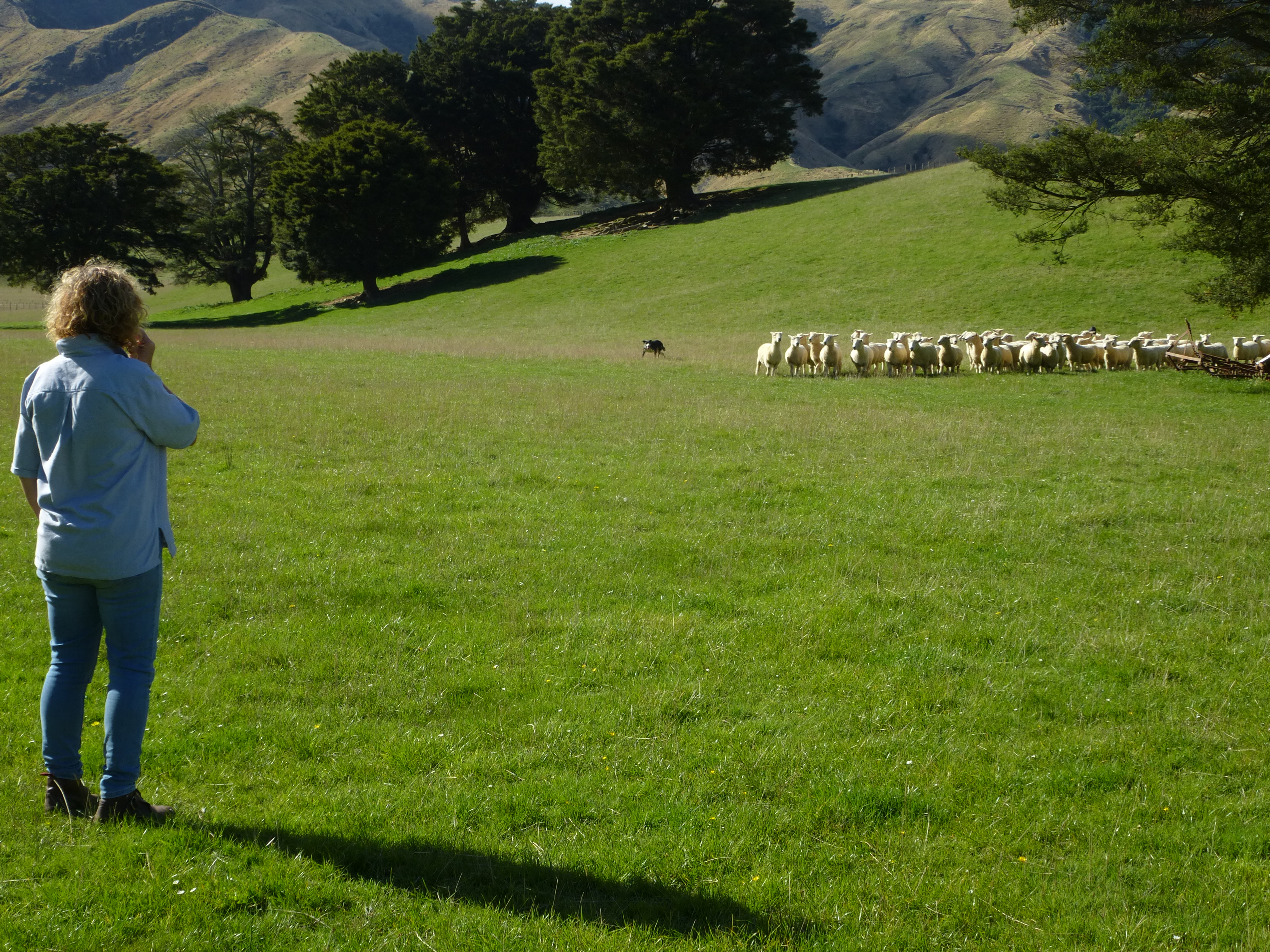 The sheep were collected from a great distance and brought to us in a compact pack. The whistle tells each dog whether to run round the flock clockwise or counterclockwise. This is an amazing demonstration of human/animal mutualism, though what the dogs get out of it I’m not sure! (It’s exercising their genetic imperative.) It’s impressive to watch how a dog can corral a lone sheep that escapes the pack and bring it back to the group. 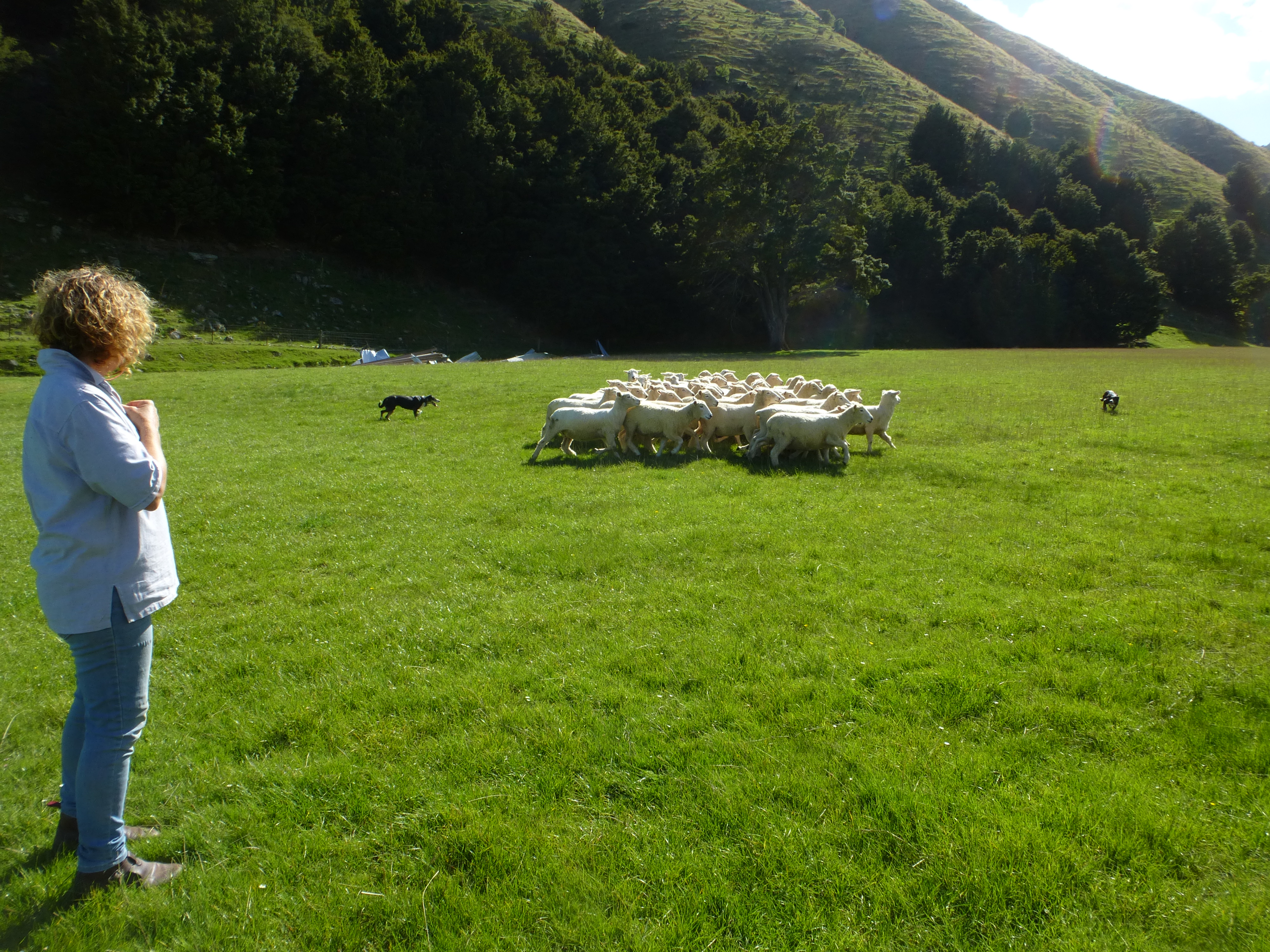 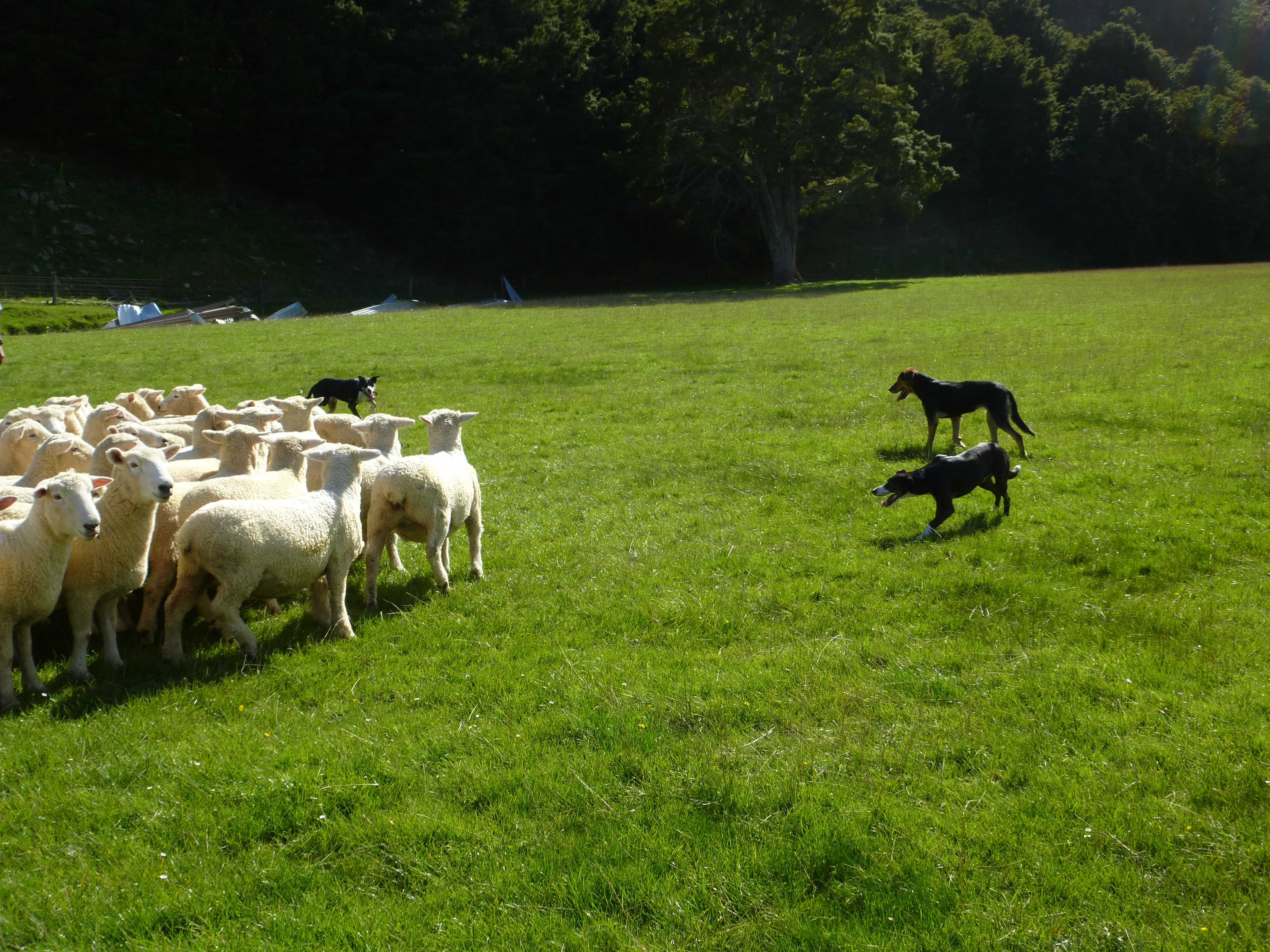 We were then treated to a demonstration of sheep shearing by Paul, who began life as a shearer.  Each shearer, and they hire six during shearing season, brings his own moccasins (to avoid injuring the sheep, as you hold them with your feet), as well as his own shearing head to cleave the wool. 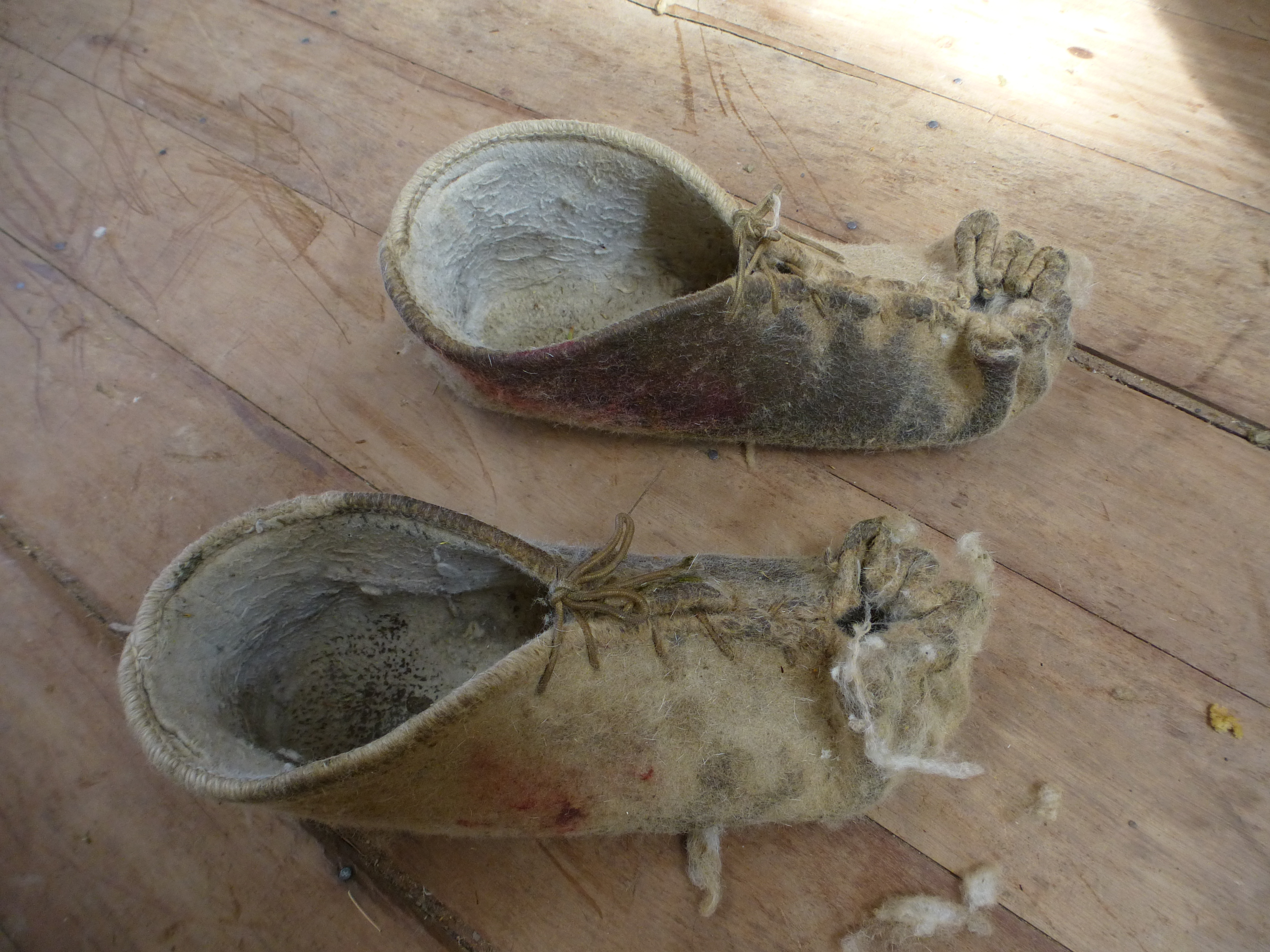 The sheep come in through a door one at a time and, I must say, are handled rather roughly. Time is of the essence as there are so many sheep. A good shearer can do a sheep in about 2.5 minutes, but there are contests and records, which includes over 600 sheep shorn by one man in 8 hours, or about one sheep every 48 seconds! It’s hard work, and professional shearers go from station to station, moving between New Zealand and Australia. 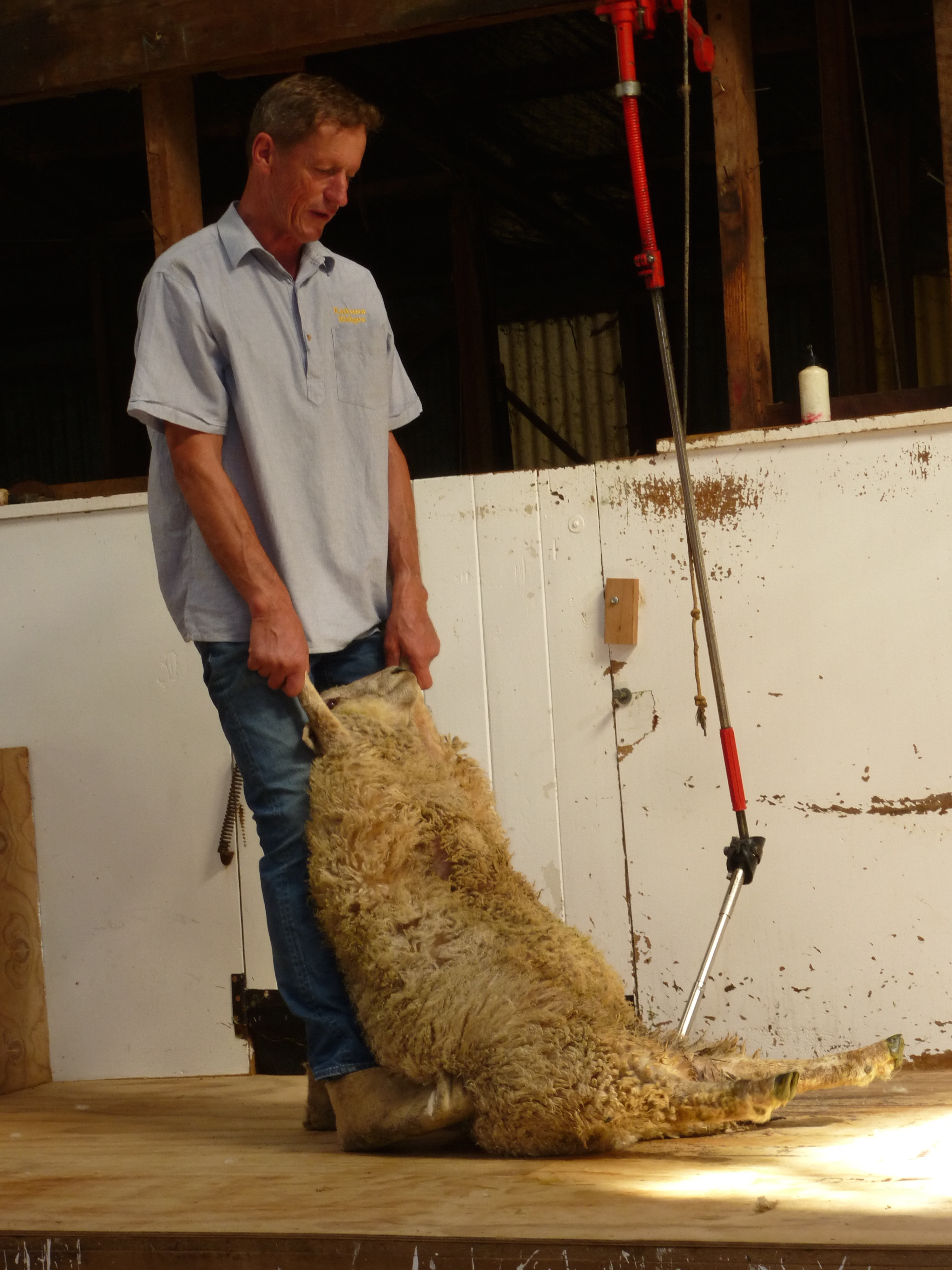 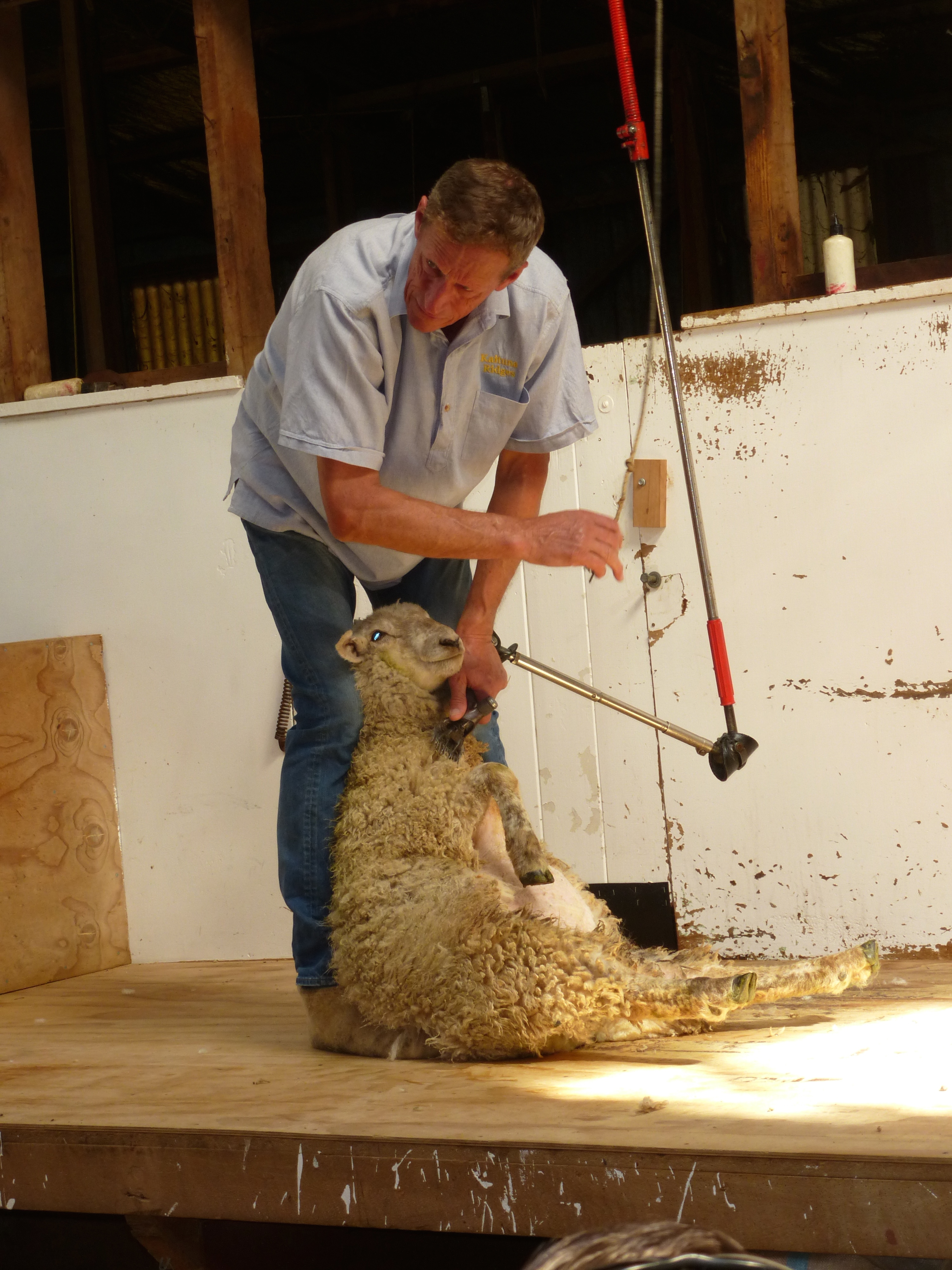 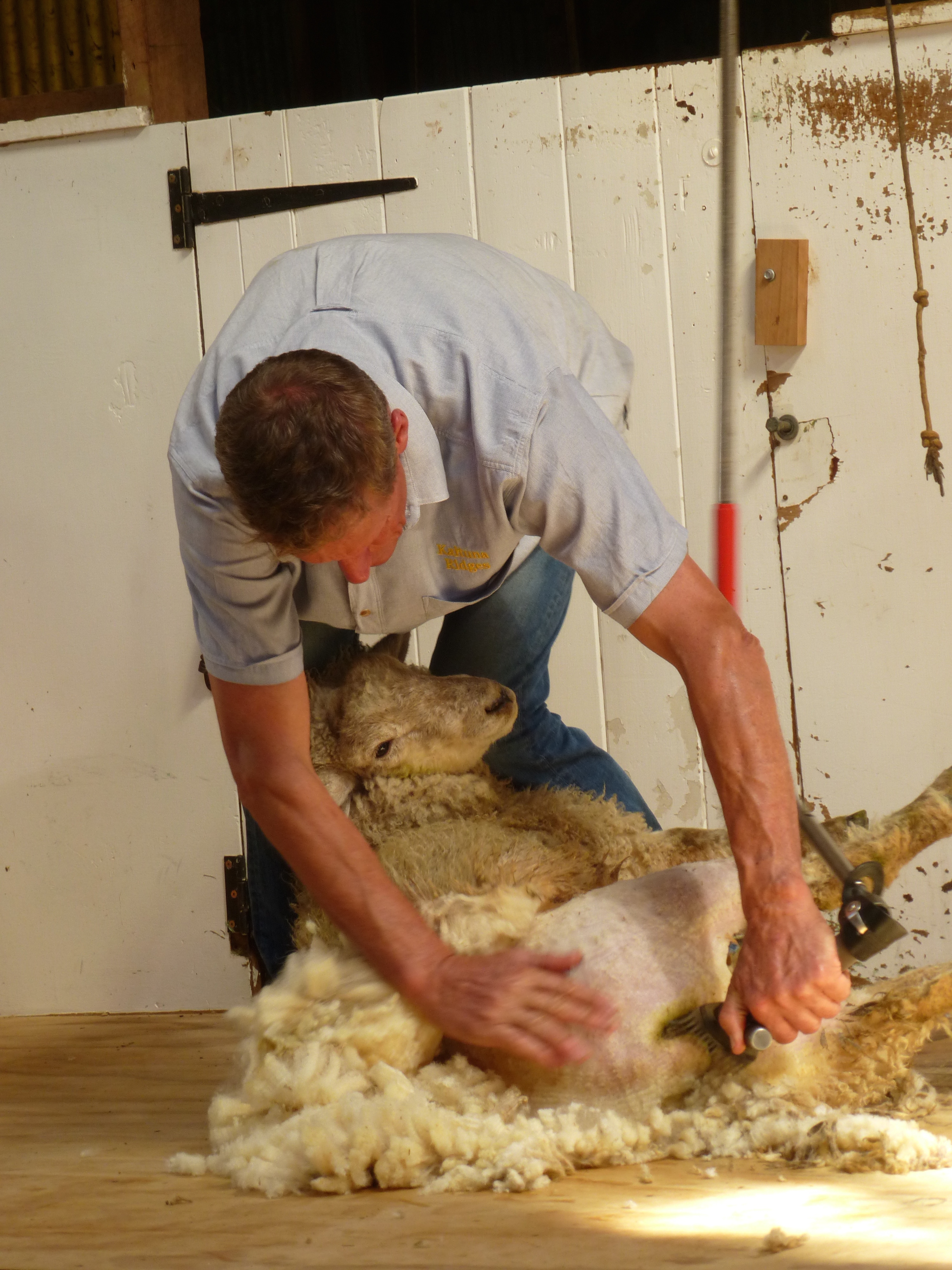 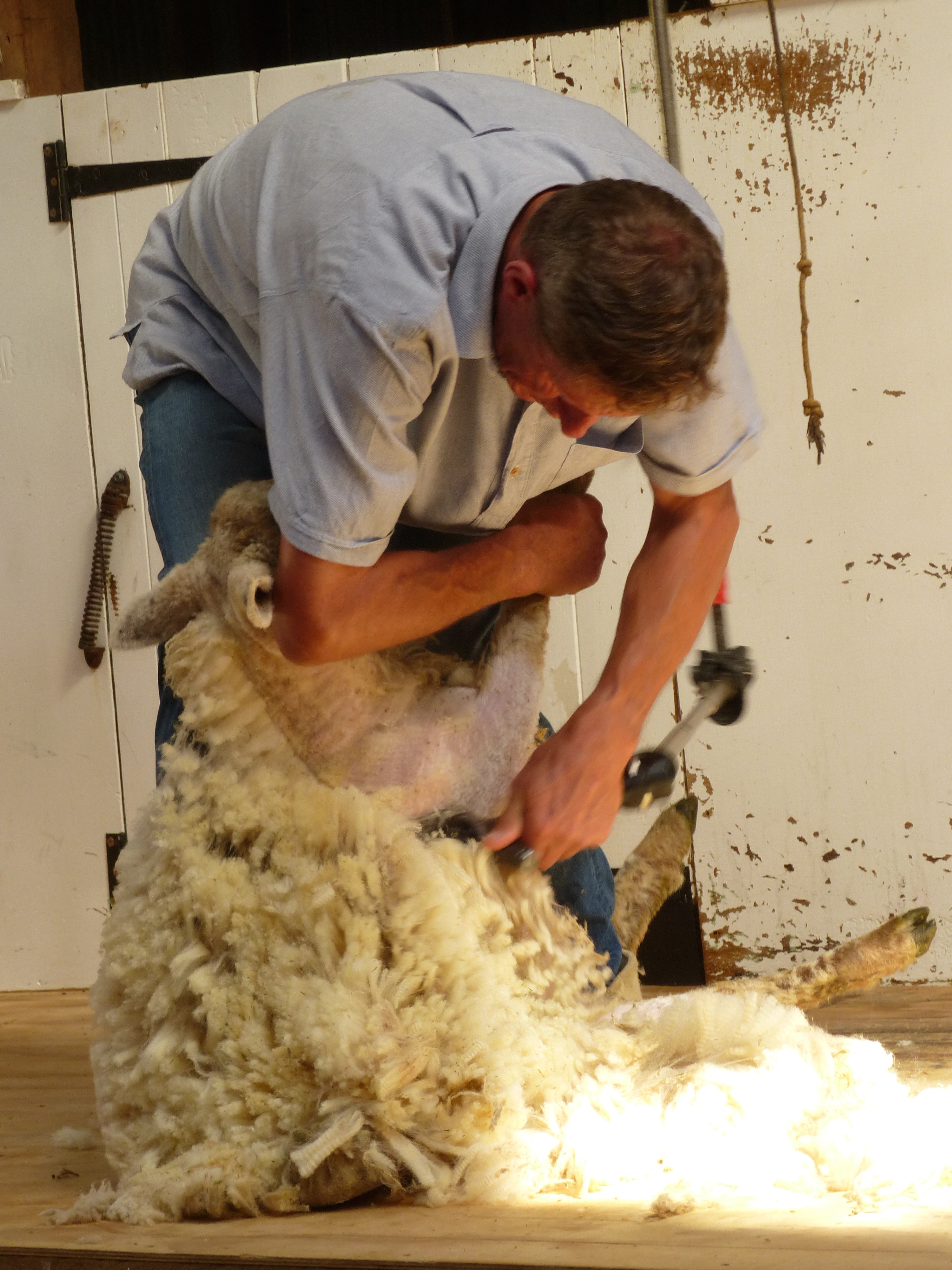 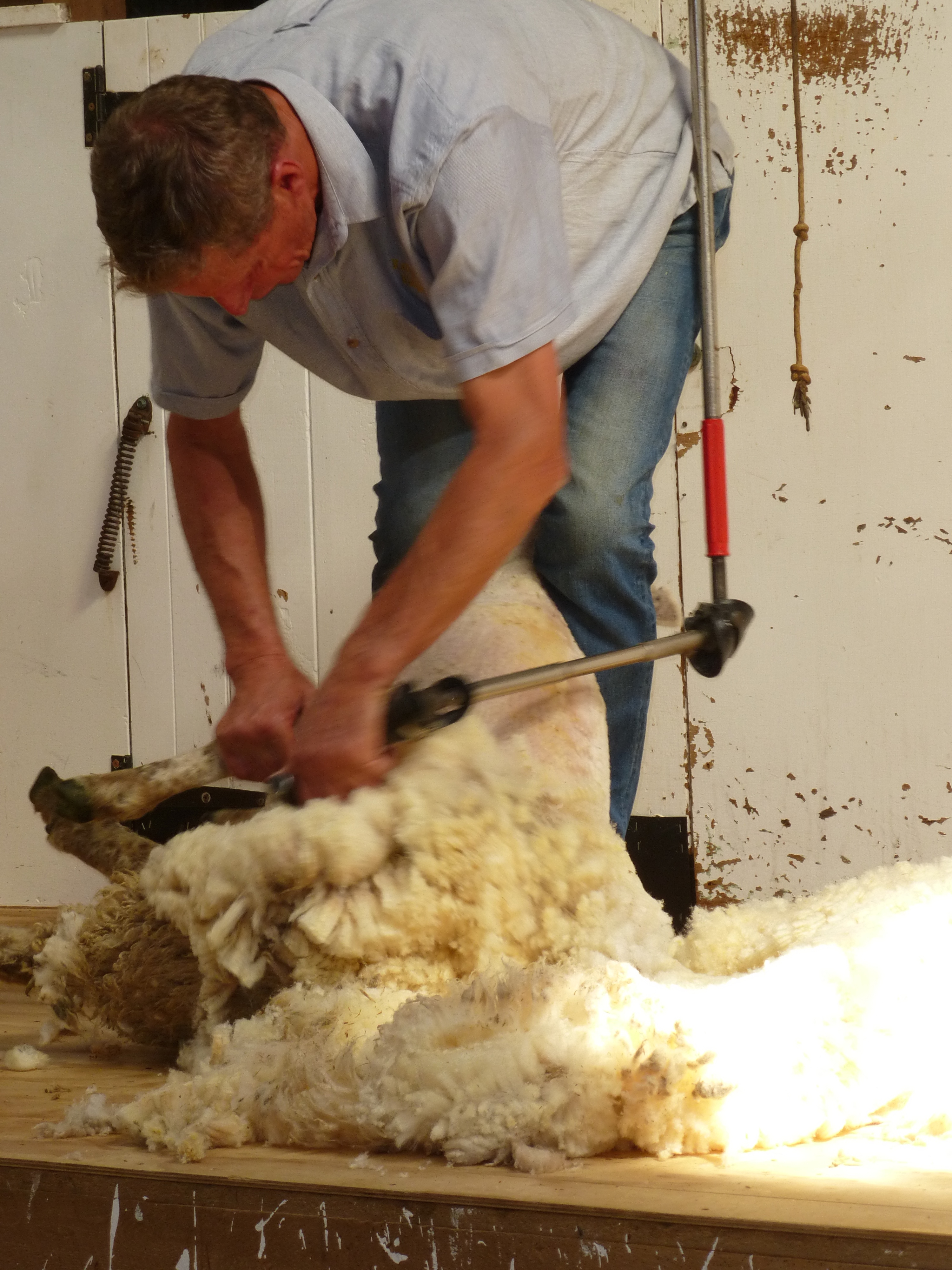 Done! A denuded sheep (a thin layer of wool is left): 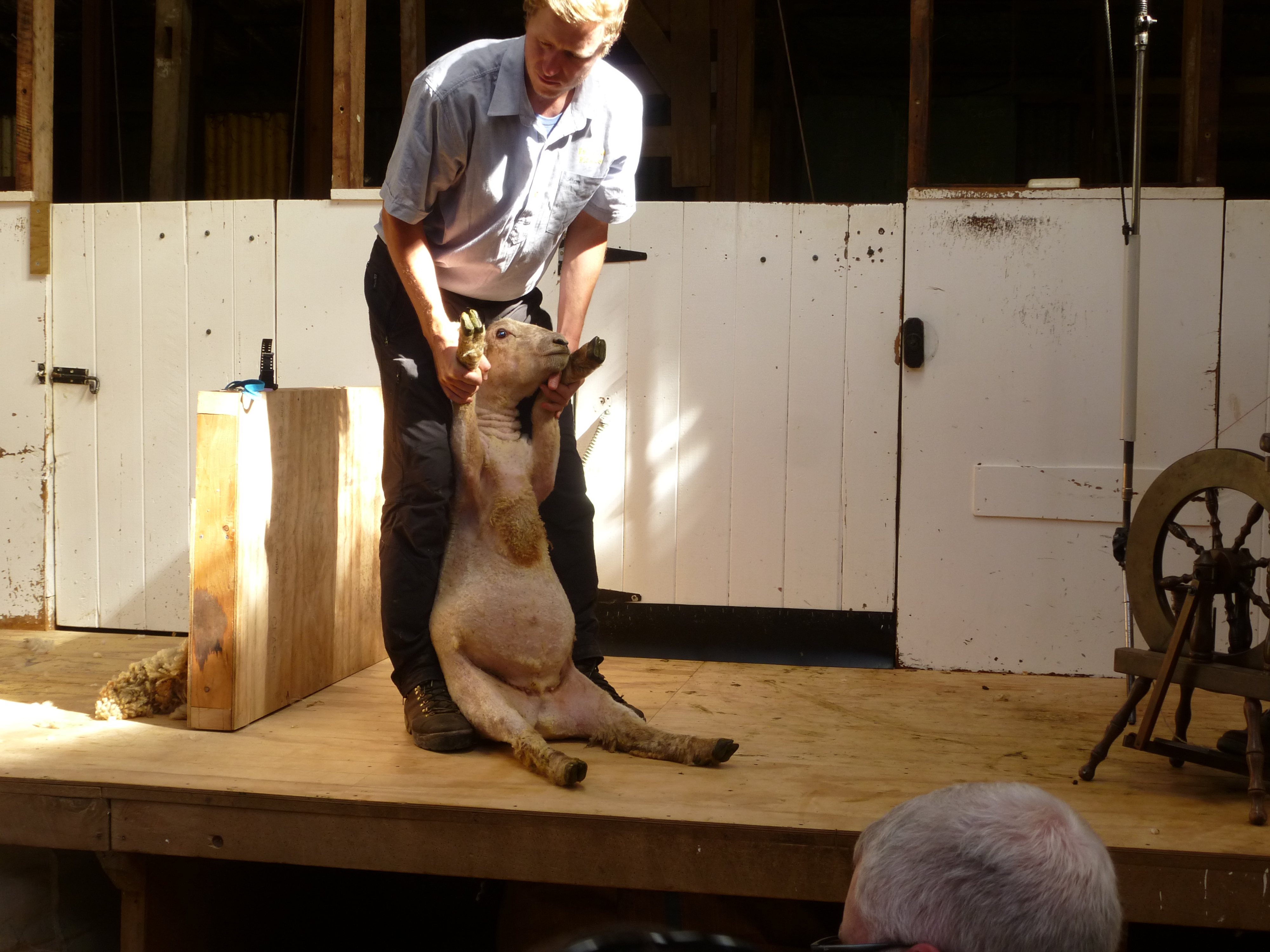 The wool from one sheep: 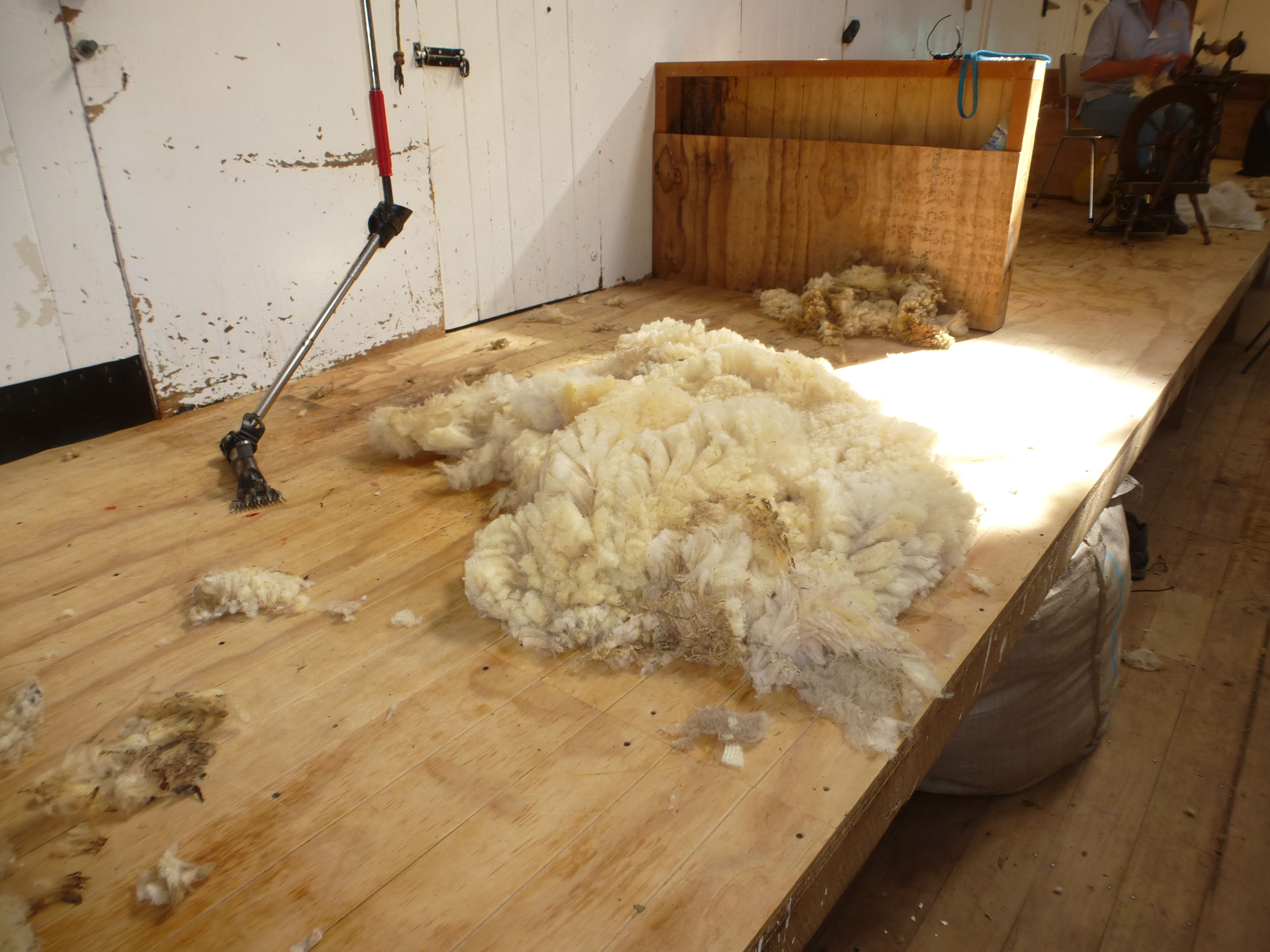 A close-up: the wool from these sheep is curly, forming little spirals: 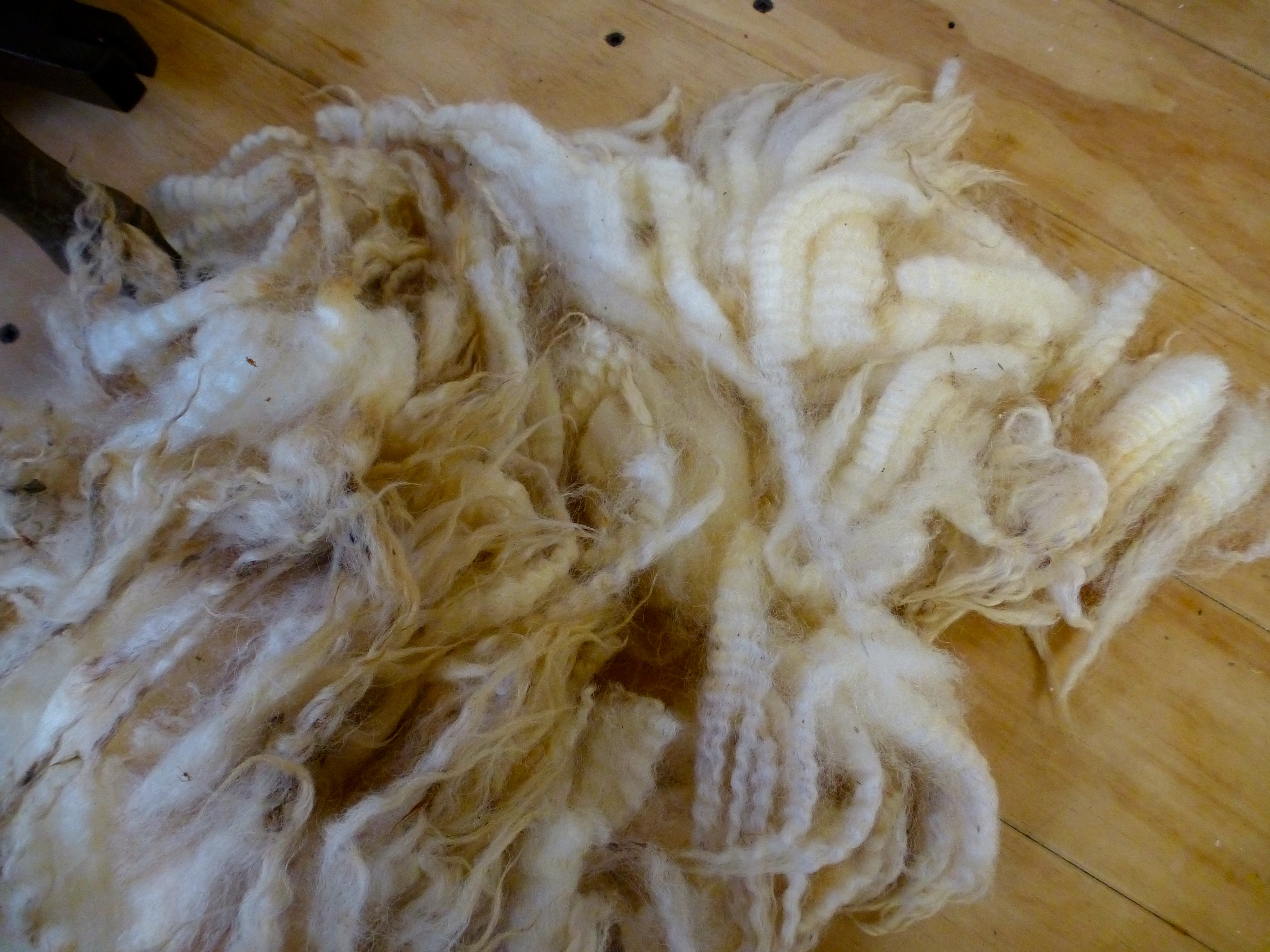 Muff spins the wool into thread and then knits it into lovely caps and scarves. Sometimes she makes a thread of wool mixed with possum fur, which makes for a very soft fabric. 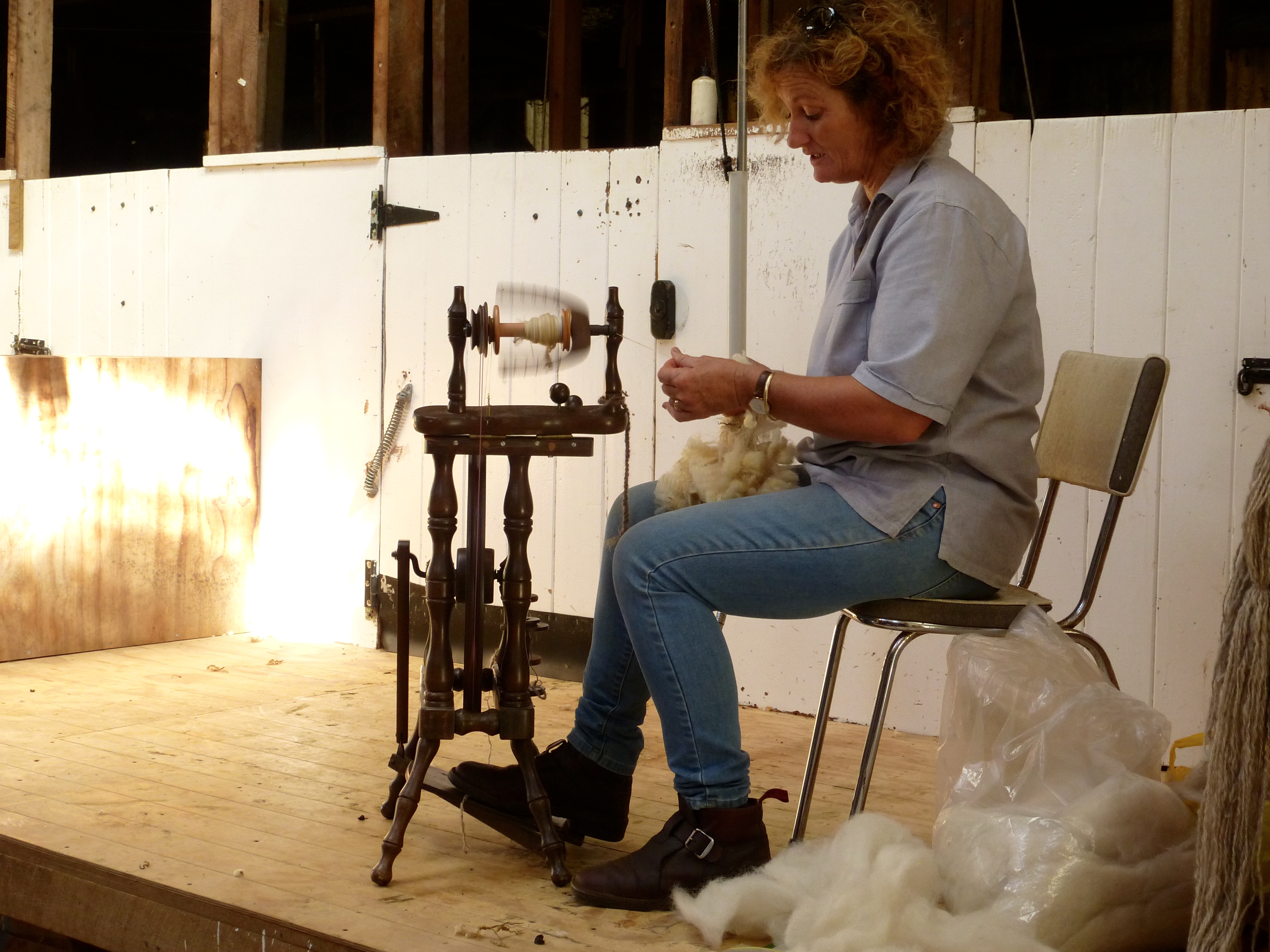 Some sheep, like Merinos, which have very fine wool, are shorn with shears. Here are instructions for taking care of your shears: 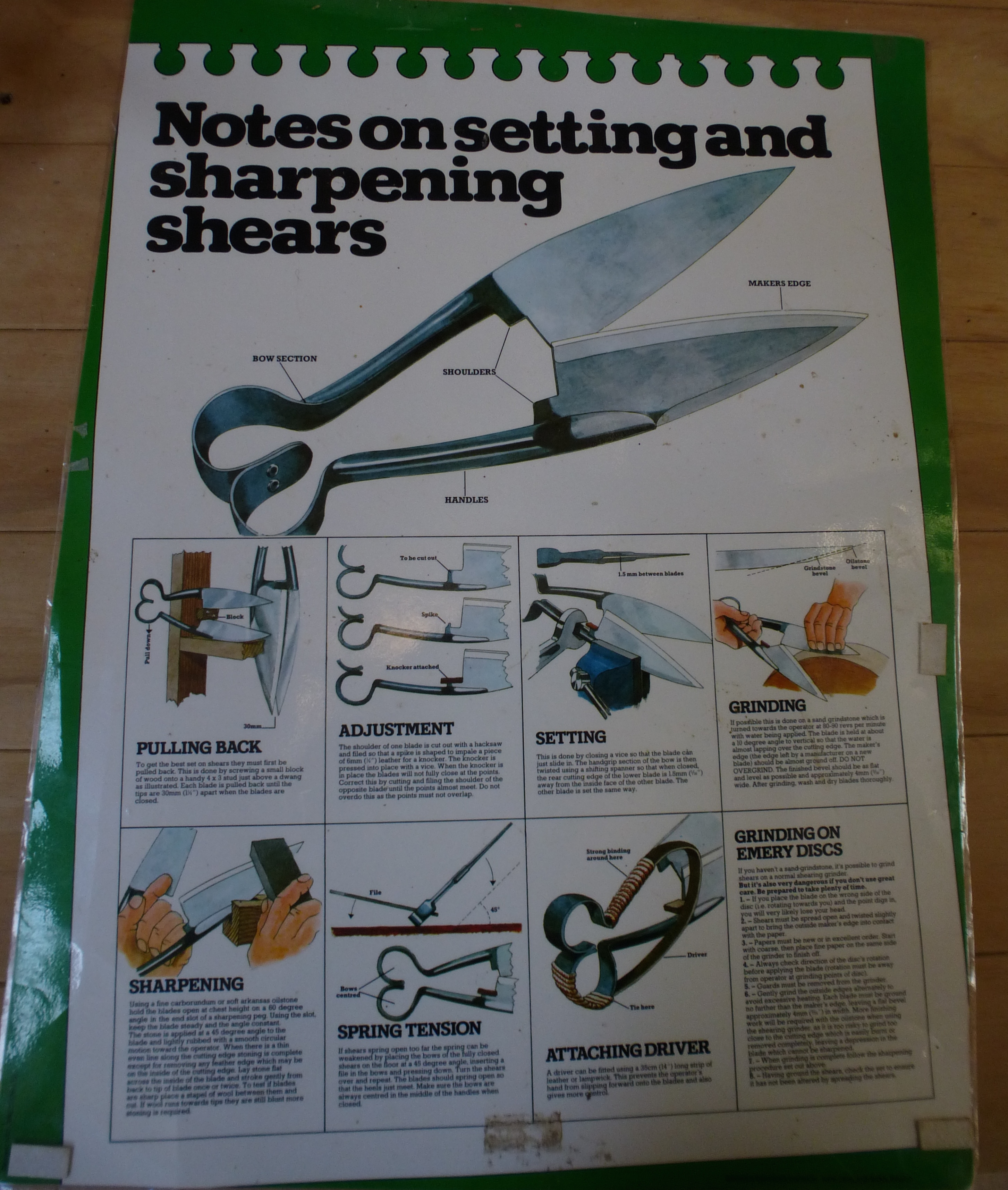 Havelock, the nearest large town to the MacKay’s house, is famous as the Green Mussel Capital of the WORLD. New Zealand green-lipped mussels (Perna canicula) are farmed in the nearby bays but processed in Havelock. The local tourist office has three friendly green mussels in front. ‘

Green-lipped mussels are large (not as large as the ones below!) and delicious. 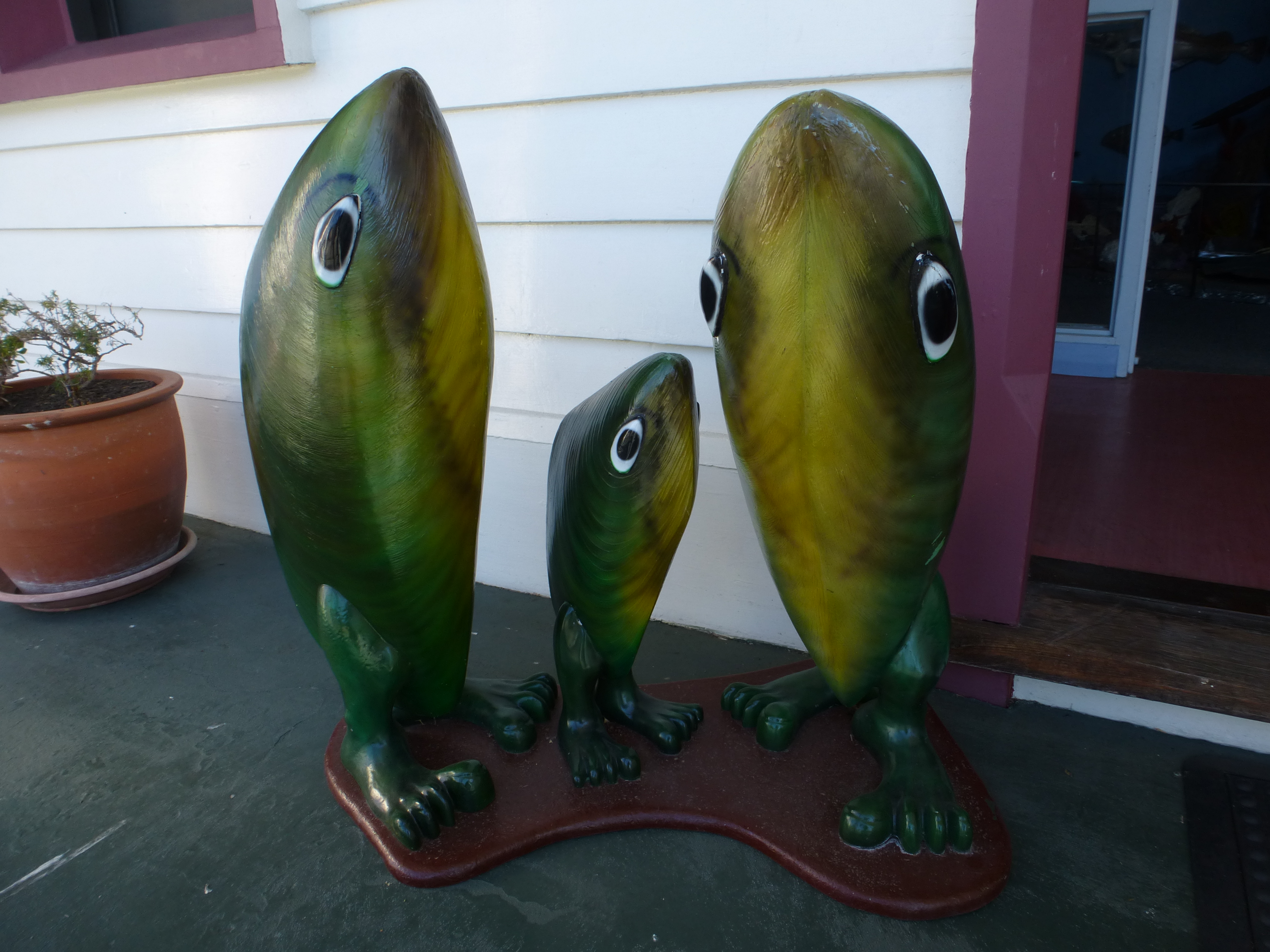 Here I am in front of the town sign: 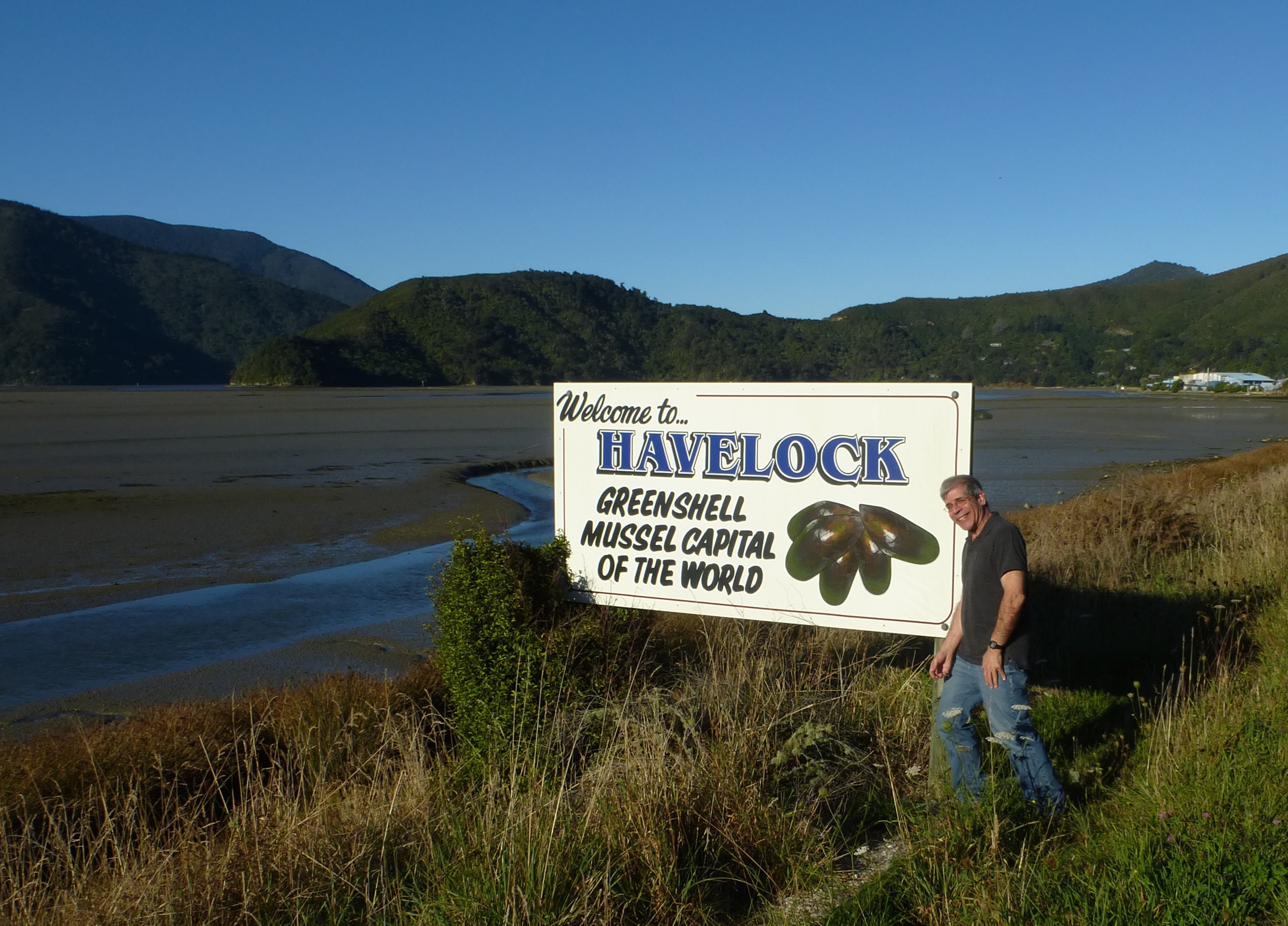 We went out for a mussel dinner on Tuesday night. This is the best place to get them, and also has a good selection of local craft beer. Here are Karen and Don, with all of us ready to tuck in: 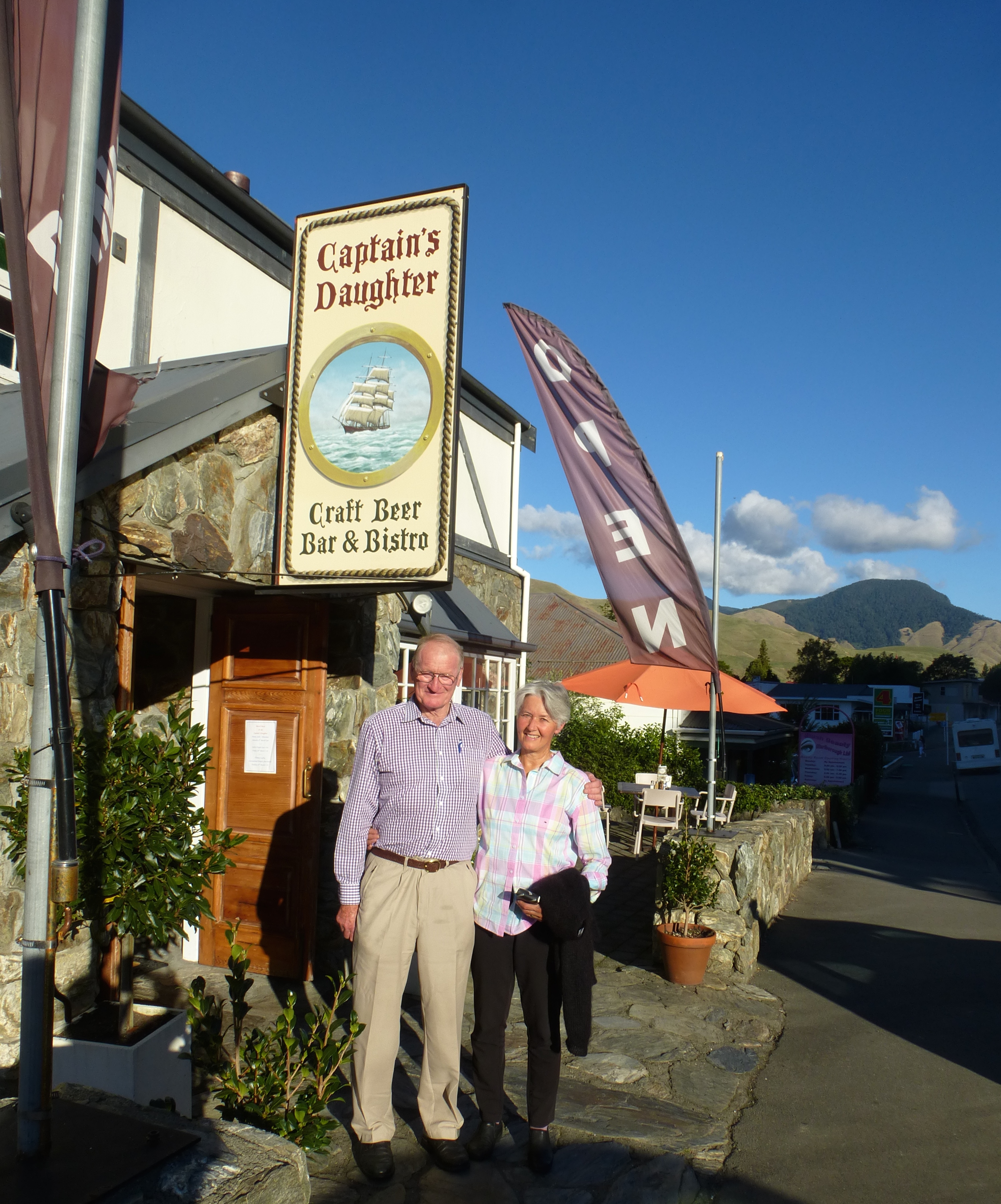 We started with a dozen fancy Bluff oysters, just coming into season. 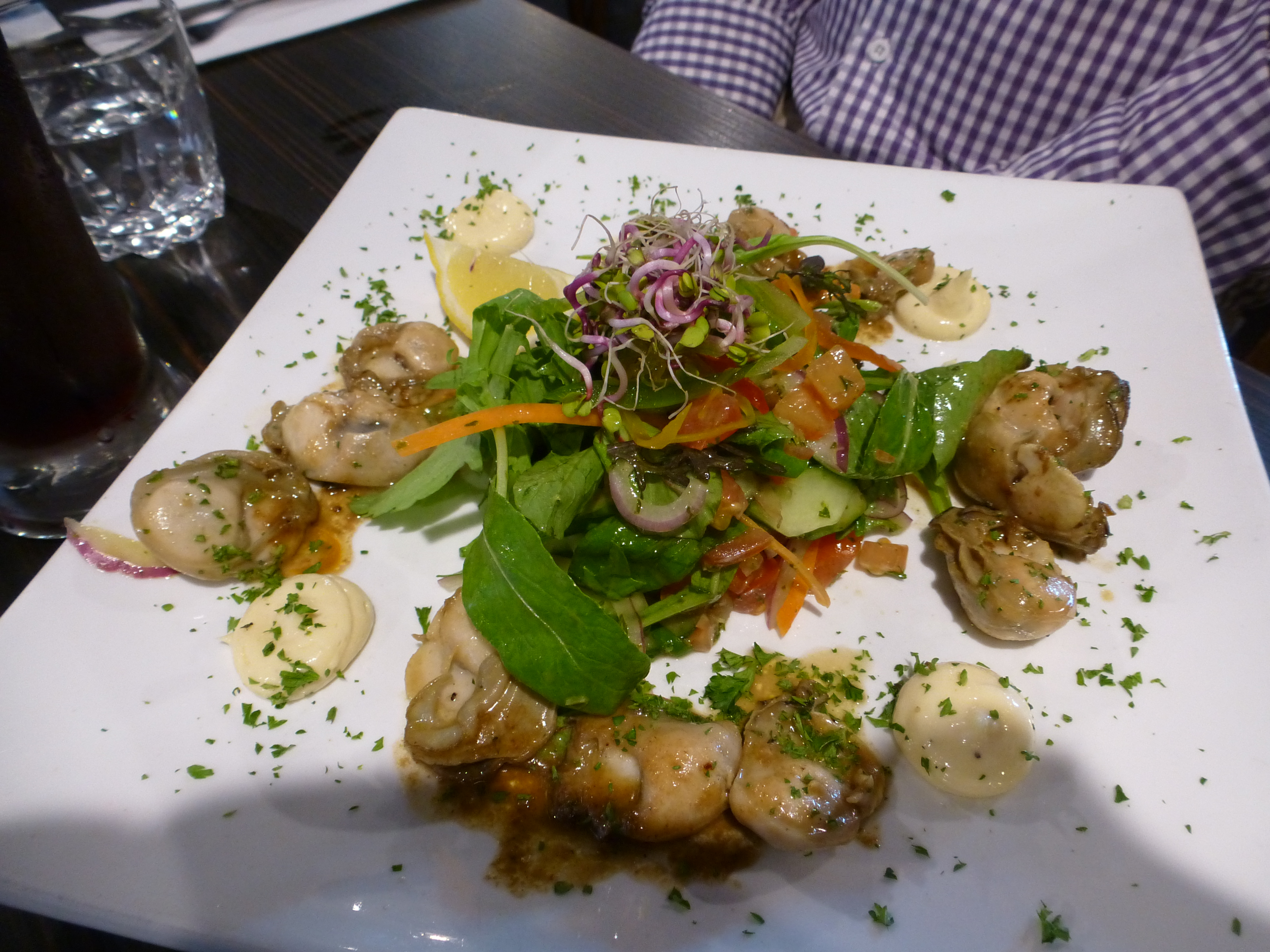 Don had a dozen slightly broiled mussels with four different toppings. See how large they are? 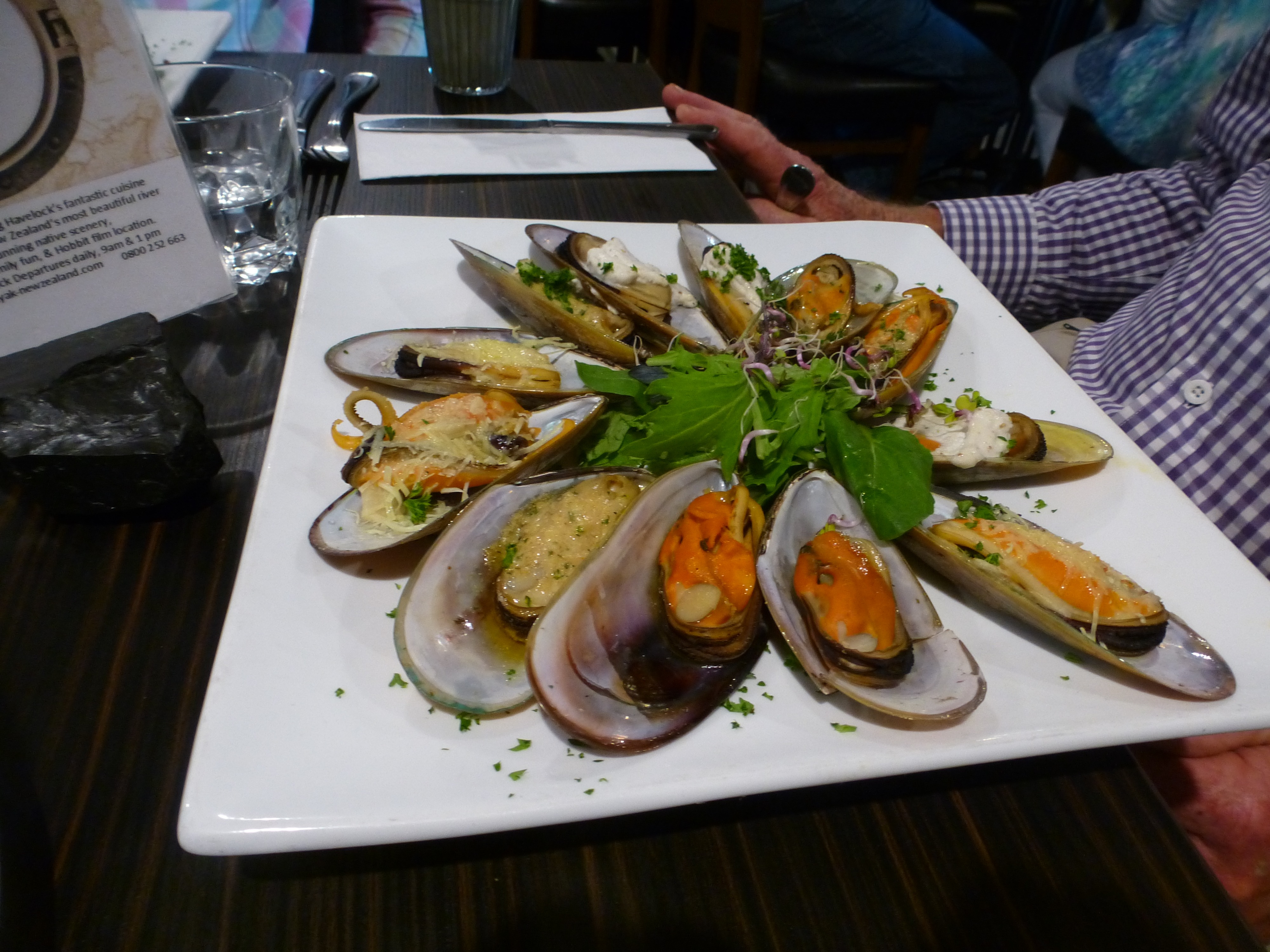 Here’s my dinner: a dozen green-lips steamed with wine and butter, served with fries, garlic mayo, and a good brew. They were terrific, and a dozen were enough for dinner after the oyster starter. The green lips are clearly visible. 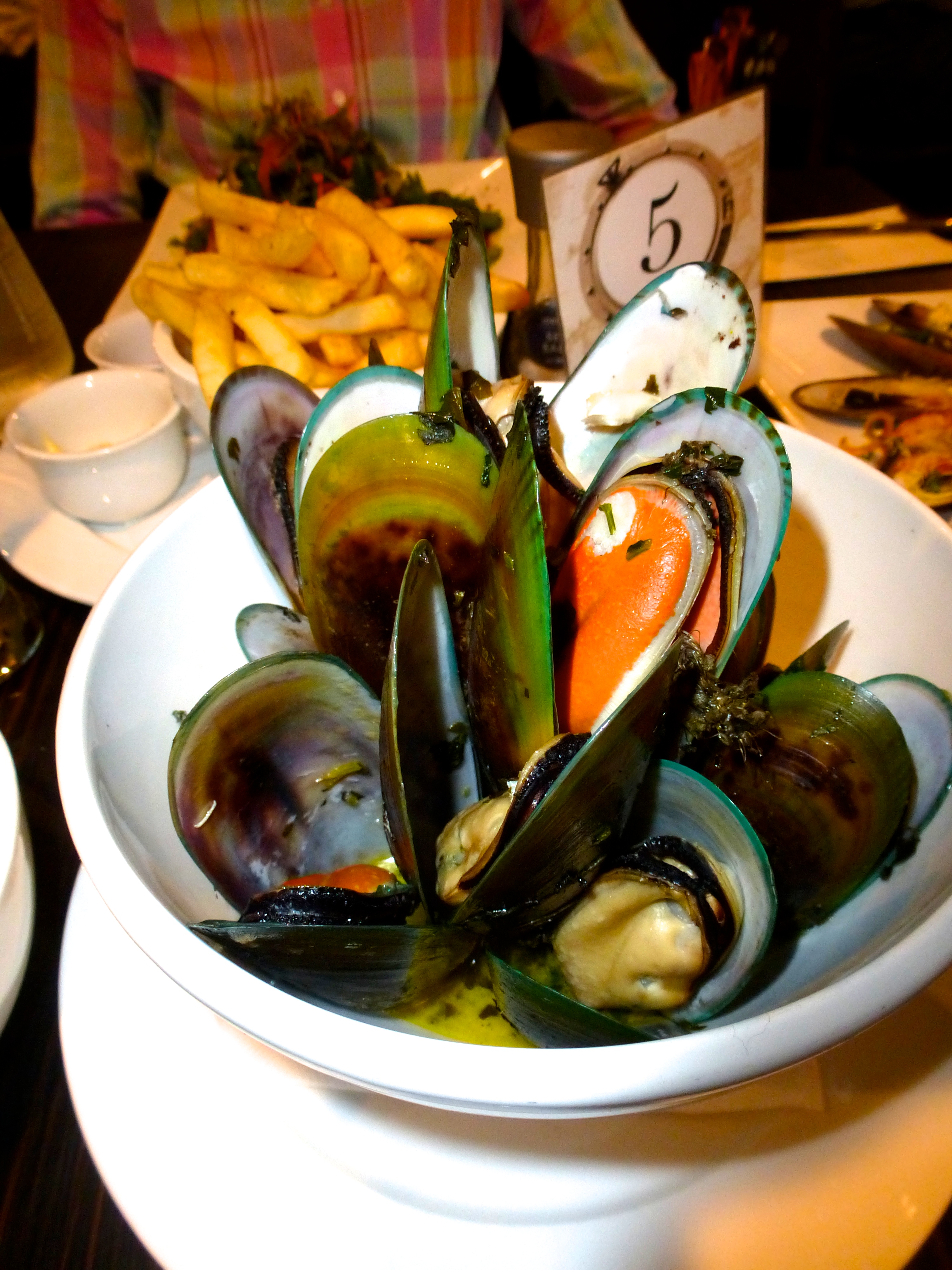 A male mussel (females are orange as they have roe). It’s a substantial bite. 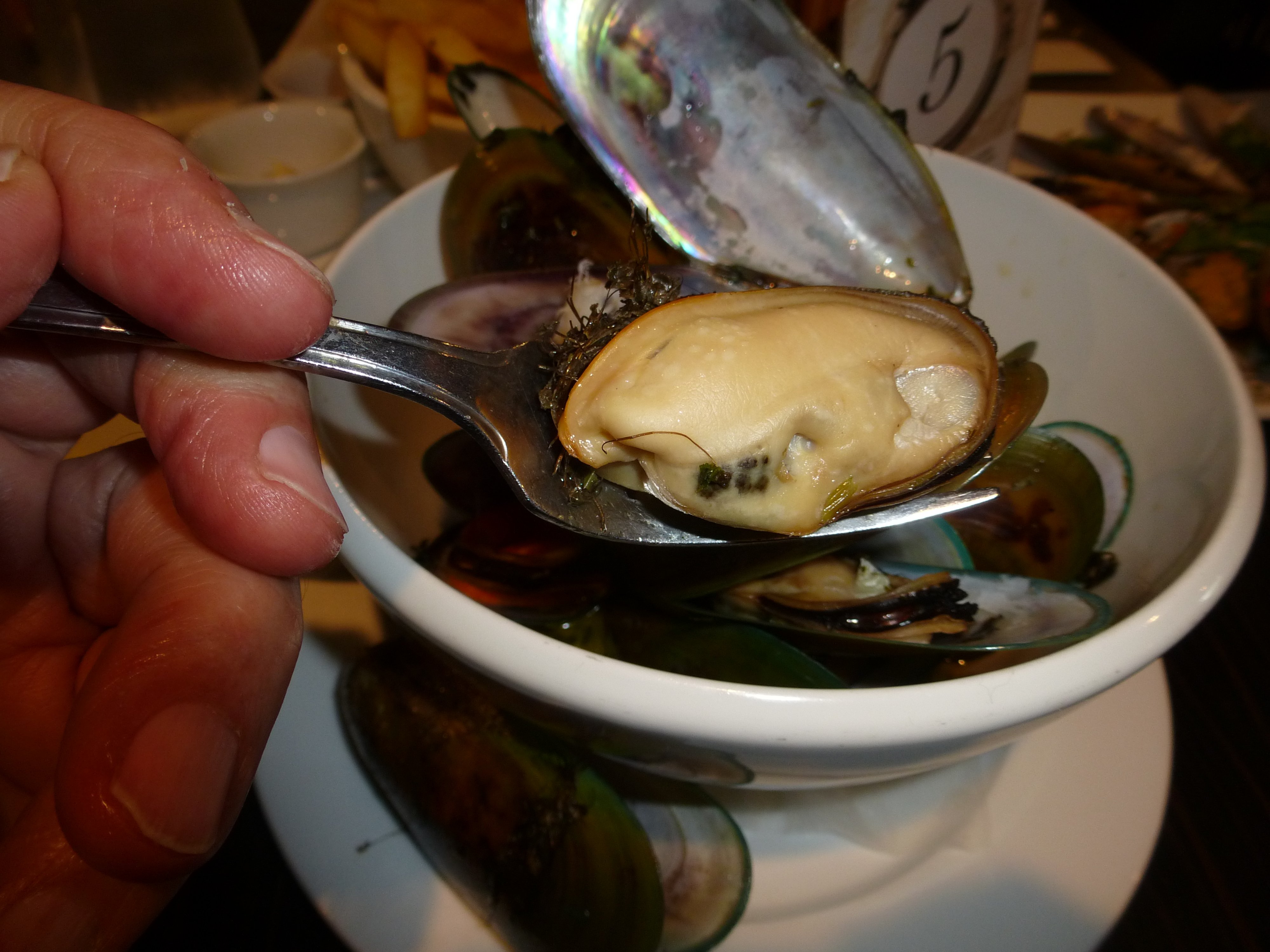 Each New Zealand town has a monument to its young men who died in World Wars I and II, many in Gallipoli. In World War I, the Kiwis fought together with the Aussies in the ANZAC alliance: the Australia and New Zealand Army Corps. 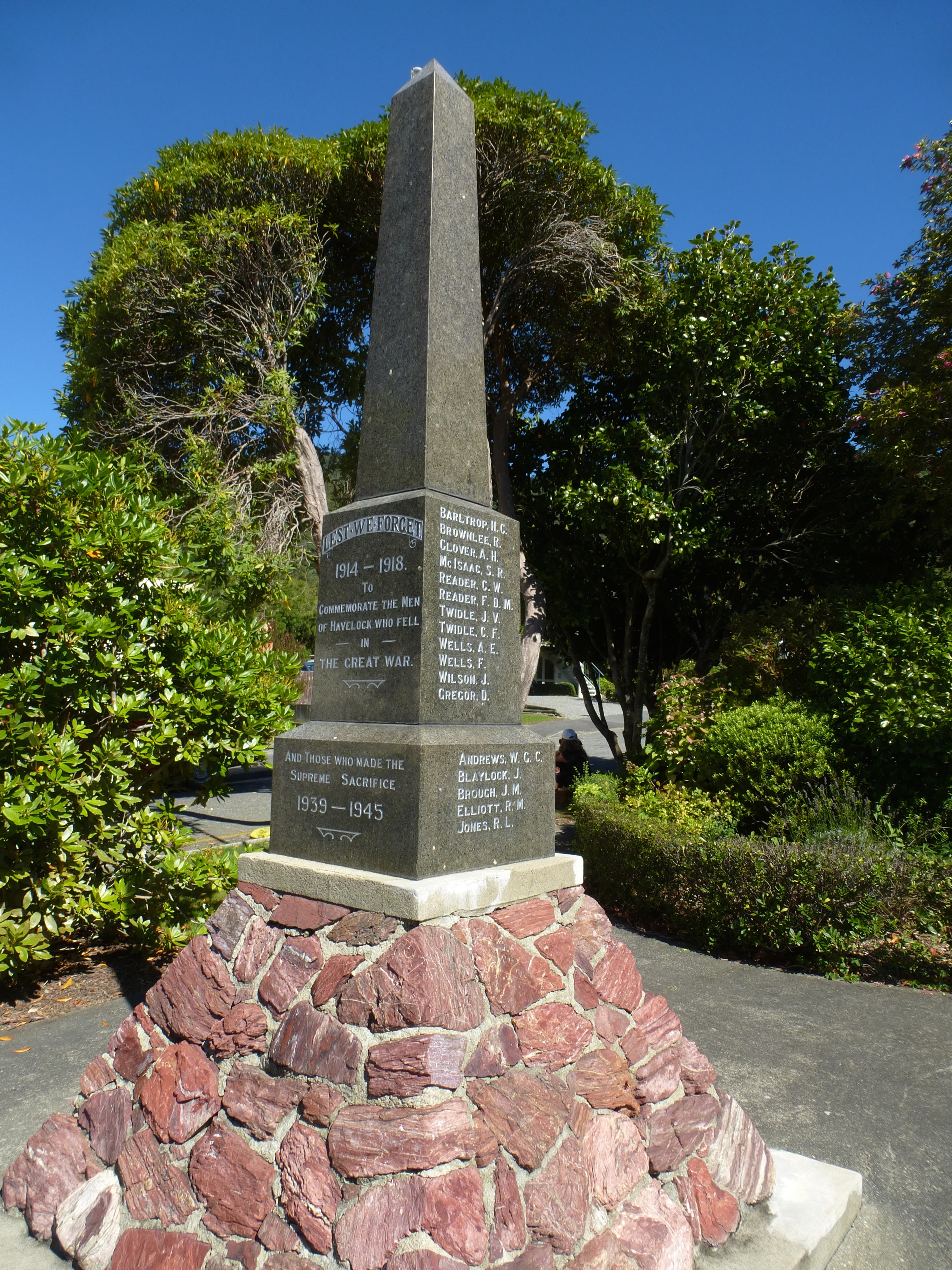 Havelock has two famous sons, both of whom left New Zealand to make their names in science. One is William Pickering, an aerospace engineer who, in the U.S., designed guidance systems for both ballistic missiles and spacecraft. He’s commemorated near the war memorial. 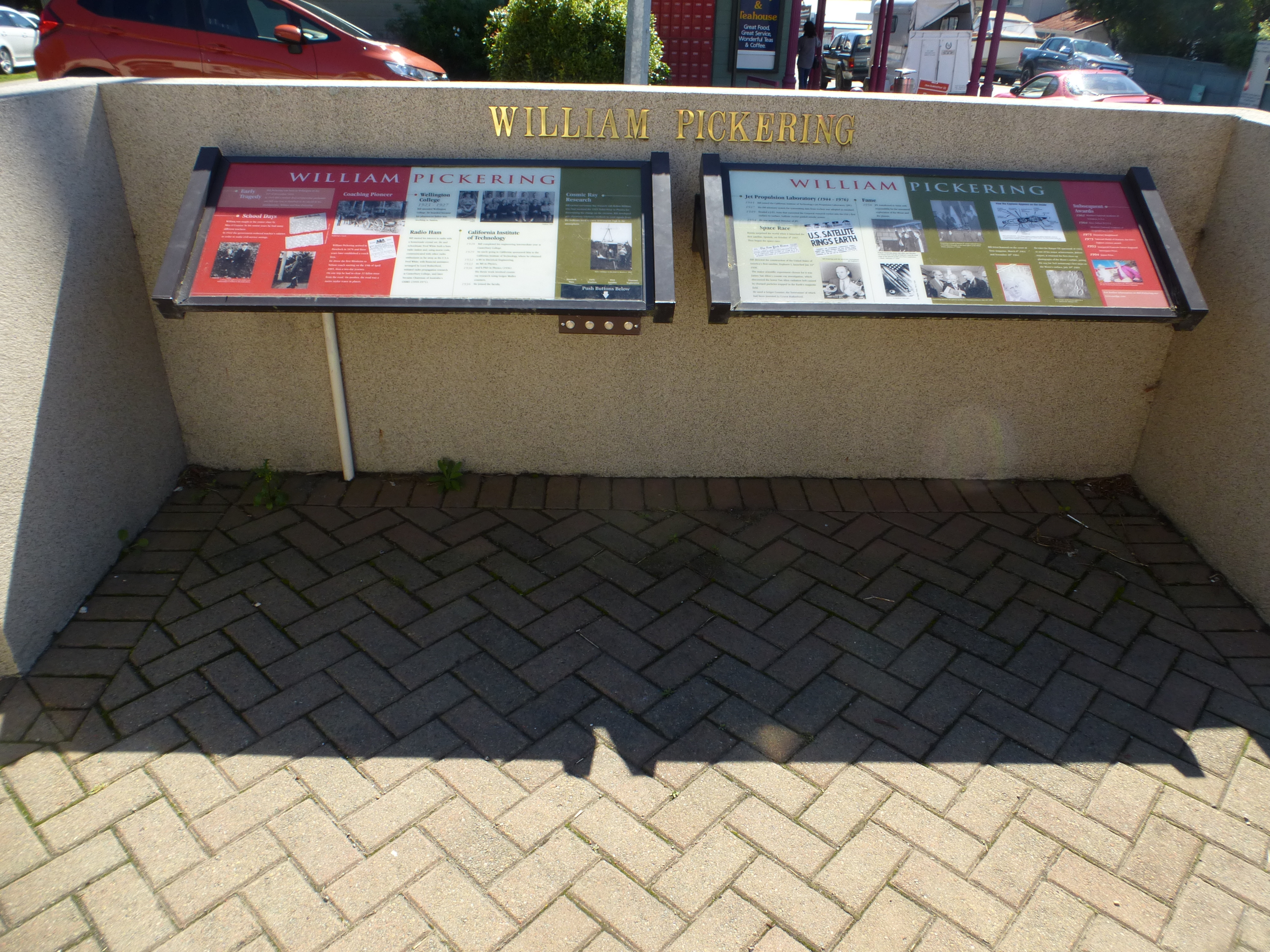 The other, more famous, is Ernest Rutherford, the physicist who won a Nobel Prize for Chemistry. His achievements were many and legendary; here’s a precis from Wikipedia:

In early work, Rutherford discovered the concept of radioactive half-life, proved that radioactivity involved the nuclear transmutation of one chemical element to another, and also differentiated and named alpha and beta radiation. This work was done at McGill University in Canada. It is the basis for the Nobel Prize in Chemistry he was awarded in 1908 “for his investigations into the disintegration of the elements, and the chemistry of radioactive substances”, for which he is the first Canadian and Oceanian Nobel laureate, and remains the only laureate born in the South Island.

Rutherford moved in 1907 to the Victoria University of Manchester (today University of Manchester) in the UK, where he and Thomas Royds proved that alpha radiation is helium nuclei. Rutherford performed his most famous work after he became a Nobel laureate. In 1911, although he could not prove that it was positive or negative, he theorized that atoms have their charge concentrated in a very small nucleus, and thereby pioneered the Rutherford model of the atom, through his discovery and interpretation of Rutherford scattering by the gold foil experiment of Hans Geiger and Ernest Marsden. He conducted research that led to the first “splitting” of the atom in 1917 in a nuclear reaction between nitrogen and alpha particles, in which he also discovered (and named) the proton. 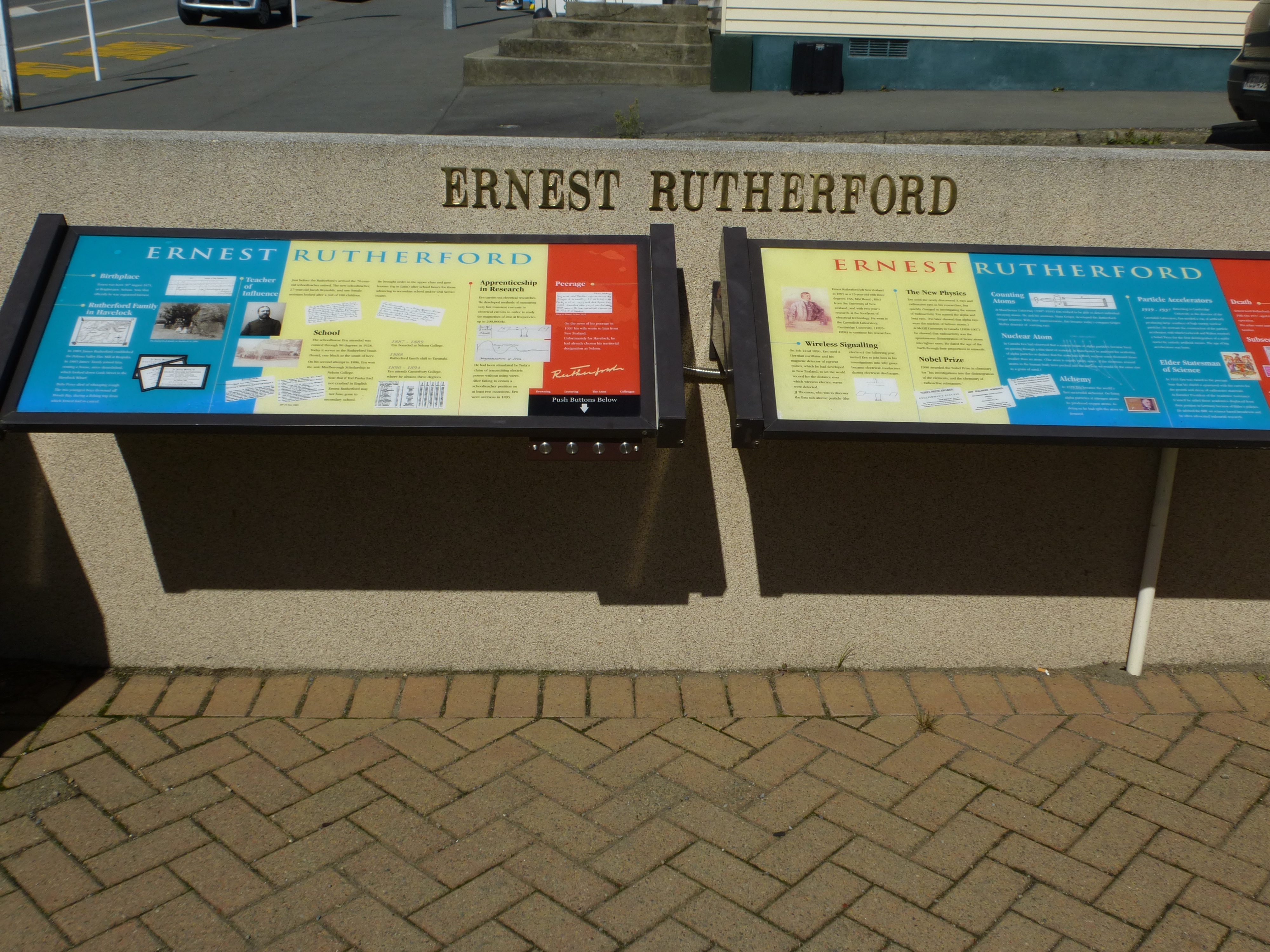 41 thoughts on “New Zealand: A sheep station (and mussel lagniappe)”