I’m staying near Pelorus Bridge (not a village but a small bridge over the Pelorus River), famous for being not only the first bridge from which somebody bungee jumped, but also for featuring in one scene in a Hobbit movie, to wit:

Part of the pretty Marlborough Sounds at the very top of the South Island, the Pelorus River was filmed as Forest River for the second of The Hobbit trilogy, The Desolation of Smaug. You know the bit where they escape the Wood-elves in barrels and float down the river to Lake-town? Well the drop was done at Pelorus Bridge. The Pelorus Bridge Camping Ground, which is an excellent place to stay, was closed for filming. The river is awesome to swim in – that area of New Zealand is especially nice and warm – and, no doubt, kayaking down it is set to become a lot more popular. 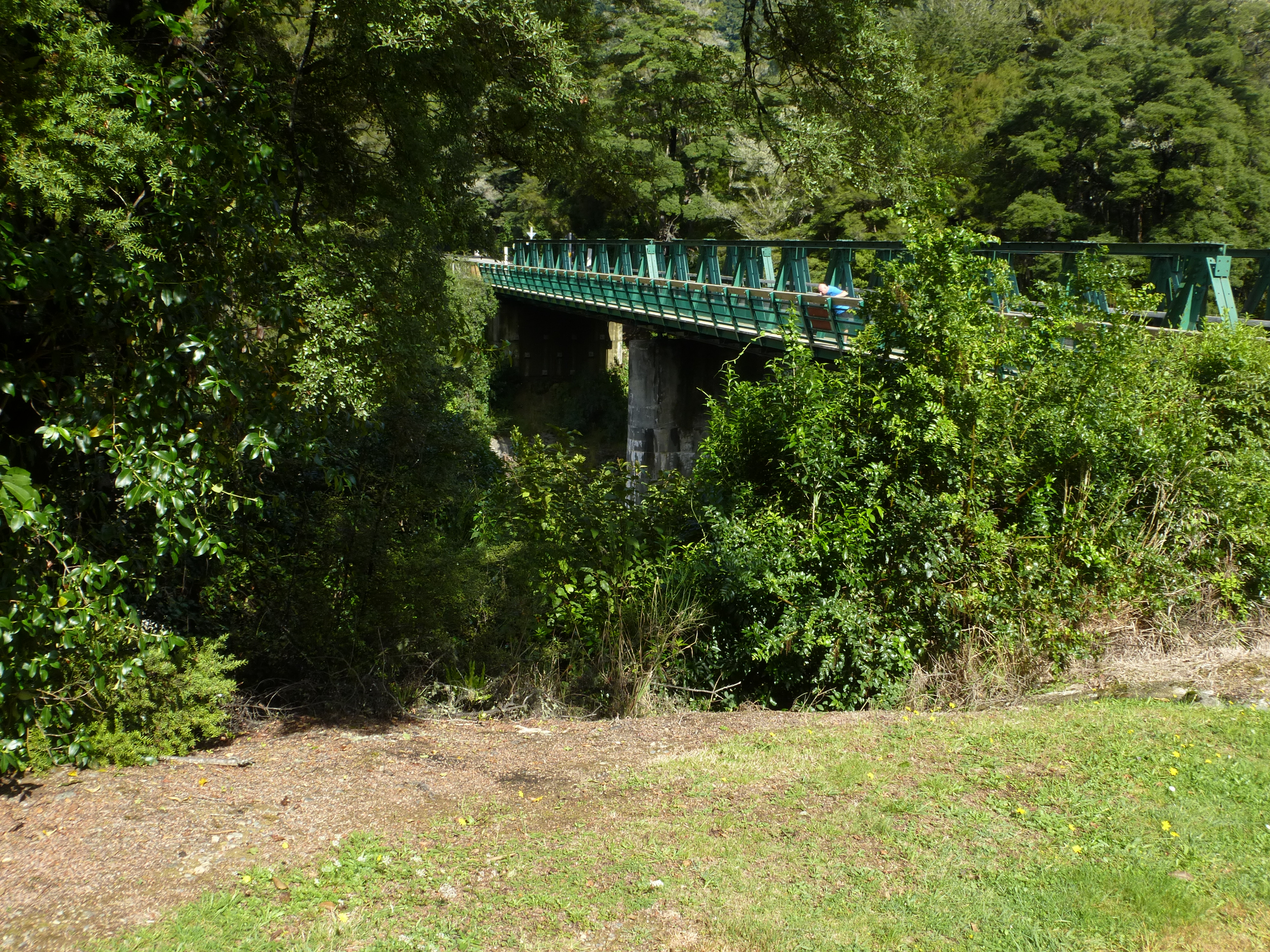 Filming right below the bridge: 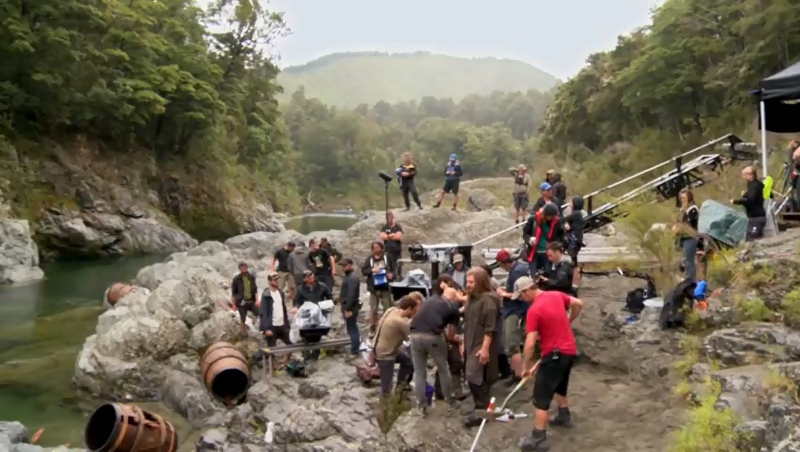 Here’s where I am: the north tip of the South Island. Tomorrow I head for Picton to take the ferry to the North Island, landing at Wellington: 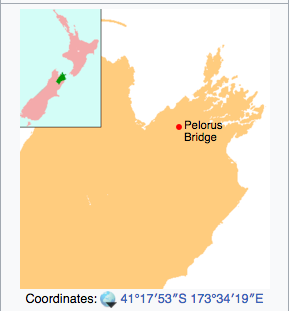 But my host Don MacKay, a retired teacher, biologist, gentleman farmer, Scottish descendant (who plays bagpipes), and great guide, cook, and host (along with his lovely wife Karen, see below) took me to the bridge because it contains a wonderful, dense stand of virgin forest, through which we roamed for several hours, also checking the possum/stoat/rat traps that are there to try to keep the birds from going extinct. (The South Island robin, one of my favorite birds in New Zealand, doesn’t exist in this stand.) Wikipedia again, explaining why we were there (second paragraph):

Pelorus Bridge is a tiny locality in Marlborough, New Zealand where the Rai River meets Pelorus River. State Highway 6 crosses the Pelorus River at Pelorus Bridge Scenic Reserve, which was used as one of the film locations for The Hobbit: The Desolation of Smaug.

The scenic reserve contains one of the last stands of original river flat forest in the area. The forest contains a mixture of beech and broadleaf species, as well as mature podocarps such as rimu, kahikatea and totara towering over the canopy. Several easy walking tracks connect the camping ground, picnic site, river, and the carparks. A circular walk leads over a pedestrian suspension bridge over the Rai River.

The first thing we saw was a stuffed long-tailed bat (Chalinolobus tuberculata) in the local cafe (Don monitors this species in the area). It is one of only two endemic mammals in New Zealand, the other being a species of short-tailed bats (Mystacina tuberculata). (It was Darwin who pointed out that on remote islands having endemic mammals, they are invariably flying mammals, showing that the endemics evolved after colonization.)

Here’s the long-tailed bat, which can fly 60 kph: 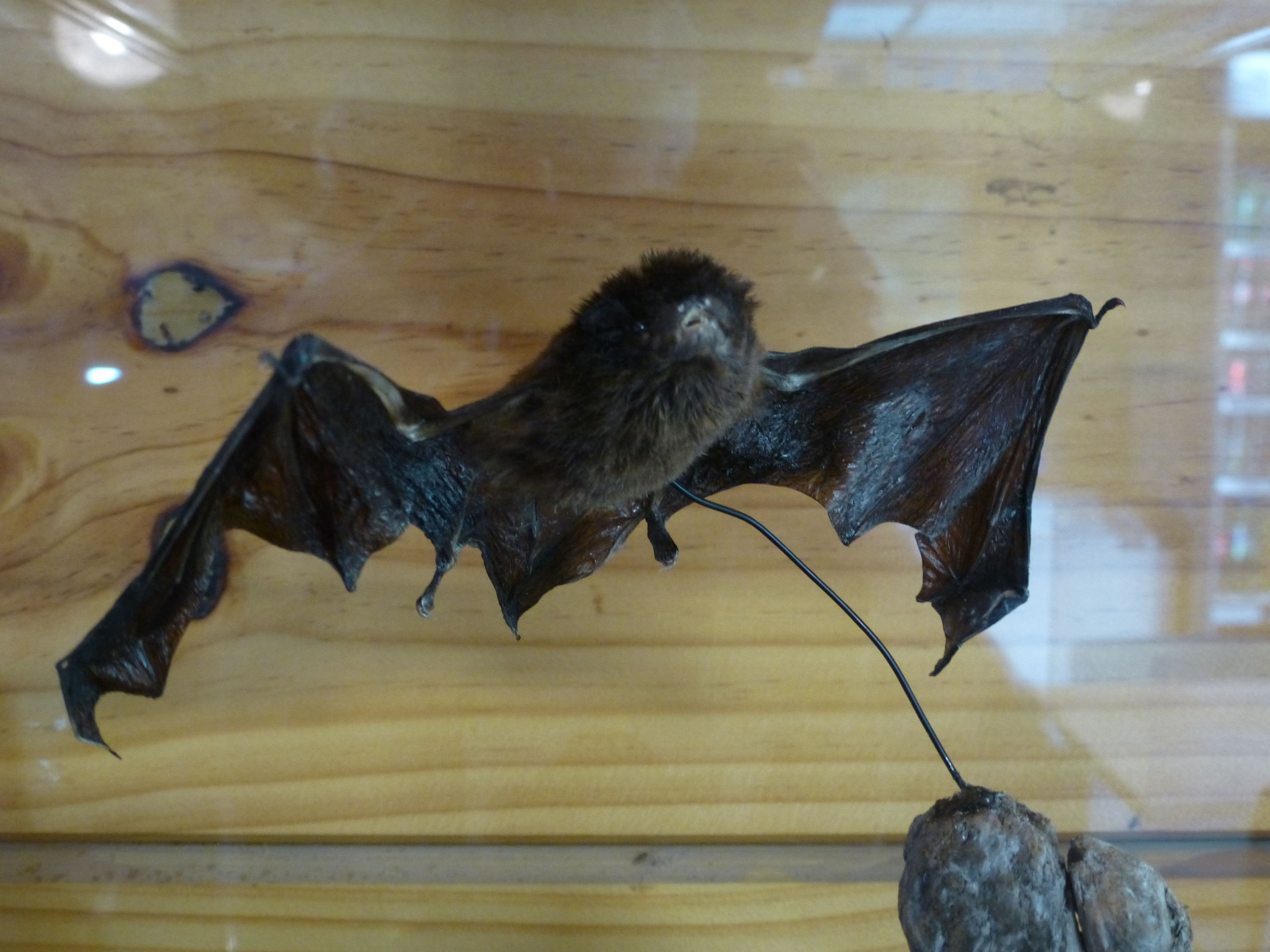 The lesser short-tailed bat is unique among all bats because it’s semi-terrestrial! It has very thick fur and spends 30% of its foraging time hunting in the air, 40% feeding from plants, and 30% crawling around the ground looking for food, for which it has a unique adaptation:

To assist with this unusual style of hunting, short-tailed bats are able to fold their wings inside a protective sheath formed from their membranes, and the wings have only a very limited propatagium, making them more flexible and mobile. Movement along the ground is also assisted by strong hind limbs and a robust pelvic girdle, and by the additional talons on their claws.

Look at this bat crawling around like a rodent!!! You can’t see its wings!:

One of the first trees we came across, kahikatea (Dacrycarpus dacrydioides), had beautiful patterned bark: 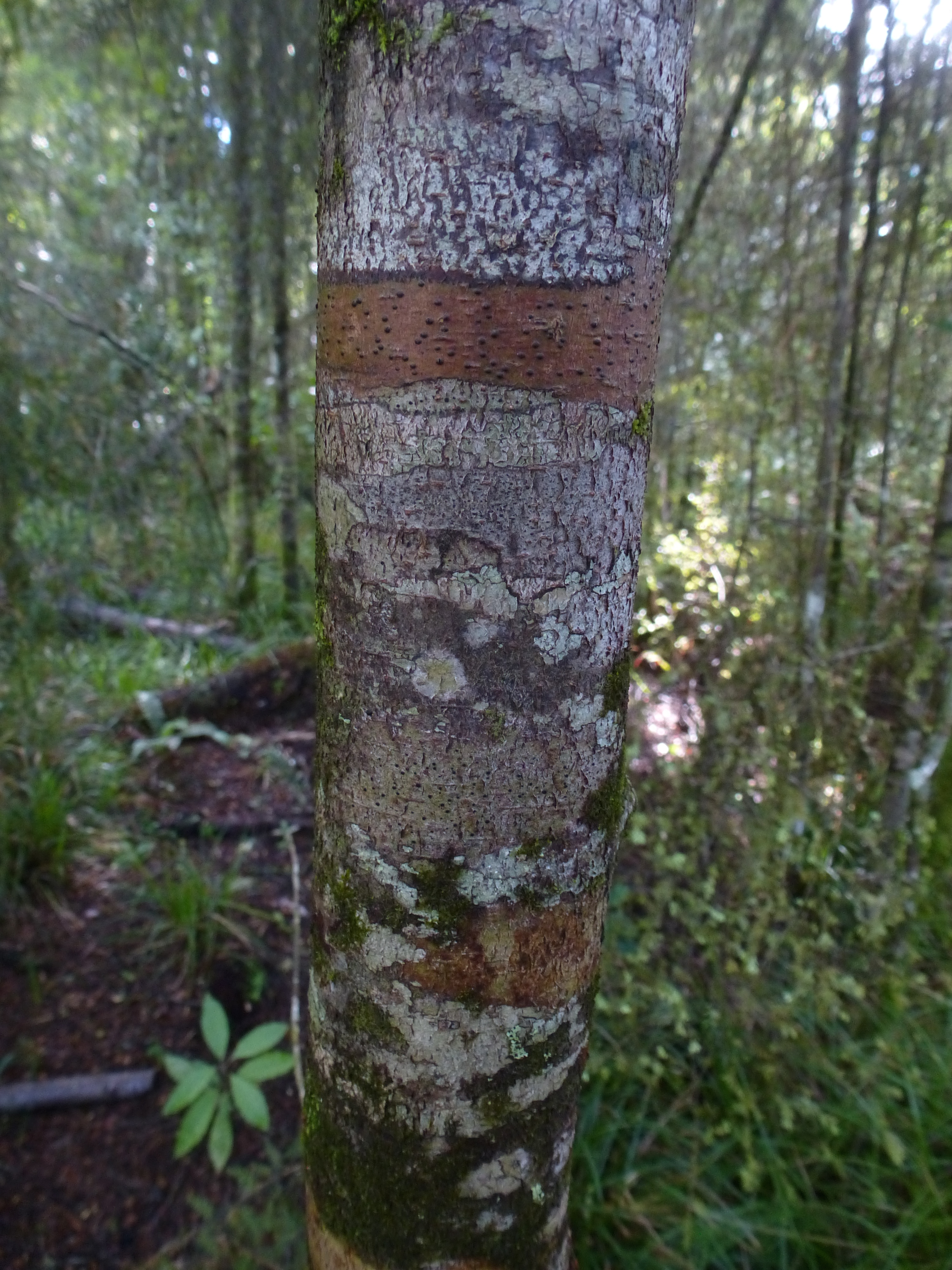 I cropped the trunk to make it look like an abstract painting:

It is of course very wet there, and the tree trunks are often festooned with lichens and ferns that fall off when the bark flakes off: 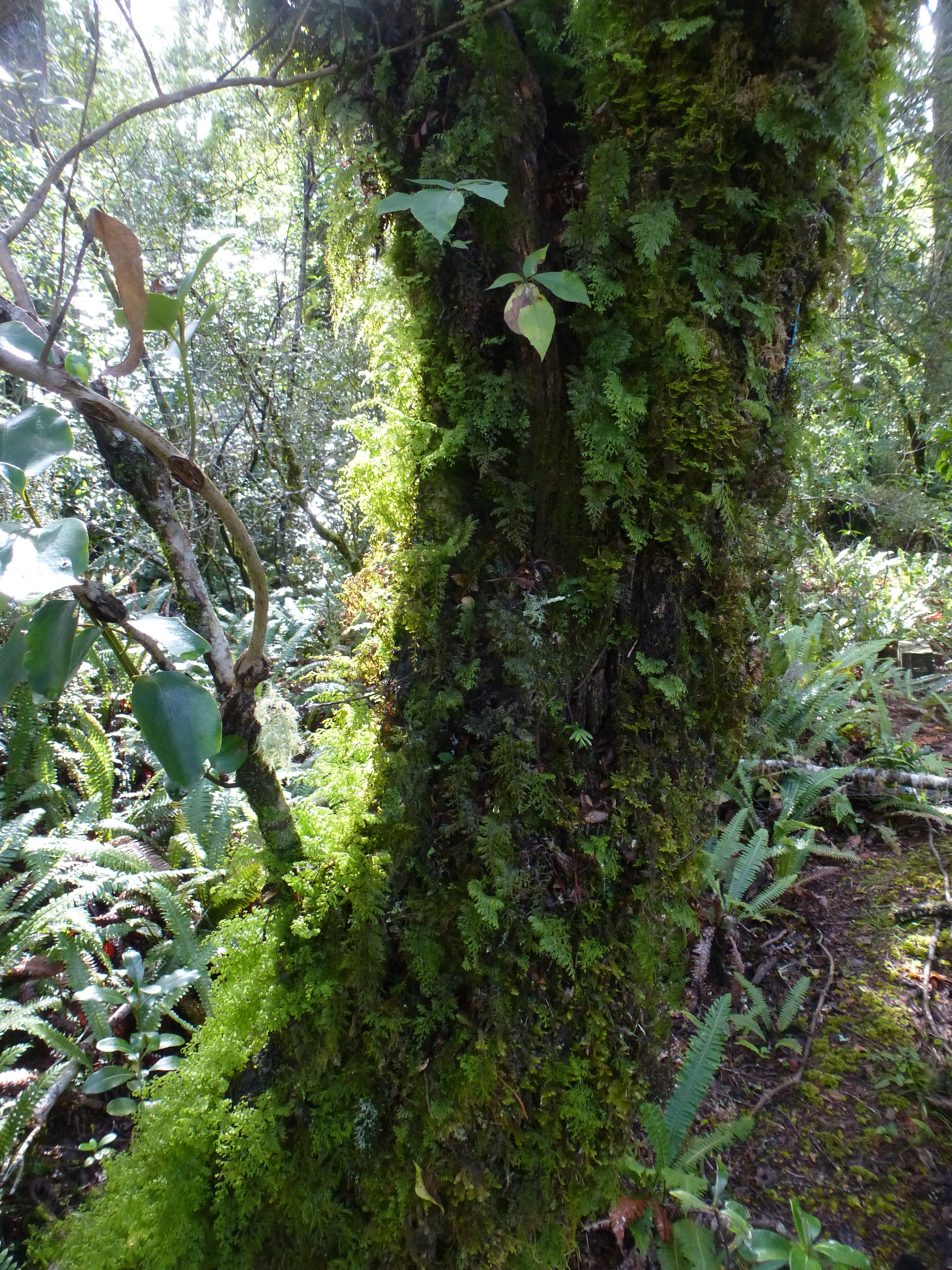 I don’t know if this is a fern or a liverwort, but I’m sure some of you botanists can tell us: 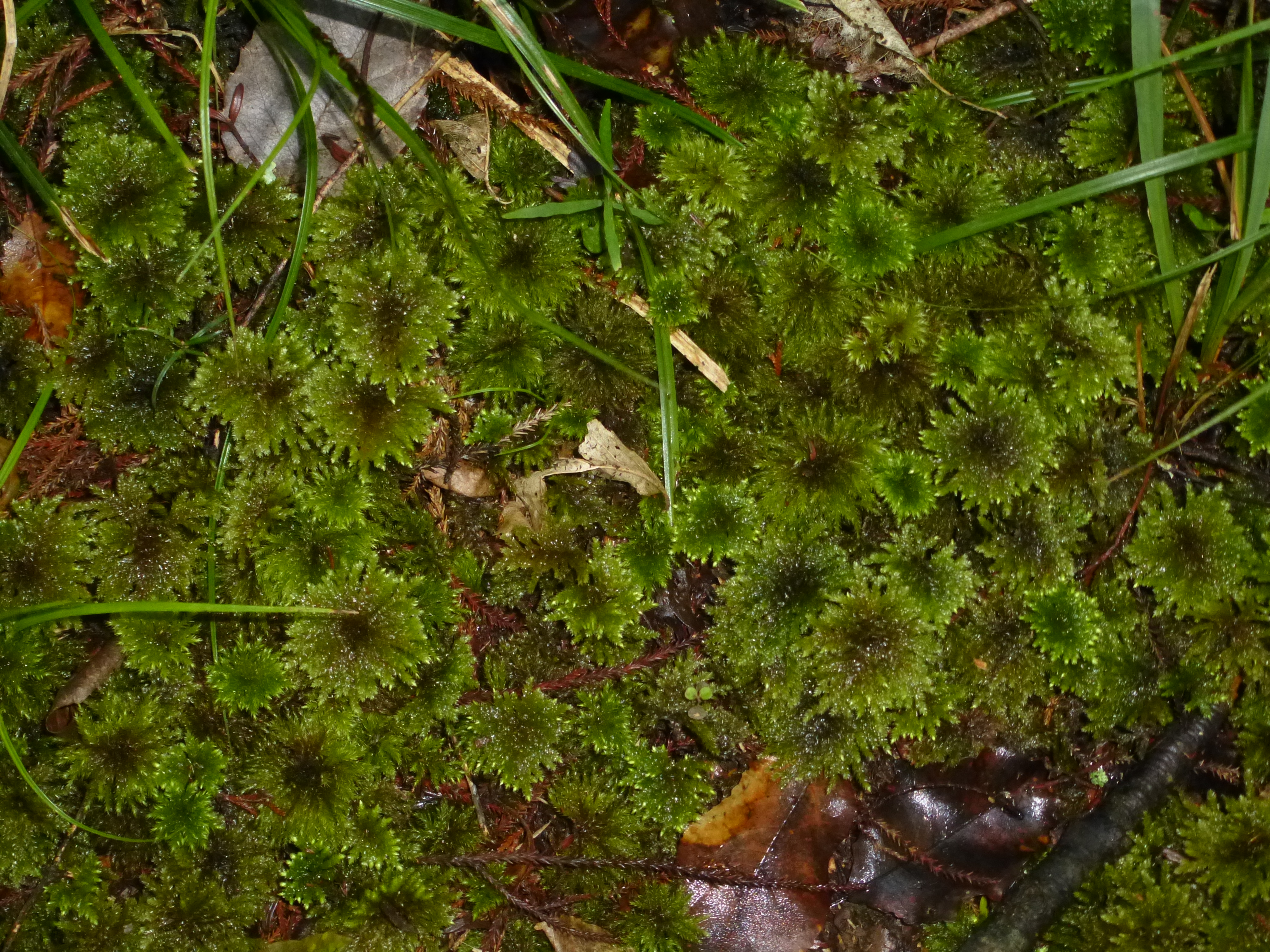 This is what the virgin forest looks like—mostly beeches, podocarps, and ferns with assorted other species of endemic trees. This patch of forest has no invasive plants, though of course there are invasive animals, including weasels and stoats, Australian brush-tailed possums, and two species of rats. 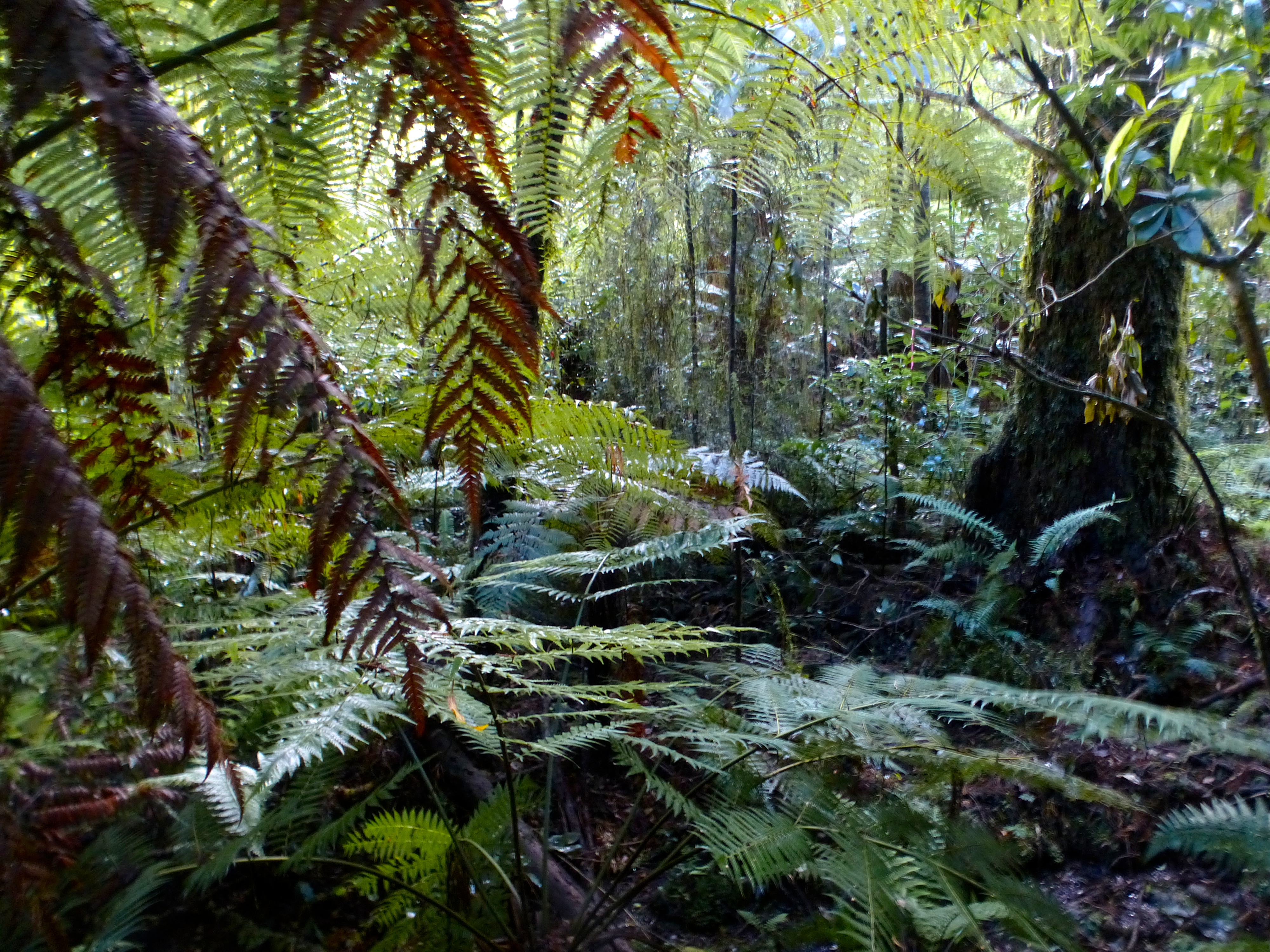 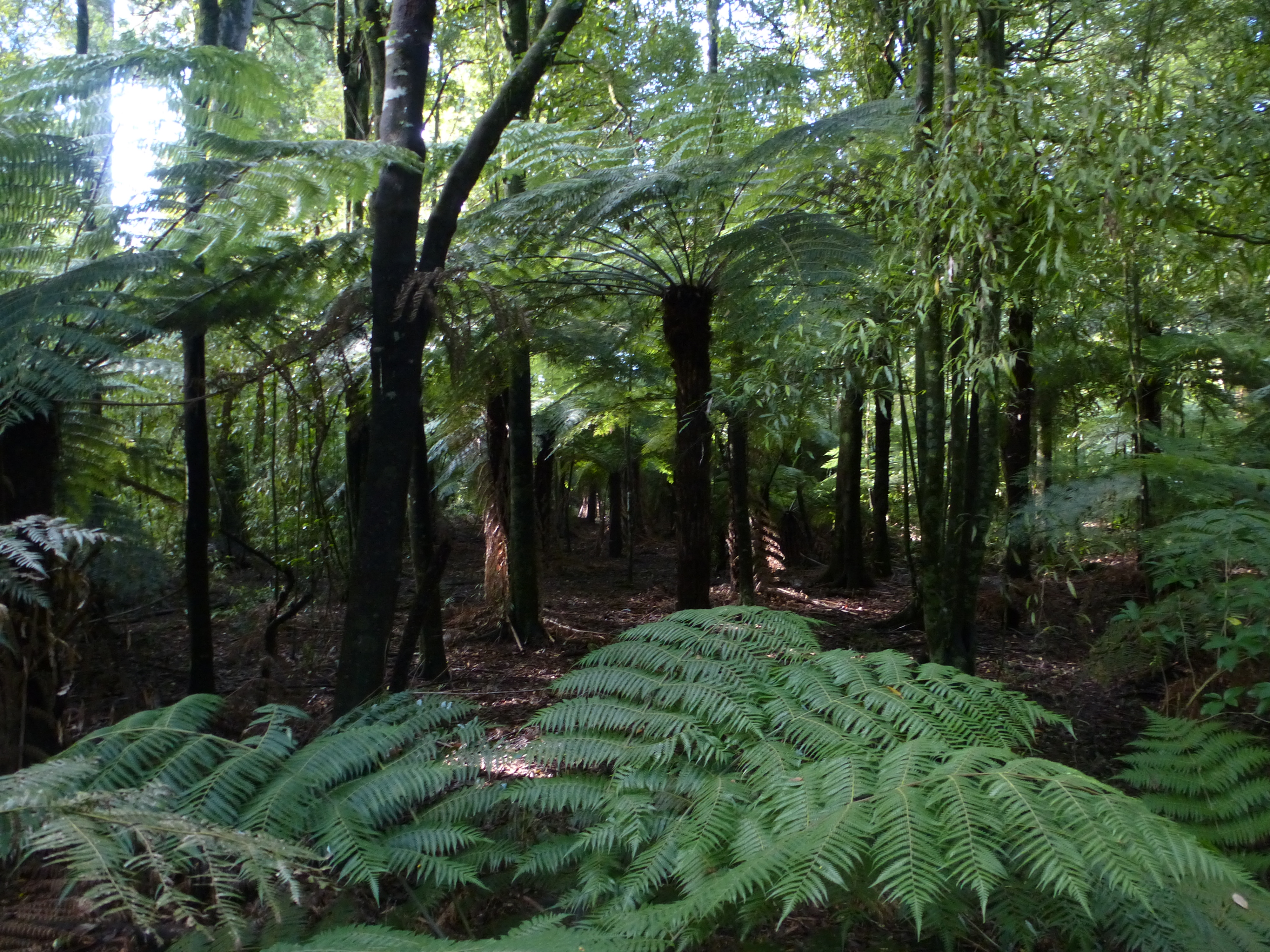 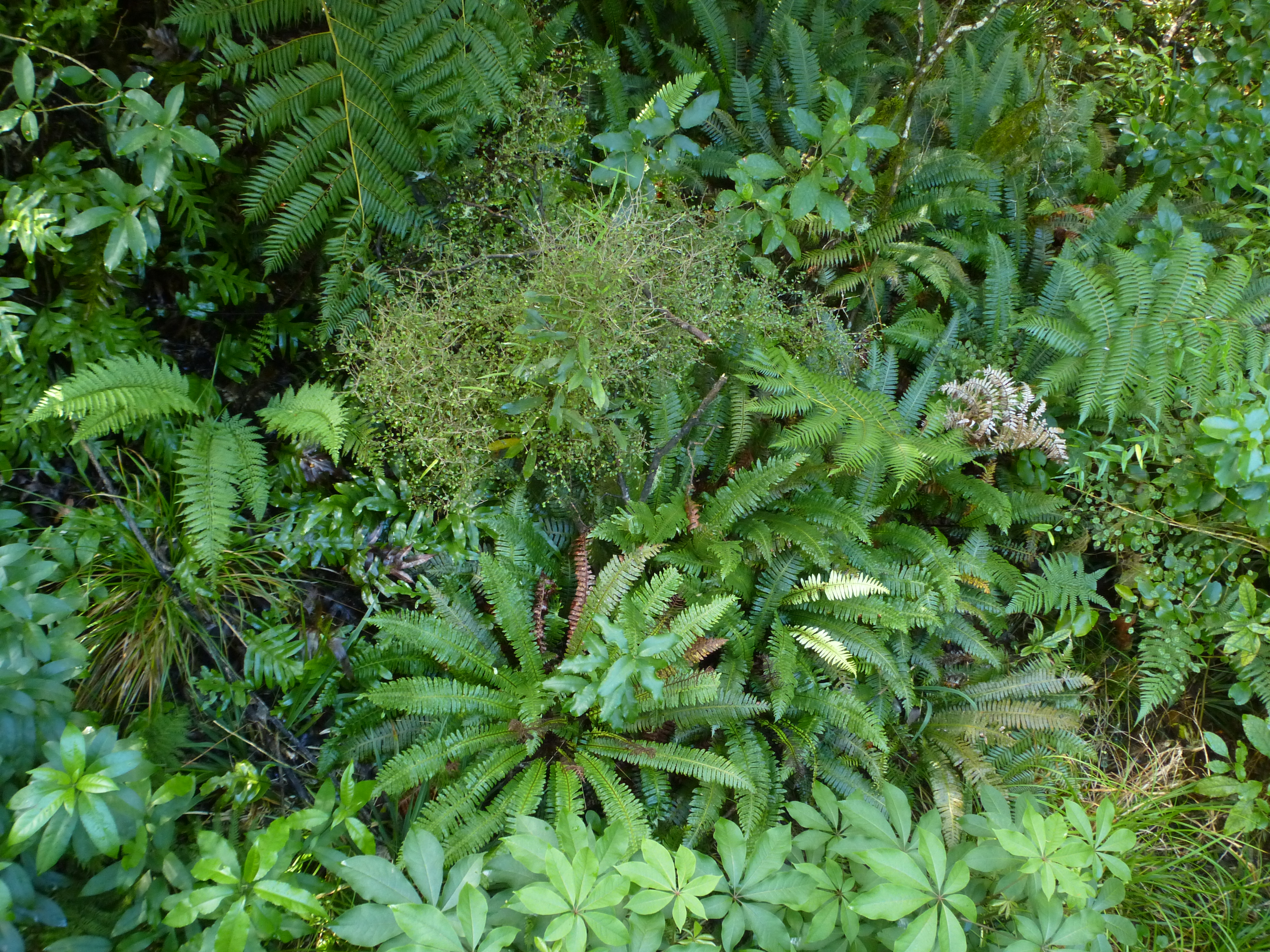 The forest is filled with black beech (Fuscospora solandri), an endemic that has a black trunk—but the color comes not from the bark, which is whitish, but from a black mold that covers the trunk. And that mold is there because the bark is infested with scale insects that, in two of their instars (life stages) secrete a honeydew from their rear ends after feeding on the tree’s phloem. Here you can see the mold coming off of the tree and covering the ground around it, showing that it’s not the bark color! 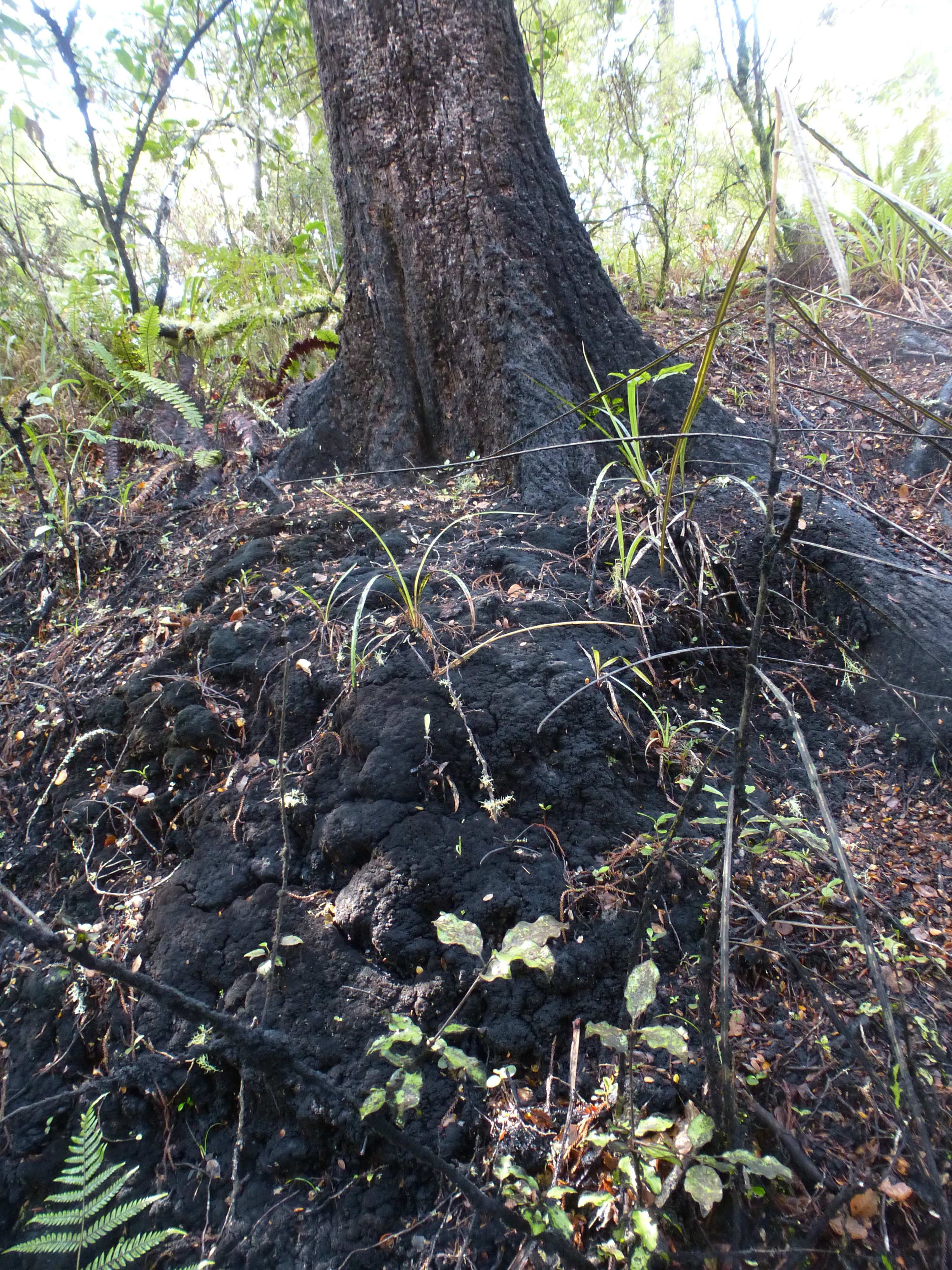 Wasps are now invading the forest eating the honeydew, which was previously a valuable source of nutrients for insects and birds, including the kākā parrot (Nestor meridionalis), sister species to the kea. In my photo below, you can see the long butt appendage of the scale insect exuding a drop of nectar.

The New Zealand Conservation folk are trying to get rid of the invasive wasps using baits that have a proteinaceous poison that the wasps carry back to their nests, feed to the grubs, and then is re-secreted to the wasps, killing them. It seems to be effective. If the wasps monopolize the honeydew, they will severely reduce the population of native insects and birds: 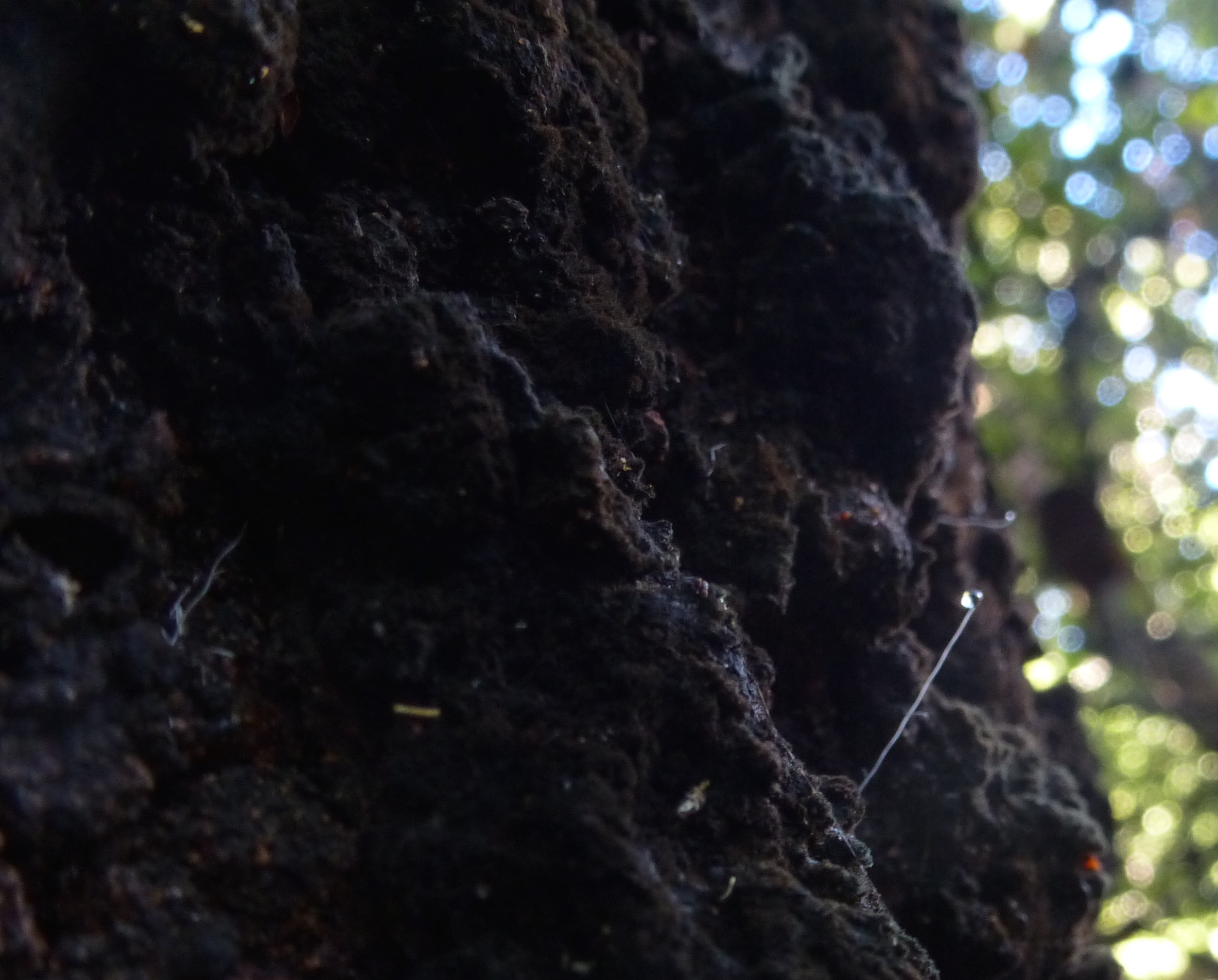 Don checking a possum trap.  He runs a trapline once a month. We didn’t do the whole thing, but did get two brown rats. I won’t show you the gory picture of a smushed rat. This trap kills the possum by putting a noose around its head, cutting off blood flow to its brain and quickly rendering it unconscious and then dead: 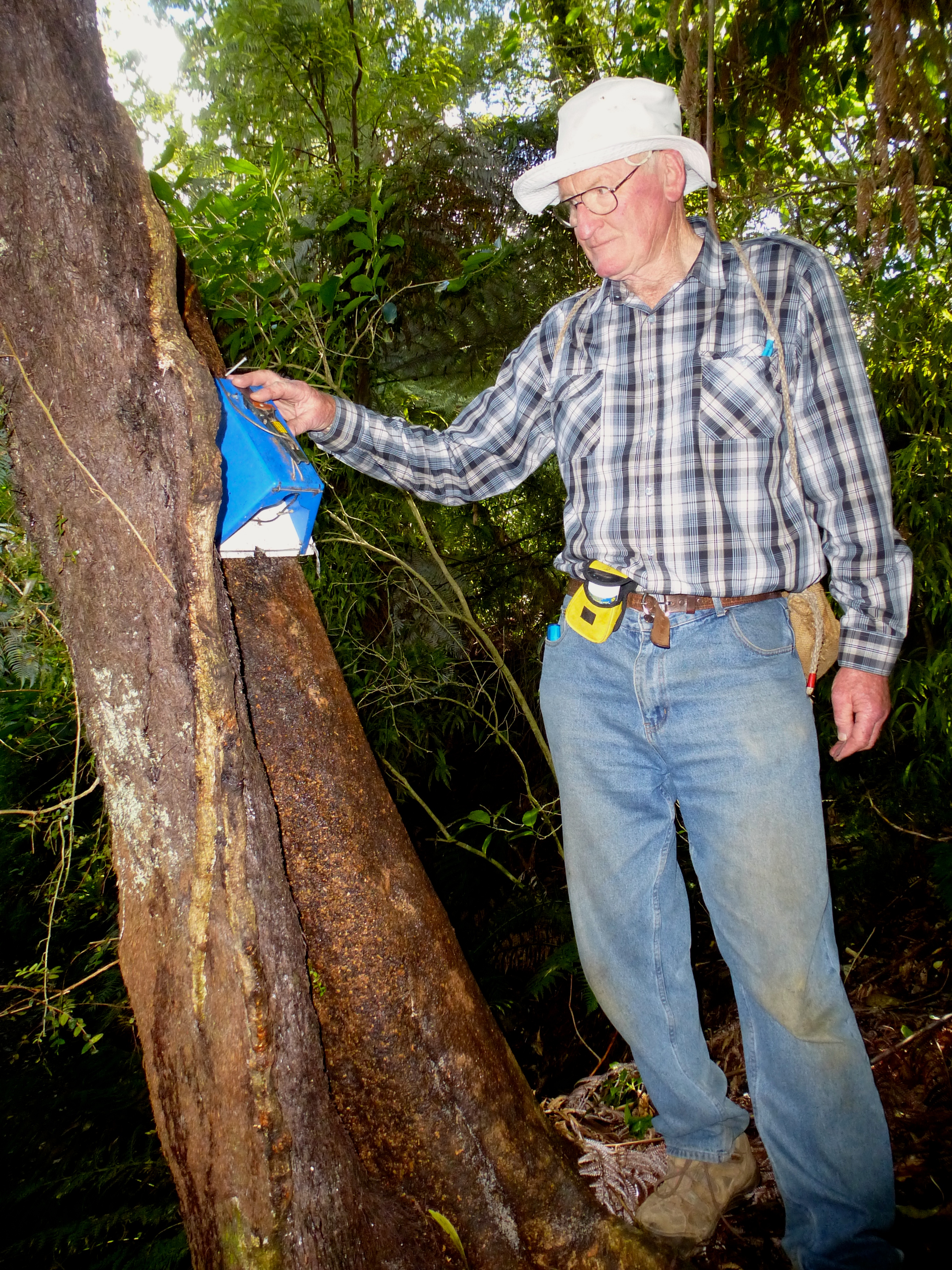 Berries in the forest are small, as are flowers. With no mammals in pre-human New Zealand to distribute seeds, the fruits have evolved to be attractive to and dispersed by birds. Likewise, the flowers are small, pollinated by birds and Lepidoptera (curiously, mostly moths, many of which fly by day). 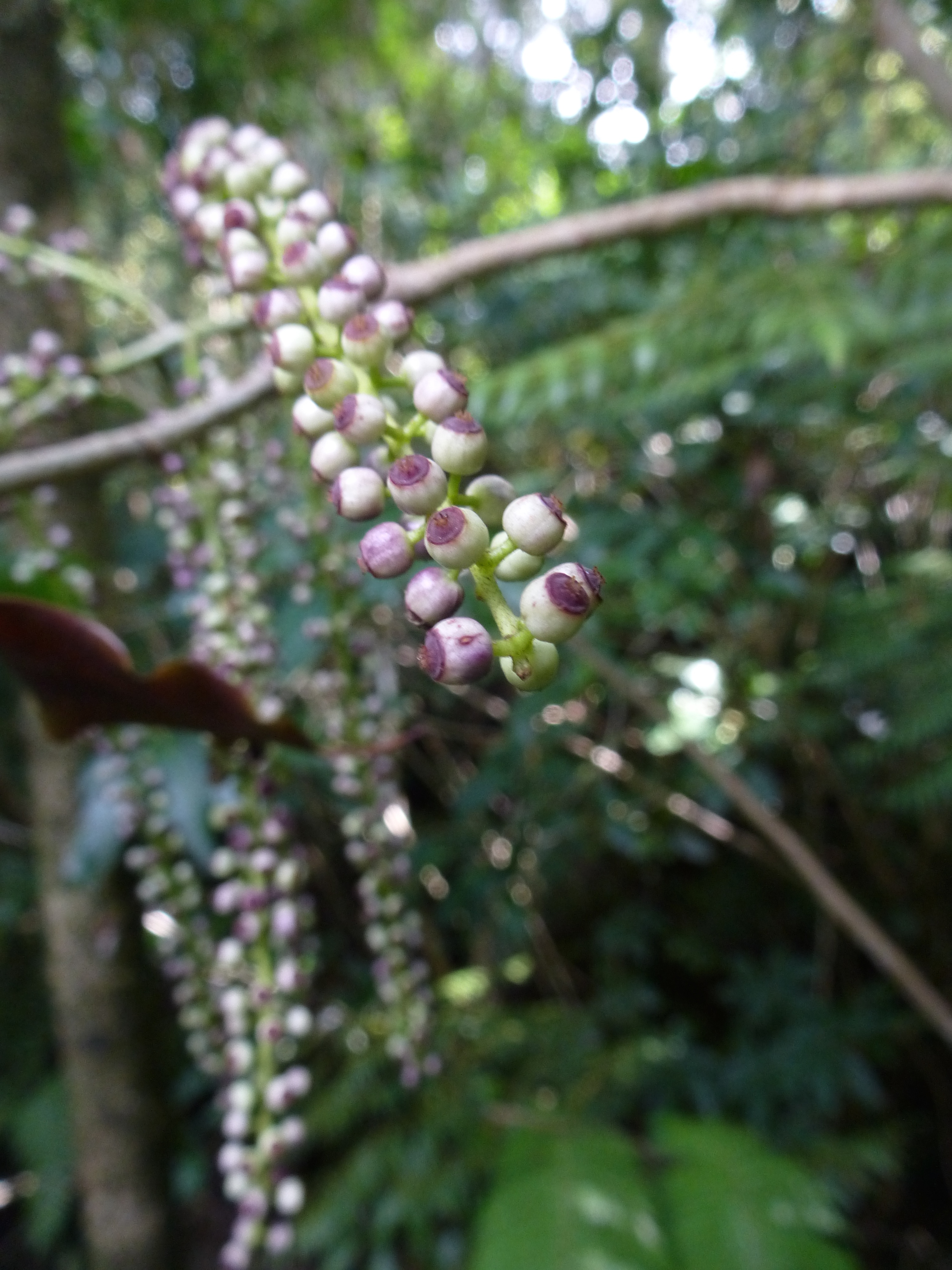 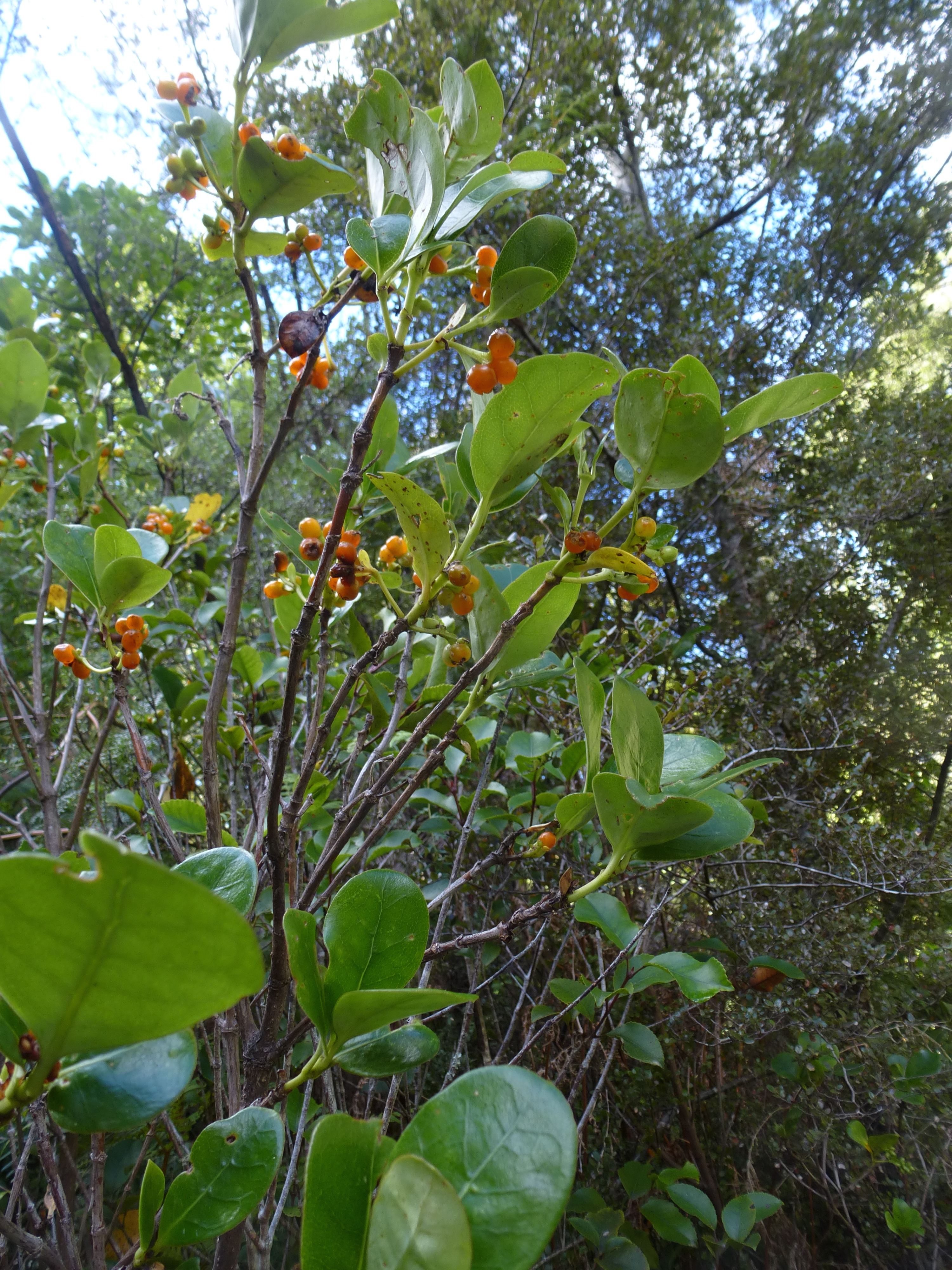 The famous New Zealand silver fern (Cyathea dealbata), a tree fern whose leaves are green on the top side and silvery on the bottom. It was used by the Maori to mark their trails at night, as the silver bottom shines brightly in the moonlight. Don demonstrates the difference between top and bottom: 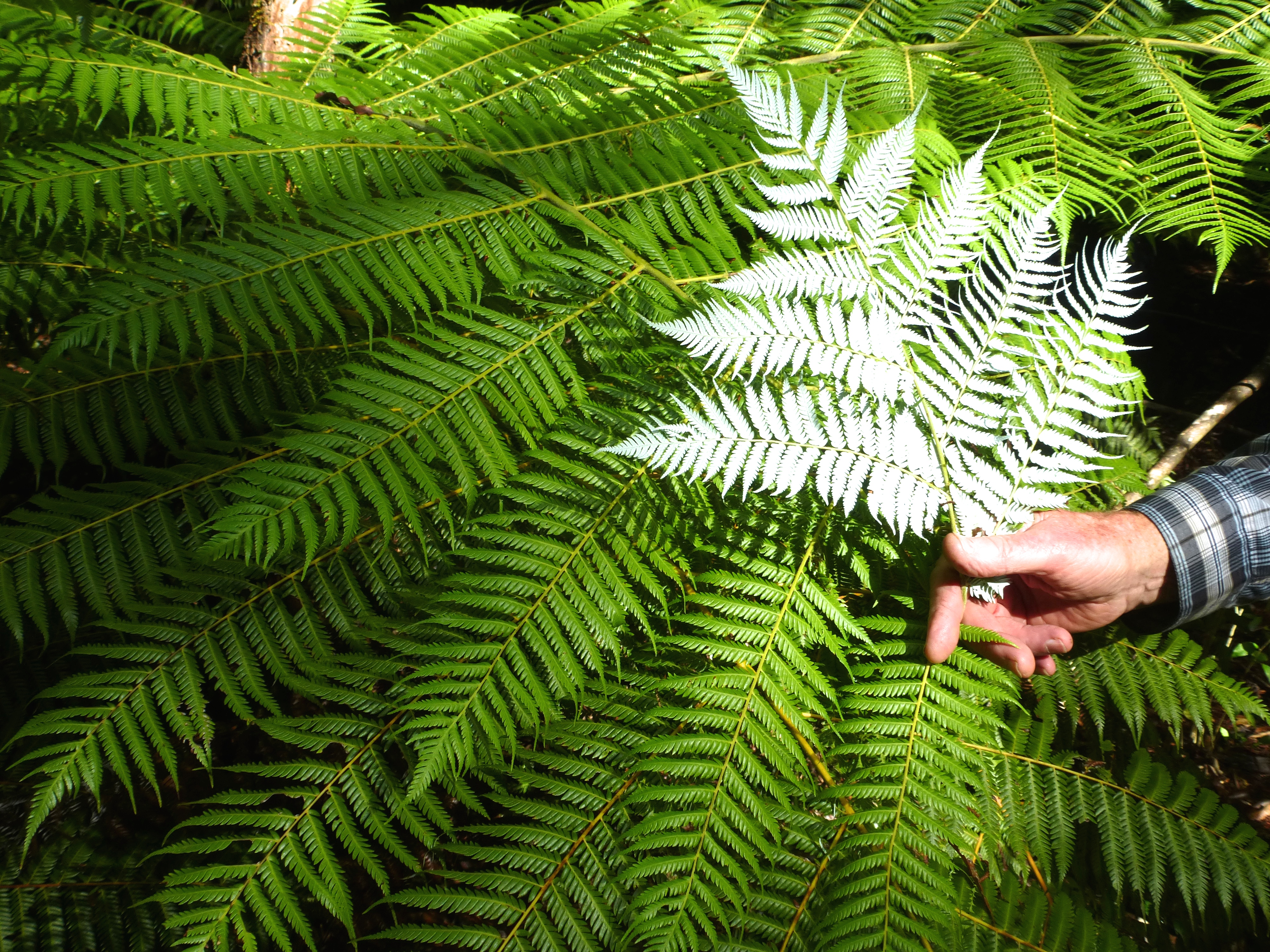 The silver fern is a national symbol here, appearing on the uniform of many national sports teams, including the famous All Blacks (rugby). It was also proposed to be part of the New Zealand National Flag, which now sports a Union Jack. They had a referendum two years ago to replace the current flag with a silver-fern flag (below), but the public rejected the design shown below, and the current flag (click on link) stays: 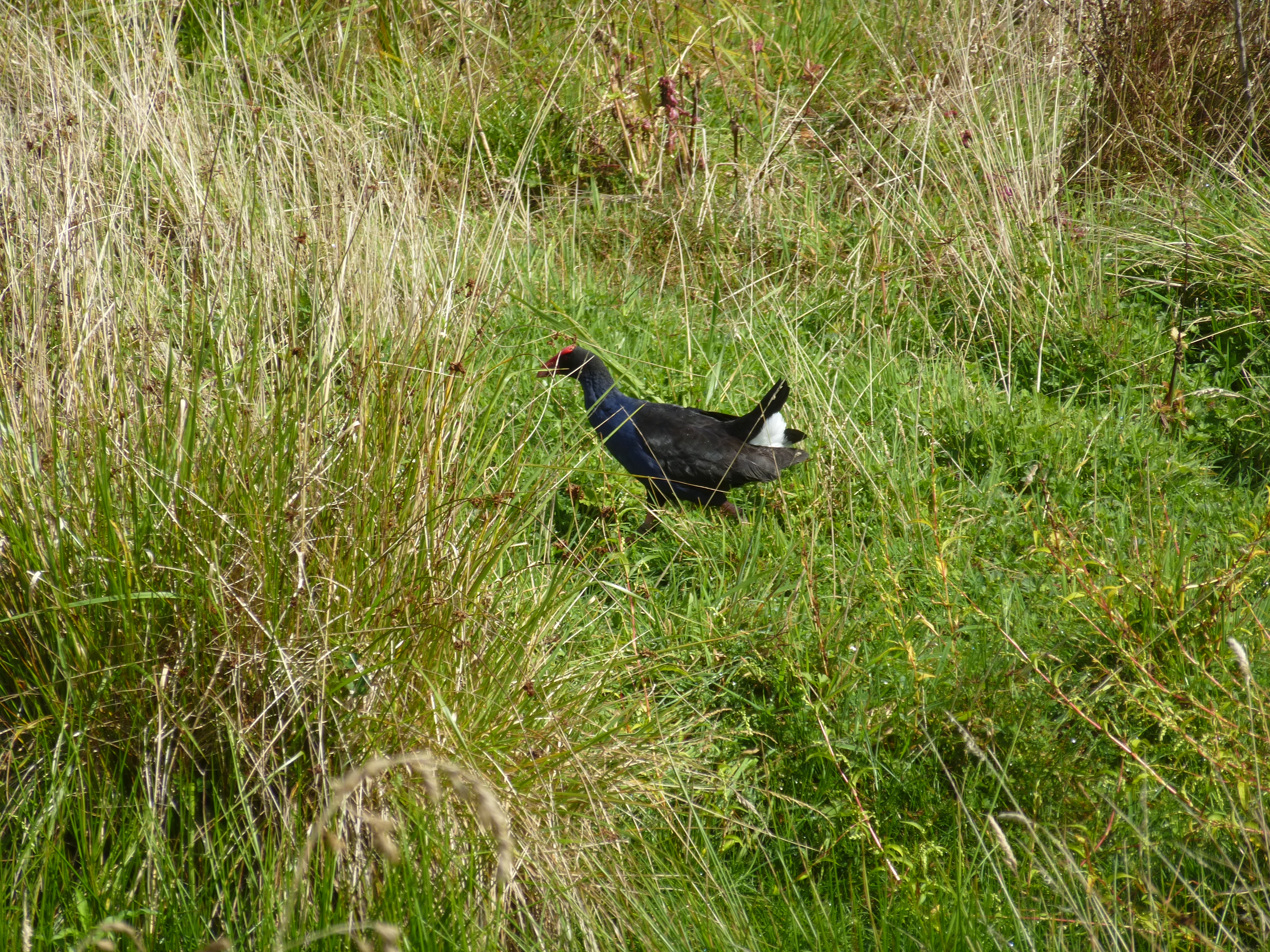 The New Zealand fantail (Rhipidura fuliginosa). Don attracted them by shaking ferns; the dropping leaflets looked like moths, attracting this insectivore, which followed us along the trail: 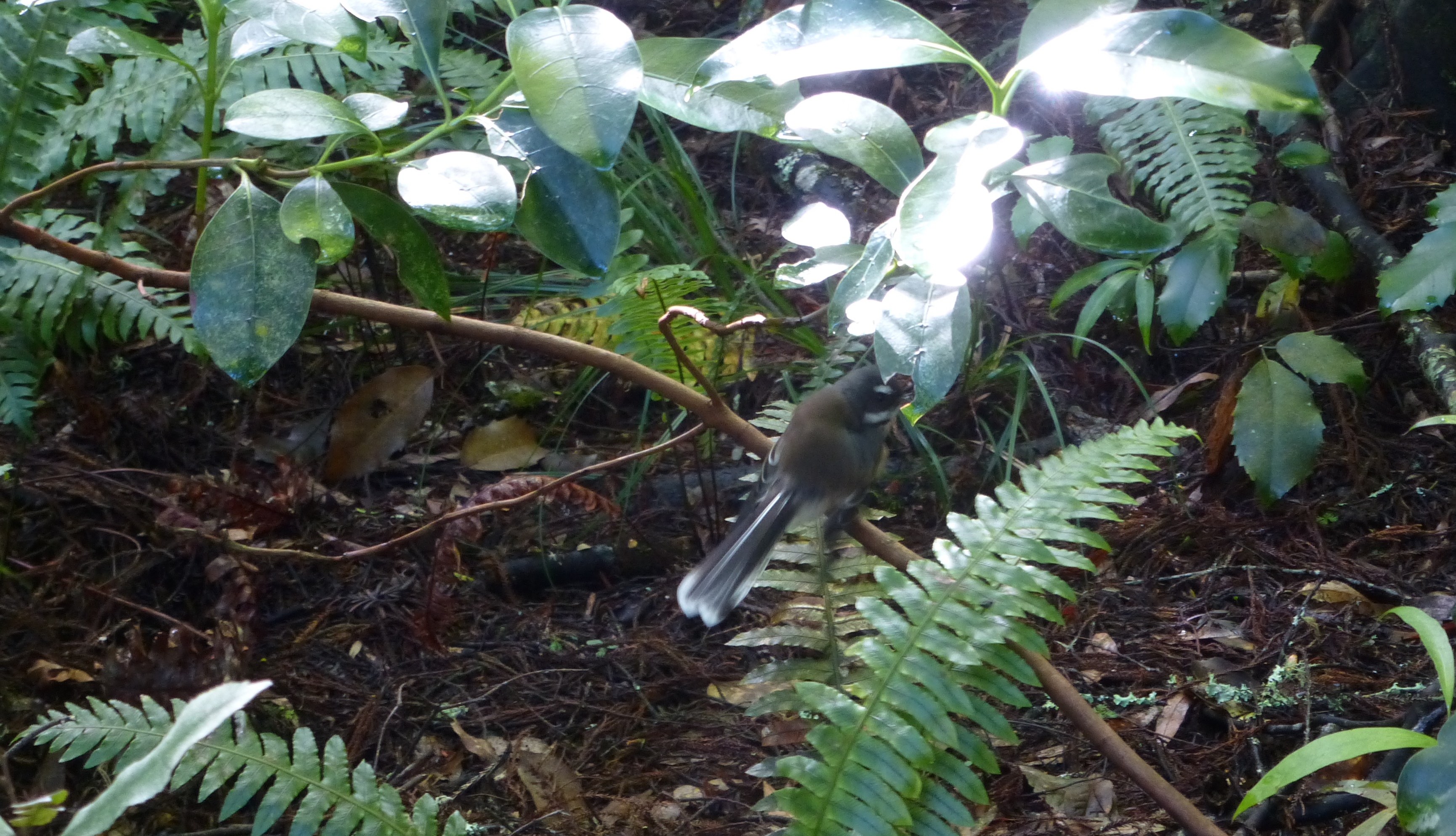 Below you can see a typical growth form of several forest trees, in which the lower branches have small leaves and branches that stick out horizontally, reverting to large leaves and normal twigs higher up. It’s thought this is a remnant of grazing by moas (now all extinct), to prevent them from overgrazing and killing the trees when they were young. The leaves supposedly get large and hence more sun-exposed when they’re beyond the reach of the moa’s beak.

Given that there were about a dozen species of moa of different sizes (ranging up to 3.6 m [12 feet] in height and weighing up to 23o kg [510 pounds]), this hypothesis would be difficult to test. Sadly, the moas were hunted to extinction by the Maori long before Europeans came to New Zealand.

This “moa tree” is Plagianthus betulinus, or ribbonwood. 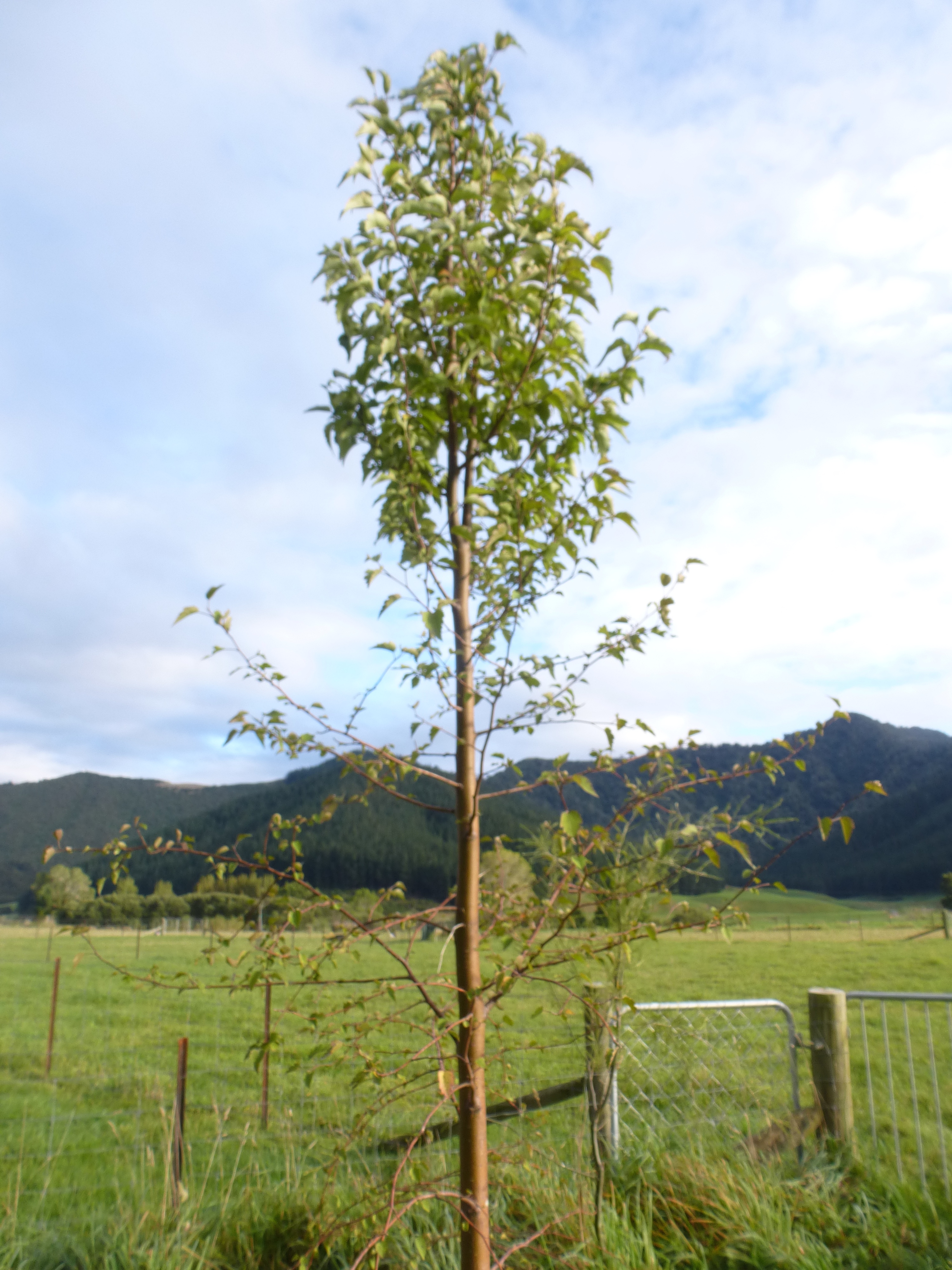 Below are Don and Karen MacKay, my fantastic  hosts, along with Sug (cat) and Geordie (d*g). Geordie (actually a lovely dog) is a miniature collie; Sug was a stray kitten who’s now 13 and lost her ears to cancer. Don and Karen were both teachers at the local school, but now Don does various biology projects (we went one night looking, fruitlessly, for long-tailed bats), helps with the local school, and tends the plants on the property; while Karen tends the sheep and chickens and produces a variety of products for natural therapy and organic skin care called Five Elements (her website is here). 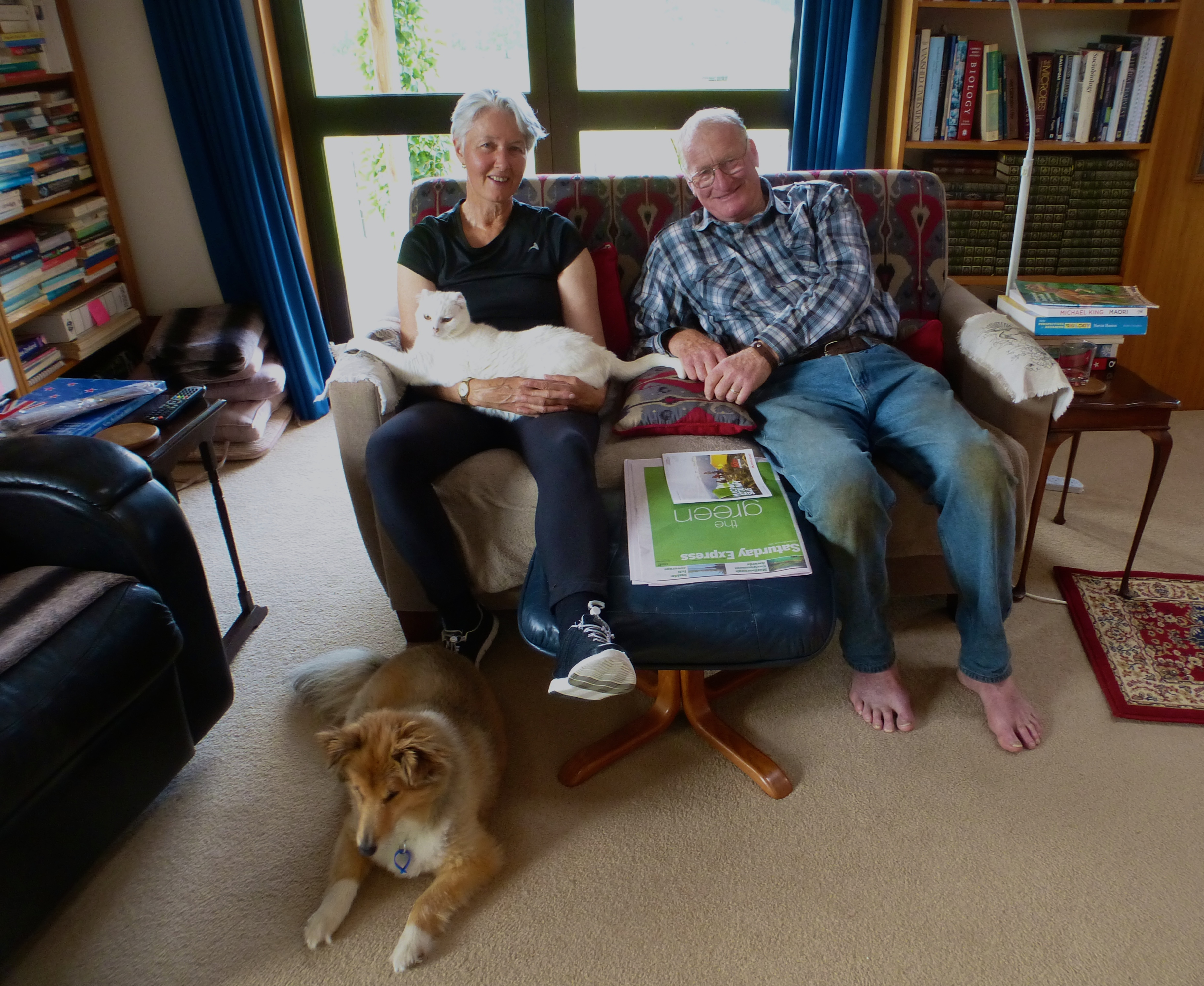 Sug! The first picture is on her hind legs with tongue sticking out. Note that Sug is “Gus” backwards, and is also an earless white cat. Things are reversed in the Antipodes: 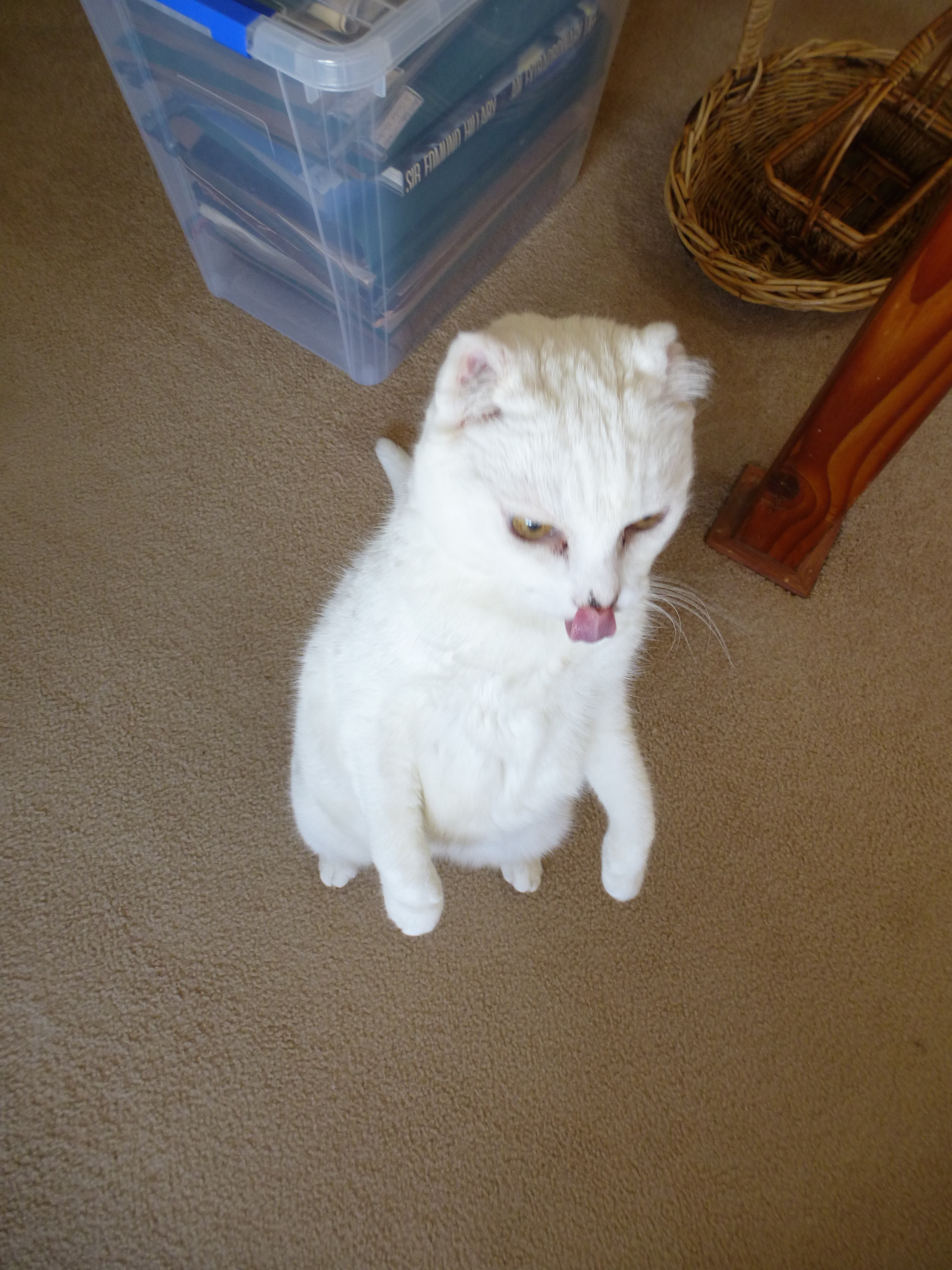 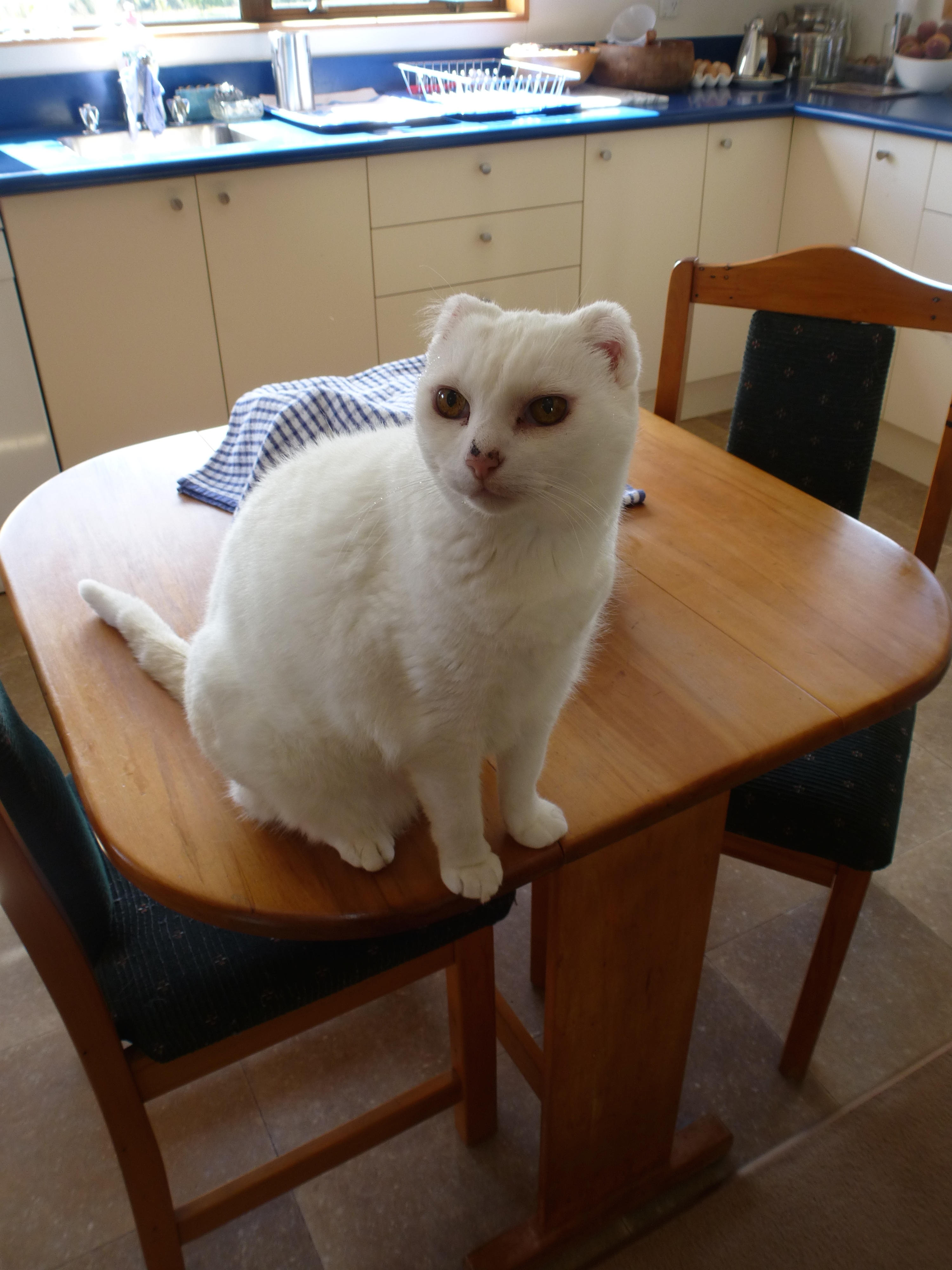 I get my cat fix: 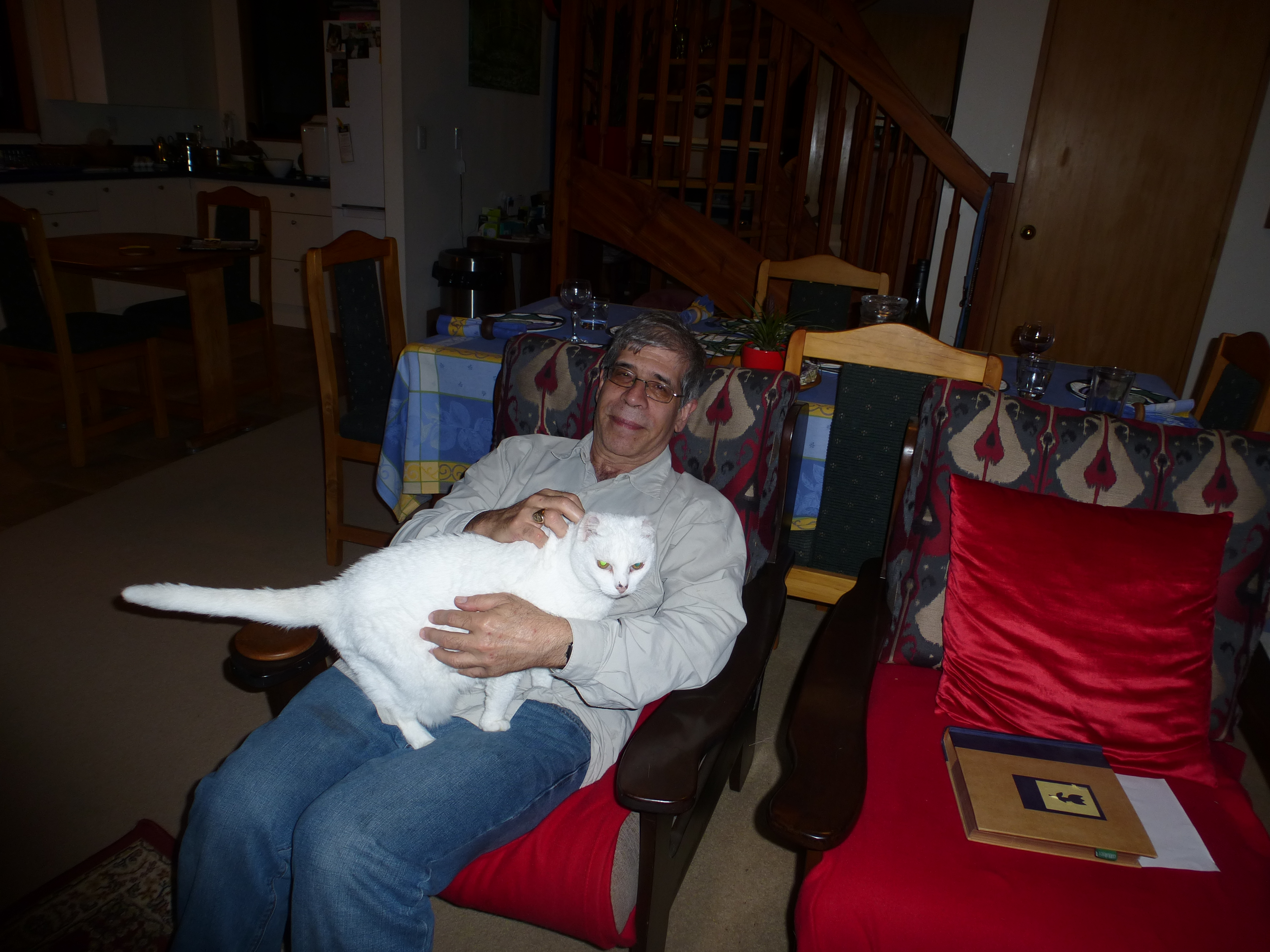 The MacKay holding; there are 3.5 acres, twenty sheep, and eight chickens. 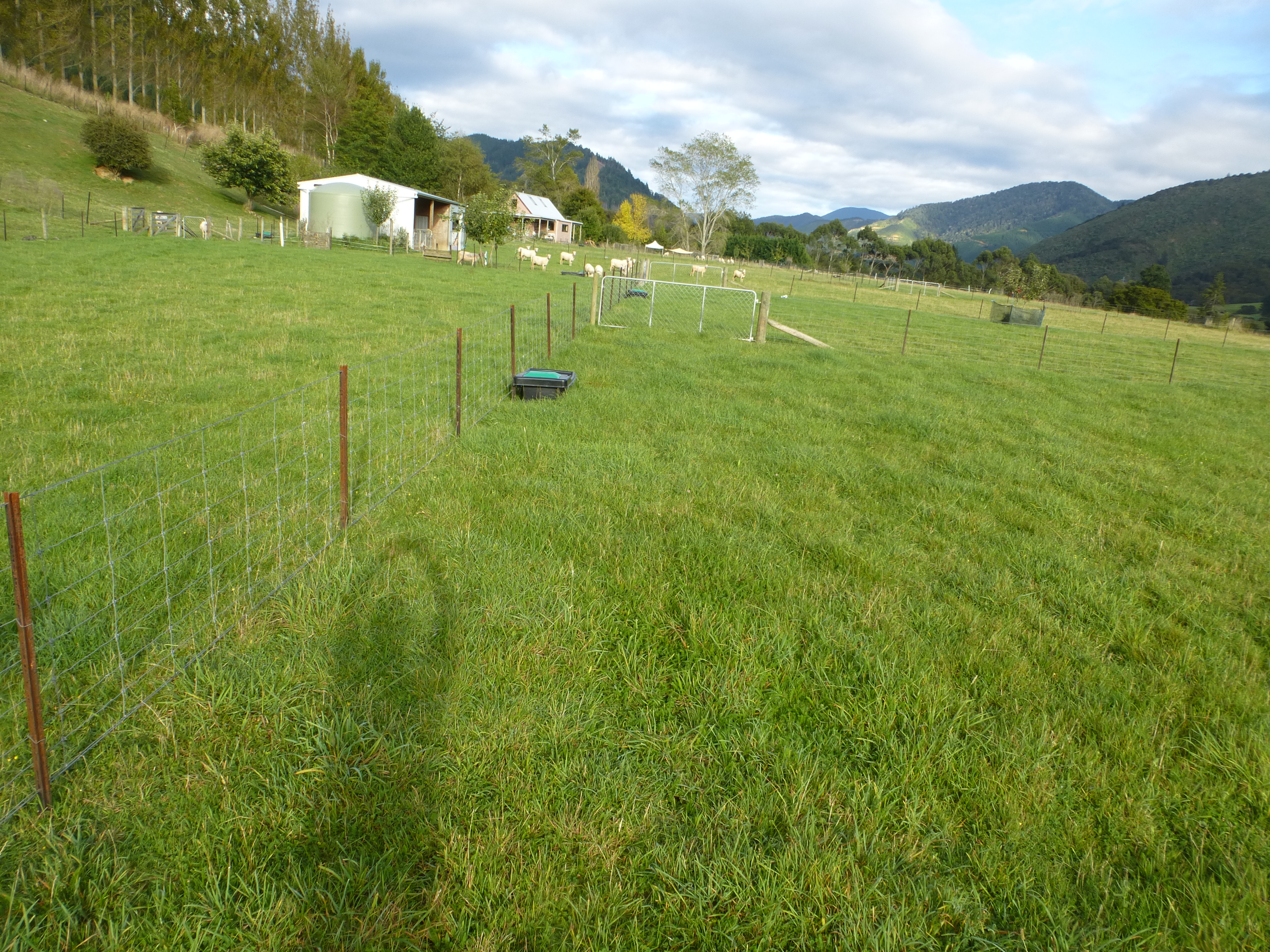 Karen and a ewe: 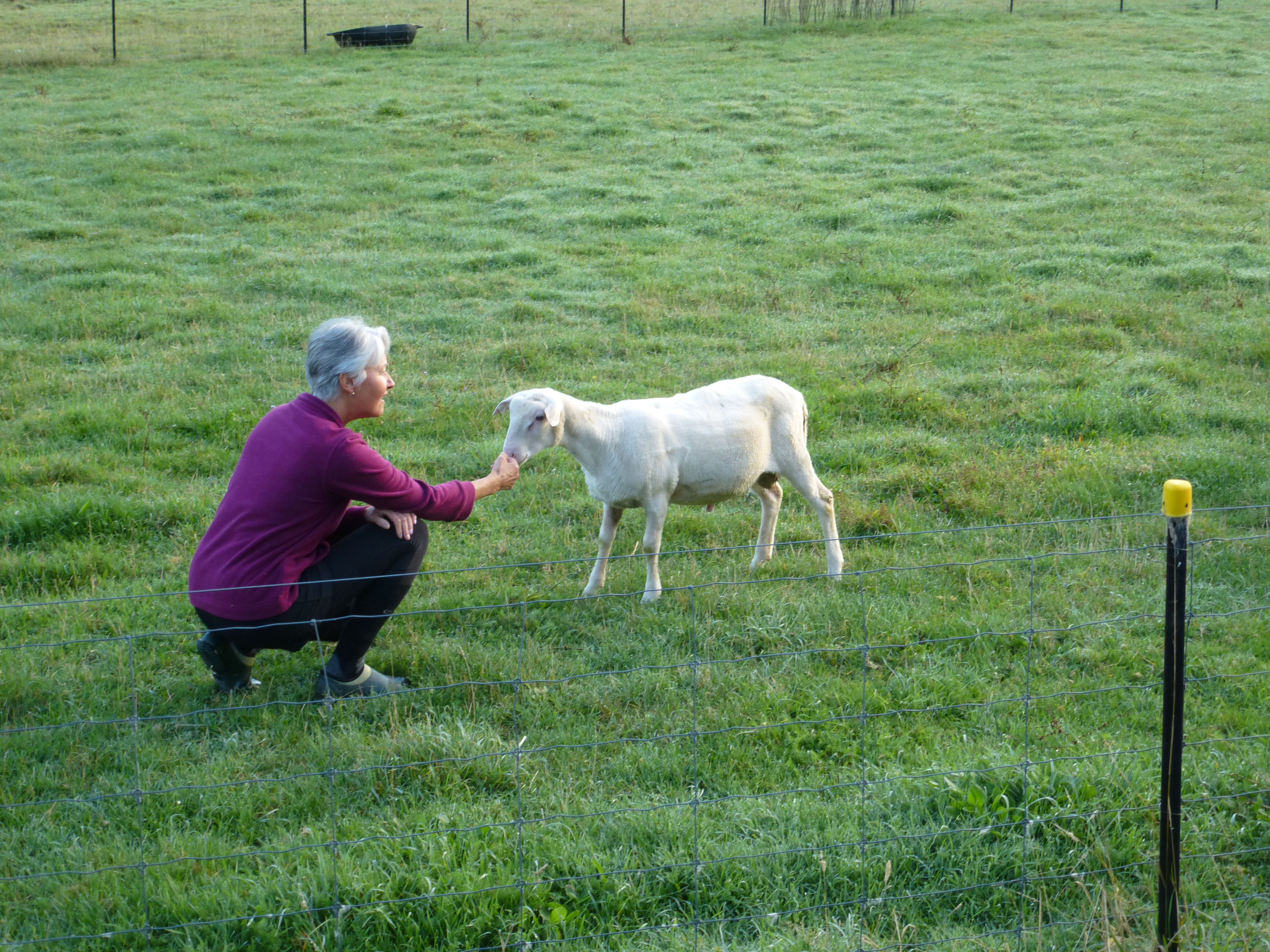 Don playing bagpipes. He’s very good, having played since he was a wee bairn. These are his grandfather’s pipes, over a hundred years old. They’re made from silver, ebony, and ivory: 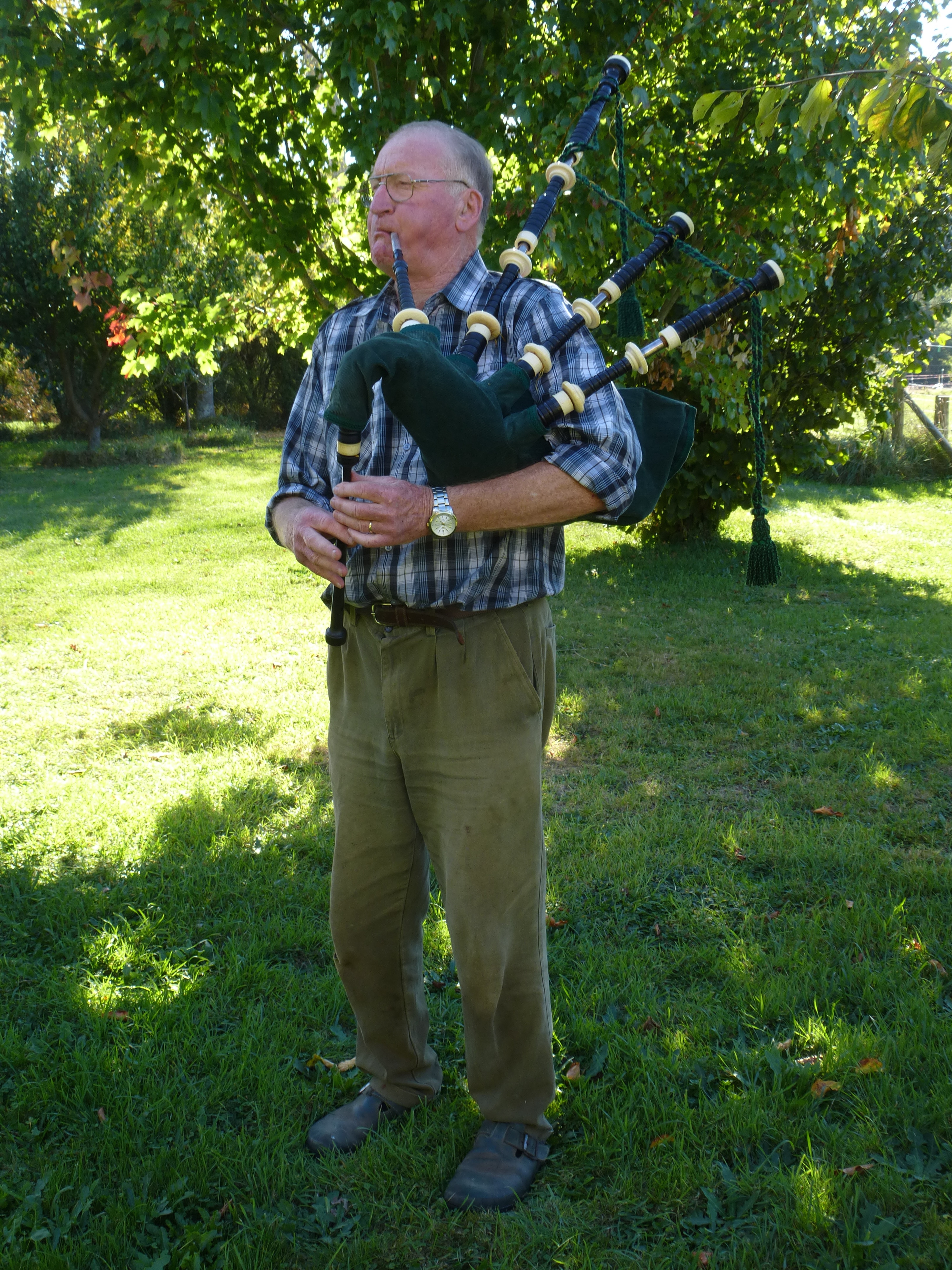 We had a fantastic homemade feast last night: a huge pie made from wild pig, apples, peppers, and many other things, roasted yams, ears of corn, and broccoli—all washed down with a local Pinot Noir. Dessert was a homemade apple cake with ice cream (ice cream in NZ is of very high quality) and whipped cream. 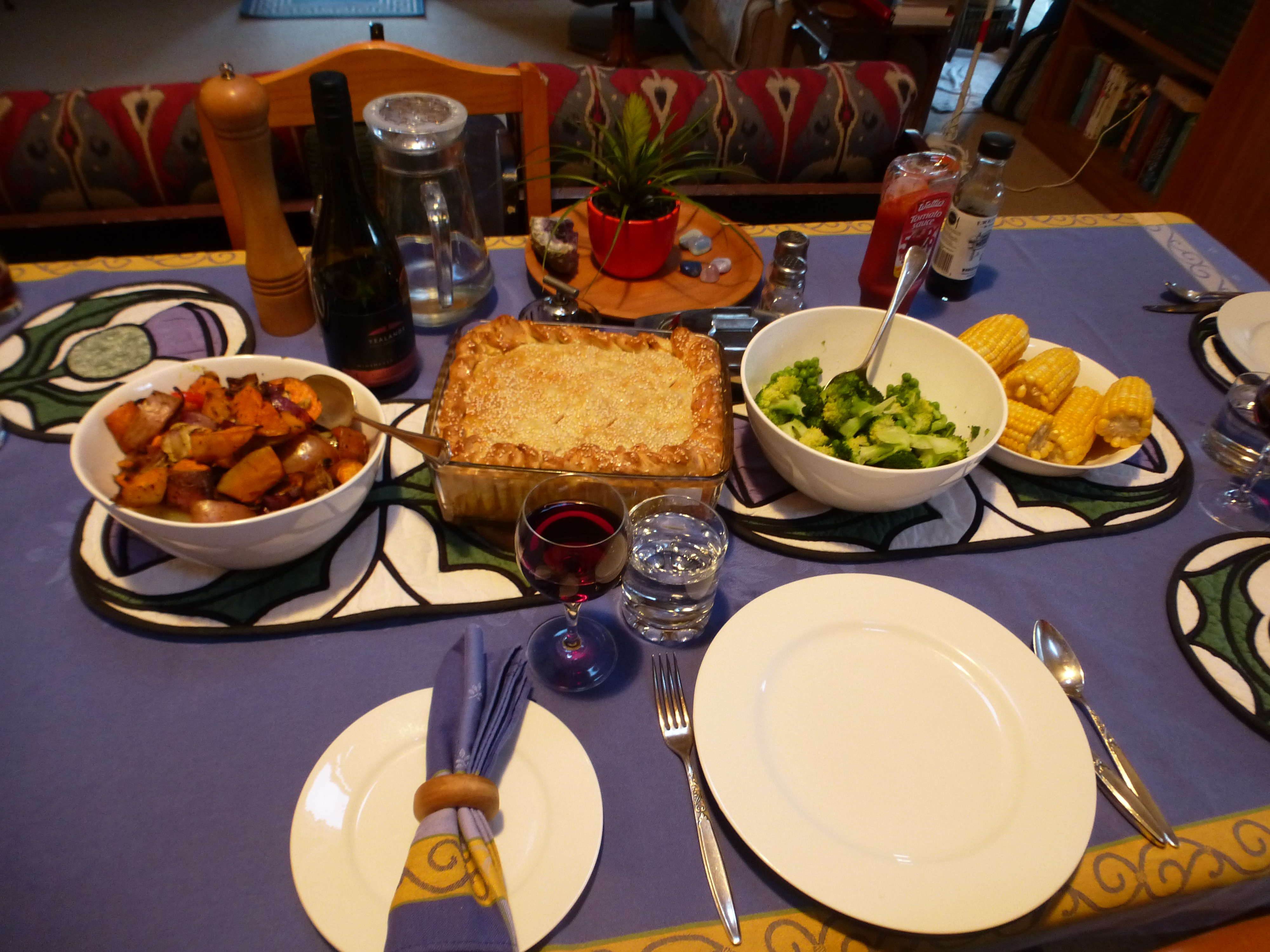 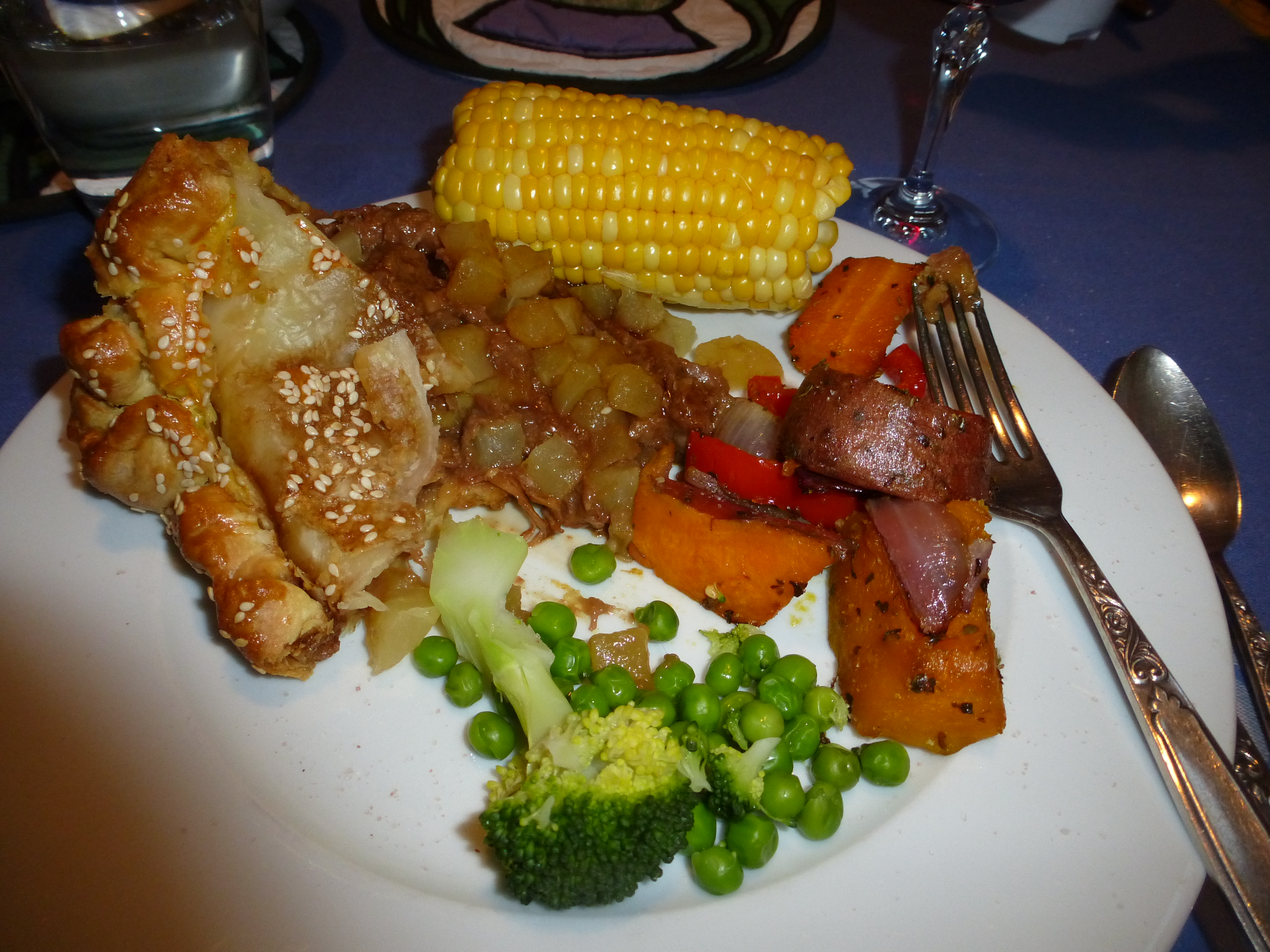 Tonight we’re going out to dinner tonight for a feast of local green mussels.

Effusive thanks to Don and Karen for their over-the-top hospitality and to Don for his natural history wisdom.